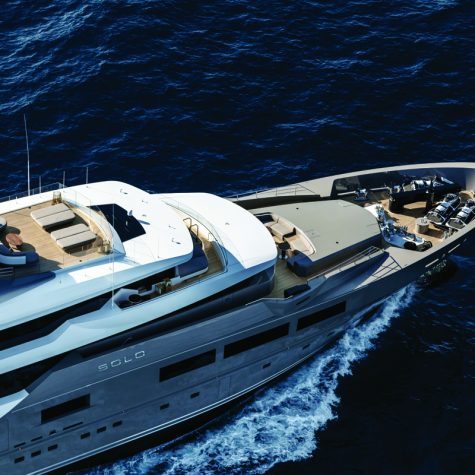 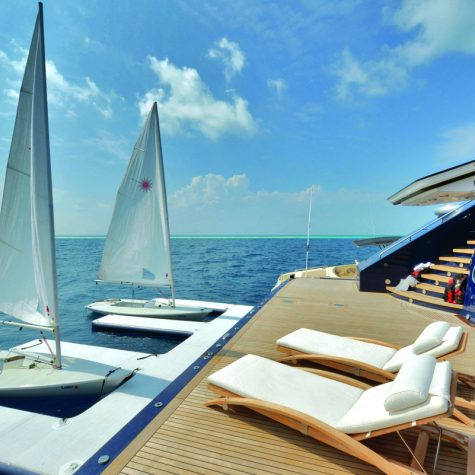 Earlier this year, Latvian-based firm Latitude Yachts debuted its largest and boldest superyacht concept yet: a 751-foot long floating entertainment hub called Valkyrie. If built, it would shatter the current superyacht record, which stands at 591 feet. Designed to be open to the public, the Valkyrie could house 52 guests in 26 cabins with 92 crew members in 46 cabins. Valkyrie represents not just another pie-in-the-sky idea from an ambitious designer; it serves as a bellwether for where the superyachting world is going. And it is going big. Add an increase in water sports activities and modern touches like glass-oriented designs and eco-friendly features, and you’re beginning to formulate a picture of the future superyacht. 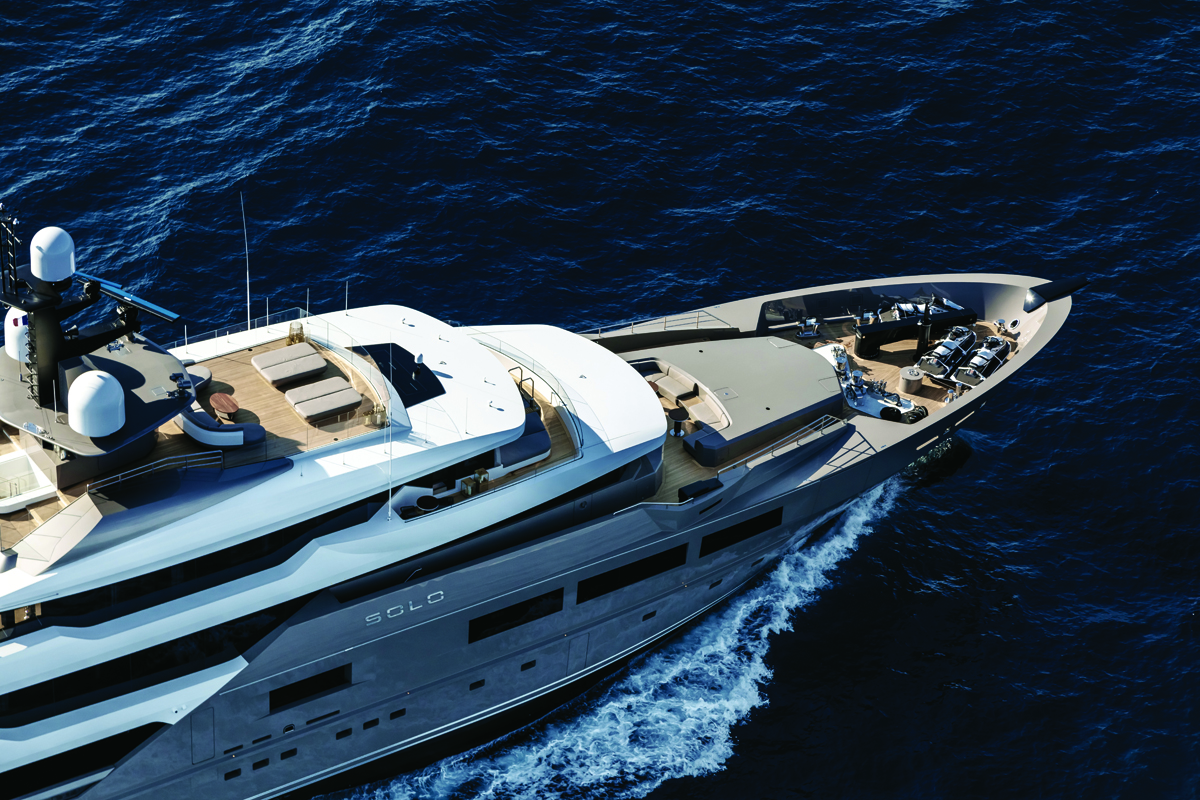 “Consumers are driving these changes,” says Daniel Ziriakus, chief operating officer for Northrop & Johnson. “Yacht owners are getting younger and there are a lot more people who can afford the products. The world is changing, and the interest in yachting is growing.”

Homes & Estates recently spoke to Ziriakus, along with Richard Lambert, head of sales for Burgess Yachts, to uncover the major superyacht trends steering the yachting world in 2019 and beyond.

“The use of yachts is changing,” says Lambert. “There is an increased desire to be closer to the water and have the experience of more interaction with the ocean and what it has to offer.” Expect this trend to bear out in amenities like beach clubs and nemo lounges, which are typically situated closer to the water as opposed to higher on the sundeck. “The experience of being onboard is also changing, with the younger clientele being more focused toward water sports activities,” adds Lambert. 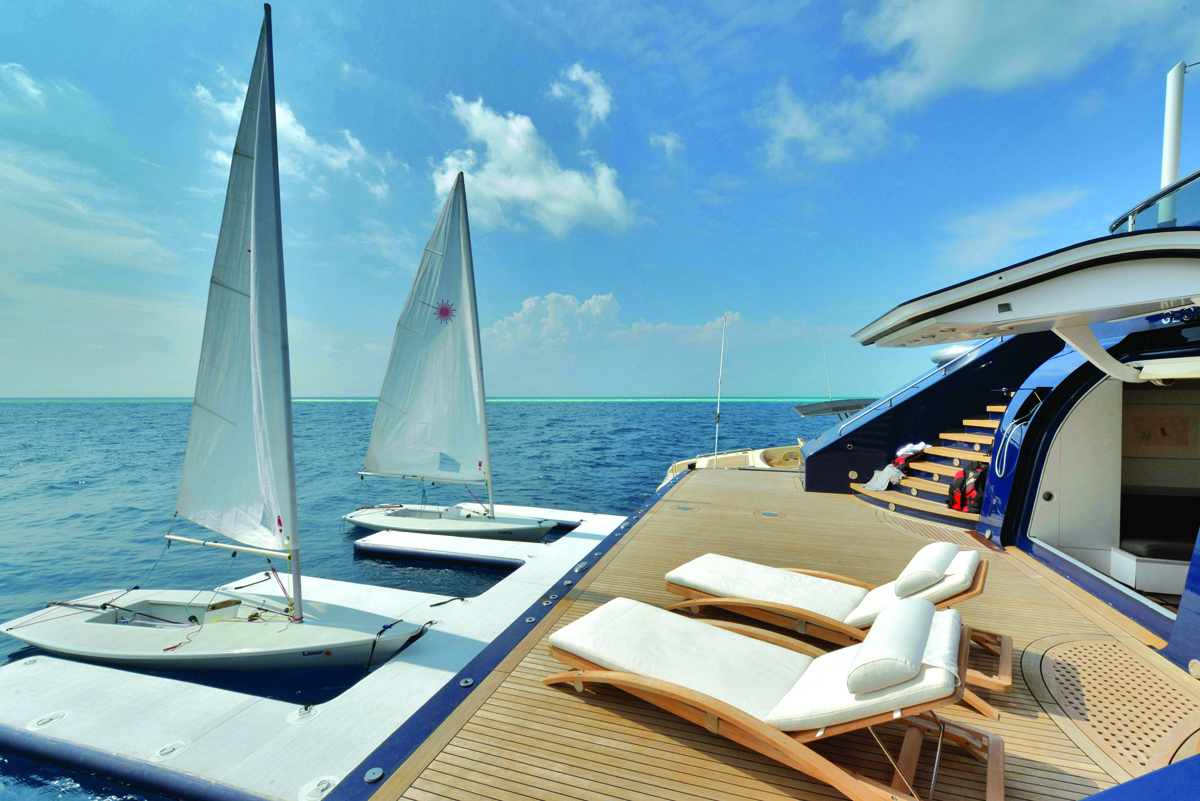 Ziriakus agrees, noting that the main point of design exploration will be “the interior vs. exterior of a superyacht, and how to marry them both in the most effective way.” Deck spaces will get much larger, and many of these new yachts will play with the gamut of water toys offered onboard. “When it comes to toys, it’s pretty much up to the owner’s liking,” he says. “Inflatables are popular, and we have seen some yachts with slides and little floating islands that you pump up. In terms of power toys, there’s the traditional jet skis, but you can also have your own underwater sea pod, jet surfboards, electric scooters for land exploration and even jet-powered flyboards that shoot you 10 feet in the air as you hover above water.”

This trend is really being driven by younger clients, points out Lambert, “who are looking toward more experience-based use of yachts with watersports and multigenerational cruising” opportunities. 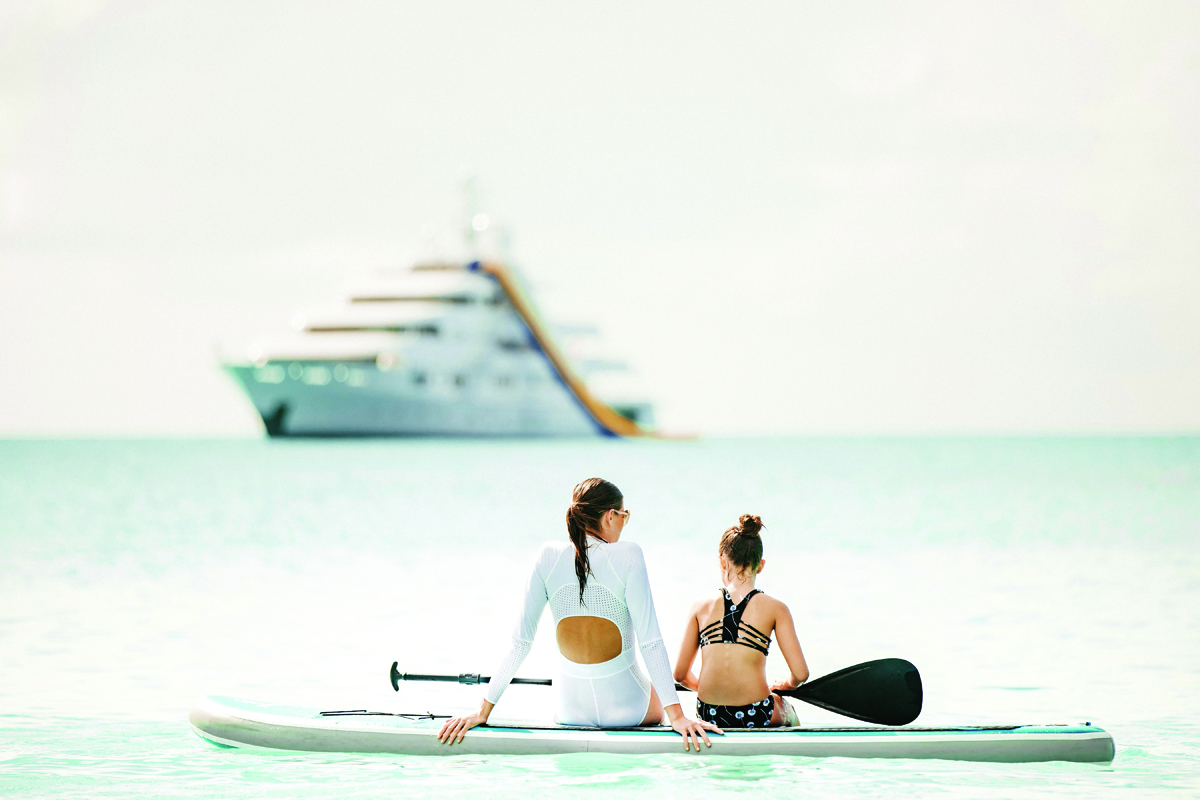 2. Through the Looking Glass

New yacht owners are also demanding greater connection to the outdoors through the use of glass. They want unobstructed views from interior areas. The desire is to “bring the beauty of the environment closer to those onboard,” says Lambert. Expect to see more viewing platforms and greater indoor/outdoor connectivity in future iterations of superyachts. The glass trend parallels the more general trend of yachts shifting toward contemporary design. “The entire space is getting more modern,” explains Ziriakus. “If you look at a brand new condo in New York or Miami, interior design has moved toward more open layouts and more glass. The yacht sector is mimicking that now. Yachts are incorporating floor-to-ceiling windows so there is less of a boundary between the interior and exterior.” 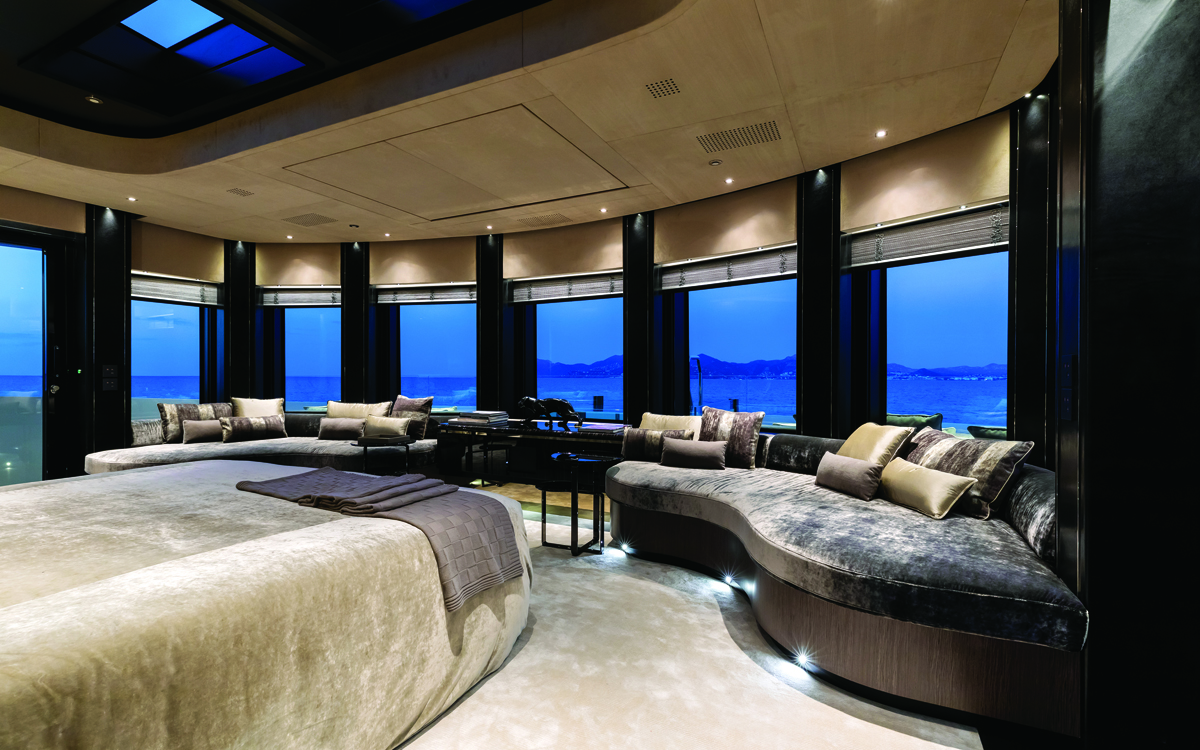 By nature, commandeering a 100-plus-foot yacht across the world’s oceans is not an environmentally friendly endeavor — but both Lambert and Ziriakus agree that there has been a move toward greener technologies and conservation onboard in recent years. Lambert points to incremental changes happening in the interiors that are designed to reduce impact on the environment. Filtered water taps are now bringing fresh still or sparkling water to refillable bottles to reduce the amount of plastic being used onboard. The recycling of heat from exhausts into heating water is becoming more commonly adopted on many ships. There are also better filtration systems.

Some yacht owners are adding solar panels. “These measures are aside from the propulsion system changes that we are seeing being adopted in yachting,” Lambert says. When it comes to propulsion systems, technological advancements in electric engines have gained momentum in recent years.

“The developments in the yachting world can be compared to the developments happening in the automobile market,” says Ziriakus. “If F1 racers can be hybrids, then why not superyachts? Some yachts are already going hybrid diesel-electric or have fully electric engines. More and more yards are moving into this field as well. Sometimes the hybrid systems can drop fuel consumption by about 20 to 25 percent.” 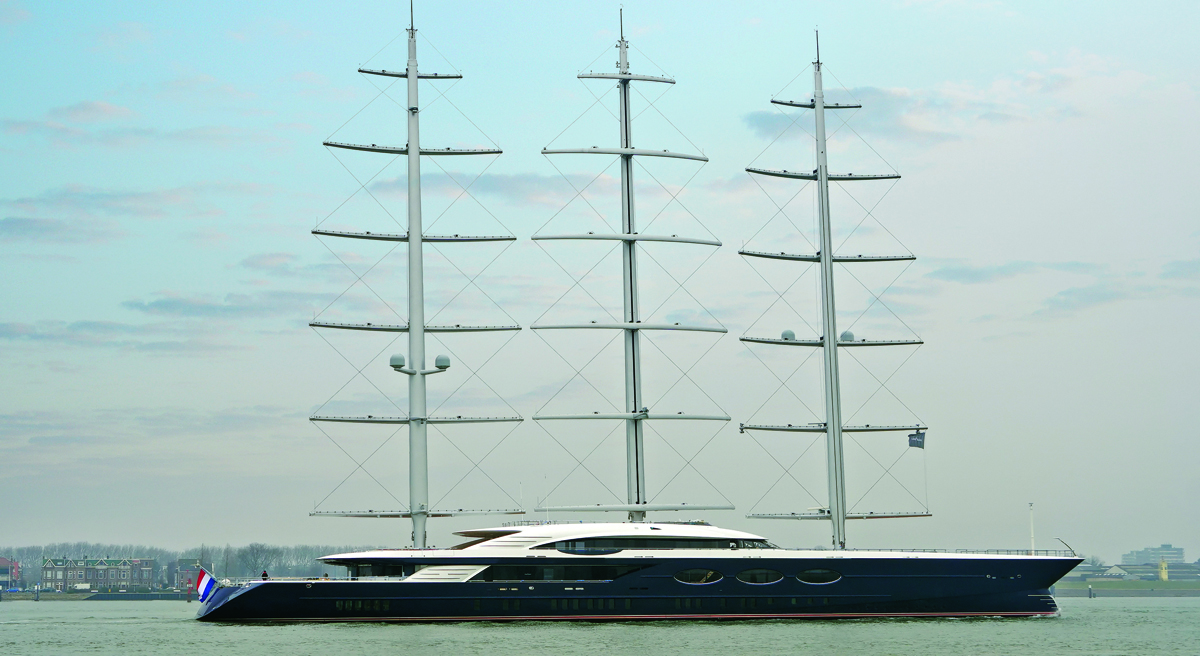 Oceanco’s Black Pearl, which won a prize for Best Naval Architecture for Sailing Yachts in the 2019 Boat International Design & Innovation Awards, is one example. The 350-foot, three-masted sailing yacht reportedly has a hybrid diesel-electric system and waste heat recovery, making it one of the most fuel-efficient superyachts ever — capable of traversing the Atlantic without burning any fuel. Northrop & Johnson also charters a 236- foot superyacht called SOLO by Tankoa Yachts — winner of the 2018 RINA award at the Monaco Yacht Show, which honors superyachts that have been constructed to environmental standards. Also hailed as one of the most efficient yachts ever built, SOLO is equipped with main engines that have emissions-reducing Eco Spray SCR (selective catalytic reduction), a CO2 monitoring system, HUG soot burners to eliminate any black smoke stain on the sides of the hull, and more. 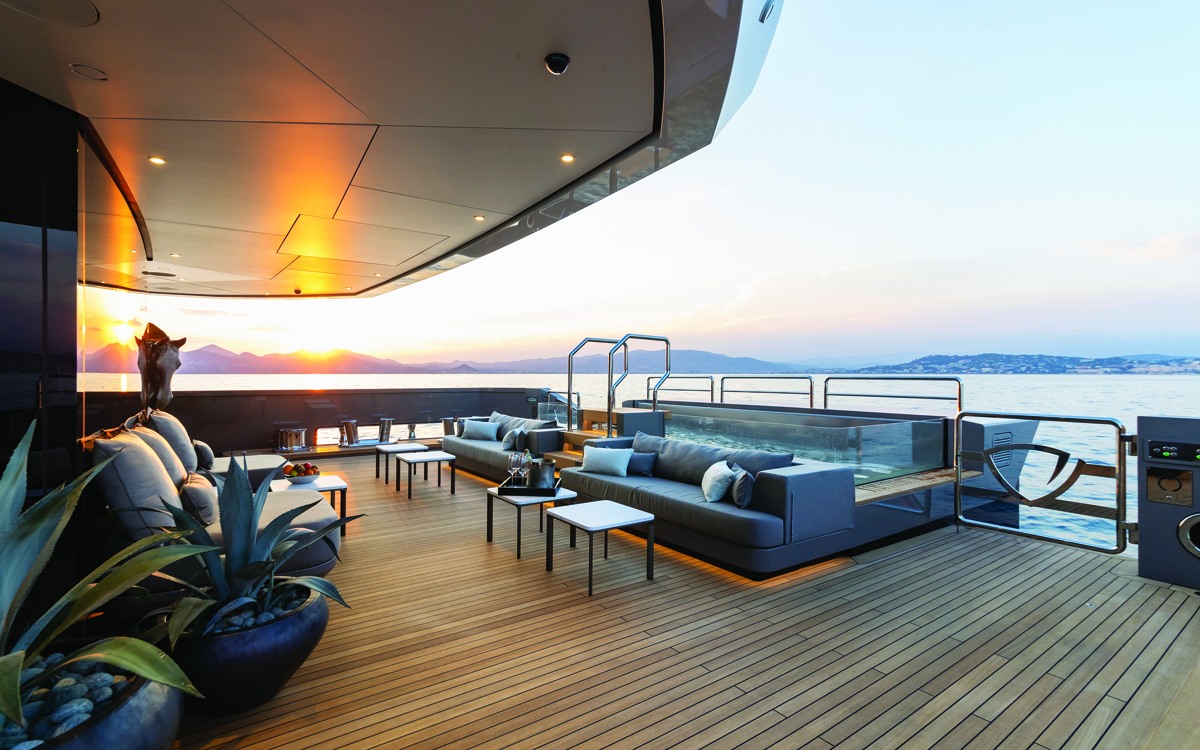 “SOLO is so efficient that at a speed of 10 knots, she only burns 195 liters per hour with one generator running, giving her a range of 7,000 nm, enough to get from Monte Carlo to Cape Town without stopping,” says Ziriakus.

At some point, Ziriakus expects to see all-electric yachts surpass traditional fuel in terms of power: “It might be 20 to 30 years away, but you are going to see such high-efficiency batteries powering yachts as well as cars.”

In addition to advancements in propulsion systems, the design of the yachts themselves is increasingly focused on maximizing fuel efficiency.

“A bigger focus is also given to the shape of the hulls in order to become more efficient, meaning less power is needed to move the vessel forward,” notes Ziriakus.

Following the trends in the residential market, yachts are becoming fully automated. In fact, home automation provider Crestron has been making a splash at major yachting shows over the last few years. Crestron control systems can now manage everything from security and lighting to motorized blinds and shades created specifically for superyachts and to audio and entertainment, among other technologies. They also integrate with onboard navigation, communications and environmental control systems, with control options spanning from touchscreens to recently launched Horizon keypads and Alexa voice control. Crestron’s DM NVX™ Series also offers one of the most secure, high-quality and space-saving AV-over-IP solution on the market for streaming content from movies to TV.

“Automation is a big deal,” says Ziriakus. “Everyone wants to control everything from their iPad or iPhone, and the boats are adapting very quickly as Wi-Fi capabilities continue to improve.”

Yachts of the Future

Yachts of the Future