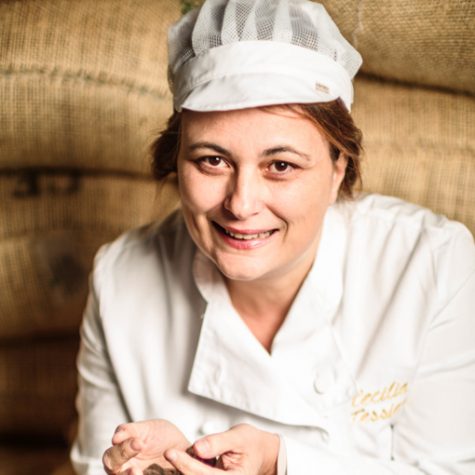 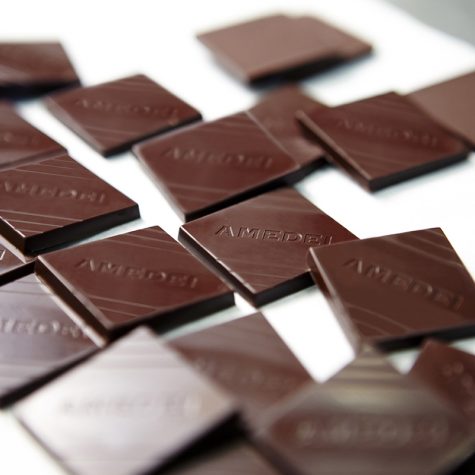 The machinery is vintage, time-tested, certainly not timeworn. Where it may lack the shine of more modern equipment, it drips with more than a century of tradition and inspiration. This circa-early 1900s roasting machine is a defining feature of luxury chocolatier Amedei’s Tuscany, Italy factory because it represents the foundation of the company and the passion of groundbreaking Master Chocolatier Cecilia Tessieri. Tessieri was of the first female master chocolatiers in the world and has established herself as a force in the world of luxury chocolate as co-founder of Amedei. 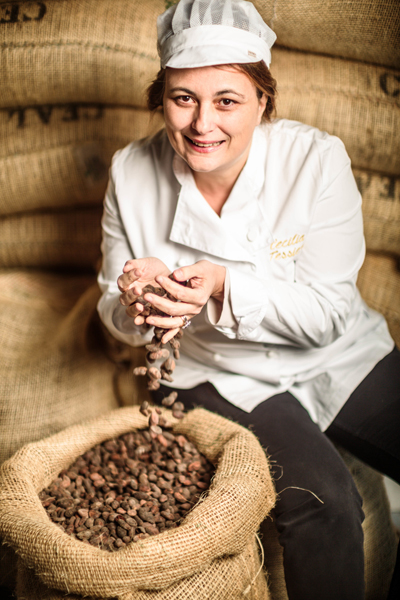 “Maitre Chocolatier Tessieri believes this machine is better for quality,” said Alice Tesi, Brand Manager of Amedei. “She doesn’t want to go fast; she wants quality. Time and temperature are our secret. The beans from Jamaica need a different time and temperature than those from Madagascar.”

Farther down the production line, the chocolate is conched and refined, a process that gently blends in the cane sugar and vanilla, further developing the flavor and smoothing out its texture over a full 72 hours in another vintage machine—this one from the 1800s. Eight hours is more typical to this process, and a high-production chocolate like you might purchase on a whim at the grocery store check stand might refine for only six hours. You can certainly taste the difference, which is, of course, the point.

Amedei, which began with Tessieri making pralines in a tiny workshop, has today evolved into one of the premier luxury chocolate makers in the world, and is the six-time winner of the Academy of Chocolate’s “Golden Bean” award (the equivalent of the Academy Award for chocolatiers, she says). At a time when the luxury chocolate industry is growing—the latest report by Technavio on the global premium chocolate market predicts a compound annual growth rate (CAGR) of about 7% over the next four years, partly driven by an “increasing indulgence market,” according to Businesswire—high-end chocolatiers like Amedei continue to thrive, even while keeping production facilities and traditional processes intact and maintaining exclusivity with only a select number of purveyors approved to sell their goods.

The success is due to a combination of factors but can be nicely paired down to one short statement: “from bean to bar.” That refers to the fact that the company makes chocolate from the cocoa bean, but also to Tessieri’s meticulous oversight over every aspect of chocolate production at Amedei. All of the company’s chocolate is produced on site in their Tuscan headquarters, but the chocolate-making process starts long before that. Tessieri has traveled worldwide to find the right beans that meet her high standards. Beyond the initial selection, there are five different quality control tests, and only one percent of the beans harvested is deemed worthy to become an Amedei chocolate. (What’s not usable to sold to other companies for fertilizer.) 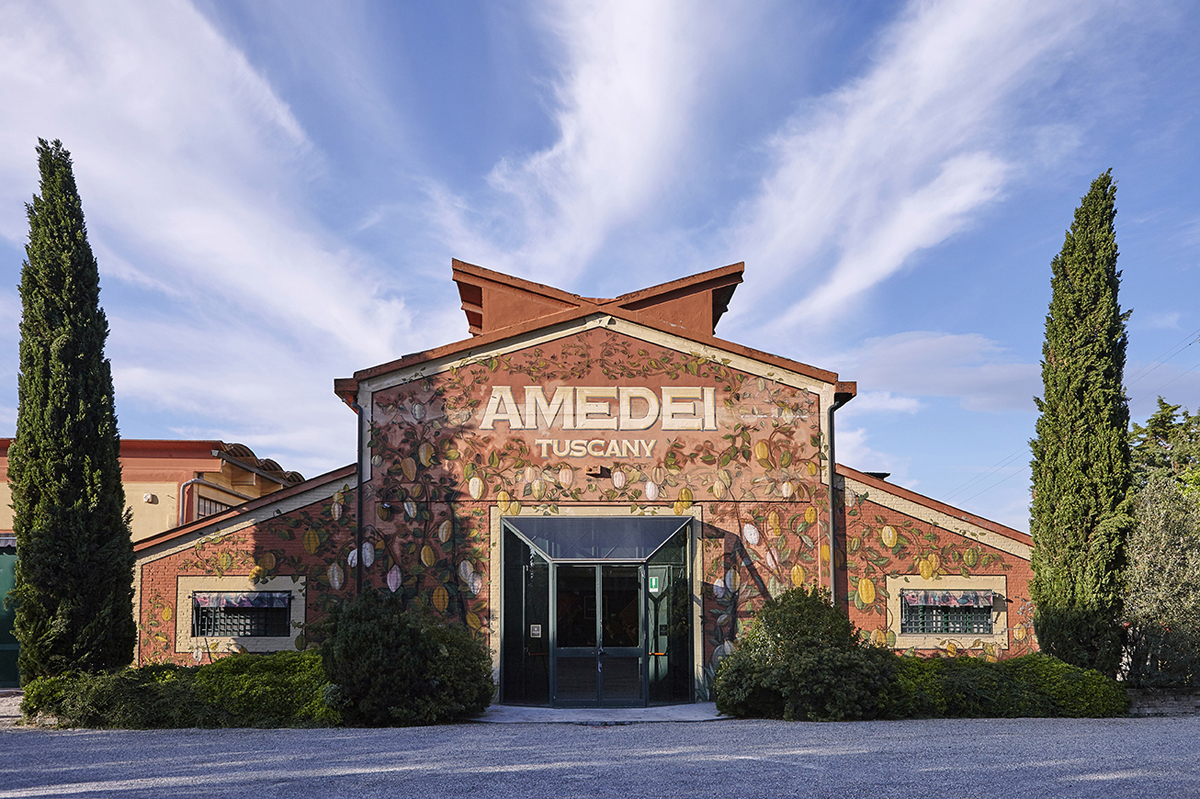 “At Amedei, I created the entire production process chain from the cocoa seed to the realization of the chocolates, adding my creativity to everything I had learned in my various years of study,” said Tessieri. Those cocoa beans are sourced from plantations in places like Venezuela and Ecuador and Jamaica and Madagascar, with Tessieri personally inspecting each bean. Those that pass the quality assurance tests are roasted in that vintage machine—manually. Further down the production line, you can also find hand-rolling (by real, live people!) of truffles—more of that personal Amedei touch, literally.

Those truffles are one of many products produced by Amedei today. The company that was officially founded in 1990 by Cecelia Tessieri and her family, and named for their grandmother, produces 12 different dark chocolate bars (“Because different regions produce beans with different flavors and aromas,” she said), premium milk chocolate that was created for Tessieri’s grandmother, white chocolate products, and chocolates featuring additions like locally harvested almonds and hazelnuts, which are also roasted onsite. 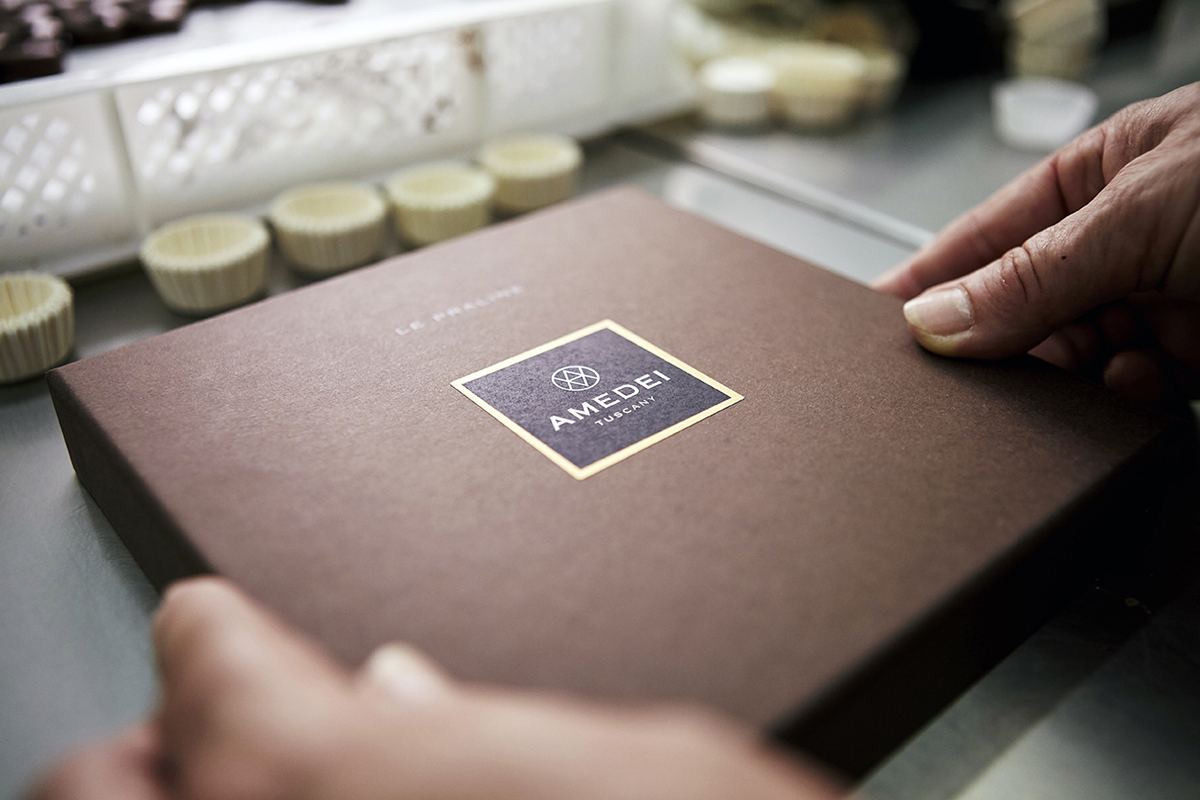 In honor of World Chocolate Day on July 7, Coldwell Banker Global Luxury had the opportunity to tour the Amedei factory, observe the chocolates in various stages of production, taste everything from cocoa nibs to chocolate hazelnut spread to those hand-rolled truffles, and learn from Tessieri herself about what sets Amedei apart and what it means to succeed in what has long been a man’s world.

How did you first get into chocolate-making?

I started making chocolate for a family project. We decided about 25 years ago to undertake the study and processing of cocoa at a time when we knew very little about cocoa and chocolate, and then began to explore a new world that was full of surprises. I approached the chocolate world with a lot of curiosity, but also with a lot of humility. I studied in Europe and then directly by working in some factories and in some small laboratories and chocolate companies.

How do you go about setting the recipes every year for Amedei and what factors affect the recipes you create?

The recipes of Amedei are still, today, those that have been created over the years. The cocoa beans every harvest are selected under strict control and only the highest-quality beans are processed at Amedei. Our philosophy is: Quality without compromise.

The new recipes are borne according to this precise idea and always stem from a good study of the market and the desires of our customers and future ones. 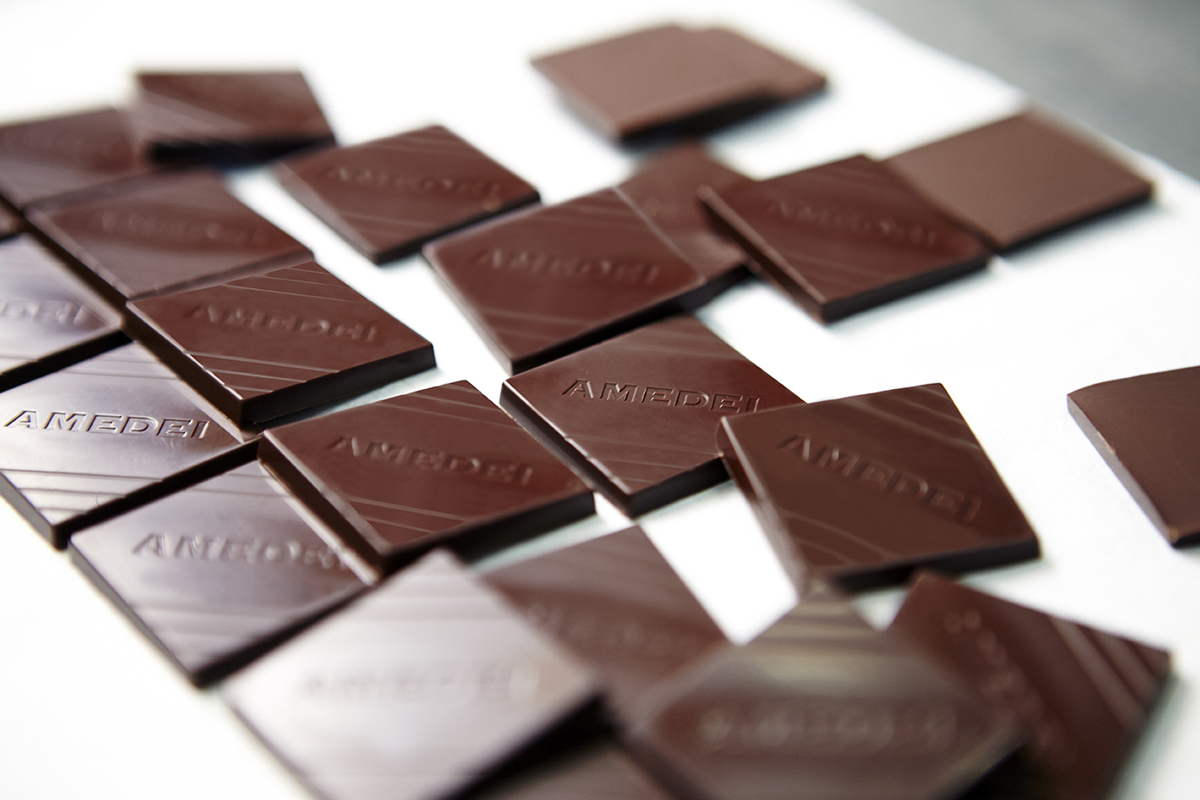 Do you have a favorite recipe or product that you have created, and why?

Each chocolate I have created provides indelible memories and carries with it a unique set of emotions. One of my favorite products is the chocolate Toscano Black 70 because it is the first chocolate I created, and this year it turns 20 years old. (The anniversary of this first Amedei chocolate will be celebrated with new packaging later this year.)

How would you say Amedei chocolate differs from other high-end chocolates? Is it about the products themselves or about the passion behind them?

I believe that Amedei chocolate is different for a few reasons: The selection of cocoa at the origin and the selection of all the other raw ingredients; also, the particular process where the machines help to validate the organoleptic part of the various chocolates. Certainly, the creativity behind the chocolates is very important. Working with passion is definitely essential in distinguishing ourselves and to create, in my case, iconic chocolates that people appreciate all over the world. 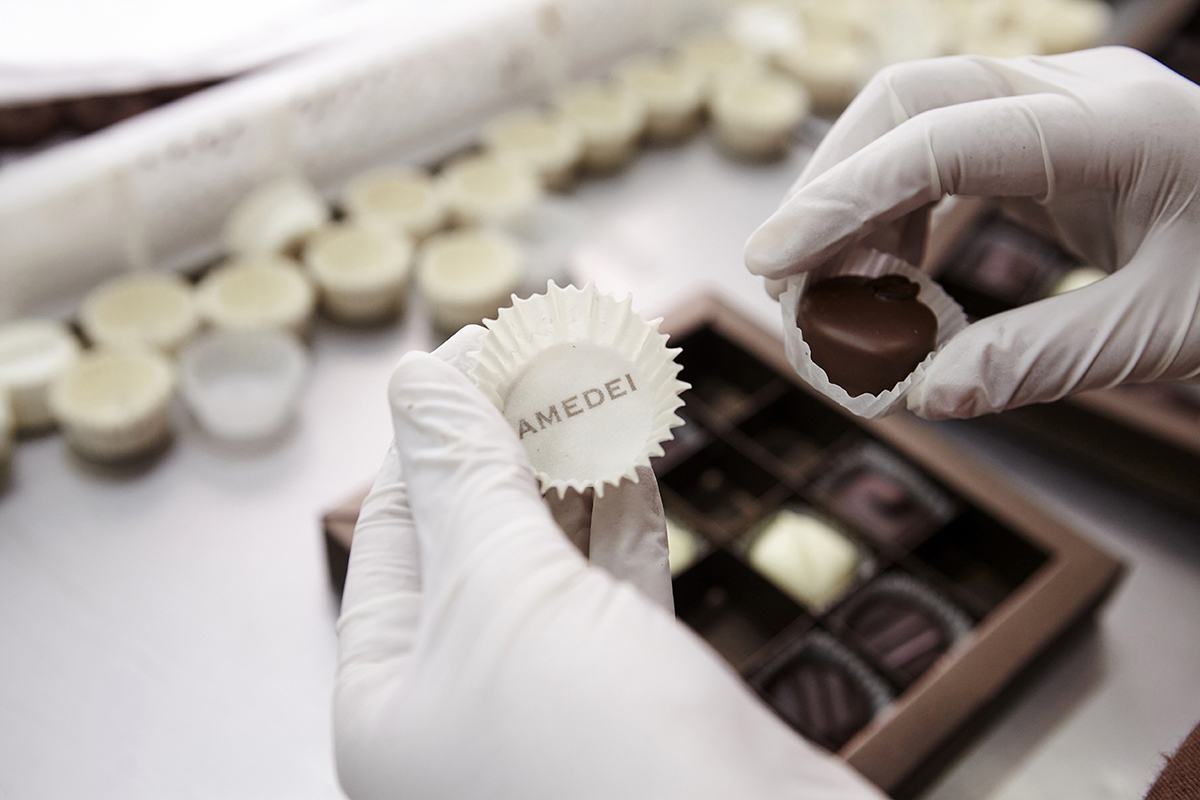 I know there are now Amedei stores in Hong Kong and New York. Are there plans for further expansion?

We are looking in the Italian and foreign markets, and certainly the possibility of having Amedei stores is one of the projects we will developing in the next few years.

You are involved from the very beginning of the chocolate-making process, from selecting the beans at the plantation to creating the recipes. What inspires you to be so hands-on?

My inspiration derives, surely, from being a person who loves to do and discover new things but also from the fact that my route was a great challenge. In founding Amedei and becoming involved in chocolate making, I knew I was taking on ever-more-difficult goals and challenges. Women can distinguish ourselves in the world.

Is there a certain pride involved in being one of the first female Master Chocolatiers?

Surely, yes. Being a woman allowed me to express in Amedei chocolate a lot of femininity in a purely masculine product and also open up opportunities for other women to experiment and create dream products with a raw material as wonderful as cocoa and chocolate. 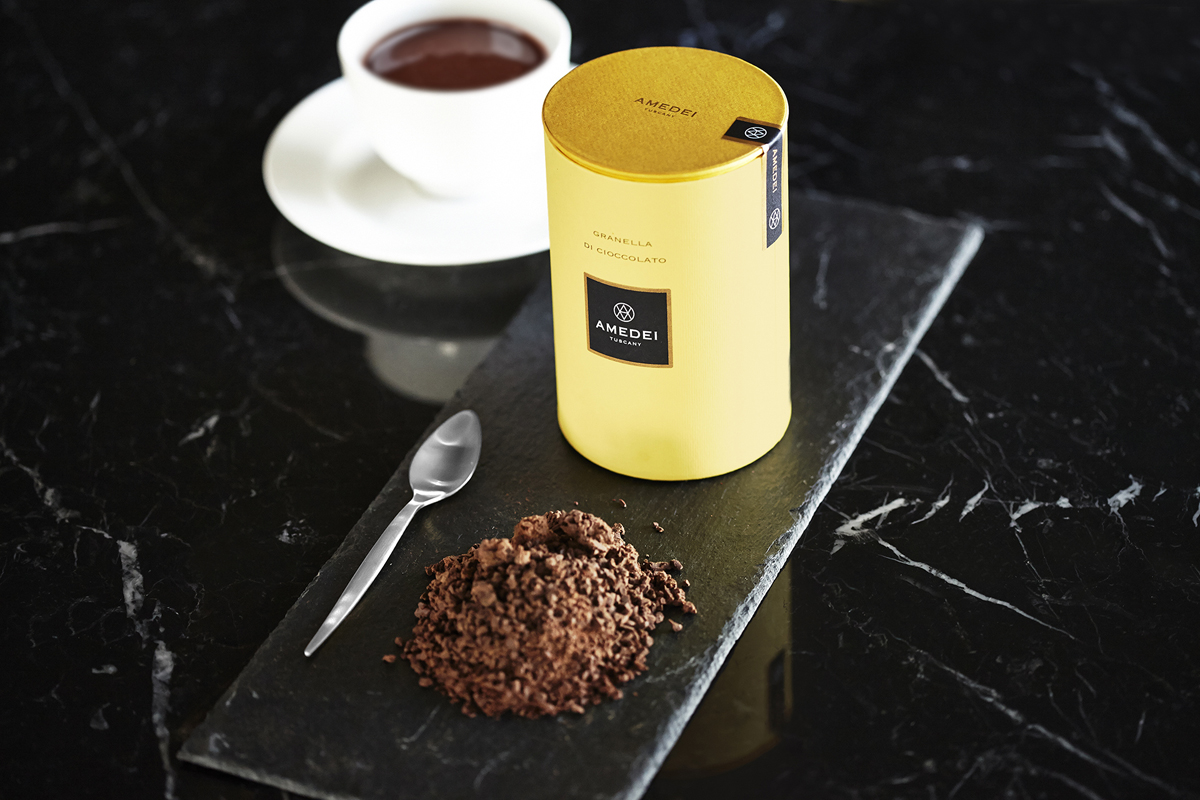 Why do you think there haven’t been any female chocolatiers to this point and do you expect that to change in the future?

Today, there are more possibilities to learn this profession, but, when I started around 26 years ago, it was a really small world in which men were the guardians of knowledge. I came in very soft, and then, slowly, I managed to make it clear how great my desire was to learn and express myself in the world of chocolate. I was lucky to find people who believed in me and, after much difficulty, to realize my dream to create a chocolate factory: Amedei.