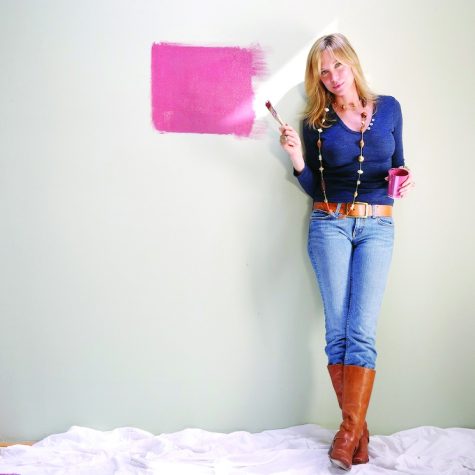 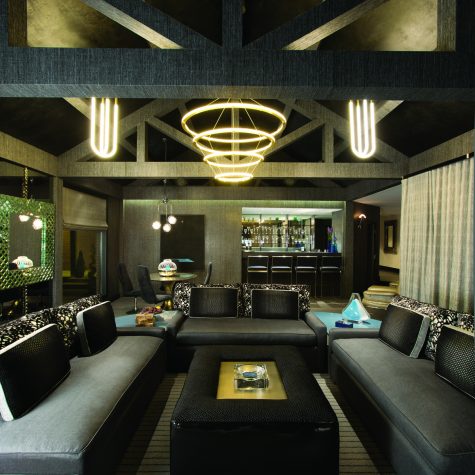 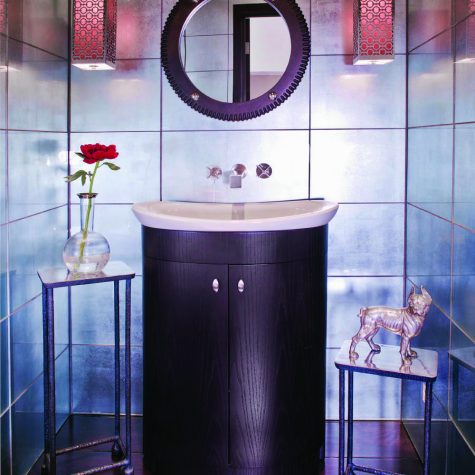 Kari Whitman is a former actress — her credits include NYPD Blue, The X-Files and Beverly Hills Cop II — who turned interior designer in a town where celebrity transcends every industry. While her clients include the likes of Jessica Alba, Don Johnson and Kristen Bell, her style balances approachability with sophistication and she has a weakness for accommodating four-legged companions.

In addition to serving her red carpet clientele from a home base in L.A., the designer scores high-profile residential commissions in New York, London, Texas, and her native Colorado, where she maintains an office in Boulder. Whether it is a penthouse in SoHo or a sprawling estate in Dallas, Whitman sneaks in fun, audacious elements into rooms that are otherwise quite refined. Some Whitman-authored spaces may border on conservative, but blasts of unexpected color and textures never allow them to be routine. 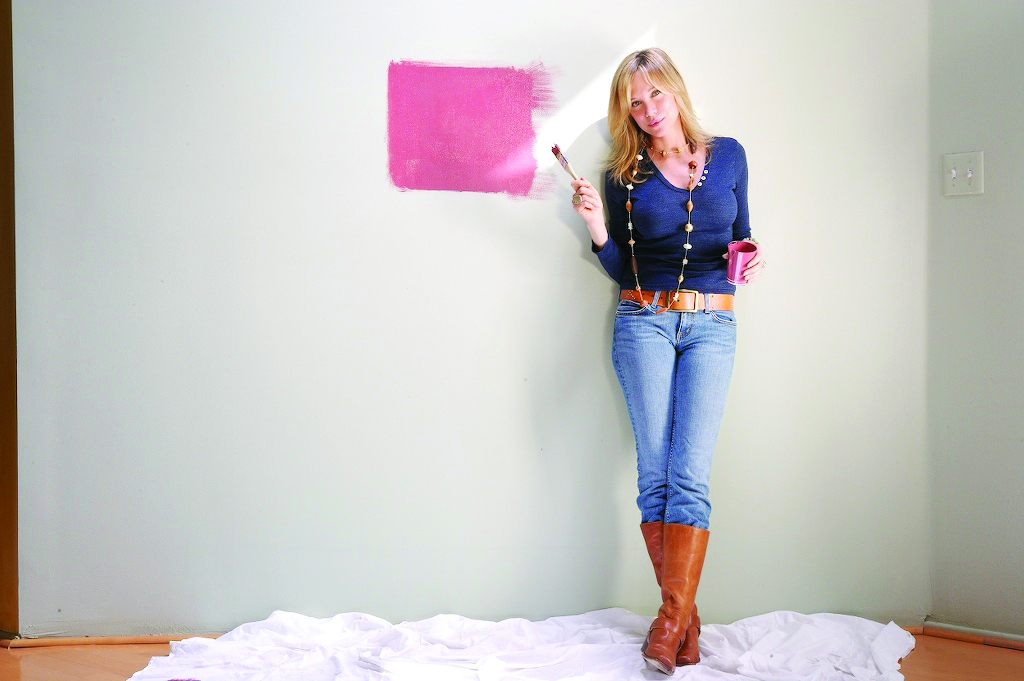 “I believe a good designer shouldn’t be limited to a single style, so I can’t say that I really have a ‘signature’,” says Whitman, who refers to her approach as “eclectic self-expressionism.” Explaining her fondness for adding salvaged or reclaimed pieces from her travels, she says, “They add time and wisdom to projects.” A passionate lover of nature, she also integrates green design wherever possible.

Noting she likes to introduce people to new horizons without making it about her, Whitman states, “I like to get into the heads of my clients and push them more than they would ever push themselves.” She is a designer that never likes to do the same thing twice, explaining, “I want visitors at a home to say, ‘Wow! I love this interior,’ not ‘Oh, this looks like a Kari Whitman design.’” She admires Philippe Starck for creating spaces that are clean yet comfortable, often whimsical, and for his leadership in the profession. “Designers should be trendsetters, not trend-followers,” insists Whitman.

Whether it is an innate talent or a residual skill from her acting days, Whitman is very good at reading people and picks up on their lifestyle preferences quickly. “If I can’t learn everything about them over dinner or drinks, I might take them to a museum or even go hiking with them,” reports Whitman, whose great inspirations are art and the outdoors.

“I may bring them some designs or pieces of art and ask them to tell me what they love and what they hate, and to throw out anything they’re neutral about,” says Whitman. “Personally, I like all styles of art, but am particularly drawn to very creative, radical street art, pop art and contemporary pieces,” she adds, citing Banksy, Peter Max and Keith Haring among her favorites. 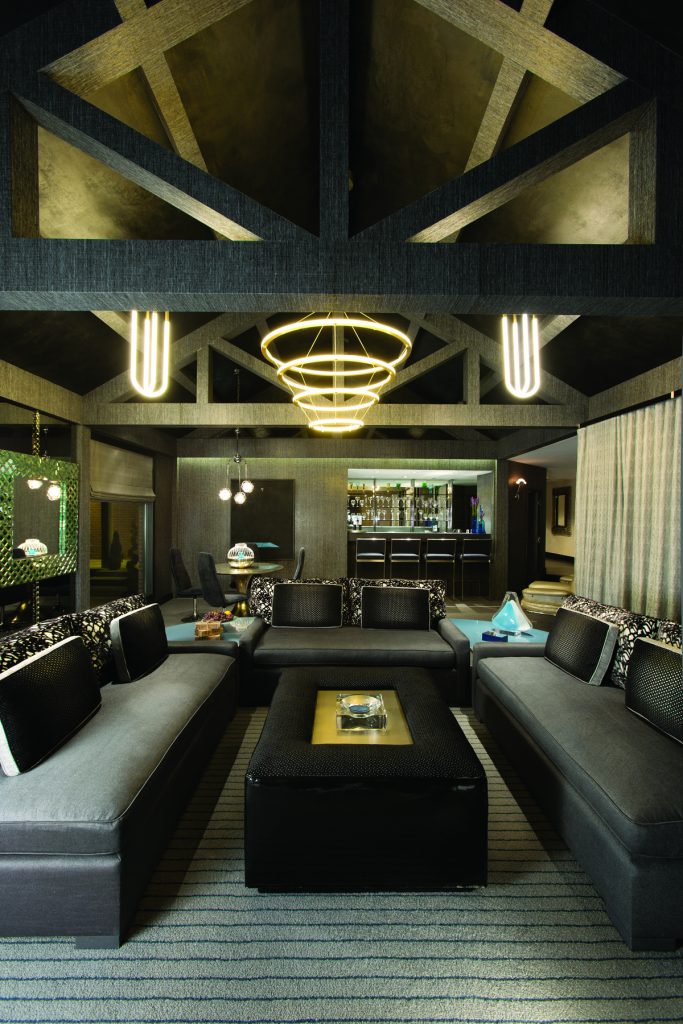 In a 43-room estate in Dallas owned by Saudi royals, Whitman was intent on making every space feel usable and comfortable. The breakfast room has been enlivened by a bold, dynamic image of a horse picked up at a swap meet in Dallas, and a piece featuring iconic fashion label logos. Hanging over a Milo Baughman table paired with Vladimir Kagan chairs is a glittering modern chandelier from a contemporary Paris designer, reinforced through a felt-clad ceiling (it is, in fact, French carpeting) whose sleek black, grey and sliver pattern suggests motion.

The walls of the entire home are an iridescent creamy-white — Whitman found her inspiration while consuming oysters at New York’s trendy Blue Ribbon restaurant — achieved through plaster, paint and shimmering effects. A neutral palette in one of the bathrooms is shattered by a spectacular orange Murano crystal chandelier, a vintage piece from the 1920s that was well ahead of its time.

For actress/entrepreneur Jessica Alba and her family, Whitman designed a very eco-friendly environment in the Hollywood Hills, consistent with the principles of The Honest Company that Alba founded and built into a $1 billion business. Colorful modern art and furniture create a transitional environment that honors the bones of the Spanish Revival home. By introducing exciting accents and colors, while stripping the interior of excessive wrought iron ornamentation and squaring off some arched windows, the home is now more contemporary, a nod to the modified Mediterranean style of legendary 20th century L.A. architect Wallace Neff. A mid-century modern lighting fixture in a mahogany-clad study introduces modernity into an otherwise traditional space. Similarly, a stunning mid-century modern chandelier — a vintage 1960s fixture with 300 pieces of uncut crystal — illuminates Alba’s dining room, hanging from a ceiling adorned in shimmering silver foil wallpaper. 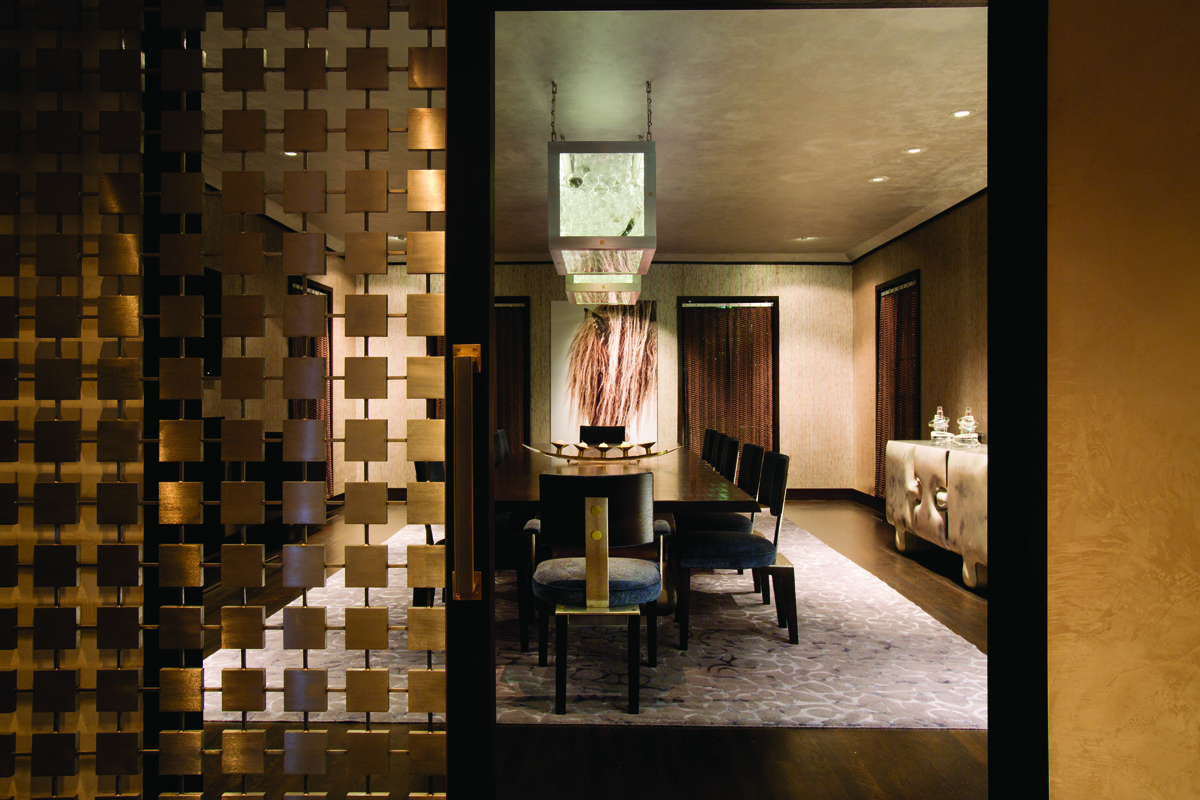 Whitman transformed a 4,000-square-foot prewar Manhattan apartment of actors/then spouses Melanie Griffith and Antonio Banderas with funky mid-century sputnik lighting fixtures, bold street art and a rich, seductive color palette without erasing the unit’s classical features. This design can understandably be perceived as a bit over-the-top, yet it retains the building’s stately elegance and succeeds in blending disparate periods into a harmonious environment. 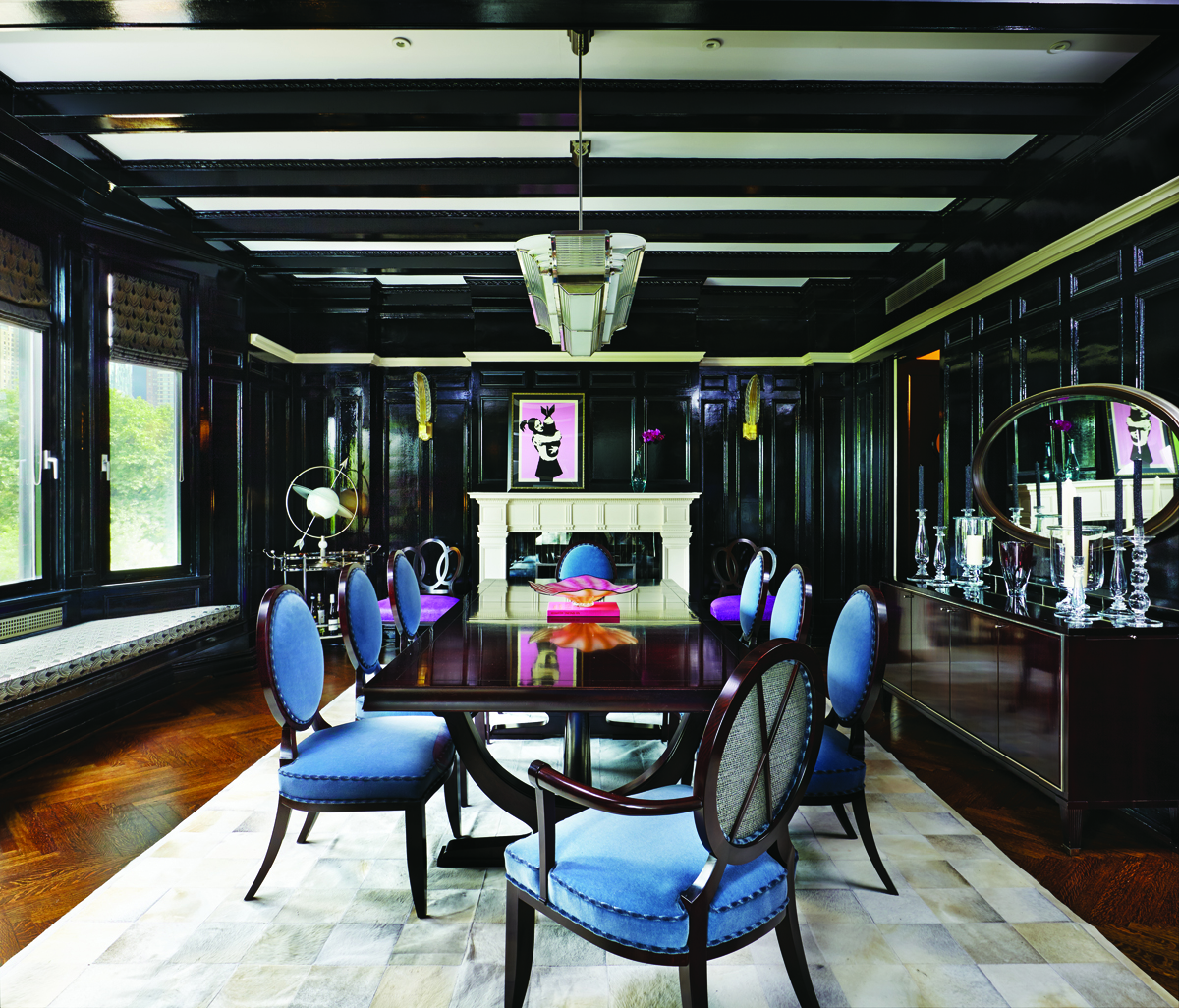 “Melanie adores Marilyn Monroe and Greta Garbo, so I wanted to bring in a bit of Old Hollywood, but with a punch of creativity,” reports Whitman. The traditional dining room was reimagined through the application of a high-gloss black lacquer finish, and was designed around a famous Banksy over the marble fireplace, a provocative image of a young girl hugging a bomb.

The designer, who just completed 414 Light Street, an exclusive 44-story residential tower in Baltimore, is constantly exploring new materials and uses for them. Suggesting ceilings are overlooked canvases, she enhances spaces through the use of overhead wallpaper, as she did in Ms. Alba’s home. She is currently experimenting with glitzy metallic-beaded curtains from ShimmerScreen, flexible space dividers that can add a sense of drama or romance. Whitman is also a fan of London-based Carpenters Workshop Gallery, which offers functional sculptures (i.e. furniture) created by both emerging and internationally acclaimed artists. 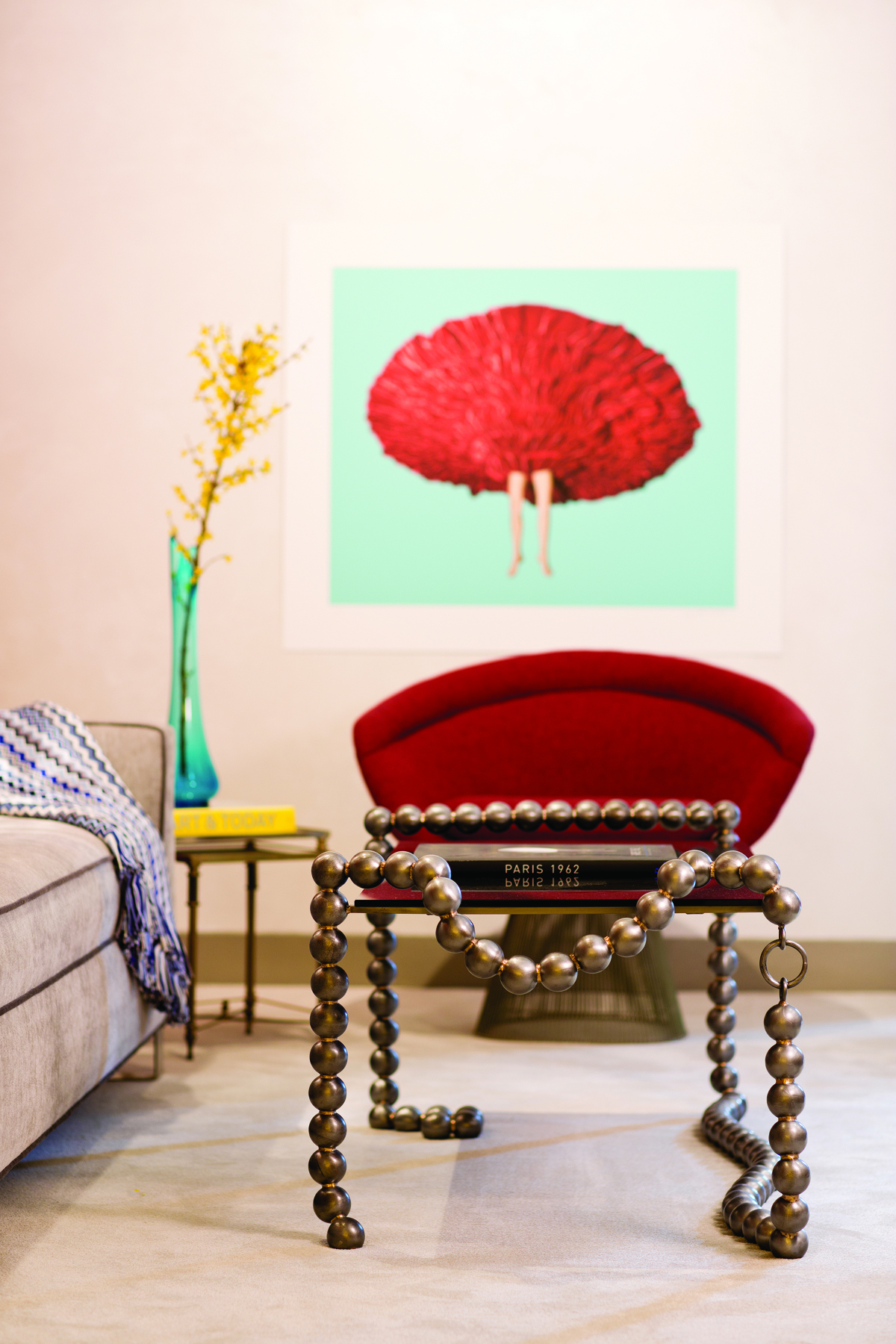 Whitman is a passionate dog lover and when Ace, her pit bull-American bulldog mix died, she began a foundation called Ace of Hearts, which has rescued 6,000 pooches from death row. The designer has become a leading authority on creating dog-friendly environments and has authored a line of eco-friendly pet beds called Greener Pup. “I honestly don’t think I’d ever work for a client who insisted on keeping his dog outside,” says Whitman, who believes smart material choices and space planning can make any house accommodating to animals without compromising style.

Whitman has developed her own eco-conscious line of paint called Wall Makeup and her collection of furnishings includes a stunning replica of a Leon Rosen mid-century modern desk that pairs stainless steel legs with a striking Madagascar ebony surface. Playful and unique is her ball bearing “necklace” coffee table, featuring a glass tabletop whose legs are composed of strands of meandering stainless steel or brass spheres.

Kari Whitman is proof that innovative design is alive and well, even if some of it has rightly gone to the dogs.