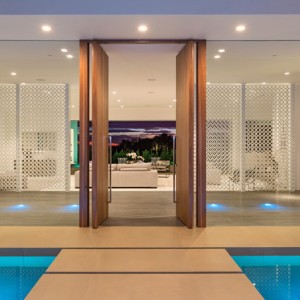 It was during the rocking 1950s when Trousdale Estates, a 410-acre parcel in the Beverly Hills foothills, offered a “life above it all,” reaching out to moneyed Angelenos with a promise of pretty and prestige. With the signature appeal of location, location, location, plus views, views, views, Trousdale Estates quickly found favor with a long list of notable names. Dinah Shore and Richard Nixon were two of the initial buyers, according to writer Peter Haldeman of The New York Times Style magazine. Rat Packers Frank Sinatra and Dean Martin followed suit, as did Elton John and Jane Fonda, according to Steven Price, author of “Over the Top: The Architectural History of Trousdale Estates, Beverly Hills.”

Now known simply as Trousdale, the area has played host to a list of residents since then—and it reads like a who’s who of Hollywood’s elite. Modern-day celebs like Ellen DeGeneres, Ryan Seacrest and Jennifer Aniston have all reportedly fallen victim to the area’s unique charms and unmatched convenience. It’s easy to see why Trousdale’s proximity to Beverly Hills, privacy and sweeping views that span nearly the entire L.A. basin would be tempting to the celebrity set.

“The uniqueness of Trousdale is this: you are only a short distance from town, yet you feel so far away,” says Jade Mills, a sales associate with Coldwell Banker Residential Brokerage in Beverly Hills and a Trousdale resident. “When I go home at night, I can see the entire city. I feel totally at peace. People ask me all of the time, ‘If you’re that close to Sunset, can you hear the noise?’ There is no noise. We hear birds in the morning and owls at night. It’s completely peaceful and beautiful.”

By many accounts, Trousdale’s history is as compelling as those who have called it home. The development is “Paul Whitney Trousdale’s crowning achievement, the only one to bear his name,” writes Price. “There’s an amazing amount of L.A. history here—from how he swung the deal [to purchase the land from oil tycoon Edward L. Doheny and family] and persuaded the City of Beverly Hills to stretch its borders to include his Trousdale Estates. And how he built what came to be known as ‘Versailles on a Hill.’”

Price is speaking, of course, of Greystone Mansion, the 46,000-square-foot Gothic and neoclassical wonder built as a private residence for the Doheny family. Today, 18.3 acres of the original land is an historic landmark recognized in the Registry of Historic Places; the remaining acreage was sold to Trousdale, who personally oversaw the project that transformed the hills into 539 view lots.

For those who appreciate architectural distinction, and especially a modern aesthetic, Trousdale is a promised land. Wallace Neff, Paul Williams, Hal Levitt, Quincy Jones and Lloyd Wright—all are part of the architectural fabric of Trousdale and all contributed to the neighborhood’s pedigree.

At once understated and magnificent, the mid-century modern architectural style endures in Trousdale, having overcome a period of mansionization with “fantastic recent remodels and new designs, plus some remarkably well-preserved originals,” notes Price. But it reportedly took a bit of serendipity to put Trousdale back in the public eye. Serendipity by the name of Versace.

An ad campaign in 2000 conceiving a Versace-like experience shot by fashion legend Steven Meisel in the Skouras house owned by DeGeneres helped spur a Trousdale revival.  According to Haldeman, local interest peaked at the same time “style-savvy young Hollywood began to circle,” hearkening back to a pattern that began a half-century earlier.  (As a postscript, not only was Meisel’s Versace shoot said to have put Trousdale back on the map, it also turned Meisel into a believer.  The year after the shoot, he bought in Trousdale.)

Today Trousdale is again one of Southern California’s most in-demand neighborhoods, filled with unique properties and trophy homes, and those who wouldn’t consider living anywhere else.

A life above it all. And to think that once it was only an advertising slogan.