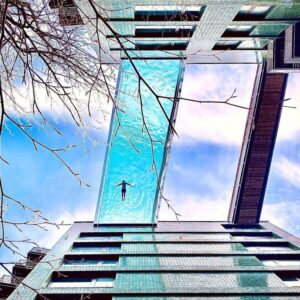 Welcome to the era of the pool. If you don’t have one, chances are, you want one. Plunge pools. Infinity pools. Rooftop pools. But is a floating pool on your wishlist?

If the thought induces your acrophobia or simply gets your adrenaline pumping, you’re not alone. A new luxury tower in London is challenging traditional notions of pool design by unveiling a pool suspended 115 feet in the air. The Sky Pool, as it is aptly called, is basically a water-filled bridge positioned between two 10-story residential towers at the Embassy Gardens.

Developed by a joint venture between EcoWorld and Ballymore, Embassy Gardens lies in the heart of Nine Elms, the central London riverside neighborhood lying at the heart of a massive revitalization plan envisioned by Sir Terry Farrell.  The former Mayor of London called it “possibly the most important regeneration story in London and in the U.K. over the next twenty years.” Contemporary high-rise homes mingle among landscaped public squares, parks and spectacular gardens in an architecturally distinct design as amenities such as a private club with its own library and gym, the Sky Pool, spa, cinema and business facilities will keep residents thoroughly entertained. (The pool is only open to club members and their private guests.) 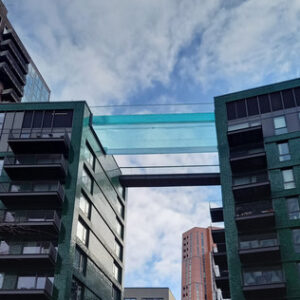 Back to the pool. While London may be known for its rainy weather, it can get exceptionally hot during the summer, making that Sky Pool a matter of necessity. We all know that “necessity is the mother of invention,” and that’s exactly how the Sky Pool came to exist. By the time the creatives decided to add a swimming pool to the project, they realized the only place big enough to house it was on the roof—and even that wasn’t quite the right size. So they decided to construct the world’s first floating pool stretching across two flat roofs of the five-star hotel-like Embassy Gardens’ prominent Legacy buildings.

The 82-foot-long heated oasis is thought to be the world’s largest single piece of load-bearing acrylic. Built in Colorado, transported to Texas, and then shipped across the Atlantic on a three-week-long journey, the structure is completely transparent, making it appear like a rectangular glass box floating in mid-air. And part of it—46 feet, to be specific—kind of is floating in mid-air. While both ends of the basin resemble a traditional outdoor in-ground swimming pool surrounded by a sun deck, the central section is suspended in the sky courtesy of an invisible steel frame. The floating section first solved the problem of not sacrificing the pool’s size and it also created a visual connection to the world below. The swimmers can see the street and city strollers can be awed by the Sky Spool.  Steps and filtration systems were also installed on either end of the pool, leaving the middle 45 feet a minimalist’s aquatic fantasy.

If you’re wondering about the suspended pool’s structural integrity, the developers brought on structural engineers Eckersley O’Callaghan and HAL Architects, who performed countless behavioral analyses to make sure the structure wouldn’t come crashing down. The team landed on an eight-inch-thick acrylic frame with a nearly 12-inch-thick base that’s just shy of 10 feet deep and weighs 50 tons. Taking industrial cues from New York City’s Meatpacking District, the team truly pushed the boundaries of construction and engineering to bring the future of pool design to the here-and-now — right as we are all emerging from pandemic lockdowns in search of the tranquility of the outdoors and vacation-like pool dreams.

After all, it’s not every day that a swimmer gets to take in views of the Houses of Parliament, the London Eye, and, of course, the River Thames while taking a dip.