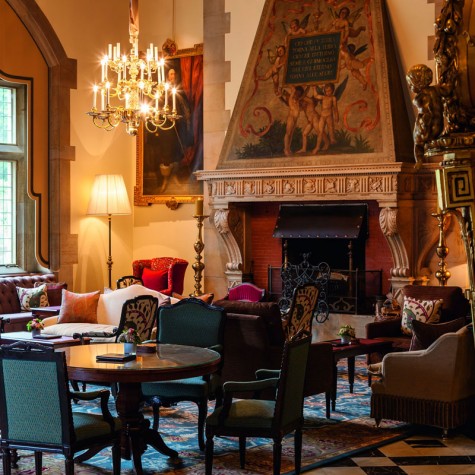 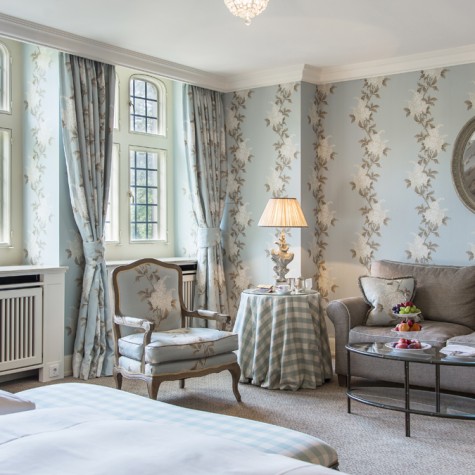 It was 1945 when the Schloss Friedrichshof castle near Frankfurt, Germany, was looted, stripped of the jewels belonging to the family of Queen Victoria’s oldest daughter, Empress Frederick of Germany. It is said that only 10% of the jewels were ever recovered.

How fitting, then, that the recent renovation of the 1890s castle, now know as the five-star Schlosshotel Kronberg, introduced a rhapsody of vibrant furnishings that returned a wealth of jewel tones to the 62-acre property. It was the eye of London designer Nina Campbell that helped the castle hotel project an all-new air of luxury with a mélange of old and new and a re-imagined palette showcasing a burst of joyful hues — plus some 21st-century technical swagger. 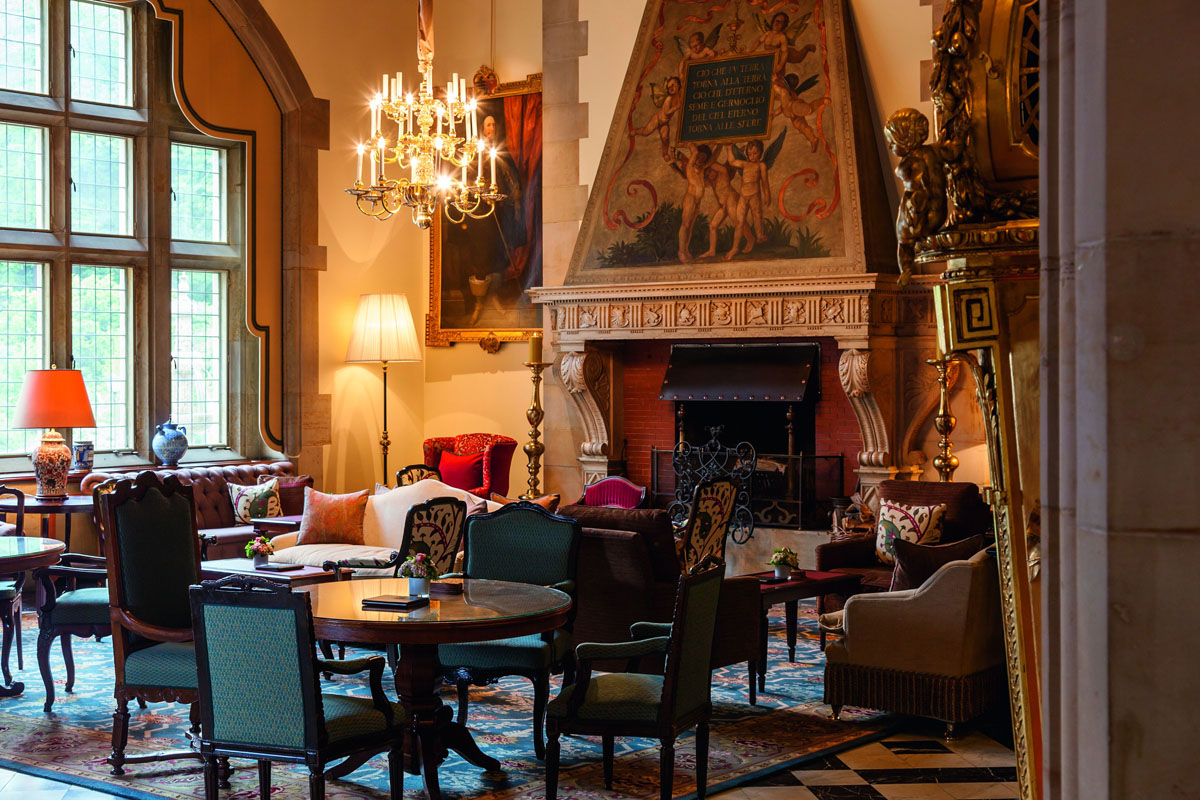 “Nina Campbell is a very experienced interior designer. She has been working with the owner family for a long time in various properties, and her oeuvre is highly trusted and appreciated by them,” says Franz Zimmermann, general manager of Schlosshotel Kronberg. The renovation of the property “was not only about refurbishment and decoration of rooms and suites, but about investing in the future. About technical enhancements like high-speed Internet connection, the modernization of telephone lines and installation of air conditioning in all areas of the hotel. It was about implementing modern facilities in a historical castle that was never designed to be a hotel.”

Originally built for Empress Victoria starting in 1889, the castle was turned into a five-star grand hotel in 1954. But the Empress’ legacy remains, reflected in everything from the design of the grounds to original furnishings and displayed art collections, to the way the renovations were used to frame its royal history.

“The property is unique, as it was the former home of an empress, and no other castle in Europe can say this,” says Zimmermann. “The design of the castle and the parklands, created and shaped by her, reflect her deep interest in arts and philosophy, as well as her love of her native country, Great Britain. Indoors, it almost emits the same atmosphere as it did in the Empress’ time.”

Tasked with updating and reimagining this historically significant residence-cum-hotel without losing its royal allure, London designer Nina Campbell embraced the challenge in its purest form. “I never felt like I was decorating a hotel, but rather bringing back the private house of a great royal family,” she remarked to Architectural Digest. 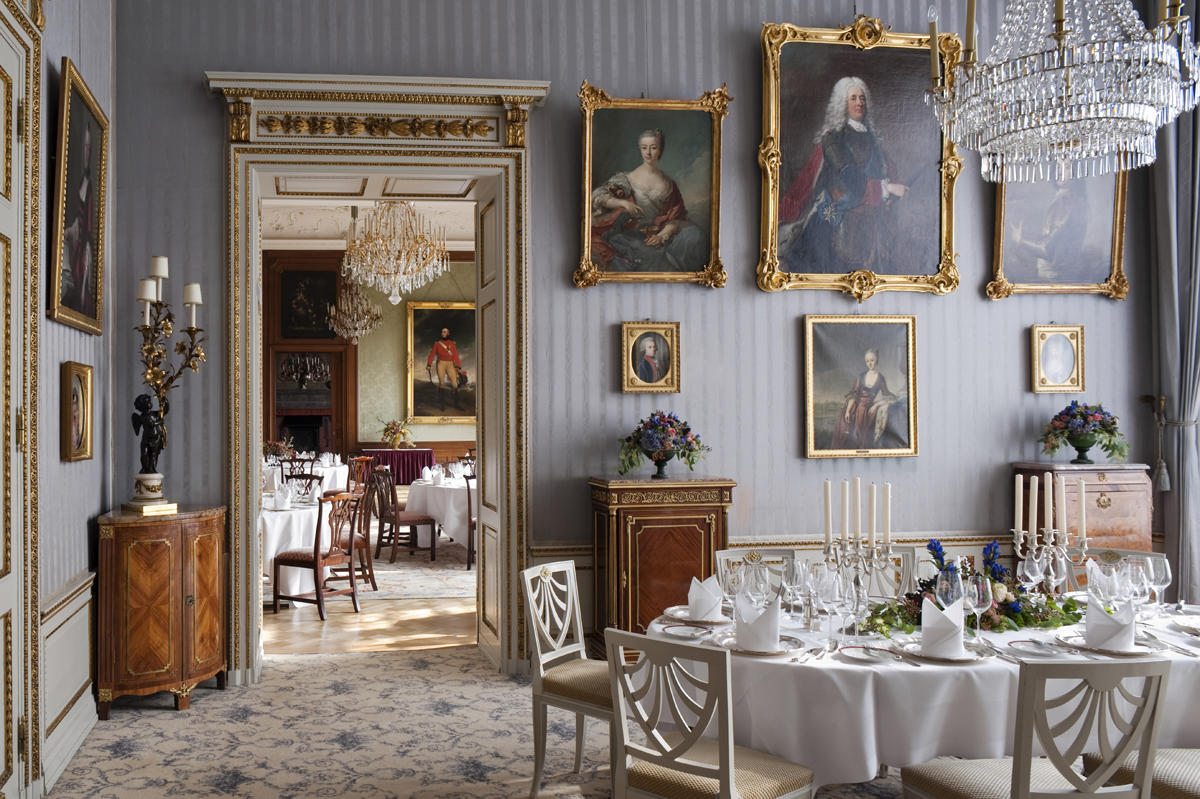 Indeed, the empress who once called the castle home would surely appreciate the stately furnishings and rich palette — the deep crimson upholstery of the dining chairs in the Tea Room, guest rooms bedecked in lavender and sky blue and aqua. “Yes, she would,” says Zimmermann. “Nina Campbell´s design evolves the elaborate ambiance and style created by Empress Frederick more than a century ago. Campbell merges old and new by choosing the right colors, beautiful handpicked furniture, and lovely fabrics and tapestry. It is a modern version of her lifestyle.” 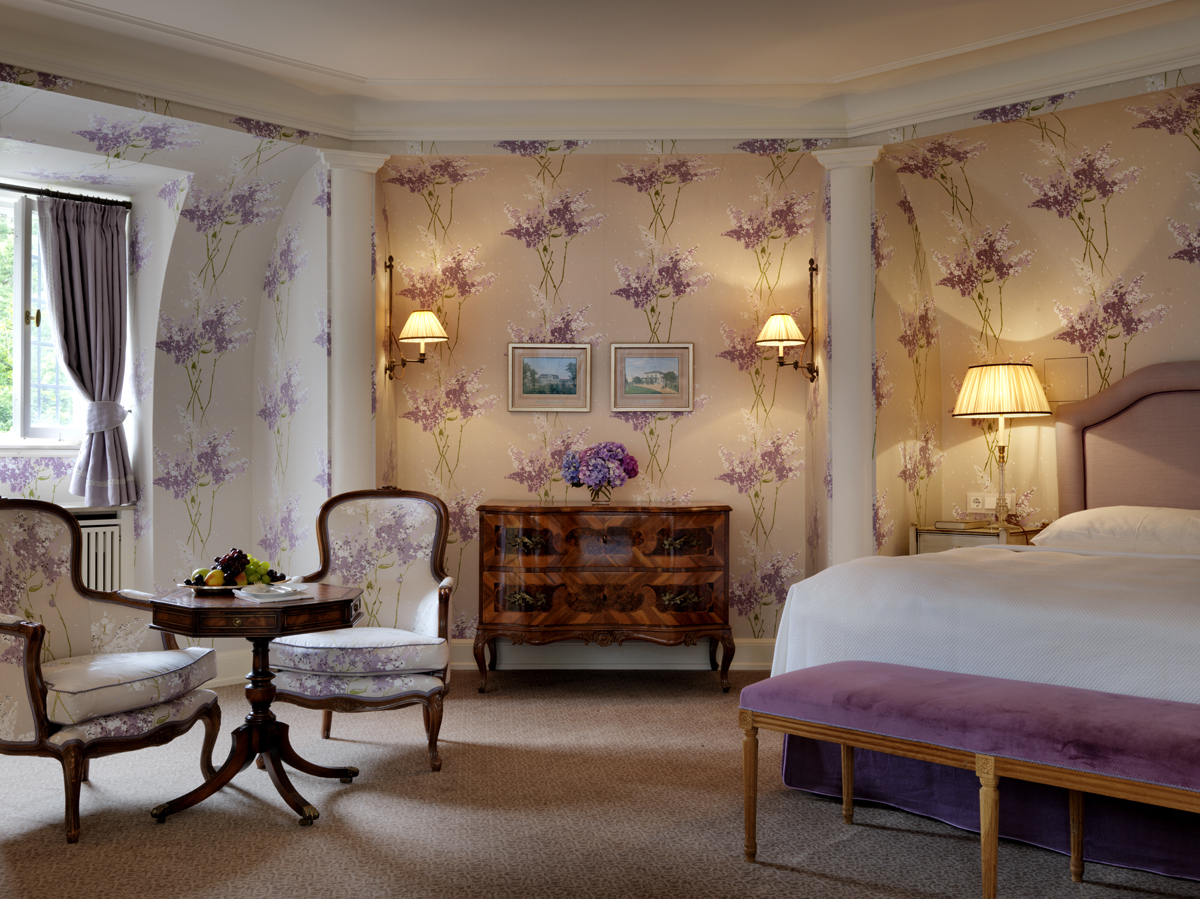 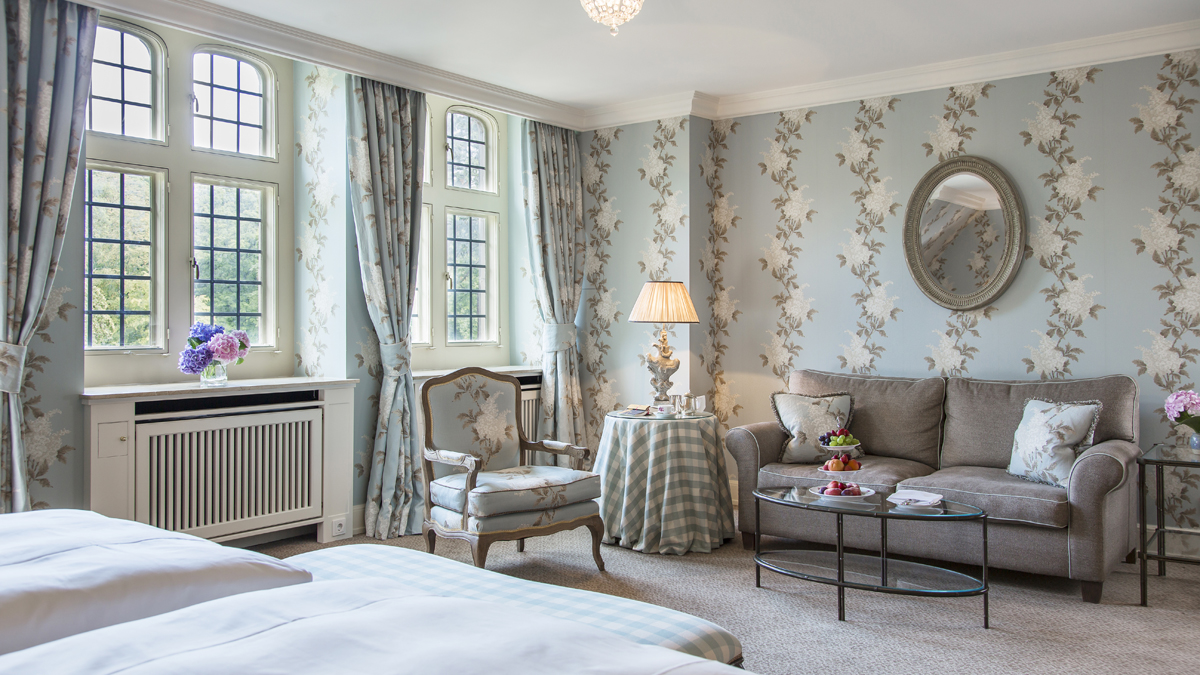 While the image of European castles is largely shaped for Americans by “Downton Abbey,” Schlosshotel lies in stark contrast to the gothic, crested, tapestried, frescoed, damasked and gilded fare of Highclere. Campbell’s designs have given more traditional castle décor the kiss-off with her renovation while continuing to safeguard and showcase the regal style of the Empress herself.

“The hall, the restaurant and the classical parlors are still decorated with her artifacts and belongings,” says Zimmermann. “So are the historical suites named after the family members that used to come by and visit, and the modern rooms and suites that also show antiques, paintings, and pieces of art that used to belong to the Empress.”

Royal traditions have also been preserved in the castle hotel. Guests enjoying a picnic in the parkland’s grotto will do so in the same revered space where Empress Frederick once took her afternoon tea. Guests may stay in the same luxury spaces — the Royal Suite and Tsar Nicholas Suite — that have hosted diplomats and nobility like Russian President Mikhail Gorbachev, German Chancellor Gerhard Schroeder, and a cavalcade of European royalty throughout its history. 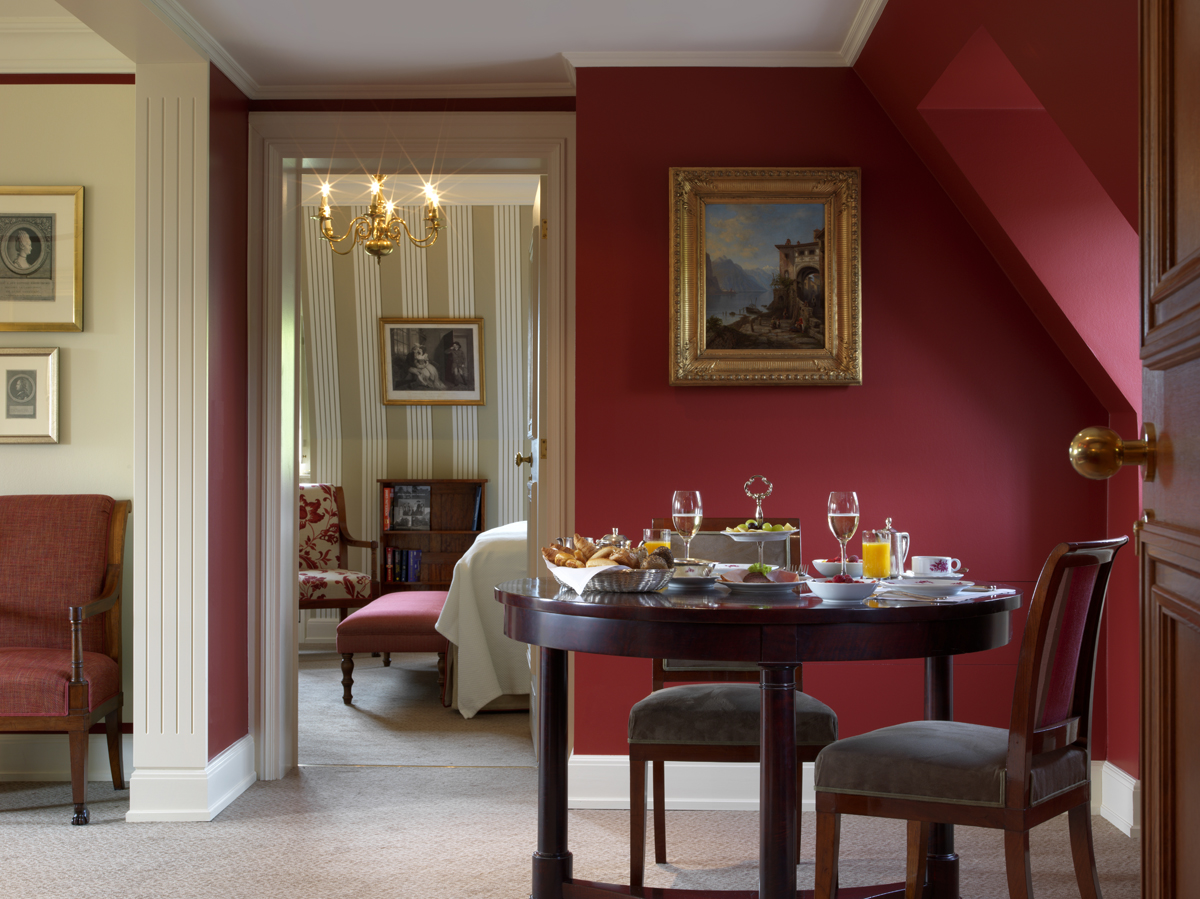 If you thought the magic of television was the only way to enjoy the majesty of a luxury castle, this historic gem begs to differ.

The Jewel of Frankfurt: Schlosshotel Kronberg

The Jewel of Frankfurt: Schlosshotel Kronberg 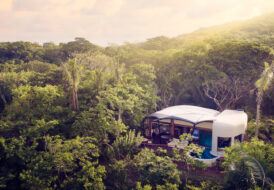