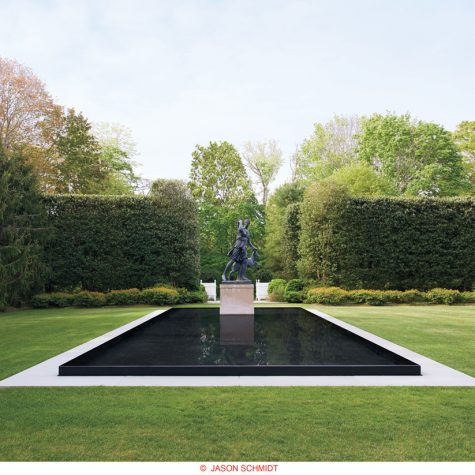 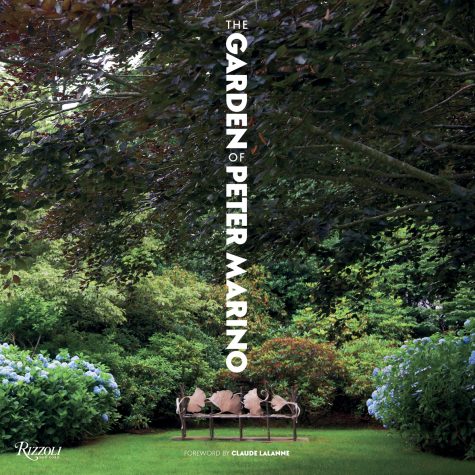 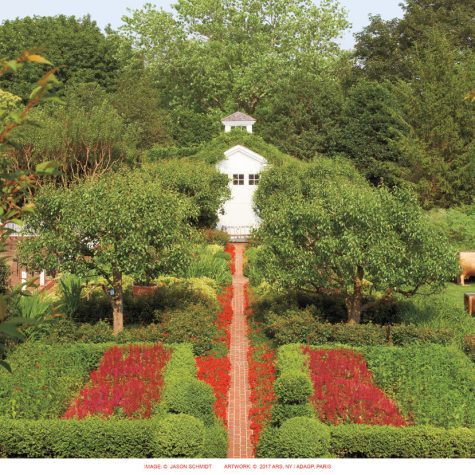 Distinguished rebel. Sartorial biker. Distinguished provocateur. Peter Marino has mastered the art of juxtaposition, capable of holding opposites in artful reverence. The acclaimed architect is known for dreaming up high-impact retail spaces for Louis Vuitton and Chanel, and at the same time, creating dazzling residences that blend styles and eras that start new conversations. 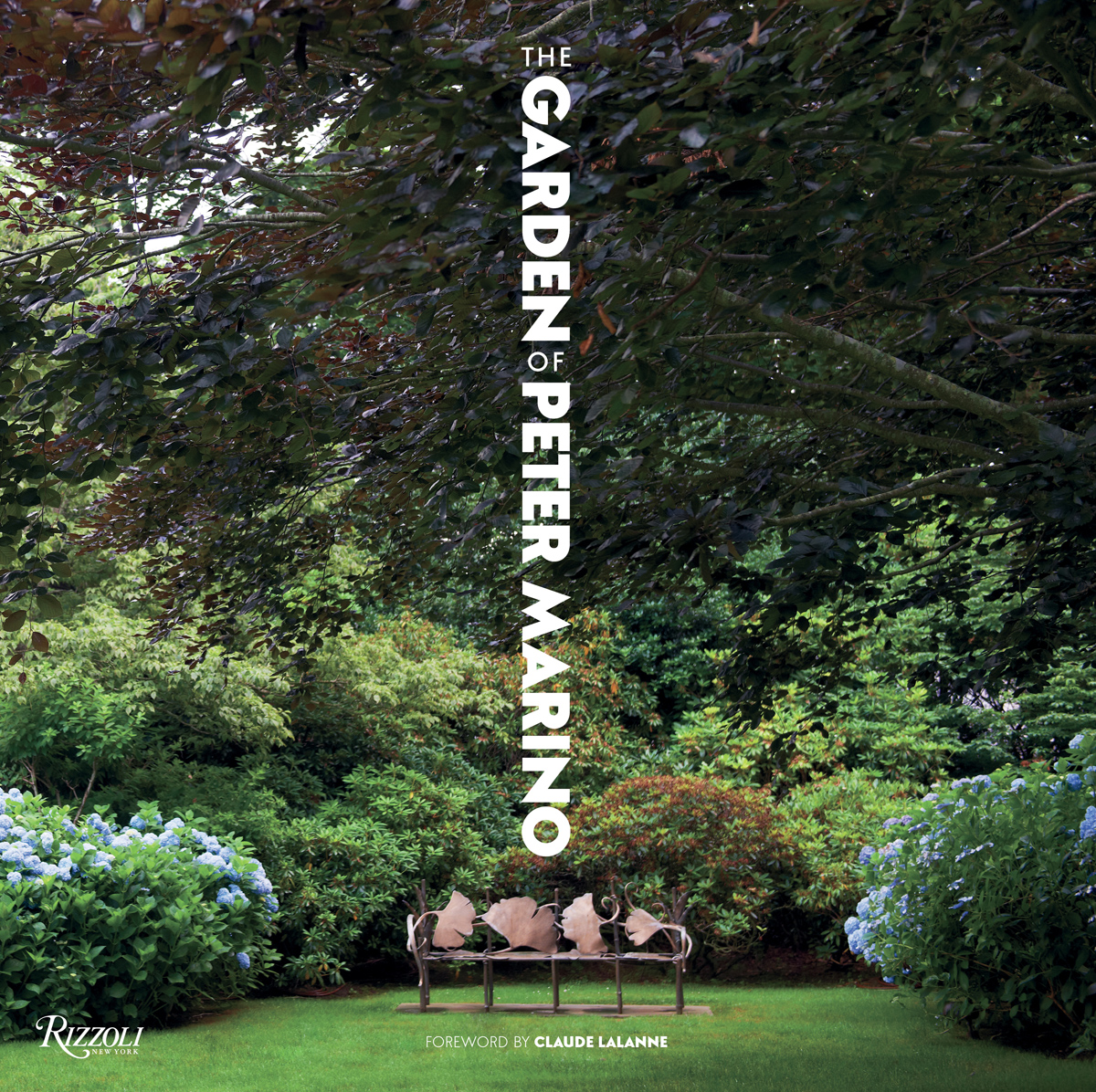 The same can be said for the horticultural fantasyland he has painstakingly cultivated at his (dare we say) romantic 12-acre Hamptons home on New York’s Long Island. His magical garden positions the formal against the informal in delightful fashion. A rose garden and carefully curated plants, trees and evergreens express zipped-up formality, while informal touches such as flower beds planted in untamed blocks of purples, pinks, reds, and yellows and nearly forty sculptures by Claude and François-Xavier Lalanne whimsically interspersed throughout hit a playful tone. 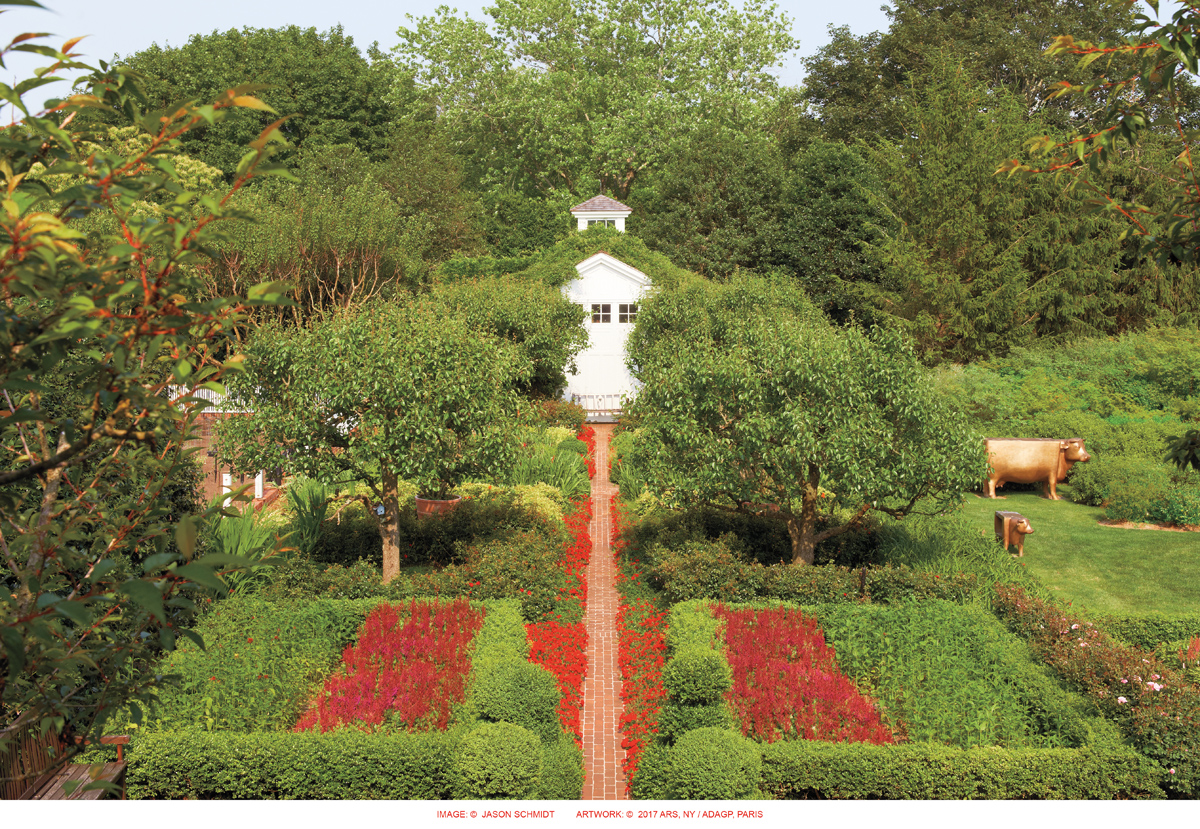 Seasonal floral highlights include the colorful blooms of azaleas in the late spring, roses in June, and hydrangeas in the summer. All of this lush landscaping wonderment may seem like a far cry his motorcycles and leather jackets. But for as much as his delightfully asymmetrical garden “melds Dutch Colonial, Arts and Crafts, and McKim, Mead & White inspirations,” noted Architectural Digest Mitchell Owens in 2014, it is unabashedly American. 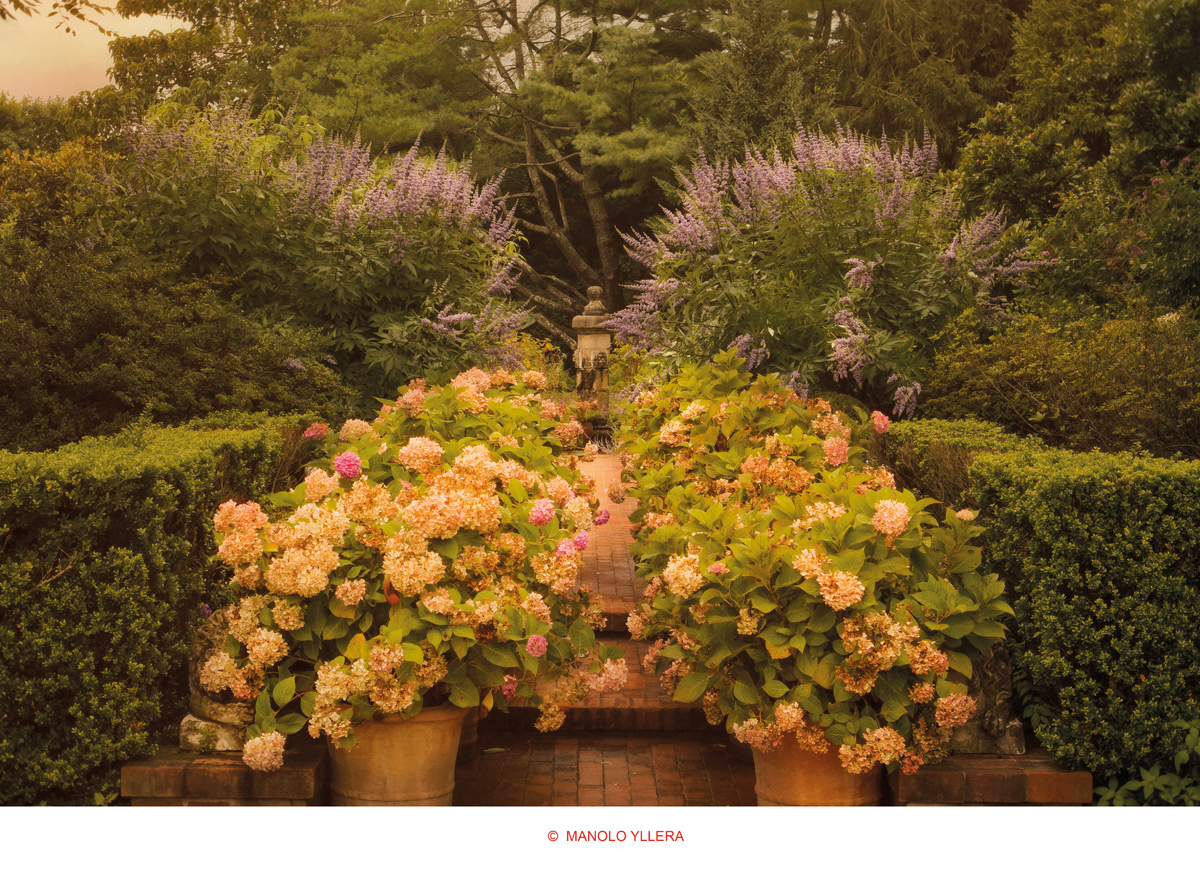 “American landscaping, like American architecture, is its own thing,” Marino told Owens. “A combination of formal and informal.” 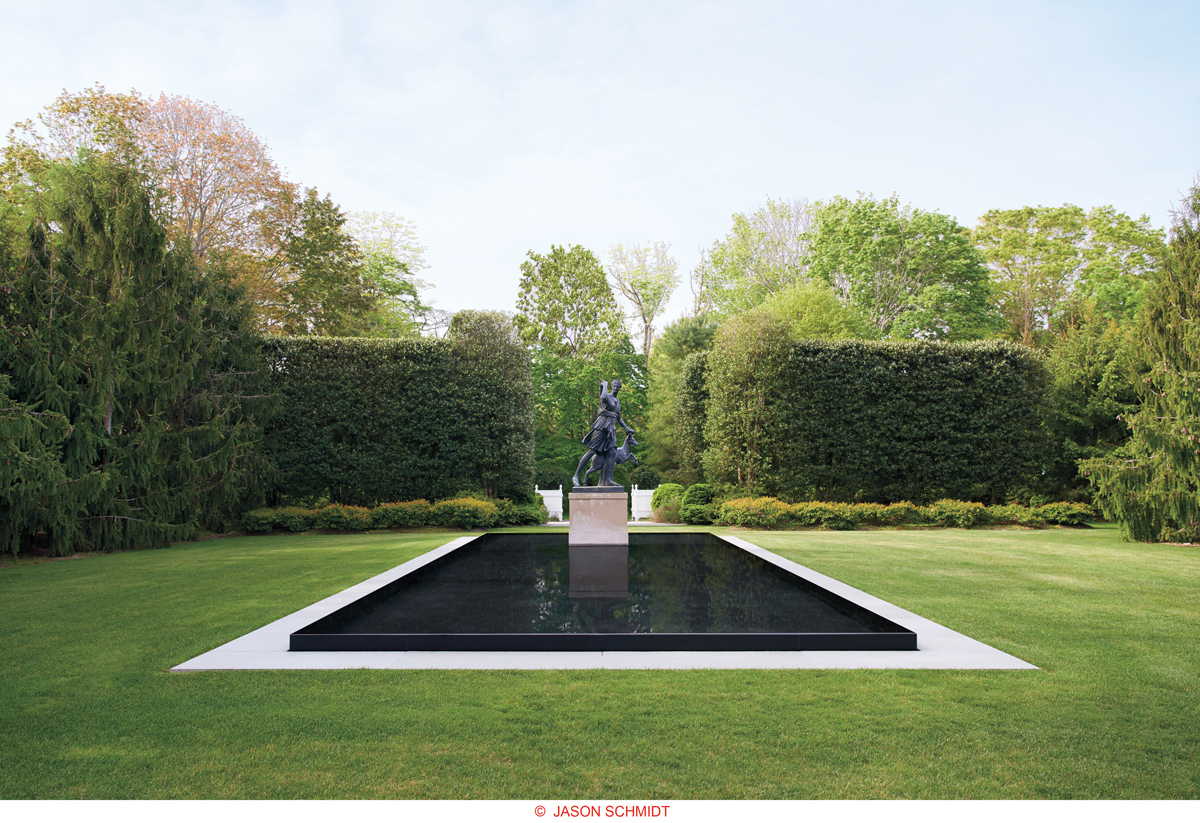 This melting pot of styles and concepts provided the inspiration for his new book, “The Garden of Peter Marino” (Rizzoli, $85), which offers an unprecedented look at the acclaimed architect’s private paradise. As he describes in the 262-page tome: “A friend came to visit me in early June when the garden is at its most beautiful and announced, ‘This could only be the garden of an architect—and an American one at that.’ When I asked what she meant, she explained that it was because I’d created a series of different outdoor ‘rooms,’ all squares or rectangles, with everything organized on a single axis that goes from the cow sculpture, on one side of the house, all the way to the bull sculpture, on the other side. And she was right! These are the sorts of things architects obsess over.” 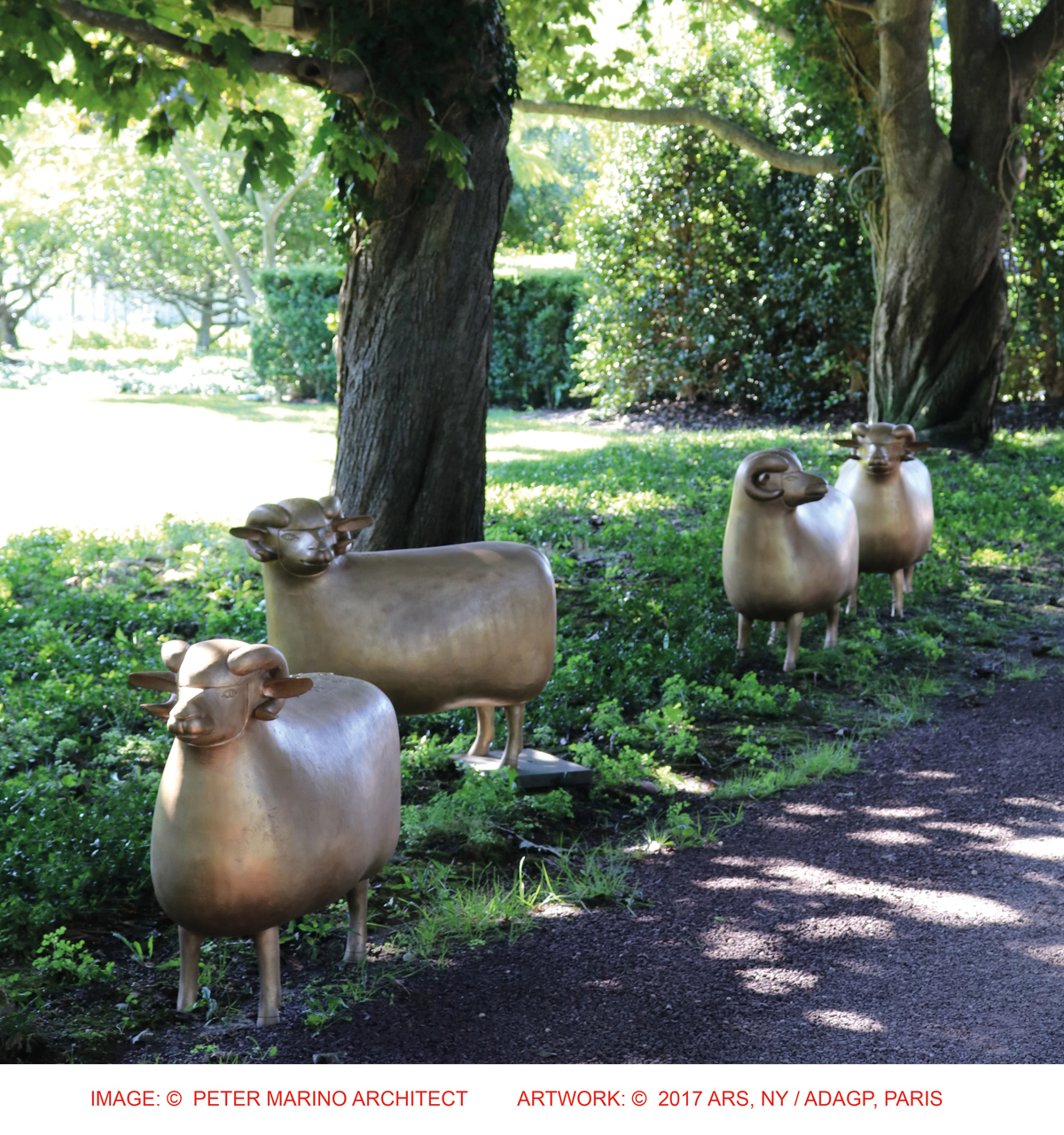 “Fantasy has been a powerful element in my design for the garden,” explains Marino. “I have this ‘Alice in Wonderland’ idea in my head that a garden should be a place of wonderment. The French use gardens to show grandeur and the English to show how things have endured for hundreds of years, but for me they’re all about fantasy.”

A Place of Wonderment: The Garden of Peter Marino

A Place of Wonderment: The Garden of Peter Marino