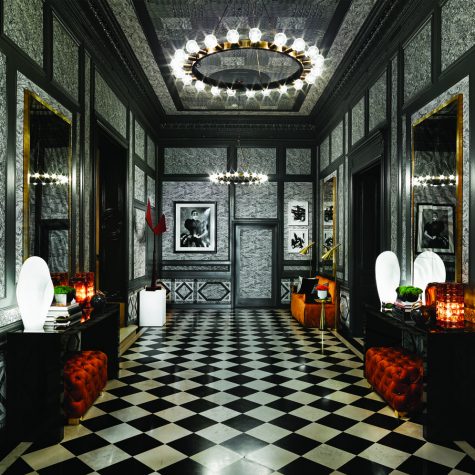 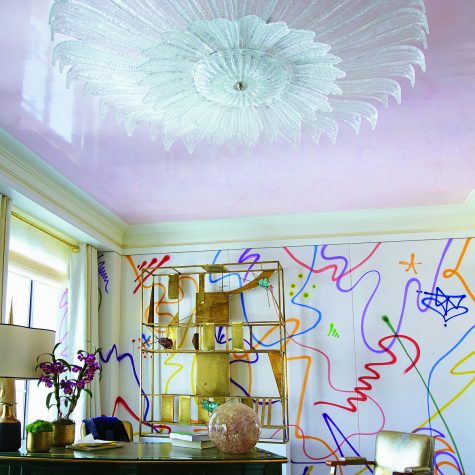 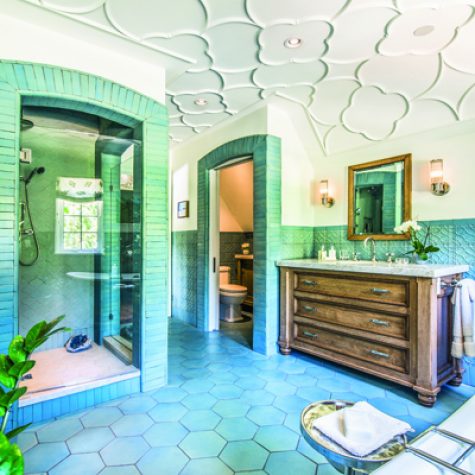 The ceiling may be one of a home’s most overlooked design features. Yet it can instantly move a room into high design territory. Interior designers have been adopting a top-down approach as of late, as they seek to elevate their clients’ interiors with increasingly daring ceiling applications.

“Clients are feeling more comfortable about going bold these days, and it isn’t stopping with just furnishings,” says Los Angeles-based designer Melissa Warner Rothblum of Massucco Warner Miller. “Anything from graphic wallpaper to painted stripes can get a lot of attention on a ceiling and add so much to the overall aesthetic of the room.” 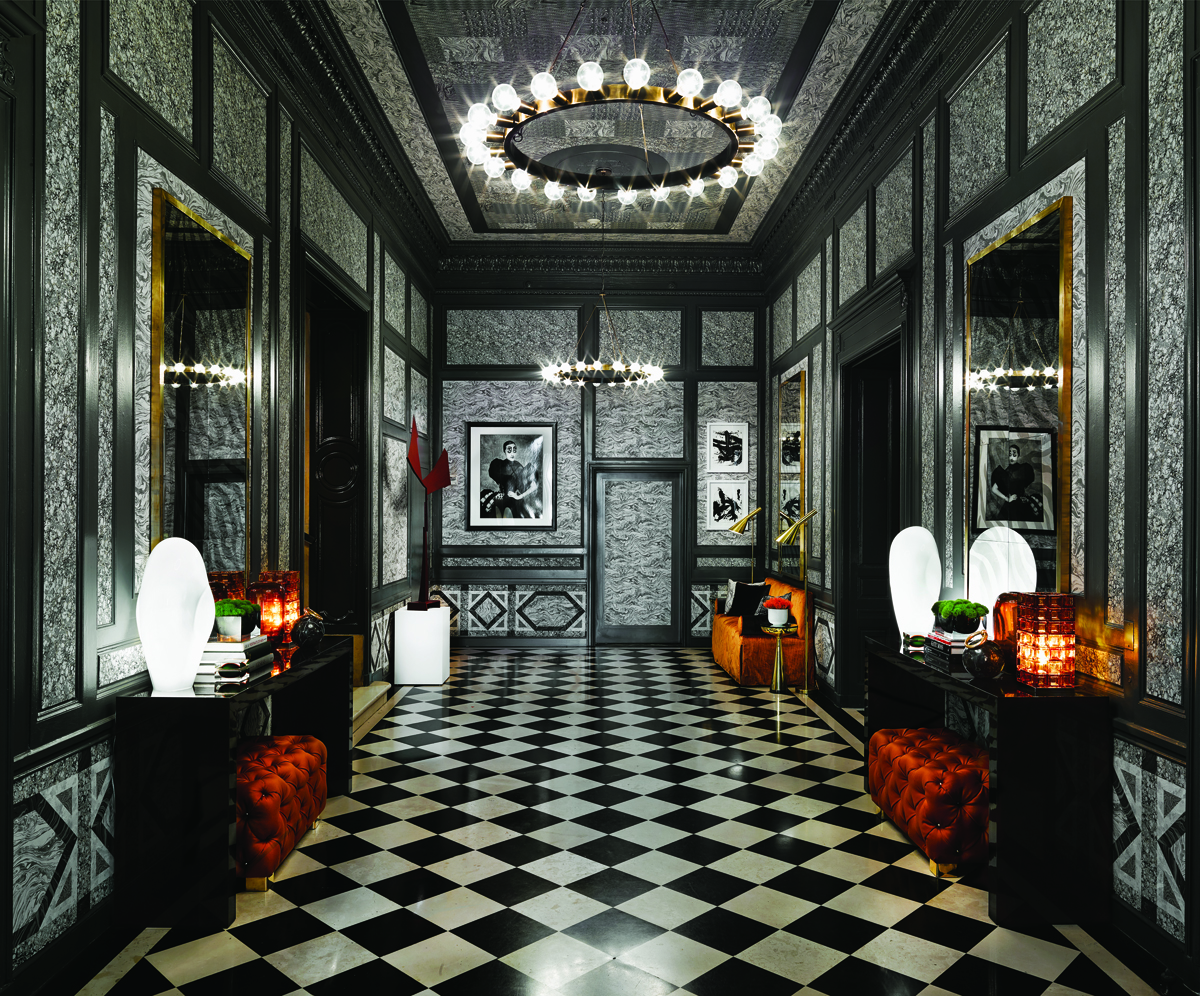 Experts have declared the statement ceiling among the top design trends to watch in 2018. Searches for “statement ceilings” on Pinterest are also up 300%, according to the image-collecting site. Whether it’s using bold paints, textured wallpapers or cool artisanal elements, designers are creating a new kind of feature wall from above.

“As the ceiling has been so ignored over the last 70 years, it’s definitely about to have its renaissance again,” says celebrity designer Martyn Lawrence Bullard. “With the use of wallpaper, so strong and imaginative, the ceiling is coming into its own and is the decorative scene stealer in 2018. It’s about taking it to the next level in a space and creating the ‘wow’ moment, the jewel in the crown — whether a color pop or a molding, scenic or reflective, it’s all about a pinch of drama that people are looking for.”

New York-based Phillip Thomas has noticed that the focus is moving away from floors to the ceiling. “While floors can have a tremendous impact on the way an individual engages with a space, a statement ceiling can have a greater impact on a space and an even greater return should a homeowner choose to sell his or her home,” he explains. “As I say to all my clients when we begin a project, ‘the higher the ceiling, the more valuable the space.’” 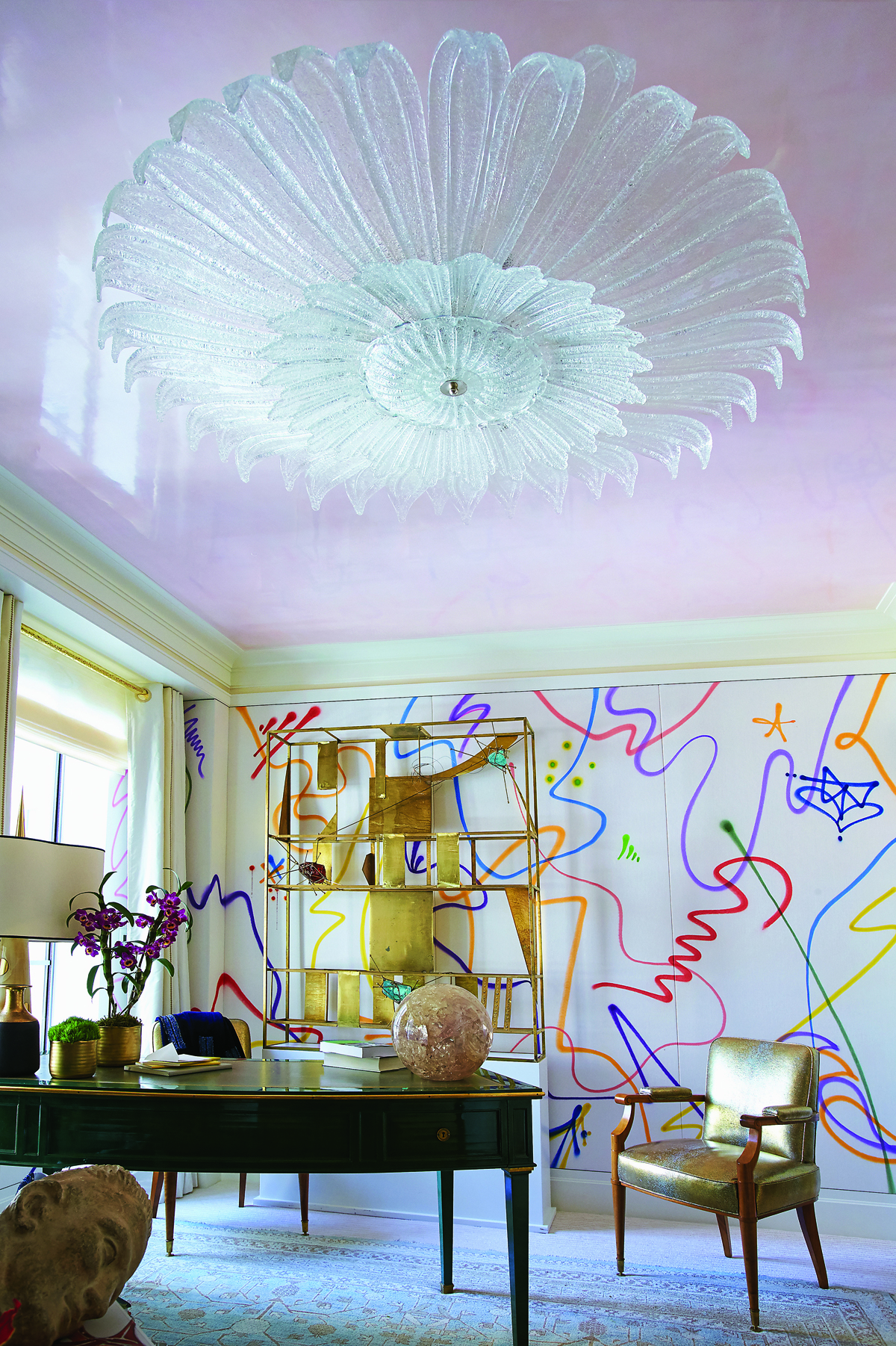 Of course, there is historical precedent for decorating the ceiling. Often the ceiling was the architect’s preferred place to hide floor or roof construction. It was also the ultimate status symbol. The modern statement ceiling is different, because it’s a way for minimalist-minded luxury homeowners to express themselves without adding clutter or taking up too much space. Advancements in LED lighting have also allowed the modern-day ceiling to go from serving a mere function to also serving an aesthetic purpose. “Innovations in lighting technology have allowed the ceiling to become a blank canvas for all sorts of decorative treatments that ultimately create statement ceilings,” says Thomas. 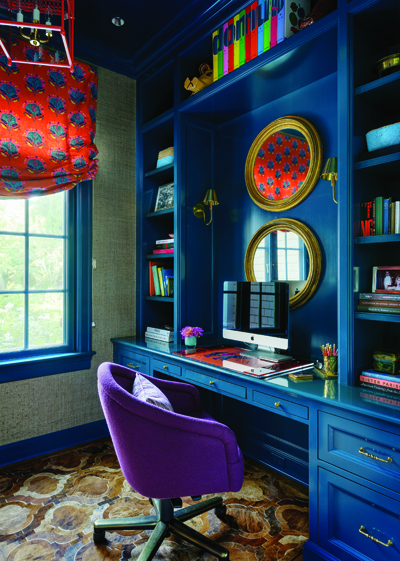 A coat of paint is often the quickest, easiest way to punch up your ceiling power. “Ceilings are a wonderful way to create the illusion of more light in the space,” says Thomas. “To this end, I try to use reflective paint finishes, such as semi-gloss, gloss or metallic. These finishes capture natural and artificial light, creating sparkle and drawing your eye’s attention, which also helps to bring your eye up, making space feel taller.”

Bullard loves to use soft shades of pink to blush complexions or bold shades of orange to mimic a tropical sunset. Some designers are not even afraid of going dark. “If the walls are darker, the ceiling can follow to be a dramatic backdrop to an interesting light fixture,” say Melissa Benham, Jennie Bishop and Kristen Ekeland of Chicago-based Studio Gild. “Black-painted beams, painted tongue-and-groove or stained ceilings are always classic.” 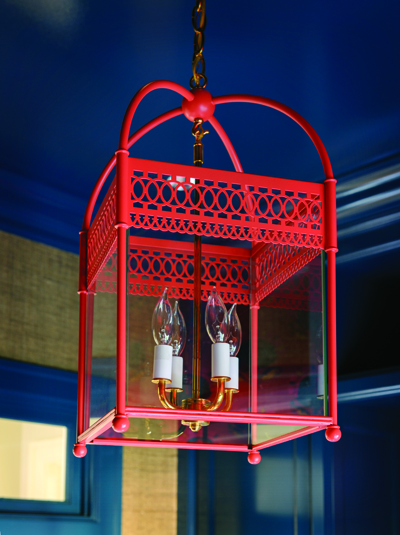 By far, most designers favor wallpaper as a ceiling treatment. “There are so many different types of wallpaper on the market these days,” says Thomas. “I love using grasscloths to provide warmth and stripes to create energy. I love metallic to create drama, sparkle and depth.” For Rothblum’s clients, wallpaper “always adds a huge punch…. It’s unexpected and instantly injects extra personality into a space.” Studio Gild likes to use wallpaper that “has a small amount of shimmer to play on the light in the room or large-scale graphic patterns as a backdrop to a beautiful light fixture.” Bullard’s favorite? Scenic prints. “I think they add such romance to a space and obviously create a transformative, magical experience. Pattern can also be really cool — a faux-marble paper, applied between moldings on a ceiling, will add grandeur and an Old-World ambiance while retaining its fresh appeal.”

Wallpapering the ceiling can also complement the color of the walls, according to Kara Smith, president of Los Angeles-based SFA Design. “Stick to a monochromatic palette, but go for a shade darker,” she says.

Wallpapers are also going artisan: “A lot of artists are making their own hand-painted wall coverings, so lately we’ve been doing a lot of unique custom-made wallpapers,” Smith adds. 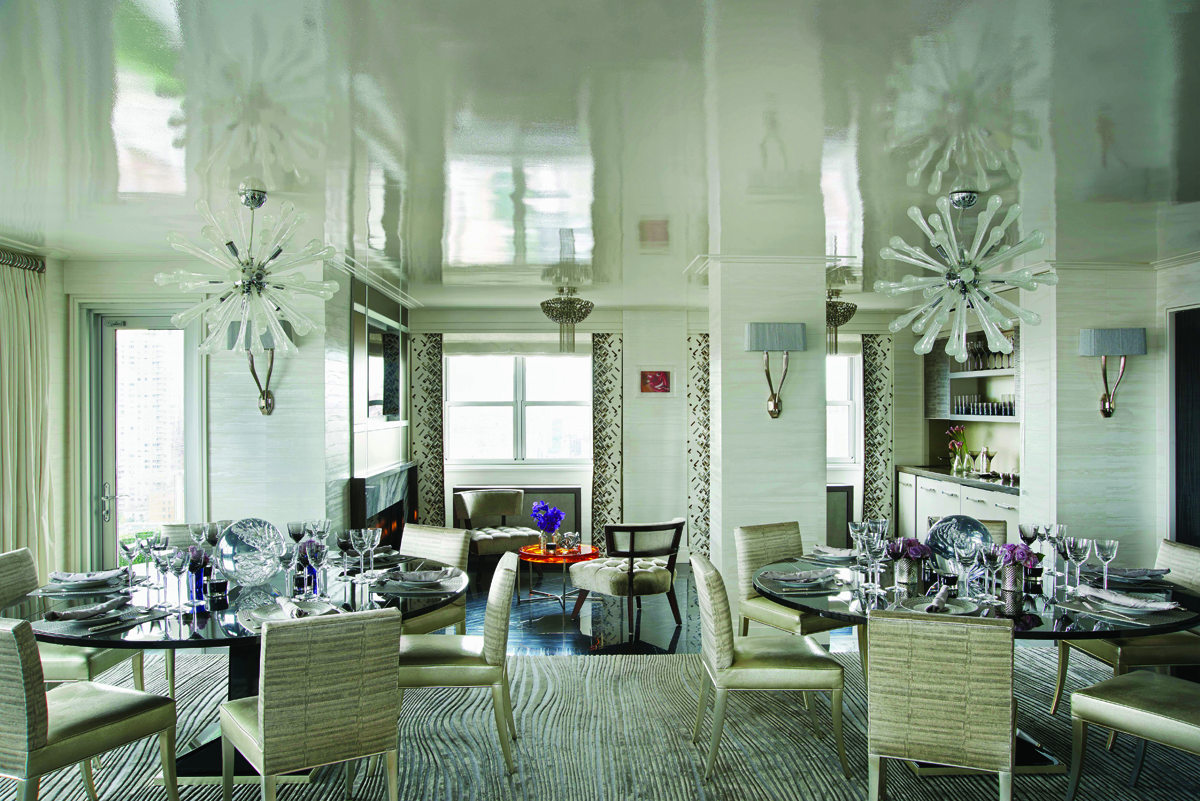 Muraled ceilings — à la Michelangelo — are making a comeback. “We just completed a luxury high-rise project in Manhattan, and we’re incorporating a striking black-and-cream abstract, muralesque wallcovering on the guest bedroom ceiling to emphasize the unit’s high ceilings in an artistic way,” Smith tells us.

A muraled ceiling may be the most difficult and most expensive application to pull off — but the results are worth it if you are seeking a truly one-of-a-kind look in your home. “Have fun with it,” advises Thomas. “Rather than trying to imitate an old master, have it be something tongue-in-cheek that captures the humor of the individual.” 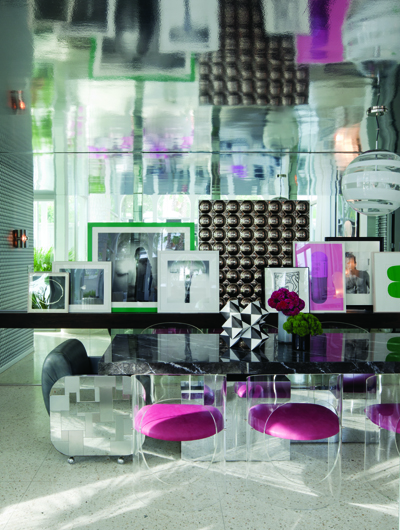 Mirrored or reflective ceiling papers are another favorite for Lawrence Bullard. “They add such depth to a space and always amp up the glamor,” he says. “You can achieve reflections that fool the eye into believing a ceiling is twice as high, thus upping the drama stakes and really capturing the imagination.” Rothblum likes to use antique mirrors because they’re “gorgeous in large panels on a ceiling and give a room instant moodiness.” Thomas also gravitates toward glass and mirrored accents above. “It’s about moving light around a space,” he says. “Matte glass will create glow. Regular glass will create sparkle. Mirrors will produce drama. The innovations in glass have allowed for so many choices that can be used on ceilings.”

A textured ceiling can also instantly glamorize a space, as it captures light and creates movement by drawing your eye up into a room. According to Stephen Pallrand, founder of Los Angeles-based design and build firm Home Front Build, the more traditional plaster strapwork ceilings are still being used, but his team is seeing increased use of modern graphic patterns and deeper colors. 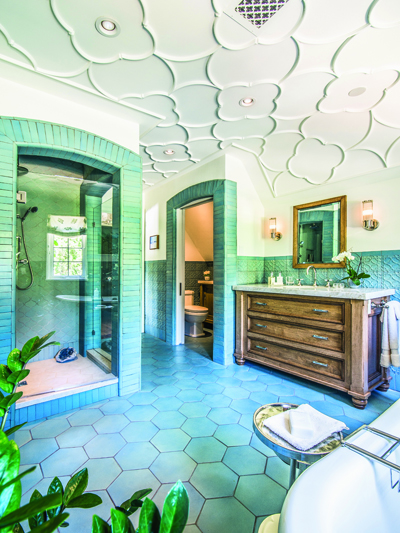 “Moving these ornamented surfaces into areas that have traditionally had less detail work is an exciting new avenue we have been exploring,” he says. “We have an in-house master plasterer, so quite often we use plaster strapwork and integral color plaster using traditional techniques. We also love using wallpaper with subtle patterns or texture.” To that end, Studio Gild has worked with everything from Venetian plaster to chunky textured metallic grasscloths or papers that replicate traditional leafing techniques. Smith takes a similar approach: “Abstract, subtle patterns like a faux plaster finish give a smooth and visually interesting texture. For instance, shagreen panels or gold leaf paper.”

And, with any pattern treatment above your head, it is important to consider scale. “Look at the overall size of the room and then scale the pattern to fit perfectly on the ceiling,” says Thomas. “To have a pattern randomly cut off takes away from the impact of a patterned ceiling.” 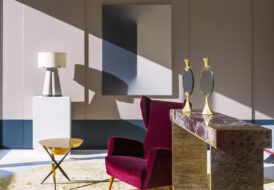 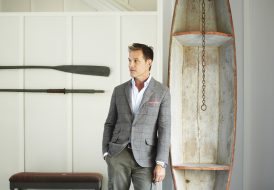 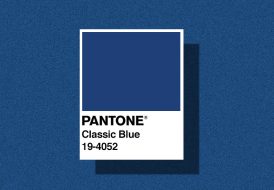 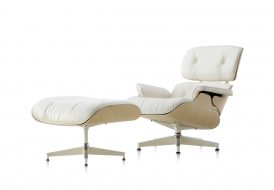