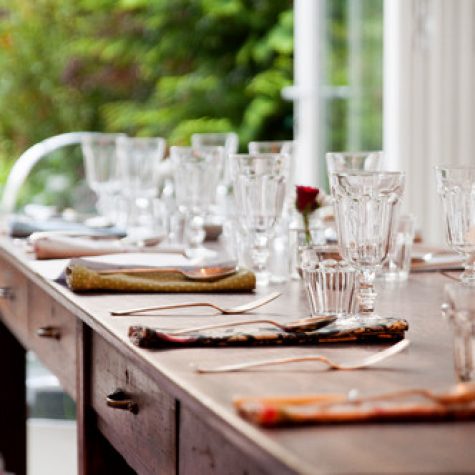 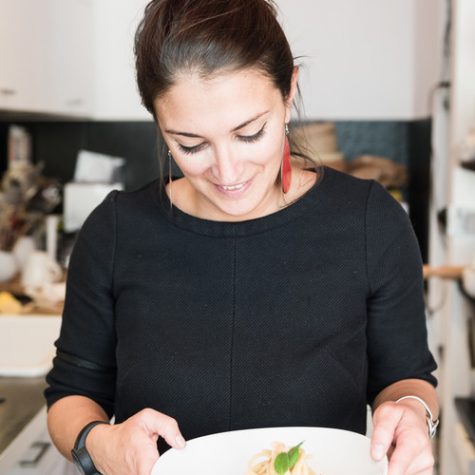 People around the world are more interested than ever in sharing experiences, spaces and objects for everyday use. They’re staying in strangers’ homes instead of hotel rooms when traveling, renting bicycles in the city instead of buying them, and sharing wardrobes and tools. A growing number of people are sharing meals too — hosting supper clubs in their homes.

Is it economics, changing attitudes, social networking or an interest in food that’s driving the growth of supper clubs around the world? We visited three supper club hosts in London, Rome and Stockholm earlier this year to talk with them about how and why they invite strangers to dinner.

Who entertains here: Chef and food writer Luiz Hara, who runs the blog The London Foodie and has written the cookbook Nikkei Cuisine: Japanese Food the South American Way

Why did you start running a supper club? “I worked as an investment banker in the City [London’s financial district] for many years, but in 2011, I left to pursue my interest in food and wine. At that time, I had already been writing my blog, The London Foodie, for three years and decided to deepen my skills in cooking. Following training in the Japanese cuisine in Tokyo, I returned to the U.K. and graduated from Le Cordon Bleu. After those experiences, I wanted to start practicing the things I’d learned and began to host supper clubs. At the first event, 14 people visited. Since then, things have been growing and growing.… Now I receive 30 people at every event.”

Do you have tableware for 30 guests? “Now I do – but that collection has been growing as well! I like to mix vintage tableware and modern food, and prefer to buy dining chairs, cutlery, decorations, plates and glasses in antiques shops and at flea markets, and also to find smaller objects abroad.”

What do you usually cook at your supper clubs? “The specific menu is always a surprise for the guests, but I usually serve eight to 10 courses, and the theme varies. I grew up in São Paulo, Brazil, with Japanese and Italian parents, so this food heritage has definitely inspired me, especially in Japanese, Brazilian and Nikkei cuisine. But since I’m trained in classical French cuisine, I can sometimes add elements of that as well.”

What are the most frequent topics at the table? “Of course, conversations about food. Most of my guests are foodies. Since I started my blog seven years ago, I’ve had readers from different continents, and many of them have visited my supper clubs when they’ve been in London. And London itself is a melting pot of cultures and new arrivals. My regular guests can be Australians, Brazilians, Singaporeans, to mention a few nationalities. Therefore we also talk about travels and restaurant experiences. ‘Have you been there, have you tried that?’ and so on.”

Since you are a professional chef, have you thought about opening a real restaurant? “I’ve got the question before, but one of the greatest things about supper clubs is the social interaction and the opportunity to get to know new people. And this is what makes supper clubs so different to restaurants, where striking up a conversation with a nearby table would be considered rather eccentric. I want to keep it private to retain control over the menu and the events.

“It’s very honoring for me that people are confident and open to trying new things, which gives me the trust to cook for them. The social part is also a big thing. It’s always satisfying to see a mixed group of strangers connect, exchange numbers and have a great time over my food. And over the years, many of the guests have become friends of mine. This New Year’s Eve, I actually looked around among the guests and realized that I have met some of my dearest friends in London supper clubs.”

Tradition With a Twist in Rome

What is it like to invite strangers into your home? “I’m always nervous. The first time I hosted a supper club was last summer, when I started my food blog. Opening my house to strangers is not easy. I don’t know anything about them: who they are, what they do, what they expect from me. Will they like my food? What will they think of my home — which is, of course, a part of me, built carefully one piece after another? It’s a kind of exam … but it lasts only for a few minutes, in the beginning of the evening. Then you break the ice, and usually things go on very well. We find our way, start talking, and then eating and drinking.”

What do you usually cook? “Of course I have Italian specialities on my menu. But I prefer to make a revisited cuisine, taking traditional dishes and transforming them into something new. For example, a typical lasagna but with asparagus, pine nuts and lemon. It’s delicious! I follow the seasonal products. Since I live next to one of the most characteristic markets in the capital, Testaccio, I always visit it in the morning to buy ingredients for that night’s supper club.”

Are your guests welcome in every room of your home? “It’s all open, since it’s a little apartment — [484 square feet]. A big living room is divided from the kitchen by a wall bookcase, which allows me to be ‘in’ the room with my guests and to cook without letting the people see all the mess in the kitchen. Apart from this, it’s only my bedroom with a walk-in closet and a bathroom. So, no walls to separate my guests.”

Did you have to stock up on anything when you started as a supper club host? “When I started my supper club, I had to buy additional cutlery and new glasses. But I used it as an excuse to play around and buy new things: plates, casserole dishes, various tools.”

What do you like most about supper clubs? “I love to have people sitting around a table, eating and chatting, sharing my passion for food, tips for travel, movies and books. At first, mainly foreign tourists visited my dinners. It was a deliberate choice since I’m a journalist of foreign affairs, and I’m fascinated by knowing people from other countries. They can tell me what they do and think, and open up my eyes about how it is to live elsewhere.

“Meanwhile, Italian guests have increased, thanks to word of mouth. If they are foreigners, they always ask me for advice about Rome, tips that cannot be found in the guides. And I’m more than happy to share and let them discover ‘my’ Rome.”

Mixing It Up in Stockholm

Who entertains here: Anna Nilsson, who works as a project leader at a retail agency
Dining room location: In an apartment in Södermalm, southern Stockholm

When did you start inviting strangers to your home for dinner? “I got the idea when the app AirDine was launched in Sweden in March. I have had three dinners so far and will host the fourth this weekend. When I invited people for the first time, it was with mixed emotions. It happened to be Easter weekend, so a few days before the dinner, one guest, who first accepted, had to cancel so suddenly, it was just me and one guest. It didn’t feel super exciting, but then another person signed up, and I thought the risk that there will be two maniacs is rather small. It ended up with the three of us having a great night! It was myself, a 27-year-old personal trainer and a 53-year-old communication director — three very different people, united by an interest in food and our curiosity.”

What do you usually cook? “The menu varies, and I like to mix it up. I often serve many small or midsized dishes. It’s mostly because I have a hard time deciding on exactly what to cook, but also because it’s fun to be able to offer several different dishes so you can have more flavors. I love street food abroad, where the maximized flavors really evoke magic in a simple and genuine way. Classic street food is usually the foundation of my recipes before I transform them into my own.”

How would you describe a night at your supper club? “In the beginning, there is always a little chitchat. My apartment has a highly personal interior style; I have filled my home with personal things and travel souvenirs, which quickly tend to become a topic of conversation. After half an hour or so, I invite people to the dinner table, where there is a written menu at each setting, and then I also explain the rules for the evening.”

Rules? “Yes, first of all, no one goes into the kitchen. It’s not unusual that it gets pretty messy in there when I’m preparing the dinner. And I mean, it’s not like you help the waiters to clear the table in a restaurant, so why would you do it here? Another rule is that the guests do not have to eat if they don’t like the food. They actually pay for the dinner I cook, and then it’s up to each one of them if they want to eat or not.

“If I only invite friends for dinner, it doesn’t matter if I happen to burn the steak, they will eat and be happy anyway. Here it is a different thing. At every guest’s seat, I have also prepared sparklers. At any time during dinner, the guests can light his or her sparkler, and then that person has the floor. So whether you want to change the topic, give a little speech or have your say in a discussion, you just have to light the sparkler.”

Why do you invite people? “Two reasons — the food and the encounters with people. I grew up in Skåne [in southern Sweden] with a mother who always cooked from scratch using real ingredients and a father who was a farmer — which explains my interest in good food. My curiosity has probably always existed.

“In Stockholm, I feel that many people just hang out with like-minded people, but these dinners are a way to try something new and maybe make your perspective a little wider. In addition, food unites people, and it’s fun for me to test new ideas in the kitchen and get a more honest assessment.”

Are there many discussions? “Yes! It’s one of the things I love most about my supper clubs — that strangers of different ages, backgrounds, professions and personalities must interact with each other. It becomes a bit like a reality show, and when the usual common denominators aren’t there, you quickly enter new conversational paths that you wouldn’t follow otherwise. Like phobias and political opinions. One is forced to stretch social boundaries. If it gets too hectic, I, as the hostess, can always break it up with a cool mango sorbet.”

Why do you think supper clubs have become so popular? “On the one hand, I think this is a backlash against anonymous chats and forums online. Now we want to meet up in real life again! And occasions where you can meet new people — we Swedes really crave them. It’s easy to go out among others, but then many of us still only hang with our friends and acquaintances. At supper clubs, you can taste great homemade food without standing by the stove yourself. I hope more people discover the charm of this.”

Tell us: Have you ever hosted or attended a supper club? What were your experiences?

More
8 Steps to a Perfectly Set Dining Table
World of Design: Favorite Recipes From Food Lovers Around the Globe