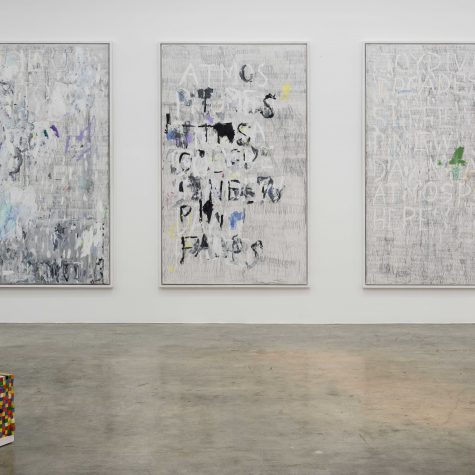 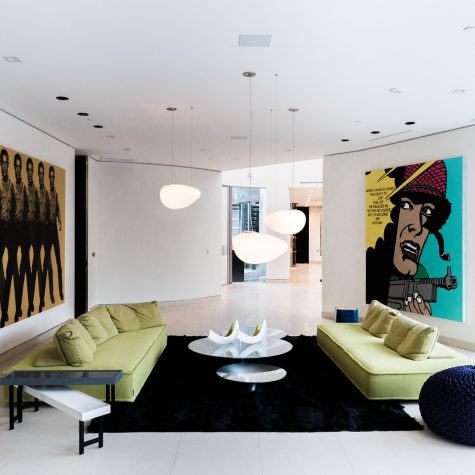 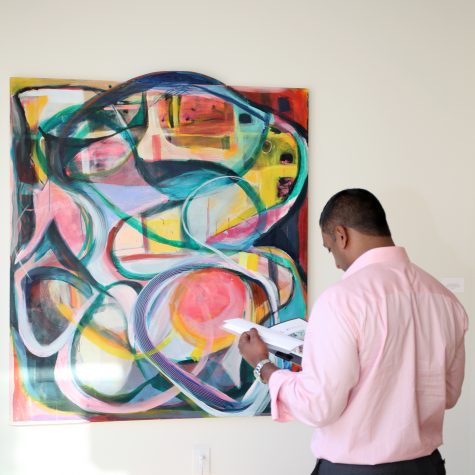 It’s deep in the night, well beyond traditional gallery hours, and Jason Vass is back in the storage room of his eponymous Los Angeles art gallery, sifting through Mark Dutcher contemporaries. Another high-end real estate agent has come a-calling, and soon the chosen pieces will be hanging in an L.A. manse for sale, in an effort to further elevate the property’s luxury potential and attract attention from high-end buyers.

Vass is among a select but growing group of artists, galleries, art consultants and stagers contributing to this latest marketing trend in high-end real estate. It goes a step beyond the more typical home staging, and it’s a trend that agents like Joyce Rey, executive director of Coldwell Banker Global Luxury℠ and one of the world’s leading real estate authorities, expects to continue to grow.

“The art staging trend applies primarily to the ultra high-end of the market — in the $20 million-plus category,” she says. “That is when a seller will begin looking at getting a better caliber of art in the house and start talking to gallery dealers and art stagers. Although we do see most professional stagers include art in their staging proposals, it’s typically prints, photographs and inexpensive originals. The more expensive the house, the more important the art becomes. The trend correlates to all of the new construction homes coming online in Los Angeles, and specifically Beverly Hills and the entire Westside area. All you have to do is drive down any street in Beverly Hills, and you’ll see the number of homes currently under construction.”

The natural parallel between the art world and high-end real estate has brought the trend across the country, where Nicole Bray, founder of Mercer Contemporary, a top New York art consultancy, curates art for luxury properties. 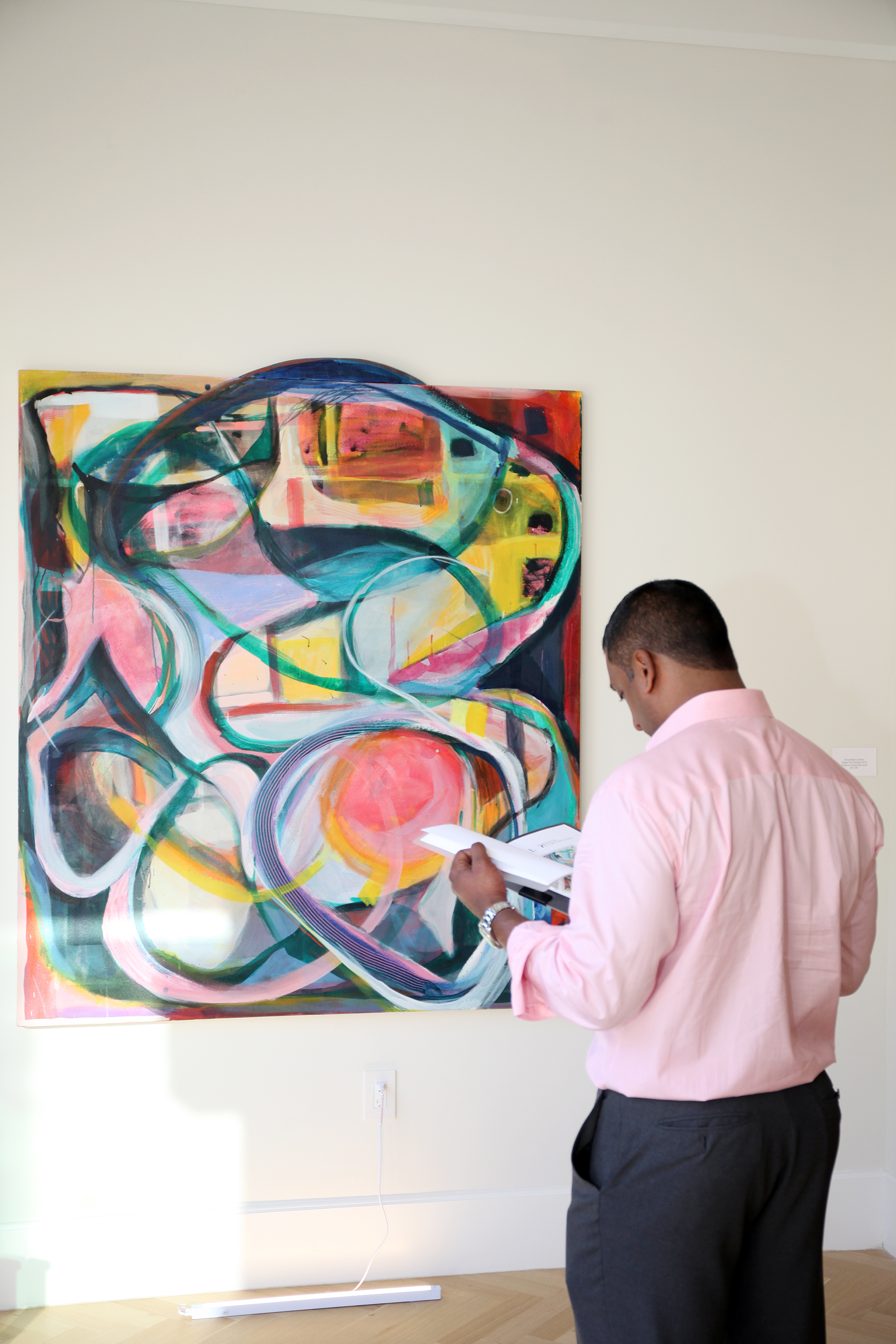 “Someone who has the disposable income for a $10 million to $15 million home very often is involved philanthropically with museums and is already tapped into high culture,” Bray says. “When you place your buyer’s name in the middle of a piece of paper and write around it all the different places he or she is going to spend leisure time, you will begin to map out that buyer’s involvement in cultural institutions and foundations. That person may be on the board of a museum, a collector of art and a world traveler. There is a definite trend toward placing art in some capacity within these high-end properties, whether it’s in an actual home or in a lobby or common area of a building. There’s a level of prestige that comes with having original art within a property; it elevates the perceived value. Architects, builders and developers are looking for distinguishing elements that bring exposure, and they are realizing what a great marketing tool art can be.”

It’s a phenomenon that takes on added significance in places like Miami, where real estate agents and developers are looking for ways to make their luxury condo stand out in sea of sparkling high-rises, while also stretching the connection between art and real estate forged by Art Basel Miami. 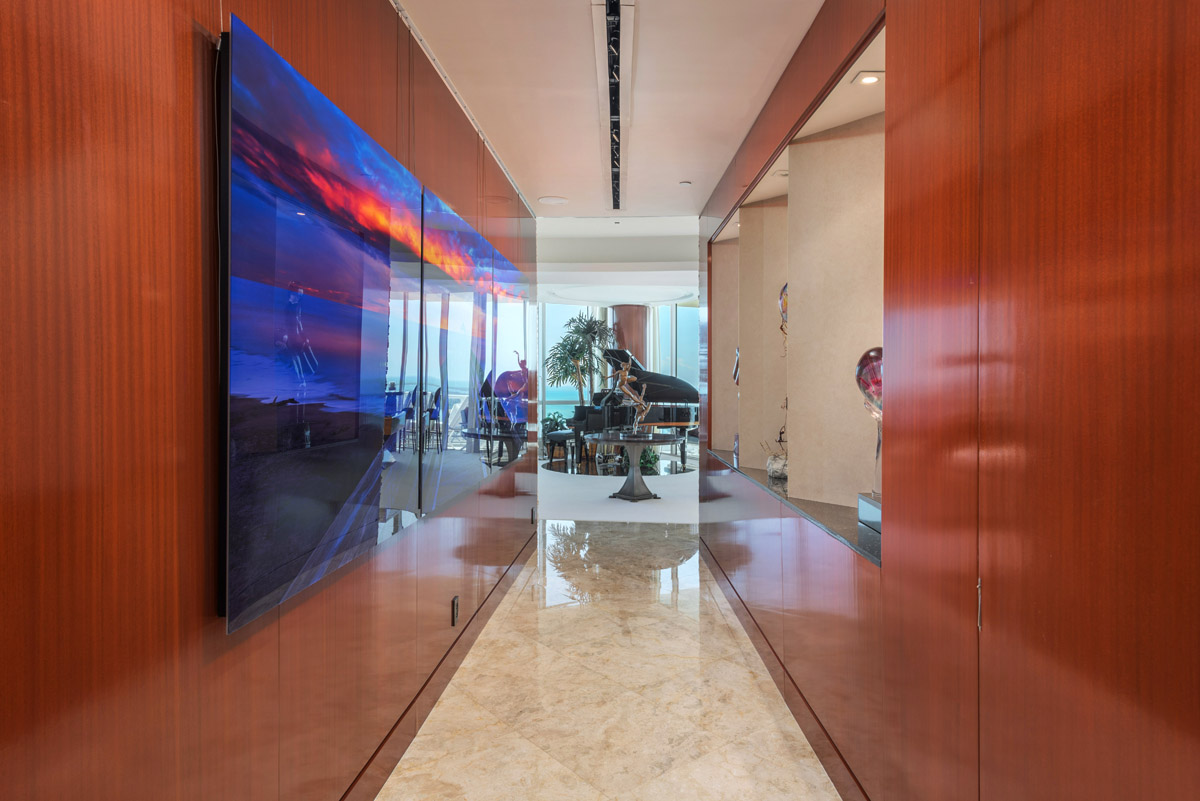 “A lot of what we’re seeing in Miami is in the new construction market,” says Forbes 30 Under 30 Realtor Danny Hertzberg of Coldwell Banker Residential Brokerage Miami Beach and The Jills®. “For a lot of these luxury condos, the new trend is to make a permanent art installation part of the sales initiative, which gives people an immediate sense of the luxury aspect. We’re also seeing the trend in staging companies, where, instead of putting TVs up on walls, even in the family room, they’re putting up works of art. Whereas buyers used to focus on where the TV would go, now they’re focused on finding a large gallery wall with sufficient natural light for their art collection. That’s partially the influence of Art Basel, which has brought some of the wealthiest people around the world to Miami. When they’re here for Basel, they’re often making significant purchases of art and property. The two are intertwined. It’s the Super Bowl of luxury real estate when the art show is going on here.”

For the artist or gallery owner involved in art staging, the end goal is, obviously, making a sale. But in the absence of such, the added exposure helps. “You never know when you do this if you’re going to sell anything,” says Vass. “There are no guarantees you will sell your art, and you are tying it up a bit. I have pieces in Ronald Reagan’s $33 million former home in Pacific Palisades that have been there awhile because the house is still on the market.” The upside, he says: The home was written up in both the L.A. Times and the Wall Street Journal, which means his audience among potential art buyers has grown, as has the publicity, which has led to more staging partnerships, inquiries and requests from Realtors and consultants. 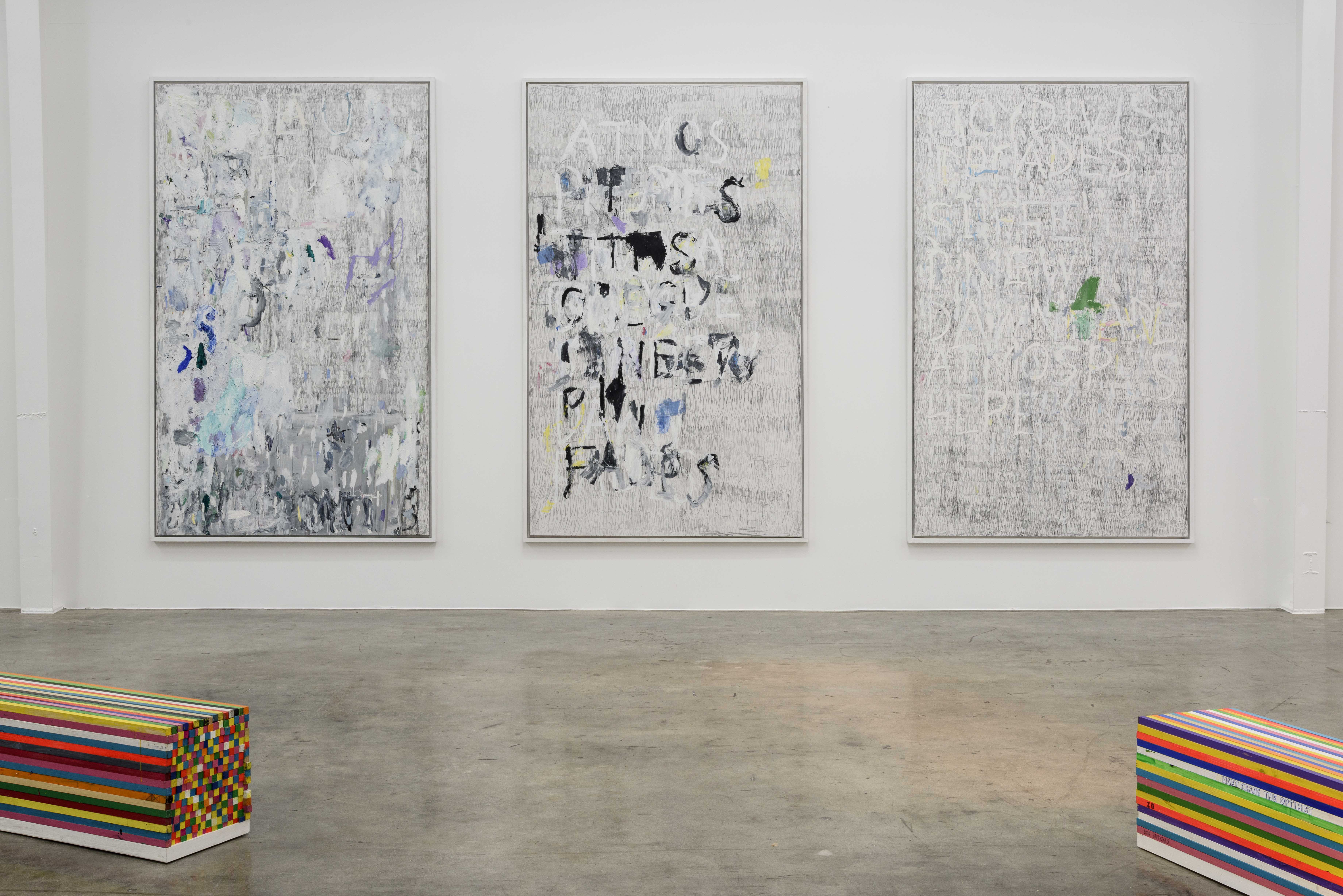 Noted artist Knowledge Bennett, who recently relocated back to California from New Jersey and is about to launch The Know Contemporary Gallery in L.A., famously sold three pieces after a couple of art collectors became smitten with his work that was staged in an open house in Venice. Bennett’s bold use of political and social subtext may not be what some would expect to see in an open house — “Art can sometimes be quite provocative or controversial (and rightfully so), and this might not work with the overall objective of the home seller,” Bennett says. Yet, in spite of his style or, more likely, because of it, Bennett is an in-demand artist for high-end Realtors and developers throughout the city. Among the 16 pieces from his gallery that are staged in a $23 million Bel Air listing are a few of his own celebrated works: “Obama Cowboy,” an Andy Warhol-inspired painting depicting former President Barack Obama as a gunslinger, and another featuring Marilyn Monroe wearing a front-tie bandana, à la Tupac Shakur.

With “fine art versus the generic commercial art installations, the homes become all the more memorable and capable of standing out within a saturated high-end home market,” says Bennett. “I’ve seen firsthand the positive effects artworks have had on homes and their ability to sell. Oftentimes, those who are in the market for high-end real estate are also in the market for new fine art acquisitions. L.A. is such a sprawling city that it could take years to get your work in front of some of these potential collectors. I’ve elected to take the art to the people.”

What kind of art helps sell a house?

Does a $40 million mansion demand walls full of Picasso? Not always. Yes, a $120 million spec house recently listed in Bel Air — and publicly flirted with by Beyoncé and Jay Z — is furnished entirely with art by Damien Hirst. And another $100 million property in Beverly Hills includes two Hirst originals (value: more than $2 million), as well as an Andy Warhol portrait of Muhammad Ali — not to mention a gold Lamborghini and a Rolls-Royce. However, most of Vass’ requests, whether his gallery’s art is dressing a $10 million mansion or one many times that price, are for “fine art and contemporary,” he says. “Some blue-chip or modern art, but mostly contemporary, mid-career artists.”

In New York, the art chosen may also be colored by cultural or historical reference, like in a recent show curated by Bray in a Greenwich Village penthouse for sale.

“University Place in Greenwich Village in the1940s, 1950s and 1960s, and places like the Cedar Tavern were renowned for Jackson Pollock’s brawls and Allen Ginsburg’s pontificating,” Bray says. “It was a meeting place for artists to come together and share ideas. It almost became a salon for artists of the time, and it was right around the corner from this property. I started drawing on abstract expressionists who brought Greenwich Village to life in those days and created a show with young, emerging artists with the same kind of gritty abstraction we saw back then. I look at art all day, every day. There were a number of artists I had in mind that I wanted to do a show with, all in abstraction, and it just naturally came together, with six artists and 11 works.”

Zaha Hadid’s One Thousand Museum features a rooftop helipad. Porsche Design Tower in Sunny Isles promises a sky garage. Standout amenities are key in the ultra-competitive Miami luxury condo market, where inventory was up 30 percent on Miami Beach alone in 2016.

Oceana Bal Harbour’s answer: an impressive installation featuring iconic American artist Jeff Koons that is not just elemental “to the property, but also the marketing and advertising,” says Hertzberg. These new luxury condos feature “a pretty significant, permanent installation, including ‘Pluto and Prosperina,’ a 10-foot stainless-steel sculpture” in the outdoor breezeway. “That piece has been used in collateral, in their pop-up store in Bal Harbour — it’s a real focal point.” Another Koons sculpture, “Seated Ballerina,” graces Oceana’s beachside gardens; both are permanently installed and owned by the condos’ residents. 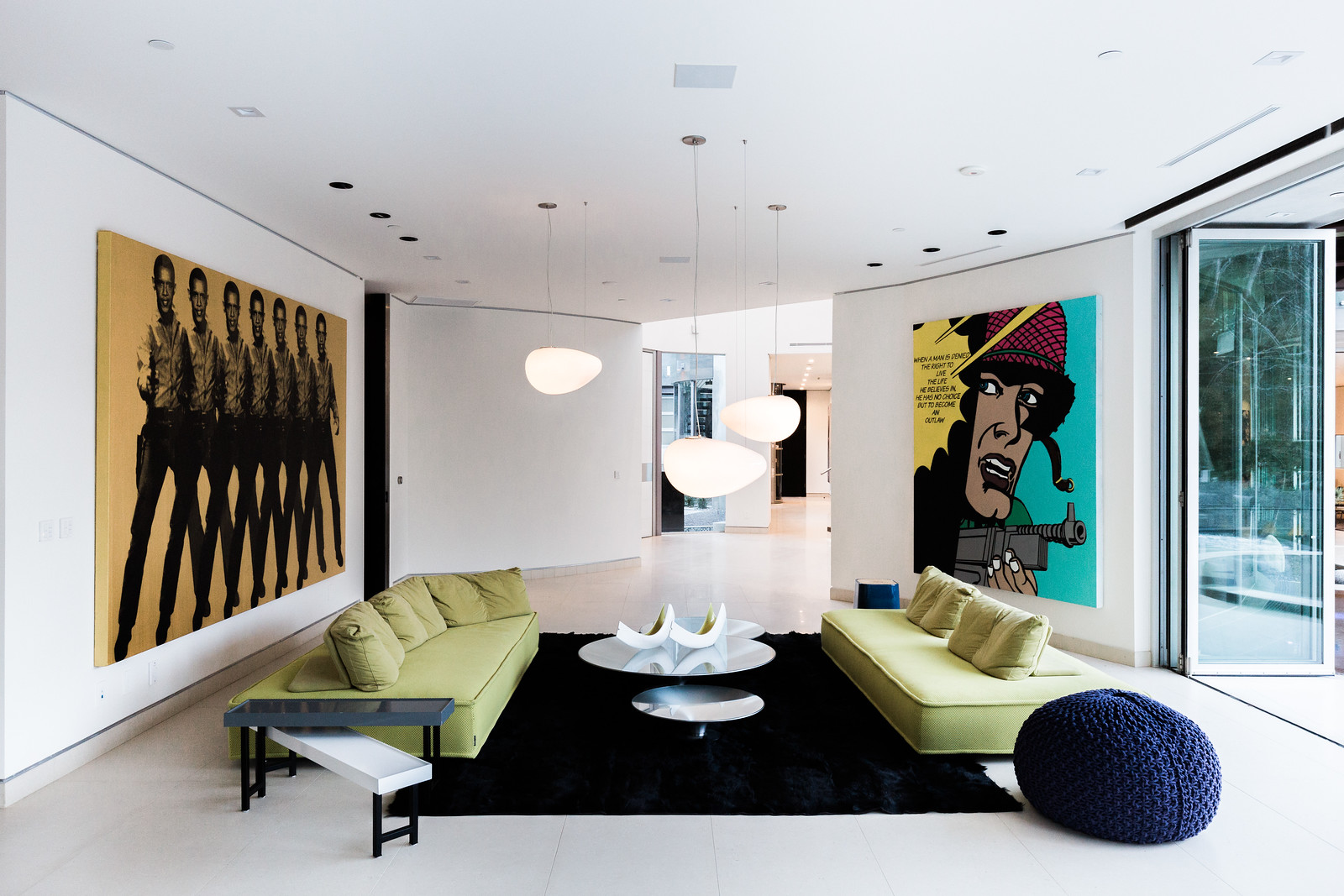 Faena Residences in Miami, a collection of 10 penthouses atop the Faena Hotel, went a similar route with their art, procuring works from Hirst and Koons, as well as from Alberto Garutti, Gonzalo Fuenmayor, Manuel Ameztoy and Juan Gatti, and then taking it a step further.

“Faena is not just a high-end residential project; it’s a billion-dollar arts district that’s being developed as a new luxury living quarter,” says Hillary Hertzberg, sales associate with The Jills. “The hotel is filled with these gilded pieces, including Hirst’s ‘Gone but not Forgotten,’ a nine-foot golden skeleton of a wooly mammoth. You get the feeling of the project — that it’s very rich, very luxurious and very driven by art — right there at the entrance, and that same strong art foundation extends to the district. It will be interesting to see how that is embraced throughout the life of the project.”

And what impact it may have on the industry as a whole, at a time when the intersection of art and real estate is creating fascinating partnerships in their mutual quest for new eyes.

Strokes of Genius: The Fine Art of Art Staging for Luxury Real Estate

Strokes of Genius: The Fine Art of Art Staging for Luxury Real Estate