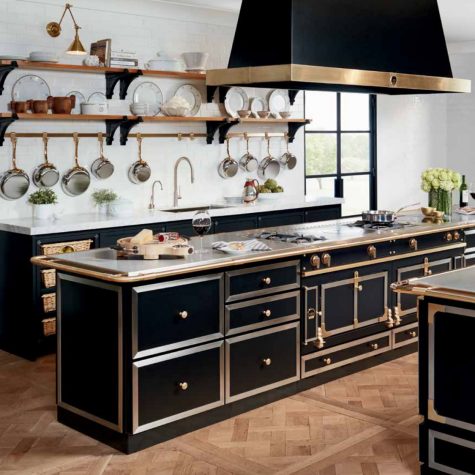 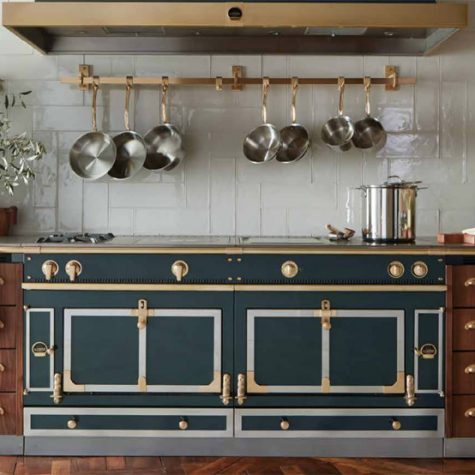 Pablo Picasso, Charlie Chaplin, Brad Pitt, Celine Dion, former French President Jacques Chirac, LeBron James, Ellen Pompeo, and the inimitable Julia Child. It’s a long and prestigious list, to be sure. But other than having achieved fame in their respective fields, what do these notable individuals have in common? They’re among those who have fallen hard for La Cornue.

People who love La Cornue do so for all kinds of reasons—some because of how the ultra-high-end ranges operate in the kitchen, some for how they set the space apart. For those who know the brand, owning a La Cornue borders on obsession. It’s not just a must-have; We have officially veered into icon status here.

So coveted is the renowned French “purveyor of handcrafted French ranges since 1908” that everyone from legendary chefs to a wide range of celebrities to discerning homeowners insist upon it for their kitchens. That despite prices that can easily reach the half-million-dollar range. Like a Rolex on the wrist or a Bentley in the garage, one would be similarly unlikely to quibble about price when it comes to La Cornue—such is the allure of this culinary status symbol.

In a story titled, “The Case for the $500,000 Oven,” Architectural Digest explained why these high-priced and, some would say, even more highly valued, items go beyond being a mere material item. “La Cornue, which has been handcrafting ovens for more than a century in the French countryside town of Saint-Ouen-l’Aumône, plays upon that emotional connection by engraving each range with a customer’s family name or crest, and offering customizable features that are completely personal, such as an indoor gardening system or wine cooler that’s integrated into the brand’s island module, ranging from $168,000 to more than $500,000.”

Julia Child was reported to have spent just $425 on her La Cornue stove, which was purchased in the 1940s. When she was leaving Provence, she was convinced to sell the beloved heirloom to Paris food critic Patricia Wells. “It’s like having Freud’s couch,” Wells said.

Randi Garrett, creator of Randi Garrett Design, lusted after the brand’s wares for years before finally adding a CORNUFÉ 110 in stainless steel finish with brass accents to her kitchen. At $10,450, “It was worth every penny,” she said. “I am no gourmet chef, but the things we bake and cook in it turn out fantastic!” 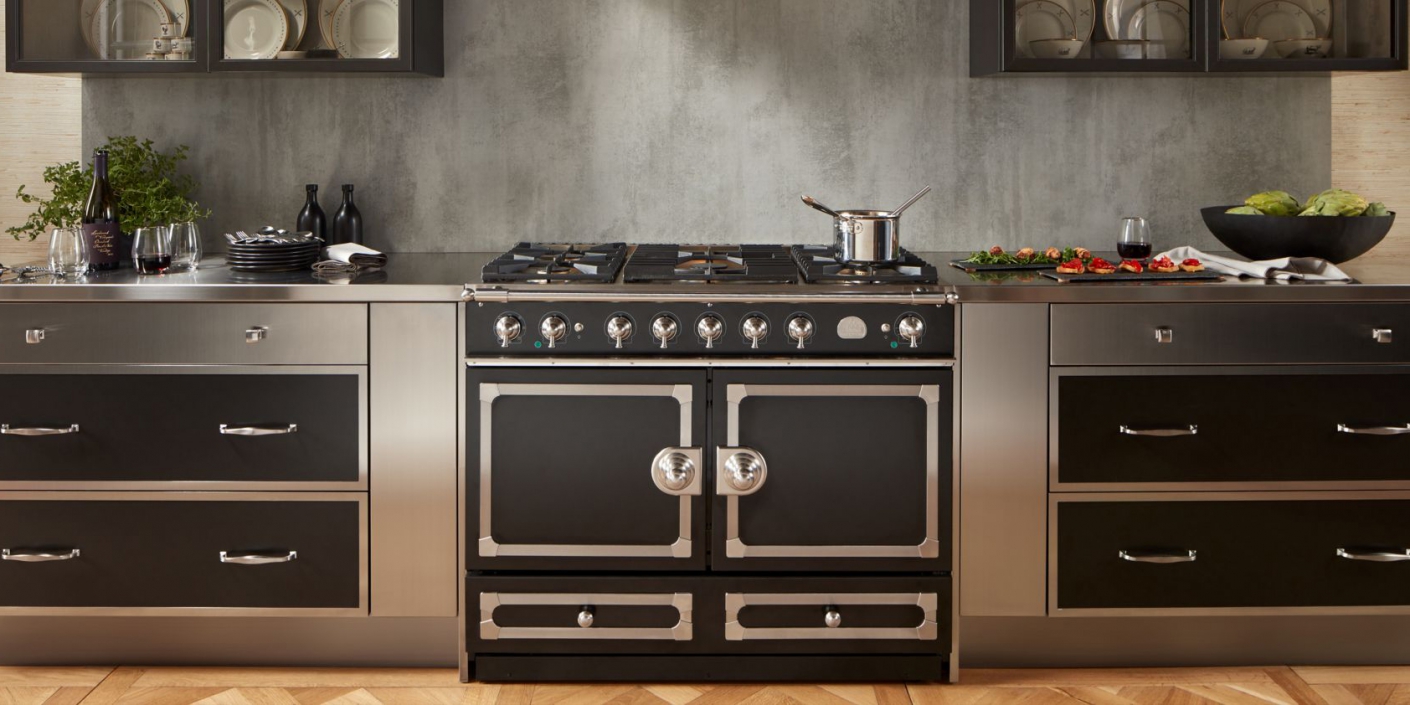 The granddaddy of La Cornue is the Grand Palais 180, part of the Chateau collection, and spanning nearly six feet with one gas oven and one electric oven. With seven range top configurations, buyers can customize to their specific cooking needs, choosing induction, teppanyaki, or even lava rock grills. There are 48 standard enamel or metal body finishes, customizable color options, and multiple trim options. This range starts at $59,100. 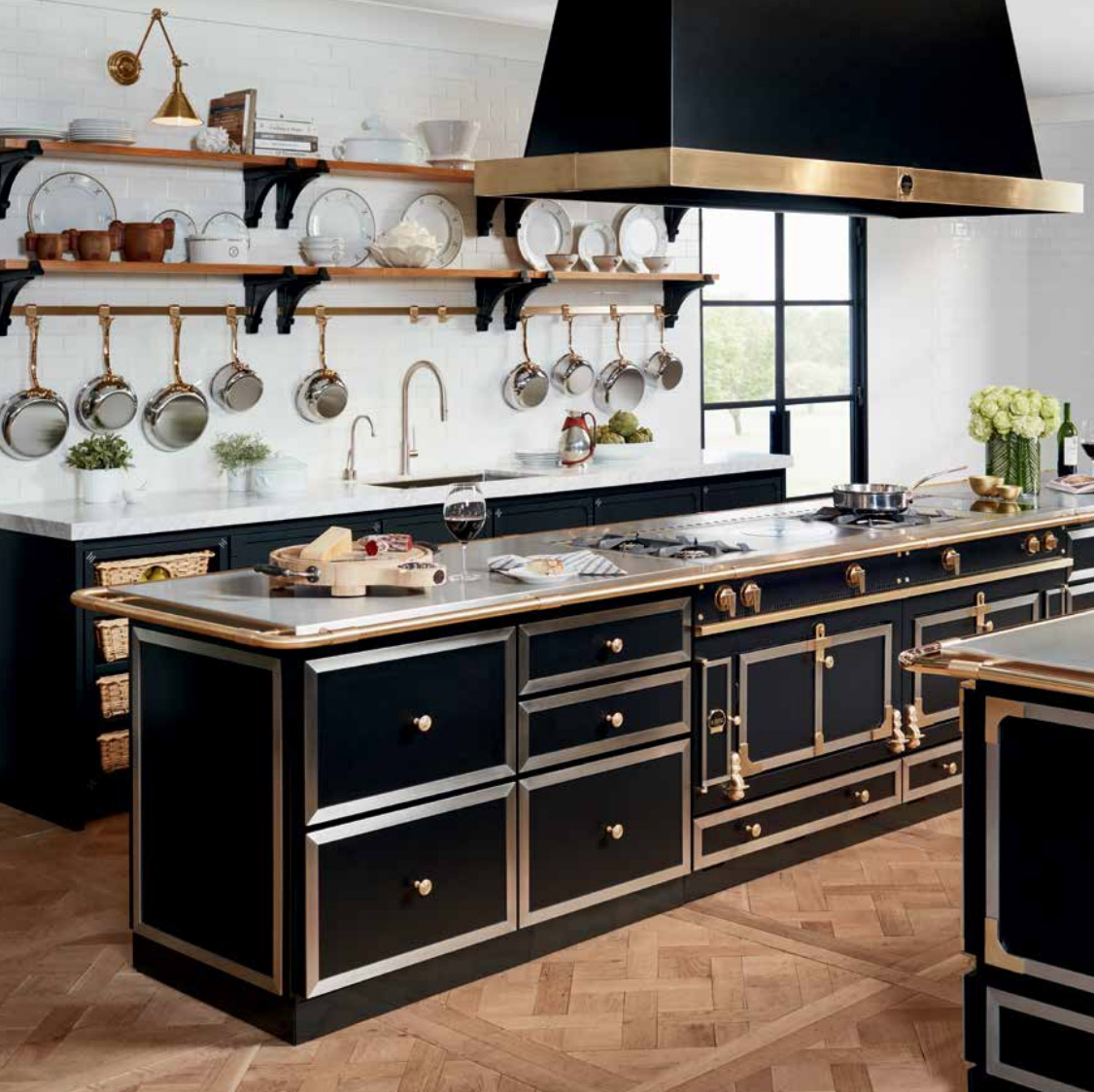 Choose a black Grand Palais 180 La Cornue range with stainless steel trim, a rotisserie, and matching cabinetry that stretches the entire perimeter of your immense kitchen, all set off by a Carrara-marble backsplash, of course, and you have actress Pompeo’s luscious space. The kitchen is part of a 16,000 square-foot Mediterranean villa in the Los Angeles neighborhood of Los Feliz that was renovated by designer Martyn Lawrence Bullard and featured in Architectural Digest.

“Ellen grew up in Boston, came from a very poor background, and she told me when we first started this venture that she had lived in an apartment with a hideous, old, falling apart kitchen, but she had a picture of a La Cornue stove that she pulled out of a magazine and pinned to her kitchen wall,” he said. “It was kind of like her dream wall; she would walk into this dodgy old kitchen and see this amazing La Cornue. And so, after ten seasons of Grey’s Anatomy and becoming the highest paid television actress in America, I said to her, ‘Forget just getting the La Cornue, let’s get the whole kitchen.’ And it’s amazing, because it’s really become her pride and joy.”

Such is La Cornue, revered not just as a culinary tool, but as a piece of art. A piece of home.

You can explore the wide range of options on the La Cornue website or see finished kitchens featuring the brand on their drool-worthy Instagram.