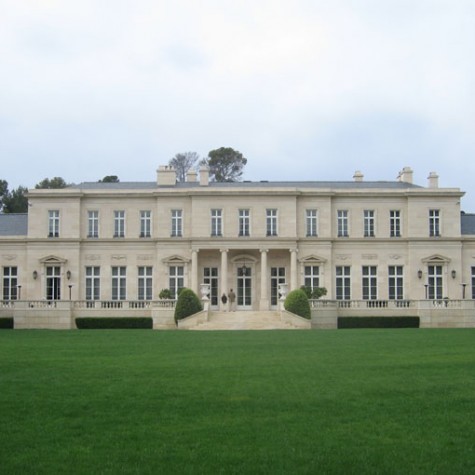 The arch of a window, the curve of a ceiling, the balance of pure symmetry: this is the language of love for an architect. Richardson “Rick” Robertson III has extended that language, letting his residences to speak through history—through what he calls “the New Beaux-Arts idiom.” While the Beaux-Arts has traditionally been an interpretation of historic styles such as Classical, Robertson has expanded it to include contemporary regional styles, such as Spanish Colonial in California.  So, his residences over the last 25 years have become timeless and enduring stories in the region’s architectural heritage. If romance could be found in architecture alone, it would be this spirit of “wholeness” that Robertson achieves in his homes time and time again.

Robertson is perhaps best known for his work on Fleur de Lys, the palatial Los Angeles estate designed for David and Suzanne Saperstein. You might be asking yourself what could be romantic or intimate about a palatial 35,000-square-foot estate with 100 total rooms, but the romance of the property lies in its legendary status throughout the world. Robertson’s design earned France’s highest cultural award in 2003, which was given by the then-president of France Jacques Chirac. As he explains: “Fleur de Lys was conceived as a decorative-arts museum, giving that estate its ‘raison d’être’.”

Previews Inside Out recently spoke to Robertson about how the new Beaux-Arts style inspires his affluent clients’ raison d’être.

Previews Inside Out How important is it to you that the homes you design be a part of the heritage of the region in which they are built?

Richardson Robertson III To me, it is very important that the homes become part of the heritage of the region (more so than the neighborhood) in which they are built.  Most of my residential projects have been in the luxury market—Bel-Air, Beverly Hills, Malibu, Chicago’s North Shore, Highland Park in Dallas and Westchester County along the Hudson River, among other cities across the United States—and that is probably where the common denominator is limited.  There is a myth to what each of these communities is.  Likewise, there is a unique character to each community that has come about because of many different influences’—the terrain, the vegetation, the topography, the weather, the coloring, the ethnic background, the heritage and history are all examples that have an impact on what this myth is.  And I say ‘myth’ solely because I find that myth and reality often do not match.  However, when you hit the crescendo of the myth with the design of a house, it proves to become an instant triumph in the community.  And as such, becomes part of its ongoing heritage.  That is what is important to me.

Previews Inside Out How do you balance the need to have historical context with a 21st century lifestyle?

Richardson Robertson III All of my houses are meant to be lived in.  These houses stand in witness to the richness of the rituals of American life—the holidays, Fourth of July, Thanksgiving, family births, debuts, weddings—in a way that the Modern house is not able to because of its sterility and lack of embracing human life as a messy process.  The irony in my saying this about my work is that the most famous of my houses, Fleur de Lys, is perceived to be a difficult house to live in—if that were its intended use.  It was designed as a decorative-arts museum and as a civic house, and that is what it is in reality—a museum, not a house.  But having said that, Fleur de Lys, because of its style and magnitude, does attract a lot of attention as a destination for civic events, i.e. the ceremonies of the city.  That estate has definitely become a pinnacle place of international prominence.

Previews Inside Out What was your inspiration for

Richardson Robertson III Although most publications have stated that the inspiration for Fleur de Lys was either Versailles or Vaux le Vicomte, neither was.  You are the first to have actually asked me that question.  The inspiration came from the ‘Gilded Age’ mansions at Newport, Rhode Island—especially The Elms and Rosecliff, which I think is so obvious that I am surprised no writer has made that connection.

Previews Inside Out In your opinion, how does the concept of luxury living play into the Beaux-Arts style?

Richardson Robertson III Historically, the Beaux-Arts style and Classical architecture, in general, have been evocative of success and accomplishment, whether it is expressed in a public library, a bank headquarters, a university building or a house.  Success and accomplishment—whether achieved financially or socially—imply luxury.

Previews Inside Out What are your favorite architectural elements for conveying a sense of luxury?

Richardson Robertson III Probably not what you are expecting, but the answer is correct proportion.  The use of the appropriate material is a very close second.  Anything will feel ‘luxurious’—even the most simple—if these two qualities are achieved.

Previews Inside Out What are some of the most inspiring cities in the world for Beaux-Arts style buildings?

Richardson Robertson III I have a personal survey running.  When I meet an architect, I ask, “What do you think the most beautiful city in the world is?” Regardless of the architect’s type or style of architecture, the classical city of Paris is overwhelmingly considered to be the most beautiful of all world cities.  The classical Champs-Elysees, even at over two-hundred years old, remains the most beautiful, fashionable and continues to be relevant even as styles have changed decade after decade.

Previews Inside Out If you were going to purchase a Beaux-Arts style home today, what would be the one element you would look for?

Richardson Robertson III First of all, I would never purchase a house at all.  I would build it.  It is much easier to find the right location than it is to find the right location with the right house on it!  But I do realize that is not the intention of your question. To continue with my own thought, as an investment, I would say:  1) Beaux Arts will never go out of style and 2) I would look for a major gate at the entrance, which could be a major expense in and of itself, and will add significantly to the value of the property.  I venture to say that the money invested in that gate at the street will have the biggest return on money invested.

Previews Inside Out Tell us a little about how you might bring a sense of romance into some of the more private living spaces you’ve designed.

Richardson Robertson III Because these homes are meant to be part of the ceremonies of a family, all of them embrace the everyday events of life.  However, I have designed a few homes that I think everyone would feel are romantic.  One house, designed for a director for animation movies at Disney and his wife, was a French-style chateau on a 4-acre promontory at Lake Arrowhead.  They had lived in Paris and had a great affinity for everything French.  In response to their desires, we built a French chateau.  But it was built of the rubble granite that was quarried from the banks of the lake, and then piled with the largest boulders at the bottom to the smallest at the tops of the walls.  These rubble-granite walls of the ‘chateau’ appear almost as melted wax in their alpine response to the heritage of the Lake Arrowhead village and to the national forest that surrounds the house.  At least it was my interpretation of my imagined myth of the snowy mountain resort outside Los Angeles.  It is one of the most awe-inspiring, glamorous and romantic settings of contrasting environs—the vast city below, with the alpine national forest high above—placed side by side.

Previews Inside Out And if you had to pinpoint the main difference between your male and female affluent clients, in terms of what speaks to them in architecture—what would it be?

Richardson Robertson III Surprisingly, there is no significant difference between desires.  Of course, there are exceptions. But as a generalization, all of my clients have been married and either the husband or the wife has dominated the decisions of what the architecture would ultimately be.  I would say it was not always a consensus between the two of them. However, having said that, I do like to include the less dominant of the two, because they will both be living in the house, after all!

Richardson Robertson III (aka Rick Robertson) is the founder Robertson Partners, an architecture and design firm that specializes in creating upscale private residences in a variety of revival styles. In 2003, Robertson received the Los Angeles “Architect of the Year” Award, the Stars of Design Award and the French Design Award, Chevalier de l’Ordre des Arts et des Lettres for Fleur de Lys.

State of the Arts: Conversation with Richardson Robertson III

State of the Arts: Conversation with Richardson Robertson III