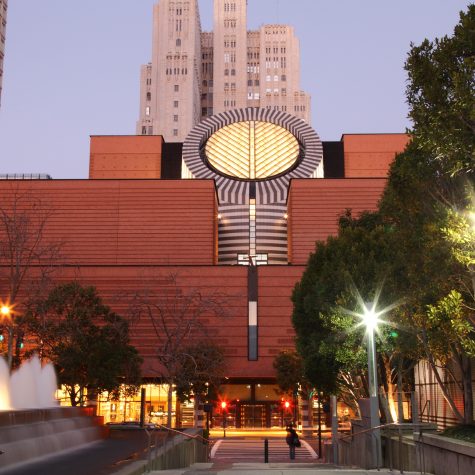 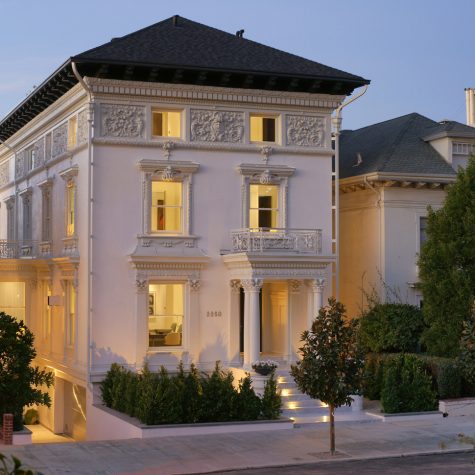 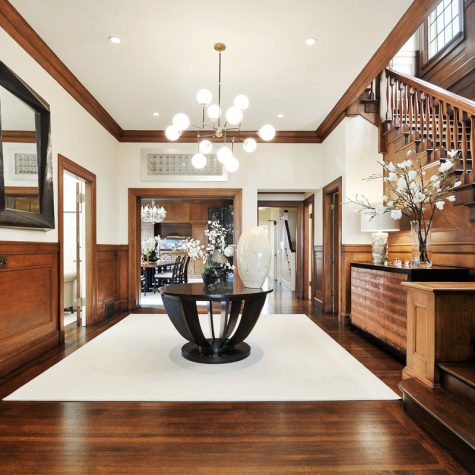 When the San Francisco Museum of Modern Art (SFMOMA) reopens on May 14 after a three-year absence, little about the changes will be sedate. Which is exactly as it should be for what will now be the largest modern museum in the world, thanks to the new 10-story addition from Norwegian architectural firm Snohetta that has nearly tripled the museum’s gallery space.

In an area that already boasts some of the world’s most impressive landmarks, the reimagined and expanded museum will stand as one of the finest on the planet. So what better time to take a look at some magnificent San Francisco listings that aren’t just museum-worthy, but are also located within easy visiting distance?

It’s not hard to look at the museum’s exterior and figure out where Mario Botta’s 1995 red, black, and white symmetrical structure meets Snohetta’s towering asymmetry with a love-it-or-hate it striated façade. But that’s hardly the only place the museum has merged old and new.

It was 1935 when the SFMOMA first opened, then housing its initial artworks—most notably, hundreds that had been gifted by Albert M. Bender, noted art patron of Ansel Adams and Diego Rivera—on the fourth floor of the War Memorial Veterans Building in the heart of the city. Soon, works from Rivera, Frida Kahlo and Henri Matisse were added, and the museum was hosting Jackson Pollock’s first solo museum exhibition.

The sheer amount of new square footage at the museum paved the way for an explosion of new art from Francis Bacon, Balthus, Pollock, Twombly, Rauschenberg, and the Doris and Donald Fisher Collection, on loan to the museum for 100 years and including works from Andy Warhol, Ellsworth Kelly, Alexander Calder, Roy Lichtenstein, Agnes Martin, and Serra; they share space with the “old favorites”—Matisse’s “Woman in a Hat”; Kahlo’s celebrated portrait of herself with Rivera; various Pollocks and Rothkos and Rauschenbergs. 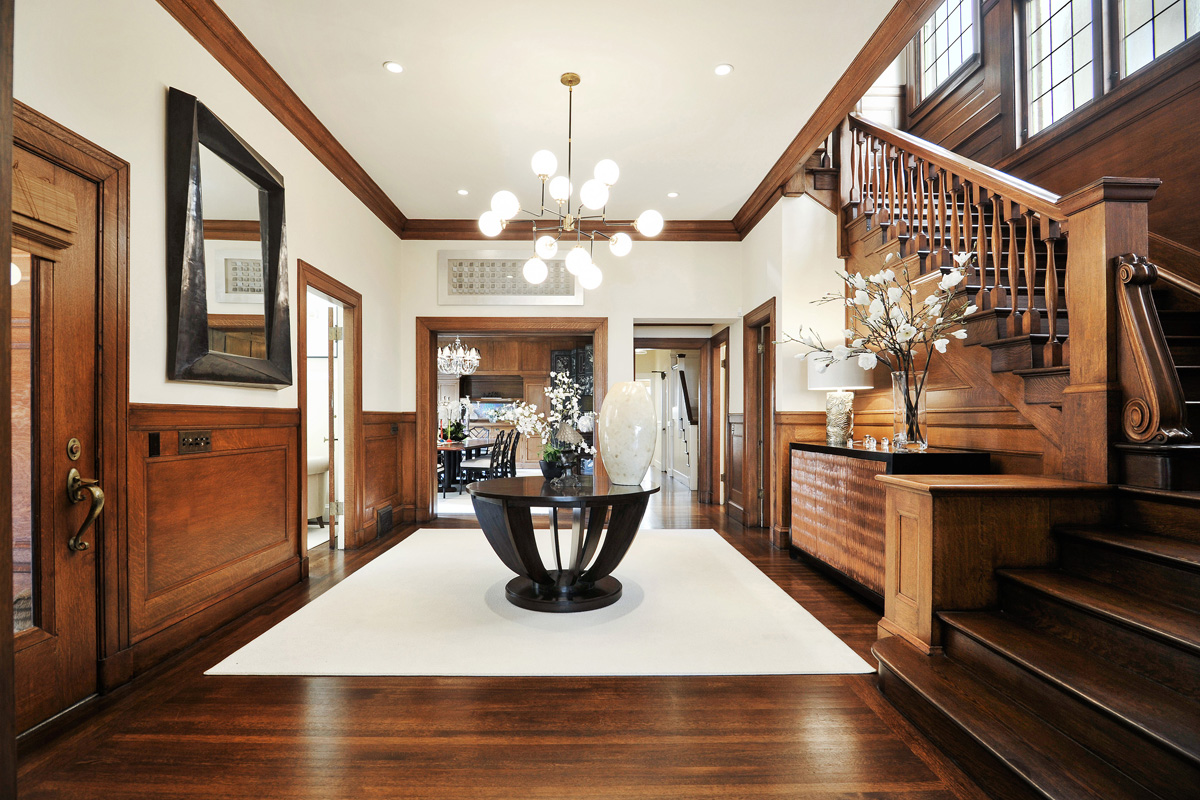 The stately historic landmark blends the grandeur of a bygone era with modern luxury, having been meticulously renovated, restored, retrofitted, and updated. Original architectural details remain, from the gilded front gates to the rich wood that graces the formal foyer and grand staircase, to the herringbone floors.

The new kitchen has been appointed with the ultimate in today’s gourmet amenities, with custom cabinetry, top-of-the-line appliances, and a wall of French doors opening to a covered terrace, yet its classic white marble and luxe finishes seem right at home in this storied place. A mix of formal and casual entertaining spaces, sumptuous bedrooms and baths, and a dining room fit for a society event—a celebration of art, perhaps?—showcase the richness of this exceptional property while bridging the something old, something new that is so essential to the realization of SFMOMA.

One of the most talked-about features of the new museum is its new technology—namely its app-based audio tour.

This is not your standard museum tour, where you tap a button to learn more about a specific piece of artwork, fumble around with an outdated piece of equipment, or are forced to wear a tacky lanyard. Instead, the museum’s app-based tour offers guided narratives and immersive walks through the museum (and surrounding neighborhood) hands-free.

Developed with Apple and SF start-up Detour, the app can detect where you are thanks to location-aware technology. Wired was so impressed they said, “The SFMOMA’s new app will forever change the way you enjoy museums.”

You can forget about stodgy commentary too; the tours are voiced by a collection of eclectic individuals (French tightrope walker Philippe Petit, HBO’s “Silicon Valley” stars Martin Starr and Kumail Nanjiani) servicing equally eclectic tours, debating art movements, and even doing play-by-play of the museum’s collection (members of the San Francisco Giants’ organization).

Many of today’s most spectacular homes also integrate state-of-the-art features and the most current amenities into the offering, like this modern minimalist home in San Francisco’s Potrero Hill neighborhood. Like SFMOMA, this fully renovated home located at the top of the hill and featuring view spanning downtown, the Bay, and Twin Peaks showcases the best of today within the context of beautiful surroundings. 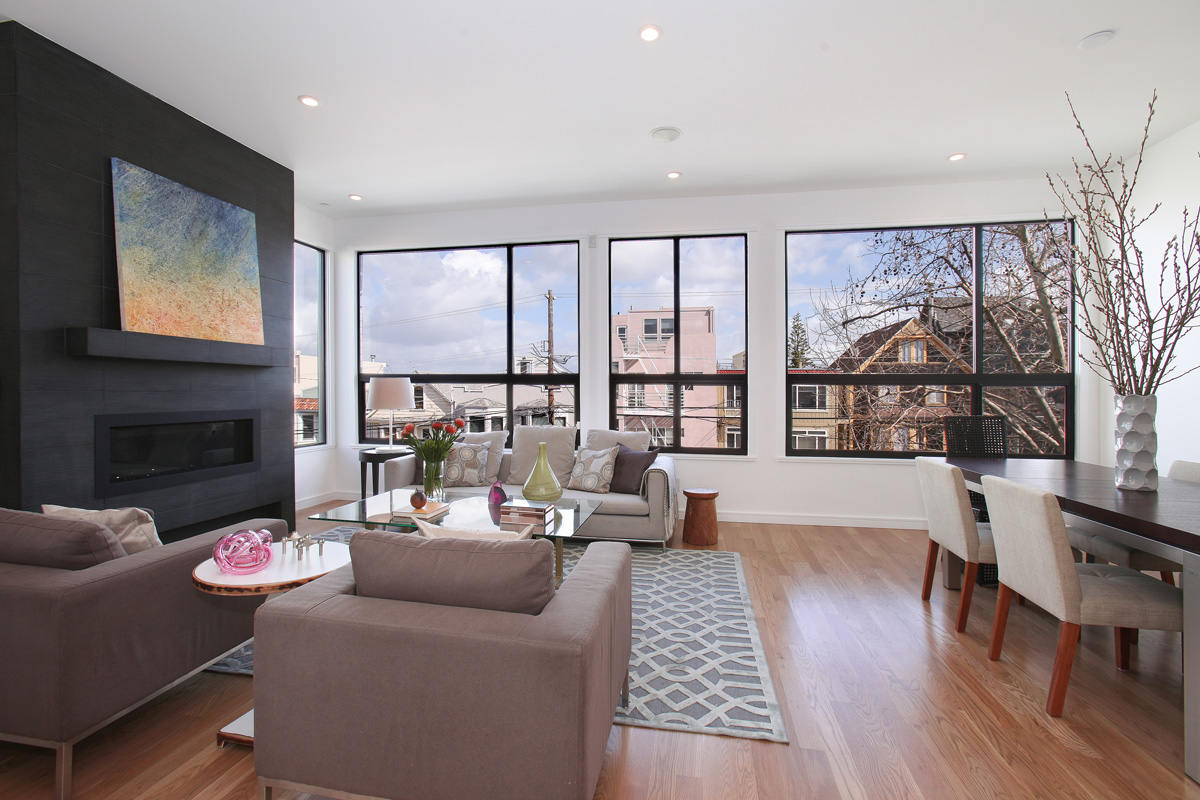 This home is filled with some of the most technologically advanced and eco-friendly features, including solar electric by Luminalt, radiant heat throughout, Tankless water heater, and built-in pre-wiring and speakers. Innovative architecture and sleek details carry the modern feel throughout the home’s three levels and approximately 4,000 square feet.

On the garden level, a separate legal studio/office has a modern kitchen and its own garden access through a sliding glass wall. The top floor features voluminous ceilings, an open floorplan with a large living and area, fireplace, wet bar, city views, and a gallery hall—perfect for showcasing art inspired by a trip to the museum.

Between are gracious bedrooms, airy living areas, and a

James F. Dunn is considered an artist in his own right. His fancy facades dress some of the most admired residences in San Francisco, perhaps the most remarkable of them gracing this remarkable Pacific Heights estate. 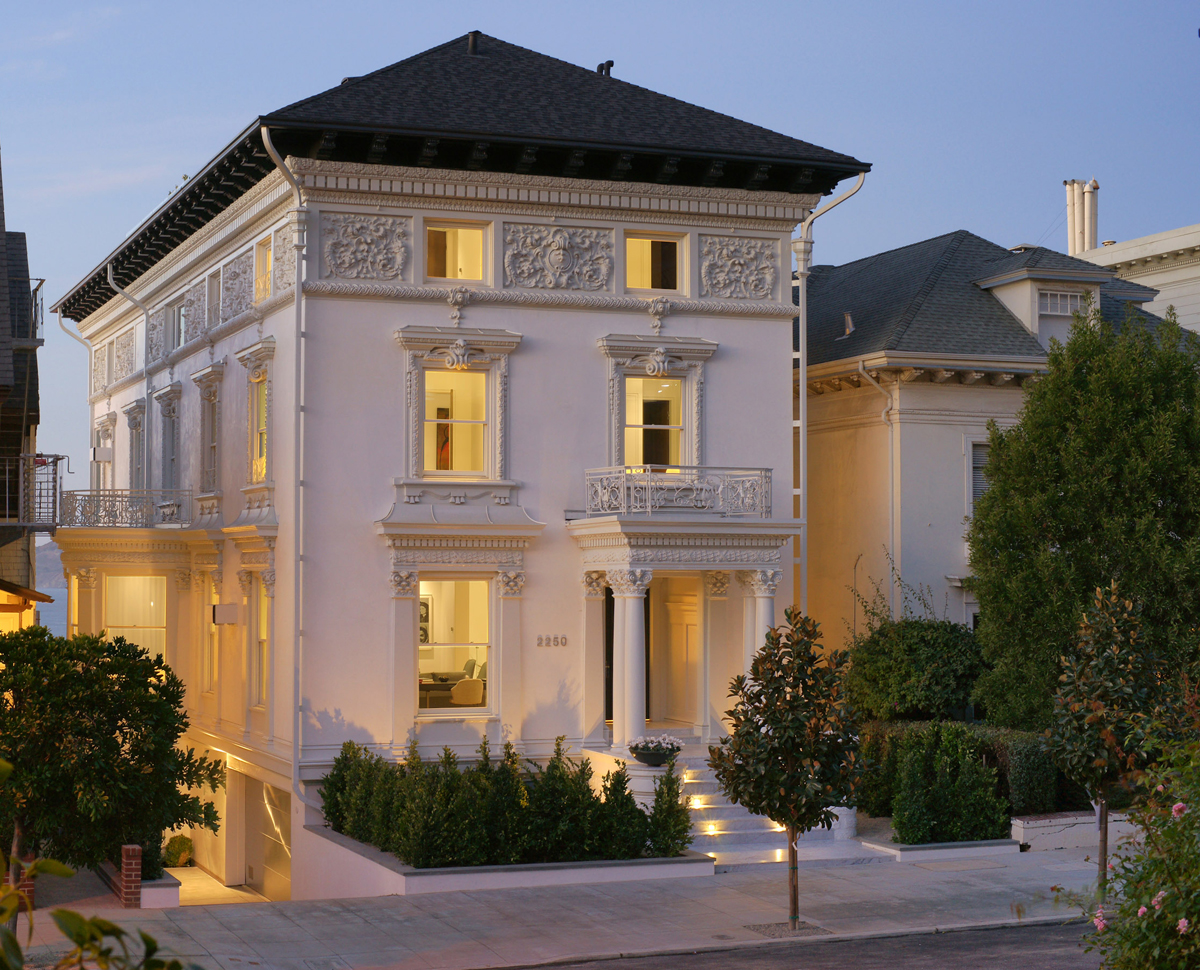 Here, a touch as distinctive as any master has created intricate yet gentle detailing that distinguishes the home from its grand neighbors. Surrounded by some of the most architecturally significant homes in the area—a mission revival mansion here, a “painted lady” Victorian there—this beaux arts manse manages to stand out, even in with its all-white palette—thanks to ornamental embellishments including numerous friezes, cornices, and corbels, plus a grand portico over a double-door entry bookended by Corinthian columns.

A two-year, whole-house makeover preserved and restored the most precious details of the home, bringing the exterior back to life. Meanwhile, the 9,095-square-foot interior was recreated, opening it up to reveal an airy plan with sightlines from the front door through the home and out to some truly stunning views spanning the entire San Francisco Bay, the Golden Gate Bridge and Marin Headlands.

Artistically crafted details throughout the home — modern lighting elements, slab fireplaces, marble waterfall-edge kitchen island, turnkey furnishings from renowned Italian designer Minotti — further set it apart. And then there’s that staircase. With hardwood treads, winding glass-panel railings, and an oculus skylight, the elliptical staircase that connects one floor to each other is so exquisite it’s one of few details that could actually steal attention away from those views.

It’s more than function. It belongs on display. In a museum. Know of any place good?