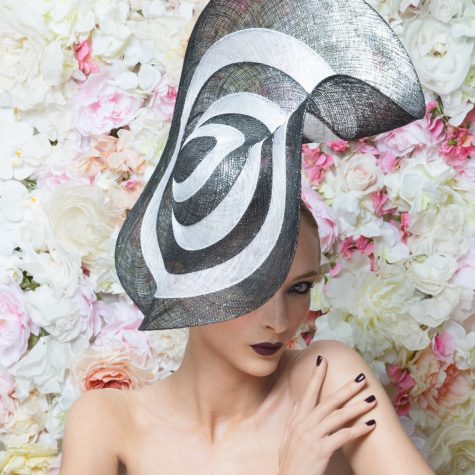 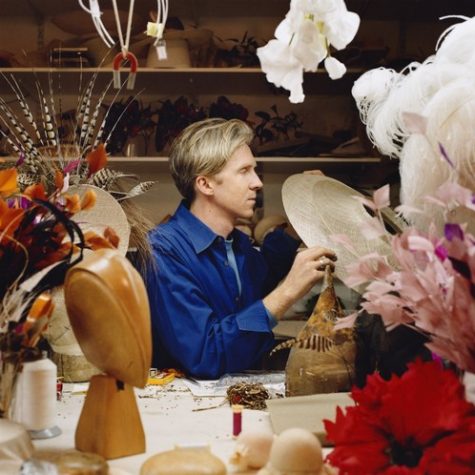 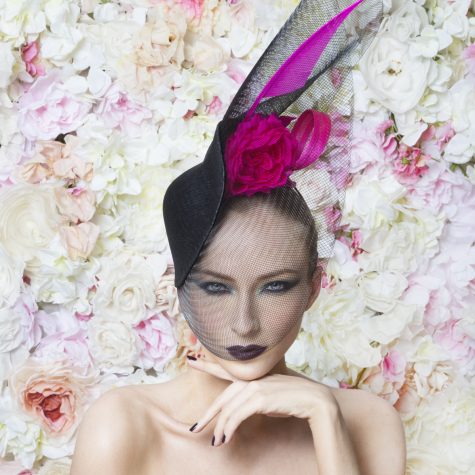 The sculptural, mixed-media masterpieces of hat designer Philip Treacy have now graced the heads of the world’s most elegant women for over 25 years. With bent and twisted bands of stiffened horsehair, ink-like swirls of raven-black plumes and a myriad of florals, tulle and festoons, the 55-year-old Irish-born designer has single-handedly created an entire vocabulary, a visual vernacular that has set the standard for what spectacular means. Whether it is at blockbuster events like Royal Ascot, high-profile weddings or the chicest of private special occasions, a Philip Treacy hat has the ability to transcend its role as an accessory, becoming a three-dimensional expression of the style and good taste of its wearer. 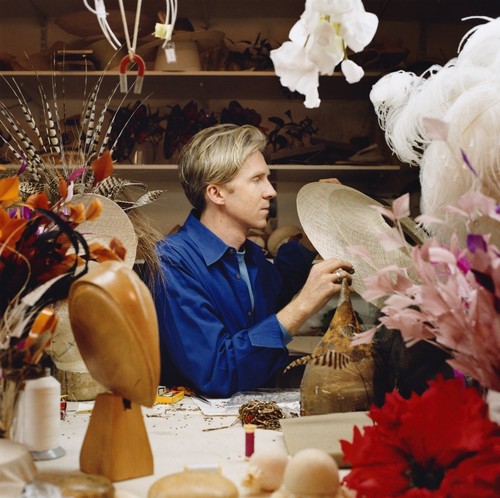 Encouraged by the late fashion icon and former Tatler style editor Isabella Blow to open a small boutique in London’s über-chic neighborhood of Belgravia, Treacy began weaving his spectacular creations for not only the crème de la crème of London’s fashion scene, but also a bevy of internationally renowned magazines, celebrities and fashion houses. Many of his most famous creations have been in collaboration with designers like Alexander McQueen, Valentino and Chanel. Over the course of his career, he has collected numerous testimonies to his creative force, including an honorary Order of the British Empire granted by Prince Charles in 2007 for services rendered to the British fashion Industry and the British Designer of the Year Award on five occasions, and he has even been featured on a series of Irish postage stamps. Yet, it is with a humble hand and a keen eye firmly set on the future that Philip Treacy proves year after year that his vision is not just gobsmackingly glamorous but resolutely relevant, producing wearable pieces of contemporary art for his faithful but ever-so-discerning clientele.

Previews® Inside Out had the privilege of spending a brief moment with Treacy as he and his dexterous team busily prepare for British racing season.

Previews Inside Out Your illustrious career as a hat designer has now spanned for over 25 years, having created for royalty, supermodels, celebrities and heads of state. What would you say have been the highlights of your career? Are there any new and exciting projects in the near future?

Philip Treacy I was summoned to Paris to meet Karl Lagerfeld, chief designer at Chanel. I was 23 and I’d just left school; I didn’t know whether or not to call him Mr. Lagerfeld. I was totally intimidated, but Issie was exactly herself. She just walked into the house of Chanel and said, “We’d like some tea, please.” I went on to design hats for Lagerfeld at Chanel for 10 years. The first hat I designed was the twisted birdcage, photographed by Patrick Demarchelier and worn on the cover of British Vogue by Linda Evangelista. Sarah Jessica Parker at the MET gala was also very memorable.

Now I am focused on horse racing season and … who knows what’s next?

Previews Inside Out Many of your creations are so sculptural — where do you find your inspirations?

Philip Treacy I use contemporary influences, be it sculpture, art or whatever is going on the world today.

Previews Inside Out What was one of the most technically challenging creations that you have done?

Philip Treacy The 17th-century Dalian or “sailing ship” hat. I’d seen old renderings of ships in women’s hair. It was a costume designer’s dream. The idea for this hat was inspired and created from a chapter in Olivier Bernier’s book “Pleasure and Privilege,” called “Rule of Fashion,” about life in France in the 1750s. The chapter described a British Fleet admiral, D’Estaing, losing a famous battle to the French fleet. In celebration, women in Paris wore ships in their hair to go to the opera. I loved the emotion attached to this. It’s made from satin and the bone of the feather. The sails are paradise feathers. The rigging is made from the feather bones, which is what remains when you strip away the feathers.

Previews Inside Out Christian Dior once admitted that he was absolutely obsessed with dresses, and if he couldn’t sketch daily, he was unhappy. Do you find yourself equally obsessed? If you hadn’t become a hat designer, where would you have focused your creative talents?

Philip Treacy I moved to Dublin to study fashion at the National College of Art & Design, where I made hats “as a hobby” to go with outfits I designed on the course. Nobody really had much time for the hat because it was a fashion school, but there did come a point when I was more interested in making the hats than the outfits. When the students had to arrange work experience, I chose to spend six weeks with Stephen Jones, the London hat designer.

After graduating from the National College of Art & Design, I won a place on the MA fashion design course at the Royal College of Art in London. When I was interviewed, I didn’t know whether to play down the hats or play them up, but they were thinking of setting up a hat course so I became their guinea pig. After one day there, I said to my tutor Sheilagh Brown, “What should I do? Should I make hats or clothes?” She said, “Make hats.” It was very practical, not a great revelation.

Previews Inside Out I recently overheard a zealous yet impeccably chic hat aficionado declare that she wore a hat everywhere she wore shoes. Are hats still relevant accessories in the modern women’s wardrobe?

Philip Treacy One of the most exciting aspects of my job is that I have an opportunity to influence how people see hats in the 21st century. And that is a very exciting job, because I have a worldwide audience open to seeing hats in a new way. 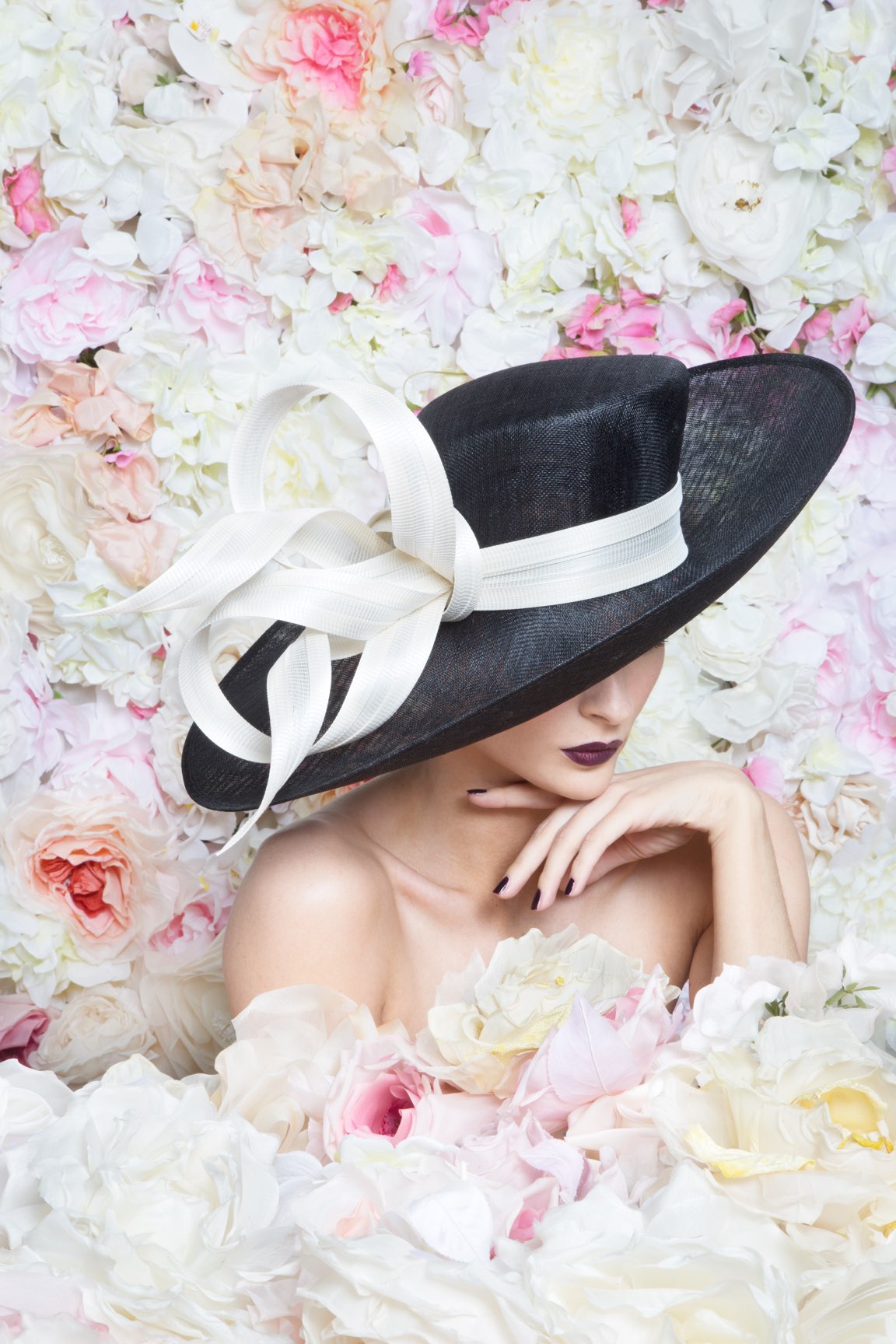 Previews Inside Out It has been estimated that an impressive 36 Philip Treacy creations were worn at the Duke and Duchess of Cambridge’s wedding back in 2011. Would you say that Kate Middleton is still influencing fashion?

Philip Treacy The Duchess of Cambridge is a worldwide icon.

Previews Inside Out Other than the British, who seem quite loyal to dress code protocols, what other cultures are as enthusiastic about wearing hats?

Philip Treacy It’s part of English dress and culture, but we have an international audience who are seduced by glamour, and glamour is and will always be attractive to men and women. So, glamour is a good currency to work in, and there is nothing more glamorous than a hat. 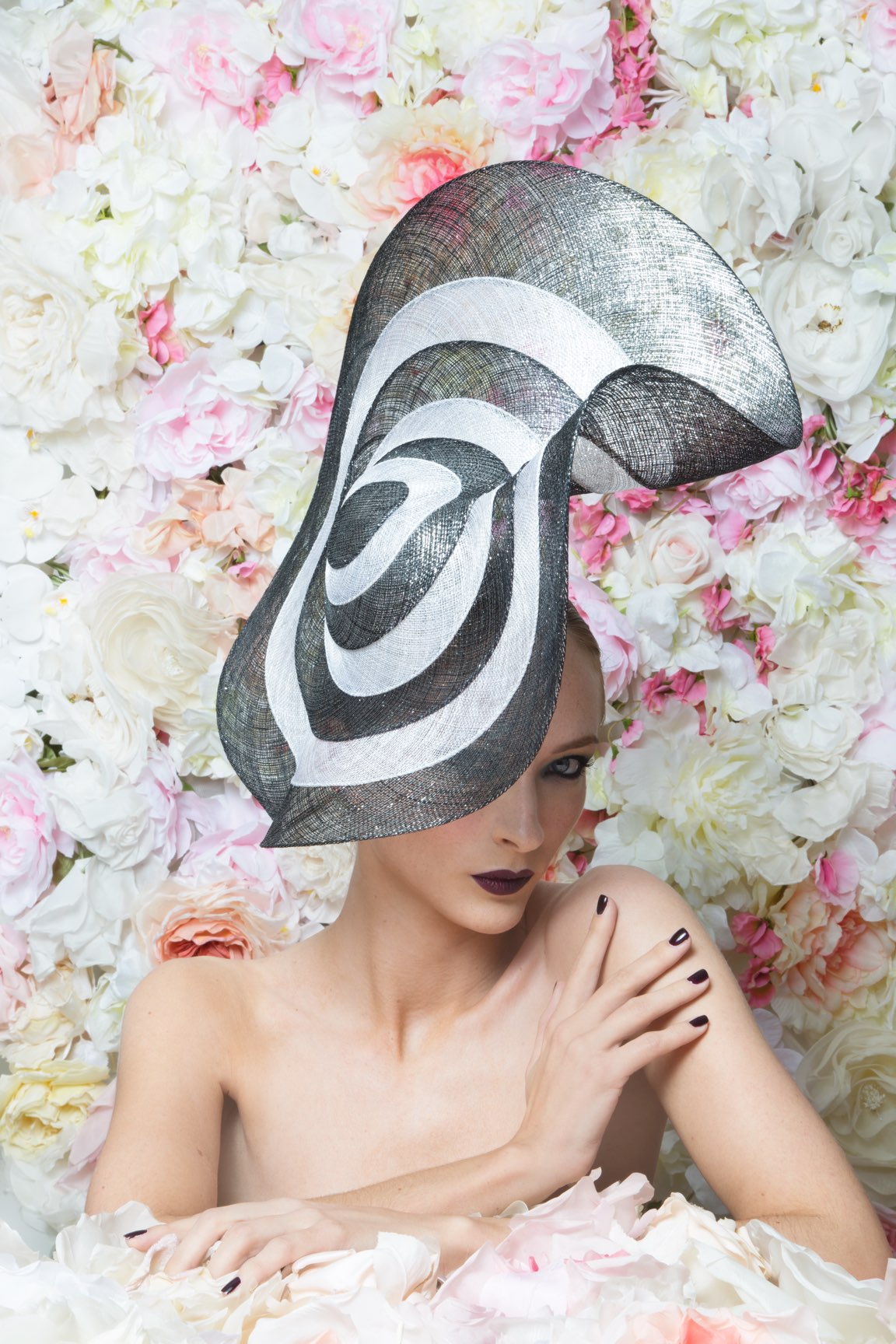 Previews Inside Out With the London season just about to unfurl, what advice would you give to someone attending Ladies’ Day at Royal Ascot? What would be some essential do’s and don’ts?

Philip Treacy I don’t believe in matching a complete outfit. It is far more interesting to pick out some of the lesser colors in the outfit and make the hat to match.

Previews Inside Out You opened your boutique on Elizabeth Street back in 1994. Generally, fashion businesses would gravitate toward areas like Bond Street, but you chose the more residential enclave of Belgravia. What attracted you to the area?

Philip Treacy It is quintessential fantasy London. Isabella Blow moved me into her house on Elizabeth Street when I was at the Royal College of Art. Our shop has become a destination for international hat lovers.

Founded in 1711 by Queen Anne, Royal Ascot is the veritable jewel in the crown of the British Racing Season. This year’s events will run from June 11 to 14. And while many attend for the thrill and excitement of the race, others will turn out on Thursday, June 16, for famous Gold Cup Ladies Day, when millinery masterpieces will take center stage. And if you are sitting in the Royal Enclosure, make sure you are picture-perfect with Royal Ascot’s Style Guide video . 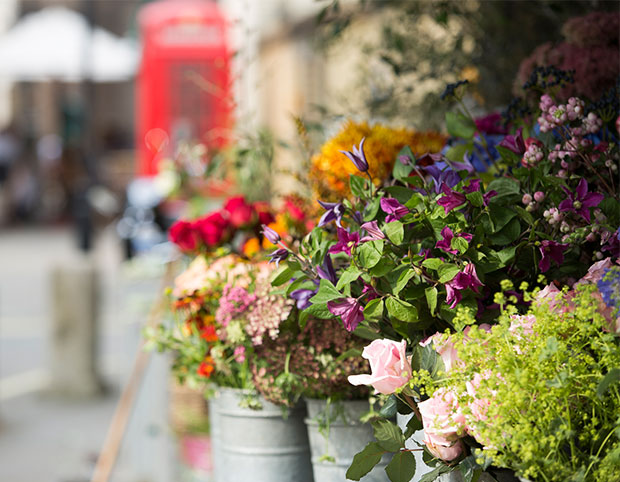 While you are perusing the latest Philip Treacy creations, we also suggest a few quintessential Belgravian delights.

When it comes to flavors, business partners Yotam Ottolenghi and Sami Tamimi have cornered the market with their creative Mediterranean- and Middle Eastern-inspired salads, mains and baked goods. An early morning visit to their quaint shop located on Motcomb Street is a perfect way to fuel up for a day filled with shopping and strolling.

Known as the Picasso of Pastry, French chef Pierre Hermé has been tantalizing the tastebuds of Belgravia residents since 2010. With a unique menu of flavors and style, macaroon and chocolate aficionados alike are sure to find the perfect pick-me-up.

From May 23-28th, the Grosvenor Estate will be celebrating Her Majesty The Queen’s 90th birthday with a walking tour calledBelgravia in Bloom. The event, which is being held in conjunction with the world famous Chelsea Flower Show, is a perfect opportunity to explore one of London’s finest residential enclaves whilst taking in the floral finery of locals shops, specially designed pop-up gardens, and transformed parklets. For more information and to download the guide, visit the Grosvenor Estate Website

Located just a few doors down from Philip Treacy lies the charming world of Mungo & Maud. The Elizabeth Street boutique has been offering a well-edited selection of handcrafted pet toys, clothes and accessories since 2005. Be sure to let Rover sample their organic granola dog biscuits, which are bound to surprise and delight even the most demanding pooch.

Every good hat deserves a new pair of shoes, so once you’ve bagged your latest bonnet, head over to Christian Louboutin for a little red-sole therapy. Their Motcomb Street boutique provides an intimate and brand-immersing experience, far from department store hustle and bustle.

If you still haven’t found that perfect London pied-à-terre but need a well-located home away from home, rest assured that Belgraves Hotel on Chesham Place will welcome you with open, albeit stylish, arms. Designed by Tara Bernerd in subtle but modern tones and textures, the 85-room hotel serves up impeccable service coupled with an equally impressive menu of libations and culinary delights.