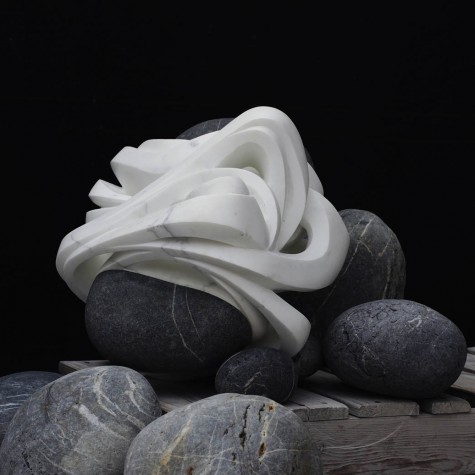 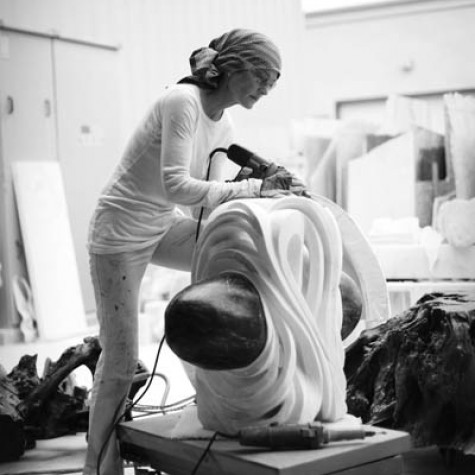 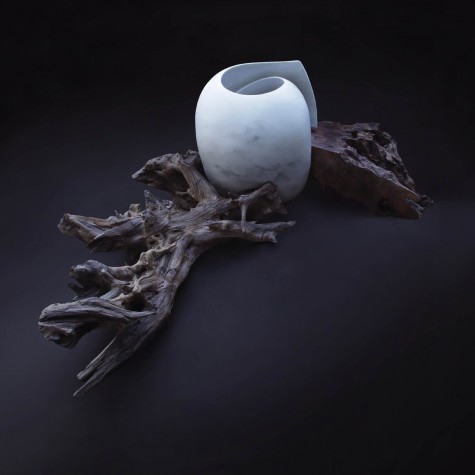 Forget black and white. Forget yes and no. Elizabeth Turk’s world consists of grays and maybes. Her fascination with paradox and her ability to exist in the “I-don’t-know” has inspired much of her work. Rendered in marble — one of the heaviest, most unforgiving (and naturally exquisite) materials to work with on earth, her sculptures often boggle the mind with their featherweight appearance. “How did a 500-pound hunk of stone get reduced to an essential matrix of 10 pounds?” people often wonder in the presence of a Turk piece. 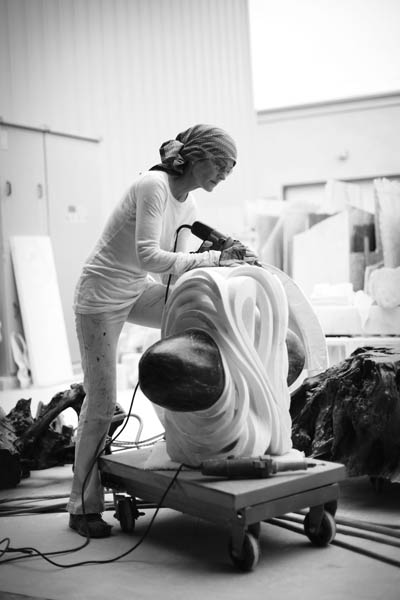 On the heels of her fourth solo show at New York’s Hirschl & Adler Modern from September 17 to October 24, Previews® Inside Out asked about her latest exhibition (called “Tensions”) and the ways in which she pushes the boundaries of opposing forces in her art.

Previews Inside Out Tell us a little about “Tensions.”

Elizabeth Turk I love this body of sculpture. It has been slowly developing for years, maybe five or six. And now there is an opportunity with Hirschl & Adler to bring much of it together. It’s exciting. Solo exhibitions reveal new aspects of the themes I can’t abandon and lead me to understand my own work on a deeper level. I’m always grateful for this process.

Previews Inside Out Can you explain the meaning behind the title?

Elizabeth Turk The title “Tensions” is an active word characterizing a state of being, rather than describing an object. This differs from the nouns of previous titles [“Collars,” “Ribbons & Pinwheels” and “Cages”] because I’m intentionally expanding the focus from a single artwork to a dialog between elements. This conversation is about the tension inherent in human temperament and nature itself. The highly carved marble works act as metaphors for the intensity of human will, and the chosen natural elements represent beautiful states of being.

Previews Inside Out For you, what is most significant about this show?

Elizabeth Turk It is not about an artist’s voice alone. In each piece, natural change is on an equal base with the arduous human efforts of carving and shaping. This work is not overly concerned with a pronouncement of deep meaning but, instead, with offering a platform to encourage reflection. 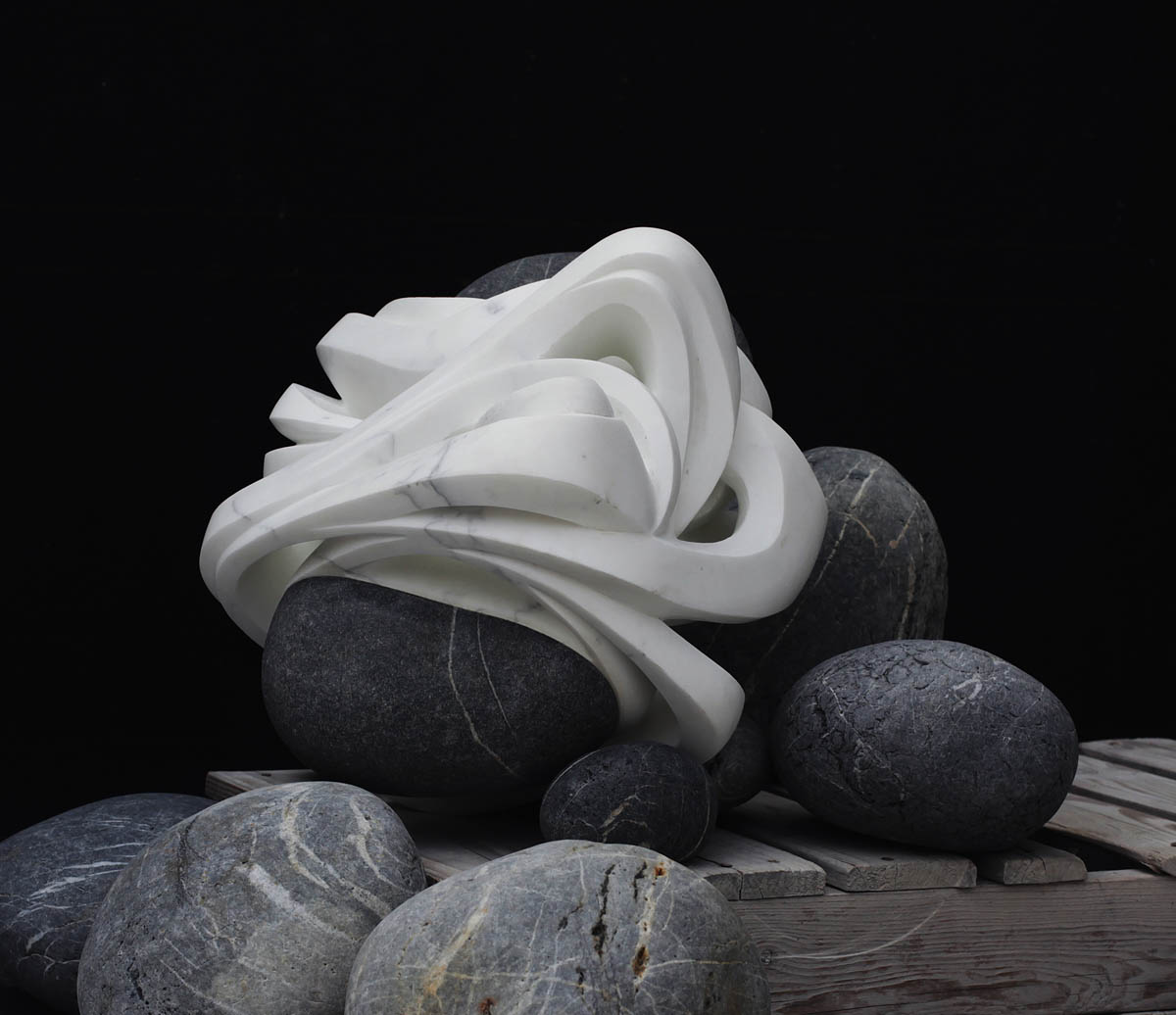 Previews Inside Out Let’s talk about your fascination with paradox. Where did that originate?

Elizabeth Turk All my life, I’ve only seen gray. “Black & White” and “Yes & No” are so difficult for me. I see “Maybe,” “But,” “On the other hand.” I hate arguments. Perhaps this is why, in the intensity of conflict, we are often blinded to the seeds of truth within each other’s perspective; yet, opposing sides are linked. Studying paradox is my pathway of acknowledging this, and then looking for a vantage where these equally significant realities can be a better whole. Boundaries are never static in nature or between humans.

Previews Inside Out You’re somewhat of a paradox yourself, dividing your time between Orange County — this sunny, suburban West Coast oasis — and New York City, this gritty, brooding yet thriving art mecca!

Elizabeth Turk Yes. This is the perfect combination for me. 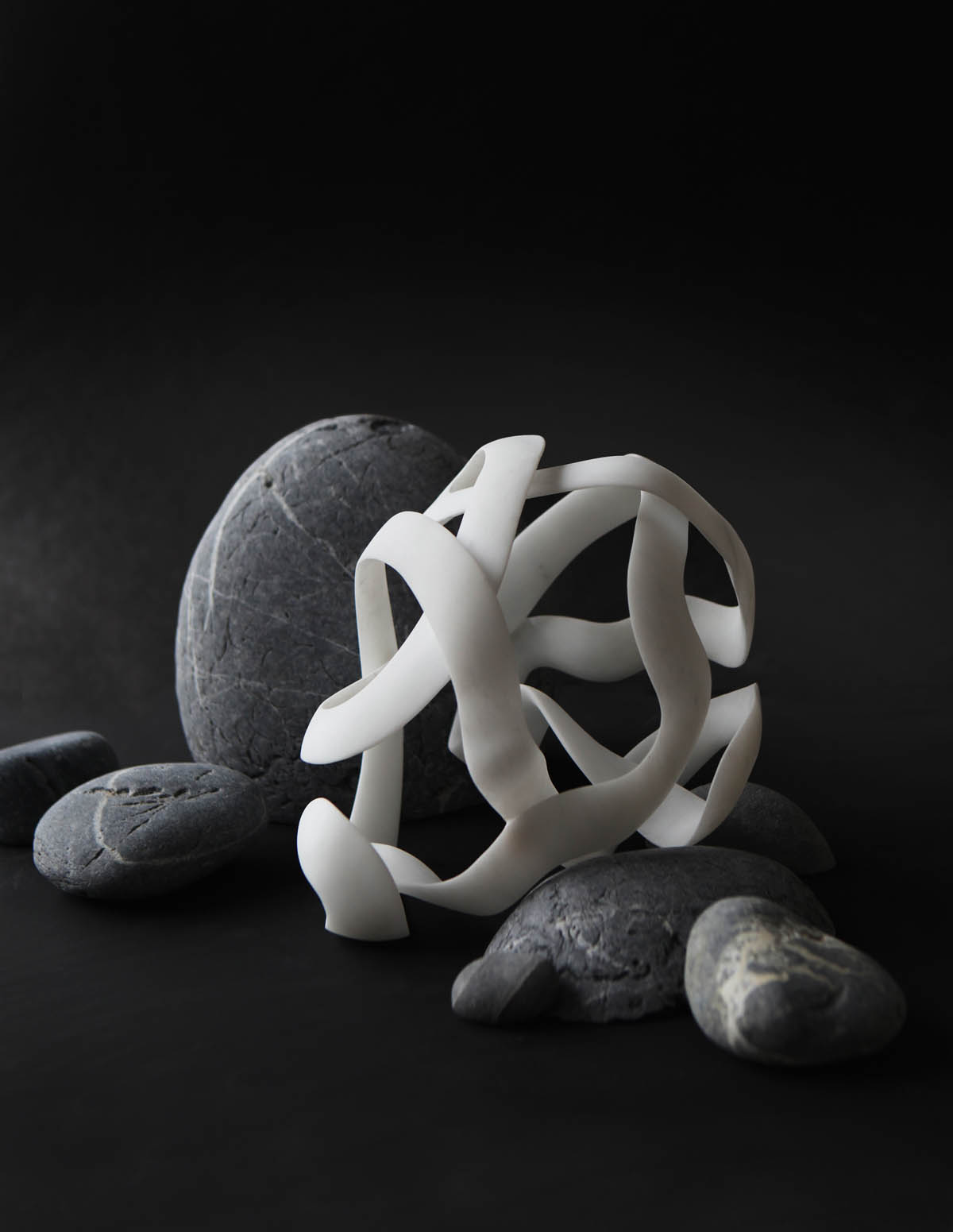 Previews Inside Out Would you say these two worlds (the suburban and the urban) are at play in your work…perhaps a manifestation of the traditional vs. contemporary juxtaposition you talked about in your bio? And if so, how?

Elizabeth Turk When I am in California, I don’t see suburbia. I feel nature. The West is in my blood, but my mind thinks too much. That is to say, I’m at home in the overwhelming size of a natural setting, where my sense of self is miniscule. It seems appropriate. The ocean, the mountains, the desert, all can recalibrate my soul; without these reminders, my mind races. I find views with a horizon line calming. Yet, remove the gritty (as you put it) human exchange, the competition and general messiness of human drama, and life would be incomplete.

Previews Inside Out From where do you draw inspiration?

Elizabeth Turk I don’t know. It simply exists. In fact, sometimes I wish I could turn it off. 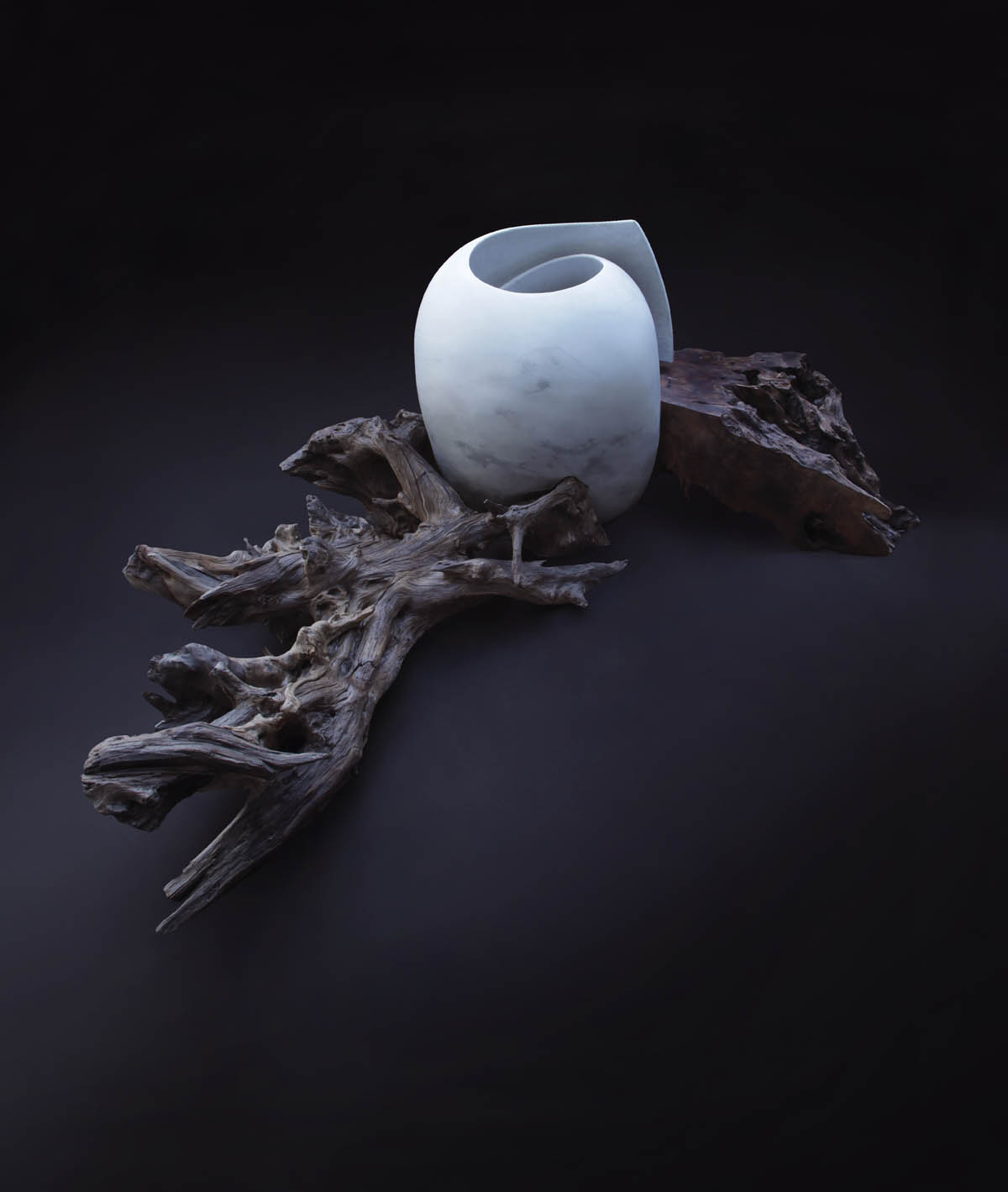 Previews Inside Out You primarily work with marble. Why marble, and not another material?

Elizabeth Turk The challenge, perhaps. It’s hard! Within stone — especially limestone and marble — an artist deals with both human and geologic history. I like the perspective this offers and then is forced upon me.

Previews Inside Out I have to say that there is something insanely beautiful in the way you’ve reduced this 500-pound material to 10 spiraling pounds. It’s just so simple and organic…yet, I’m sure your technique is not.

Elizabeth Turk Thank you. In the 1990s, I looked at what the stone-cutting industry was introducing to its process. There were many computerized milling machines grinding out shapes with increased delicacy. I realized that the “Xerox machine” had been invented for stone sculpture. Industry had introduced a contemporary technique to this traditional medium, but I didn’t want to employ technology as purely a replicating device. I decided to explore directions I saw in these machines: reducing the stress to the stone by using delicate diamond bits, expanding the potential depth to undercuts, and experimenting with the extreme detail in scanning, eventually inverting those scans. My goal was never to erase the traditional but to blend possibilities. I do love the meditative aspects of repetition and working with my hands.

Previews Inside Out Do you ever work on a private commission basis? If so, what was one of the most memorable commissions you’ve had?

Elizabeth Turk Yes, I do on a limited basis. My favorite commission was a work called “First Breath.” It was the most intimate work I have ever created. It was about a universal moment, a very first gasp of air, yet one could carry the artwork in a pocket. Now, I’m hoping for opportunities where everyone could leap into that pocket! This means designing more environments, larger-scale work committed to the same level of personal intimacy as “First Breath.” This is a current dream.

Previews Inside Out If we wanted to buy one of your pieces, what should we do?

Elizabeth Turk I have been represented by Hirschl & Adler Modern in New York for over 15 years, so it’s best to be in touch with them directly.

Previews Inside Out What’s the cost?

Elizabeth Turk My sculptures range in price from about $35,000 to $500,000, depending on their size and complexity. Each body of work varies a bit.

Previews Inside Out What’s next on the horizon for you?

Elizabeth Turk This exhibition has been a privilege, as it has afforded the opportunity to bring many elements in addition to marble into the experience. The artwork ranges from handheld pieces to environmental work, and introduces possibilities with video and streaming. This is exhilarating, as I hope to continue to extend my palette of materials to augment the work conceptually. In each show, I leave clues to the themes of what is next. In this one, there are several!