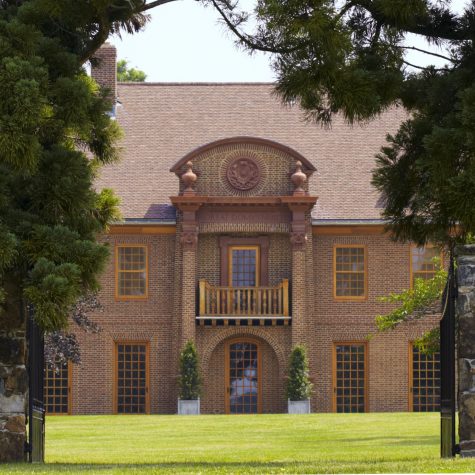 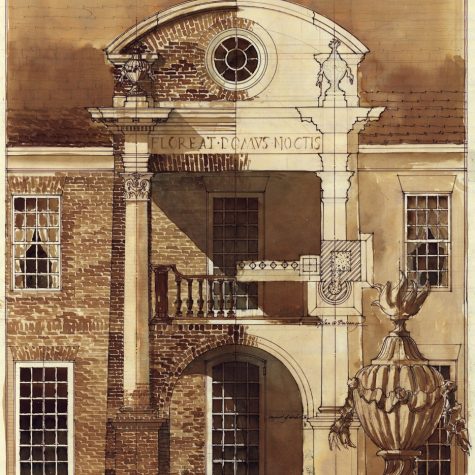 In 1418, a goldsmith named Filippo Brunelleschi designed one of the greatest architectural feats in Italy: the dome of Santa Maria del Fiore cathedral in Florence. Il Duomo, as it is called, consists of two concentric shells, an inner one visible from within the cathedral nested inside a wider, taller external dome. His detailed sketches and diagrams reveal just how groundbreaking it was for the time. Five centuries later, Edwardian architect Sir Edwin Lutyens revolutionized the notion of the English country house by fusing function with the arts and crafts movement.

The evidence of their genius lives on in their buildings to this day — and yet the artistry of architecture, as these two men knew it, has largely faded. Hand-drawings and sketches have been replaced by digital renderings. Ateliers, once considered the birthplace of art and design, are few and far between. Many of the great arts and crafts traditions are being lost to mass-manufactured fabrications. Technological advancement, while positive and necessary, has made the intangibles in a physical environment — the emotion of a space — become pixelated. 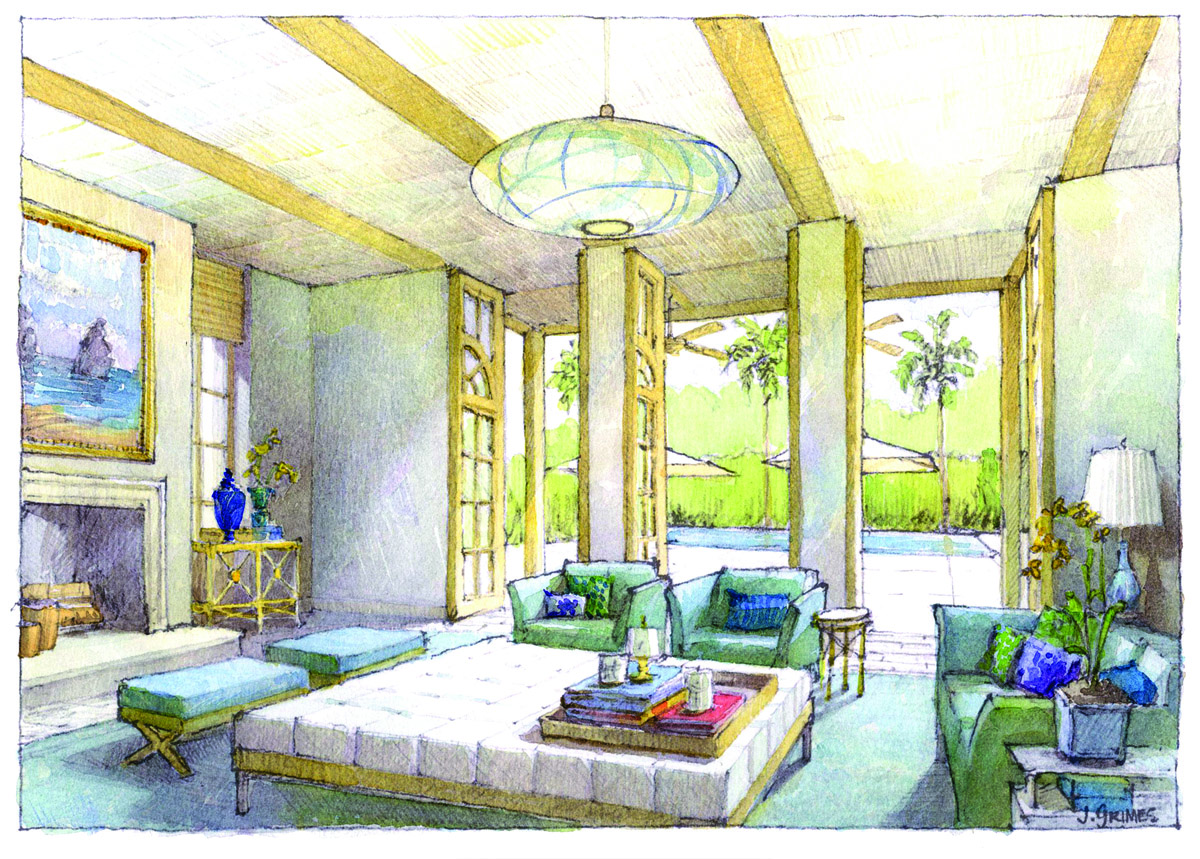 “Once upon a time, an architect needed to paint and draw well,” explains Richard Cameron, co-founder of Atelier & Co. in Williamsburg, Brooklyn. “It was part of their architectural training.”

The idea of creating an art studio that practices architectural design intrigued both Cameron and his partner, Jason Grimes. Thus, the pair — who met each other in 2004 while Grimes was still studying architecture at the University of Miami (later, they worked together at Ferguson & Shamamian) — decided to establish Atelier & Co. in 2009 to “bridge the gap between past and present” and “carry on the art and architecture tradition,” says Cameron.

Each new design at Atelier & Co. — whether house, hotel or object — begins with a painting by Grimes. Often, by the end of a project, clients will have a custom-made, leather-bound book of paintings to remind them of the genesis of their creation. Atelier’s artistic approach resonates almost immediately with its affluent clients. After all, many of them already possess a natural appreciation for the beauty of handmade, bespoke things. They also appreciate the creative process, say Grimes and Cameron.

“It’s very human,” says Grimes. “Of course, we all enjoy the products of modern technology and industry, but they’re mass produced. They’re more disposable. You’re probably not going to be looking at your iPhone as timeless in 20 years. But something that has been made by hand, whether it’s a purse or a house, you have a connection to it. It’s special.” 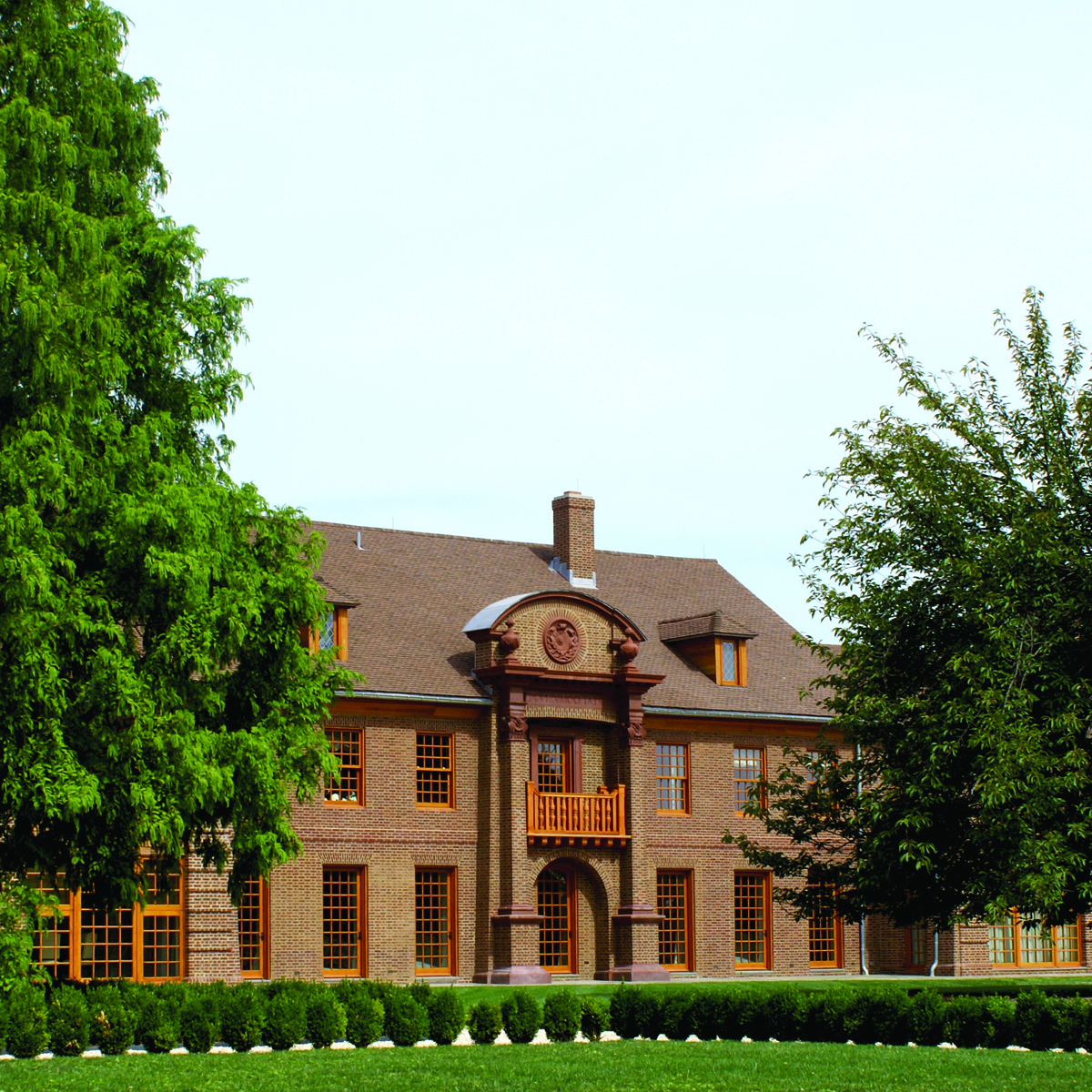 None of this is to say that Atelier & Co. doesn’t use digital technology for its designs — it does. But Cameron and Grimes see contemporary design programs such as CAD as complementary to their artistry.

“We’re awash in all sorts of digital technology today, and with virtual reality technology, it’s becoming even more so,” says Cameron. “We often bring books to client meetings. There is a tangible quality to looking through a physical book or looking at handmade drawings. We have a different relationship to the handmade qualities of a painting than we do to a digital rendering.”

Too, says Grimes, a digital rendering will often look so real that clients will perceive a home as already built.

“I’ve found that people are frustrated by that,” he notes. “If it’s already complete, what’s the fun of that? There is no imagination. A painting helps them bring their vision to life.”

As the firm’s website promises, artistry is often felt on a soul level during the design process. “Here, an architect is an artist viscerally rendering imagination onto paper, and converting line into three-dimensional form. Hand-drawing and painting are the rigorous and intimate tools that communicate the yet intangible space, and allow consideration for each meticulous detail, committing them to memory.” 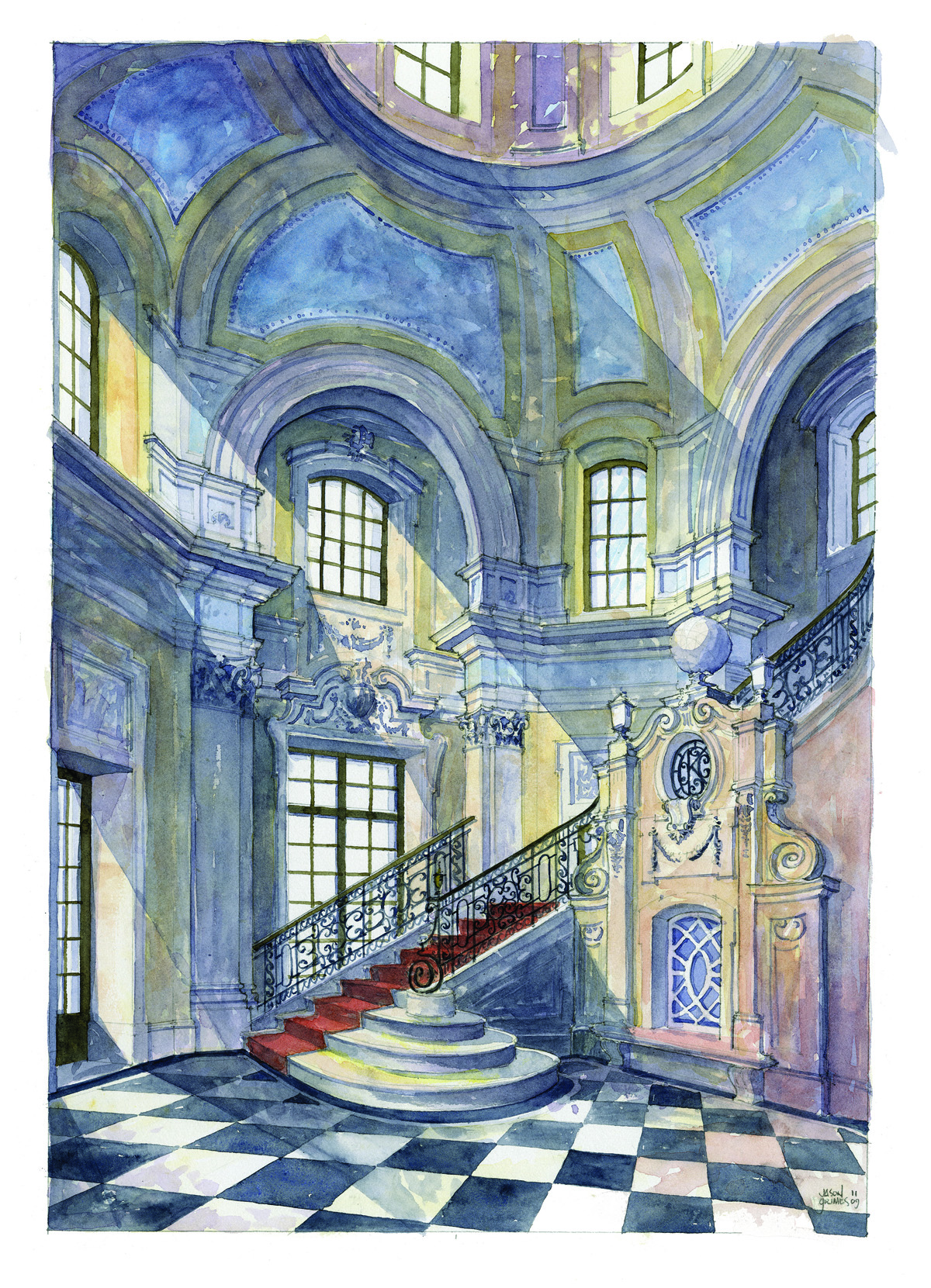 When Grimes and Cameron talk about their work, they often use phrases like “the translation of the psyche into scenery” and “physical environments that reflect our inner world.” These concepts can be hard to define, but they are united by a single quality: beauty. Their portfolio reveals both imagination and historical precedent, comfort and culture, the personal and emotional; beauty is subjective — for the owner to enjoy. A Florentine palazzo in New York reveals an Italophile owner’s lifelong passion. A Westchester colonial revival home unveils the owner’s growing collection of 18th and 19th century American decorative arts, and fine Asian bronzes. In Long Island, decorative clutter has been edited away to uncover the classical lines and simplicity of a country house.

“There is always a traditional reference point for us,” says Grimes. “It makes beauty a little easier to perceive, because you’re working with a point of view that has been time tested.” 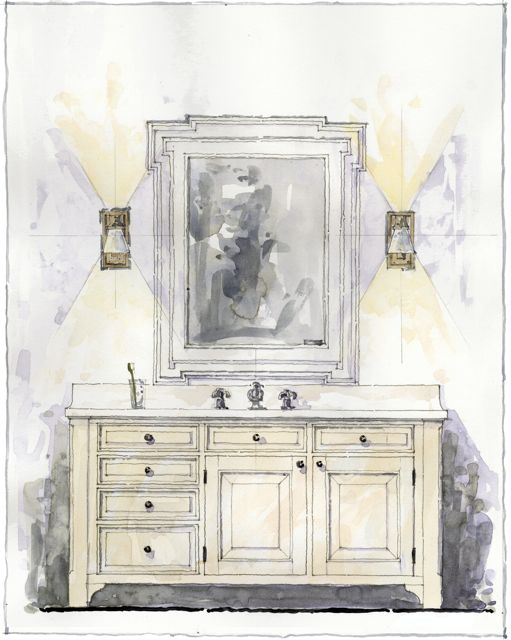 Adds Cameron: “We’re always trying to make things that people respond to. For us, it always goes back to the way things are made, even in terms of the time it takes to make them.”

Certainly, a hand-painted drawing takes longer to create than a digital rendering. Even handcrafted details in an Atelier-designed residence, like the intricate Indian-inspired plaster work found on the ceiling of the 130-acre Ravenwood estate in rural Pennsylvania, require more patience on the part of the client. 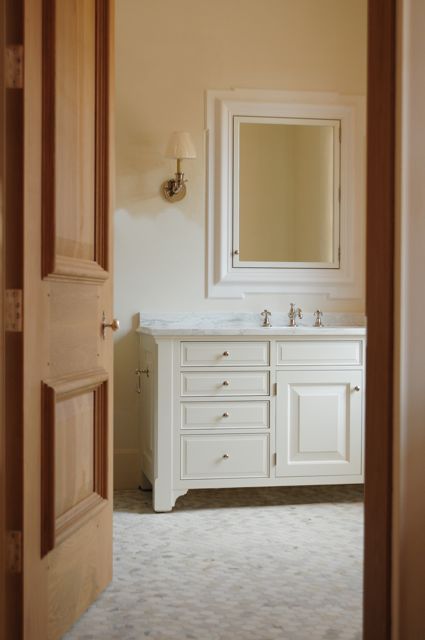 Staying true to the atelier model, the boutique firm often relies on close collaborations among architects, craftsmen and artisans — from decorative plasterers to ornamental metalworkers — to bring their projects to realization. They see this collaborative paradigm as granting them the agility to serve an array of clients and design projects, spanning from residential and commercial buildings and interiors to art, objects and preservation initiatives, including a proposal to restore New York City’s Penn Station. They compare their role in musical terms; sometimes they act as a “conductor” within the orchestra and sometimes they act as “first-chair artisan.” The goal, they say, is to always “produce a single masterpiece, combining comfort with beauty, reaching the highest level of quality.” 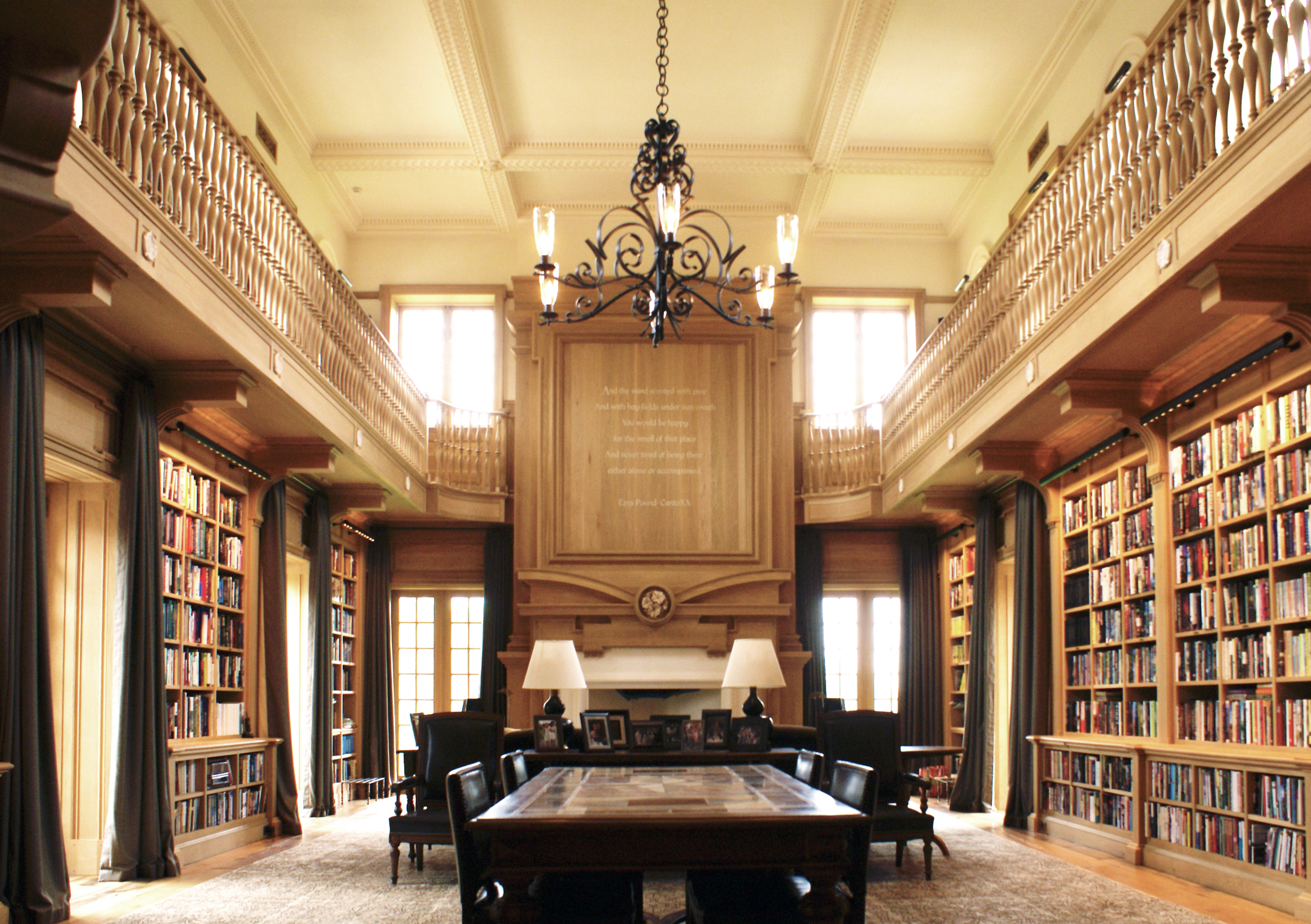 Today, their masterpieces pepper the United States, from Coral Gables to Malibu and Manhattan. With the recent launch of their West Coast outpost in Denver, both Cameron and Grimes hope to expand their architecture-as-fine-art practice. Their goal is to continue creating the most beautiful architecture possible. Like the enduring artistry of Brunelleschi and Lutyens, their work will be tested against time.

“The more beautiful you make a project, the more timeless it will be,” theorizes Cameron. “The only meter to that is a long time from now, when none of us are around and people still think it’s beautiful.”