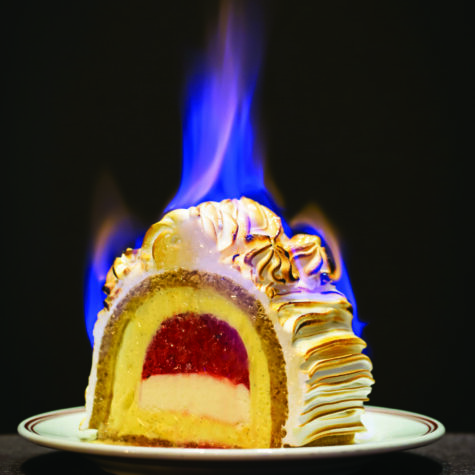 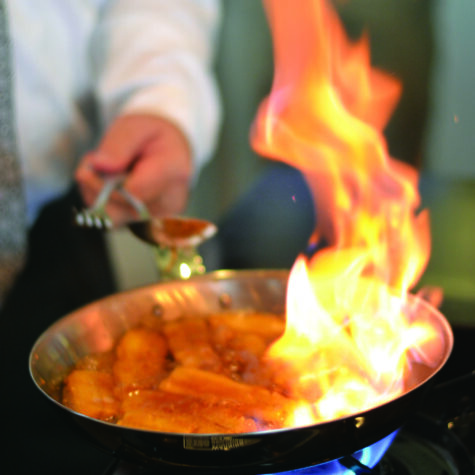 Dining out has always been partially about theater, and restaurants have constantly distinguished themselves by the drama created on the plate or in the dining room. Nothing speaks to a sense of theatrics more than flaming dishes presented tableside. Flambéed foods may be considered retro, but our passion for this kind of stagecraft never fades.

Fire is actually a ubiquitous element of the dining experience, from the elegance of candlelight to the roaring wood-burning ovens and hearths that have become not only popular among chefs, but with interior designers as well. An aspect of fire that has never entirely disappeared — despite fire marshals and insurance executives encouraging its demise — is the tradition of preparing flaming dishes tableside. 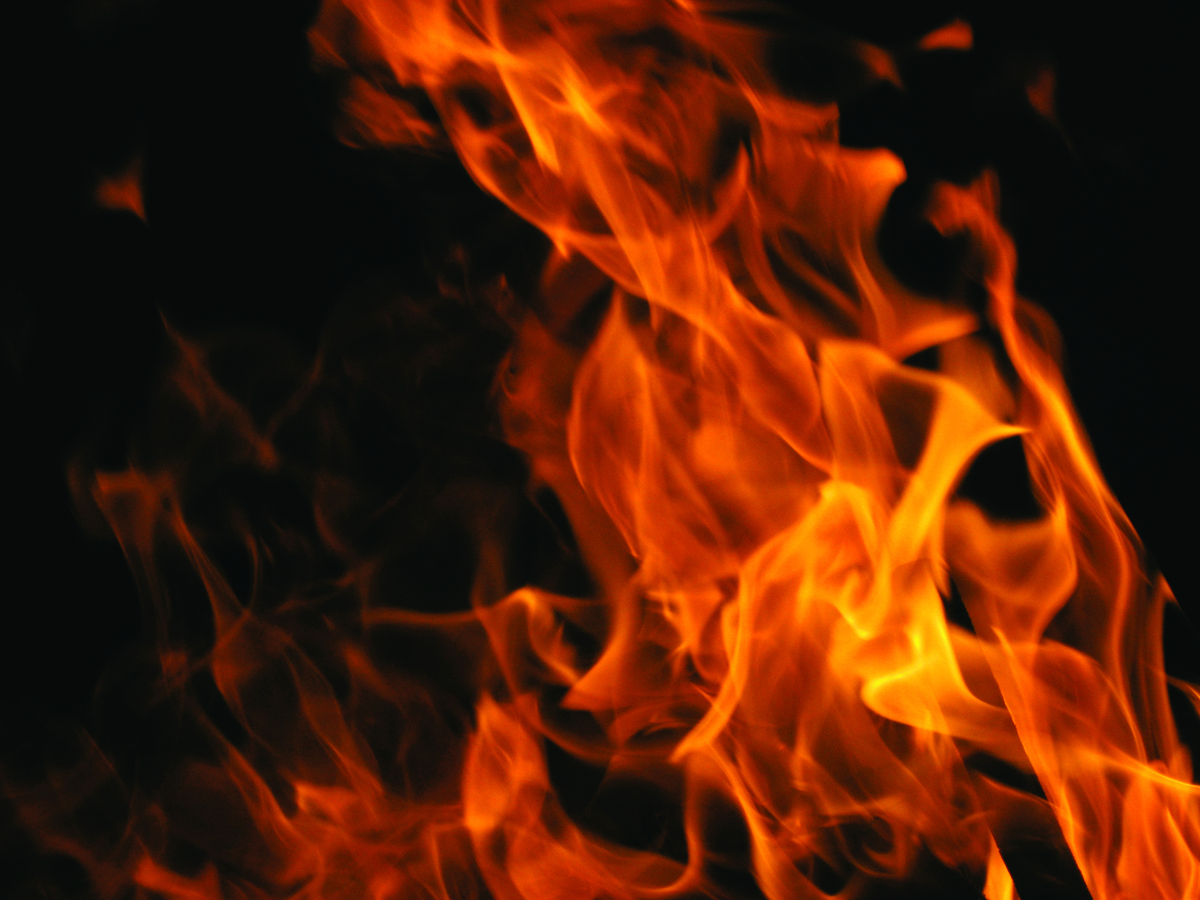 While the association between fire and food date back to the earliest human experience on our planet, the modern era of flambéing reportedly originated as recently as 1895, when the Prince of Wales — he would later become England’s King Edward VII — was dining at Café de Paris in Monte Carlo. A 14-year-old waiter, no doubt nervous about his assignment, accidentally set fire to some cordials while preparing crêpes. The result was the invention of crêpes Suzette, named after one of the prince’s guests and still a popular excuse to play with fire in restaurants around the world.

In the mid-20th century, flambéing tableside was di rigueur at fine dining establishments, but by the end of the century it was largely abandoned as highly trained career servers disappeared and cost- or safety-conscious proprietors simply opted out. With a new generation of owners and diners viewing it as stuffy or antiquated, the chafing dish faded from the scene, but today there is renewed interest in this retro glamour.

No restaurant exuded the elegance of Manhattan more than The Four Seasons, the iconic restaurant atop architect Mies van der Rohe’s Mid-Century Modern masterpiece, the Seagram Building. The establishment’s nearly 60-year reign as one of the Big Apple’s top tables — it was a favorite of Ralph Lauren and Jackie Onassis — ended in 2016, but New York’s Major Food Group snapped up the hallowed space to create The Grill and some prized event venues. Naturally, tableside service, flames and all, are part of the new concept that pays homage to a more glamorous era.

“The Grill is emblematic of the mid-century American fine dining institution, so naturally, the menus and service are very much playing to the idea of nostalgia,” explains Major Food Group managing partner Mario Carbone. Retro dishes at The Grill include lobster à la Newberg, prime rib delivered in a glistening trolley and desserts flambéed at the table. The tableside service at The Grill, which echoes the style at The Four Seasons in its prime, is comforting for older guests and a novelty for younger diners.

A more casual, unpretentious flambéing tradition can be found at authentic Greek restaurants around the nation. Saganaki, a traditional meze (appetizer) is a skillet of kefalotyri or kasseri cheese that typically arrives at the table in flames after being doused in ouzo. In addition to creating a lively spectacle of Greek hospitality, the controlled inferno imparts a delicious golden-brown crust on the cheese. Opa!

Melvyn’s, the restaurant at Palm Springs’ intimate Ingleside Inn, is so endearingly retro you half expect a young Frank Sinatra to saunter in for a martini and, in fact, this place oozes genuine Rat Pack history. Still on the menu from those days is steak Diane, whose brandy-infused sauce is expertly flambéed aside crisp white linen-clad tables. Although there is no consensus on the exact origin of steak Diane, most agree it was an American invention of the 1950s, probably first served in New York.

More than any other course, dessert seems to offer the greatest opportunity for flambéed food, with a wide variety of classic specialties — baked Alaska, cherries jubilee, crêpes Suzette, to name a few — that are traditionally set aflame. Brennan’s restaurant, a New Orleans institution since 1946, is the reputed birthplace of Bananas Foster, which has become the quintessential Big Easy dessert, rich and decadent, sweet and fiery like its hometown.

In 1951 restaurateur Owen Brennan challenged his chef to create an impressive bananabased dessert, and the original formula was named after Richard Foster, a friend of the Brennan family and chairman of the New Orleans Crime Commission. Today, it is among the most frequently ordered dishes at Brennan’s and is as closely associated with the city of New Orleans as Mardi Gras and jazz. 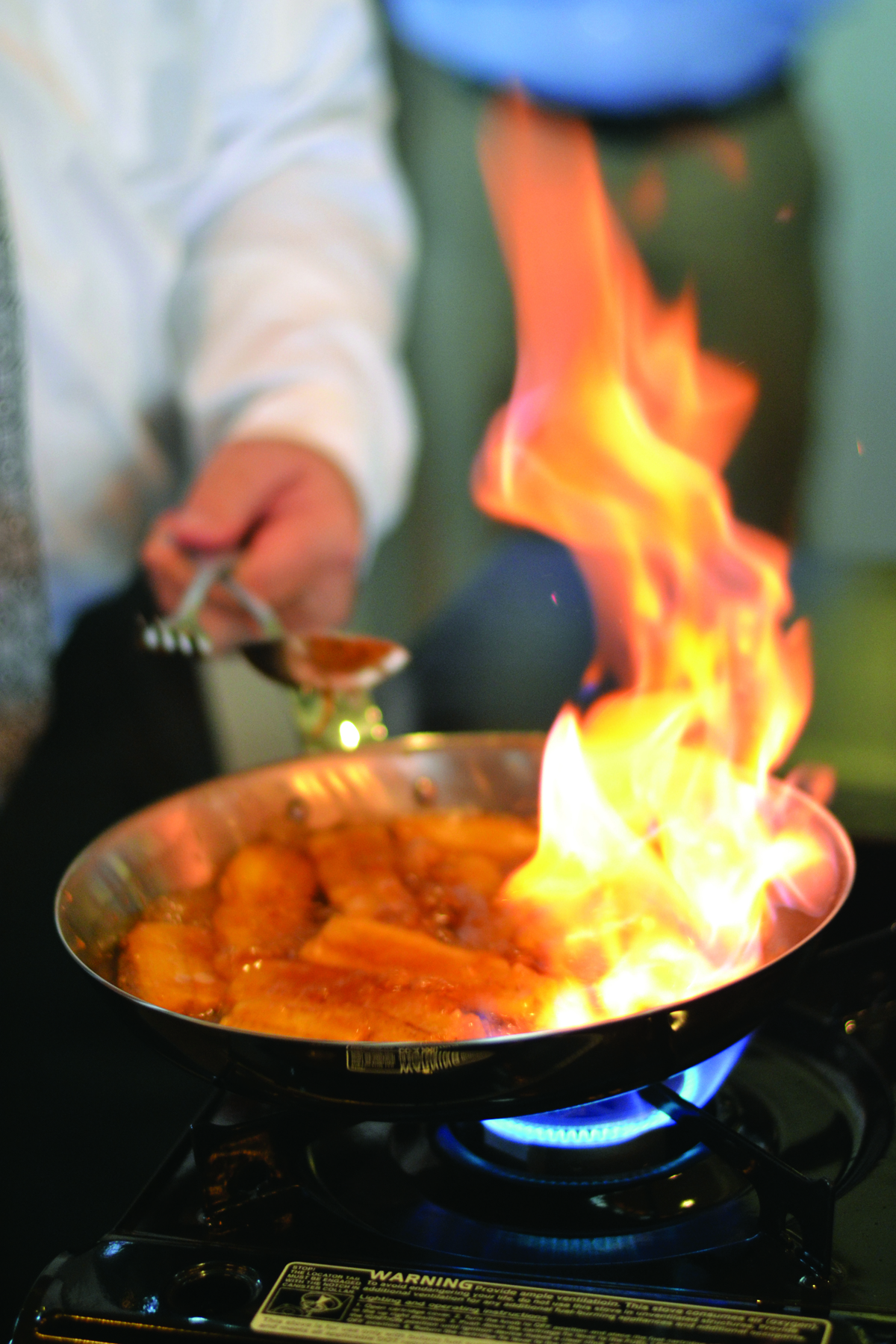 “My family really created a unique meal, period, and this dish was a critical part of that,” says current co-proprietor Ralph Brennan, who is proud to continue the tradition of culminating feasts at his New Orleans institution with the flamboyant dish of Bananas Foster. “Growing up, I was always enamored by tableside cooking,” recounts Brennan, who notes, “You see too little of that today.” 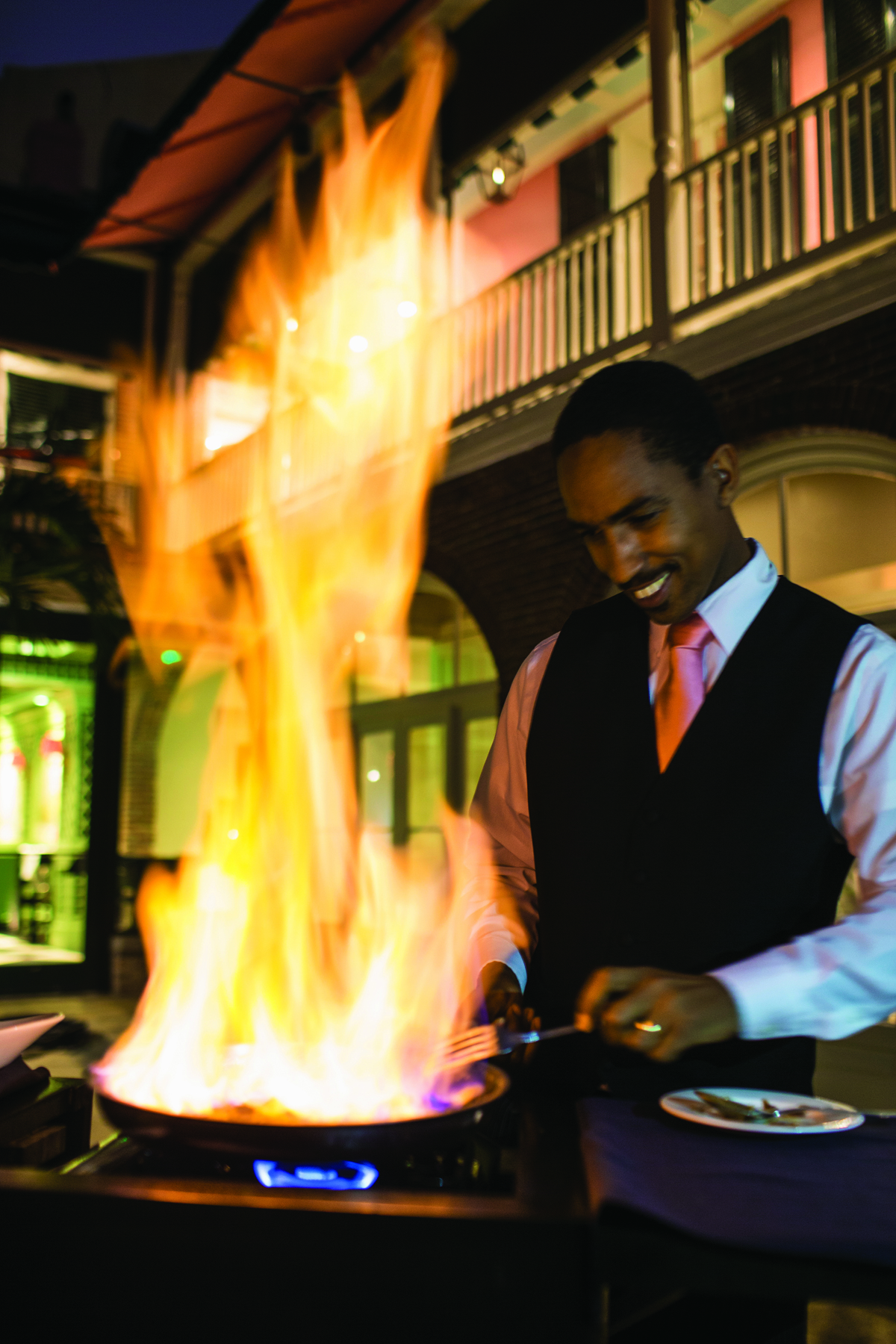 Baked Alaska was one of those recipes hiding in dusty old cookbooks, but, about a decade ago, it mysteriously began reappearing on menus, even in hip, trend-conscious restaurants. Its origin is in dispute, but the dessert is essentially a meringueencrusted ice cream cake set aflame for effect, and the theatrics never get old. One of the contemporary purveyors of the dish is renowned chef Daniel Boulud’s DBGB Kitchen & Bar in Washington, D.C., a lively brasserie that is far more casual than his flagship Daniel in Manhattan.

DBGB’s baked Alaska for two — here raspberry sorbet and pistachio and vanilla ice creams are wrapped in almond dacquoise, covered in meringue and flamed with vanilla-infused vodka — is a signature finale after consuming bistro favorites like coq au vin and steak frites. Elizabeth Sanie, DBGB’s pastry chef, states, “Guests today are more excited to experience food and diners love to see a retro dessert reimagined.” Noting her craft is now subject to Instagram posts the pastry chef explains, “Diners tend to choose a meal for the picture-perfect moment while still wanting something that tastes familiar, and the baked Alaska checks all those boxes.” 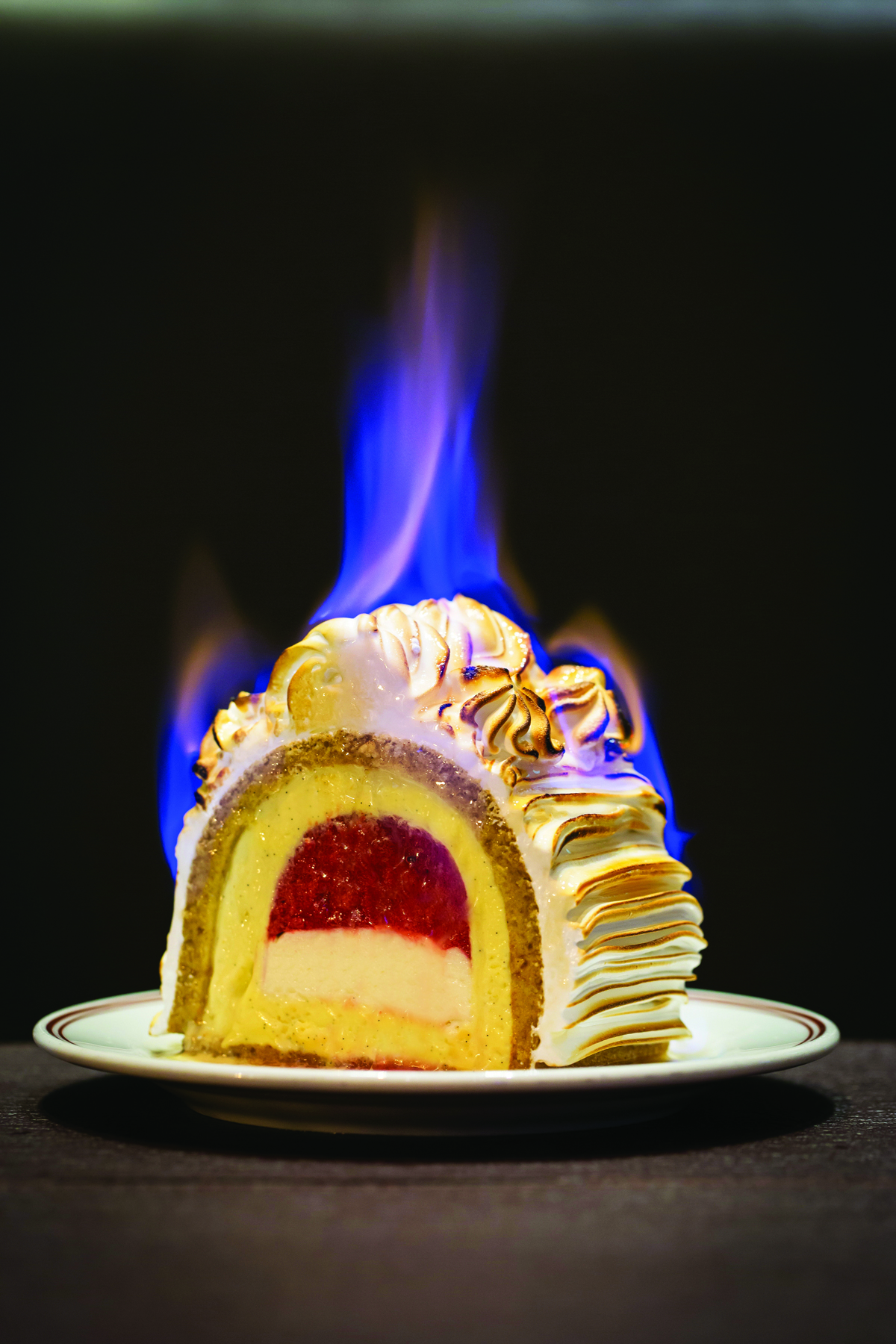 Located in trendy neighborhoods of major American cities is STK Steakhouse, which has brought welcome sex appeal to the buttoned-down chophouse concept. At many locations, the most alluring dessert option at STK is the “The Cloud,” favored for ladies’ birthday parties. White chocolate crémeux, angel food cake and strawberry ice cream are covered in a billowing cloud of pink cotton candy, ceremoniously set aflame with a blowtorch at the table. “I wanted to create a ‘wow’ experience for our guests,” reports executive pastry chef Brigette Contreras, who explains, “We’re known for ‘vibe dining’ and what better way to show that than with a flaming tableside dessert.” 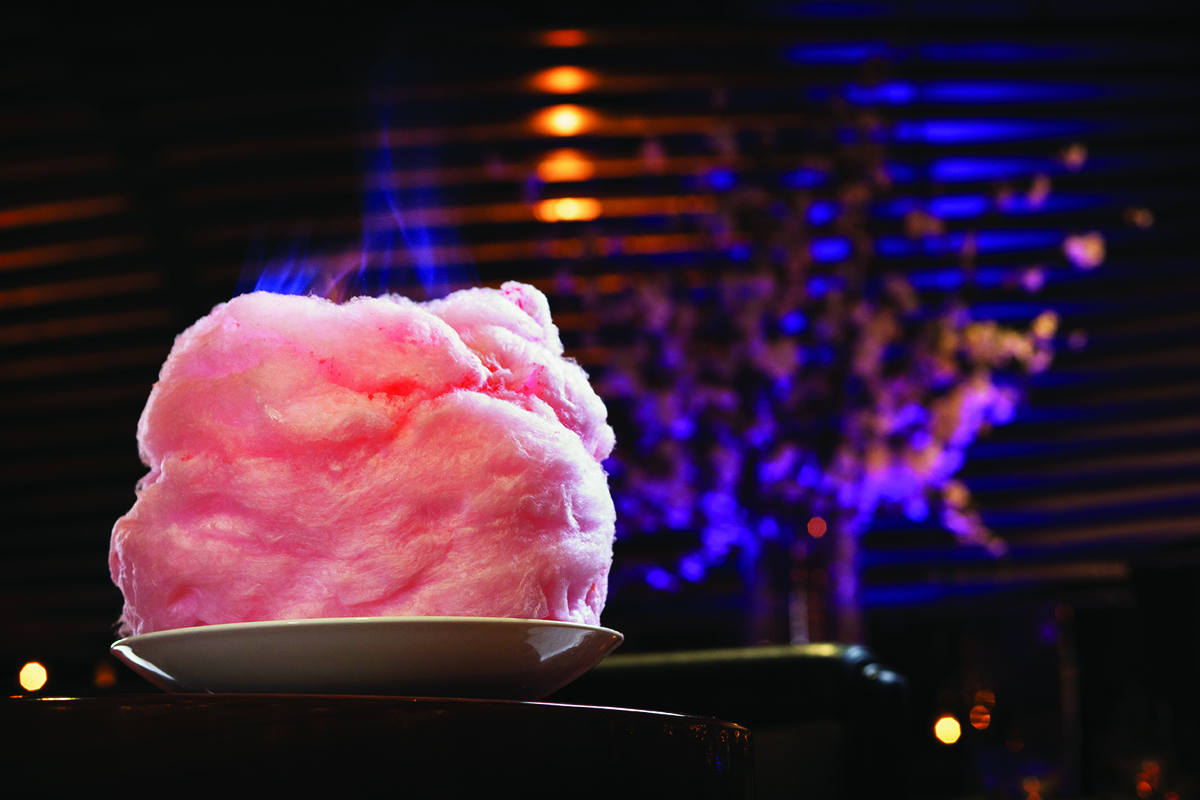 The Cloud at STK

At Rose. Rabbit. Lie., the swanky supper club at The Cosmopolitan in Las Vegas, a version of Bananas Foster is flambéed tableside and the New Orleans recipe is tweaked to provide a greater cuisine Steve Gotham. Inspired by the original, the version at Rose. Rabbit. Lie. multiplies the banana factor by including banana bread toasted in brown butter and banana “leather” (think banana fruit roll-up) for additional flavor and texture. “Preparing the Bananas Foster tableside and flambéing right in front of the guests is a way for us to bring them more into the experience, as they become a part of the show,” says Gotham. 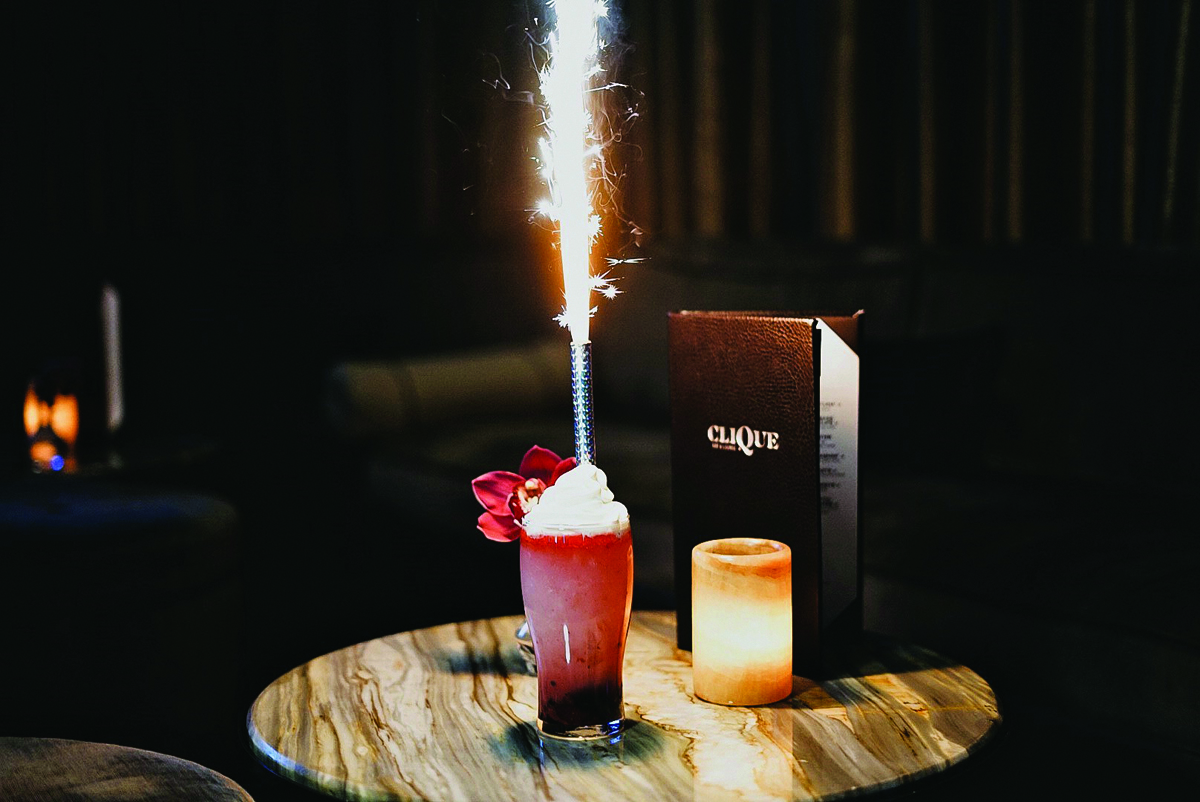 The theatrical effect of flaming at the table absolutely carries over to the bar as well, where there is a long tradition of igniting alcoholic beverages. At The Cosmopolitan’s CliQue Bar & Lounge, which specializes in tableside mixology, a flame-throwing sparkler extends from the rum-and-berry “Up All Night” cocktail, punctuating the dark, sexy scene. CliQue Hospitality’s mixologist Eric Hobbie — his official title is “Lead Intoxicologist” — quips, “Nothing says ‘celebration’ like a firecracker in your cocktail.” He further explains, “We eat and drink with our eyes first and I always say the most important ingredient in any dish or cocktail is ‘experience.’”

The Blind Rabbit, a speakeasy-themed gastropub in Anaheim, California, offers dishes like duck confit mac-and-cheese, bourbon-braised pork belly and bison meatloaf. Dispensed from its well-stocked bar is a cocktail called “Wait for It” in which bartenders mix Zaya rum with pineapple and lime juices, simple syrup and vanilla. They then pour it into a glass that has been entirely engulfed in flames (including the tray or metallic bartop on which it is served) by igniting some high-proof rum. It is a dramatic presentation and among the restaurant’s merch is a “Wait for It” lapel pin to commemorate the experience.

Tiki bars, which originated in the Great Depression and are all about the illusion of unwinding on an unattainable, unaffordable tropical beach, are notorious for playing with fire. So, for aficionados of flaming cocktails it is worth reacquainting oneself with this retro, kitschy institution, which is experiencing a resurgence across the country. One of the bars offering a fun combination of fire and funk is Lost Lake in Chicago, which offers two flaming cocktails: “Tropical Itch” and “Zulu as Kono.” 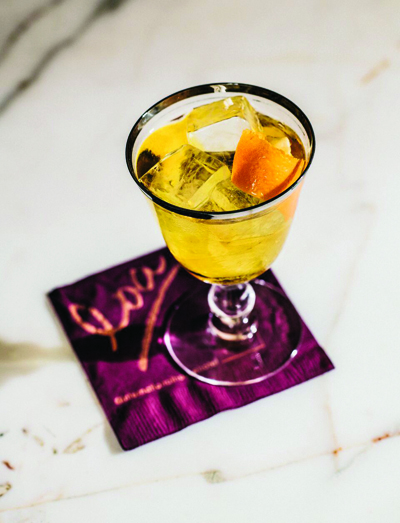 It stands to reason one could find flaming cocktails in New Orleans, and one of the best is the “Flambeaux” at Loa Bar in the city’s International House Hotel, a Beaux-Arts-style boutique property in the French Quarter. This drink — it is comprised of locally distilled vodka, thyme liqueur, lemon, butterfly pea flowers, and orange bitters — pays homage to the “keepers of the light,” the workers who used to kindle the kerosene lanterns before Mardi