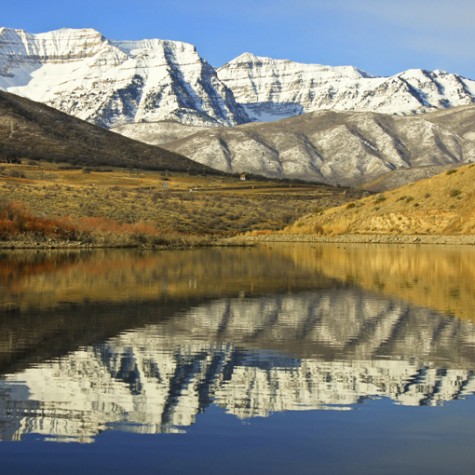 “This place in the mountains, amid nature’s casualness toward death and birth, is the perfect host for the inspiration of ideas: harsh at times, life threatening in its winters of destruction, but tender in attention to the details of every petal of every wildflower resurrected in the spring. Nature and creativity obey the same laws, to the same end: life.”  – Robert Redford

Of course, Robert Redford was talking about Sundance—Utah’s beloved mountain village and well-preserved secret resting at the base of the 11,752-foot Mount Timpanogos. The resort was created by the screen legend himself, and named after his famous role in the 1969 film—“Butch Cassidy and the Sundance Kid.” With more than 5,000-acres of space, Sundance has long been a dreamscape for affluent vacationers who welcome it as a “remote haven” (as Vanity Fair once called it). But, really, if you’re heading to the Sundance area in mid-January, you’re probably hoping for more than a premier resort experience—you’re looking for a bit of Hollywood mixed in with your getaway. And all you need to do to achieve that is head 30 miles north to Park City, where the majority of Redford’s widely celebratedSundance Film Festival takes place.

Starting Thursday, January 16 through Sunday, January 26, the event will screen some of the most anticipated full-feature films of the year, including “A Most Wanted Man” (with Philip Seymour Hoffman and Rachel McAdams), “Laggies” (starring Keira Knightly and Chloë Grace Moretz) and “Love Is Strange (with John Lithgow and Marisa Tomei), as well as screenings of shorts and documentaries, live music performances and plenty of panels. Some screenings will even take place at the Sundance Resort itself. However, you need not attend the fest to have a great time. The beauty of Sundance week is: even if you’re lounging around town, there’s so much to do! Plus, there’s more than an excellent chance of rubbing elbows with a celebrity or two.

Do: Ski. Sundance Resort features 42 immaculately groomed runs for skiers and snowboarders, and even features Night Skiing four evenings a week until 9:00 p.m. It’s also the best kept secret in town since most people will be at the film fest 30 miles away. If you’re looking to stay within Park City’s limits, hit the slopes at Deer Valley and glide past multi-million dollar mansions…and even a few of those aforementioned in-town celebs.

Stay: The St. Regis in Deer Valley. This is grandeur defined so prepare yourself for mountain-elegance. From the stunning setting amid the Deer Valley slopes and beautifully appointed guest rooms to the fabulous spa and three on-site restaurants, this is a perfect spot to make your home base. For extra value, be sure to check out the St. Regis Deer Valley Ski packages.

*Bonus info: The St. Regis Deer Valley was one of Travel + Leisure’s picks for “The World’s Best Hotels for Families.”

Food: River Horse on Main. Foodies rave about this high-end gem in Park City, which is rich in décor (horse <span “=””>paraphernalia, of course) and fantastic food. Menu items range from Oysters Rockefeller and Wood Roasted Bone Marrow to Utah Red Trout and Filet Mignon. There is also a vegetarian menu for a nice array of dishes that include Macadamia Encrusted Tofu and Pasta Primavera. If you’d rather stay loyal to the Sundance vibe, you could also try Robert Redford’s Zoom restaurant, also on Main Street. The spot is described as “casually elegant” and features a sophisticated, America-style menu with dishes like the popular Zoom Burger, Truffle Mac n Cheese and Wood-Grilled Beef Tenderloin.

* Insider Tip: Reservations may be difficult to score during the festival. Plan ahead if possible, or better yet—make sure to bring along your most connected Hollywood pal!

Live: The Sundance area is more than simply a place to visit, it also is an incredible setting to call home. And this beautiful 5,000-square foot, log-and-stone home is the ultimate in mountain living. The cavernous interior includes seven charming bedrooms, cozy wood-burning fireplaces, and is designed with a virtual wall of windows, so the natural beauty of the mountains and creeks are always within view. Imagine the possibilities of your everyday existence: biking, hiking and fishing in the summer and skiing and snow-shoeing in the winter—all in one of the most sought-after natural getaways in the country. Represented by Coldwell Banker Residential Brokerage in Orem, Utah for $3,250,000 USD.