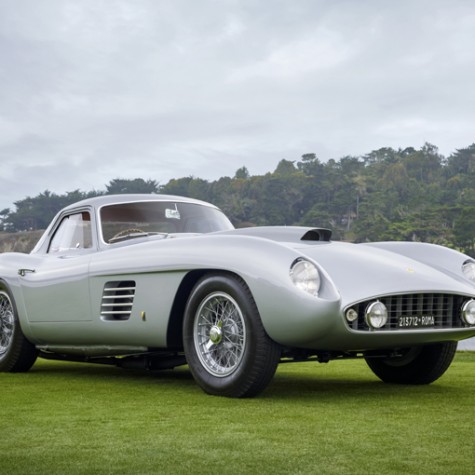 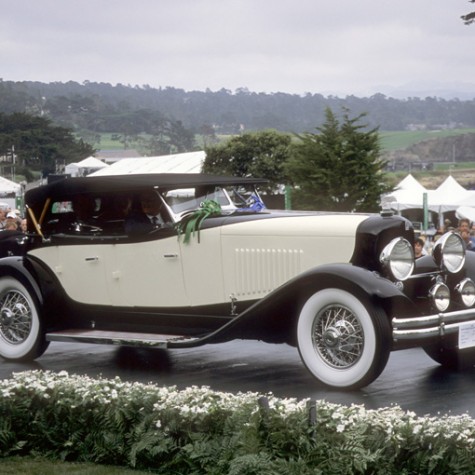 For the world’s wealthiest car collectors, there are few more important annual events than the Pebble Beach Concours d’Elegance. Set on the the world-famous 18th fairway of Pebble Beach Golf Course in picturesque Carmel, Calif., the grand finale to the Pebble Beach Automotive Week always always seems to attract a mix of serious autophiles and budding enthusiasts, old and young, men and women, as well as a celebrity guest or two (Jay Leno, Arnold Schwarzenegger, Jerry Seinfeld are among its fans) who delight in moving from tent to tent and display to display on the green. As the car world’s most anticipated show gets underway, we decided to give you a complete A to Z look at this year’s Concours and all of the events, auctions and exhibitions surrounding it.

The latest creations of the finest automotive artists of our day are displayed annually at the Automotive Fine Arts Society (AFAS) Exhibition—located right on the show field of the Pebble Beach Concours d’Elegance.

Among the most-watched and most-talked about auction cars this year, the 1956 Ferrari 250 GT Berlinetta Competizione TdF ranks among the top.  Set to be auctioned by RM Sotheby’s with an estimated sales price of $15 million to $20 million, this rare Ferrari is prized for its racing history—including a first place win at the 1956 Tour de France Auto. It was also raced and owned by the legendary Marquis Alfonso de Portago and is one of only seven Scaglietti-bodied, first-series competition Berlinettas made.

Briggs Cunningham, who served among the Concours’s honorary judges, was an American sportsman who won the America’s Cup and built race cars in an attempt to win at Le Mans. In addition to his rare race cars, the Concours will exhibit examples of his exceptional Vignale-built C3 sports cars. 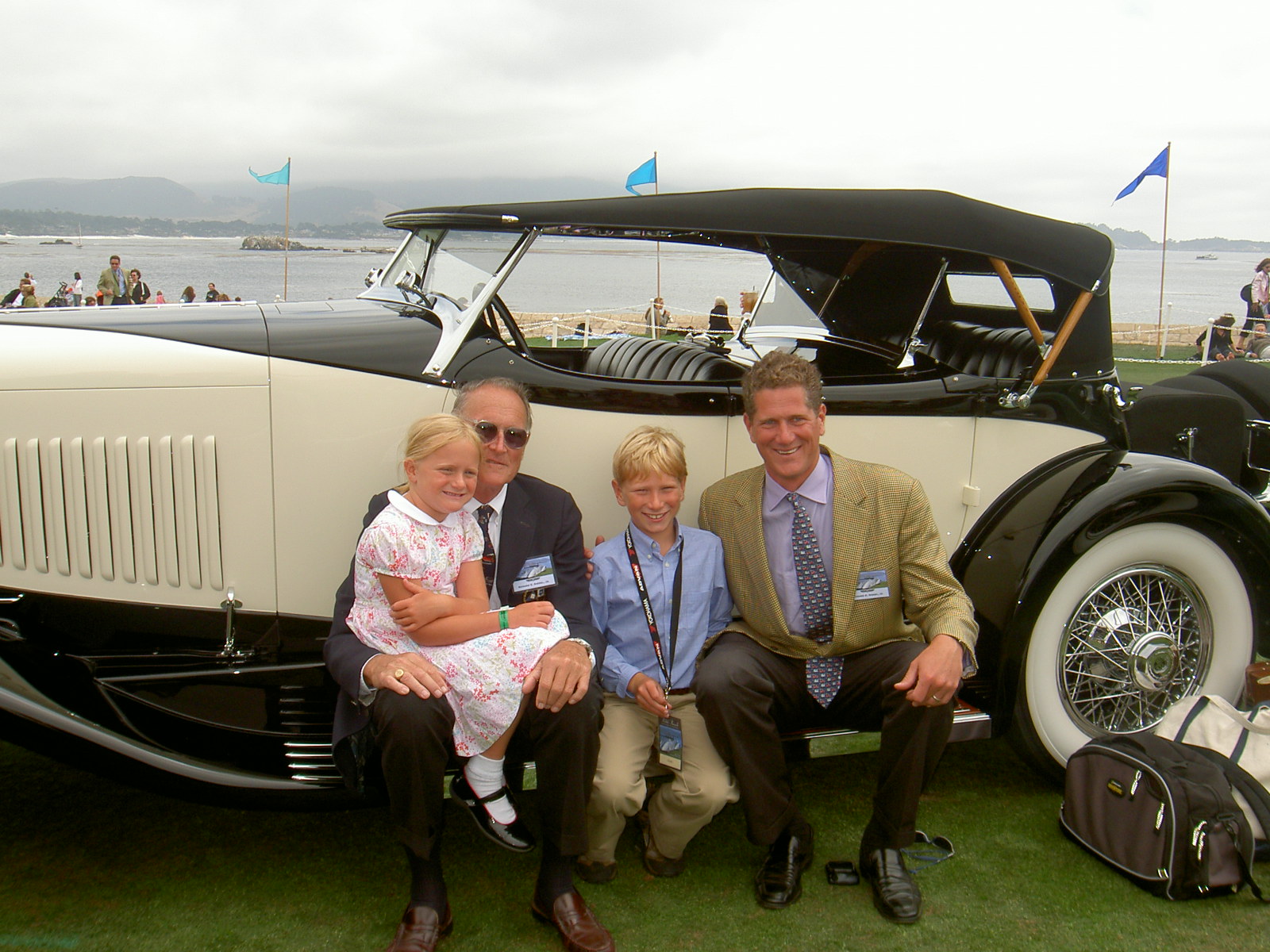 The duPont family played a major role in establishing General Motors, since their chemical company’s fast-drying paints paved the way for the use of vivid color schemes on factory-produced cars. The 2015 Concours will center around the marque that bears the duPont name. Just over 30 of these American classics are known to exist, and many of them will gather on the Concours show field.

The Exotics on Cannery Row is a haven for rare and exotic cars from around the world. Set for Friday from 4 pm-8pm, this venue showcases some of the most rare and exciting cars of our time alongside the companies that can take these cars to the next level in performance and showmanship.

We might as well just claim this now: 2015 is the year of the Ferrari.  “Our plans to feature Ferrari have been many years in the making,” said Concours Chairman Sandra Button. “But it seems particularly appropriate to be showcasing this marque now, since a Ferrari earned our top award this past year.”

If 2015 is the year of the Ferrari, then it’s also the year of the Ferrari GTO. Among the premier auctions this year, the 1962 Ferrari GTO Berlinetta is being called “the most highly anticipated seller this year,” with some experts predicting that it could go for as much as $60 million at the Bonham’s auction on Saturday. Forbes’ Hannah Elliott explains the high forecasted price tag: “1) there hasn’t been a public sale of a 250 GTO in decades; (2) the last private sale happened in the UK last October for a record (and rumored) $52 million; and (3) if this one does sell for what Bonham’s expects it’ll demolish the previous high water mark.”

Watch for Derek Hill, the new master of ceremonies for the Pebble Beach Concours d’Elegance, who takes the helm in the absence of much-beloved actor and car enthusiast Edward Herrmann, who held the position for 16 years and passed away in December 2014.

Did we mention it’s the year of the Ferrari? Well it’s also the year of Italy.  (Some collectors may claim it’s always the year of Italy.) Another case in point: the respected Italian coachbuilder, Designs by Carrozzeria Touring, was the chosen carrozzeria for many significant marques and models, including the very collectable Alfa Romeo 8C, Ferrari 166 MM Barchetta and Ferrari 212 Inter/Export.

Introduced to a global audience in the 1950s, Japanese motorcycles gained prominence in the 1960s and dominance in the 1970s. Now they move to the fore on the Pebble Beach Concours show field on Sunday. 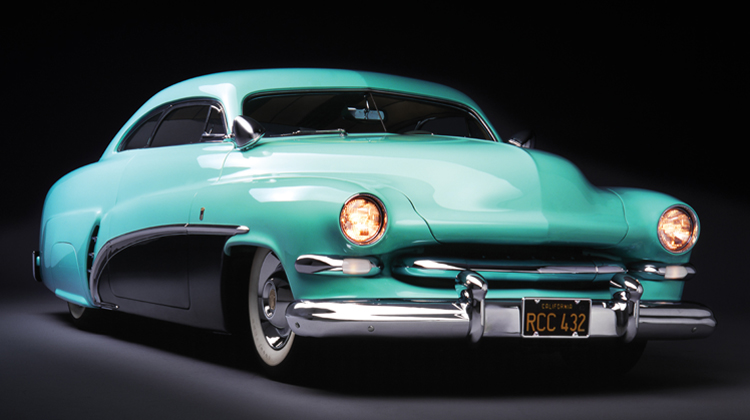 At the Mercury customs class (see “M”), one of the most eye-catching cars is an arresting lime-green ’51 Mercury by Barris Kustoms (Sam and his brother George spelled their shop, and their creations, with a K). Customized for Bob Hirohata, which was used in the B movie “Running Wild,” with screen siren Mamie van Doren, the car will be on display, along with the mildly customized ’49 Mercury coupe James Dean drove in the 1955 Warner Bros. film, “Rebel Without a Cause.”

Can you believe it’s the 75th anniversary of the Lincoln Continental?  This special marquee celebrates Ford’s iconic luxury sedan.

The first-ever postwar class of Mercury Customs will be shown at the Concours on Sunday. The most popular for customizing from the late 1940s to early 1950s, Mercury is considered by many to be the definitive custom car.

If you already didn’t know it, there is also a charitable arm of the Pebble Beach Concours d’Elegance. Donations raised by the event now total over $19 (nineteen) million .

Pope is one show you don’t want to miss. At one point, the world’s largest bicycle manufacturer, Colonel Albert Augustus Pope built automobiles from 1903 to 1915 in many configurations, including some early electric vehicles. Pope also founded the Good Roads Movement, which paved the way to small towns all over the United States.

Set for Friday at the Quail Lodge in Carmel Valley, The Quail is a world-renowned motorsports event featuring some of the world’s finest and rarest automobiles coupled with luxury lifestyle and fine culinary components. The 2015 themes include Long Tail Cars of Le Mans, Coachbuilt Ferraris, and Iconic Pre-1965 Porsches. Traditional classes are Pre-War Sports and Racing, Post-War Racing, Post-War Sports, The Great Ferraris, Sports and Racing Motorcycles and Supercars.

Located in the Ballrooms at the Inn at Spanish Bay and open from 10:00 a.m. to 5:30 p.m. Thursday through Saturday, RetroAuto is the place for savvy automobile connoisseurs and collectors to find historic automobilia, automotive art, and the latest luxury goods to accompany the automotive lifestyle.

While not the most expensive car of the week, Steve McQueen’s 1976 Porsche 911 Turbo will be auctioned by Mecum with an estimated sale price of $1 million. Typical McQueen—it was built for speed and comfort—with a 234-horsepower engine, sunroof, black sport seats and a slate gray color specially ordered by the late actor and racing legend himself.

On Thursday, the Pebble Beach Tour d’Elegance will trace portions of the original 17-Mile Drive, traverses nearby mountains and valleys, and pauses for a time in charming Carmel-by-the-Sea. It’s the annual driving event that delights most entrants and spectators. The official schedule can be found here.

Here are just a few of the shows that allow you to get a peek inside the vehicles and under the hood: Wednesday’s The Little Car Show, Friday’s Legends of the Autobahn and Saturday’s Concorso Italiano.

The track-only 800-horsepower Aston Martin Vulcan is one concept car you don’t want to miss during the Concours. The impressive hypercar boasts a naturally aspirated 7.0L V12 engine that has already gone down in history as one of the British automaker’s most extreme, powerful and limited-run cars ever produced. 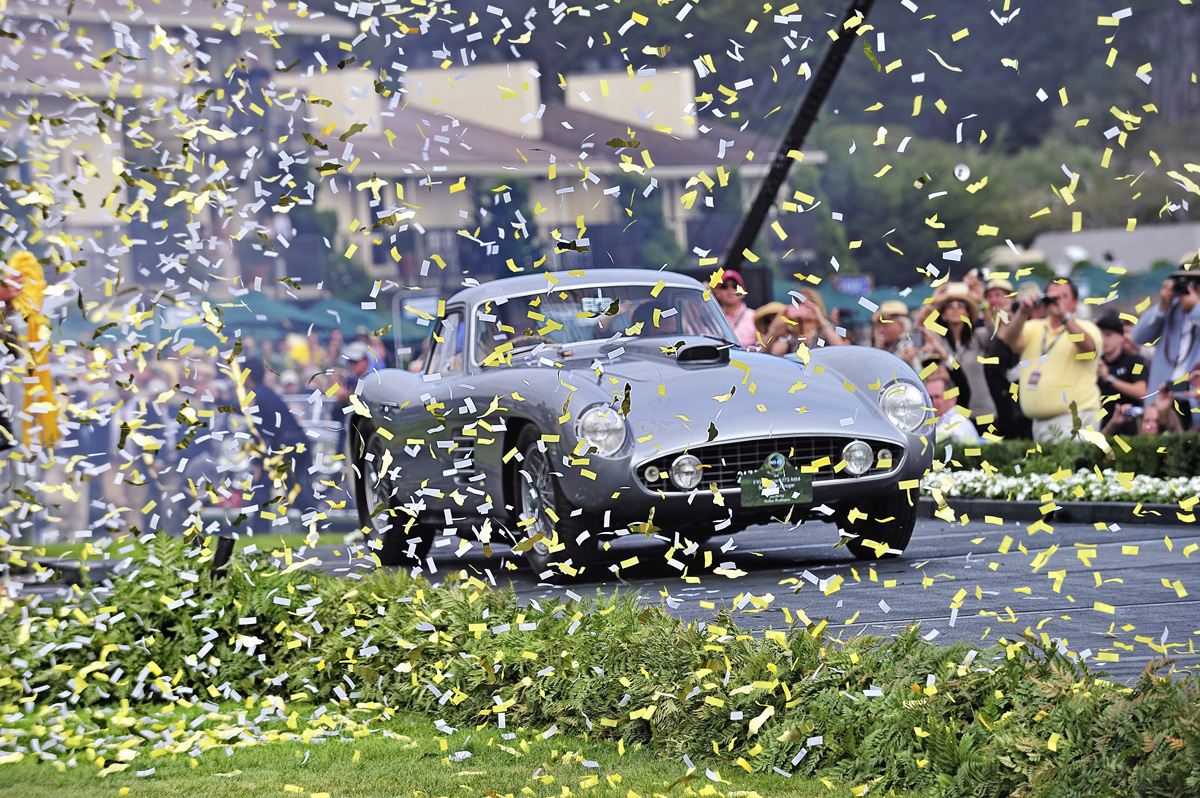 A silver 1954 Ferrari 375 MM Scaglietti coupe, owned by former Microsoft president Jon Shirley of Medina, Washington, and originally built for filmmaker Roberto Rossellini, took home the grand “Best in Show” prize least year—a rare feat for a postwar car. (It’s happened only seven times in 64 years).  Who will be this year’s winner? Awards will be presented between 1:30 pm and 5 pm on Sunday.

Among the exciting panels this year, there are a few—but make sure to visit Saturday’s “The Callum Brothers Talk Cars with Industry Icons.” Among the headliners is Franz von Holzhausen, chief designer of Tesla, who is responsible for the design of the Model S and Model X. If nothing else, it will be enlightening to listen in on a conversation between Holzhausen and a car design icon like Ian Callum.

The yellow 1960 Ferrari 250 GT SWB Berlinetta Competizione is yet another auction sale to watch. Estimated to sell between $17 million to $19 million, the car was one of about 45 alloy-bodied Competizione versions produced in 1960. It placed seventh at the 1960 12 hours of Sebring as a NART entry, and is one of the best restored examples in the world.

Lamborghini’s convertible Aventador LP 750-4 Superveloce Roadster will make its debut at The Quail, a Motorsport Gathering. Besides the Superveloce-sourced naturally-aspirated 6.5-liter V12 engine that makes 750 horsepower at 8,400 rpm and over 500 lb-ft. of torque, the hand-built 12-cylinder sends the Roadster from zero to 60 mph in less than three seconds and on to a top speed of roughly 220 mph.

General Admission Tickets are $300 in advance and $350 on day of show. Club d’Elegance Tickets are $750. For more information, visit www.pebblebeachconcours.net. A complete schedule of events can be found here.

Pebble Beach Automotive Week: A Guide From A to Z

Pebble Beach Automotive Week: A Guide From A to Z