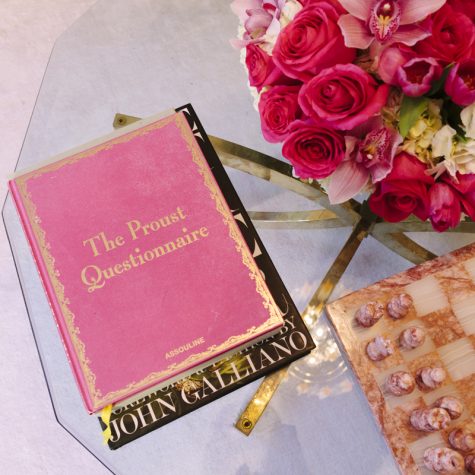 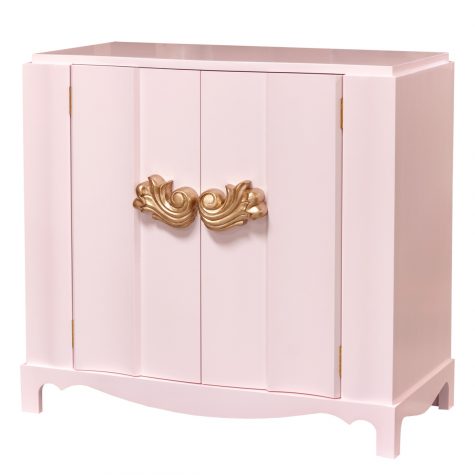 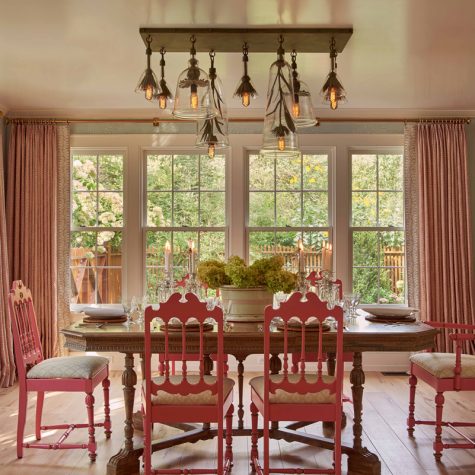 “Remember when pink was déclassé?” Véronique Hyland ruminated in an August 2016 column for New York magazine. The question bears repeating, even a year later. After all, we are still living in the age of Millennial Pink.

Just what is “Millennial Pink,” you ask? Also known as “Tumblr Pink” and “Scandi Pink,” it’s a muted shade that lies somewhere between beige and blush. Hyland called it “ironic pink” or “pink without the sugary prettiness.”  Lauren Schwartzberg has described it as “androgynous.” 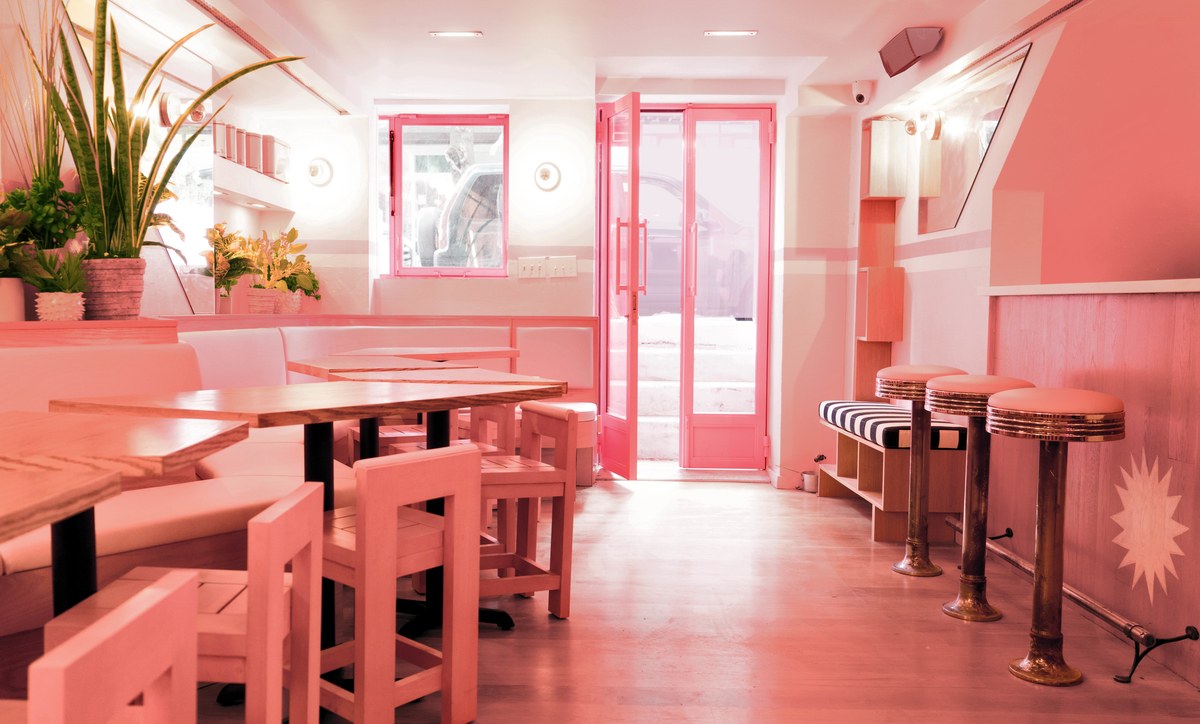 Now Millennial Pink has weaved its way through the runways at Gucci to jewelry stores like Tiffany and Cartier to the furniture showrooms of Milan. Interior designers are embracing the trend too, unapologetically dressing their walls, drapes and chairs in various shades of Millennial Pink. In short, it’s turning up everywhere — on our iPhones, our clothing, our jewelry, our furniture, our art, our restaurants and — even our plumbing hardware. And, it doesn’t appear to be going anywhere any time soon.

So, when and how did pink become so in vogue, and so refreshingly luxe?

When Everything Started Coming Up Roses

The trend can be traced back to 2016, when Rose Quartz became one of Pantone’s two colors of the year. 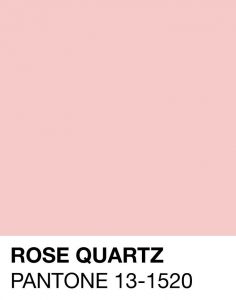 Declaring Rose Quartz “a persuasive yet gentle tone that conveys compassion and a sense of composure, the color company later went on to cast Pale Dogwood — a closer match to Millennial Pink — among its top 10 colors to watch on its Fashion Color Report Spring 2017 report.

Pale Dogwood is “quiet and peaceful” and “engenders an aura of innocence and purity,” according to Pantone.

Since then, Roxy Sowlaty, a Beverly Hills-based interior designer and star of E!’s “Rich Kids,” has seen an uptick in clients asking for the color. 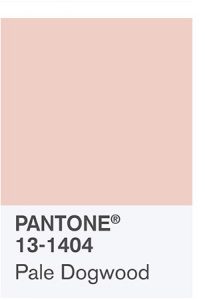 “Every female client of mine over the past one to two years has come to me seeking a full pink or blush look for their home,” says the fellow millennial. “I just completed an entire home in solely dusty pink velvet, white and rose gold. Pink tones are becoming the new neutral in design. I can’t name a recent project that I haven’t used a pop of pink for!”

New York-based designer Phillip Thomas has also noticed that he has been incorporating pink more often into his clients’ interiors.

“I am not sure if it’s due to my clients’ passion for it or more so to my realization of how pink can enhance an interior,” he says before recounting a recent client who recently challenged him to incorporate pink into as many of their rooms as possible.

Millennial Pink is the New Neutral

Usually color trends come and go — so why has Millennial Pink remained in such desire and demand?

“It’s a nuanced neutral,” offers Leatrice Eiseman, executive director of the Pantone Color Institute. “It has that staying power.”

Sowlaty and Thomas, along with many other contemporary designers, have completely embraced the idea of pink as a neutral. Says Thomas: “While I wouldn’t want to label them as the ‘New Beige,’ the new pinks have become a wonderful backdrop to any style interior.” 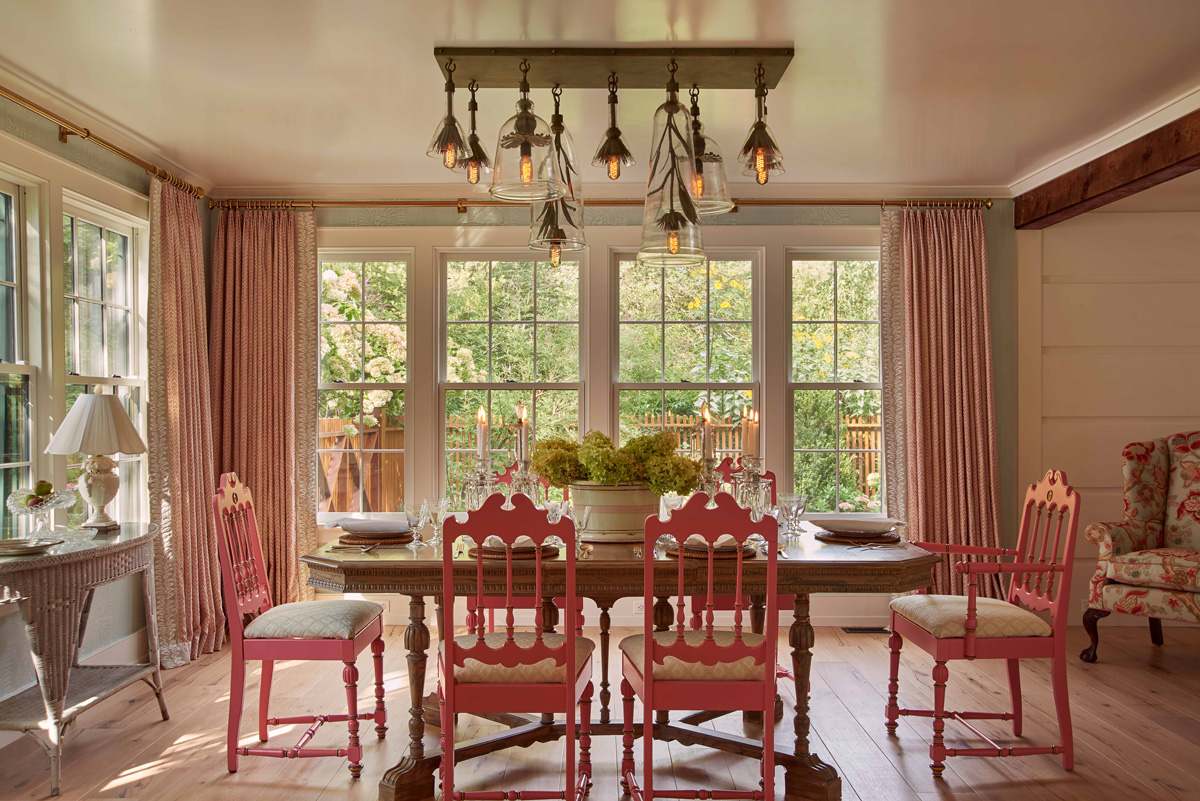 Designer and “king of color,” Carlton Varney, offers another explanation for pink’s staying power. He says pink is “more flattering than beige, grey, or white.” (Varney knows a thing or two about pink. He is the author of “In the Pink: Dorothy Draper–America’s Most Fabulous Decorator,” and he’s also the president of the company that still bears Draper’s name.) Because the hue is so “flattering to the face” and adds instant warmth to interior spaces, Varney says that “all successful ballrooms in hotels and resorts are painted pink.” Thomas explains further: “When natural or artificial light is reflected off a pink surface, such as a ceiling for example, it casts a warmth that can be very familiar to a client as well as flattering to their complexion. Pink has a warmth and a glow that immediately brings pleasure to the person experiencing an interior.”

Millennial Pink is not only flattering and warm — it is also “ambivalent.” While traditional pinks may have evoked feelings of femininity and girliness, Millennial Pink is different — like toughness wrapped in a soft shell. Sowlaty says the hints of peach, grey, lilac and cream in Millennial Pink have made it a more “sophisticated” and “subtle” hue.

“Previously, pink was mostly thought of as a color relating to youth and immaturity,” she theorizes. “But I feel that as women are redefining their power and role in the world, it is only fitting that the color pink does the same. Women are powerful and sophisticated while still maintaining their femininity so why can’t the color pink do the same?”

Millennial Pink, in all its complexity and hard-to-define qualities, has become the modern answer to chic, defining a new generation of luxury in interiors.

“Pink is the color Elsa Schiaparelli made famous — and Dorothy Draper with her sense of style, was to decorating what Chanel and Schiaparelli were to fashion,” proclaims Varney. “Millennial pink is the new fab, because young people look for a touch of glamour.”

Millennial Pink is moving its way into our residential spaces in various ways. Thomas has used pink in all kinds of interior spaces — except for male spaces, such as boys’ bedrooms. Sowlaty — a major fan of pink herself, who has unapologetically dressed her Beverly Hills abode in the color — says her “go-to rooms” to bring in pink tones are bedrooms, living rooms and office spaces.

“By adding blush, peach and dusty pinks into an interior space, it adds a softness and hint of femininity that’s not too overbearing,” she explains. “Whether it’s pale pink tones in paint, pillows, drapes, accents, rugs or lighting, there are ways to bring in pink that are soothing and beautiful that even men love and appreciate too. When designing with pink, I often mix it with white and rose gold and brass metals to compliment it, and use charcoal and grey tones to contrast it.” 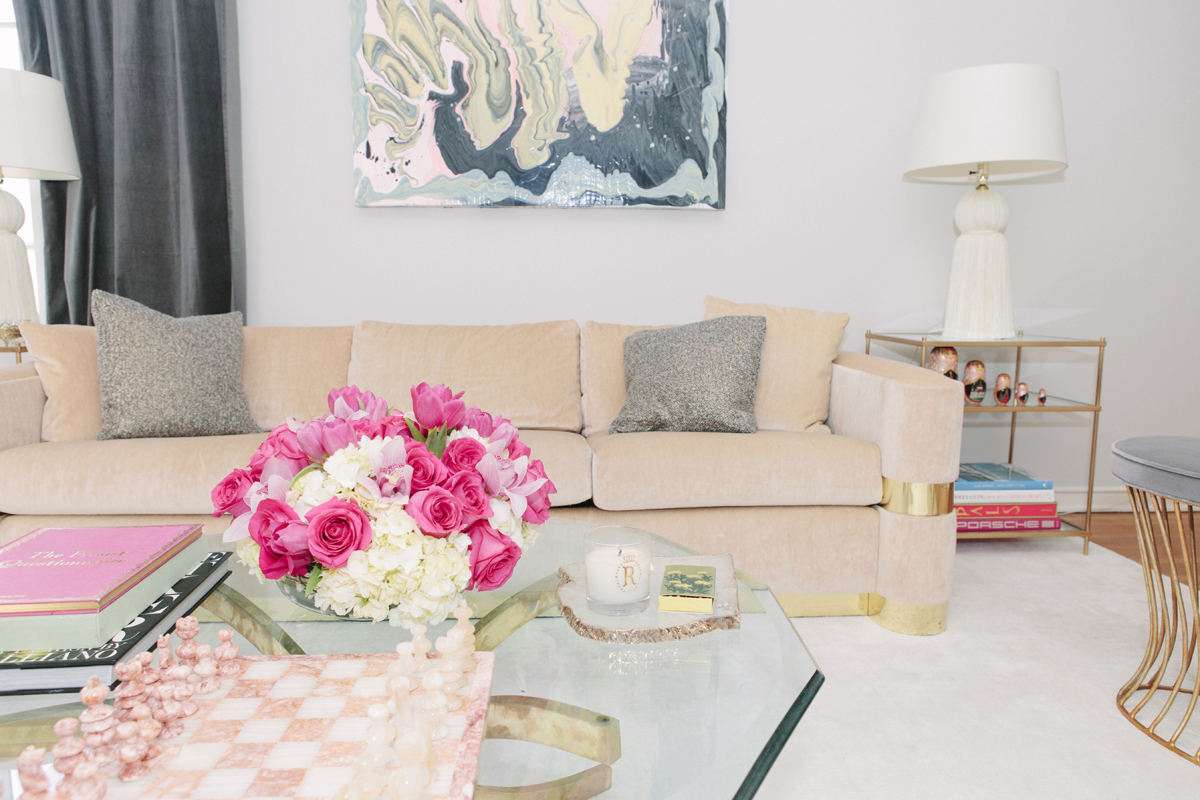 Thomas says his goal with his pink-obsessed client was to use the color sparingly in such a way that it wouldn’t dominate his client’s interior color palettes, but enhance it. Massimo Minale — the edgy, leather-wearing, motorcycle-driving designer and owner of Buster + Punch, a London-based home fashion label — would also agree with the notion that less is more when it comes to Millennial Pink. For his own home in Stockholm, he dared to bring a dusty hue into his bedroom — hardly a sanctuary of sweetness. He balanced any suggestion of the saccharine with contrasting cooler tones and dark hardware from his collection.

“The key to styling Millennial Pink in the home is choosing contrasting cooler tones such as pewter, concrete greys or green toned blue greys,” he says. 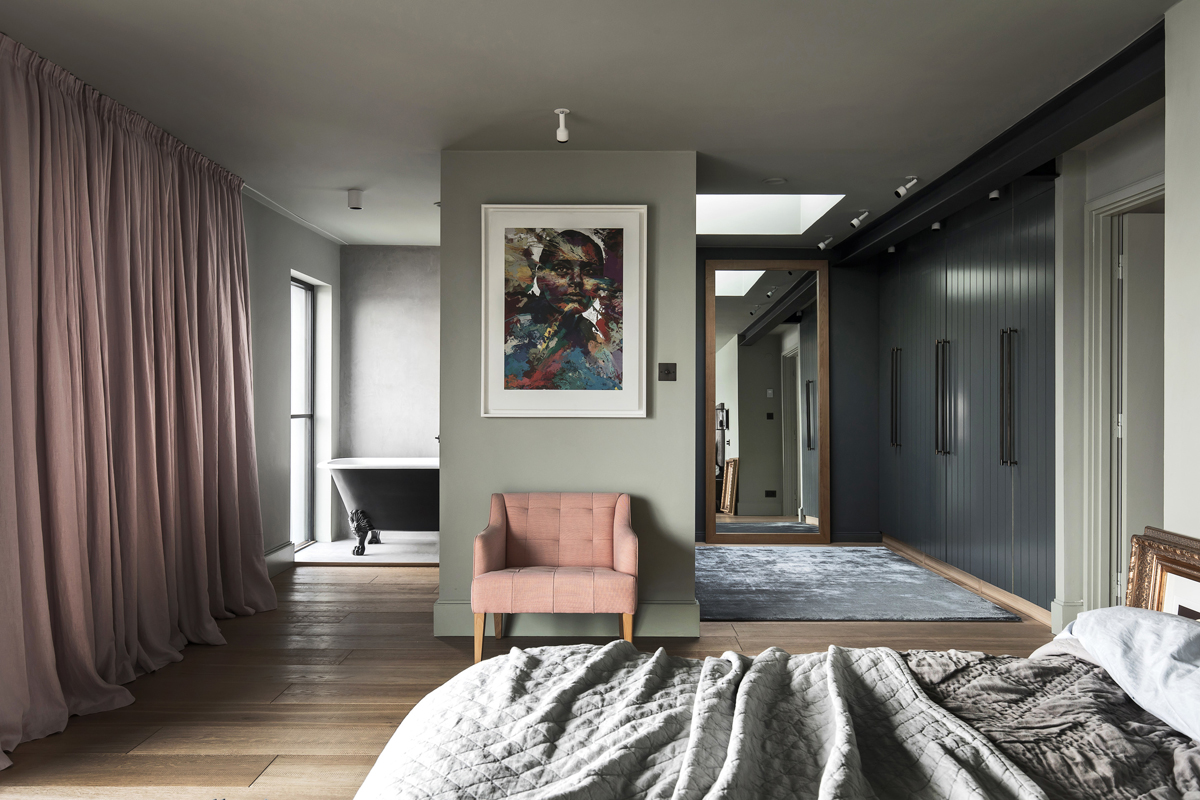 Varney is known for using pink on the walls and ceilings of resorts as well as in commercial properties. “Combine pink with chocolate brown, navy blue, rich forest green, black lavender, and a room scheme is born,” he says. “When I plan my collection of products for my HSN television appearances, I always include sheets and bed throws in ombré pink tones. The pinks always are five-star sellers.”

Some interior designers are also using Millennial Pink to breathe new life into classic furniture pieces.  For example, interior designer Robyn Branch recently took a furniture piece by Dorothy Draper/Kindel Furniture that has been around for decades: the Monte Carlo Chest. Working with Kindel’s decorative paint experts, she gave the chest a modern twist with a custom pink lacquer to appeal to a younger affluent audience. 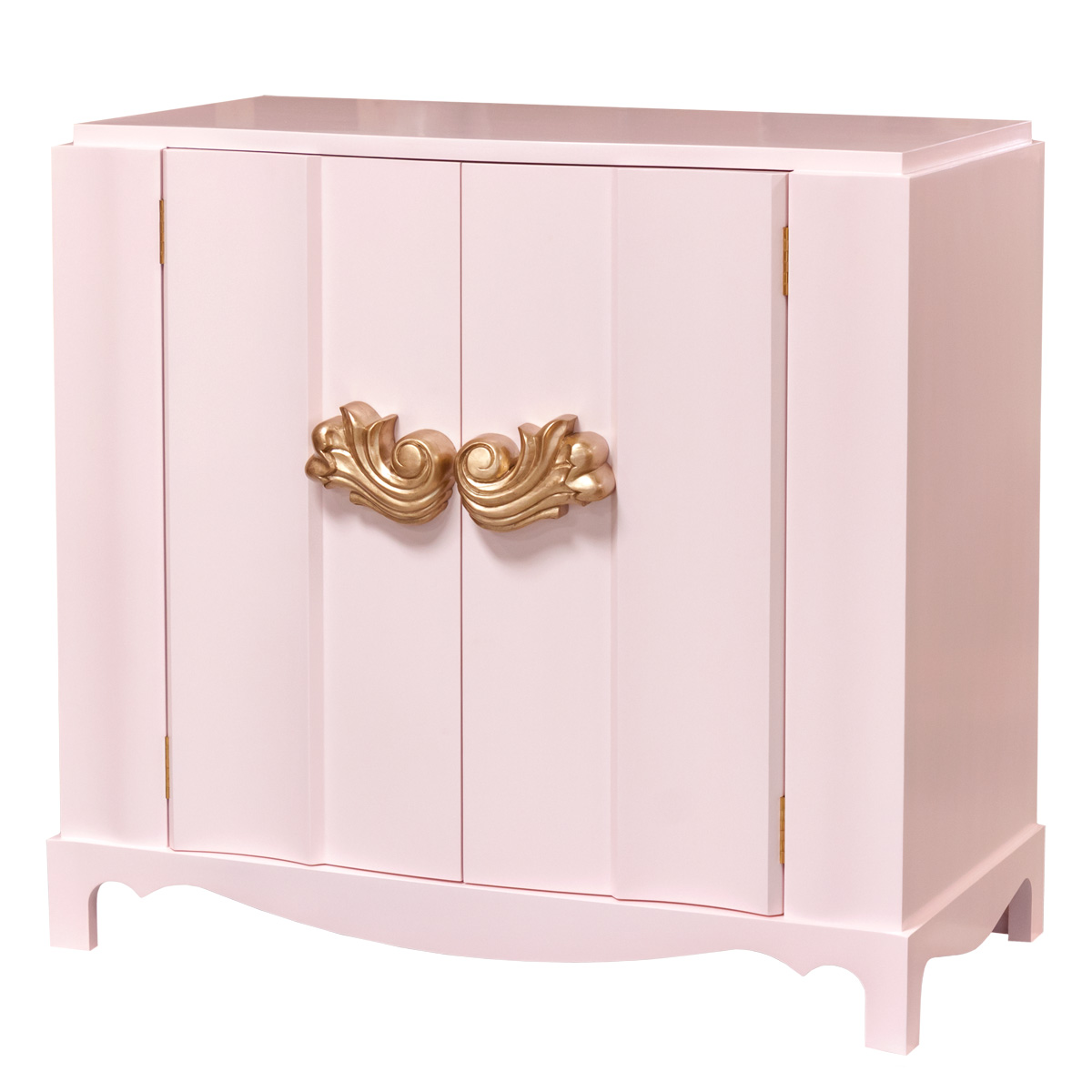 Kindel has other Millennial Pink offerings, including another Draper classic — the España Bunching Chest in a peach-salmon hybrid color (which Varney customized) that is a popular choice among discerning younger buyers. 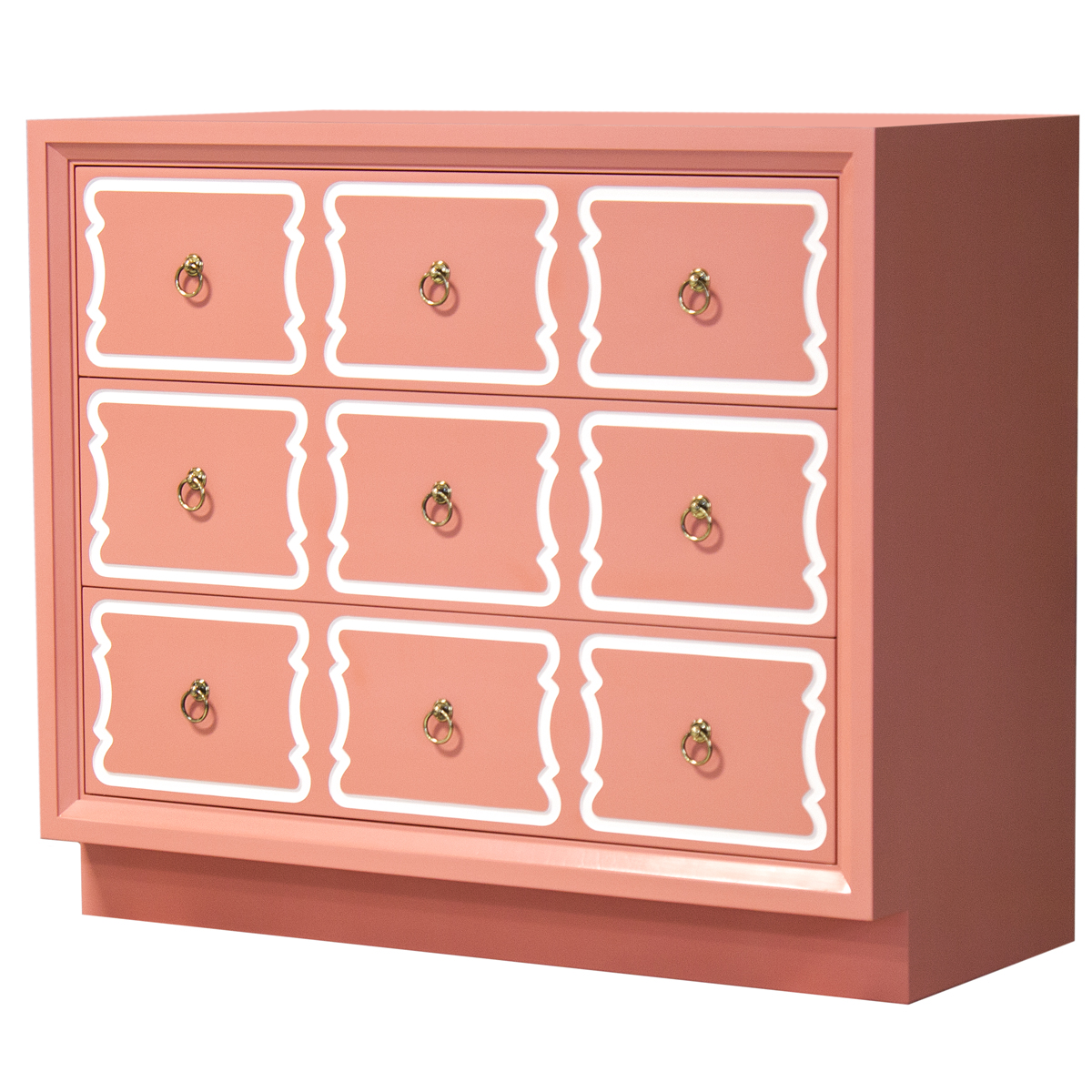 Countless manufacturers in the luxury home decor space have also capitalized on the Millennial Pink craze. At Milan Design Week this April, Spanish brand Sancal and Note, a Swedish design studio, chose to launch the “Isla” sofa in a soft pink. 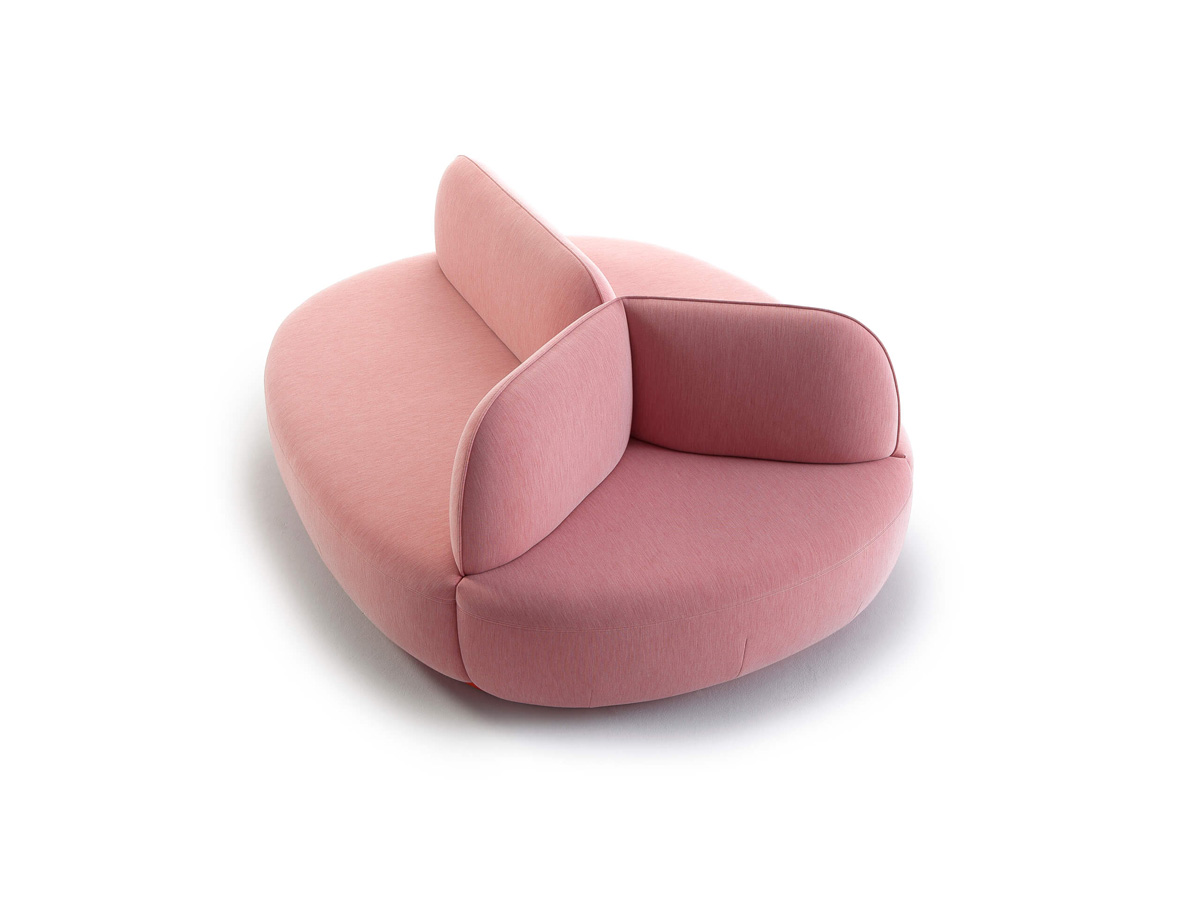 Isla by Sancal and Note

Even manufacturers who have had pink versions of their home decor products and accessories for years are seeing an uptick in interest for them. Stone Forest, a high-end manufacturer of natural stone products, was way ahead of the curve when it debuted a gorgeous collection of pink onyx vessels in 2004. The rare stone has been so sought-after that the company is currently sold out of it, but “searching hard to locate some blocks.” 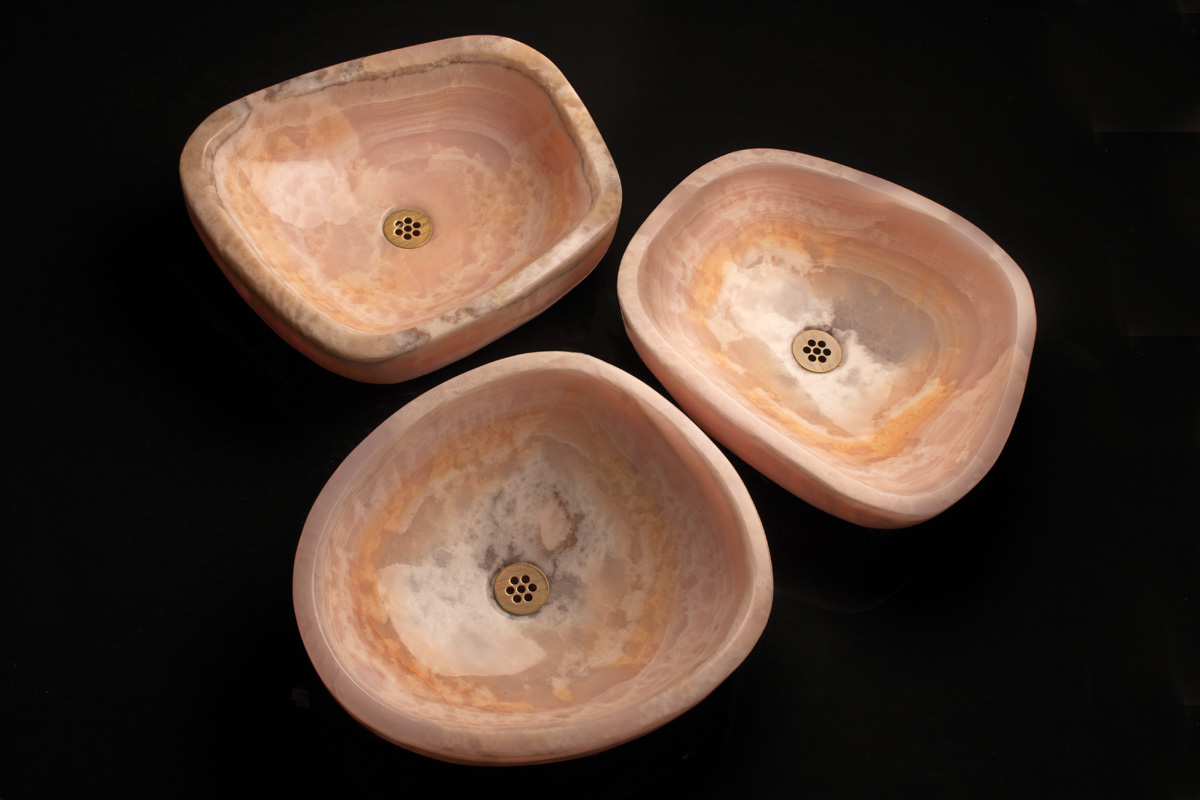 The always fashionable French bathroom manufacturer, THG, launched a chic rose gold finish for several of its faucet collections, including the contemporary, Collection O by Studio Putman (Starting at $2,000). First debuting in 2015, the rose gold finish has proved to be especially popular among the younger generations and those who have a modern aesthetic, according to THG’s director for North America, Pedro Uranga. 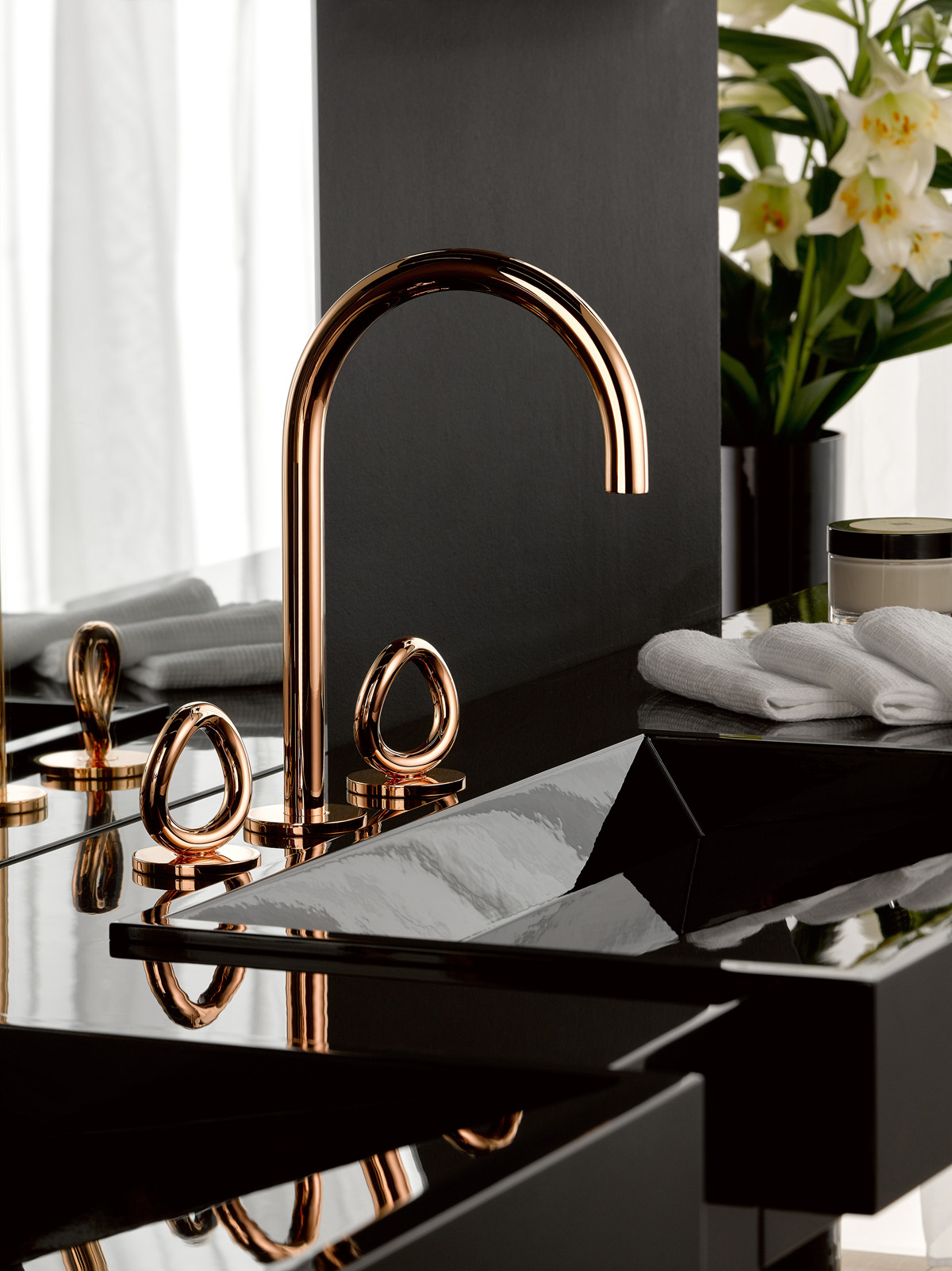 “We always track what’s happening in the design world — whether it’s jewelry, fashion or auto, and we started to see rose gold transition into the interior design space about 2-3 years ago,” says Uranga. “Rose gold is a play on gold, which can feel old and tired to a lot of younger people. It’s a way to maintain the luxury feel that you might get with gold, but it’s more playful, youthful and warmer.”

The sophisticated finish has been such a success that THG has since unveiled the option in two other faucet collections, Soho and Anoa. Uranga says the most interesting thing about the Millennial Pink trend is that many designers see it as a way to give their clients a unique experience. He notes: “We work with many of the top designers and their clients will say, ‘I don’t want anything in my house that has been seen by anyone else.’ So the finish has become an element of differentiation in the home. It has become a way for homeowners to balance good taste with sophistication and a sense of uniqueness.”

Uniqueness has been a defining quality in luxury. But as the Millennial Pink trend plays out, there is also a danger that its ubiquitousness will eventually be seen by affluent homeowners as commonplace.

The real trend, Uranga points out, is the gravitation towards bespoke in the luxury home space: “People are going for customization, and a variety of colors and unique finishes.” Perhaps that’s the real undercurrent behind the modern Millennial Pink movement: the affluent homeowner’s authentic desire for that one thing that no one else has.

Millennial Pink is the New Color of Luxe for the Home

Millennial Pink is the New Color of Luxe for the Home