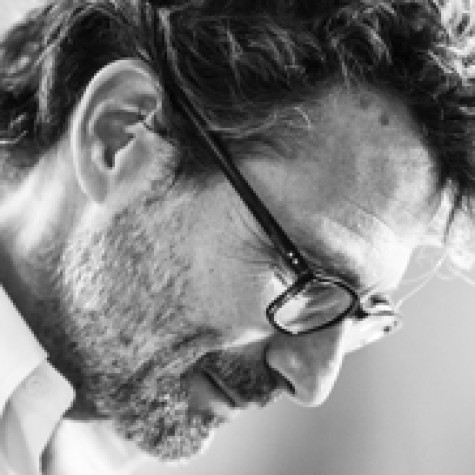 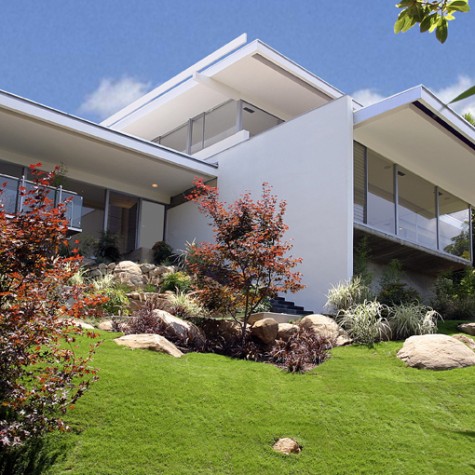 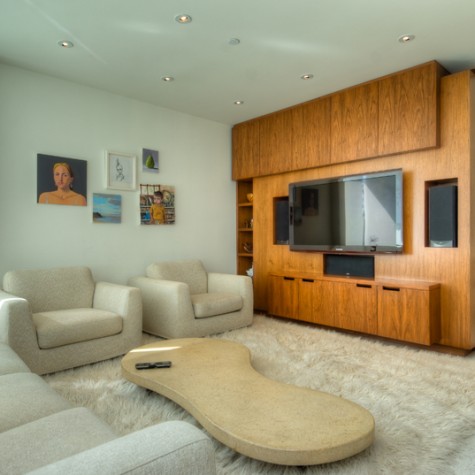 The Rat Pack is back? For some architects—like John Bertram—the form of modernism once immortalized by Ol’ Blue Eyes and Dean Martin never really left. His namesake firm is best known for restoring homes from the midcentury period, including those designed by Richard Neutra (1892-1970), whom many consider to be one of the founding fathers of California Modernism. 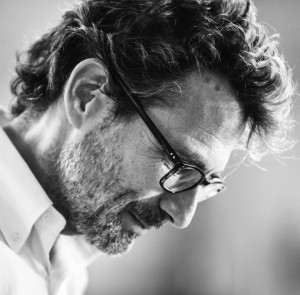 To date, Bertram has applied his hand to five historic Neutra residences, including the Brown and Hammerman houses in Bel-Air, as well as his own—the 1939 McIntosh house in Los Angeles. (One of Neutra’s most famous and most photographed homes was the 1946 Kaufmann House in Palm Springs, a frequent stop on Modernism Week tours.) The clean lines, smooth surfaces and indoor-outdoor connection were all hallmarks of Neutra, and have since been adapted by Bertram and a newer generation of architects. The draw to the midcentury is natural, says Bertram, because “these homes are very livable, flexible and less fussy.” They’re also understated.

“If my obituary included the words ‘understated architect,’ I think I would die a happy man,” proclaims Bertram, if not a little a facetiously. “Most of my work I’d characterize as subtle and discreet.”

For the 10-year anniversary of Modernism Week, we sat down with the modest architect to ask him about the modernist legends who have gone before him and how he finds beauty in the everyday—in the tiny yet meaningful connections built between the house and the humans living in it.

Previews Inside Out Why does modernism speak to you as an architect?

John Bertram I’m drawn to the rational and the pragmatic in modernism. For me, purity of line and clarity of detail have always carried an inescapable allure. That certain purposeful lack of fuss and inherent restraint that characterizes much of the architecture from the period is, for various reasons, difficult to achieve nowadays, and that only makes it more appealing.

Previews Inside Out You’ve restored five Neutra homes in your lifetime. What was the most significant thing you learned from those experiences?

John Bertram Neutra was a great architect, and he was also remarkably consistent. He had a trove of details and an almost standardized kit of parts to which he turned again and again. Yet, instead of remaining static, these details evolved and improved over time, and, as a result, it’s been interesting to see firsthand how certain details were executed on different projects. Likewise, I also find myself using some of the same details from project to project, refining them a bit each time to make them look and function better.

Neutra was also an undisputed master of siting his houses, and he is celebrated for his almost magical ability to work with problematic lots. A case in point: a few years ago I spent several months exploring ways to expand one of his houses, which proved incredibly difficult because, although it appeared effortlessly and casually situated, it was very cleverly shoehorned into the lot.

Previews Inside Out Why do you think Neutra has remained so revered in the design world?

John Bertram On a purely pragmatic level, Neutra had all the hallmarks of what we’d now consider a very successful brand. Supremely talented, charismatic, ambitious and a relentless champion of his own work, perhaps most importantly he was also extremely prolific and had a clearly identifiable aesthetic throughout his entire 40-year career. The designer Paul Laszlo, a near contemporary, said that Neutra’s style was his personal religion. To be sure, there is as much of the evangelist and proselytizer in him as there was in his former employer Frank Lloyd Wright. But it’s the planarity and the slenderness of structure in Neutra’s work (which Wright derided as looking “thin and cheap”) that still seems radical today. 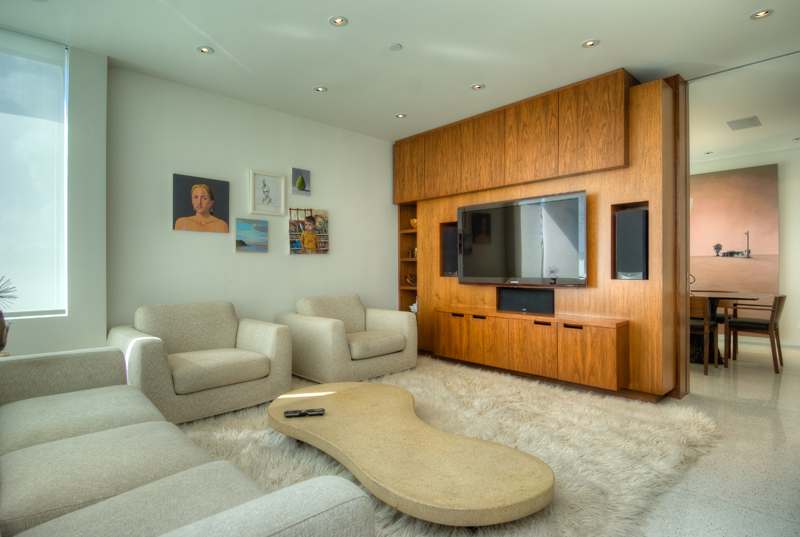 Previews Inside Out In what ways have Neutra and other architects of his era inspired your work?

John Bertram Outwardly, most of my work clearly owes a great debt to Neutra among others, but let me provide a less obvious example. Neutra was certainly not alone in his use of wood elements such as built-in seating, casework and walls to unify his interiors. In most of my projects, these tend to be functional and integral to the overall design. I find they help to activate the space and act as mediators between the architecture and the furnishings, not to mention the fact that I love wood and I absolutely adore designing and detailing cabinetry and built-ins.

Previews Inside Out You live in a Neutra house—what’s it like?

John Bertram The size and layout of the McIntosh house actively encourages us to embrace austerity, since there just isn’t enough room to have too much of anything. It definitely discourages collecting. The happy result of this is twofold: we focus on the exterior, our backyard garden and the surrounding view, and we focus on the house itself, which, when properly appreciated, has all of the serenity and jewel-like quality of a Japanese tea house. It is supremely functional in the sense that we are able to focus with gratitude on the abundance elsewhere in our lives: health, friends, each other. Of course, I’ve always been attracted to smaller, more intimate spaces, and two favorite projects of mine are very small: a writer’s studio nestled up against Griffith Park and a hillside studio for a fashion photographer (unfortunately unbuilt).

Previews Inside Out Did you do any restorations?

John Bertram Fortunately, most of the house is largely intact, including, incredibly, all of the Philippine mahogany built-ins, so restoration has been mostly limited to occasional small repairs such as the rebuilding of a window frame or the replacement of a few boards of redwood siding. However, we are tempted to restore the original interior colors, including the cobalt blue and chocolate-brown walls, and the blue Formica countertops in the kitchen. And although the main flooring material is and has always been carpet, there is lovely Douglas fir underneath that we are considering liberating. Lastly, and most ambitiously, we’ve been envisioning a small, complementary guest structure/retreat in the backyard that would be an homage in miniature to the master.

We are extremely fortunate to maintain a living link with the past through Harrison McIntosh (the noted ceramicist and son of the original owners), who turned 100 last year, and his daughter, who have given us many photographs of the house and have answered many questions. At some point, we plan to acquire one of his pieces to place in an appropriately important location.

Previews Inside Out If you were looking to purchase another landmark architectural home, what elements would you look for?

John Bertram Several years ago, I had the opportunity (that I passed up) to purchase a lovely house on Wonderland Park Avenue that I had remodeled and restored for a wonderful client. On a full acre, it was designed by Leland Evison in 1950 for Oscar and Audrey Fuss and retained all of the original landscaping by Garrett Eckbo. The entire house was constructed of redwood, cedar and glass, with absolutely no drywall and only a single plaster wall dividing the carport from the living spaces. I created an interior constructed entirely of vertical grain Douglas fir, including all the walls, doors and cabinetry. All that wood gave the house a warmth and intimacy that was incredibly special. A house like that is a dream of mine. 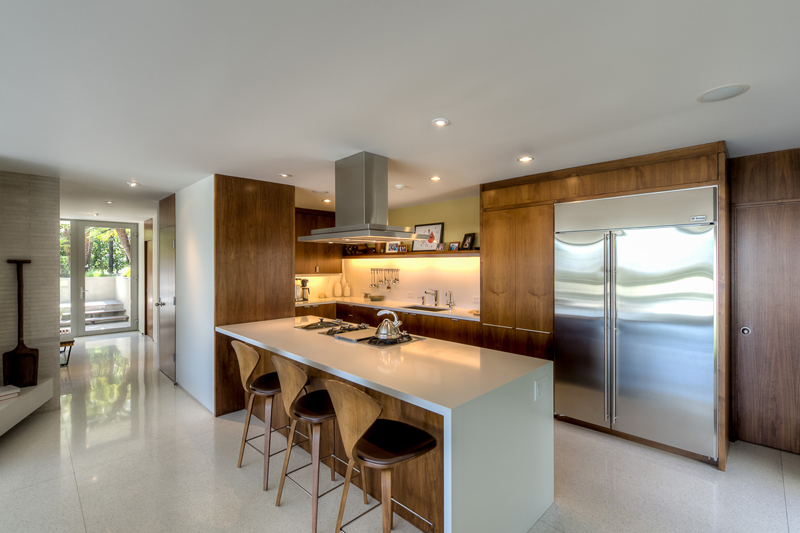 Previews Inside Out Looking beyond LA, why do you think modernism took off in Palm Springs?

John Bertram A number of locations within a 100-mile radius of Los Angeles were retreats and recreational outlets for the entertainment community seeking to escape from Hollywood, including Santa Barbara, Ojai, Rancho Santa Fe and even Apple Valley, but Palm Springs was a clean slate, architecturally speaking, and afforded opportunities of invention and reinvention not present in other locations. Ample credit must be given to the qualities of the place itself: the extreme summer heat, the near constant sunshine, and the relentless flatness of the area beneath the mountains that influenced to a great degree the low-slung horizontality of the architecture that flourished where there was no view and nothing to look at and therefore no reason to build upward. Also, there was the predominance of reflective and low-maintenance white plaster, which suited a relatively transient community in a climate that was utterly hostile to wood.

Previews Inside Out Out of all the examples of modernism in Palm Springs, which historic house stands out to you most and why?

John Bertram Different houses stand out for different reasons, from the misplaced but unassailable genius of Crombie Taylor’s late-modern Rosenbaum House to the scene-stealing celebrity and near-ubiquity of Neutra’s Kaufmann House, but it’s difficult not to look to Albert Frey’s first house as utterly paradigmatic of modernism. Built in 1941 (not to be confused with Frey’s later 1953 addition to it, or his second house built among the rocks), it is astonishing in its rigor, simplicity and economy. In particular, the photograph of Frey reclining in front of his newly completed house on its dead-flat and scrappy lot, all 320 square feet of it built for a cost of $3,500, exemplifies and sustains the seemingly impossible dream that architectural genius and a very small budget can coexist in a single structure. The optimism and promise present in that photograph are the reasons I became an architect.

Previews Inside Out Why do you think contemporary architects return to midcentury architecture repeatedly?

John Bertram To those willing to devote time to careful study, midcentury modern architecture offers a multitude of practical lessons and interesting choices that are pertinent to life today. But I think what is most often lost in the translation is that, with many notable exceptions, of course (like, for instance, Sunnylands), the work of the period was smaller, simpler, cheaper and humbler than it appears to us now. The unfortunate irony is that to emulate it today can be very expensive, which is another reason why slavish devotion to modernism can be a bit absurd. Also, at a remove of 50 years, nostalgia is undoubtedly a factor. Ultimately, however, the best modernism is arguably architecture’s high-water mark, and it represents a time of great promise and opportunity.

John Bertram founded Bertram Architects in 1999. He has been designing and restoring midcentury homes in and around the Greater Los Angeles area since 1997.