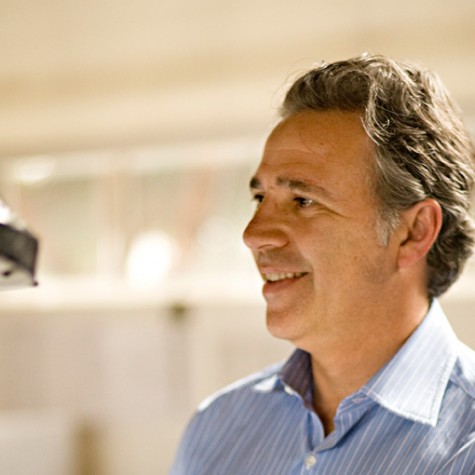 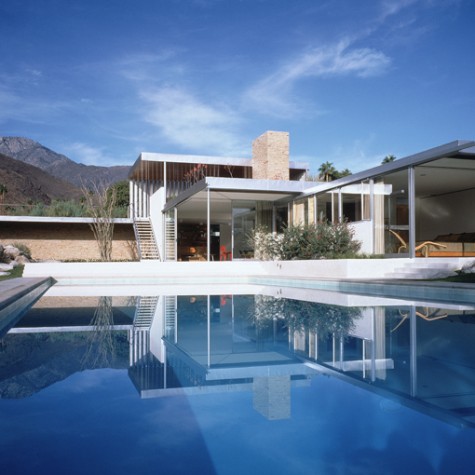 Few homes are more legendary than Richard Neutra’s Kaufmann House in Palm Springs, California. Commissioned in 1946 by Edgar J. Kaufmann Sr., the five-bedroom house has been called “one of the most important examples of International Style architecture in the United States.” Photographer Julius Shulman also immortalized the desert retreat in his now iconic 1947 photograph of the house aglow against the mountains, with Mrs. Kaufmann backlit dramatically near the pool. Needless to say, when architecture firm Marmol Radziner was commissioned in 1993 to restore it, the pressure was on to keep the home’s original spirit intact. “Any time you’re dealing with a very significant home, you feel the eyes of many historians watching your every move,” explains Leo Marmol, FAIA. “It requires you to be very purposeful, concise and consistent with a preservation philosophy throughout.” Following completion five years later, the restoration project garnered both awards and international media attention, putting the firm on the design map… and landing them a coveted spot on Architectural Digest’s AD100. The magazine wrote in 2012: “Leo Marmol, Ron Radziner, and the design-build firm they established in 1989 became the go-to architects not only for rescuing Southern California’s modernist masterworks but also for conceiving new monuments to indoor-outdoor living.” Today, the firm’s preservation work expands far beyond the Kaufmann House, and includes a Case Study House as well as other iconic homes designed by the great California modernists—Schindler and Lautner among them. Previews Inside Out recently spoke with Marmol about the delicate art of preserving such legendary architecture.

Previews Inside Out  What makes a home “legendary” in your mind?

Leo Marmol  I think of legendary homes as wonderful collaborations between a very creative, powerful architectural thinker and a very creative, powerful client. The Kaufmann House is a prime example of that legendry architect-client force. Mr. Kaufmann had previously commissioned Frank Lloyd Wright for his Fallingwater home in Pennsylvania, now a National Historic Landmark. Then he pushed Richard Neutra to achieve one of his best residential works in Palm Springs.  I think the term “legendary” speaks to the power of client collaboration in these homes.

Previews Inside Out  Who are some of your favorite design legends?

Leo Marmol I can’t name just one. We are greatly influenced by all of the California modernists… from Irving Gill (the pioneer of the modern architecture movement) all the way through the Los Angeles heyday of modern design.

Previews Inside Out Which of your contemporary projects pay homage to these design legends today?

Leo Marmol Our work in prefabricated systems is an offshoot of the modern dream in that we are trying to provide high quality design in the most efficient process. The Ward House in L.A.’s Rustic Canyon also very much expresses that modern desire to live one with nature and feel connected to the outdoors beyond our human-made walls.

Previews Inside Out Why do you think contemporary architects return to mid-century architecture repeatedly?

Leo Marmol I think there is something very beautiful in trying to create something more by using less. Today, we live in a world of excess and consumption. Modernism looks at shedding that excess and drilling down to core ideas about architecture. I think that is very sustainable and very soothing. The world is crazy and chaotic enough…the home should be something that sustains our lives and gives us an escape from that chaos. There is something fundamentally human about mid-century architecture.

Previews Inside Out What mid-century elements are your favorites?

Leo Marmol An expressive structure that allows us to open up and expand rooms into the garden. Materials that can live indoors and outdoors. Terrazzo floors that flow out to the outdoor terrace. In an Albert Frey home we restored, the swimming pool flows into the living room. Those kinds of creative gestures are playful, and therefore, human.

Previews Inside Out Can mid-century inspired architecture be luxury?

Leo Marmol Absolutely. I think that simple, elegant, well-proportioned and well-lit spaces are inherently luxurious. There is a sensuality and casualness to modern environments. We often think of them as uptight, but I think the opposite. You can fill a modern space with all of the junk of life and it will still feel beautiful. Look at Charles and Ray Eames. They filled the collections of their life in their house and it was beautifully sustained in a simple and modern envelope. Modern architecture will sustain your desire to be anyone and do anything you wish. It’s a neutral box that gives you the freedom to fill it with yourself.

Previews Inside Out And just for our guilty pleasure…did you ever meet Julius Shulman?  He was a legend in his own right, wasn’t he?

Leo Marmol Yes. Many times. He was a great inspiration, resource, colleague and friend. His photographs were very instrumental to the preservation process of the Kaufmann House, and he was very supportive of our work. Of course, there was the straight documentation aspect of his photography, but more importantly, he captured the spirit of a design attitude. He constructed our view of modern design to this day. Prior to his photographs of the Kaufmann House, high design was only available to a select few. He made it available to everyone through his images. I think that is what great artists do. They open up a world that didn’t exist before.

Marmol Radziner is an architectural firm founded in 1989 by Leo Marmol and Ron Radziner. The firm has earned numerous accolades for its work, beginning in 2004 when it was honored as the AIA California Council’s Firm of the Year. They have subsequently been honored as members of the Architectural Digest AD 100 and as inductees of the Interior Design 25th Anniversary Hall of Fame in 2009. More information on the firm can be found here.