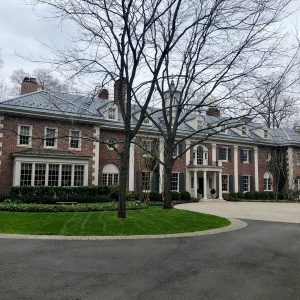 Merrywood, the childhood home of Jacqueline Kennedy Onassis in McLean, Virginia, has sold for a record price — earning a place among the most significant sales in the D.C. Metro area in over a decade. Monica Boyd, a Coldwell Banker Global Luxury® Property Specialist based in Georgetown, represented the buyer in the transfer of ownership of the storied 1919 Georgian-style mansion . It was listed for $49.5 million — one of the Washington D.C. Metro area’s most expensive homes.

Set on the banks of the Potomac River, the residence exudes a stately sense of elegance that is consistent with the former First Lady herself. Graceful appointments echo the time period in which it was built, including formal dining and sitting rooms, plaster moldings and ornate chandeliers. The 23,000-square foot mansion is a private haven, resting on a gated and fenced seven acres. In all, there are nine bedrooms and 11-and-a-half bathrooms, including a master suite with two separate dressing rooms, a private study, fireplace and a gym. The grounds are equally alluring with a tennis court, outdoor and indoor swimming pools and fitness center, as well as a separate carriage house for vehicle parking. Other modern-day conveniences include elevator access on all four floors of the home.

“The elegance and timeless appeal of Merrywood, along with its legacy, are an important piece of the historic cloth that makes up our country,” said Boyd. “I am honored to be part of this sale, and to aid in the next chapter of this notable estate — which is truly a show piece for our local region.”