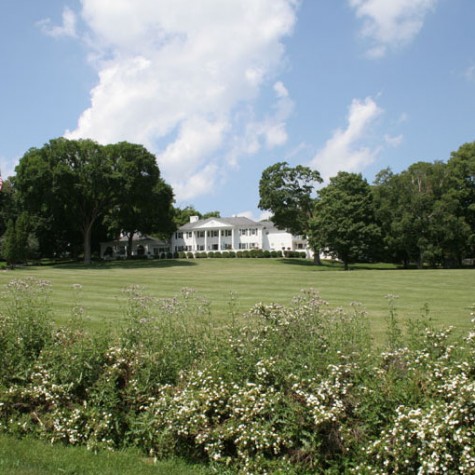 Lake Minnetonka has been home to some of Minnesota’s most storied estates and summer homes. Families such as the Pillsburys, the Daytons and the Bells—names that harken back to a bygone era—put their stamp on the lakeside retreat (just eight miles west of Minneapolis) with their towering mansions and Victorians, as did a funky guest house by architect Frank Gehry. Tanager Hill, built in the early 1940s by Charles Bell (son of the founder of General Mills), was one such estate.  The 32-acre property recently entered the market for $22 million, hailed by the Star Tribune as “the second-most-expensive listing in the Twin Cities metro.”

Listed by Bonnie Velie of Coldwell Banker Burnet and marketed by Coldwell Banker Previews International®, Tanager Hill lives behind distinguished iron gates and shrouded by trees, almost perpetuating its intrigue to passers-by. The property itself is punctuated by a stately 13,000-square-foot white brick main house, a 3,500-square-foot guesthouse, a pool house, two caretaker houses, a barn and a guard house. “Wonderfully private and refined,” as Velie describes, the property has an immediate sense of elegance and formality due to traditional details such as wood paneling, crown molding and arched transoms. Yet in keeping with Lake Minnetonka’s heritage as a summer playground, it is also very livable with several casual living spaces.

“It is one of the most extraordinary and long admired estates on Lake Minnetonka,” said Velie. “And the commanding views and privacy will leave you breathless.”

Can you imagine the magical summer weekends on this estate?  Or better yet—who among the Midwest elite must have rested on its shores, sat in its lush gardens or sunned themselves at the pool during the Golden Years! If you could go back in time, where on Tanager Hill could you most likely be found?