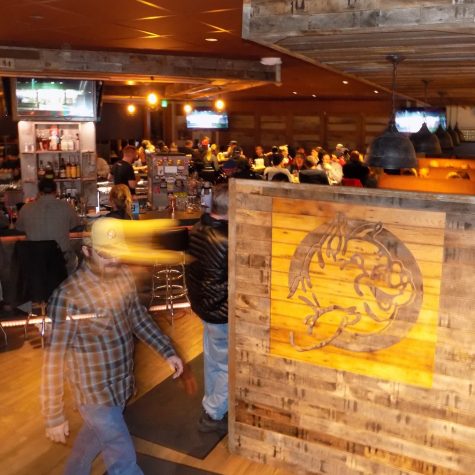 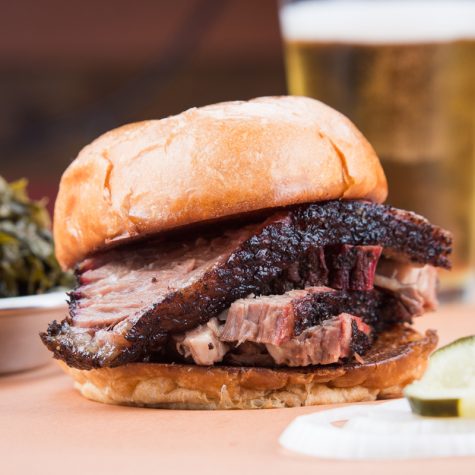 Aspen. It’s known as the winter playground of the Hollywood glitterati. A place where fur-coated divas descend from private jets and models and starlets cavort slope-side and many of the most famous faces in the world indulge not only in some of the best white-powdered ski runs around, but also in a growing list of renowned, white-table-clothed restaurants. Aspen has begun to be known almost as much for its food as for its slopes, and leading the charge is high-end French-American bistro Cache Cache. While founder/chef Chris Lanter continues to put out some of the tastiest food in the area, he’s also injecting a fresh, new flavor into the city with his second restaurant, Home Team BBQ. 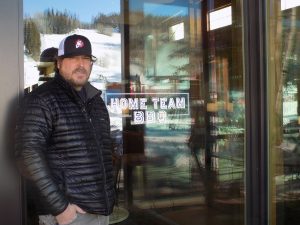 Yes, the renowned chef, a product of years perfecting elegant French cuisine in distinguished restaurants throughout France prior to opening Cache Cache, is now a purveyor of pork butt—and proud of it. “It was time,” Lanter said of bringing the Charleston, SC-based barbecue joint to Aspen, with a new full-service restaurant at the Inn at Aspen at the base of Buttermilk Mountain. And not just because this burgeoning foodie destination was lacking in barbecue fare, but also because the opening of the restaurant also fostered a long-overdue kitchen reunion—and a longtime dream—shared between Lanter and his former sous chef/college roommate Aaron Siegel, the owner and pitmaster of Home Team BBQ. 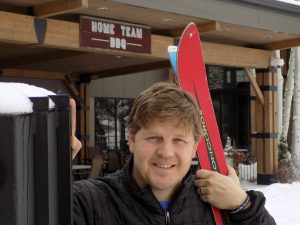 “It was a no-brainer for us,” said Siegel, a Culinary Institute of America graduate.

“We worked together previously at Cache Cache, and we’re like family. We have the same goals, the same way of doing things in terms of respecting the food and our team, and we love what we do.”

They also love Aspen and have a keen insight into the local restaurant industry that has helped them stay the course, even under challenging circumstances. Home Team BBQ Aspen made its auspicious debut on December 10, having received the final signoff to cook under the hood instead of just using the smokers the night before. “We cooked all night long, opened at 11am, ran service all day, went to bed early Sunday morning, got up and did it again and again,” said Lanter. “We closed Tuesday and opened back up Wednesday with breakfast, lunch, and dinner. It was crazy, but December 10 was always our date because that’s when the mountain opened. We were determined to get it done and get open, and everyone pulled together to make it happen.” 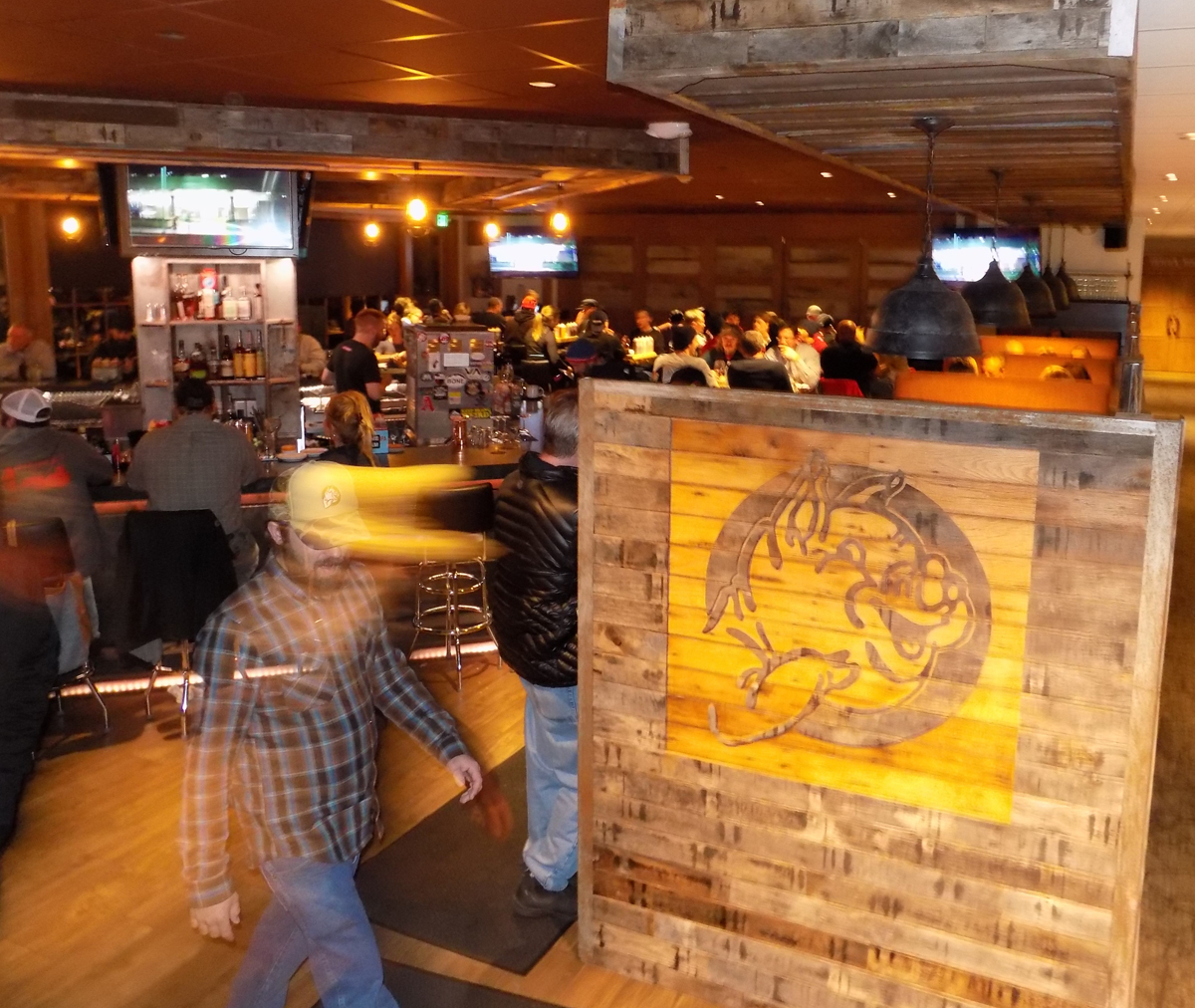 The shortened timeline the team faced after being delayed by typical restaurant issues like lease negotiations and site approvals meant zero promotion to support the opening. Not that it mattered. The restaurant was as busy as Aspen’s Black Diamond Runs almost immediately. Locals came. So did patrons and coworkers (past and present) of Cache Cache. And so did Kourtney Kardashian and Jimmie Johnson and Cheryl Hines and Kevin Hart (multiple times). “Everybody likes good barbeque—rich, not so rich, local, visitors. It’s universal,” said Lanter.

Plenty of fanfare will come courtesy of ESPN during the X Games January 26–29, which set up right outside Home Team BBQ (You can see the half pipe used for events from the restaurant.). Before the onslaught of hungry snowboarders arrives, Lanter and Siegel talked to us about what this new restaurant means for Aspen’s dining scene, how they are already connecting with locals and visitors, and what we can expect from the menu.

Chris, you’re known for fine dining, and Cache Cache is one of the most popular restaurants in Aspen. What’s it like switching gears from escargot to pulled pork?

I’m classically French trained, so I was over at Cache Cache serving royal caviar and shaving truffles, and now I’m over here at Home Team at 5am firing up the smoker for brisket! I never saw a smoker in France, so it’s been a really good time and an intellectually stimulating experience just learning a new craft and a different way of doing things.

Aspen has a reputation for fine dining. How does BBQ fit into that picture?

Who doesn’t love barbecue? Especially when it’s really good barbecue. The food is No. 1 and the concept is proven with the success of the three Home Team BBQs in Charleston. Plus, it’s an idea we really believe in.

Were you concerned at all about bringing more casual fare to this market, especially in light of the high-end expectations associated both with the area and with Cache Cache?

Not from my perspective. At the end of the day, it’s all about the food. They’re two completely different menus that are on the opposite ends of the culinary spectrum and have different price points, so they don’t compete with one another. We’ve had lots of Cache Cache customers come in and tell us how much they love it. Barbecue inherently attracts customers, and Home Team is unpretentious and chef-driven, so the focus will always be on serving delicious food.

Also, for a city to become a real food destination, which Aspen has been doing, it needs to have variety, but variety that is high quality. 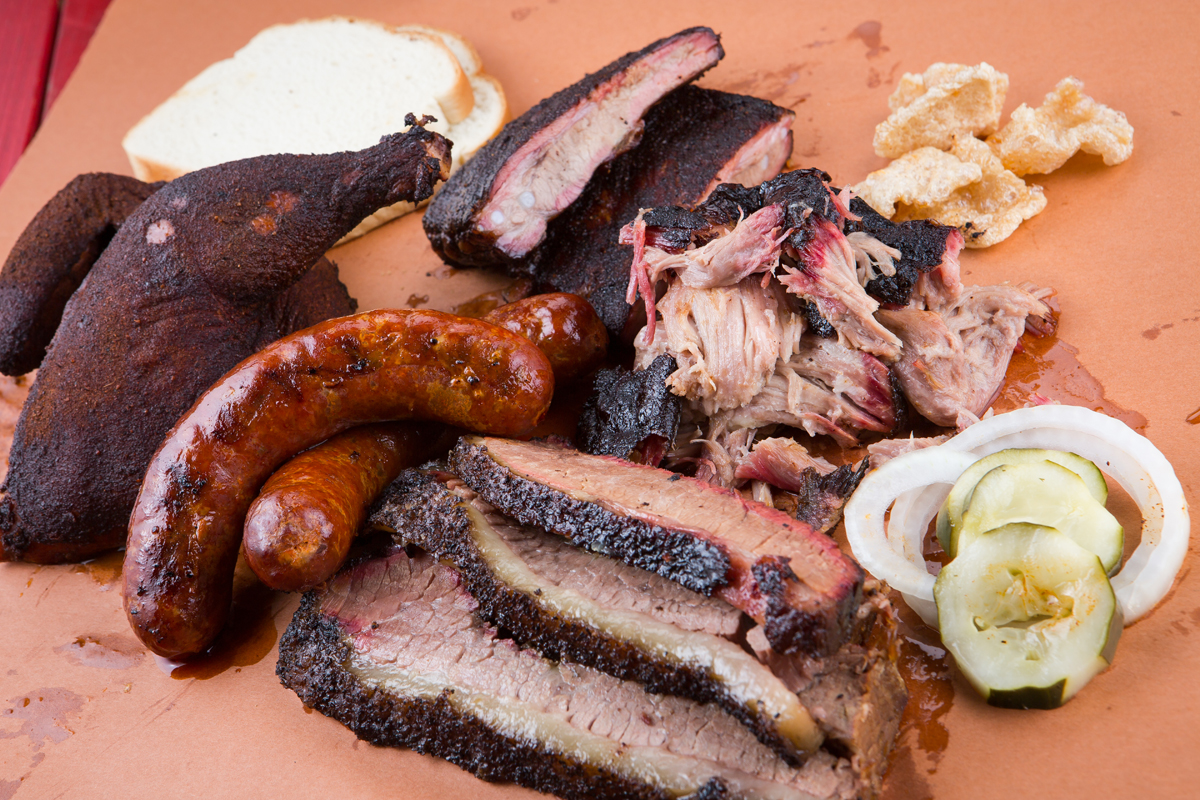 Is Home Team the type of restaurant that’s missing on the Aspen food landscape?

How do you both plan on splitting your time between Home Team BBQ Aspen and your other restaurants—Chris at Cache Cache and Aaron in Charleston.

I’ll be on a plane a lot and leaning on the great teams both in Charleston and here, with Taylor Garrigan, one of our executives, providing great input into the food and cooking techniques. He won a barbecue competition on the TV show “Chopped,” so he’s obviously an excellent resource.

I’ve been asked if there will be someone stepping up to take on some of the responsibility at Cache Cache, but, the truth is, Nate King, my chef de cuisine, stepped up years ago and has been knocking it out of the park. I’ll be spending a few less days per week at Cache Cache, and Nate will be doing what he’s been doing—leading the kitchen, coming up with specials, and generally being a superstar. Without Nate’s expertise in the kitchen and without the support of my partner, Jodi Larner, this wouldn’t be possible. 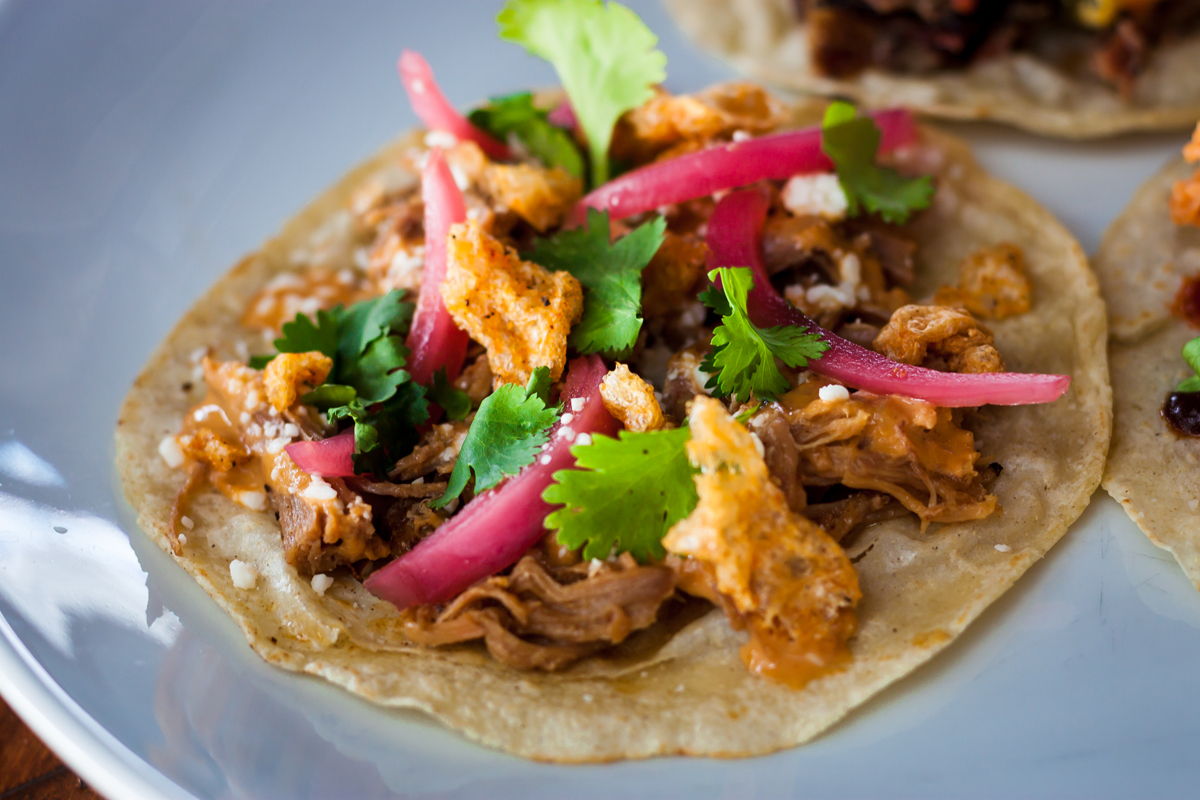 How was the location chosen? Did you purposely look for something that was just outside Aspen?

Our idea from the beginning was to make it a destination restaurant. We’re two miles from Aspen, and I like that it’s right outside of town. Aspen during peak season is so congested. It’s easier to reach us from a location standpoint, and we have a built-in audience with three employee housing subdivisions within three miles of us and a local base that’s larger than it ever has been.

Do you expect the clientele moving forward to be a mix of tourists and locals?

Aspen is a seasonal town, so any restaurant has to depend on locals in the off-season. People will find you if the food is good.

The Aspen location is similar to Home Team’s Sullivan’s Island location in Charleston. It attracts a fair amount of tourists because of the setting, but we know we have to appeal to the locals first, because that’s our base.

How has the response been so far?

Overwhelming. It’s been way busier than we could have imagined, right off the bat. I walked in four days after we opened and we had people who had already been in the restaurant two and three times. Seeing the same faces over and over is great. 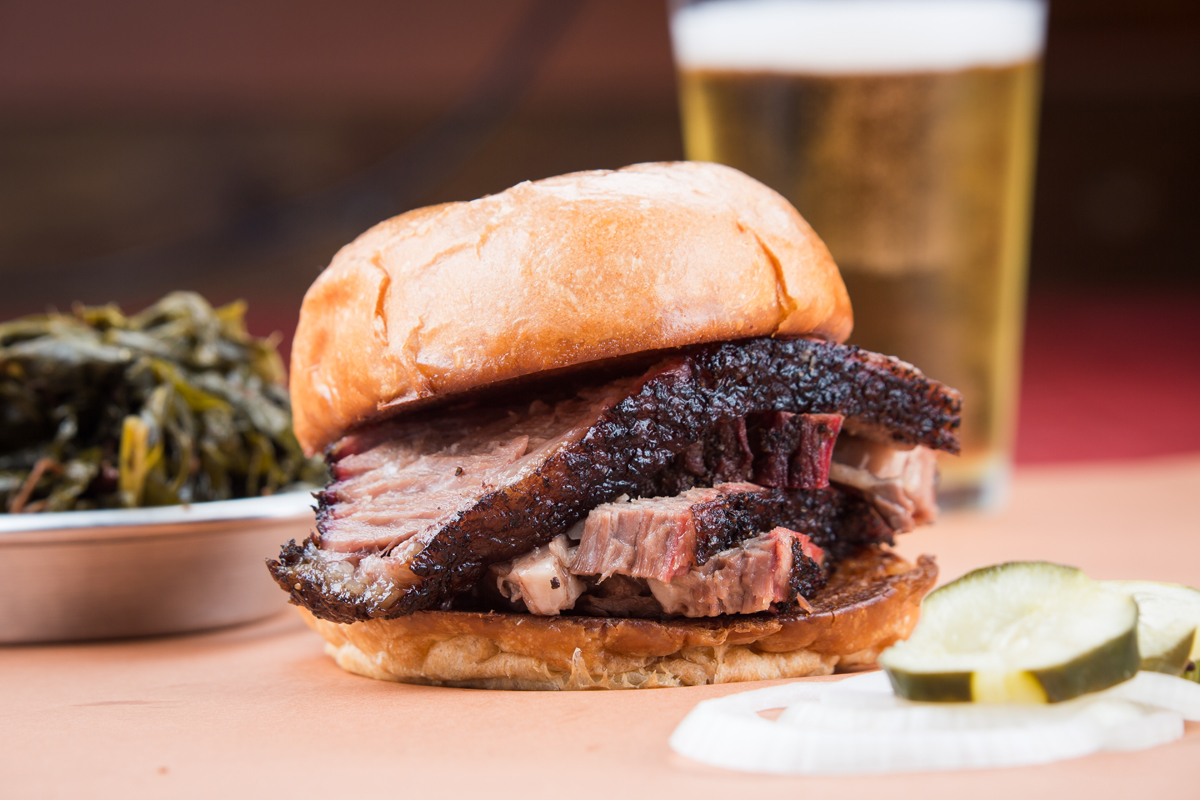 You have said that the menu today mirrors that of the downtown Charleston location. Will it remain that way, or are there some surprises in store down the line?

For now, it’s pretty similar to the downtown Charleston restaurant. Eventually, when we start doing specials, I’ll be able to put my twist on it.

Inside the Newest Addition to the Aspen Food Scene

Inside the Newest Addition to the Aspen Food Scene