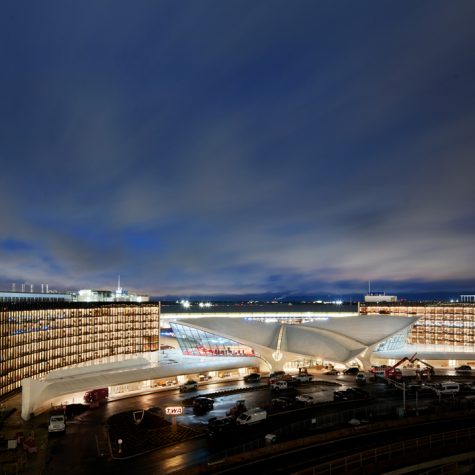 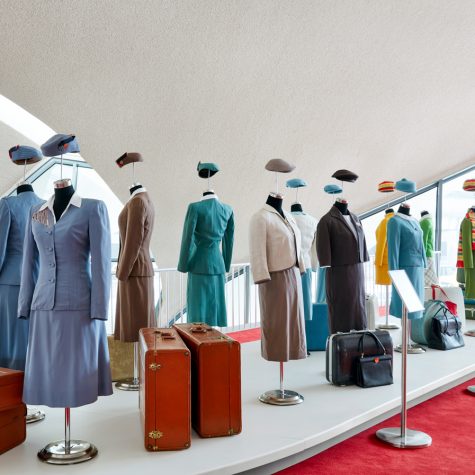 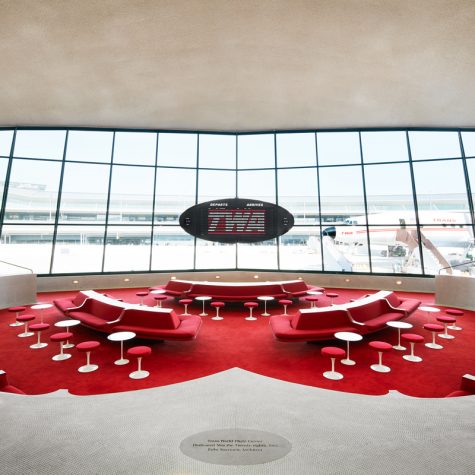 The magic of the Jet Age has returned to New York’s John F. Kennedy International Airport. After 18 years of being mostly hidden from public view, the 512-room TWA Hotel has opened to great fanfare — exciting architecture and mid-century modern enthusiasts in what has been hailed “the hospitality and aviation moment of the year” and a “time traveler’s dream.” 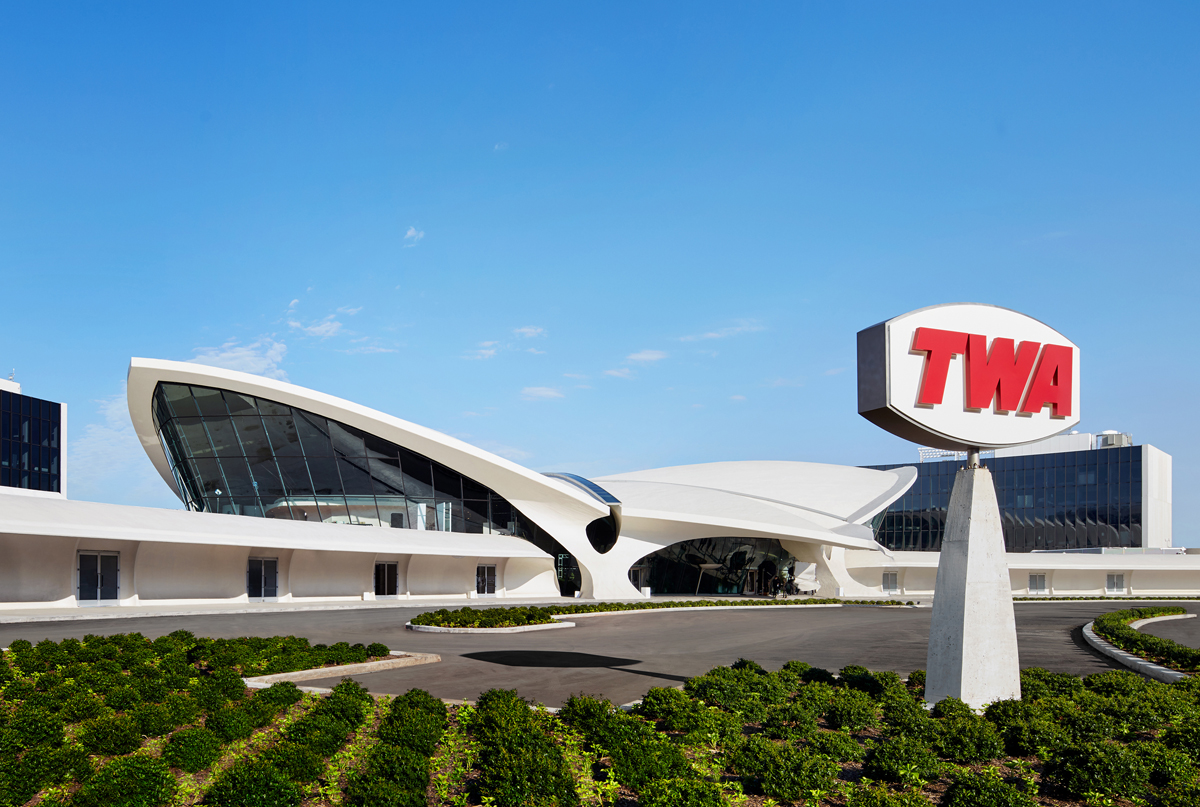 The new hotel is the result of a meticulous restoration of Eero Saarinen’s landmark 1962 former airport terminal by MCR and MORSE Development.  When the TWA terminal first opened, it epitomized the glamour and optimism of the Jet Age. The structure was designated a New York City landmark in 1994 and, after its 2001 closure, was listed on the National and New York State Registers of Historic Places in 2005. Restoring the beloved building (a project led by Beyer Blinder Belle Architects & Planners), constructing two brand new hotel wings behind it (designed by LUBRANO CIAVARRA Architects with interior design by Stonehill Taylor) and building a 50,000-square-foot events center (by INC Architecture & Design) was a massive endeavor. The project involved 22 government agencies and more than 170 firms. Turner Construction Company began work in the fall of 2016, with roughly 450 union tradespeople on site every day. In addition, dining, retail and amenity partners helped give the space new life. 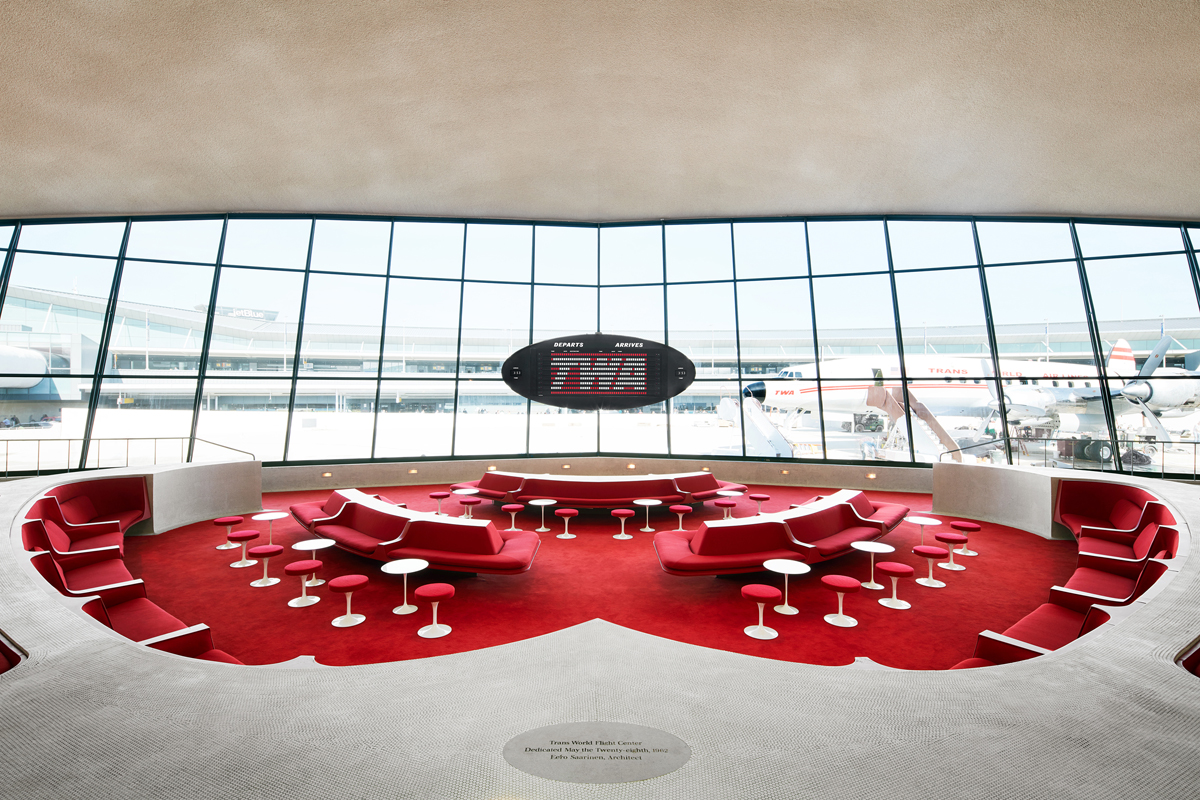 “Eero Saarinen’s cathedral to aviation has always looked toward the future,” says Tyler Morse, CEO and Managing Partner of MCR and MORSE Development. “We restored and reimagined his landmark with the same care that he devoted to his design.”

No detail went overlooked in the ambitious reimagining of the hotel. From the millwork by Amish artisans and the authentic split-flap departures boards made by Italy’s Solari di Udine to the custom font inspired by Saarinen’s own sketches and the one-of-a-kind manhole covers, the new hotel is a striking homage to an architectural icon. Built into the original penny-tile ticket counters is a digital kiosk for self-check in, with front desk staff dressed in period uniforms designed by Stan Herman. A 60-year-old plane, the Lockheed Constellation “Connie” L-1649A, has been transformed into a cool cocktail lounge decked out in plush red flooring, restored windows and 1930s controls in the cockpit. Authentic mid-century style furnishings, like Saarinen tulip chairs and Herman Miller Eames lounge chairs and ottomans, give you the feeling that you’ve stepped back into the 1960s. 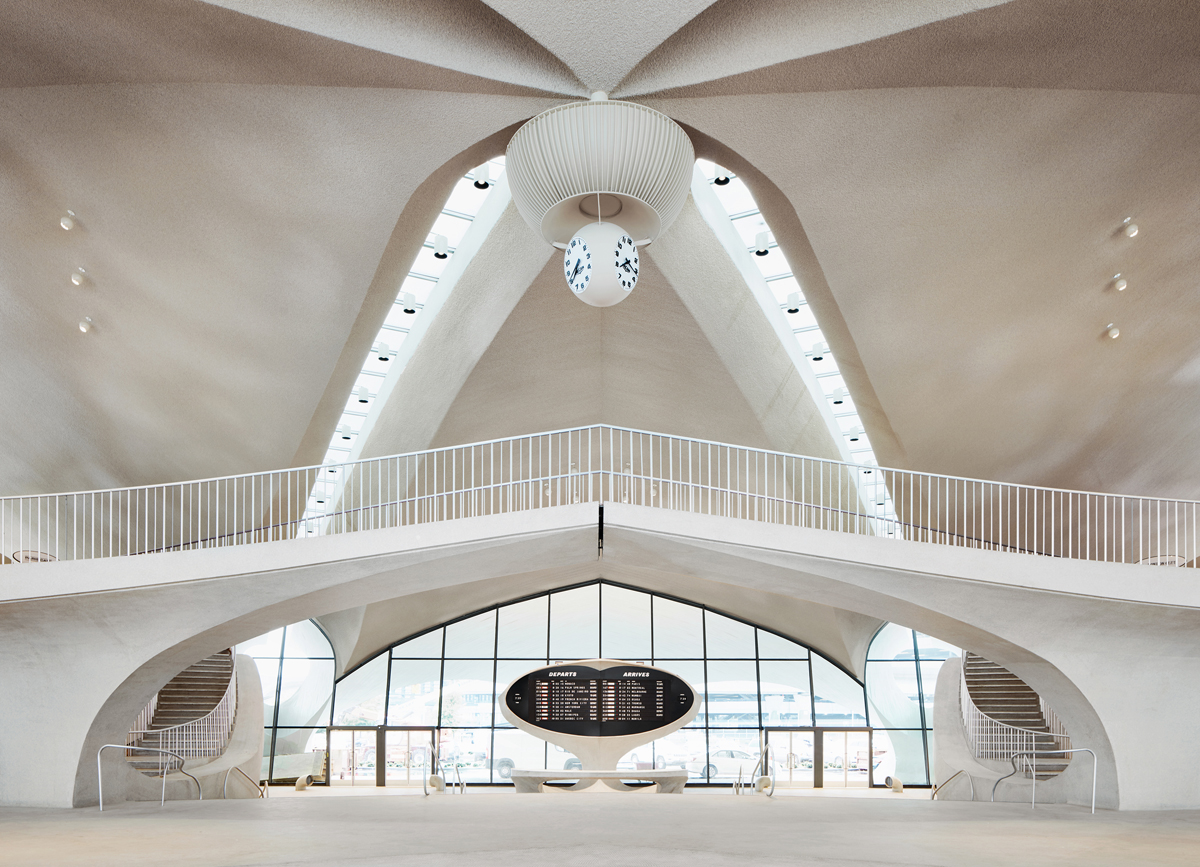 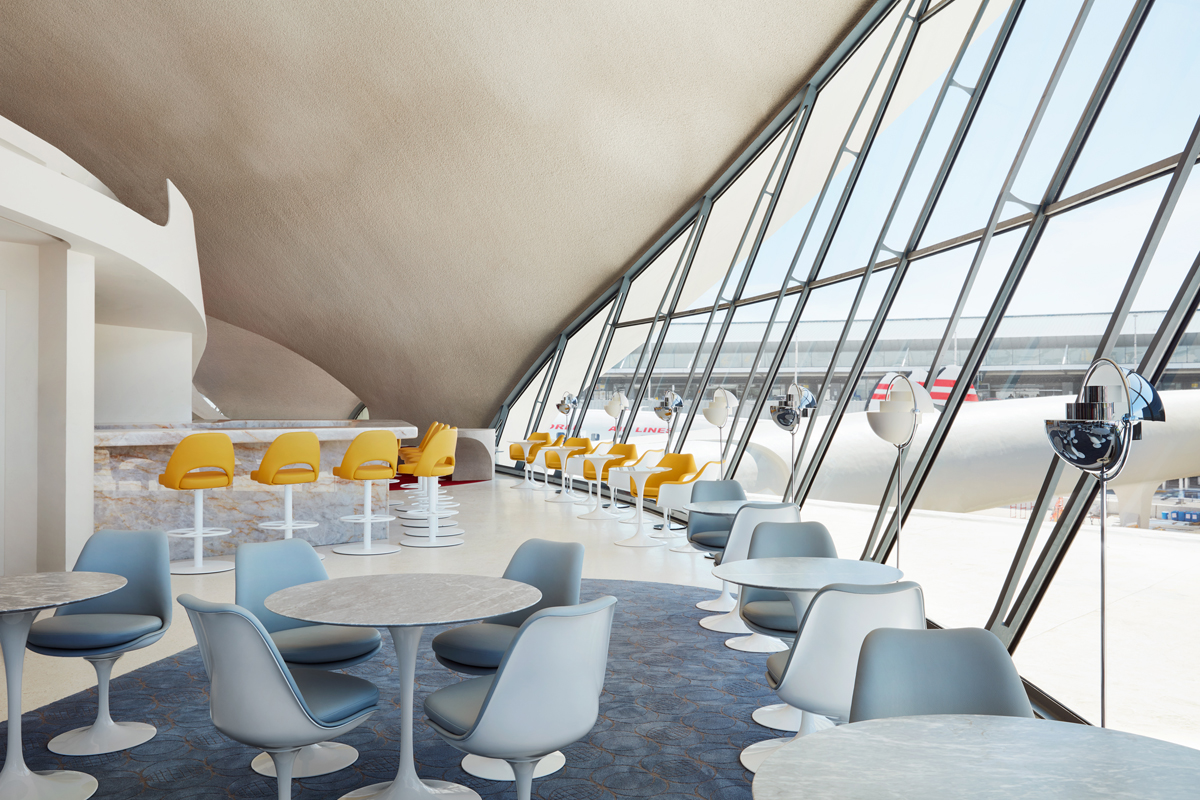 Even with all of the authentic period details, the design and development team managed to seamlessly bridge the gap between old and new.  For example, the mid-century modern inspired rooms, housed in brand-new buildings behind the landmark terminal, have all of today’s expected accouterments: large flatscreen TVs, plenty of power outlets and button-operated window drapes. Rooms either look out onto the Terminal 5 runway or into the hotel itself. If you’re worried about jet noise, you need not: a soundproof glass curtain wall measuring seven panes and five-and-half-inches thick by Fabbrica LLC allows guests to watch planes take off without hearing them. 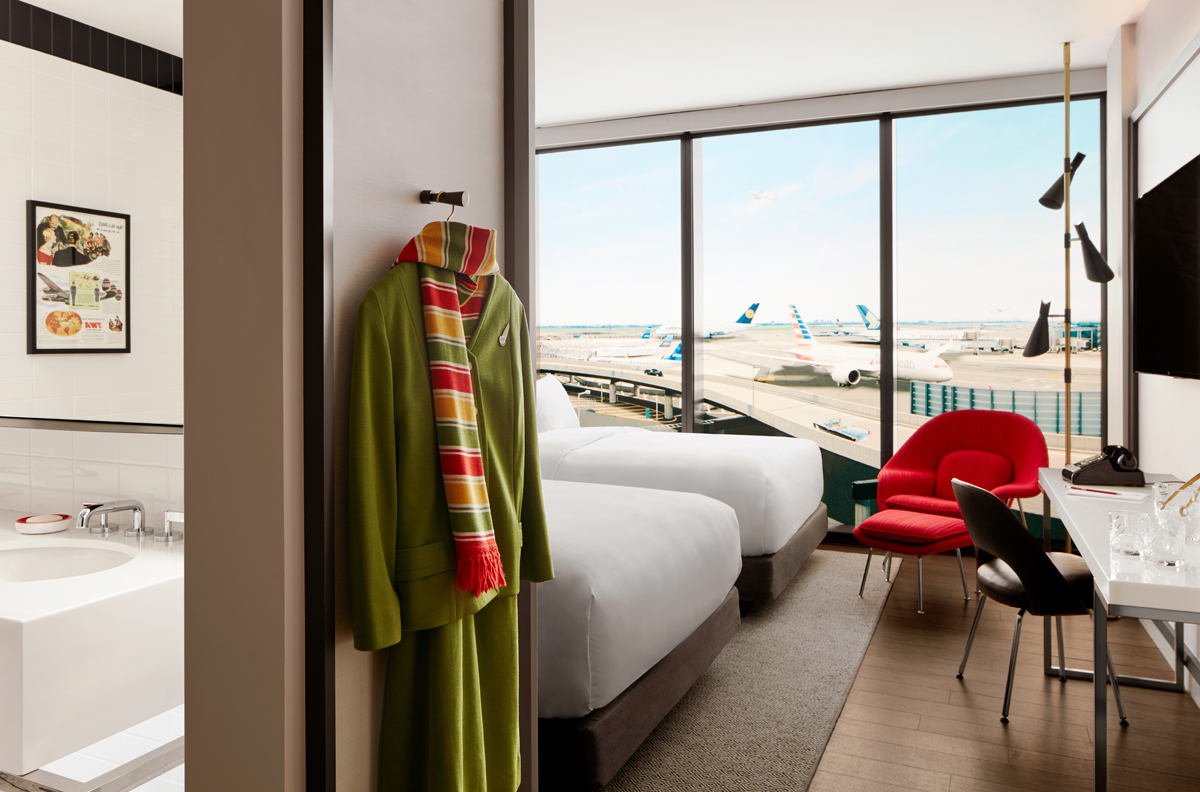 Beyond the rooms, the TWA Hotel is a destination in its own right with plenty of “wow” moments to satisfy even those who are not staying at the hotel. There is the eye-catching 200-seat Paris Café by Jean-Georges, which serves breakfast, lunch and dinner from an open kitchen in collaboration with Tastes on the Fly.  Other attractions include two cocktail lounges operated by the Gerber Group, numerous grab-and-go dining options, a coffeebar, 50,000 square feet of event space, a 10,000-square-foot fitness center operated by The Wright Fit and a rooftop infinity pool and observation deck with views of runway 4 Left/22 Right, plus a pool bar. 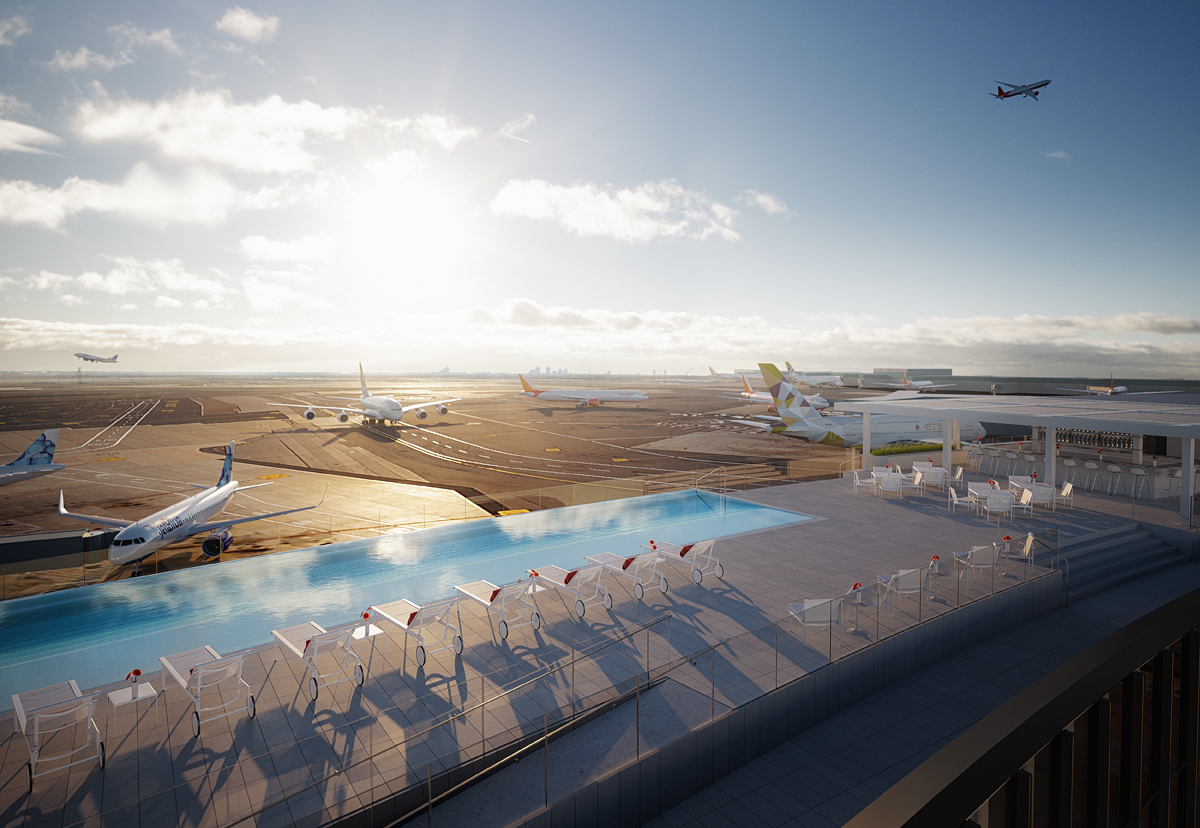 Collectors and shoppers might enjoy perusing the Shinola custom watch bar and leather goods store, a Warby Parker Pencil Room (where they can use pencils emblazoned with pithy one-liners to fill out custom postcards), a Phaidon + Herman Miller Reading Room and the TWA Shop (which sells apparel and gear honoring Trans World Airlines’ legacy).  True history buffs will also find inspiration, thanks to museum exhibitions on TWA, the Jet Age and midcentury modern design curated by the New-York Historical Society. 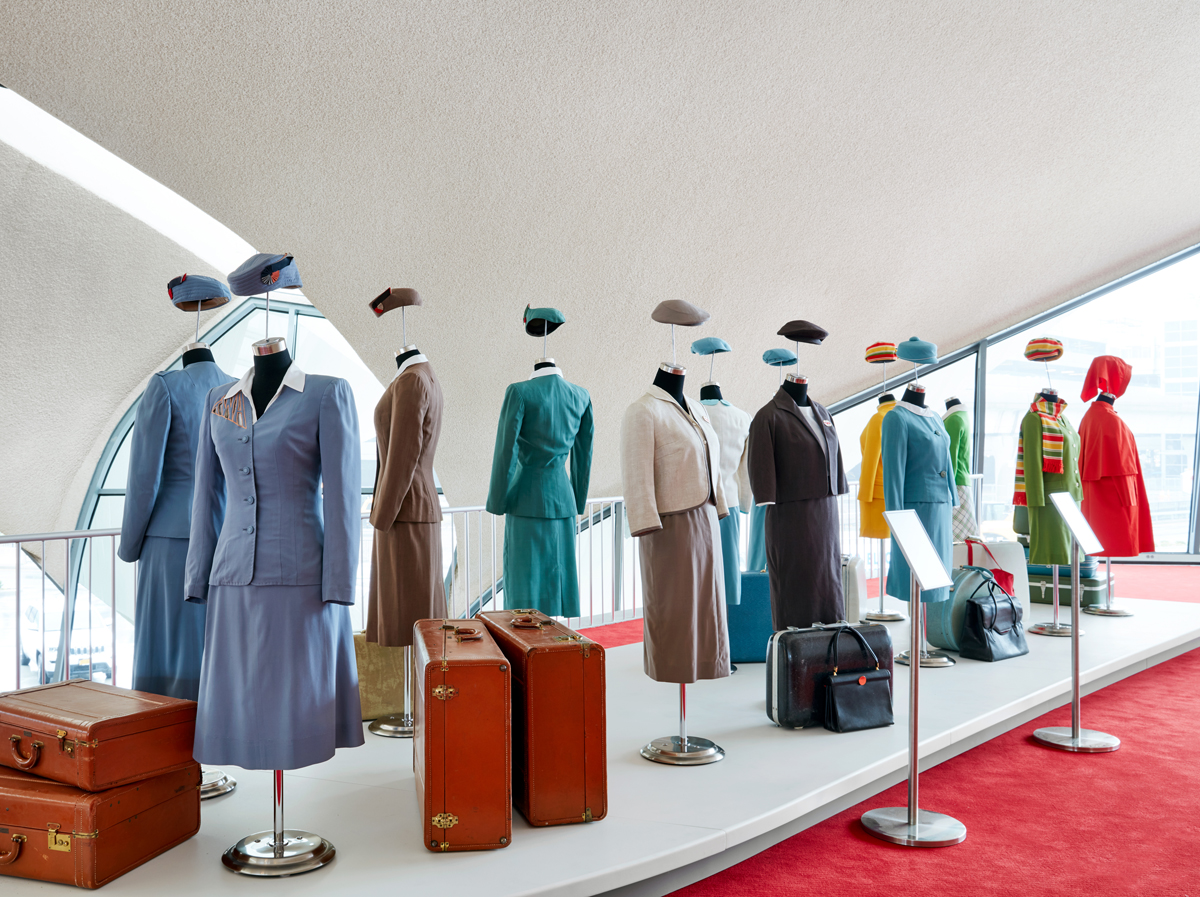 Guests may enjoy BLADE helicopter service to Manhattan, and if they need to catch a flight? They can always take the iconic tubes featured in the 2002 film, “Catch Me If You Can,” which connect to JetBlue’s Terminal 5. 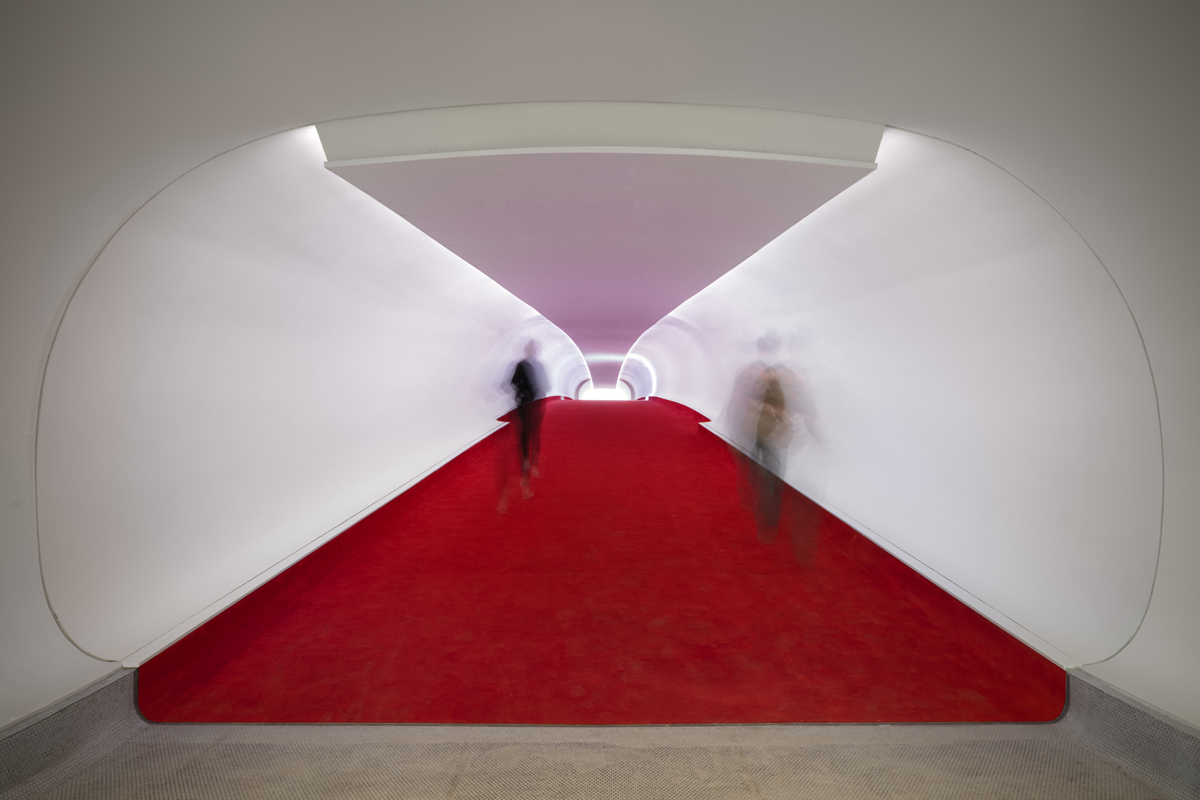 Inside the New TWA Hotel

Inside the New TWA Hotel