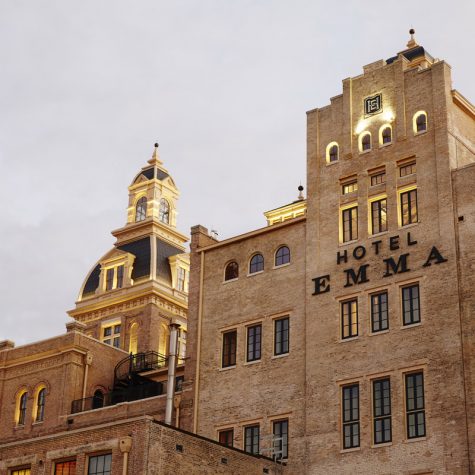 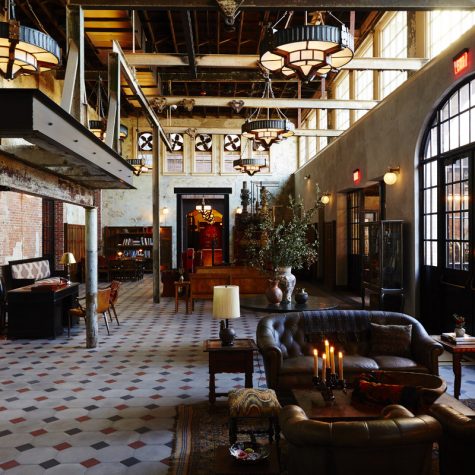 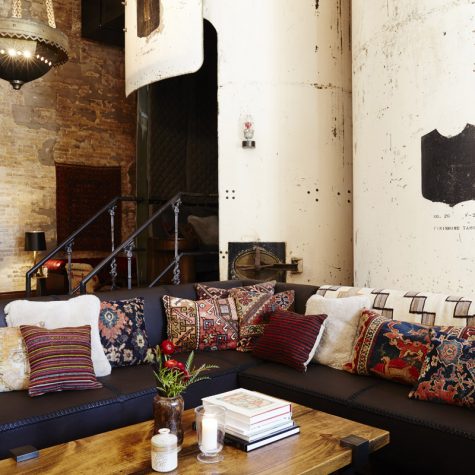 When you think of the world’s best hotels, you undoubtedly think London. Paris. Tuscany. San Antonio.

San Antonio? If you just raised an eyebrow, it’s safe to say you haven’t visited the city’s Hotel Emma yet. The 146-room hotel in San Antonio’s historic Pearl District made the list of the 50 Best Hotels in the World as voted by the readers of CN Traveler. So what did it take for a hotel in the heart of San Antonio to be recognized alongside the Mandarin Oriental in Tokyo, the Alvear Palace Hotel in Buenos Aires, and the Sant Francesc Hotel Singular in Mallorca, Spain? 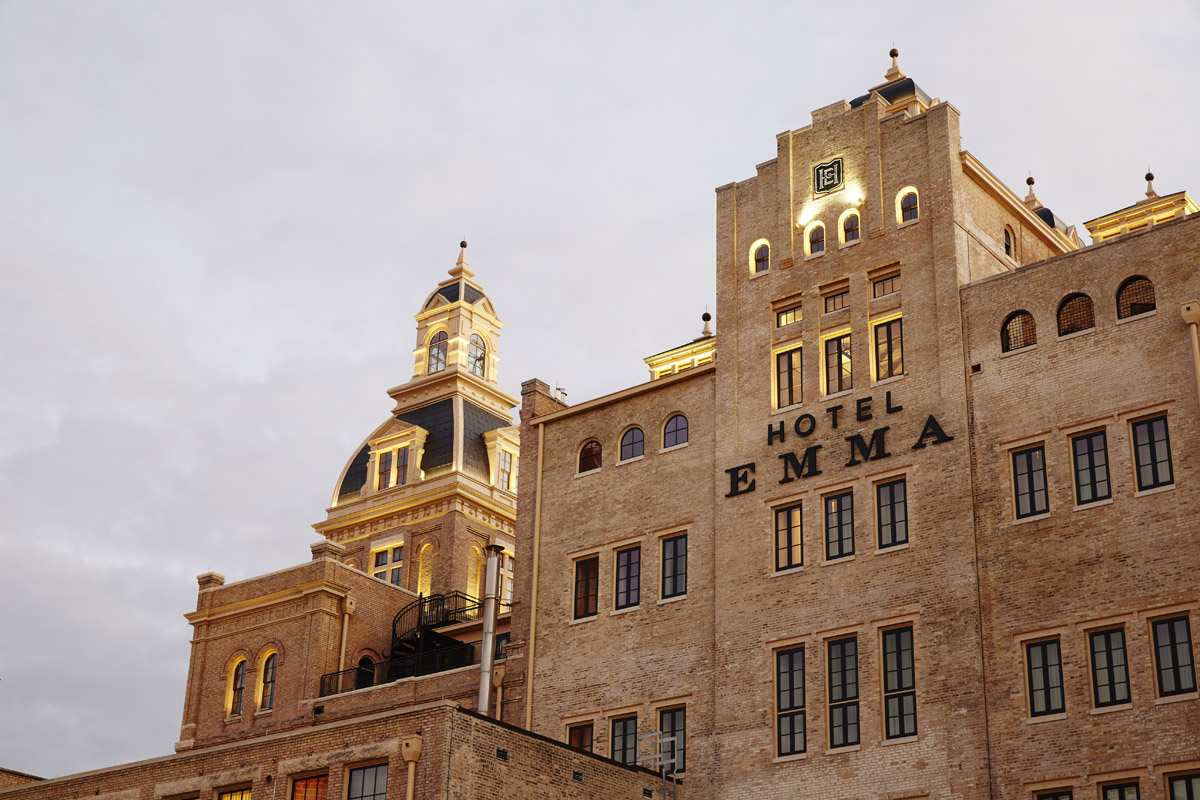 A whole lot of history, for one thing. One hundred-and-twenty-two years’ worth, actually. That’s how long the landmark Second Empire structure designed by Chicago architect August Maritzen as Pearl’s Brewhouse has been standing. Today, it’s being called San Antonio’s first luxury destination hotel, proudly bearing the name of Emma Koehler, a pioneering woman who ran the brewery as its CEO for years after the death of her husband, founder Otto Koehler.

While Pearl’s Brewhouse was shuttered in 2001, the rich history of the site has hardly been purged; instead, it’s been woven purposefully and meticulously into the hotel’s design, “thoughtfully translating the authenticity of the Pearl and its story in every room and in every detail — from the most exalted chandelier to the smallest rivet,” says hotel spokesperson Beth Ticku Smith. 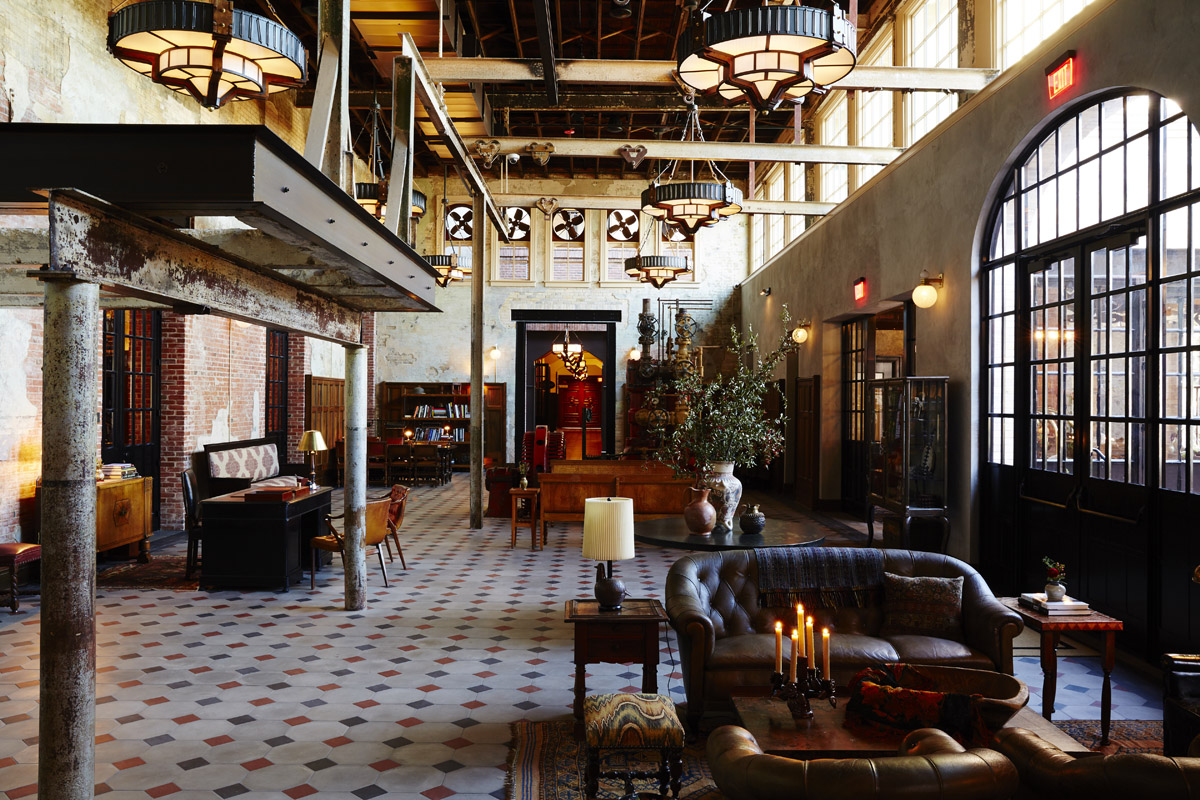 It was New York design team Roman and Williams who accepted the challenge of transforming the former 19th-century brewery, bringing modern luxe to a space that had more than a century of patina to work with. “The magic is in the mix,” firm principals Robin Standefer and Stephen Alesch told Architectural Digest. “This was a place where luxury met the primitive and untamable on the edge of the prairie, and we think it still holds that energy.”

Where a gilded table or sculpture might stand to greet visitors in the lobby of another upscale hotel, Hotel Emma instead boasts an immense, industrial mass of red metal. It’s an ammonia compressor that once produced refrigerant to chill the beer being brewed onsite, and, rather than remove or disguise it, Roman and Williams made it a centerpiece. 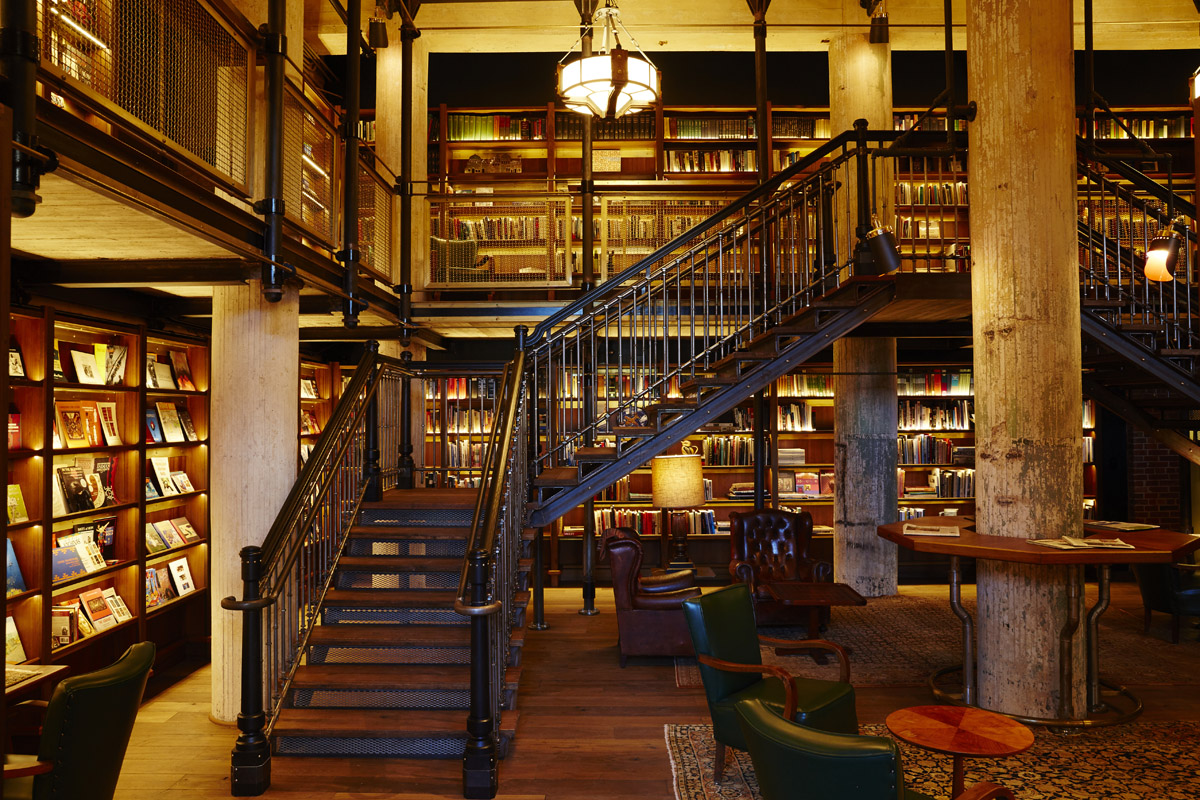 Elsewhere, thick concrete, heavy steel beams and exposed pipes mingle with custom-made, glass-blown chandeliers, recovered concrete floors, antique carpets and curated local artwork, with layers of chipped and peeling plaster and vintage exposed brick in the background. Everything may have been dusted off and preserved and reimagined, but it was deliberately not shined up, which makes it all the more dazzling. 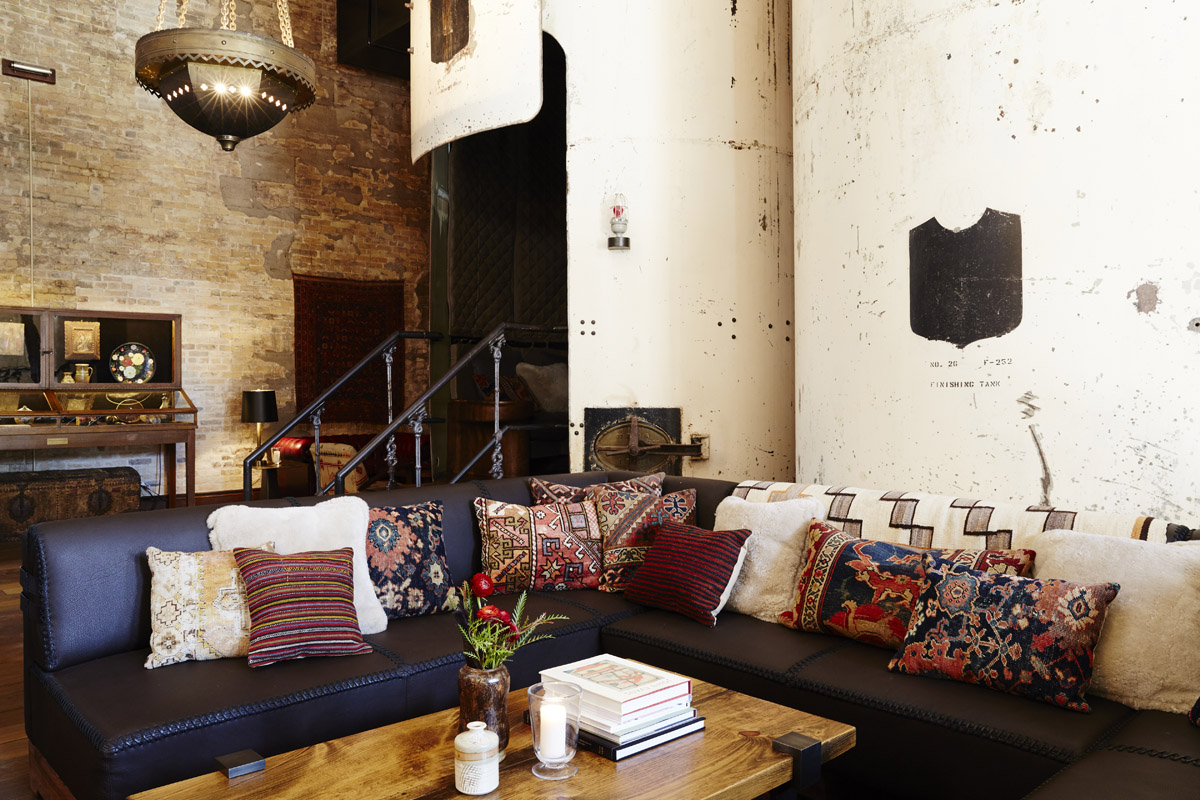 Furniture sourced from the 19th century is in line with the site’s heritage — like the cushy but timeworn leather armchairs in the hotel’s two-story library, where guests are invited to plunk down or choose from among the 3,700 books curated by San Antonio writer Sherry Kafka to bring back to their room. The combination of historic influence and design whimsy is even found in the courtyard, where original, salvaged tanks have been turned into bubbling water features.

Home to the Culinary Institute of America, a twice-weekly farmer’s market, and severable notable bars and restaurants, the Pearl District was becoming a food mecca before the arrival of Hotel Emma, and it’s clear Chef John Brand sought not just to bring more variety, but to elevate the typical hotel dining offerings with the introduction of his three in-house eateries.

“Inspired by the culture of San Antonio, Hotel Emma is a catalyst for changing the game in hotel food and beverage,” says Ticku Smith. “Emma is becoming one of the most significant hotels in the world and is playing a critical role in transforming San Antonio as a world-class culinary destination.”

Sternewirth at The Pearl, the hotel’s bar and clubroom, retains its former name, its industrial flavor and the spirit infused by former inhabitants; Sternewirth once served as a place for brewery workers to drink on shift. “Located in the great hall, with its soaring 25-foot-high vaulted ceilings, a large bar sits on a base inset with lively patterned concrete and is flanked by repurposed cast-iron tanks reimagined as intimate social spaces with curved banquette seating inside,” says Ticku Smith. 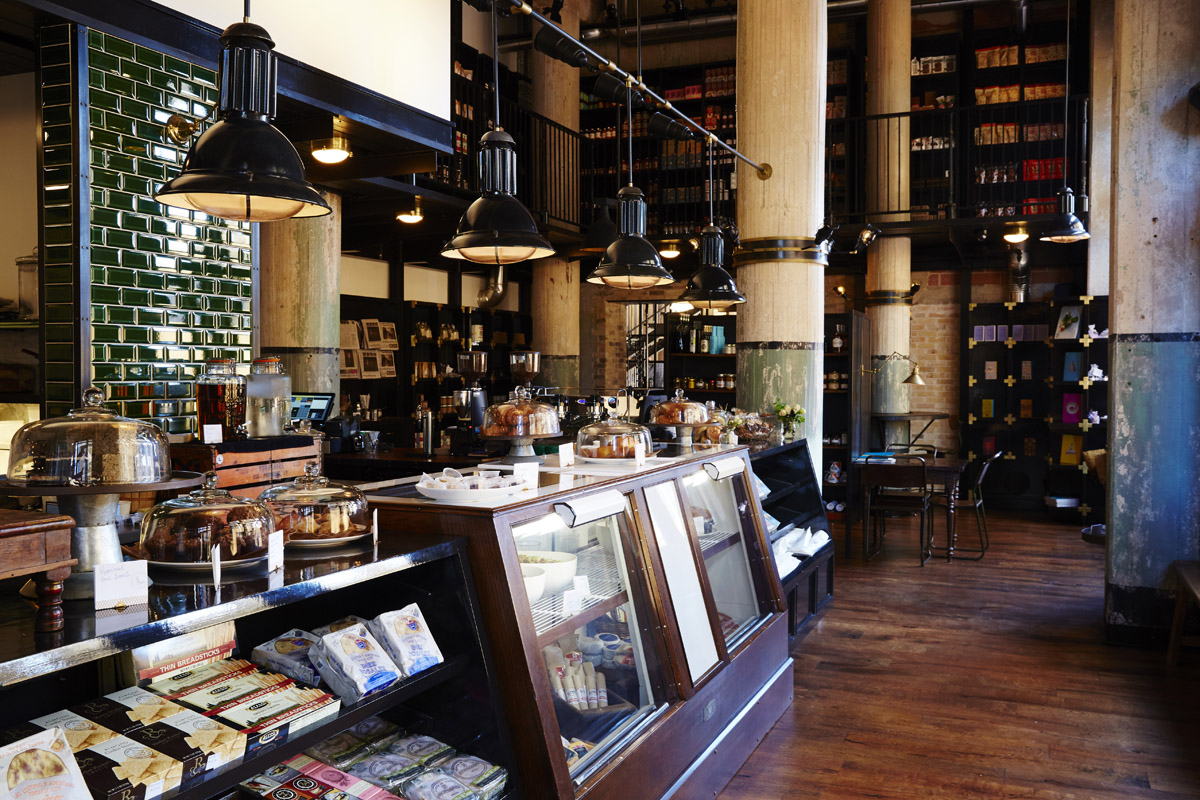 Supper is the hotel’s flagship restaurant, serving farm-to-table fare in a setting that Brand expressly designed to walk the line between upscale dining and comfortable atmosphere. The brewery’s former cellar is now Larder, a prepared-food market that they aptly describe as “a South Texas food store with a dash of Euro-sophistication.” 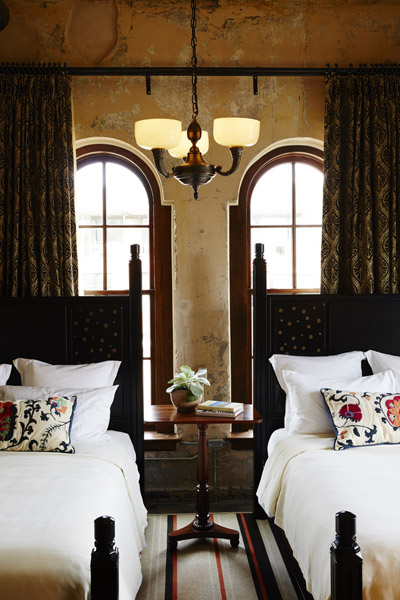 Roman and Williams’ influence in the guest rooms finds high ceilings and industrial details merged with black-lacquered four-poster beds dressed with white Frette linens, rustic wood and rich leather furnishings, and tiled bathrooms — some with clawfoot tubs and all with Malin + Goetz amenities.

The 2,361-square-foot Emma Koehler is “our version of a presidential suite,” says Ticku Smith. “The light-filled suite feels grand and intimate at the same time, with fireplace, grand piano and double-height floor-to-ceiling windows open to a sweeping river view. The second floor bedroom features vaulted ceilings, soaring views and a luxurious bathroom and dressing room with walk-in closet and clawfoot tub. The huge terrace features a private fireplace, dining table and sitting area, with enough space to accommodate a private party.” 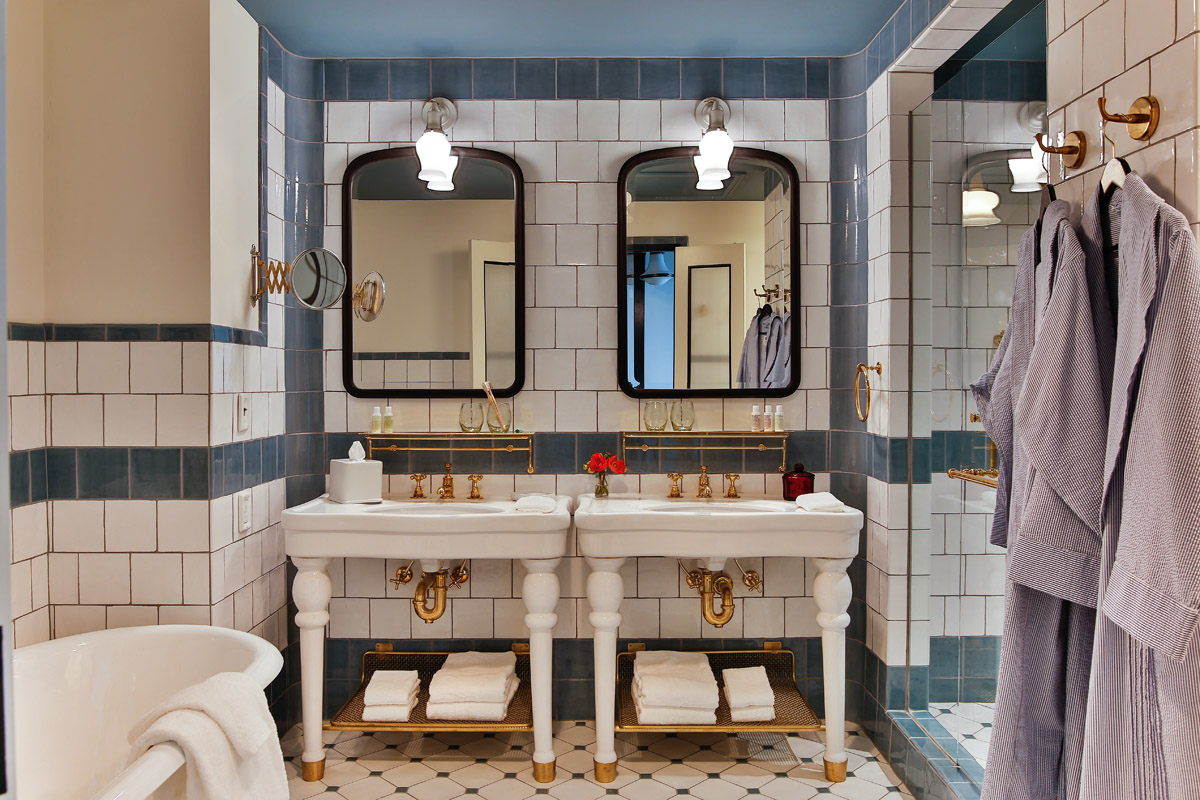 Today’s Pearl District is an expanse of chic shops and trendy restaurants. Hotel Emma might be the final piece of the Pearl puzzle, as the district has seen a staggering renaissance over the past several years.

Already a favorite tourist and real estate destination, both look to grow in further importance with the designation last year of the San Antonio Missions as a World Heritage Site — the first such site in Texas and only the 23rd in the United States. The hotel’s location along the River Walk, one of the most-visited tourist spots in the city, provides walkable access to the missions, as well as hot spots outside of the Pearl, like the Witte Museum and the San Antonio Zoo — providing great convenience for those who actually choose to leave the hotel. 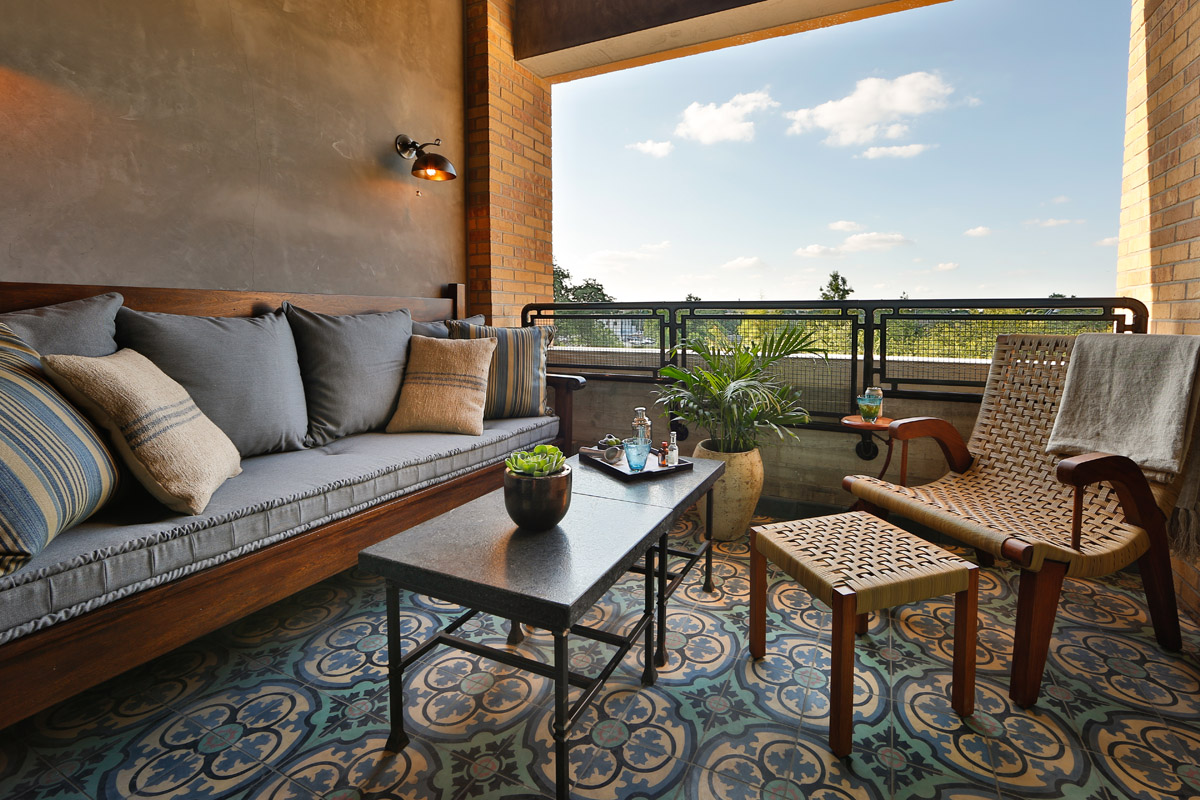 Inside Hotel Emma, One of the World’s Best Hotels

Inside Hotel Emma, One of the World’s Best Hotels 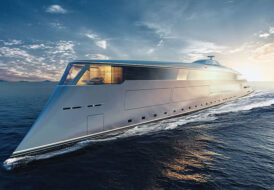 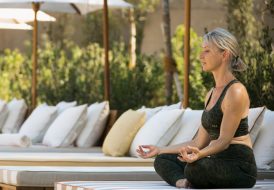