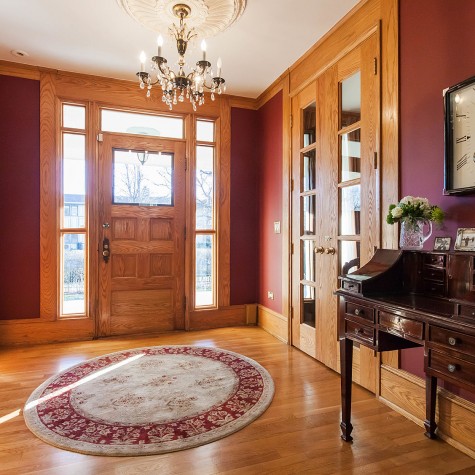 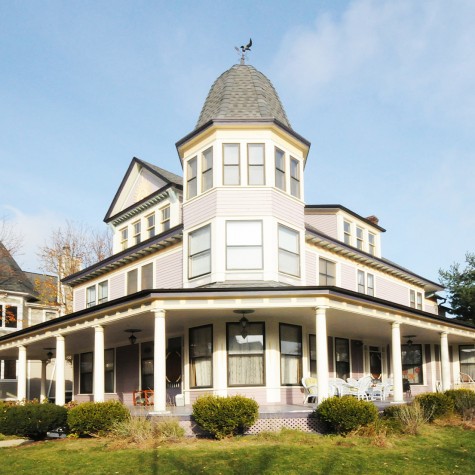 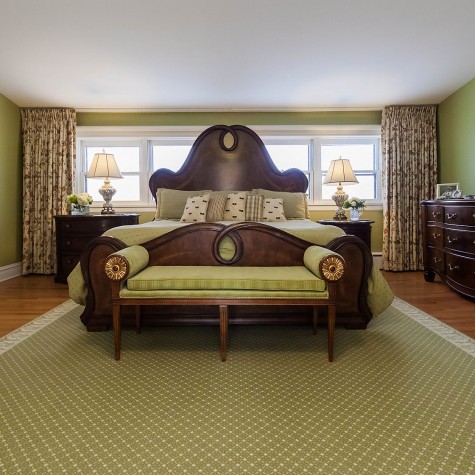 There’s something about a Queen Anne Victorian that makes us curious. The sculptural form. The decorative trim. The castle-like turrets. The bold and interesting color combinations. Who doesn’t stroll by and wonder what it looks like on the other side of that porch? Muse on what might have taken place inside — especially those houses with some historical significance behind them.

That’s certainly true of Chicago’s Abbott Mansion. Behind its striking purple, green, and yellow façade, the historic landmark holds 125 years of tales, and the latest chapter might contain the best story yet. Built by physician Abbott in 1891, the 17-room estate was the original home of Abbott Labs and has changed hands only four other times since. So inspiring is the design that it’s actually been cloned — an exact replica of the house was built on the company’s North Chicago campus. 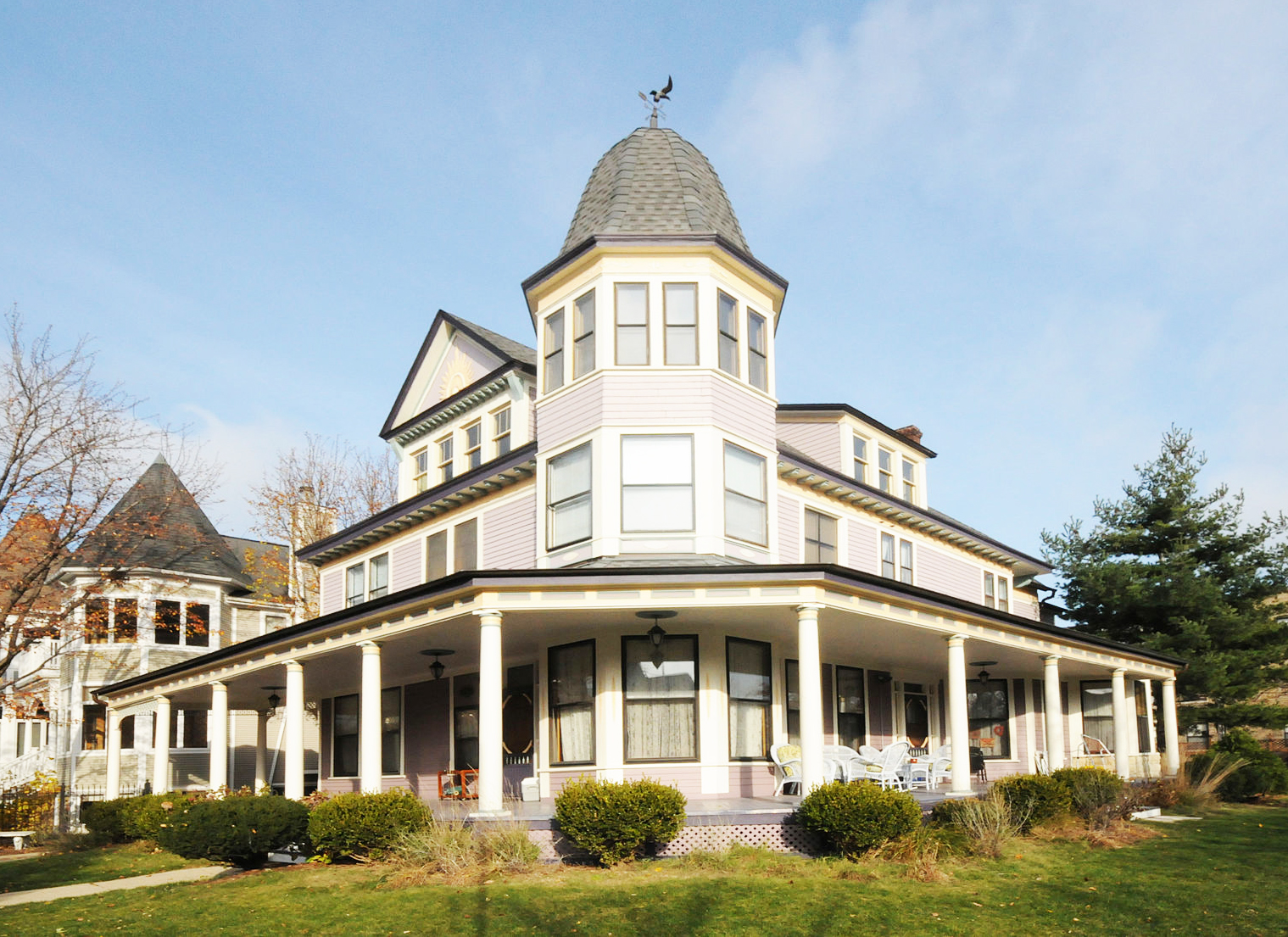 “This magnificent, historical Victorian mansion has been updated with modern enhancements focused on sustainability, offering suburban amenities in a fantastic city location,” says Julie Dorger of Coldwell Banker Residential Brokerage in Chicago, co-listing agent with Sara McCarthy. “With its character and significance as a Chicago landmark, we constantly hear from people who are excited to be able to finally see the inside of the house after having passed by for so many years.”

There is certainly a lot to see, with 7,000 square feet plus a separate, fully renovated two-bedroom coach house on a 92 by 165-foot site — five times the size of the typical Chicago city lot and one of the draws of living in Chicago’s Ravenswood neighborhood.

“We were looking in Ravenswood because we wanted to live in the city, but we wanted the amenities of the suburbs with a big yard and lots of space,” says the home’s current owner, Rob Craig, an executive in the energy sector. “This incredible house was on an oversized lot, in a sought-after neighborhood within walking distance to the Metra station and the L train, plus the shops and restaurants in Lincoln Square Ravenswood and the Lawrence Avenue corridor. We immediately had a vision for updating this beautiful old Victorian and making it more sustainable and energy efficient.” 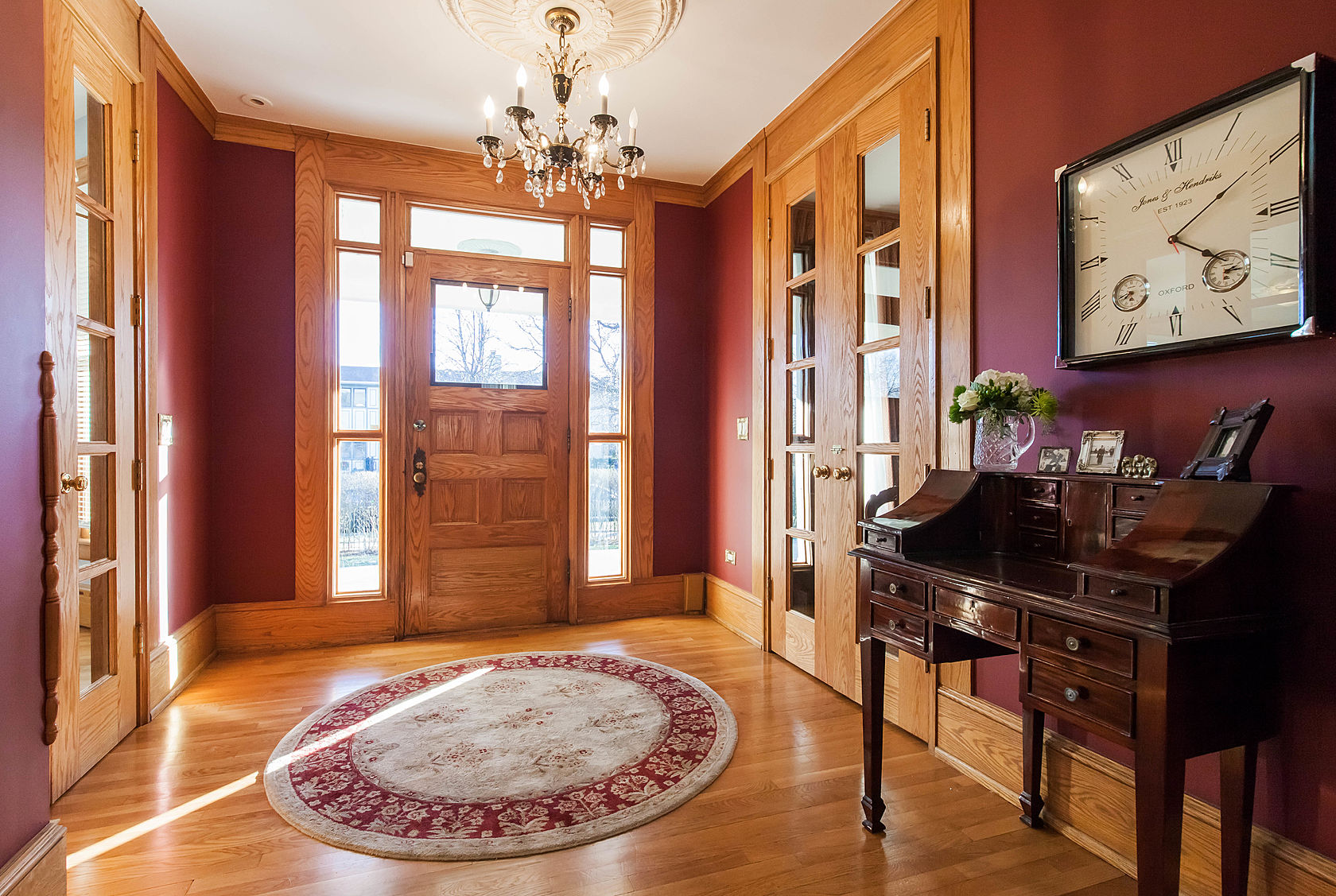 That meant installing a “new, high-efficiency hot water boiler and tank for heating, and new air conditioning systems — a SpacePak on the first and second floors and a ductless system with an energy recovery ventilator on the third floor where the master suite is located,” he says. “We also added insulation and installed a solar panel system on the garage.”

As a result, the home enjoys cost savings not typically associated with a home of this stature. But that was hardly the only impactful update. Craig, along with his wife Ashley, embarked on an extensive renovation of the mansion, leaving charming original details like the vintage millwork, lighting and stained glass windows intact, while focusing on making the property more livable for a family. 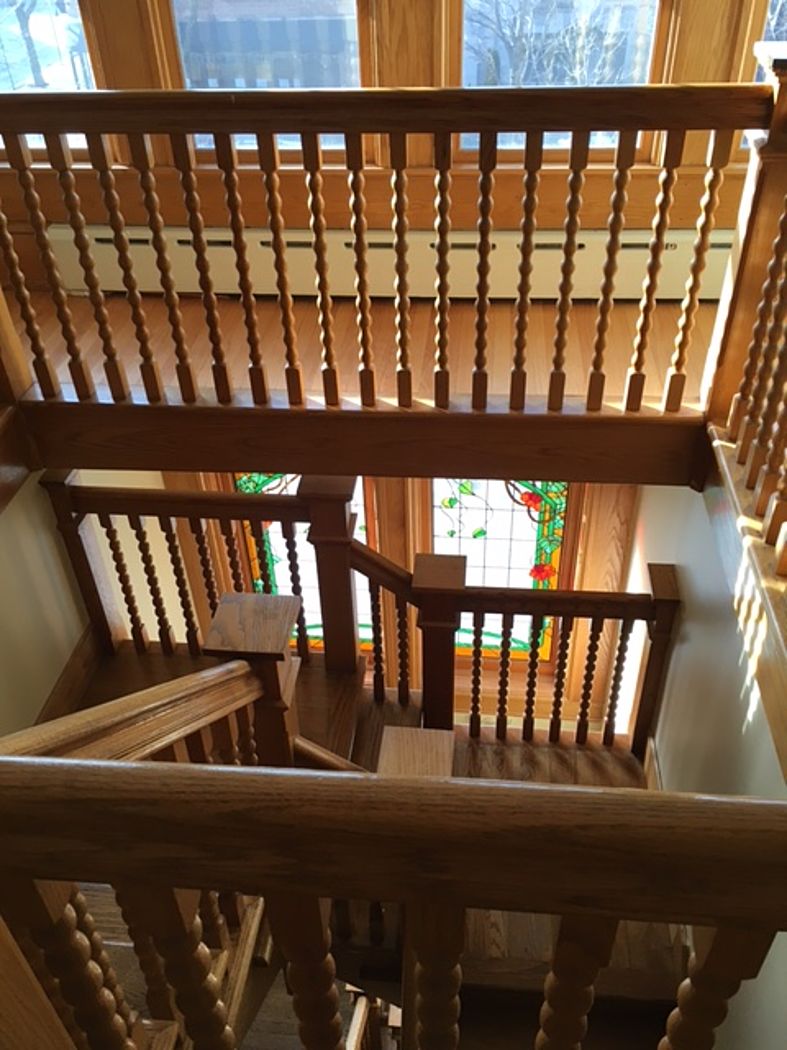 “The owners completely renovated the third floor, turning it into an incredible master suite and master bath with his-and-hers closets, an office and a sitting room,” says McCarthy. “The home also features five additional large bedrooms, three of which are en suites, a spacious remodeled kitchen and a dining area that flows right into the expansive family room, with large windows throughout the first floor providing amazing sunlight.”

Two floors down, the formerly unfinished basement was transformed into a huge recreation space, complete with a chalkboard-drawing wall and fitness room. The addition of an attached two-car garage, a large mudroom with built-in cubby organizers and a staircase to the lower level in place of the old elevator shaft continued the path toward “making the home more convenient for the everyday logistics of family living,” says McCarthy. 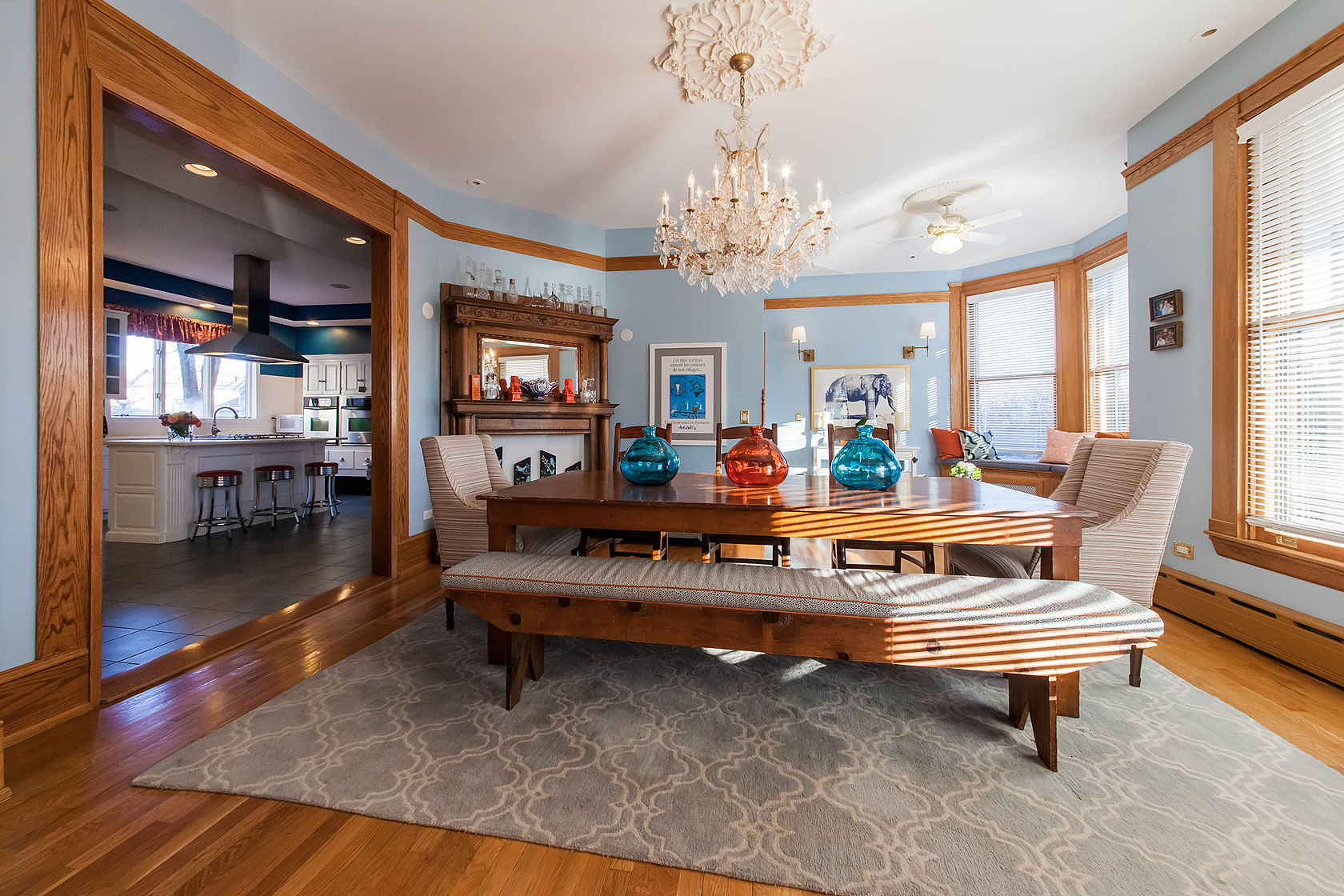 Outside, the goal was to create another space for recreation while allowing the grounds to breathe. Increasing the privacy of the corner lot and removing the asphalt driveway that wrapped around the house and took up most of the backyard allowed the Craigs to realize the space they had envisioned the first time they saw the property. 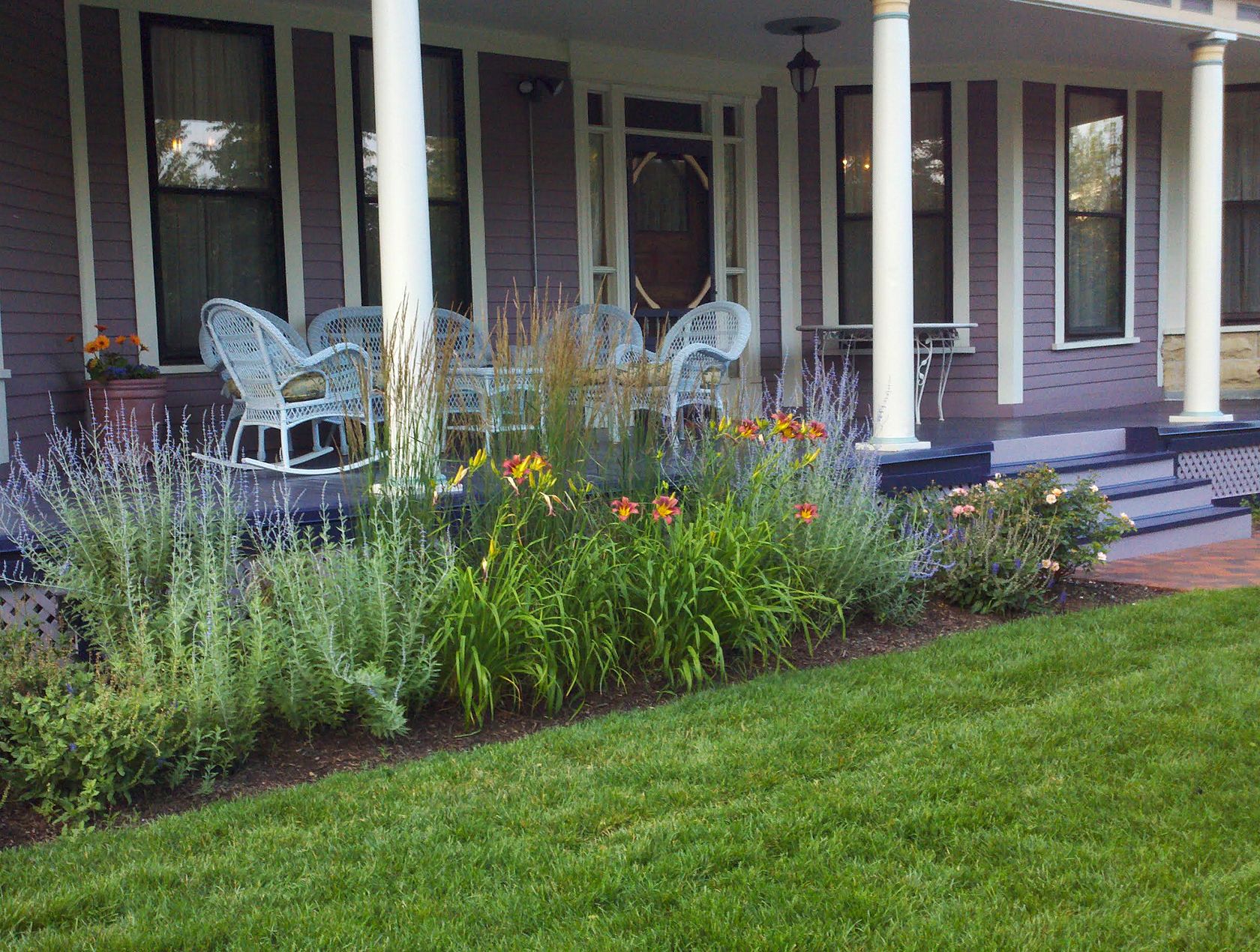 “The yard is newly landscaped and includes indigenous plants and a spacious lawn area, as well as new brick paver walkways and a patio, extensive entertainment space for outdoor dining and a large in-ground spa,” he says.

And then there’s the wraparound porch, regal and inviting as it was in 1891, welcoming another century-plus of wonderment, both from those who live inside and the many who can only imagine what it’s like.

House Tour: A Queen Anne for the Ages in Chicago

House Tour: A Queen Anne for the Ages in Chicago