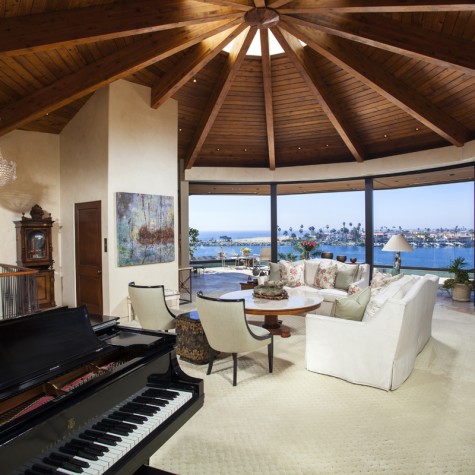 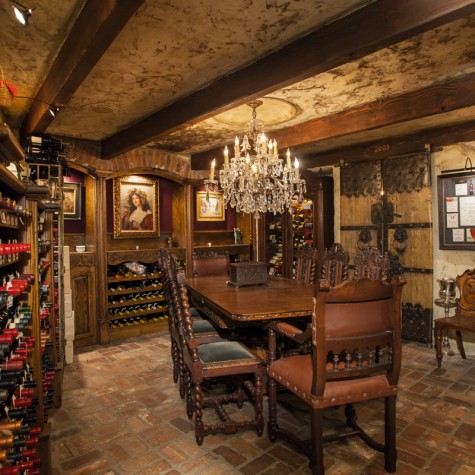 Building a dream home takes more than just vision. It often requires determination to move forward in spite of the “no’s” and the “can’t-be-done’s.” John Hamilton had both qualities in ample supply in 1970 as he stood at the entrance of Newport Harbor. The real estate developer and founder of the Newport Sports Museum spotted a vacant lot nestled on a rocky cliff in a quiet Corona del Mar enclave called China Cove.

“I could see that the views from that site were spectacular,” he recalls, before adding: “Arguably, the best views in all of Newport Beach.” 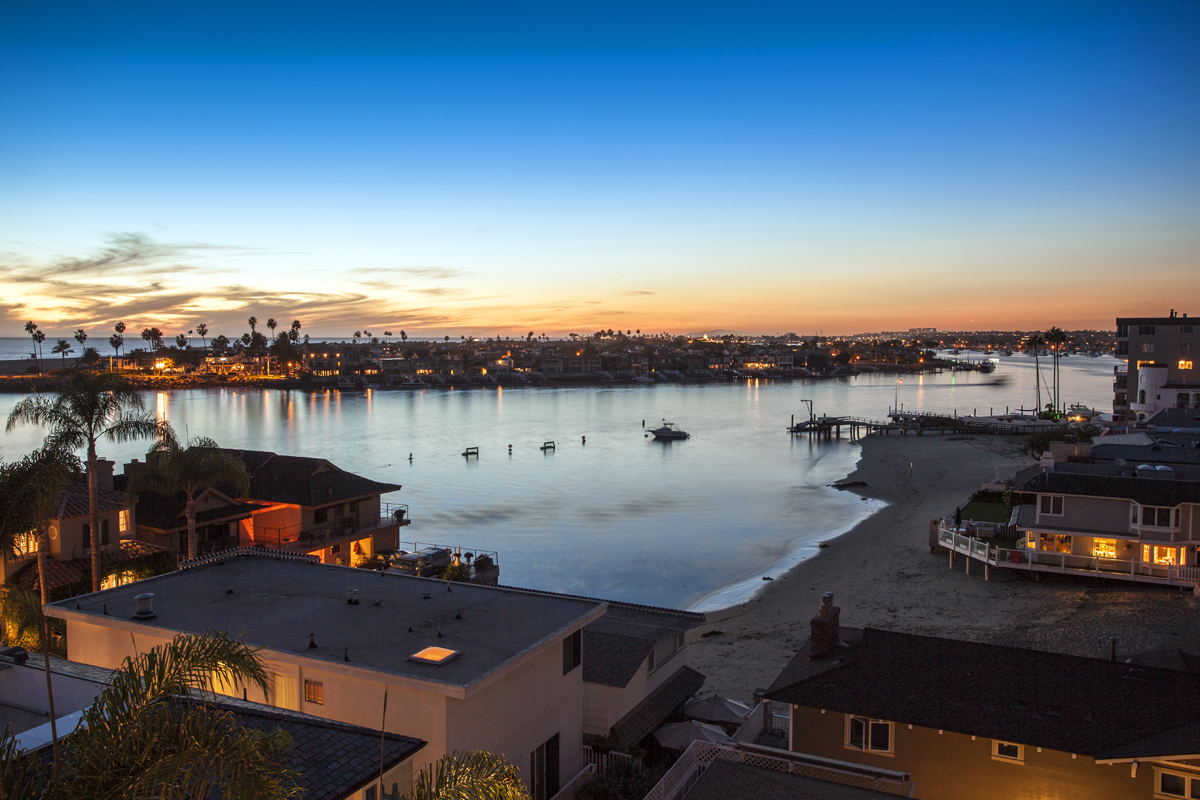 You won’t hear a matter-of-fact businessman like Hamilton talk of intuition—but that is precisely what led him to purchase a plot of land the LA Times once called “unbuildable.” He contacted his real estate agent who put him in touch with the owner, who happened to be legendary Newport Beach architect J. Herbert Brownell. Hamilton knew if anyone could design it, it would be Brownell and that Bob Lawson, well-known engineer out of Laguna Beach, could handle the engineering challenges involved in building a house that could rest on a steep 1:1 incline. Brownell and Lawson were energized by the challenge. Hamilton’s family, however, had reservations. His wife, Kathy, who was pregnant with the couple’s first child at the time, only agreed to the purchase on a condition: her husband had to build a flat yard where their future children could play. Other family members were cautiously optimistic. After taking his grandfather to the work site one day, Hamilton remembers one of the workmen asking him: “What do you think, Mr. Reilly?” He told them, “I think Johnny’s out of his mind. But I’m standing behind him.”

His family did indeed stand behind him. The Hamiltons raised all three of their children in the home, leaving behind a legacy of home ownership that lasted four decades and eventually grew to include 8,600 square feet, five bedrooms plus a maid’s room and five stories. Kathy got her flat ground and grassy yard at the entry—a feature no other homeowner on the bluff possesses to this day. Hamilton got his views, which can be enjoyed from every room in the house. His guests, too, got the luxury of curb cut and off-street parking, not to mention street-to-street access with a 5-car garage set on flat ground and approximately 30 paces from the beach. And since the front of the residence is hidden from the street, there is privacy and sound insulation from the top of the hill. 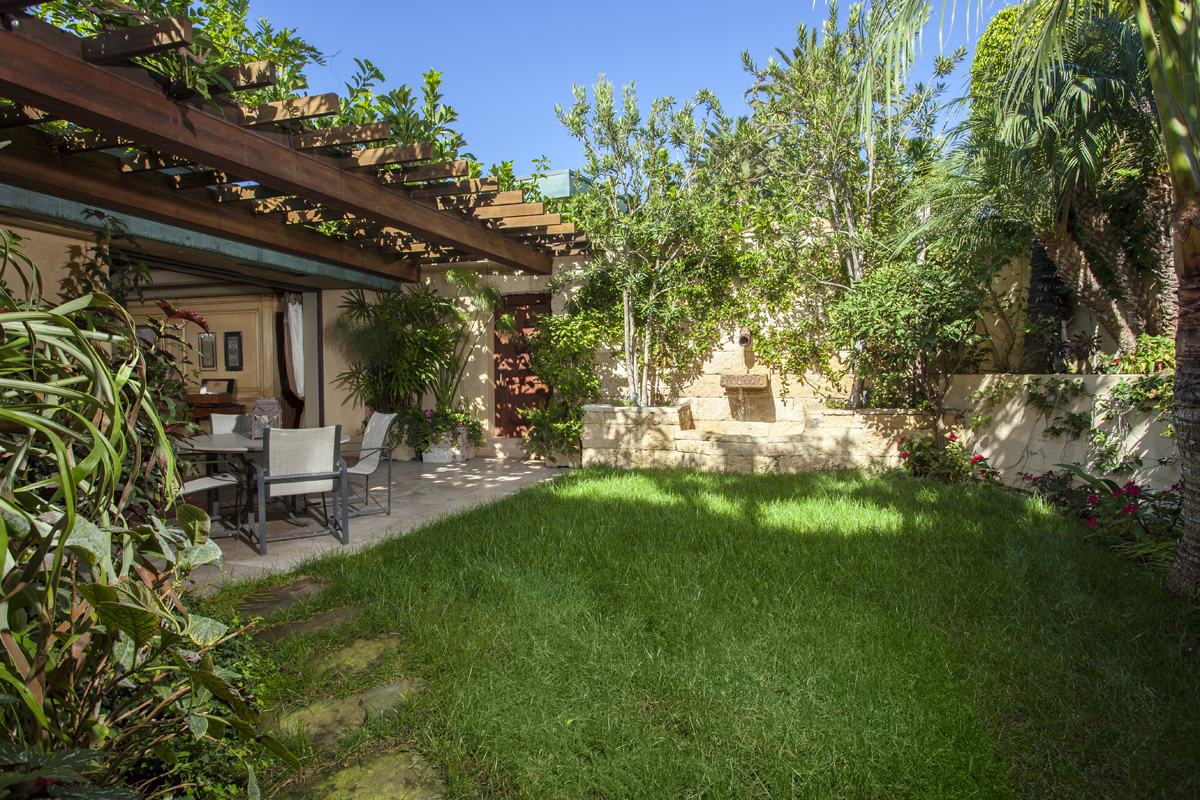 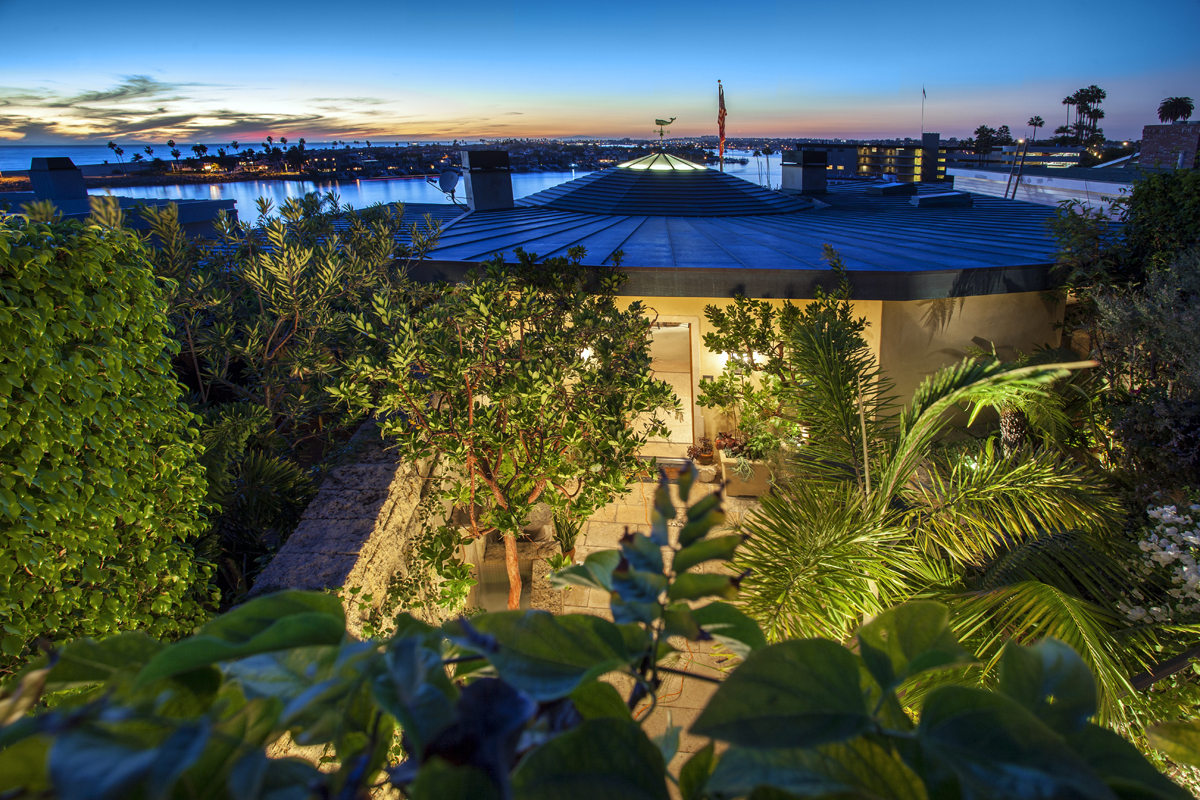 “This residence is a piece of Newport Harbor history,” says listing agent Georgina Jacobson of Coldwell Banker Residential Brokerage in Newport Beach. “It was a major accomplishment to build this home on what so many had said was an ‘unbuildable’ lot—but even more than that—John perfected and personalized this home with remnants of China Cove history. It’s completely unique to Corona del Mar. This home cannot be replicated today.”

Jacobson is referring to several one-of-a-kind architectural features thoughtfully integrated into the house over four subsequent renovations. For example, Hamilton built out a third-floor room—now used as a gym—with a 17-foot high ceiling and designed it around a million-year-old fossilized natural limestone wall with a waterfall. 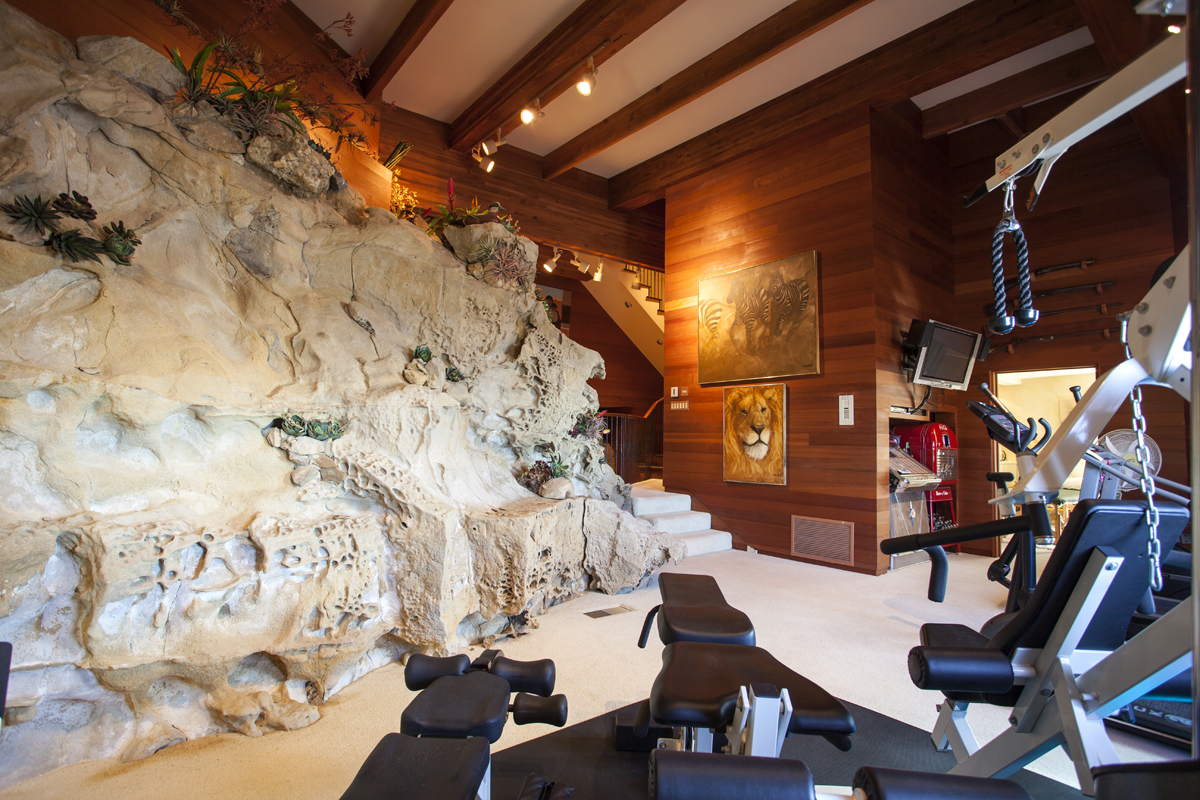 “Originally the house was two stories, but it always bothered me to not have this rock inside the house,” says Hamilton. “When it came time to add the third-story room, I knew I wanted to incorporate the rock. The waterfall was my idea. I was inspired after seeing water running off that rock one day. I thought it was beautiful.”

Other significant architectural elements came from the historic 1927 China House (a beloved landmark for which China Cove was named). After the China House sold in 1986 and the new owners’ plan to demolish it was made public, Hamilton tried to talk them out of it to no avail. He did manage to preserve large portions of the pink pagoda-themed residence—a tile roof, the wood corbels with gold leaf painted dragons and copper horns. Today, many of these remnants blend seamlessly into his home’s architecture, along with an inscription about the history of China Cove for the next homeowner to enjoy.

“He is very connected to the community,” adds Jacobson. “The next owner will share that sense of pride and appreciation for history on some level.” 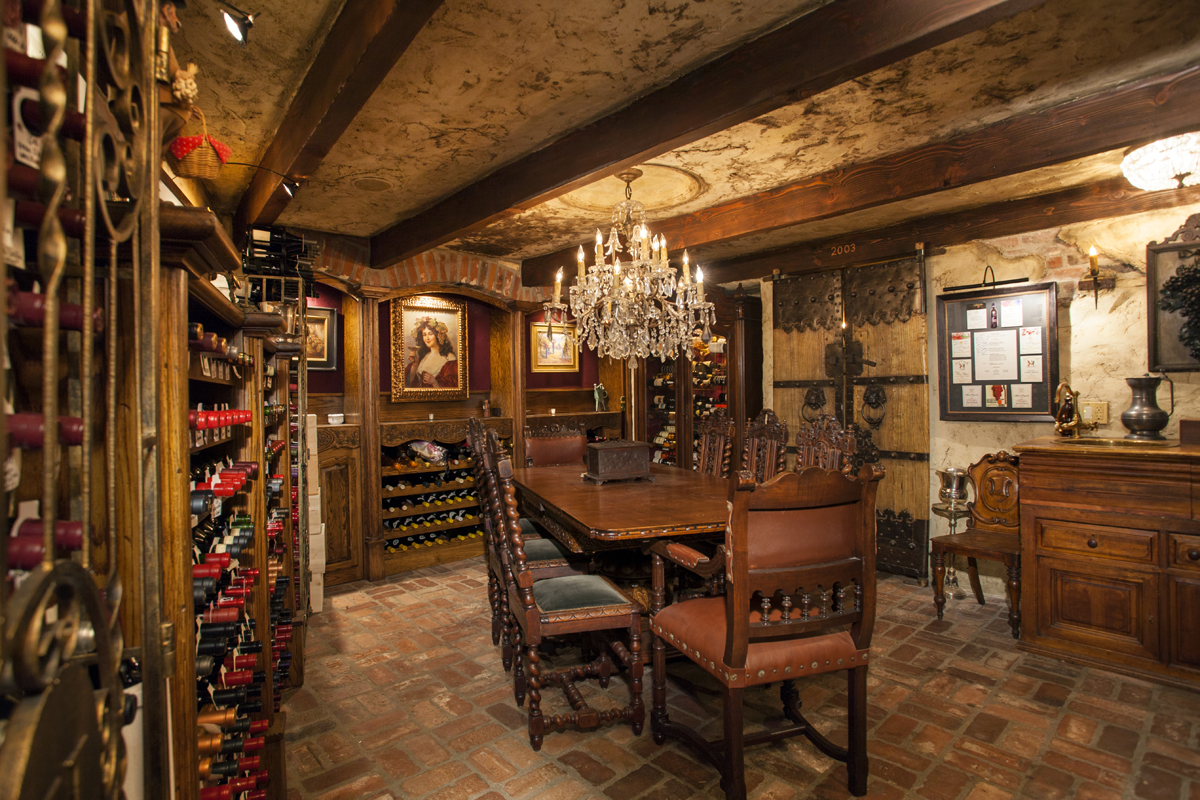 He or she will surely be an admirer of fine wine as well. Hamilton, a passionate collector, spent the last 40 years finessing his more than 1,000-square-foot, temperature-controlled, 4,000-bottle wine cellar and richly appointed tasting room. Once featured in Wine Spectator magazine and carved out of the hillside, the cellar can be accessed via elevator and spiral staircase and is organized by both varietal and region, with Bordeaux and Cabernets housed in separate rooms and an enviable cabinet filled with ancient Madeiras and ports dating back to 1835. Executives from several world-class wineries, including the general manager of Chateau Mouton Rothschild, have tasted historic vintages in its cavernous spaces. 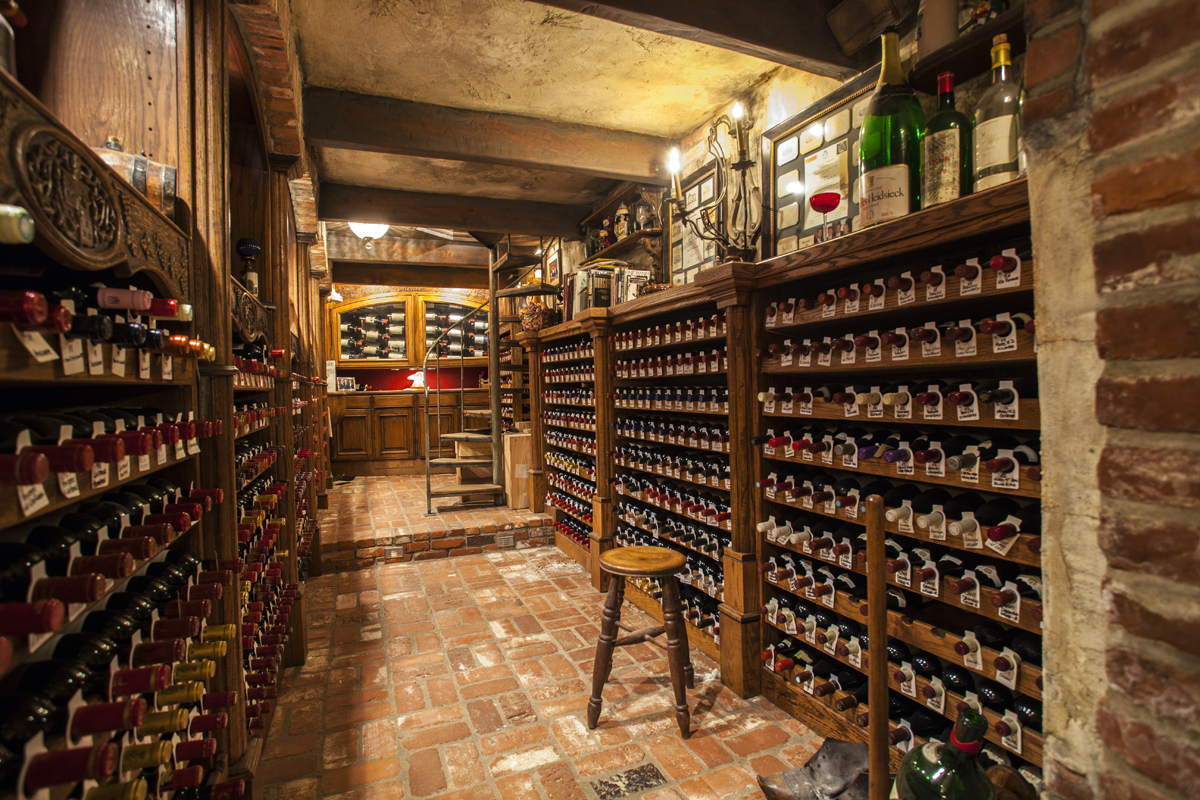 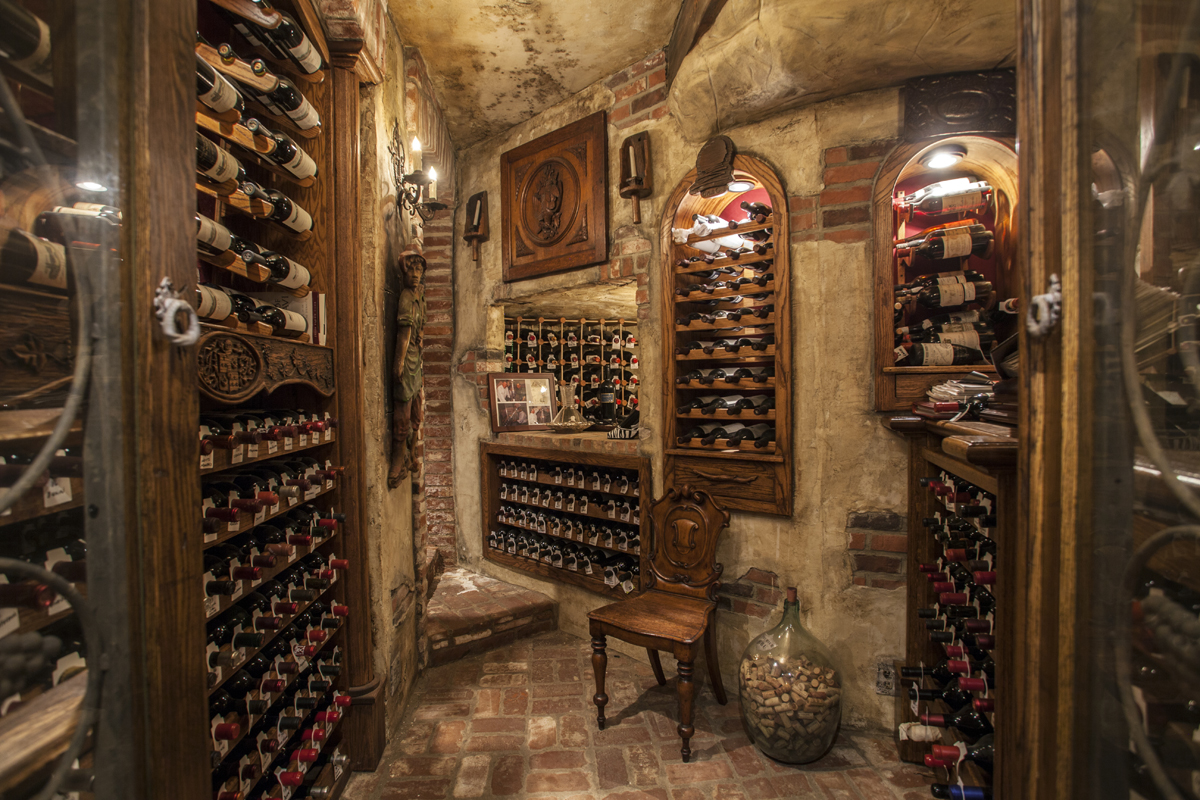 Not surprisingly, one of Hamilton’s favorite things to do is to open the motorized curved glass doors and sit on his wrap-around limestone patio, drinking a White Burgundy and watching the sun set over the harbor. A well-known philanthropist, he has hosted more than his fair share of parties and fundraisers on this very patio, much to the awe and delight of his guests.

“We oriented everything to the balcony and the view,” says Hamilton. “Having expanded the balcony will be important for the next owner.”

The last renovation was in 2008, overseen by local architect David Frith, and included a significant extension, additional concrete walls, 40,000 pounds of steel, and the creation of a more dynamic entry. Now, guests are led into the house by Texas fossilized limestone—almost as if they are walking on sea shells from the entry to the living and dining rooms. 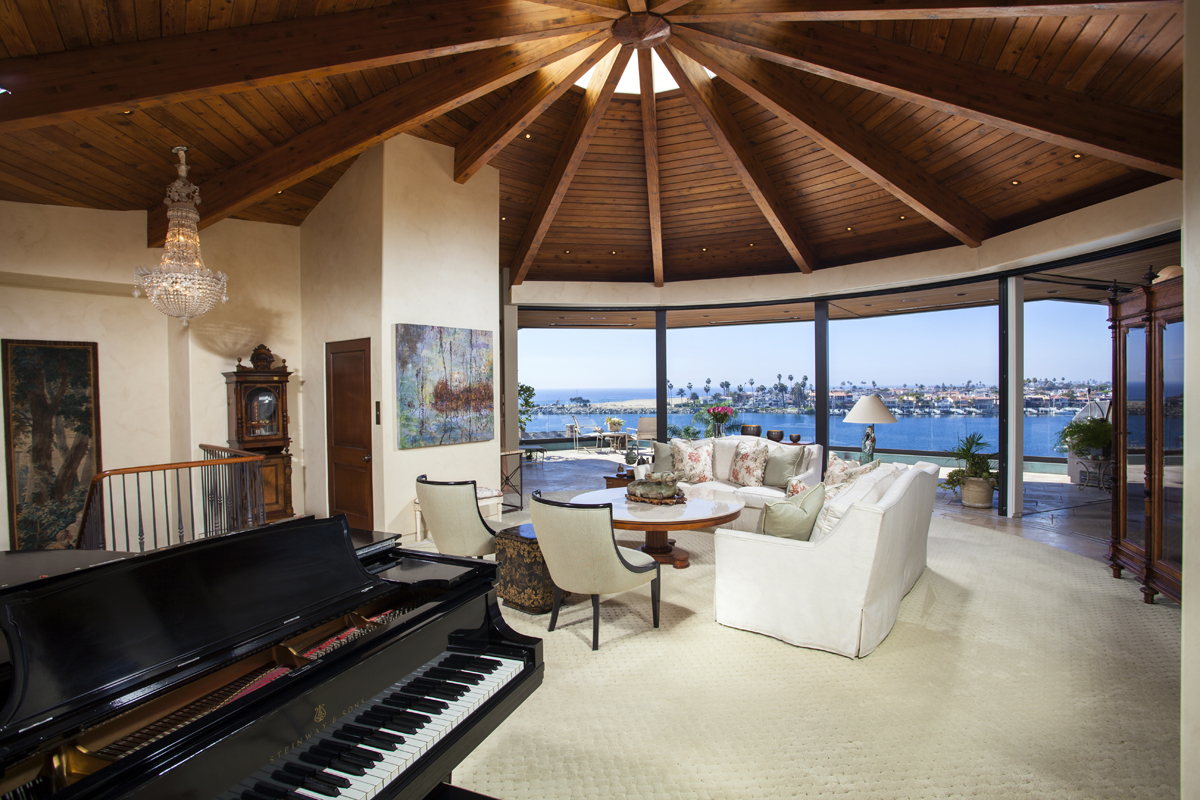 Other improvements included the kitchen’s granite counter tops, pantry, top-of-the-line appliances, walnut floors and opening to the family room with a fireplace and breakfast room with heated limestone floor. 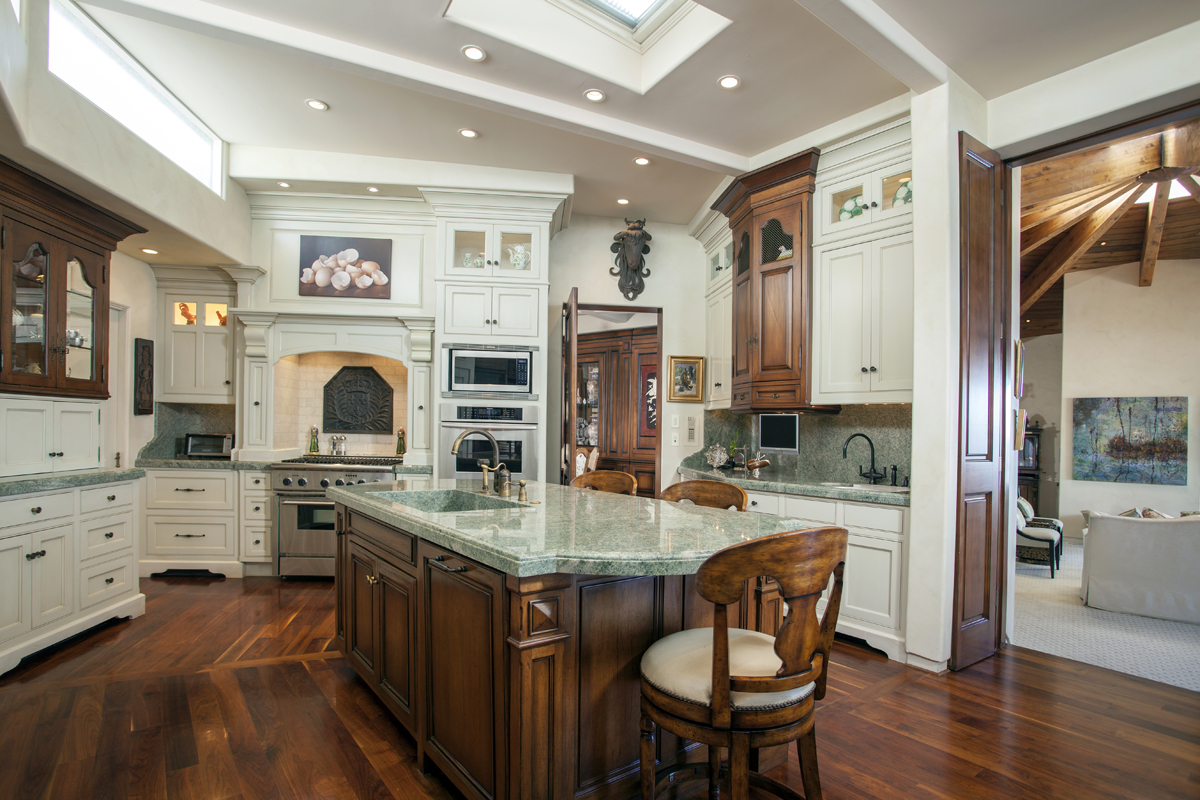 The formal dining room took on new life with an adjacent outdoor fireplace as well. However, it’s the sweeping 500-pound curved glass motorized sliding doors, which open to the patio with a touch of a button and disappear into the wall that wow most visitors of the cliffside abode. 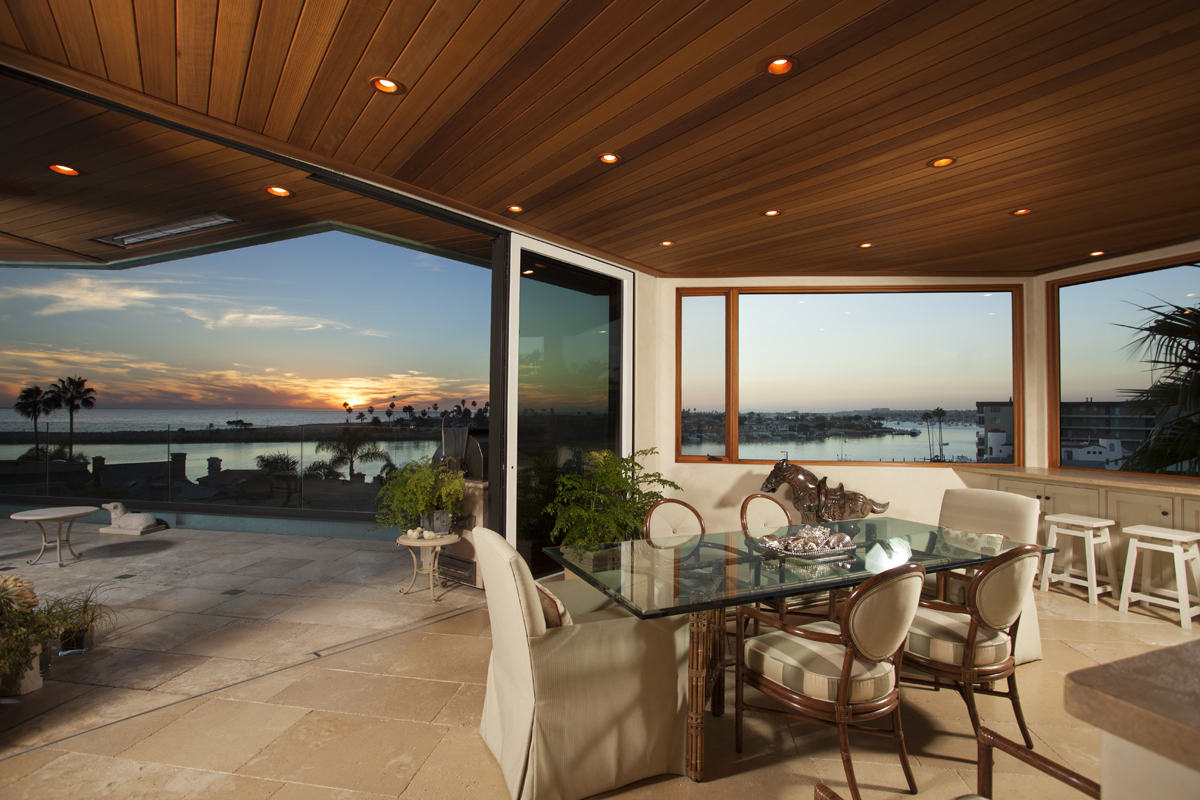 “It’s like a picture in motion,” describes Jacobson. “Between the waves crashing against the Wedge surfing spot and the jet skis, the yacht races, views of Catalina, the channel and Palos Verdes, and people lining up across the harbor to view the waves, you feel like you are a part of something important—yet you’re perched in privacy on this hillside, just a touch removed from it.” 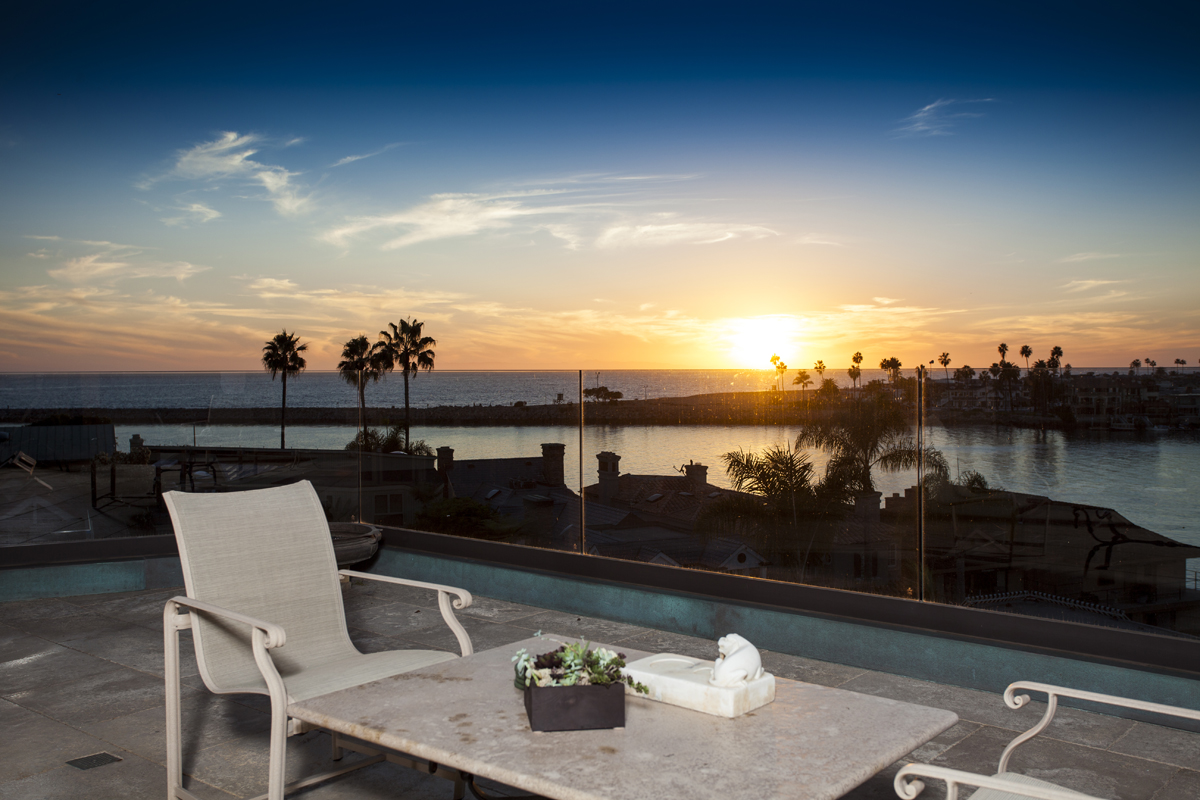 It’s just the picture that Hamilton glimpsed on the Wedge more than 40 years ago—a dream made real by making the unbuildable seem possible.

This unparalleled custom Corona del Mar estate is priced at $22,999,000 USD, and represented by Georgina Jacobson, Pallie Jones and Michael Carpenter of Coldwell Banker Residential Brokerage in Newport Beach. More information can be found by contacting (949) 285-8380 or (949) 721-5078.