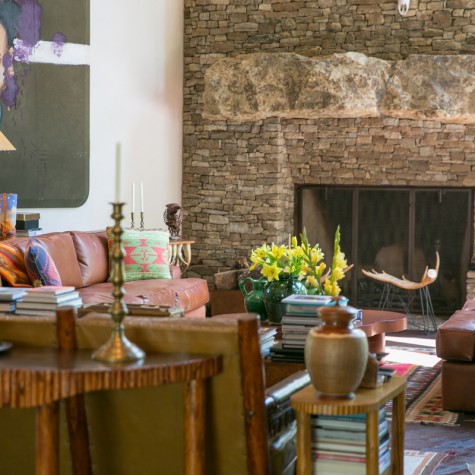 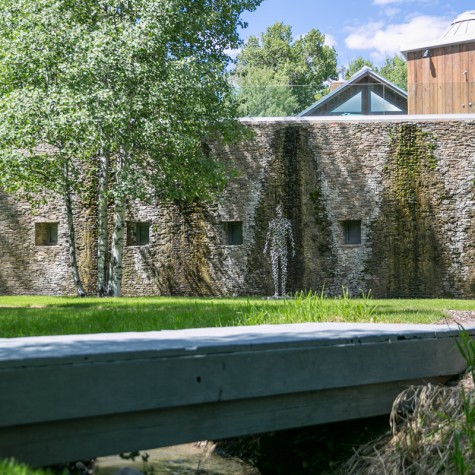 Idaho’s Sawtooth Mountains, or the “American Alps” as they are affectionately called, have lured some of our country’s greatest thinkers, artists and writers. Hemingway famously sought out the region’s rugged authenticity and crystal-clear streams as a creative escape. Similarly, Ruth and Jake Bloom and their two children found the beauty of the mountains, along with Sun Valley’s world-class skiing, an inspiring place for family vacations. They began making the trek from their coastal Marina del Rey perch back in the late 1980s.

“We fell in love with it,” says Ruth Bloom, a former art gallery owner. They particularly liked Sun Valley’s elevation; at 5,920 feet, it is lower than most Rocky Mountain resorts. They also appreciated its history; it has mining roots dating back to the 1800s and later became known as “America’s First Destination Ski Resort” in the 1930s. After spending a few winters in a rented house, the Blooms decided: “We should have a place here.”

They set out on a momentous search for their vacation retreat. It didn’t take long before they happened upon a property that exceeded their imagination: over 18 acres of land resting on the Bigwood River, with streams flowing around it and those majestic Sawtooths as its backdrop.

“We were just so taken with the privacy of it,” recalls Bloom, who was accustomed to the tightly compact lots of the Marina del Rey Peninsula. “There was a serenity to it, and yet it was close to everything we wanted to do — skiing, hiking, fishing and in-town amenities in nearby Ketchum. We could see it was going to be the perfect escape for all of us.”

The Blooms bought the property in 1992 but spent the next four years meticulously plotting out their home. They visited the land during every season so they could make sure it was placed in the perfect spot on the site. They also hired L.A.-based architect Frederick Fisher — known for his more modernist creations — to design their new architectural home.

“Fred Fisher had designed my art galleries,” says Bloom. “It was a no-brainer to hire him. He’s easy to work with, and he listens to what you want.”

One of Fisher’s first orders of business was siting the house so it took full advantage of the mountain and stream views. Recalls Fisher: “The only way to site the house was to walk the land, look for the best views and experience how the sun moves from morning to night. I triangulated the topography, view and the path of the sun with the intangibles of the site to arrive at the ‘sweet spot’ for the living room and laid it out from there.”

The kitchen location was key, says Fisher, since the Blooms live, cook, work, relax and entertain in this space. 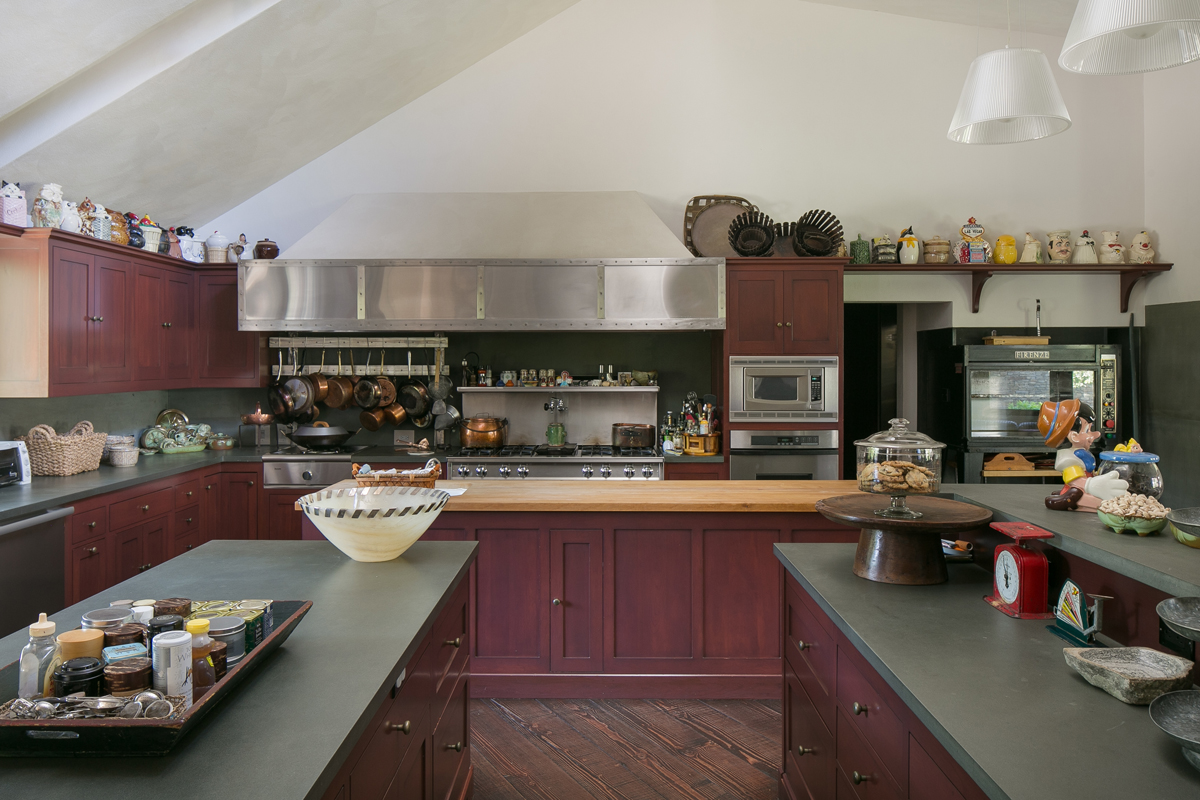 “I like to get morning light in the kitchen but also sunset,” he explains. “Getting sunlight into the kitchen at all times of day led to the idea of a central courtyard. It is the key organizing element of the house. The court is a square oriented to the cardinal points, while the house is a ‘village’ of pavilions that cluster around the court in the picturesque fashion of a farm compound. We used century-old recycled mill wood to lend a rural authenticity.” 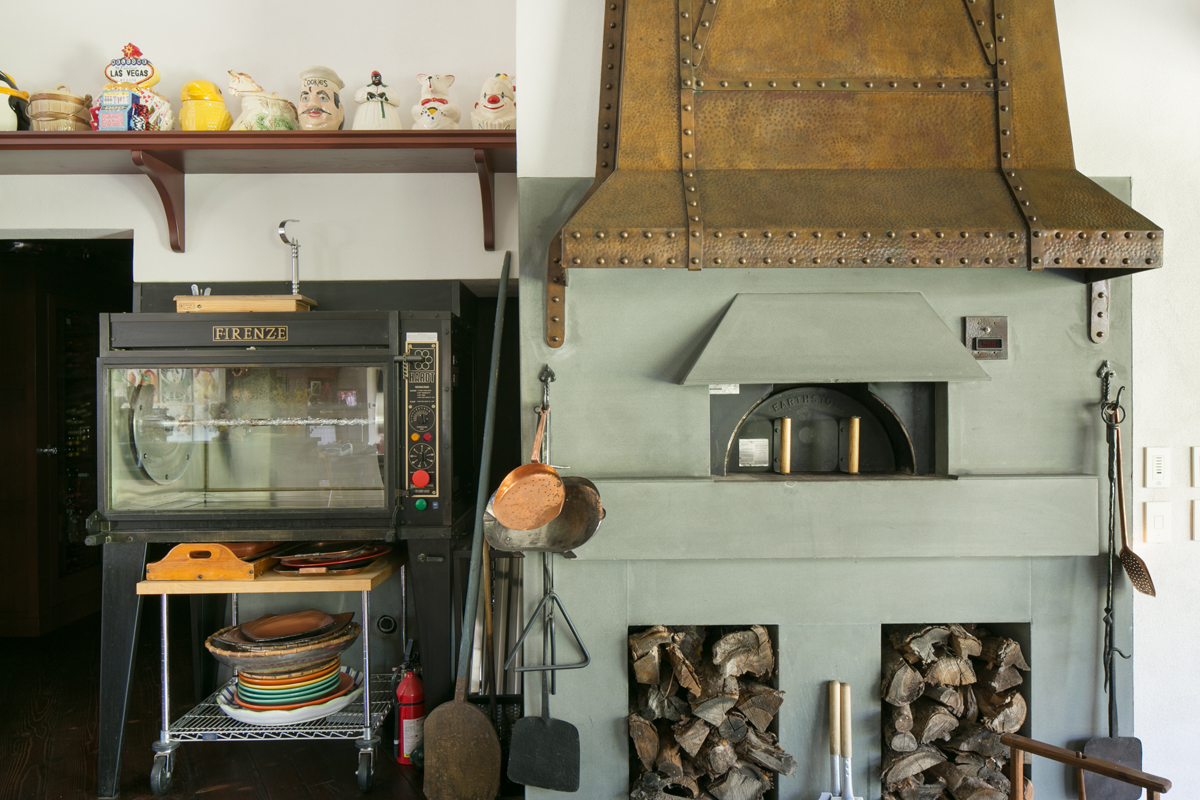 Fisher’s design sought to strike a harmonious balance between the Western vernacular and a modernist aesthetic. Hints of his time working with Frank Gehry, now famous for his deconstructivist approach, echo throughout the main residence. For instance, Fisher created gallery areas that break up the space into a series of rooms that double as gathering spaces for large parties or corporate functions. The effect is an intimate and personal space incorporated into an area grand enough for the Blooms’ extensive contemporary art collection. He also drew inspiration from farmhouses, mill buildings and ranches in Europe for the 17,042-square-foot main residence. 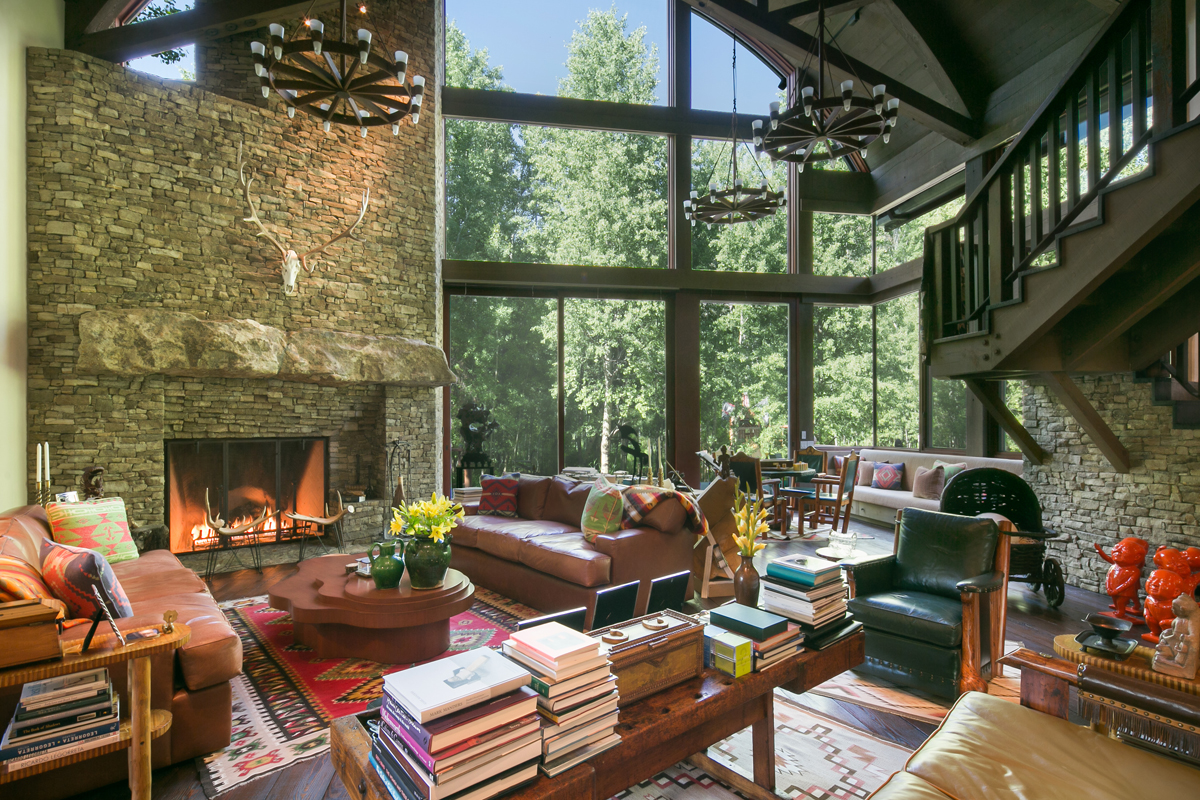 “The curved roof of the living room is typical of barn structure of Italy,” says Bloom. “He created a courtyard to give us a sense of privacy, and it ended up being great for a garden because the heat would stay longer there.” 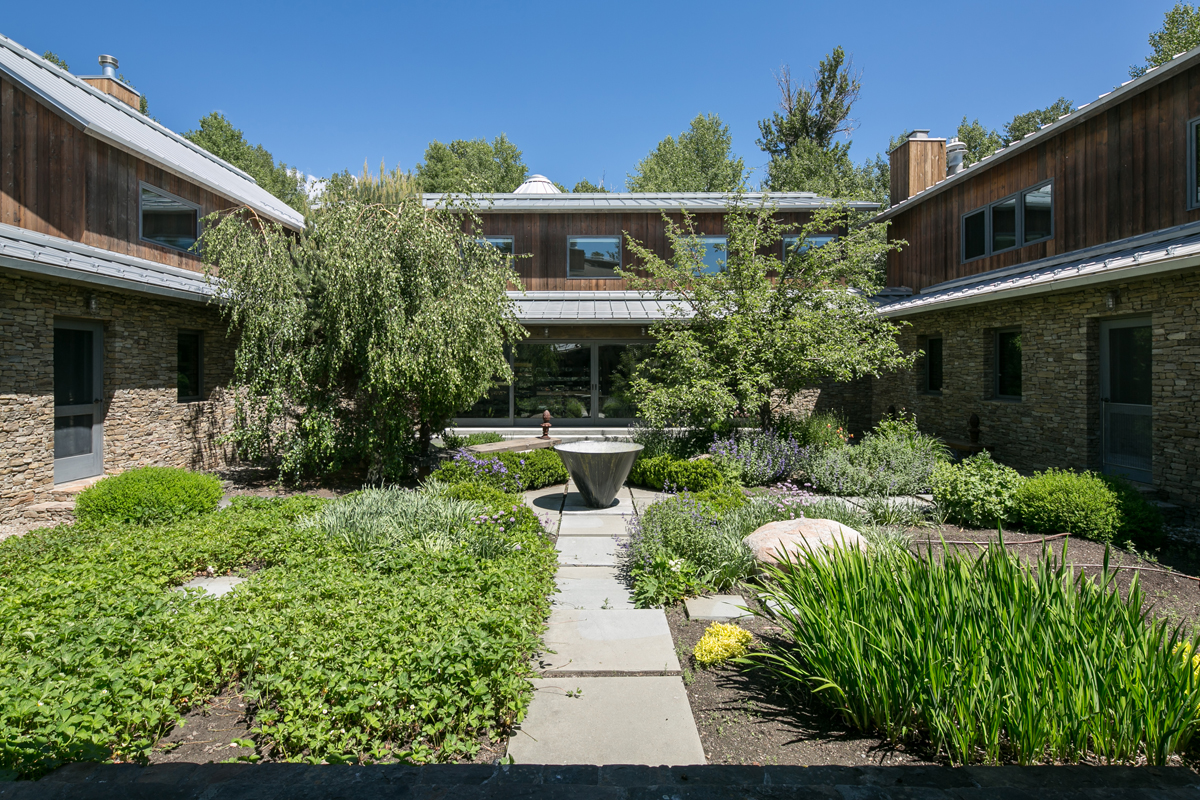 Bloom herself felt it was imperative that the house maintain a sense of timelessness. She held most of her design decisions against a litmus test: “If you visited the house 50 years from now, would it still look as fresh and current as the day it was first built?” All of the building materials were sourced locally to maintain the home’s theme of timelessness. Local stone, continuous fir plank flooring, ancient glass windows, coupled with Molesworth doors, as well as raw plaster walls and kitchen cabinets made of fine cherry wood lend to the home’s feeling of authenticity. 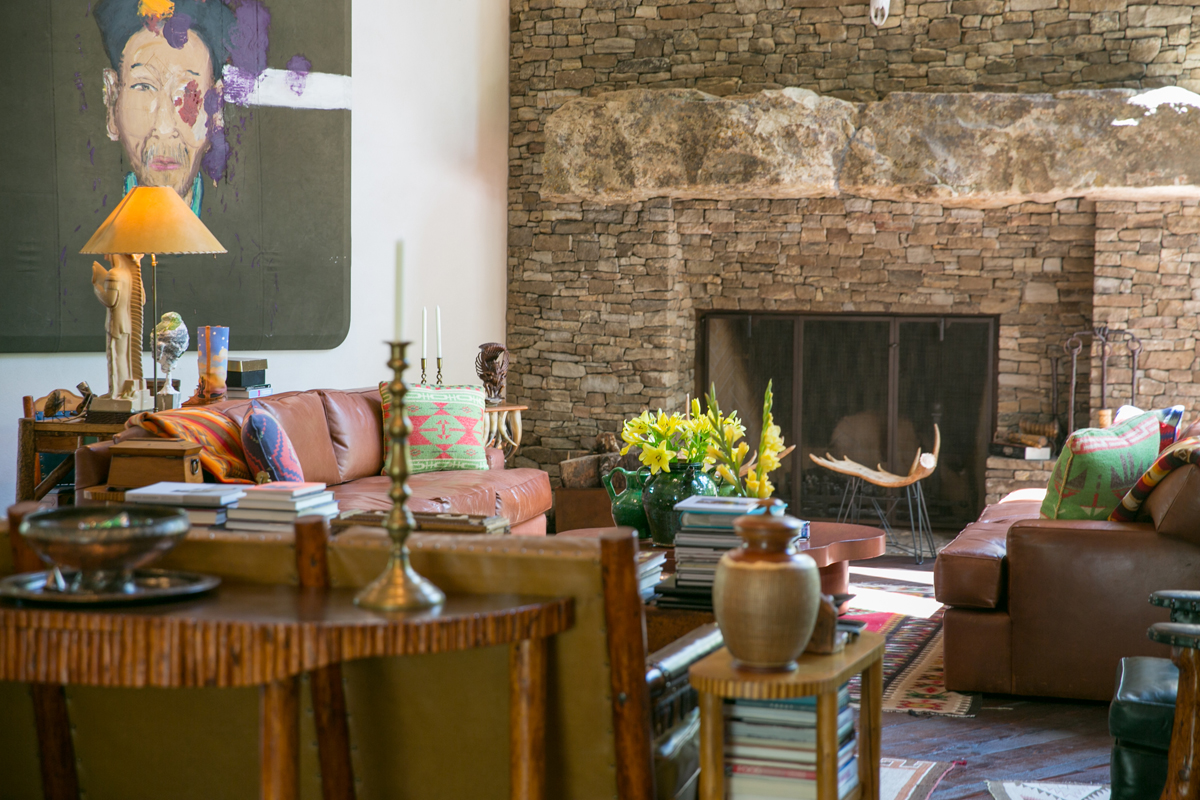 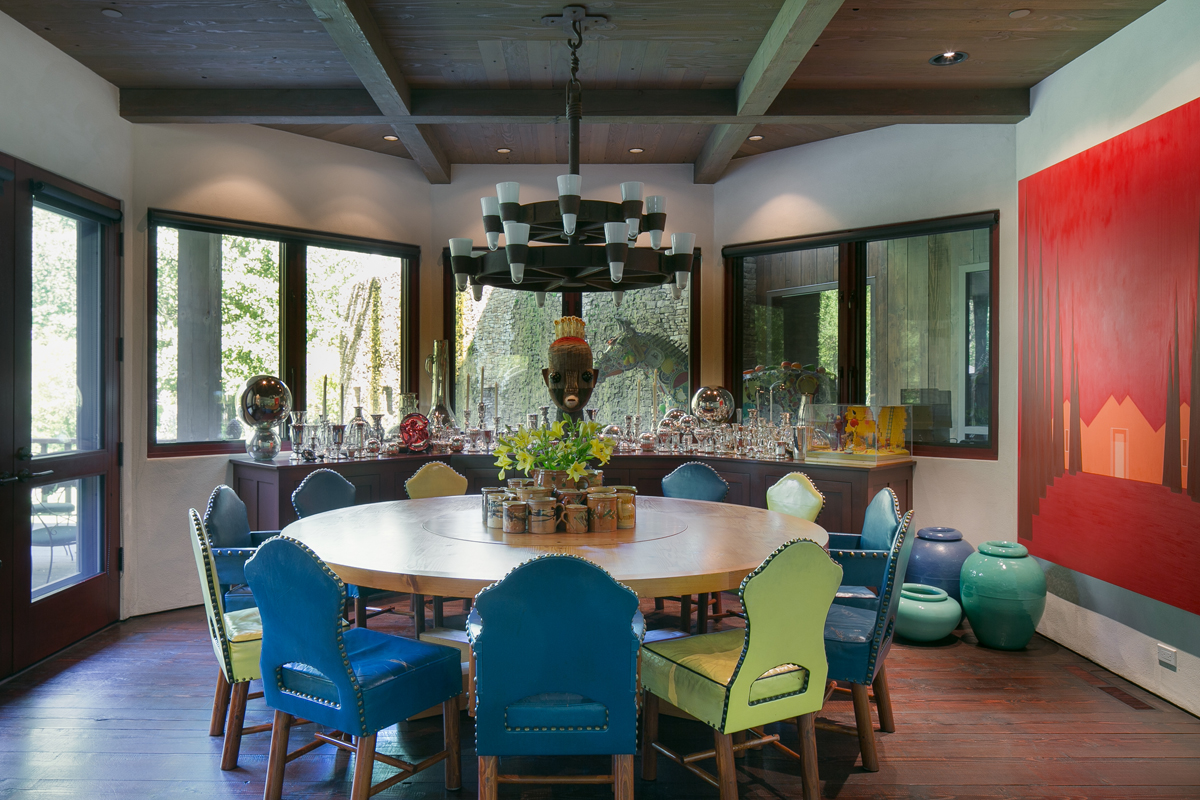 “The whole idea of ‘less is more’ is a really important theme in the house,” explains Bloom. “People will often notice that there is no window trim or wall moldings. It was very purposeful. It was built to have a contemporary feel, but we’ve combined it with Western furniture. You could still add modern furniture, and the house would not feel dated in any way.” 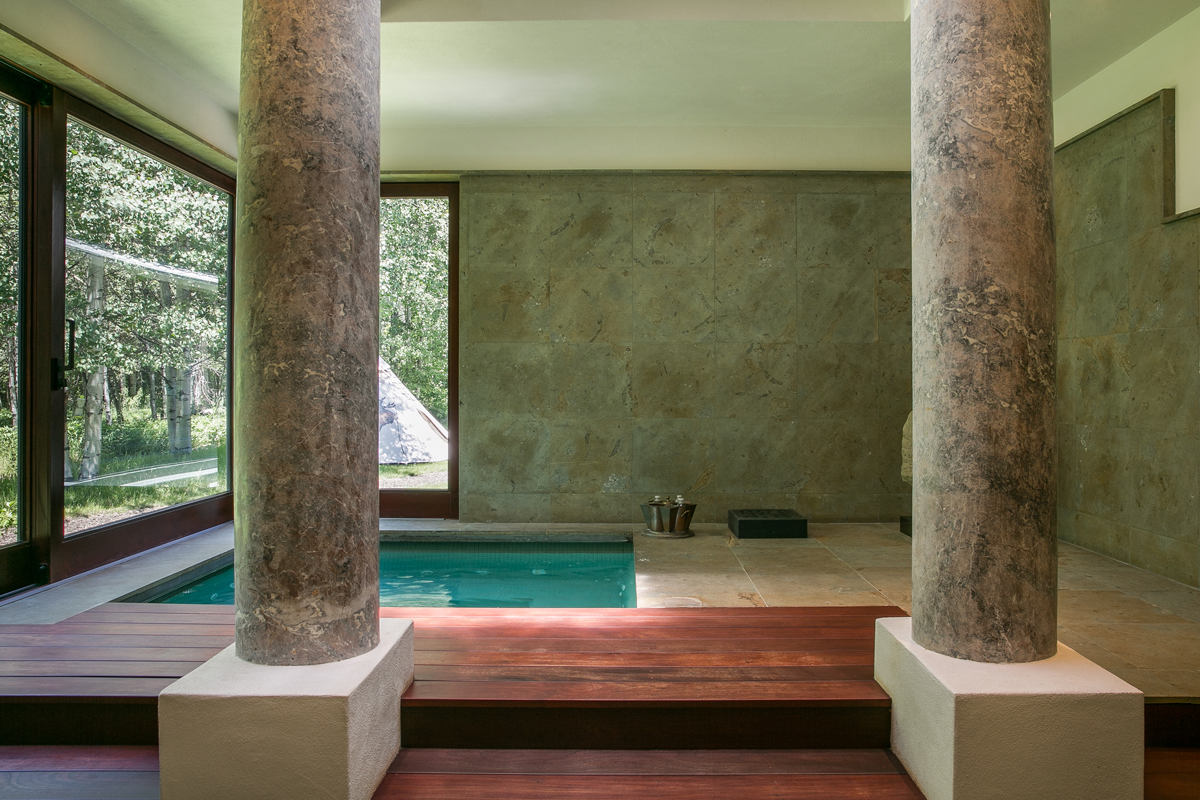 Yet, its design somehow feels understated. Even the most extravagant room, the art gallery with its glass doors opening to create a complete indoor/outdoor space, has a warmth and ease to it.

“When you’re art collectors, you never have enough room,” Bloom says of her decision to build the gallery. “It was just a given. Art is always a part of our lives. The house was always going to be filled with art. There was nobody saying ‘no’ to us.” 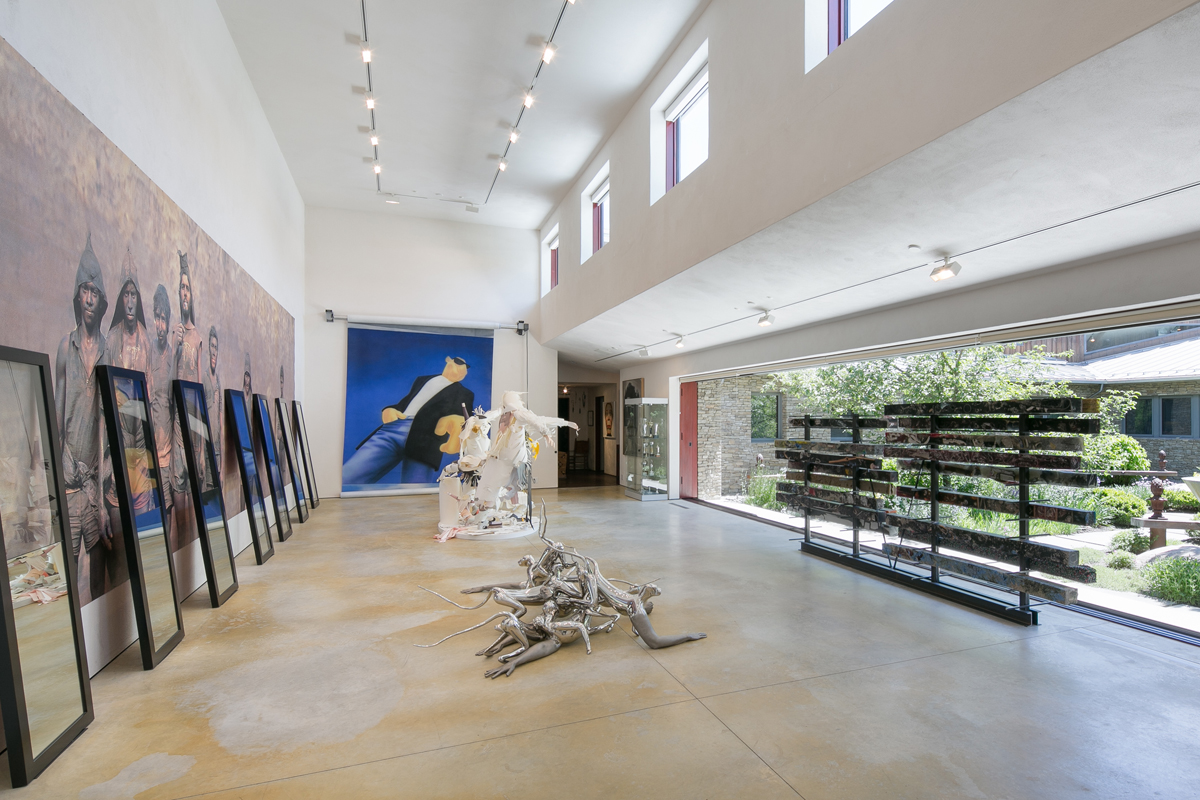 Bloom sees the space as flexible enough to turn into an extra guest bedroom and bathroom suite, since it also comes with its own butler’s kitchen. But if anything, the space is primed for large-scale entertaining. The Blooms themselves have used the space for many big events over the seasons, including her daughter’s 325-person wedding in 2008. 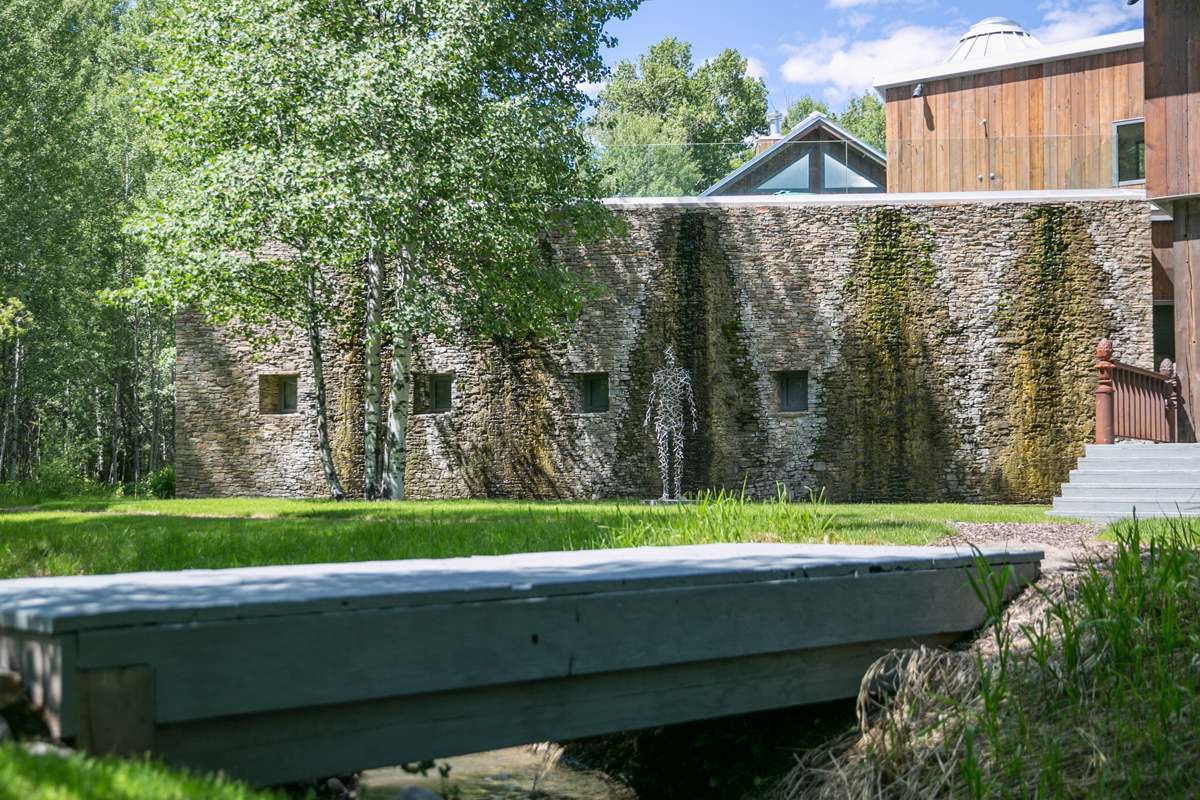 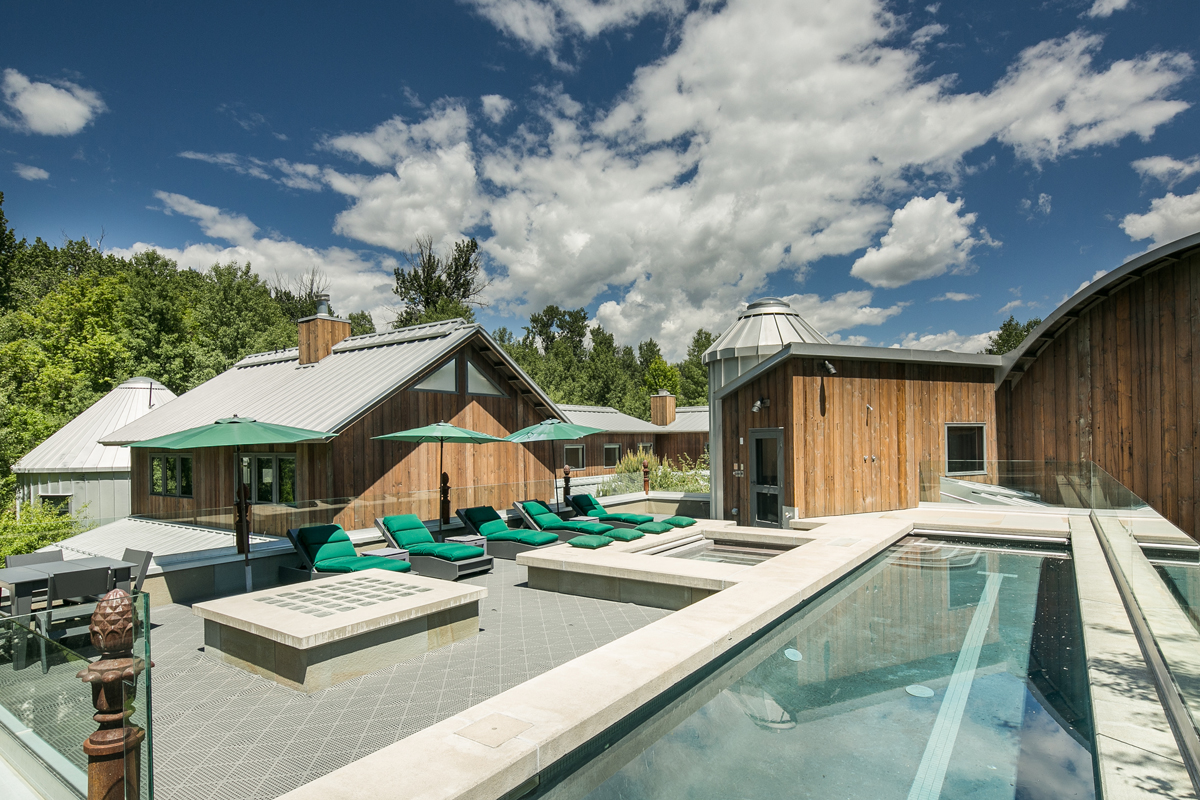 “I’m proud of the house,” concludes Bloom. “It’s my best version of art, in the sense that we created a home that makes people comfortable right when they walk in the door. It’s magical.”