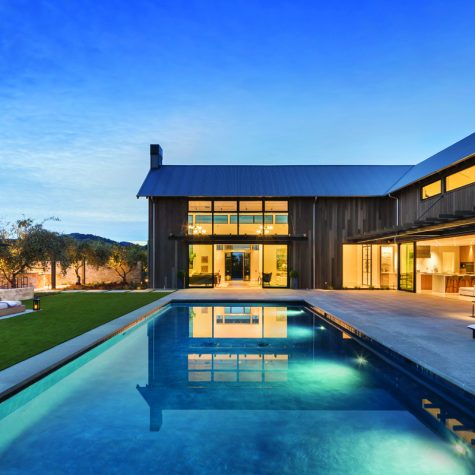 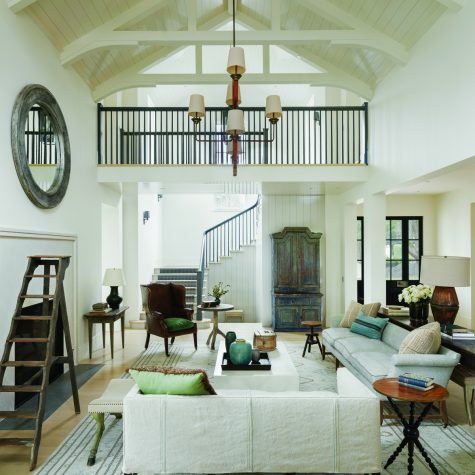 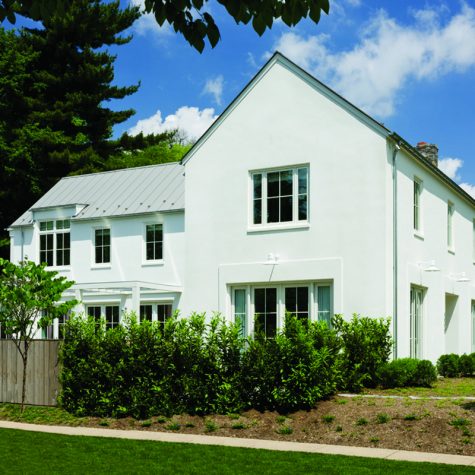 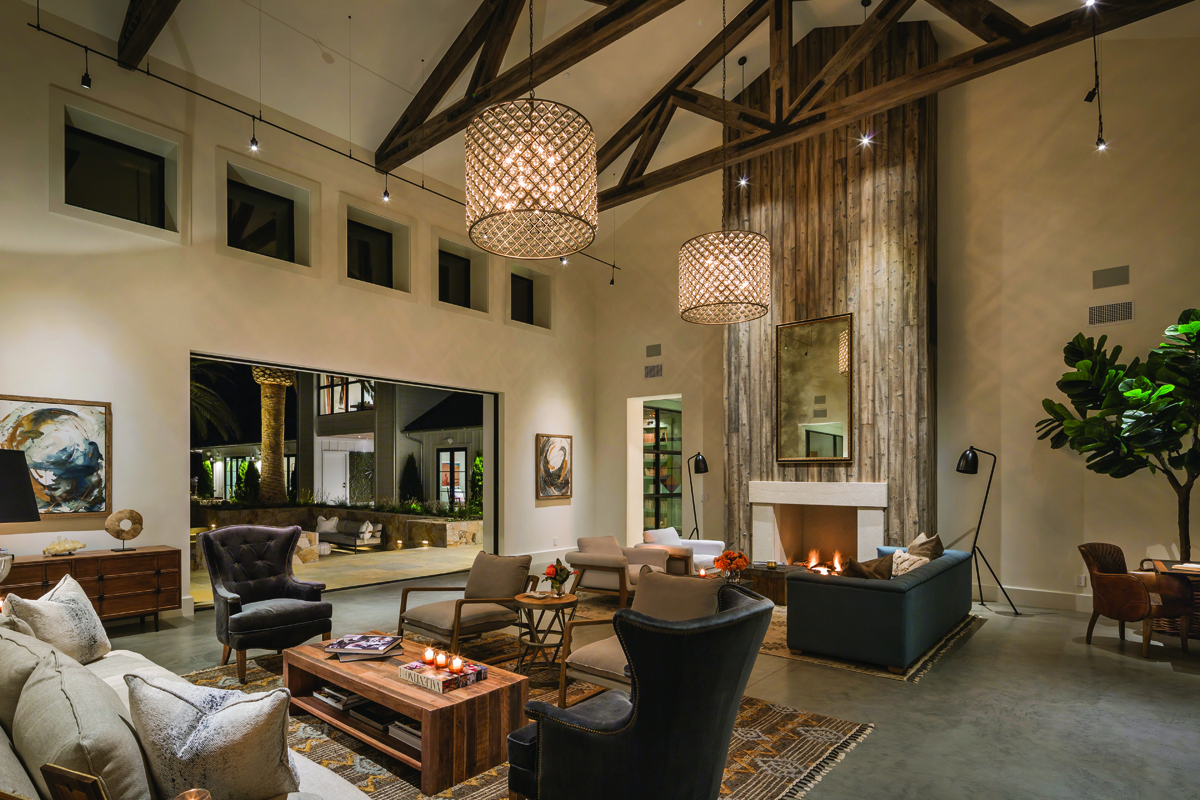 We could be in Waco, Texas, in what many believe is ground zero for today’s most prevalent architectural trend, the modern farmhouse. After all, this is where Chip and Joanna Gaines built an empire fashioned out of shiplap. But whereas most of the homes showcased on their popular HGTV show “Fixer Upper” may have been more appropriate for first-time buyers and dealseekers, modern farmhouses have also bubbled up into the high-end real estate realm.

In cities across the country, these modern farmhouses are altering the landscape of decidedly nonfarm-like environs. Anne Decker Architects has built a number of traditional farmhouses on horse farms, but its Bethesda, Maryland, modern version illustrates what can happen when you take a “casual farmhouse feel with more abstract forms” and weave it into an urban neighborhood, says Decker.

In Houston, Lisa Gregory, owner of Coldwell Banker Residential Brokerage’s Lisa Gregory Real Estate Group, is finding that clients are looking to structures like modern farmhouses as the antithesis of the “dark, heavy architecture and finishes that were popular for so long.” Today, buyers want “light, bright and airy spaces that are comfortable and exude warmth — as opposed to our traditional view of the excess and opulence associated with high-end properties,” she says.

The style is particularly prevalent today in Northern California, where original farmhouses on vast expanses of land mingle with brand-new construction in developed neighborhoods. “Development tends to be all rebuilds here, because so much of the land in Silicon Valley has already been built out,” says Coldwell Banker Residential Brokerage’s agent Christopher Fling, of top-producing Silicon Valley real estate team Fling Yang & Associates. “So even if you’re building a new property, you’re typically building in an existing neighborhood. The modern farmhouse ends up complementing the traditional ranch houses that already exist — so you feel like you are integrating more effectively into the neighborhood.” 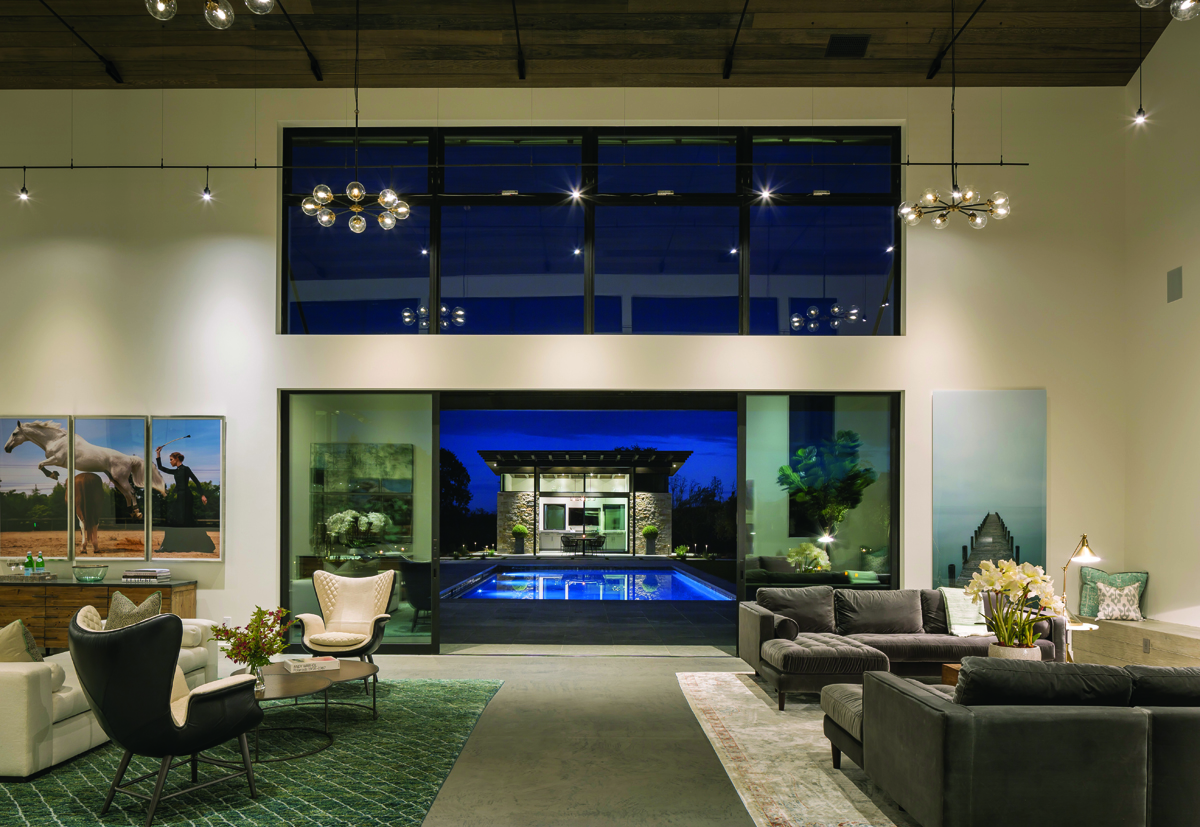 About 40 miles north in Napa, holder | parlette architecture is interpreting the style with custom estates that speak to the needs of the homeowners and connect back to the land. The firm’s sprawling Cunningham residence in Napa is the result of the client having “requested farmhouse style, but also wanting to be able to entertain on a large scale,” says the firm’s principal, Kenneth Holder. “They needed a big house with six bedrooms and room to entertain 70 people. We referenced photos of Victorian farmhouses in the Salinas Valley in the 1930s for inspiration yet still chose to say something about current values.” 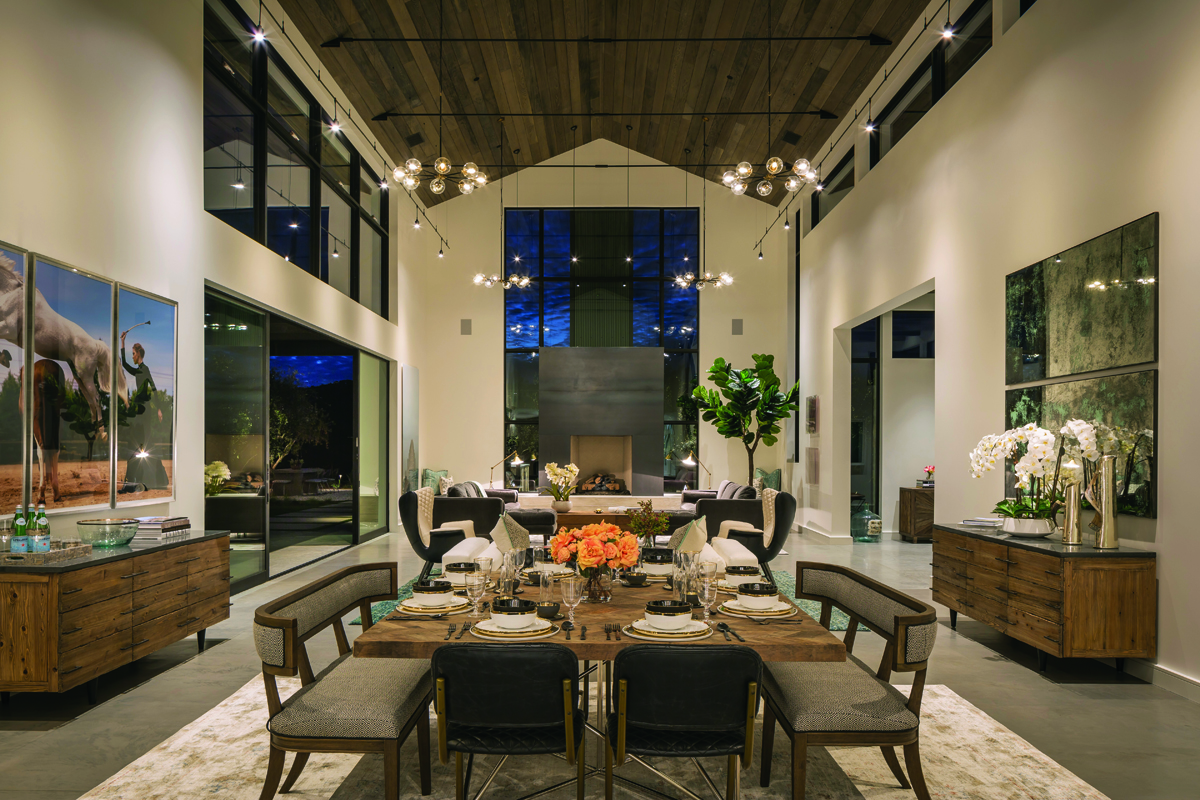 The 11,000-square-foot residence features a painted board-and-batten exterior and a metal roof, with a wide-open interior configured around an immense great room with a floor-to-ceiling fireplace covered in vertical wood planks. There are numerous opportunities for indoor-outdoor living on the property and framed views of the Napa Valley — the inspiration and driving force behind many of Holder’s designs. “The most meaningful house is the one that draws your attention to the beauty of that location in a unique way,” he says. “Especially in a place like Napa, Marin, or any place where you have beautiful views and weather, the house should be about flow, daylight and connection to the outdoors. We also use materials like concrete floors, cedar siding, bulky beams and exposed rafters to give the home more warmth. We don’t want to build a house that people will see 10 years from now and say, “That’s so 2019.”

The reticence to sink deeply into the more traditional aspects of the trend is understandable — especially in California, where a proliferation of Mediterranean homes speaks to a specific time period.

“Twenty years ago, many people could not imagine past Tuscan,” says Holder. “To make a statement about Napa, we were turning to Italy, rather than looking locally for inspiration. “Today, people want updated farmhouses, but we don’t want to rely on a formula. We’re pushing people toward more modern design yet with those agrarian material choices.” 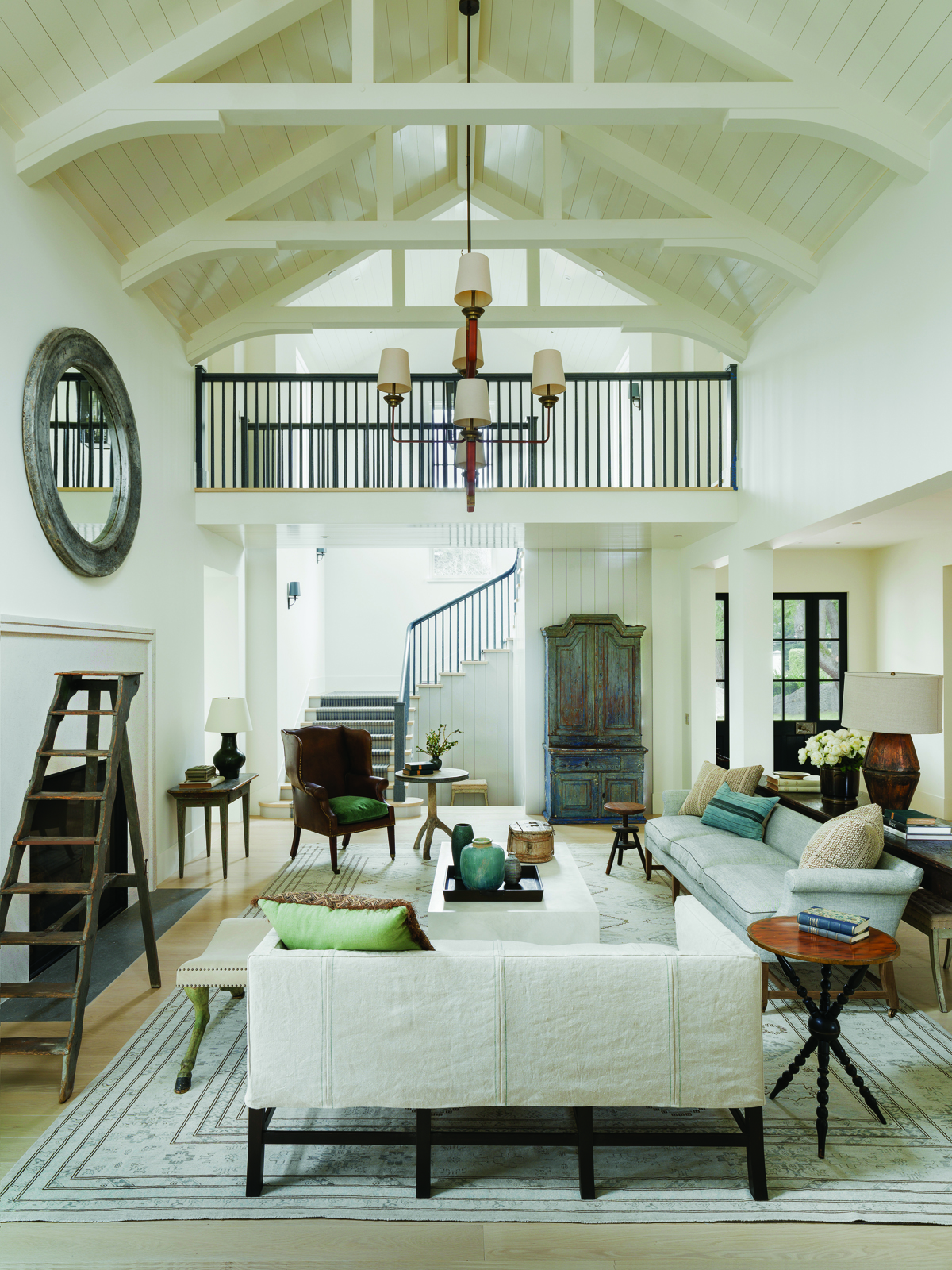 It’s a challenge A-list interior designer Jeffrey Alan Marks has also embraced. Marks is so enamored of the classic farmhouse style that he recently purchased and is renovating a 1924 farmhouse in Montecito, California. However, spec farmhouses that are becoming more common in Southern California often “have that influence but don’t always have that charm,” he says.

Requests to design a modern farmhouse provide a conceptual framework within which Marks can showcase his craft and provide the nuance needed to keep the style from becoming too literal.

“Everybody wanted Tuscan for 10 years, and you know exactly when those homes were built now. The same thing could happen again,” he says. “That’s why I try to create a more eclectic look. Especially with interior decorating, my tastes go to Gustavian, early American, contemporary, English, a little bit of French. It’s all about the mix.”

The home Marks recently finished as interior architect in Ross, California, is a showcase for that eclecticism, with a house full of luxe-yet-livable furnishings and finishes that elevate it beyond the expected. “I step in as interior architect right off the bat and try to add moldings and textures and doors — materials that are more layered than what you might usually find,” he says. “It adds a level of sophistication, steering the interiors away from the Restoration Hardware feel.” 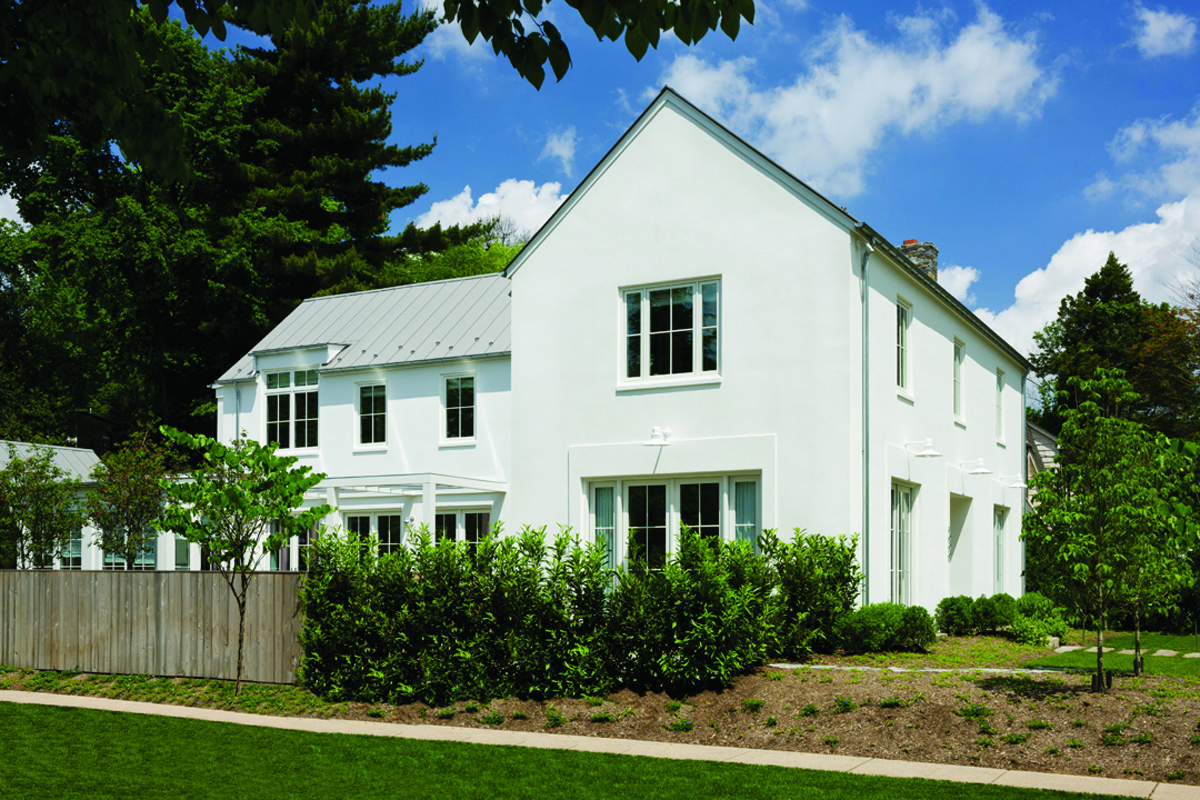 Marks also infuses his designs with subtle colors that add life beyond the typical stark white walls — a strategy shared by Decker. “When referencing the color palette for our Bethesda modern farmhouse, we selected colors found in nature,” she says.

This is another important tactic being used by architects and designers in order to keep modern farmhouses feeling more enduring and less trendy.

“I understand why people want something familiar,” says Holder, of the temptation of following such strict architectural trends, “but it’s important not to fall into fashion. Architecturally, you have problems if your house is dated. You can have that farmhouse influence, with a reverence for the authenticity of the lifestyle that you’re celebrating, say something critically without mimicking, and create something fresh, new and timeless.”