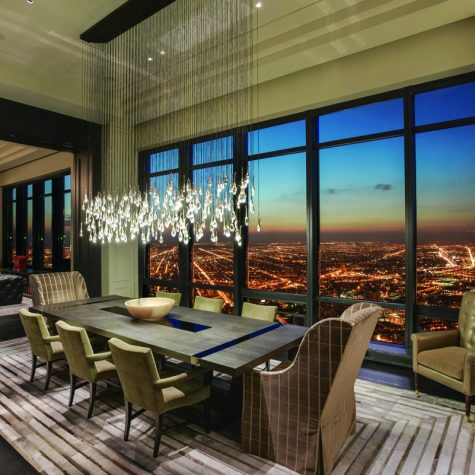 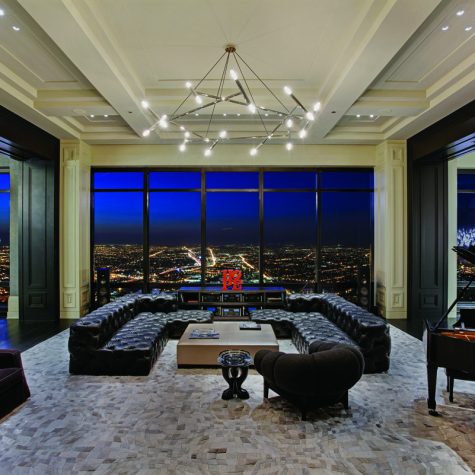 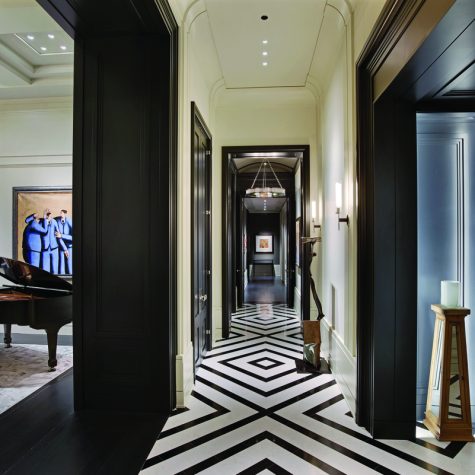 Chicago’s skyline is a canvas of bold architectural statements, a portrait rendered in mile-high towers, historic beaux arts buildings and modernist structures envisioned by the likes of Louis Sullivan and Ludwig Mies van der Rohe. It’s a city that lives in the clouds and among dreams, where the world’s first skyscraper was ever conceived. It’s a city meant to be experienced from both within and from above. 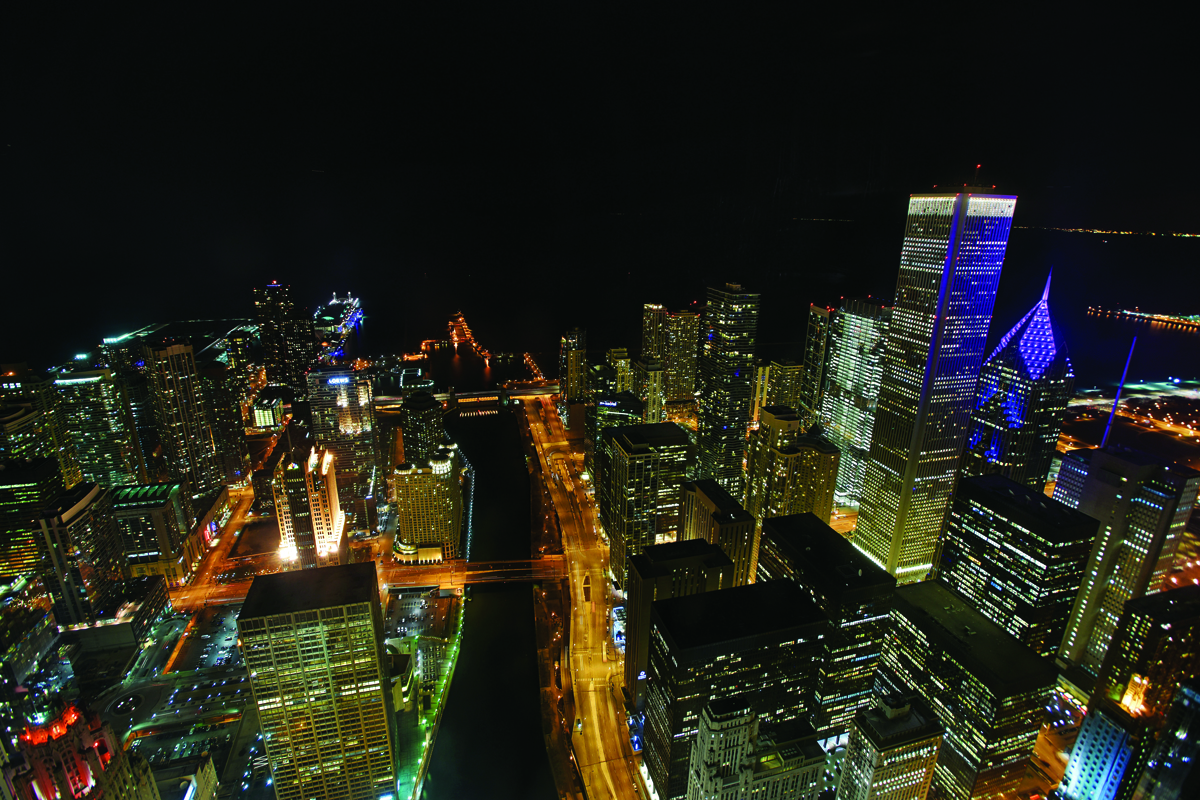 One comes to fully understand this paradox from the vantage point of a glorious penthouse on the 87th floor of Trump Tower, designed by Adrian Smith (the mastermind behind the world’s tallest structure, Burj Khalifa in Dubai). Framed by 12-foot windows, the entire city of Chicago unfolds below, with unparalleled views to the north, east, south and west, glimpses of the Willis Tower, Aqua Tower and Lake Michigan’s seemingly never-ending stretch of blue. When Chezi Rafaeli, affiliated sales associate with Coldwell Banker Residential Brokerage in Chicago, first showed the 6,850-square-foot raw space to Tom and Michelle Gross in 2012, they were captivated upon first sight.

“The views took our breath away,” recalls Michelle. “We couldn’t believe how stunning they were. I remember Chezi saying, ‘Just wait until you see the views at night.’ Plus, we discovered once we moved in that the sunrises and sunsets are equally spectacular. On the Fourth of July, we watch the Navy Pier fireworks on one side of the condo and 100 Village fireworks throughout the city on the other side. It’s mesmerizing.”

Tom, then vice chairman of Eaton in Cleveland, and Michelle, a former accountant, intended to retire in their apartment in the sky. They also wanted the half-floor penthouse to function and feel like a home, to “host children, grandchildren and friends for holidays, parties and events.”

But first, it would require a plan to transform the empty concrete shell into their vision for the future: a contemporary-yet-classic tribute to their favorite city. 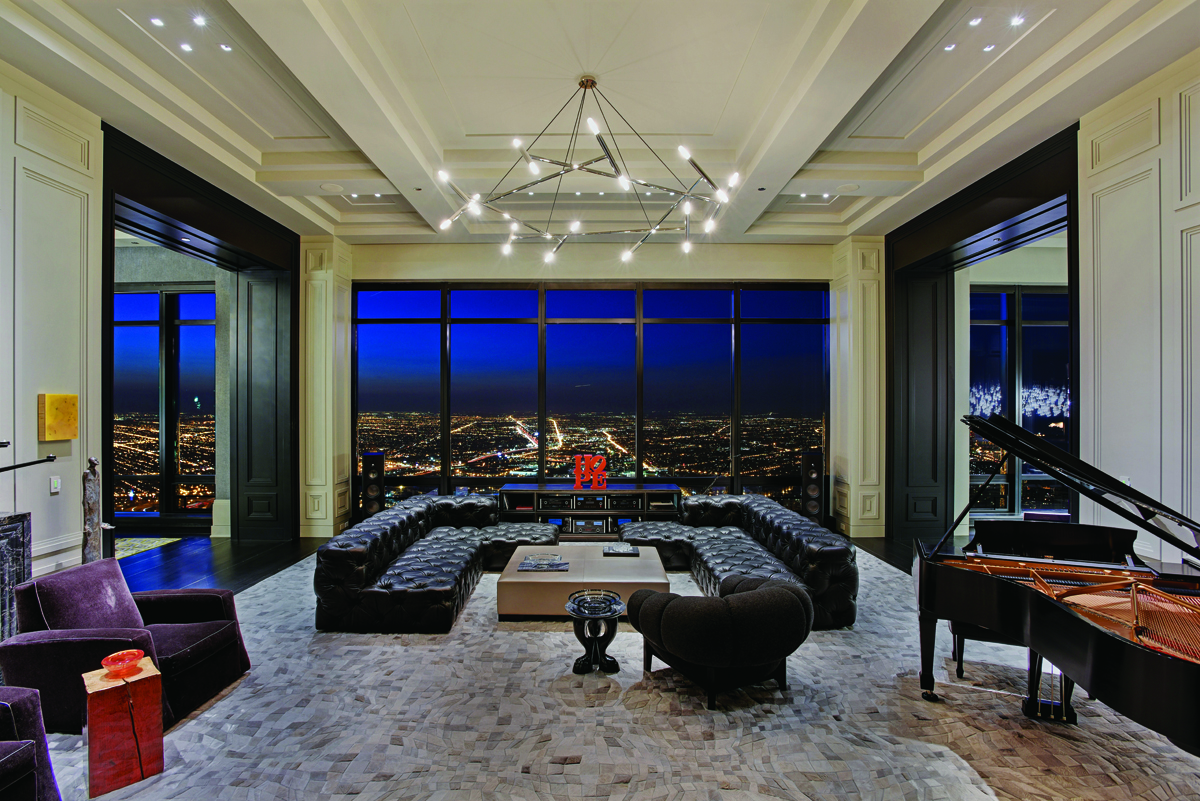 “We’re architecturally oriented,” offers Tom. “I could live in a museum. All of the marble gives it a feeling of permanence, like it’s been here forever.” Adds Michelle: “When you look around Chicago, the buildings are what make it so special. Why not walk into a house and feel like it’s part of the city and part of the surrounding architecture?”

It was an ambitious undertaking. The couple spared no expense — financially or emotionally. Michelle moved full time to Chicago to oversee the project, with Tom visiting on weekends. They hired Victor Dziekiewicz of DesignBridge, an architect they had worked with previously. Dziekiewicz designed a meticulous four-bedroom layout with soaring 16-foot ceilings — a lasting homage to the city.

“The project centered around maximizing the vertical and horizontal spatial qualities of the unit and framing panoramic skyline views,” says Gabriel Ignacio Dziekiewicz, who now heads up DesignBridge following his father’s passing in 2015. 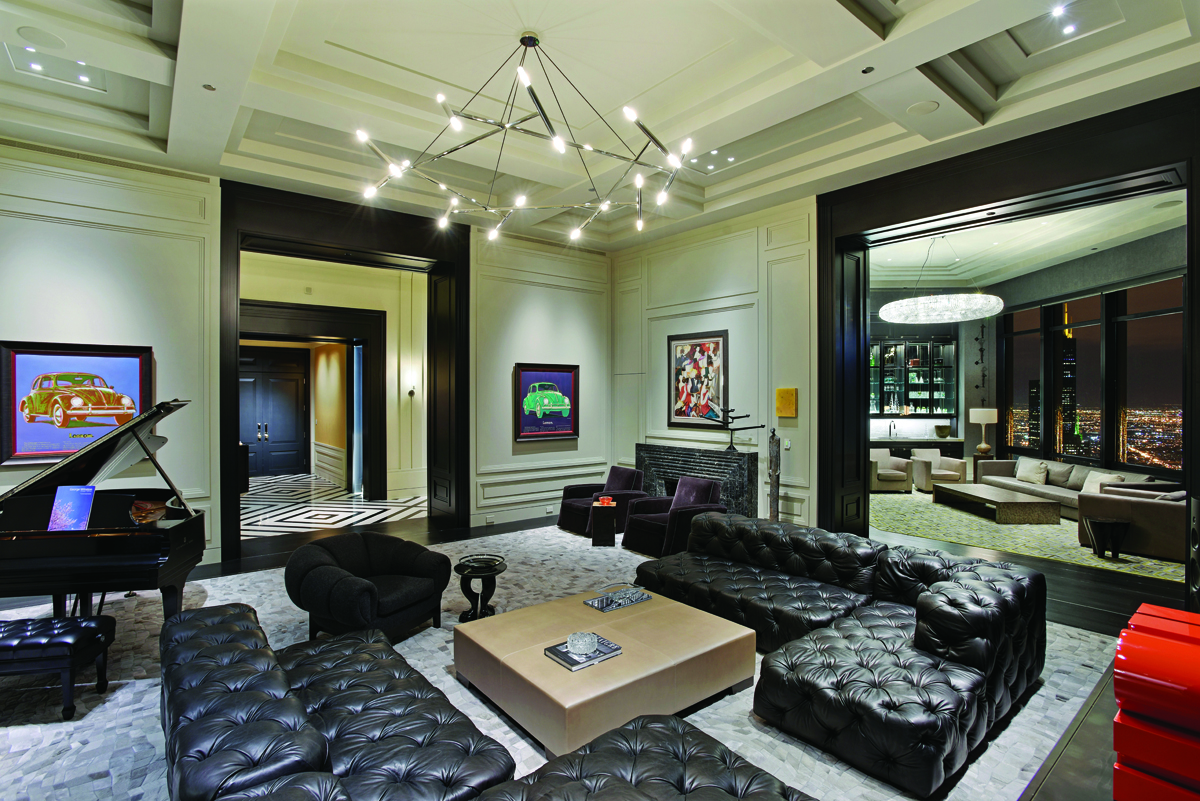 “Views of the city grid form the fourth wall in almost every room of the house. “Almost everything within these walls has been custom designed, which took talent and creativity both in the design process and the implementation,” she says. “To be able to turn a static picture into reality in a living room takes incredible skill and precision.”

The level of detail permeating the residence is the ultimate proof. A large kitchen was angled along the curved glass of the building, so the Gross family could simultaneously prepare a five-star meal on their La Cornue range while taking in views. Entertaining can be moved to the living room or to the wine room. 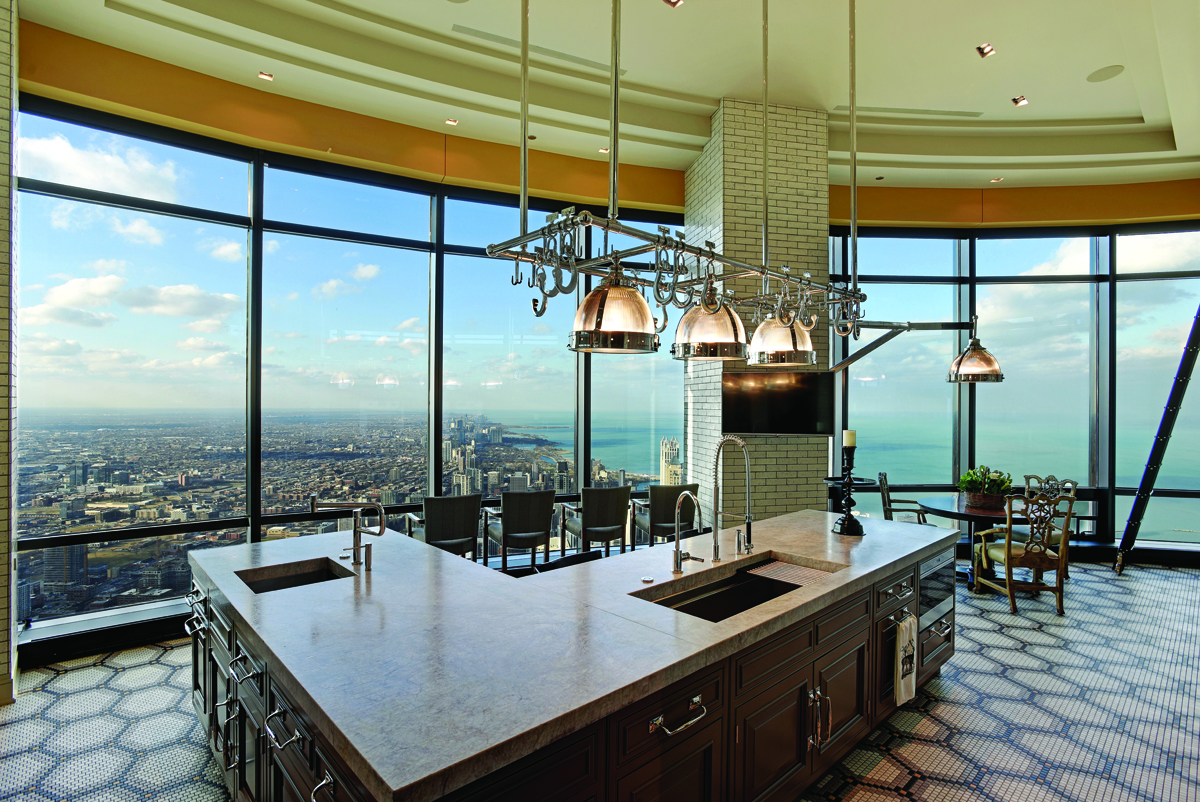 A spacious laundry room with ample storage — something “you’d normally find in a suburban home rather than an urban dwelling,” says Michelle — serves an important day-to-day function. Because maximizing storage space was important to the Grosses, custom-made cabinetry expands all the way to the ceiling in each room, with ingenious custom-built stainless steel ladders in three rooms for reaching the highest points. The cabinetry throughout the entire home is also graced with coordinating custom hardware, which Michelle calls “the jewelry of the home.” 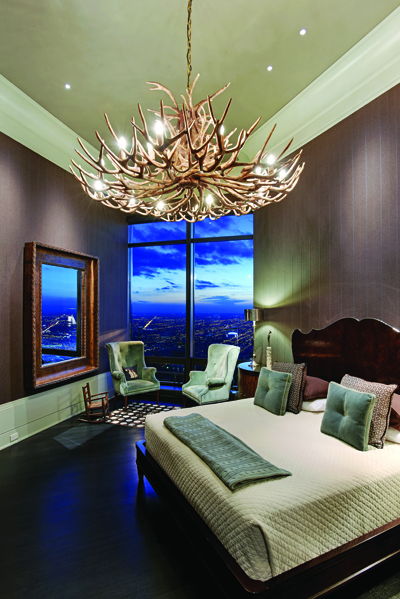 A meticulous lighting plan reveals state-of-the-art recessed LED lighting by Eaton, with decorative fixtures punctuating many rooms, all with the goal of illuminating the interiors and showcasing art to complementary effect. Great care was also taken in selecting flooring that creates rhythm throughout the penthouse. In the foyer, white limestone and black marble are displayed in a stunning symmetrical pattern that flows into ebonized rift-sawn oak flooring in the living spaces. The kitchen and each of the bathrooms reveal their own distinct tile compositions to promote interest and a sense of timelessness. Each bedroom, while united by paint and wool wall coverings, also feels different than the next, thanks to unique art and lighting fixtures. All of it was carefully considered before being executed, says Michelle, to maintain the architectural integrity of the Trump Tower and the many iconic buildings within its surrounds. 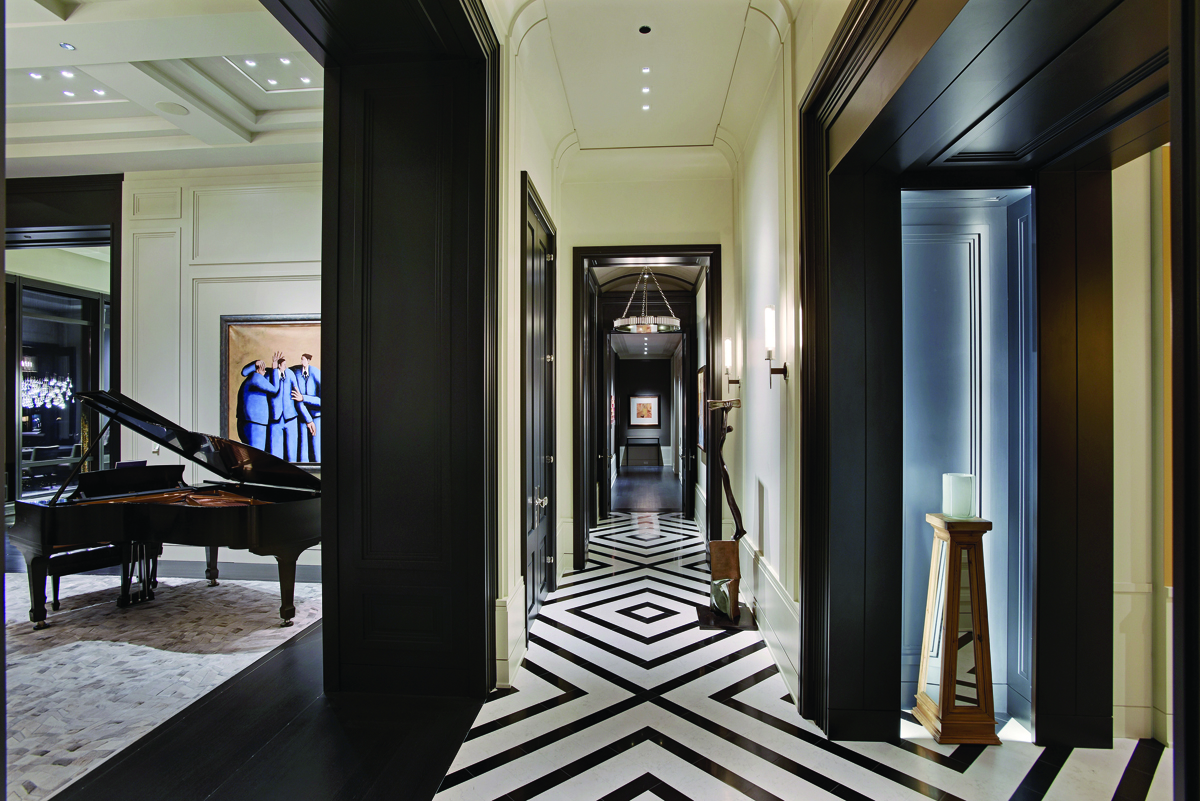 “When you are building a home — and especially when you are building a home 1,100 feet in the sky — you want to create something that feels stable and timeless,” says Michelle. “You want it to be a place where people are going to live for a long time. I would love for the next owner to have that same sense, that living here is special and unique, unlike anywhere else. This home was created with love and permanence.”

A Higher Calling in Chicago

A Higher Calling in Chicago