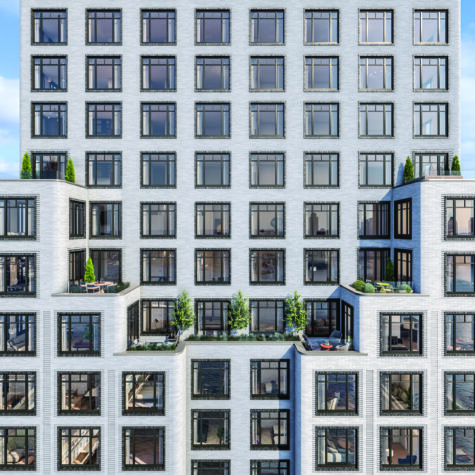 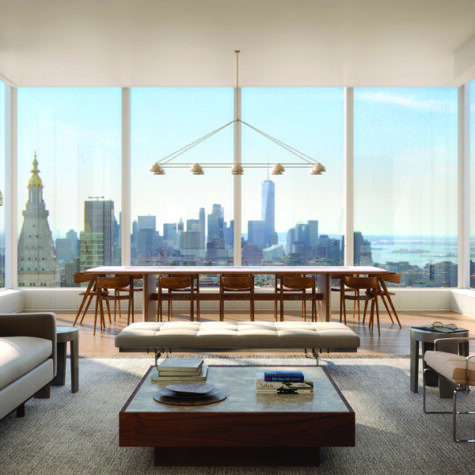 Overlooking a broad expanse of the Pacific Ocean and introduced by a crescent-shaped infinity pool
placed near the home’s entry, The Crescent blends the legendary architecture of Wallace Cunningham with a bluff-top location to create a home that is simply awe-inspiring. Famous for his Southern California architectural designs, perennial AD100 designer Cunningham is said to be moved by water and glass. At The Crescent, he found himself surrounded by water and swept away by the moon (hence the standout pool).

Since the birth of the modern elevator in the mid-19th century, the inspiration to build higher and higher has never waned. And while advanced technologies have made soaring heights more routine, the skyscraper continues to capture our imagination. No longer is there a question of how high we can go, but what we can do to transform height into an elevated art form. The skyscraper was born in the United States — Chicago’s 10-story Home Insurance Building, constructed in 1885, is often cited as the first — and for more than a century, American cities dominated the specialty of high-rise development. But that changed as emerging nations in Asia, Latin America and the Middle East viewed height as status and a validation of economic clout. Currently, only one building in the U.S. (New York’s One World Trade Center) ranks among the world’s 10 tallest buildings. Dubai, the showy multicultural metropolis in the United Arab Emirates, has been a particularly fertile laboratory for high-rise architecture and its graceful, 163-story Burj Khalifa has reigned as the world’s tallest building for an entire decade. An equally playful and flamboyant portfolio of skyscrapers, many designed by American firms, is found in Shanghai, China, but projects in New York, Chicago, San Francisco, and Miami keep the U.S. competitive in this genre.

The Skyscraper Museum in New York City’s Battery Park, located in a space designed by Skidmore, Owings & Merrill (SOM) — one of the world’s preeminent skyscraper design firms — celebrates this art form. Practically within the shadows of SOM’s One World Trade Center and with the entire Manhattan skyline as a backdrop, even the museum’s address makes a statement.

“The Skyscraper Museum is a private, not-for-profit, educational organization devoted to the study of high-rise building, past, present and future,” explains founder, director and curator Carol Willis. “Located in New York City, the world’s first and foremost vertical metropolis, the museum celebrates the city’s rich architectural heritage and examines the historical forces and individuals that have shaped its successive skylines,” she adds.

Explaining the selection of architects was critical to the project, James Linsley, president of GID Development Group, reports, “We wanted three buildings that would each have their own distinct personalities, yet work together to create an iconic collection of residential buildings.” He adds, “Each took cues from the surroundings and embraced the larger vision for Waterline Square to exist as a cohesive unit, while employing their individual flair to make their building true to their defined design philosophy.”

“Waterline Square embodies the concept of place-making, which I think we’ll see more of in the future as we see more people working remotely and looking for access to lifestyle-oriented amenities and services without having to leave their building,” says Linsley. “With architecture by these three exceptional firms, the buildings of Waterline Square illustrate how skyscrapers don’t have to exist in isolation, but instead can create a cohesive and vibrant neighborhood that embraces its surroundings,” says the developer. 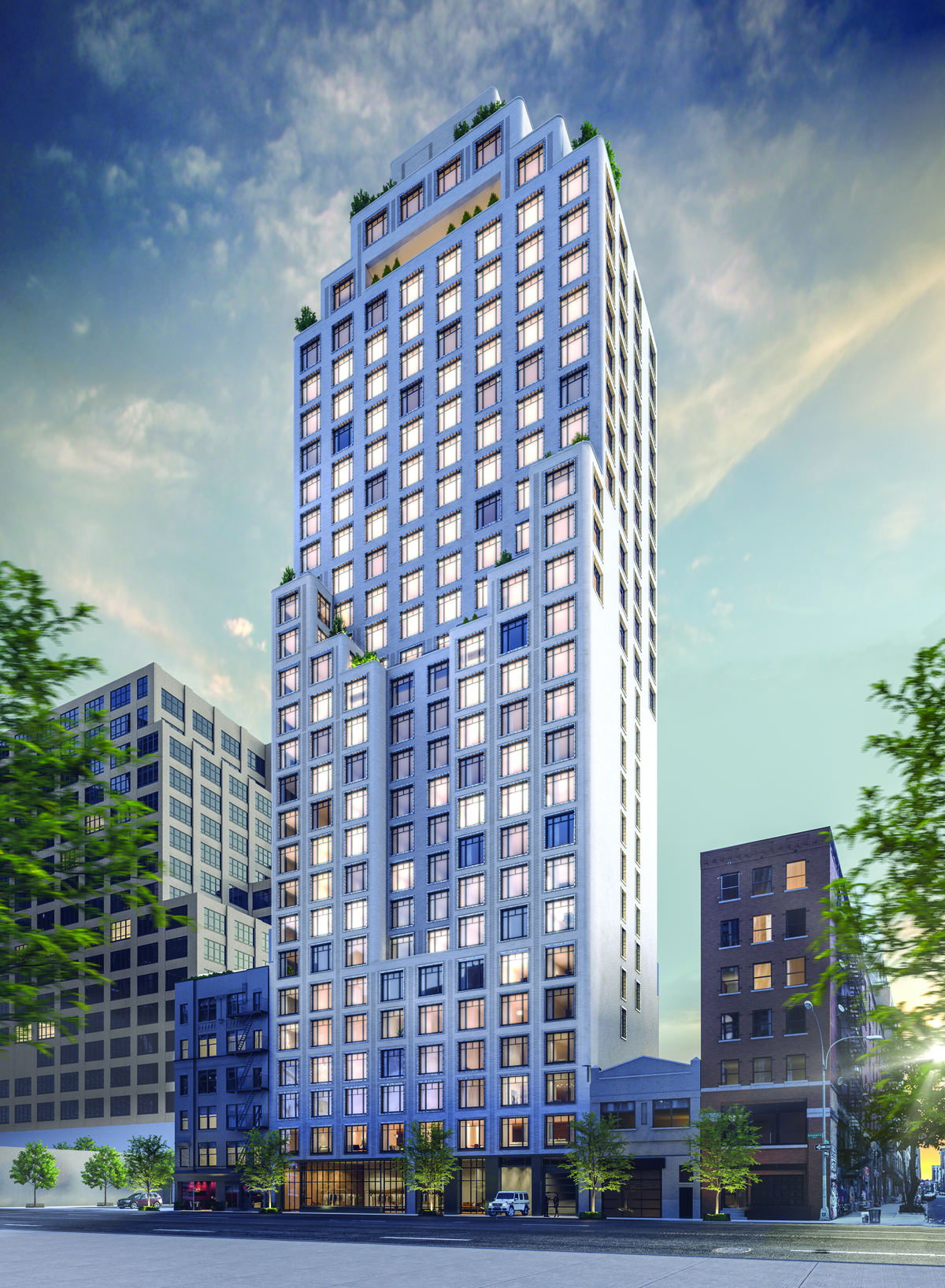 FXCollaborative’s gracefully cantilevered 77 Greenwich, the glass-sheathed Madison House by Handel Architects and the classically inspired Greenwich West — all new to the Manhattan skyline — bring different sensibilities to luxury living in New York. More importantly, each project suggests that height, per se, is only one dimension that determines the artistic value or desirability of a skyscraper.

Dan Kaplan, senior partner at FXCollaborative, takes a measured approach to skyscraper design, insisting that an obsession with height has its limitations. “Contrary to what one imagines, the experience of these ‘supertalls’ from within can be isolating and, ironically, boring,” he posits. “So, for me, the optimal height is high enough to see lots of sky and a long view, but low enough to see the street, the detail of other buildings, and feel part of the city,” he says, suggesting that the 42-story 77 Greenwich strikes the perfect balance.

“For a variety of reasons — convenience, excitement, opportunity — people are flocking to cities and, as a result, cities are becoming denser,” reports Kaplan. “Building vertically is the natural — and I would add, the more sustainable — response to the situation. However, high-rises cannot merely be the most efficient, cost-effective way to pack people together; they need to uplift us.” Stating the ideal skyscraper needs to create a refuge from density and a connection to nature, the architect maintains, “The future of the skyscraper is a blurring between the built and natural worlds,” and cites the landscaped roof deck atop 77 Greenwich as an example of that harmony. 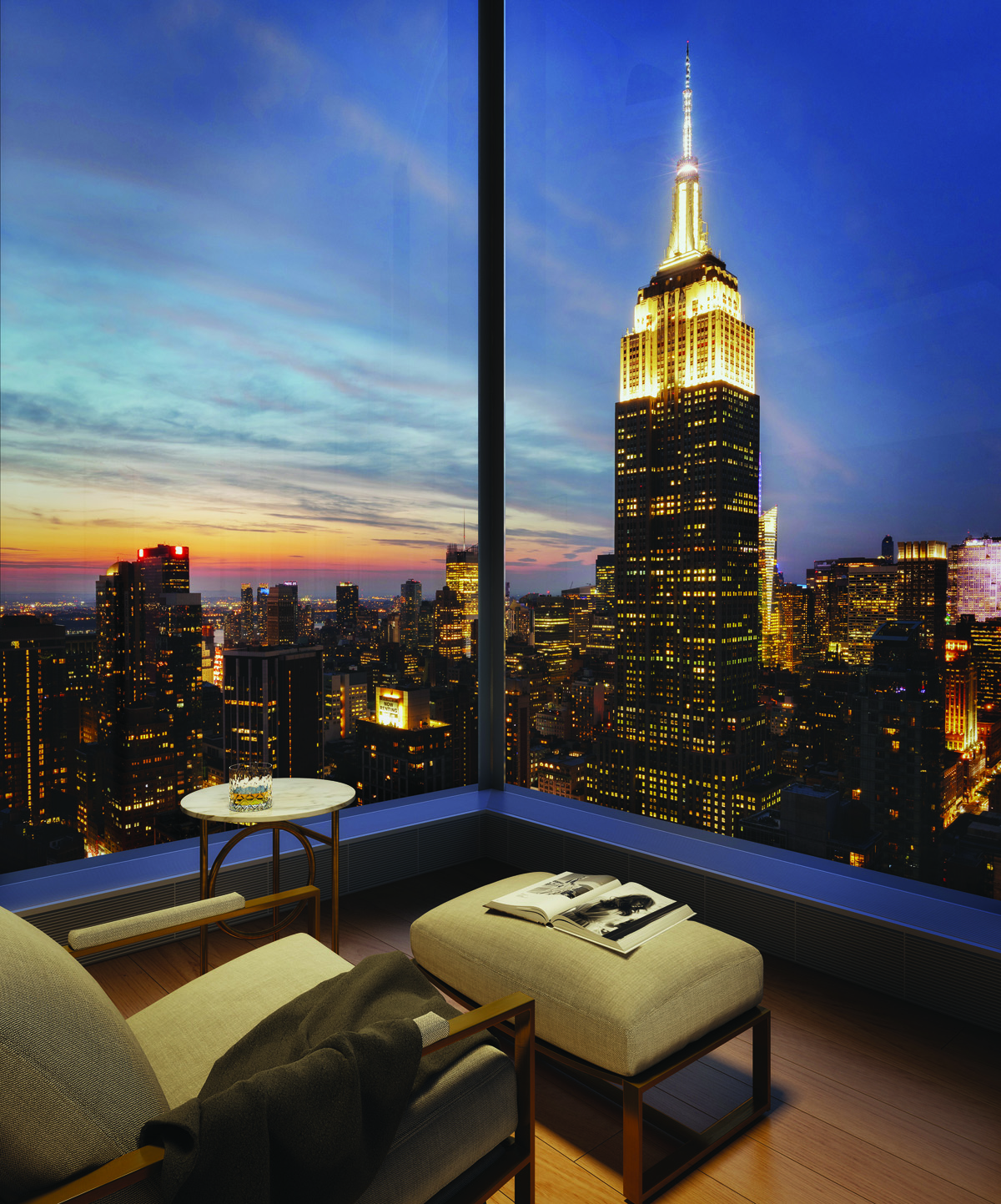 Evan Stein, president of JD Carlisle Development, the developer of Madison House, states, “How you utilize a building’s location and capitalize on its height through smart design choices is what really matters.” While the 62-story building is the tallest residential tower in Manhattan’s trendy NoMad district, Stein insists it is the project’s floor plate design, structural engineering and façade that set it apart. “Designed from the inside-out, Madison House is a decagon featuring 10 corners, a rare building layout that ensures all of the homes have at least one column-less corner window, with great natural light and fantastic city views,” says the developer. Certain they will never cease to captivate the public, Stein suggests, “Skyscrapers are symbols of technological progress and innovation, and are the ultimate grand gesture.” 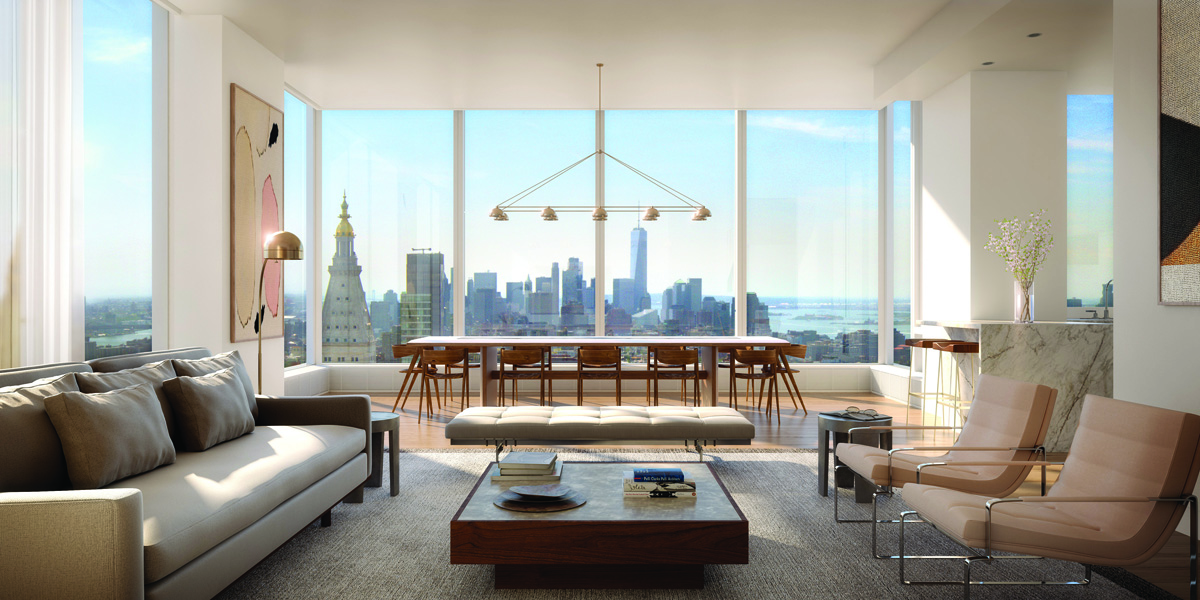 “We feel one of the most important design elements of a tower is its relationship with the site and its context,” states Françoise Raynaud, founding partner of Loci Anima Architects, the Parisian firm that designed Greenwich West. “That is an essential part of construction in a sensitive city where there’s a notion of uniqueness rather than branding and globalization,” she explains. “The relationship with the ground and the city is primordial, even more so than height, which is really tributary to context,” says partner Jonathan Thornhill, who cautions, “We shouldn’t build in New York the way that we build in Paris or Tokyo.”

“Towers grow from the inside as if pushed by a vital energy in search of sunshine, creating a connection between inside and out, with the natural elements, with the sky, with the light,” says Raynaud, a woman challenging the male-dominated specialty of high-rise architecture. “It’s so important for a residential tower, where the concepts of home and wellbeing are the essence of good design,” states Thornhill, maintaining that Greenwich West fulfills that promise to its inhabitants. 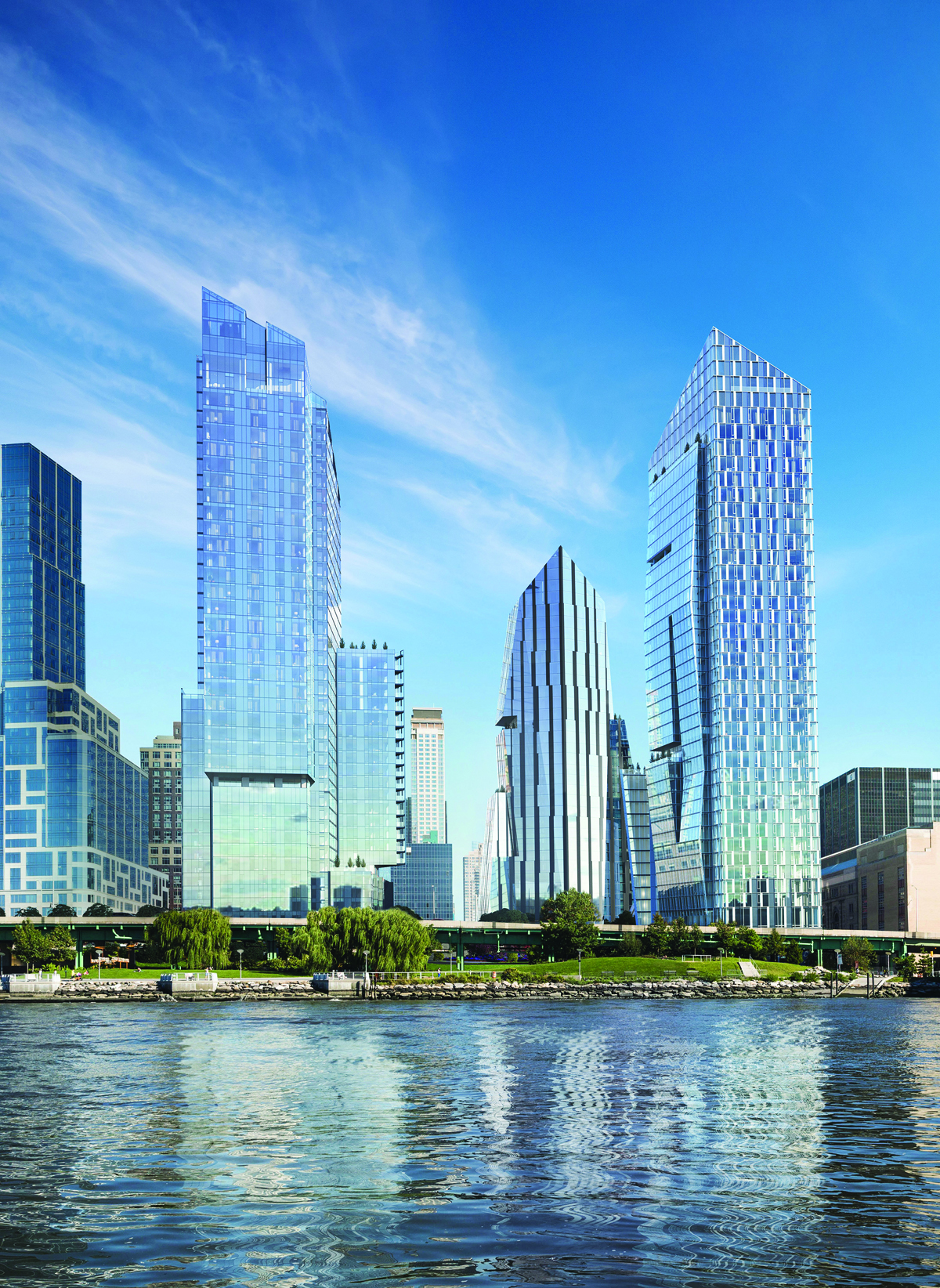 One of the current dominant trends in high-rise design in New York is the ultra-thin residential tower. There are at least a dozen of these, some comprising “Billionaires’ Row” along the southern edge of Central Park. These buildings’ slender profiles maximize their development capacity while providing awesome views for their elite residents, but some nostalgic New Yorkers believe they are ruining the city’s signature skyline. “These celebrity spires are headline grabbers, in part for their ‘starchitect’ designers, but even more for their stratospheric condo prices,” reports Skyscraper Museum founder Willis.

“The intense demand for New York real estate and its relative security in world markets has led one expert to dub the sky-high condos ‘strong-boxes in the sky,’” says Willis, who is also an adjunct associate professor at Columbia University’s Graduate School of Architecture, Planning and Preservation. She has noted their uber-rich buyers — Latin American petro-billionaires, Russian industrial barons and local hedge fund managers — have attracted scorn from some New Yorkers, with the super-slender buildings labeled by critics as “towers of inequality.” 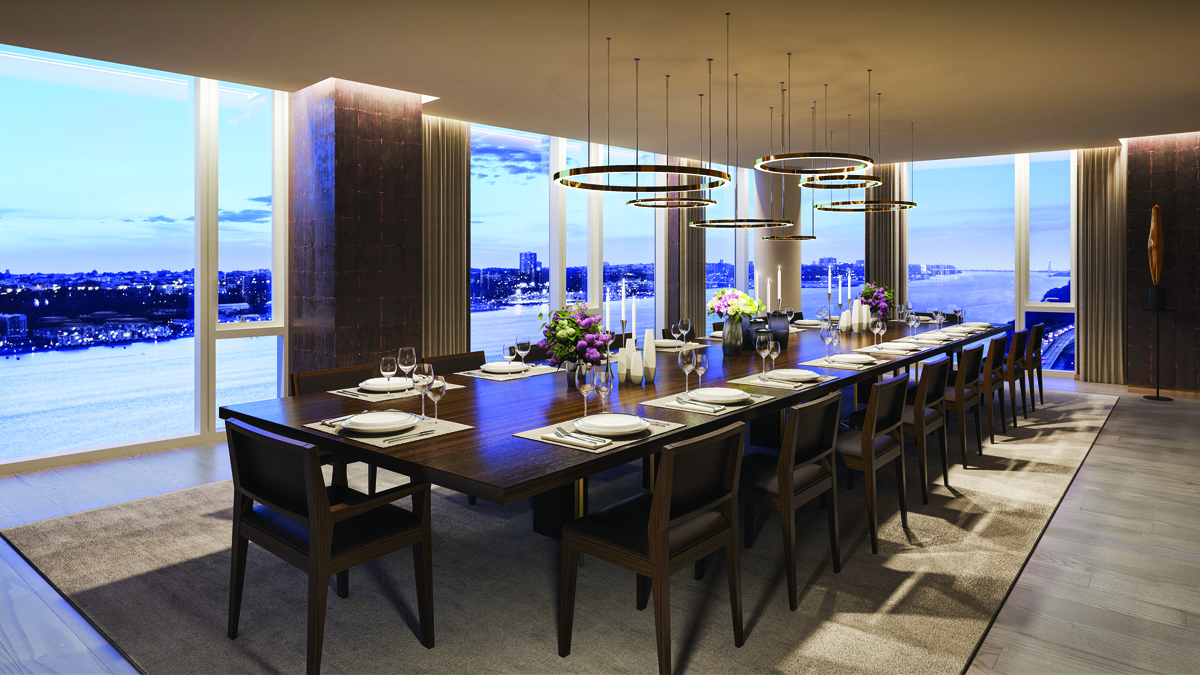 “Sophisticated engineering has made these spindles possible, but it is soaring condominium sales prices that explains their proliferation,” says Willis, who reports $100 million price tags have become routine. Status-conscious branded design matters to developers, insists the professor, which explains why so many Pritzker Prize-winning architects are associated with residential projects in Manhattan.

“Some of these towers are exceptionally tall, but to be clear, it is not height that characterizes the type, it’s slenderness,” explains Willis. The small floor plates in these buildings lift as many units as possible to extraordinary heights, facilitating the views buyers covet, while ensuring that many units occupy an entire floor. In one tower identified by Willis, there were just 60 apartments spread over 80 floors.

Unlike some architecture critics, Willis does not accept the notion that these towers are symbols of a cultural demise, and states, “If we truly value the richness and history of Manhattan’s skyline, we should celebrate these extraordinary 21st-century skyscrapers.” But, for those who are not enthralled with the latest generation of New York high-rises, they can be reassured the city’s skyline offers a constant connection between past and present. 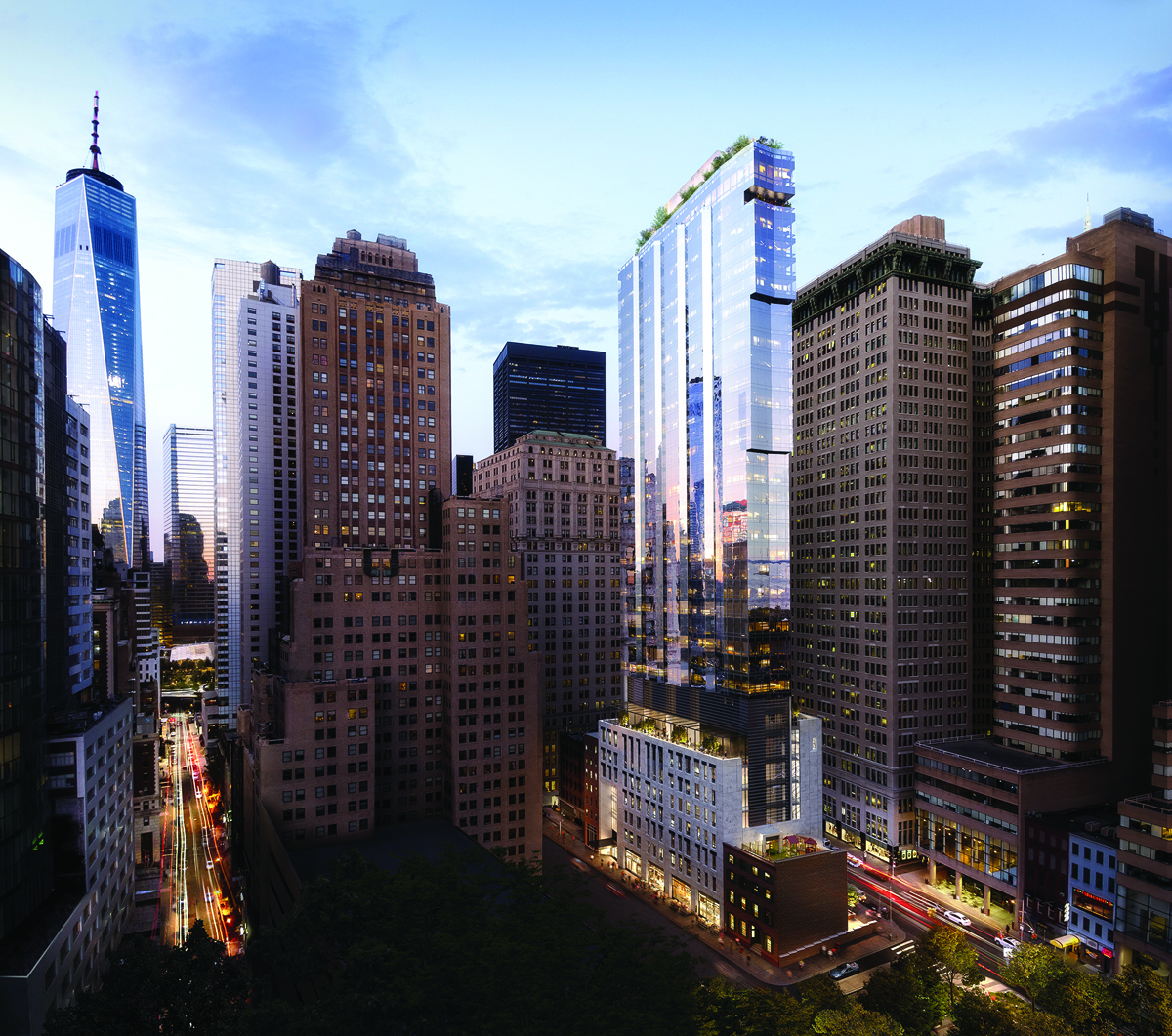 Landmarks like Manhattan’s Woolworth Building — Pulitzer Prize-winning architecture critic Paul Goldberger called the 1913 Neo-Gothic structure the “Mozart of Skyscrapers” — are being converted to luxury condominiums, thereby sustaining their glory. “To many people growing up in New York, the Woolworth Building has a magical quality,” says Alex Saltzman of Alchemy Properties, which transformed the skyscraper’s top 30 floors into The Woolworth Tower Residences. “They view architecture as art and now they have an opportunity to live in a work of art,” he adds. 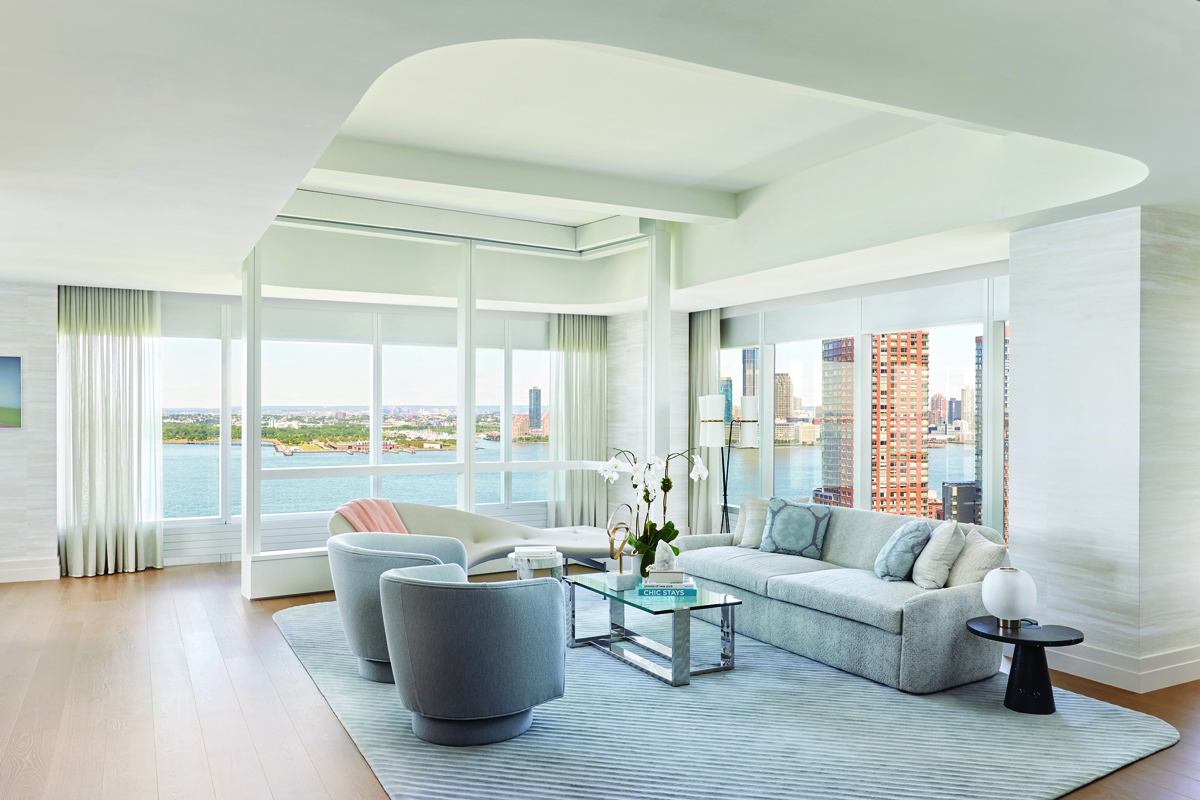 Chicago architect Jeanne Gang has earned a reputation for graceful, elegant skyscrapers that present the illusion of movement without looking contrived, and her Studio Gang is responsible for significant projects in cities across the country and internationally. Now under construction in Chicago is Studio Gang’s 101-story Vista Tower, whose gently waving blue glass façade mirrors the constant presence of Lake Michigan. At San Francisco’s MIRA residential tower — with 40 percent of its units “affordable,” it is not strictly for technology billionaires — Gang has evolved the city’s cherished bay window heritage into a unique spiraling façade.

Clearly, record-breaking height is not the only dimension that matters. “There’s a fascination with height and the image of power and success it conveys,” concedes architect Françoise Raynaud of the enduring charisma of the skyscraper. But with factors like climate change ultimately making height less important, she advises, “A new page in skyscraper design is opening.”