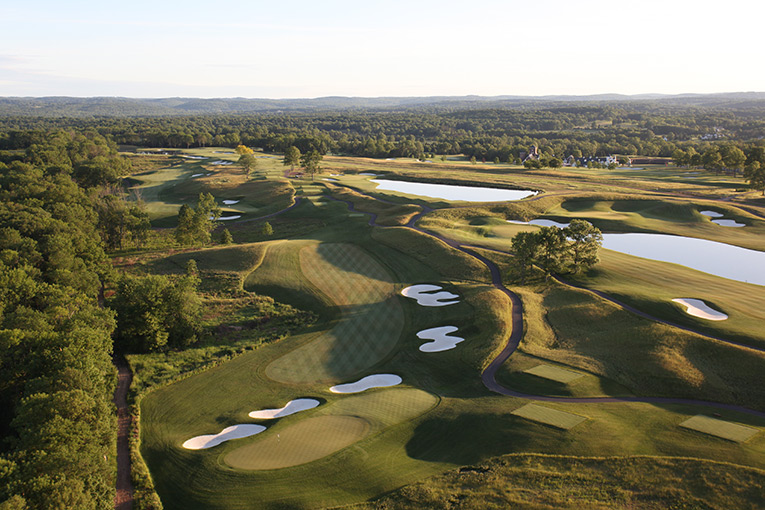 Palmer. Nicklaus. Norman. Some names are just synonymous with the game of golf. Tom Fazio, who has landed on Golf Digest’s list of America’s 100 Greatest Golf Courses and Golfweek’s list of America’s Best more times than any other golf course architect, is another name that instantly inspires visions of the gilded age of golf. His 45-year-old nephew Tom Fazio II, however, has also been quietly making a name for himself in the high-end golf world. As the third generation of golf architects in the Fazio family (his father, Jim Fazio, is also a golf course designer), he might be the quieter of the two Toms—but don’t mistake his laidback T-shirt-and-shorts disposition for lenience on the fairways. His courses are some of the most challenging in the world—just ask anyone who has played the second course of Trump National Golf Club in Bedminster, N.J.!

“We are similar in the ways we sculpt the land to look very natural,” he says of his legendary uncle. “However, I’m not as nice as him because I tend to design a little tougher course. I like smaller greens, deeper green side bunkers and a bit more of a premium on the shot.”

Known as a conscientious designer with an eye for detail, Fazio II schedules no more than two projects annually in an effort to give his golf courses all of his attention from start to finish. “It’s about quality, not quantity,” he says—a philosophy that is near to our hearts at Previews Inside Out. Just in time for spring, we recently caught up with Fazio II to ask him about his family’s history of designing some of the nation’s most iconic fairways, his unique design process and of course, his favorite courses.

Previews Inside Out What is it like being part of the Fazio family golf legend?

Tom Fazio II The best part is the worldwide recognition. The worst, or I would say the most challenging part, is having a lot to live up to. I have tried hard to be very selective in the projects I have taken to keep the Fazio brand at its highest level.

Tom Fazio II Several major determining factors have changed how courses are designed, including the use of modern heavy equipment, construction and maintenance equipment technology, today’s playing equipment and even economics. I think we are much more maintenance-efficient minded today than 20 years ago. We are trending towards creating more naturalized areas that need fewer resources. However, I find it very interesting how many people are for a “green initiative” until it is in their backyard. Homeowners and Home Owners Associations (HOA) seem to be the biggest hurdle. This will be an uphill battle until they see the beauty in a minimalistic design and more native environment.

Previews Inside Out Are there certain locations or climates that you believe are most conducive to the type of courses you like to design? How so?

Tom Fazio II I love the Northeast. I like the type of cool season grasses that grow in that region: Bent, Blue Grass and Fescue.

Previews Inside Out In your opinion, what’s the single-most important design feature of element needed to create a complete luxury golf experience?

Tom Fazio II Mother Nature. But plenty of Ben Franklins comes in at a close second! Spending enough money can create a wonderful setting, completely changing the environment. But it is never as good as Mother Nature.

Previews Inside Out Tell us a little bit about your design process. Where do you normally start? Where do you like to end?

Tom Fazio II The design always starts with a solid routing plan, understanding the existing contours of the land and how to exploit the features. Not only does it need to work operationally, but also in the spirit of what the owner and designer are trying to achieve. Ultimately, I like to end up with a very natural, strategic course that is fun to play.

Previews Inside Out In your opinion, what makes a “good” golf course “great”?

Previews Inside Out What, if any maxims or mottos, do you design by?

Tom Fazio II To conform to what nature is giving you with great diversity. It’s more of a guiding principle more than a philosophy.

Previews Inside Out What’s the most memorable hole you’ve ever designed?

Tom Fazio II It’s hard to say. Most recently, the 12th hole at Trinity Golf Club in South Korea has over 30 meters in elevation change; the hole has quite a few random fairway bunkers that allow you to choose multiple lines of play. It is certainly one of the more dramatic holes we have ever fit.

Previews Inside Out What are some of your favorite golf features that you frequently return to in your work?

Tom Fazio II Strategy is certainly my main consideration. I try hard to stay away from holes or greens that you “just play to the middle.” I do this by creating risk/rewards shots due to angles and hazards.

Previews Inside Out When you look at all of the golf courses you have designed over the last 20 years, which course are you most proud of?

Tom Fazio II Trump National in Bedminster, N.J. and Quail Valley in Vero Beach, Fla.—because of the people I was able to work with and learn from on those projects. I am very open to any ideas and never preconceive what I want. I let a hole evolve, but shape the strategy. Trinity Golf Club in South Korea also tops the list, due to the scope of work.

Previews Inside Out If you could live on any golf course in the world, where would you live?

Tom Fazio II Cypress Point on Monterey Peninsula would be my first choice, followed by a tie between Seminole Golf Course in South Florida and Shinnecock Hills Golf Club in Southampton, N.Y.