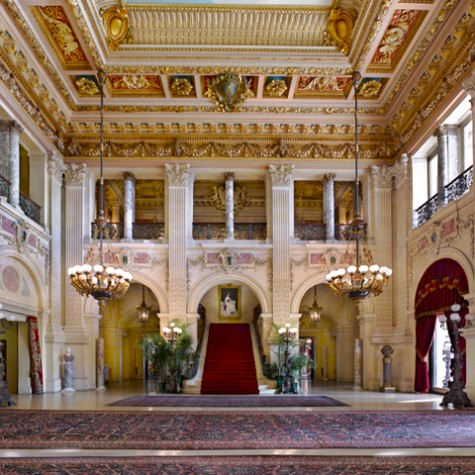 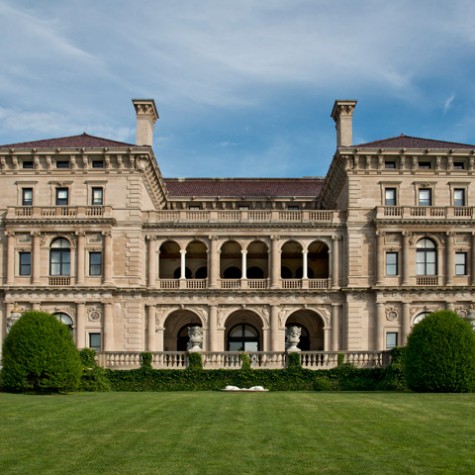 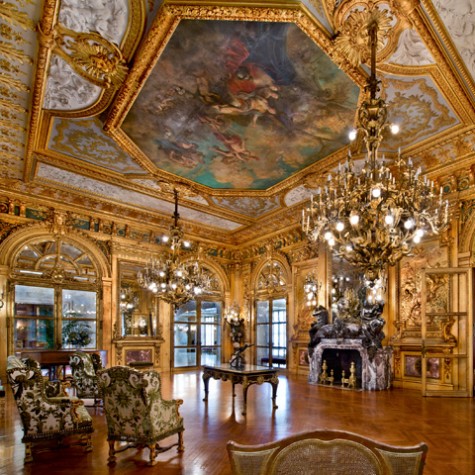 Newport, Rhode Island. Legends come in many forms here—the 300 years of living history, the rocky cliffs tumbling wildly into the Atlantic surf and the dozen or so Gilded Age mansions that have come to symbolize an era of opulence. The “City by the Sea” was a popular New England summer retreat for America’s wealthiest families—names that are legendary in their own right—the Vanderbilts, the Astors, the Dukes.

These families would spend around six weeks of the year in their palatial estates, racing their yachts in the bay, watching polo matches and throwing lavish summer soirees at night. The mansions—some as large as 138,300 square feet—have been declared “architectural marvels” and for good reason: even though they are more than 100 years old, they remain open year-round as tourist destinations with more than 900,000 visits annually. There is The Breakers, built by Cornelius Vanderbilt II in 1895 and modeled after Italian Renaissance palaces with over 70 rooms, and Rosecliff, built for a Nevada silver heiress and modeled after the Grand Trianon at Versailles. And of course, there is Chateau-sur-Mer, one of America’s greatest Victorian houses, among many others.

To commemorate our Legends issue, Previews® Inside Out spoke to Trudy Coxe, chief executive officer and executive director of The Preservation Society of Newport County, to give us a taste of the gilded life of Newport. 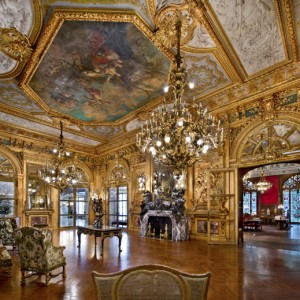 Previews Inside Out Why was Newport such a popular gathering place for the wealthy during the summer?

Newport actually became a summer destination in the late 18th century—and in the early 19th century, there were many southern families who came to town to escape oppressive heat and periodic epidemics that marred southern summers. They favored Newport for its scenic beauty and healthy seaside climate. There was a little bit of a shift around the time of the Civil War, and you get more northerners coming to town, from Boston, New York and Philadelphia. But really, it becomes the preeminent leisure resort for New York society and the Gilded Age elite beginning in the late 1870s and 1880s. They came for the same reasons people come today—natural beauty, sea breezes—but also because it was the place “to see and be seen” at lavish parties and exclusive clubs during the summer months.

Previews Inside Out Who were some of the famous names who frequented these mansions?

The Vanderbilt family, whose taste for grandeur epitomizes the Gilded Age; the Astor family, who dominated New York society for generations; novelist Edith Wharton; and First Lady Jacqueline Bouvier Kennedy, who attended events at many of the houses, are among the many who frequented Newport.

Previews Inside Out Which mansion is the most indicative of the Gilded Age lifestyle?

Marble House, Rosecliff, The Elms and The Breakers all represent the Gilded Age—but each is unique. Marble House is very deliberate in its use of historic architecture and symbols of the arts, to characterize Alva Vanderbilt as a patron of the arts and as a powerful woman. Rosecliff epitomized the social aspects of the period, serving as luxurious backdrop for some of the era’s most elaborate parties. The Elms housed a world-class art collection and had a magnificent French-style formal garden. And The Breakers was a bravura display of rich materials and grand spaces. To some degree, they all were built as stage sets for entertainment and represent the wealth and power of their owners. 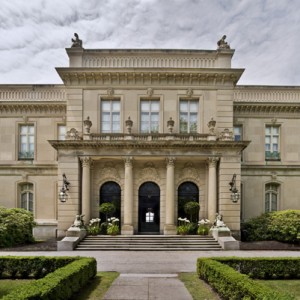 The Elms. Gavin Ashworth photo courtesy of The Preservation Society of Newport County.

Previews Inside Out Which mansion is the most indicative of the Gilded Age lifestyle? Many of the mansions have rooms inspired by European landmarks—like 16th century Italian palaces and the Trianon at Versailles. Why do you think that is?

The houses themselves followed European models. The Americans who built these houses were modeling themselves after European royalty and aristocracy. In the decades following the Civil War, America experienced the full financial impact of the industrial revolution. In many cases, Americans were now wealthier than the old aristocratic families of Europe. But because the United States had, in some ways, begun as a struggling provincial wilderness full of speculators, religious dissidents and political radicals, Europeans still looked down on Americans as crude and uncultured. To be respected internationally, Americans felt they needed to dress, act and live the part of members of a noble class. They drew on the recognizable styles of European architecture and collected art with great European provenance to show the world that modern America—the nation that their companies and investments had helped build—had arrived on the international stage, and now they demanded respect. 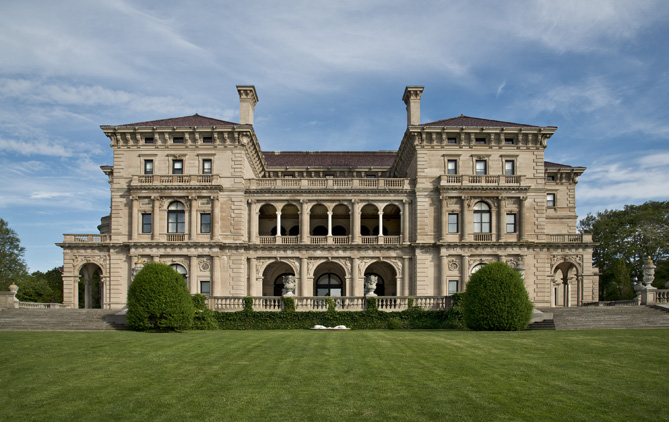 The Breakers. Gavin Ashworth Photos Courtesy of The Preservation Society of Newport County.

Previews Inside Out Where did the majority of the action—all of those glamorous summer galas—generally take place?

Lots of places. The great hotels, which once stood along Bellevue Avenue and near Catherine Street, were gathering places for what we might designate as the “middle and upper-middle classes.” The Newport Casino was a center for tennis, tea, lectures and theatre. Exclusive parties and balls happened in private homes—and many people hosted dinner parties. There was the great tradition of the afternoon drive—taking grandly decorated coaches drawn by magnificent horses out along Bellevue Avenue and Ocean Drive to display one’s finery, enjoy the fresh air and “be seen.” And of course, the Preservation Society’s houses themselves were the settings for many grand parties. 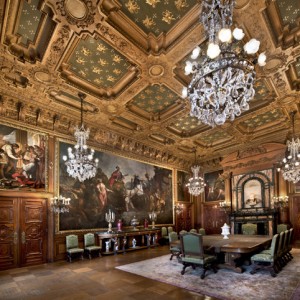 There were many! On August 12, 1857, William S. Wetmore hosted a “fête champêtre,” or a country picnic, at Chateau-sur-Mer for 3,000 people in honor of entrepreneur and philanthropist George Peabody, who was visiting from England. Guests were entertained by three orchestras, and the grounds were filled with gazebos, Turkish-style tents and dance platforms. The immense task of preparing the food was done by renowned African-American caterer George Downing. The table decorations included ice statues of George Washington.

The Berwind family’s housewarming party at The Elms in August 1901 was the major event of that social season. Four hundred people filled the house and spilled out the French doors from the ballroom onto the terrace and grounds. Among the guests were actress Ethel Barrymore and socialite Alice Roosevelt, the daughter of President Teddy Roosevelt. Two orchestras played inside, with another out in the garden. The driveway was illuminated with hundreds of tiny white lights, and the entrance hall was transformed into a rose garden, with trees and vines. Its most interesting feature was the monkeys that were allowed to roam free on the grounds, mimicking a practice frequently used to enliven 18th-century French entertainments.

In August 1904, Tessie Oelrichs staged a Bal Blanc (White Ball) at Rosecliff. Everything from the house itself—designed by legendary architect Stanford White and clad in glazed terra cotta tile to ensure it stayed perfectly white over time—to the floral decorations to her own lace dress was pure, dazzling white. White swans swam in the fountain on the lawn, and a mock fleet of specially constructed white ships floated at the base of the cliffs. Even by Newport standards, the Bal Blanc was extravagant.

Previews Inside Out What are your favorite stories associated with The Breakers?

For all its opulence, The Breakers was really a family home. Generations of Vanderbilt children rode their tricycles around the Great Hall and even slid down the grand staircase on silver serving trays. Gertrude Vanderbilt, the daughter of the builder Cornelius Vanderbilt II, was married in the Music Room of The Breakers, to Harry Payne Whitney, a wedding that was documented by the popular press then much as Hollywood weddings are today. 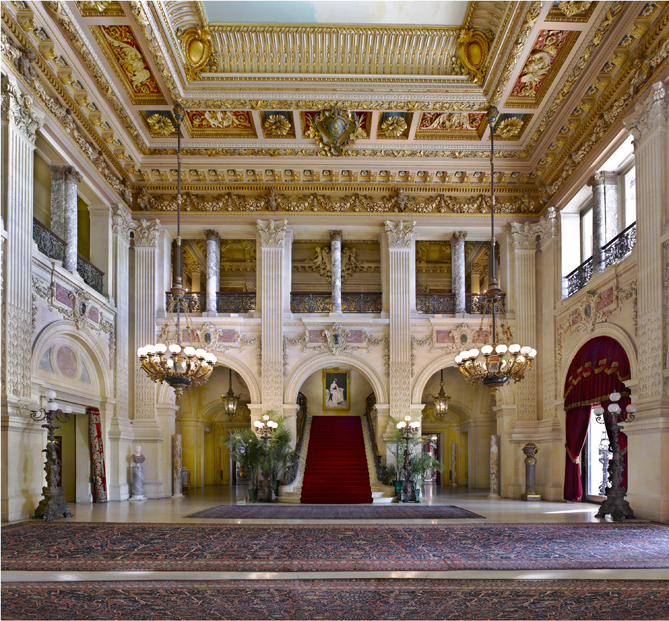 This year, the Preservation Society is featuring a revised audio tour at Marble House, which sheds new light on the “self-made myth” of Alva Vanderbilt. Can you tell us a little bit about the house and how it related to Alva Vanderbilt’s life?

Alva and her husband, William K. Vanderbilt, were great supporters of the arts. They hired one of the most famous architects to design a house based on the Petit Trianon at Versailles, and Alva wanted it to be her “Temple to the Arts.” She put her great collection of medieval art there, along with a collection of French royal portraits. But later, it became a stage for her to champion social causes, primarily suffrage for women. So as Alva herself changed over time, so did the ways in which she used and viewed Marble House.

What has been the biggest challenge in keeping the integrity of these properties alive?

The cost of the upkeep, research and conservation required to preserve these properties and share their stories with our guests is staggering. Their builders spared no expense, but we don’t have quite the same resources as they did! Our museum guests are important contributors to the cost of protecting, preserving and presenting these buildings and the American story that they represent, but we also depend on the generous philanthropy of people who care as much as we do about telling that story to provide us with the resources we need to do the job.

Why is it so important to preserve the Newport mansions?

Thanks to the efforts of some visionary preservationists in the mid-20th century, Newport is today one of the most historically intact cities in North America, making it a unique lens through which we can experience great events in American history and a globally significant cultural resource.

Gilding the Coast: Inside the Newport Mansions

Gilding the Coast: Inside the Newport Mansions