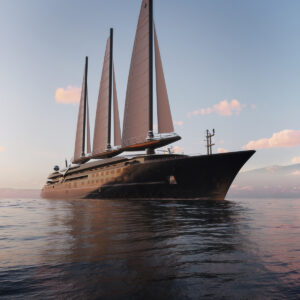 The very first Orient Express sailing ship and “the largest sailing ship in the world” will set sail in 2026 and push “the limits of the possible,” according to a press release recently unveiled by French hospitality group Accor and Chantiers de l’Atlantique, a leader in the construction of cruise ships.

Sébastien Bazin, Chairman and CEO, Accor, promises the ship will “offer unparalleled service and spaces with refined designs, reminiscent of the golden age of legendary cruises” – not unlike the luxury trains for which the Orient Express name is best known. Part innovation in luxury and part innovation in yachting sustainability, the 220-meters-long Orient Express Silensea will boast three SolidSail rigs, a revolutionary 1500m2 unit sail propulsion system and a hybrid propulsion running on liquefied natural gas (LNG).  Laurent Castaing, Managing Director, Chantiers de l’Atlantique, calls it “the benchmark ship in environmental terms” and “a sailboat of the future.”

A Legend that Began on the Sea

Inspired by the golden age of the French Riviera, Orient Express Silenseas will recall the time when writers, artists, painters, sovereigns and movie stars discovered between Monte-Carlo, Saint-Tropez, Cap d’Antibes, Cannes and its Croisette, a refinement tinged with carelessness and joie de vivre, calling for escape. The ship comes by its history honestly. In 1867, founder Georges Nagelmackers discovered his inspiration while boarding transatlantic ships from Europe to America. On these ships, he found luxurious suites for travel filled with sumptuous decor, the social life of the restaurants and a unique atmosphere of the lounges, libraries and places of entertainment. This experience of luxury sea travel would later lead to the launch of his legendary train, the Orient Express, in 1883. 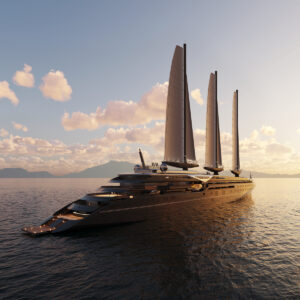 Bringing together the best French talents, theOrient Express Silensea will “celebrate the Art of Travel” thanks to the vision of architect Maxime d’Angeac, who designed the interior layout and the decorations, and the Nantes design agency, Stirling Design International, who designed the exterior lines. The vessel will have 54 suites measuring an average area of ​​70 square meters, including its monumental Presidential Suite of 1,415 meters square meters (including 530 square meters of private terrace). Two swimming pools, two restaurants and a speakeasy bar “will add to the quintessence of luxury.” For entertainment, guests will be invited into the Amphitheatre-Cabaret and a private recording studio. Spa treatments, meditation sessions and stopovers for cultural discovery allow a complete escape from the mundane world.

Sailboat of the Future

Orient Express Silenseas will sail using sails with a revolutionary “SolidSail” technological design: three rigid sails with a surface area of ​​1,500 meters each will be hoisted on a balestron rig, with 3 tilting masts culminating at more than 100 meters high, able to provide up to 100% propulsion in suitable weather conditions. For a more environmentally friendly voyage at sea, a hybrid formula will combine wind power with a state-of-the-art engine running on liquefied natural gas (LNG) and will allow the use of green hydrogen once technologies accepted for an ocean-going passenger ship.

More information is available at www.orient-express.com.