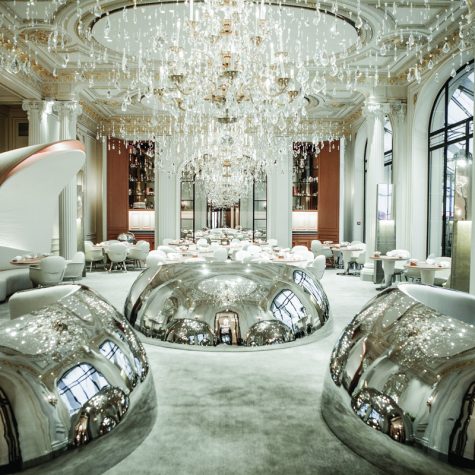 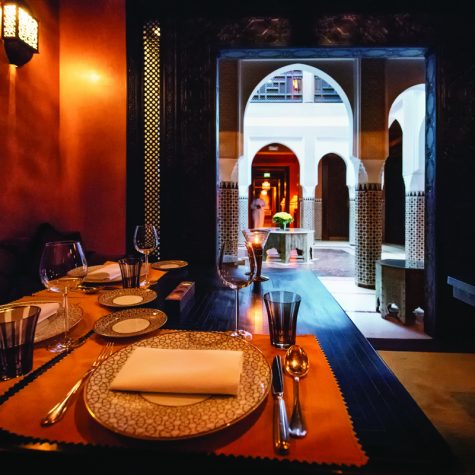 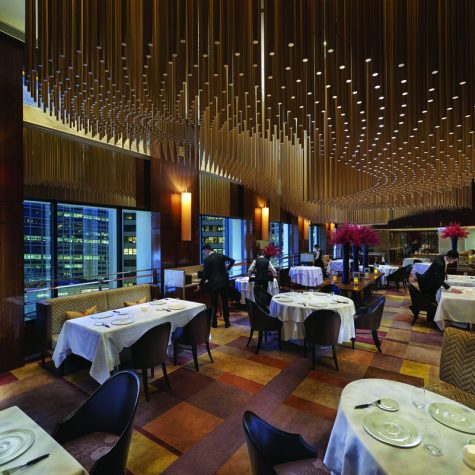 Not long ago, the last place savvy tourists — travelers passionate about food, that is — would choose to eat was the dining room of their hotel. The freestanding restaurants in the neighborhood were almost certain to offer more exciting or authentic cuisine. But times have changed, and in cities around the world some of the best restaurants can be accessed without a taxi or metro ticket. 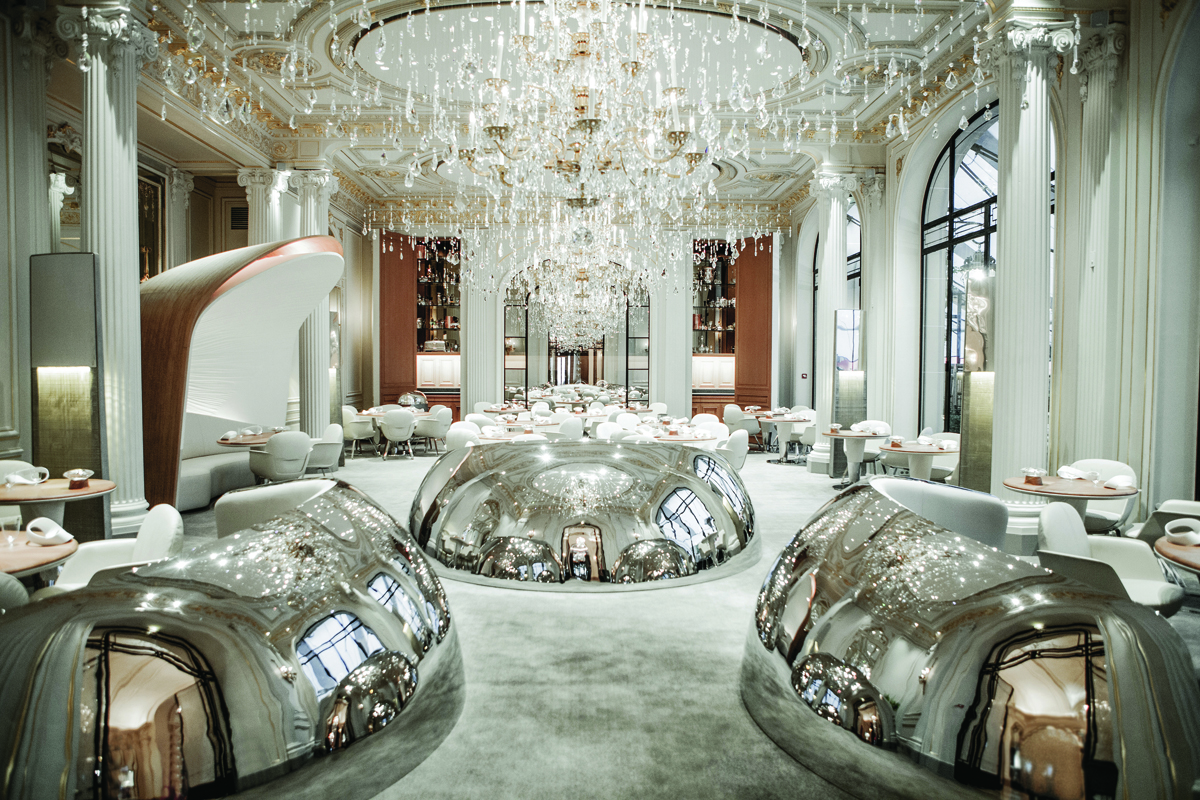 With rising costs for food, labor, insurance, and even amenities like linen and floral arrangements, many accomplished chefs simply do not have the means to independently operate fine dining restaurants. Hotels, which rely on buzzworthy chefs to enhance their reputations, have become natural culinary partners. In some cases, signing a celebrity chef can be beneficial to a hotel, even if the restaurant is ultimately unprofitable. For their part, chefs can concentrate on their craft without being distracted by accounting, legal issues or public relations.

With the intense pressures of maintaining three precious Michelin stars, the ultimate honor in the restaurant business, many chefs in Paris enjoy the nurturing environment of a luxury hotel, and some of Paris’ top restaurants are located in the city’s grand hostelries. Alain Ducasse at the Hôtel Plaza Athénée is one such place, as is Le Cinq at the Four Seasons George V. And for pure opulence, it is hard to beat the two-star Le Meurice in the hotel of the same name.

Not all notable Paris hotel dining rooms feature the gilt, crystal and silk of Le Meurice, and less pretentious boutique hotels are attracting exciting young chefs. Le Comptoir du Relais in the Relais Saint- Germain, a small Left Bank hotel, was among the first contemporary bistros specializing in high-minded but affordable gastronomy, now popular in the City of Light. The dining room is not opulent — tables are in a small space or spill onto the sidewalk — but the cooking of chef Yves Camdeborde is renowned.

Anna Brooke, who covers the Paris dining scene for Frommer’s Travel Guides, reports, “If you take Le Comptoir out of its hotel context, it’s part of Paris’ bistronomie movement featuring simple, creative cuisine at reasonable prices.” And while she suggests Le Comptoir may be in a class by itself, she can rattle off a number of boutique hotels offering affordable gourmet restaurants.

Brooke reports two major trends in hotel dining occurring in Paris: first, a return to basics, showcasing exceptional ingredients with less manipulation; and second, an embrace of eclectic influences. “As clients and chefs travel around the world, many restaurants are mixing traditional French ingredients with exotic ones from Asia,” says Brooke, who cites Matsuhisa at Le Royal Monceau as Paris’ first Japanese-Peruvian restaurant. In décor, the 16-year Paris resident observes a break from classic French settings to more daring modern aesthetics.

London’s culinary scene has emerged as one of the world’s most exciting — jokes about British food are becoming obsolete in the capital — as premier chefs from around the world have taken cover in the city’s fine hotels. In fact, France’s prolific Alain Ducasse earns another trio of Michelin stars at The Dorchester, a grande dame of London hotels, while homegrown talent includes three-star Dinner by Heston Blumenthal at the Mandarin Oriental. 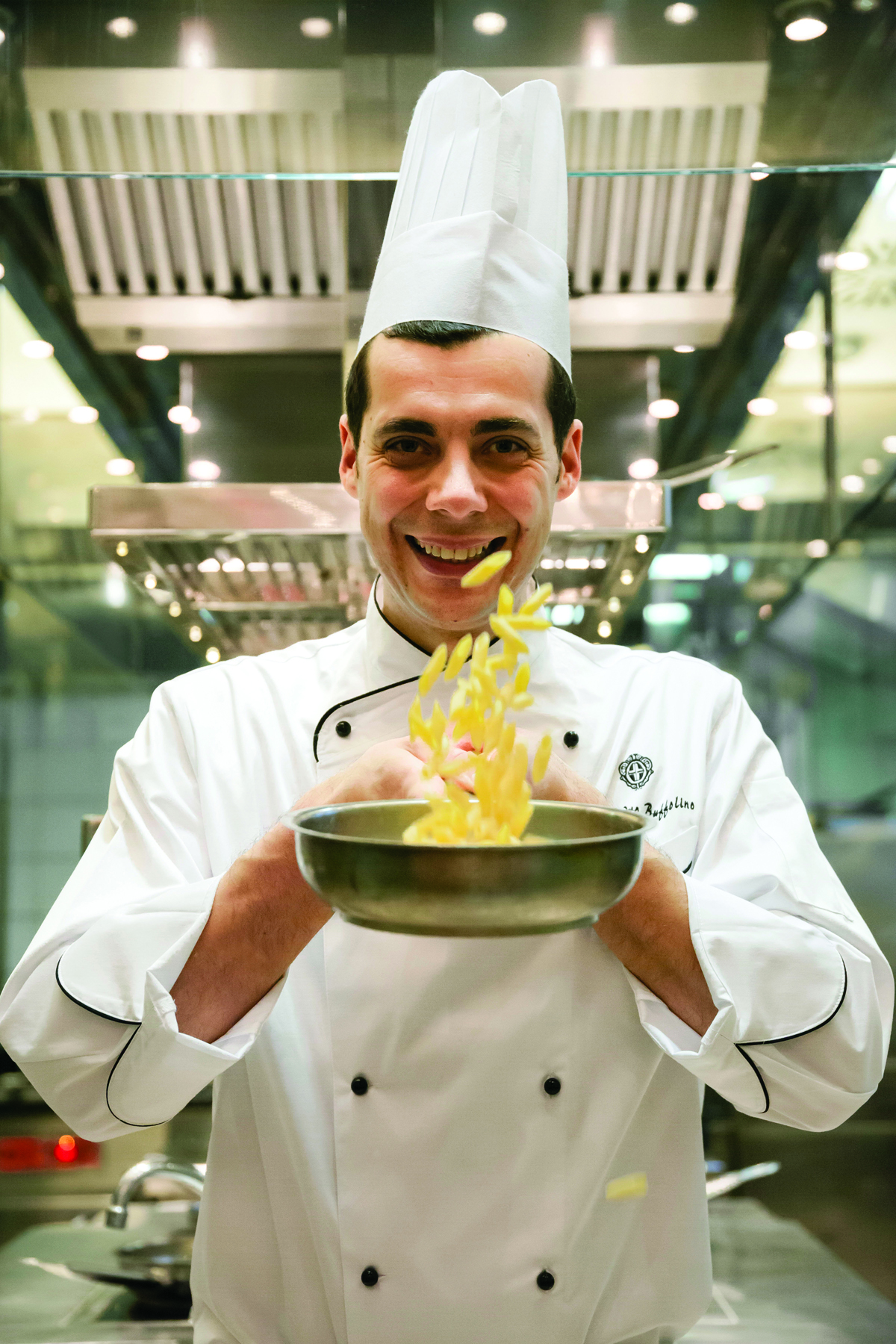 At the Plaza Athénée, and to a lesser degree at The Dorchester, Ducasse prepares a lighter French cuisine showcasing seasonal local produce, a trend gaining momentum across Europe according to chef Alessandro Buffolino of Milan’s Hotel Principe di Savoia. “Increasingly, guests show a passion for light cuisine and innovative ways of cooking,” he says, although he admits French haute cuisine remains fashionable. “Fusion cuisine is also popular, with iconic Asian ingredients such as lemongrass or soy in traditional Italian dishes,” adds Buffolino.

A favorite of traveling celebrities is Rome’s Hotel Hassler atop the Spanish Steps, and its sixth-floor restaurant Imàgo occupies what was once a rooftop terrace. Guests have panoramic views of the city’s iconic landmarks while enjoying the contemporary Italian cuisine of chef Francesco Apreda, who turns out imaginative dishes like red onion and foie gras risotto with spicy coffee powder.

Roberto E. Wirth, owner and general manager of the Hassler, states, “Hotels hire famous chefs to get the maximum promotion of their properties and restaurants,” but insists his hotel’s relationship with Apreda is not so calculated or cynical. “Things were different at the Hassler, as our chef became famous and well-known worldwide through his work with us,” explains the hotelier.

Wirth believes that a single distinguished restaurant is insufficient for a world-class property. “I’m convinced that exclusive hotels should have at least two restaurants offering different types of cuisine: a gourmet dining room and a more traditional restaurant to satisfy all guests,” he says. In addition to Michelin-starred Imàgo, the Hassler houses Salone Eva, offering more traditional Roman cuisine and an Italian riff on afternoon tea.

In Hong Kong, some of the finest hotel restaurants are not downstairs, but upstairs, such as the elegant Petrus, overlooking Victoria Harbor from the 56th floor of the Island Shangri-La. Earning two Michelin stars is Amber at the city’s Landmark Mandarin Oriental. Richard Ekkebus, the restaurant’s Dutch-born culinary director, is a recipient of the Ordre national du Mérite, a prestigious award presented by French President Hollande. 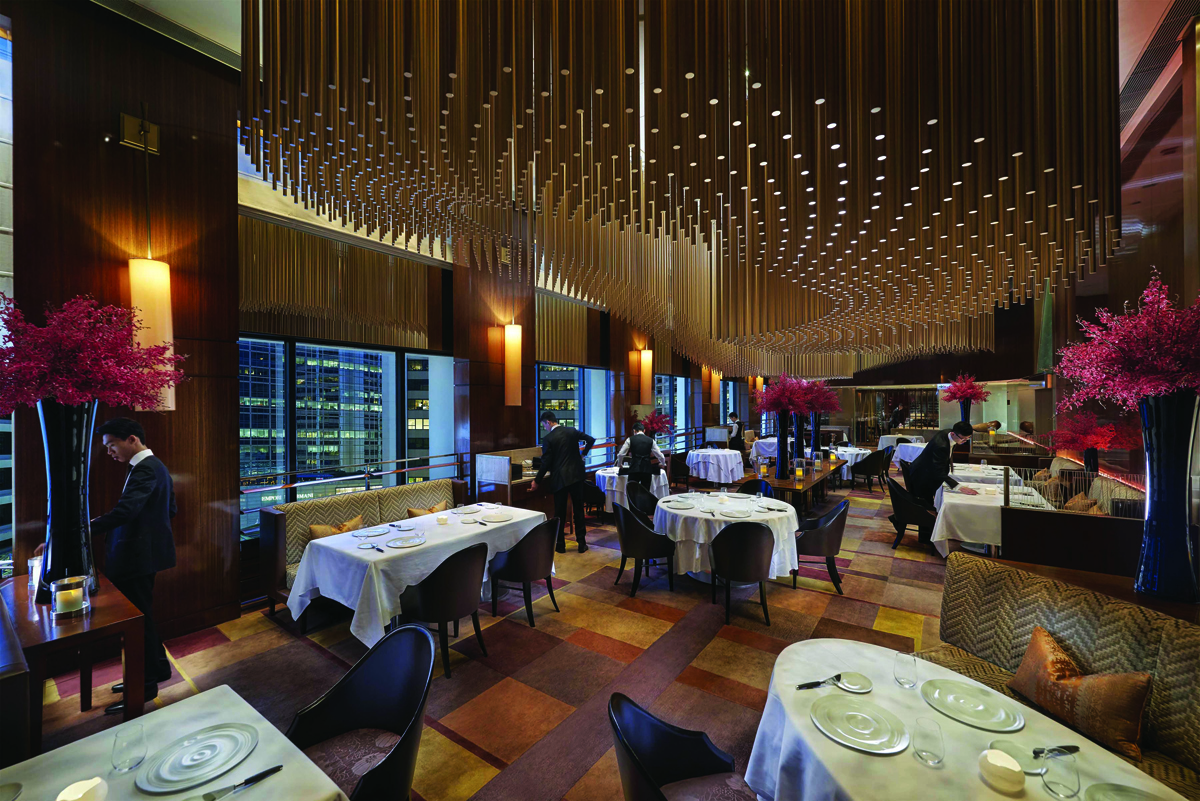 “I think the main objective when starting Amber is that we never wanted it to be perceived as a hotel restaurant, reports Ekkebus, who adds, “We wanted an independent freestanding restaurant feel, with its own website.” And while the chef believes that philosophy has greatly contributed to the success of Amber, he concedes that being located in a Mandarin Oriental property has been beneficial, particularly given the organization’s culture of extraordinary service. He also demonstrates a level of commitment no less intense than if his name was on the building. “I’ve been personally involved from a year prior to the opening until now, 12 years down the line, continuously refining and fine-tuning our products and services,” explains Ekkebus.

The modern, Asian-accented French menu at Amber includes dishes like sea urchin and lobster gelée with cauliflower purée and caviar, and Miyazaki wagyu beef with dulse-red cabbage slaw and horseradish-pepper berry emulsion. Conceived by New York designer Adam Tihany, the dining room is strikingly modern, but quite sophisticated, much like Ekkebus’ artful plating. 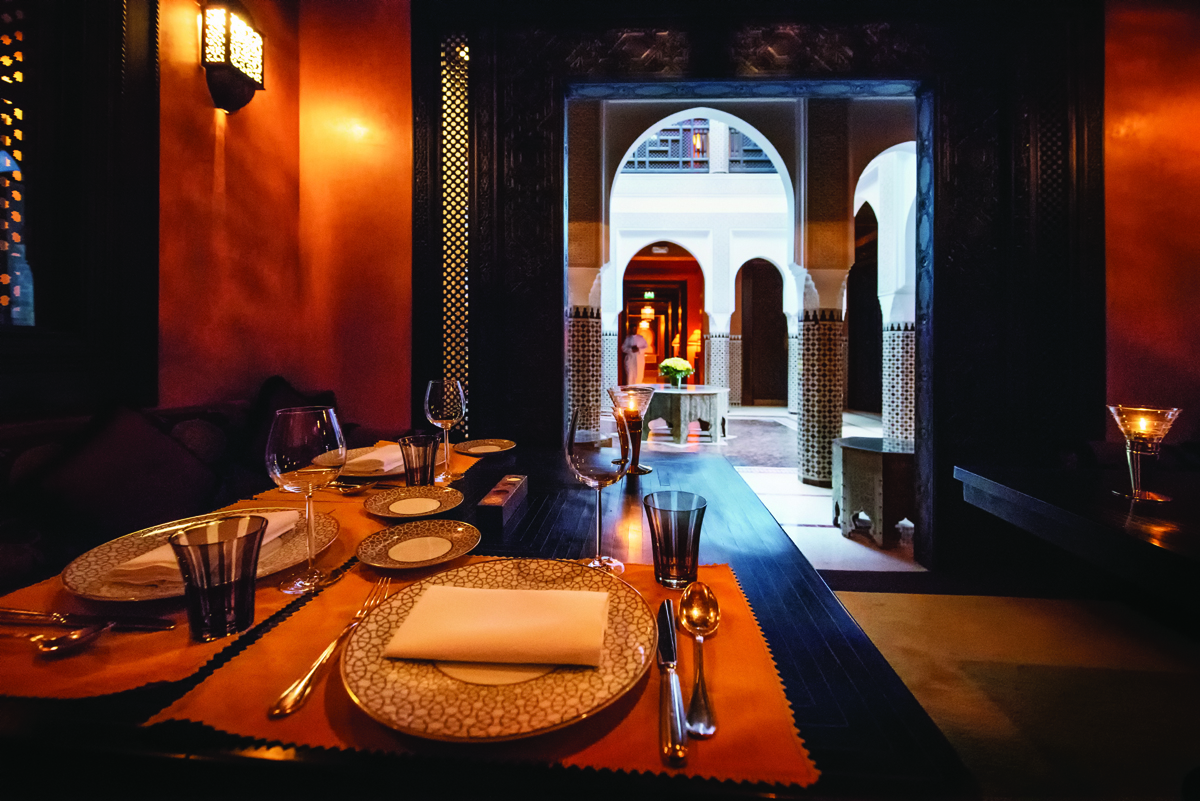 Morocco’s grand La Mamounia resort is an oasis whose opulence does not detract from the exotic destination of Marrakesh. Among the property’s impressive collection of restaurants is Le Marocain, which showcases elegant interpretations of the local cuisine. Traditional dishes like pastilla, a meat pie typically stuffed with pigeon, is elevated with lobster, while multiple tagines (classic Moroccan stews) include a version sweetened with strawberries for dessert.