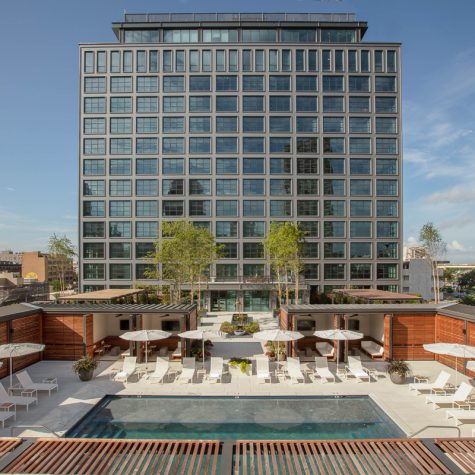 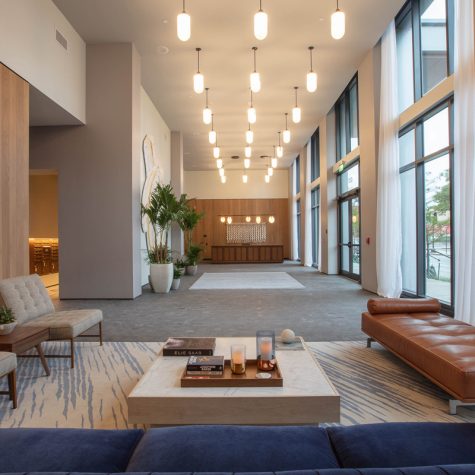 When you imagine the grand old houses of New Orleans, you immediately envision ornately decorated rooms stuffed with antiques and Victorian chandeliers. The 300-year-old city has a fervent devotion to history, expressed in not just heirloom-laden local décor, but in spirited cultural traditions like Mardi Gras, Jazz funerals and king cakes.

However, things are changing in The Big Easy. New Orleans is in the midst of a renaissance, with a new spirit of optimism giving rise to contemporary expressions of living. The Standard, a modern vision of 89 luxury condominiums now open in the bustling new South Market District and currently welcoming its very first residents for move-ins, is part of that evolution. 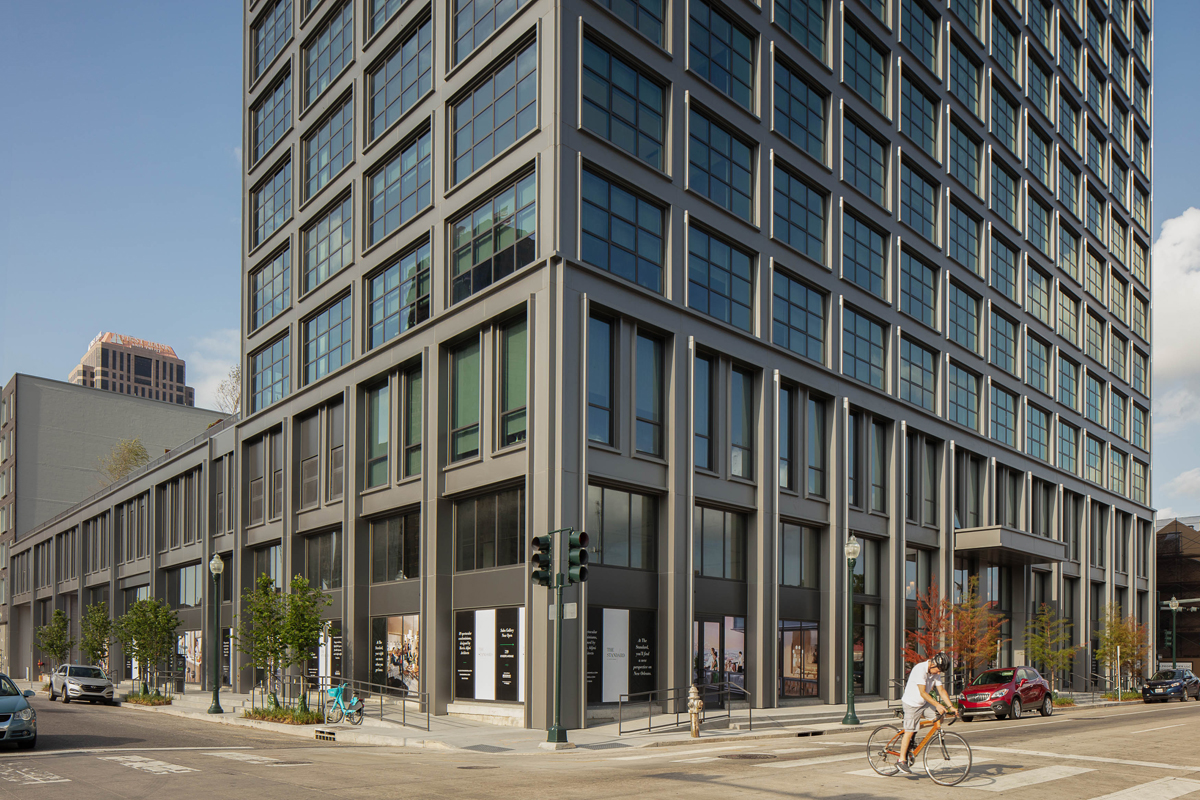 Co-marketed by ON Collaborative by Coldwell Banker Real Estate Services  and Latter & Blum and built by The Domain Companies with architecture by New Orleans native Morris Adjmi, The Standard manages to “stay close to New Orleans’ architectural roots, and maintain a close connection to the existing fabric of the Warehouse District,” while looking towards the future for design and function, says David Wolf, president of ON Collaborative by Coldwell Banker Real Estate Services. That sense of historical reverence, combined with the 15-story building’s ambitious modernity has been met with marked enthusiasm by New Orleanians and repeat visitors alike. Among those repeat visitors: Stan and Laurie Miller are preparing to move into their two-bedroom view residence on the 13th floor next month.

The Millers — who live full-time in Baltimore, where Stan’s dermatologic surgery practice is based, and own another residence in Florida — have been coming to New Orleans for over 20 years.

Indeed, the Millers have cast their net far and wide in New Orleans, despite not being full-time citizens. Both of their adult daughters have lived in the city; their daughter Parker attended Tulane University and their other daughter Hollis did an internship with Penguin Publishing. Laurie rode the Zulu float in 2006 during the first Mardi Gras parade after Katrina. The Millers were in the Superdome when the Ravens won Superbowl XLVII in 2013. They have seen Trombone Shorty playing in a private courtyard on Royal Street countless times. From Jazz Fest to French Quarter Fest, they have truly let the good times roll, or as New Orleanians would say, “Laissez les bons temps rouler!”

New Orleans has that effect on people. It is a city of possibility — wild and intoxicating, rebellious and free, inspiring people to do things they wouldn’t normally do. Like, say purchase a third vacation residence. 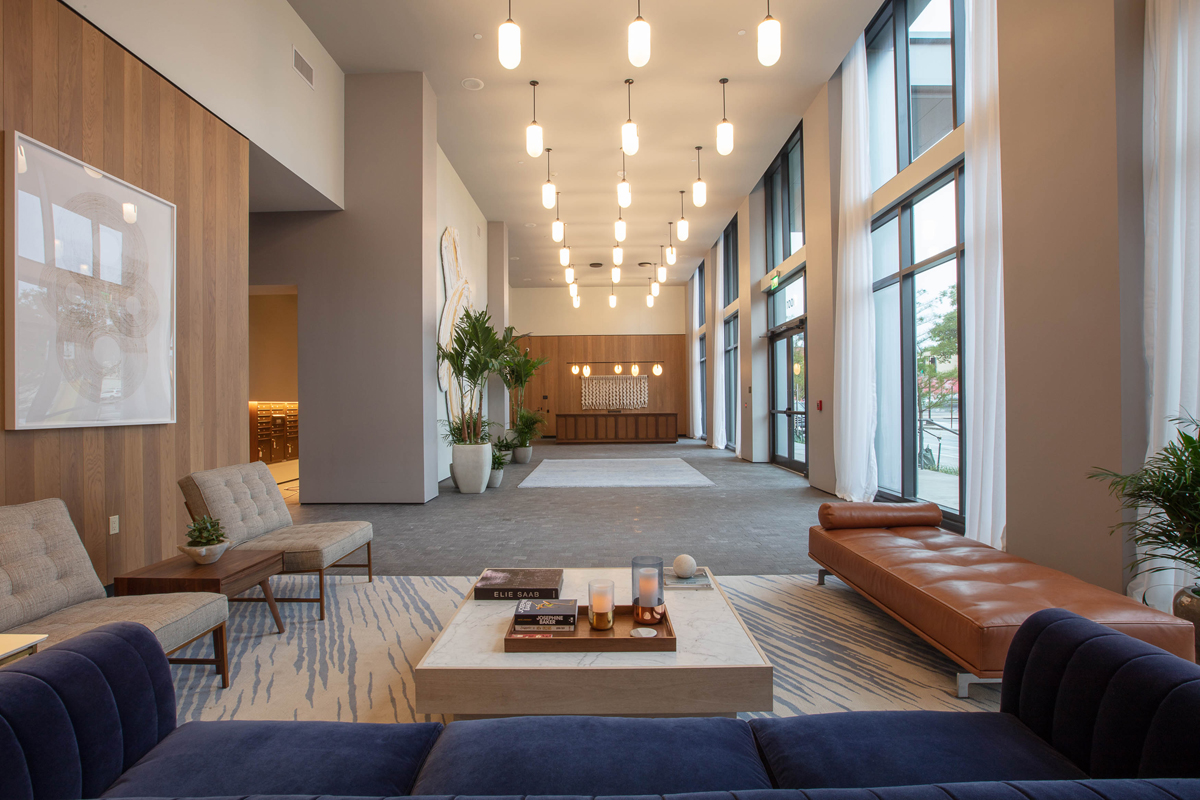 “It all started last fall when a friend from Baltimore began house hunting in New Orleans,” recalls Laurie. “My husband remarked that the only way he’d ever buy a house in New Orleans was if it was a condo in the Warehouse District and within walking distance to Peche, his favorite restaurant. I thought, there’s no way he’s serious!”

He was. Stan, who had recently turned 60, wasn’t a natural risk taker — but was ready to take the leap. Says Laurie: “He just felt like, why not do it now? This is the time to do it.”

She began researching properties on the Internet, and eventually came across The Standard. It checked all of Stan’s boxes: move-in ready and centrally located. At the sales gallery on O’Keefe, the couple was greeted by Caitlin Brewster, who took them on a hard hat tour of a model and the under-construction building.

“The model was really beautiful,” says Laurie. “It was clean and modern. And the best part was, we didn’t have to do any renovations. We could walk to the Superdome and the French Quarter.”

The Millers selected a Southeast-facing unit, with views overlooking the Mississippi River and the Crescent City Bridge.  Inside, a modernist-inspired space provides a rich palette for enjoying their beloved second city. A kitchen touched with walnut cabinetry, honed marble countertops, oil-rubbed bronze fixtures, Sub-Zero refrigerator, Wolf ovens and cooktop and under-counter wine cooler offers them a desirable place to entertain when they are in town. Their bathrooms are the epitome of luxury too, with washed grey oak vanities, brushed marble countertops and Watermark fixtures. 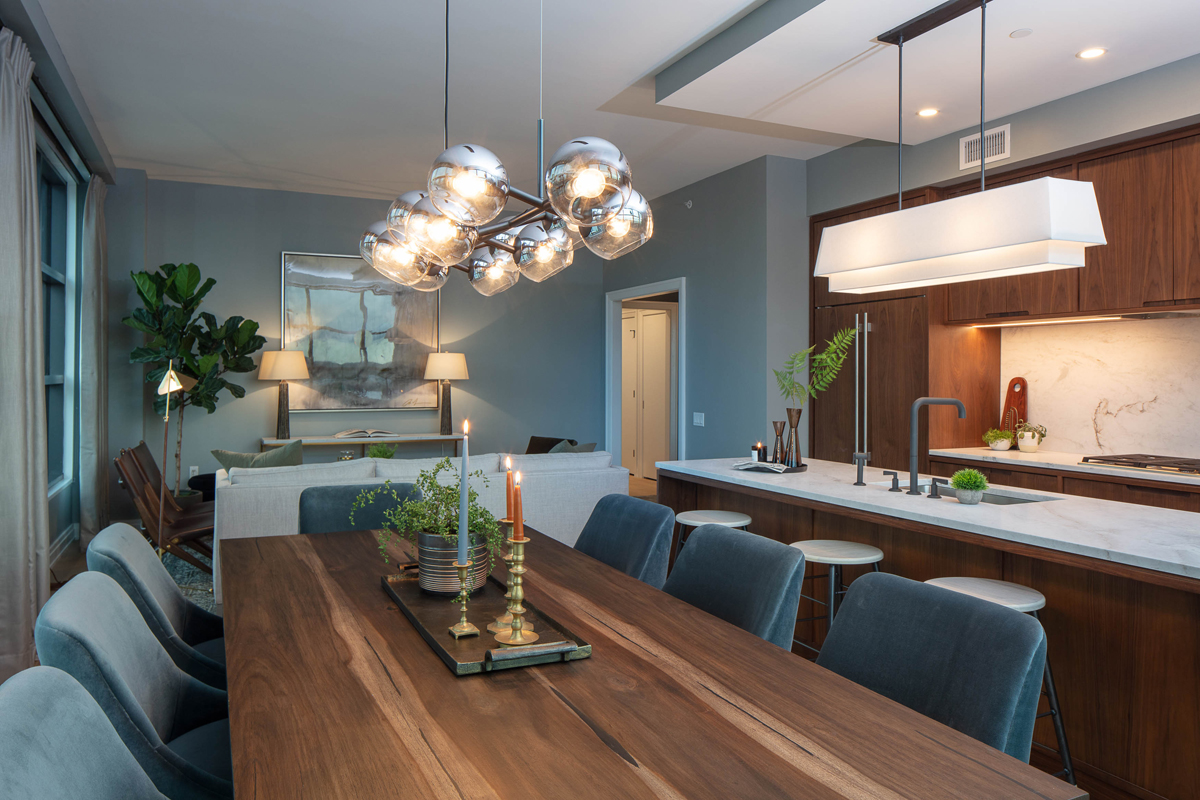 To furnish their new home, Laurie commissioned Caroline Farouki, part of the New Orleans-based husband-and-wife team who was responsible for designing the model at The Standard. Farouki, who is known for decorating some of the chicest restaurants and hotels around the city, has been busy filling the 2-bedroom corner residence with modern furnishings and art from local artists. Maintaining a local connection to the community was important to Laurie. 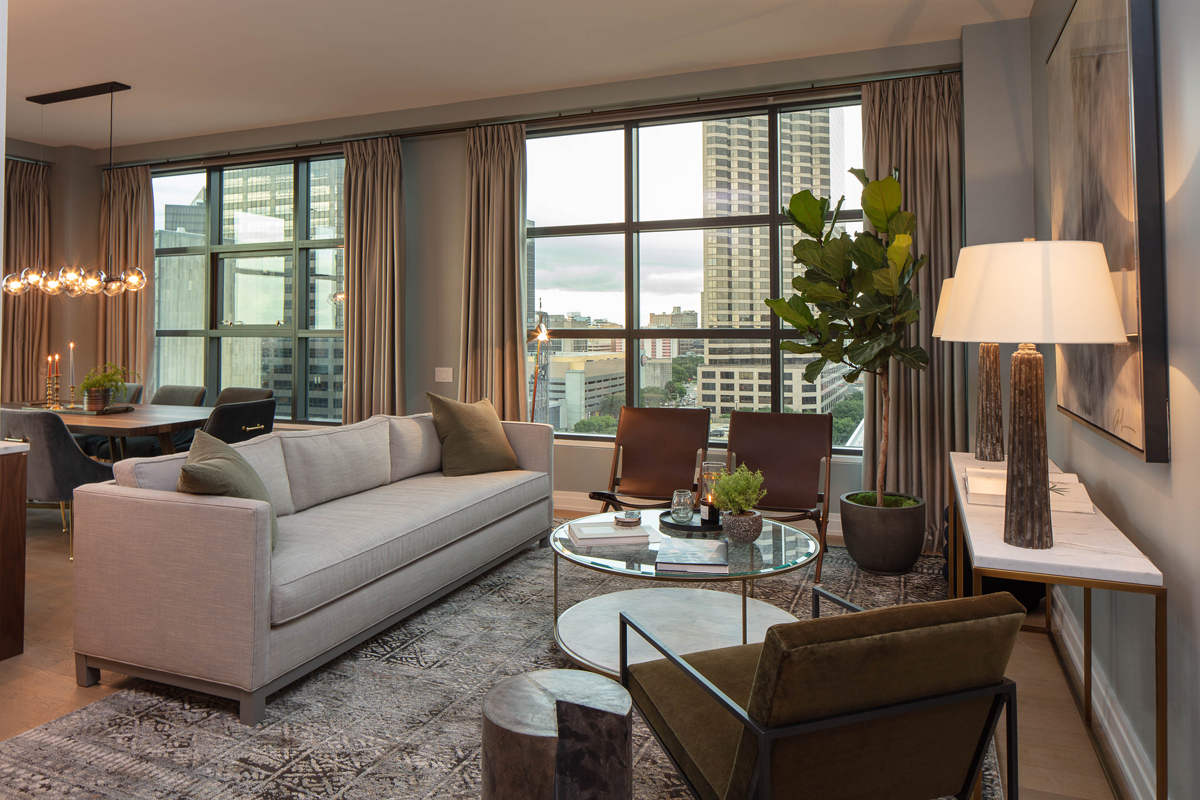 “Our house in Baltimore is traditional, so the modern style is new for us,” she says. “We’re excited to see the end result.”

Besides the interiors of their new home, the Millers were particularly enamored with the amenities and services at The Standard. There is a 24-hour door concierge, a state-of-the-art fitness center and nearly an acre of private outdoor deck space, including a saltwater pool, private cabanas, pool house, club room and outdoor kitchen and dining space. 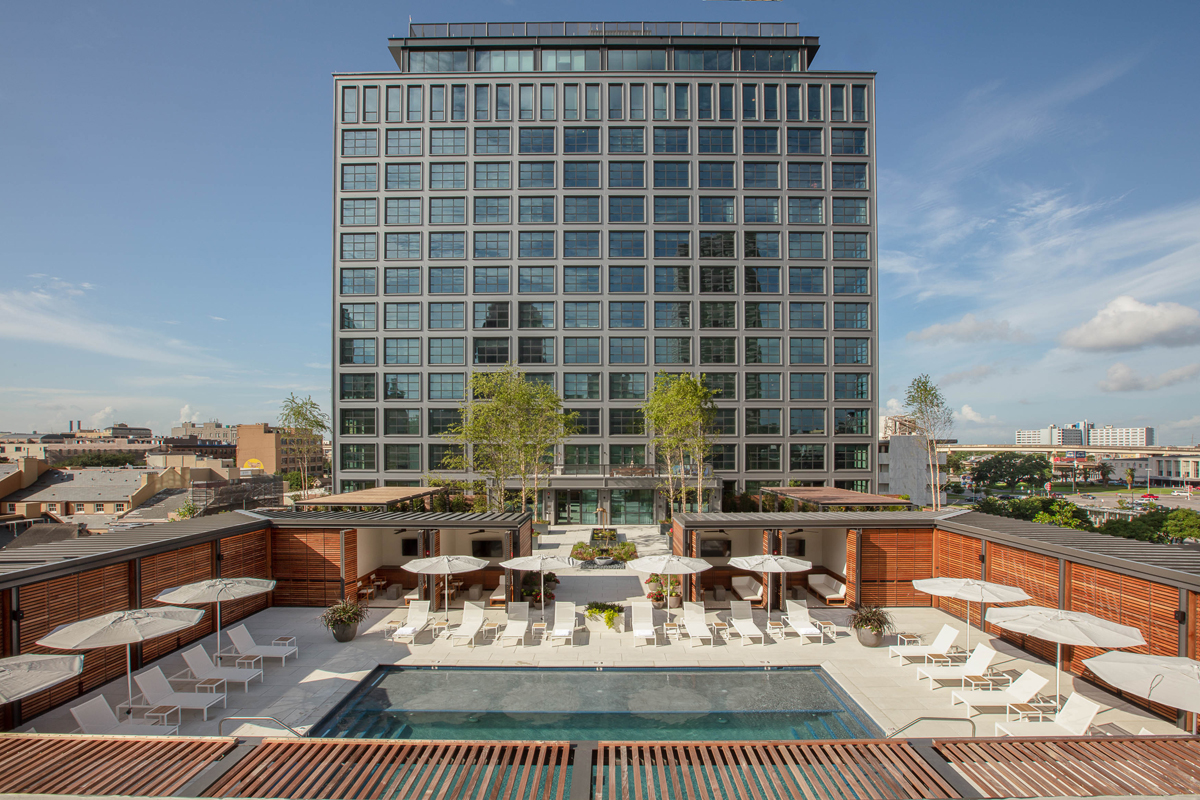 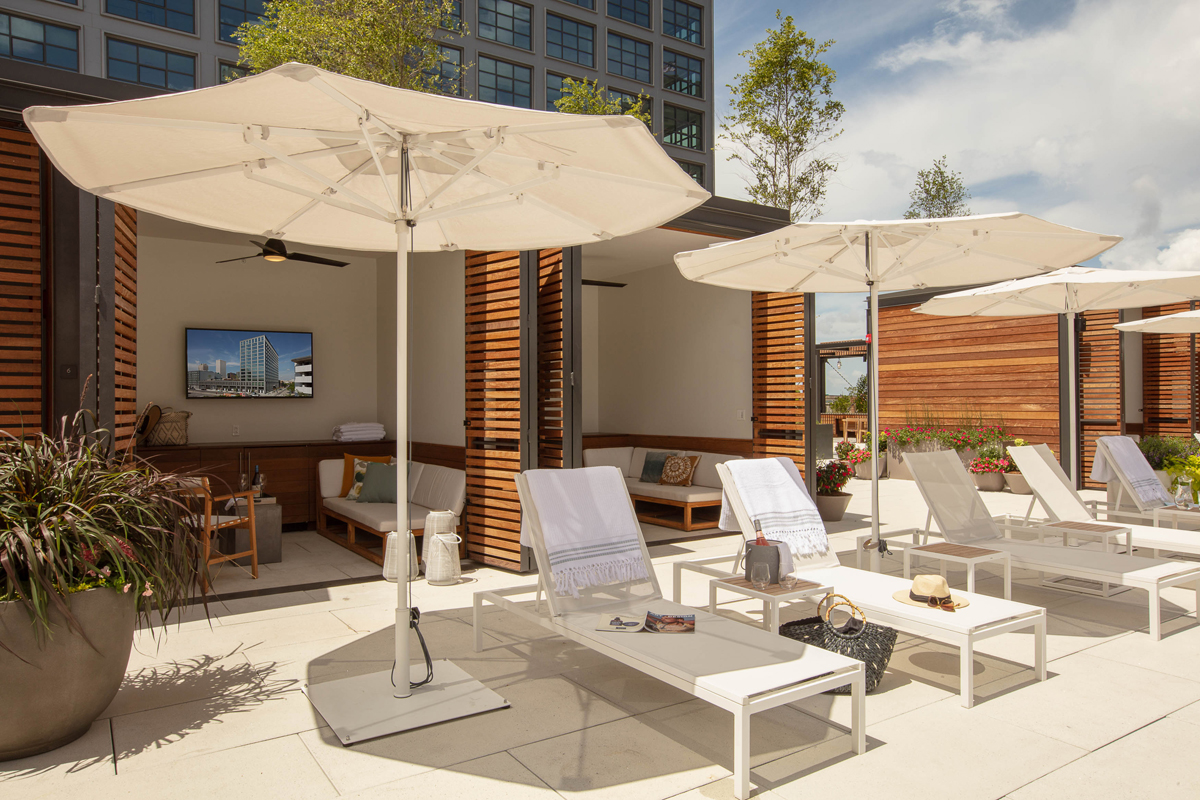 “The 24-hour concierge is a big plus for us, since we’re buying from another state and can’t be here all of the time,” says Laurie. “I can call or email them if I know someone is going to drop something off for me, and they can leave the item at the front desk for me. I can order groceries online, and have them delivered so the refrigerator is fully stocked when we get into town. They make it easy for someone who is using The Standard as a second home.” 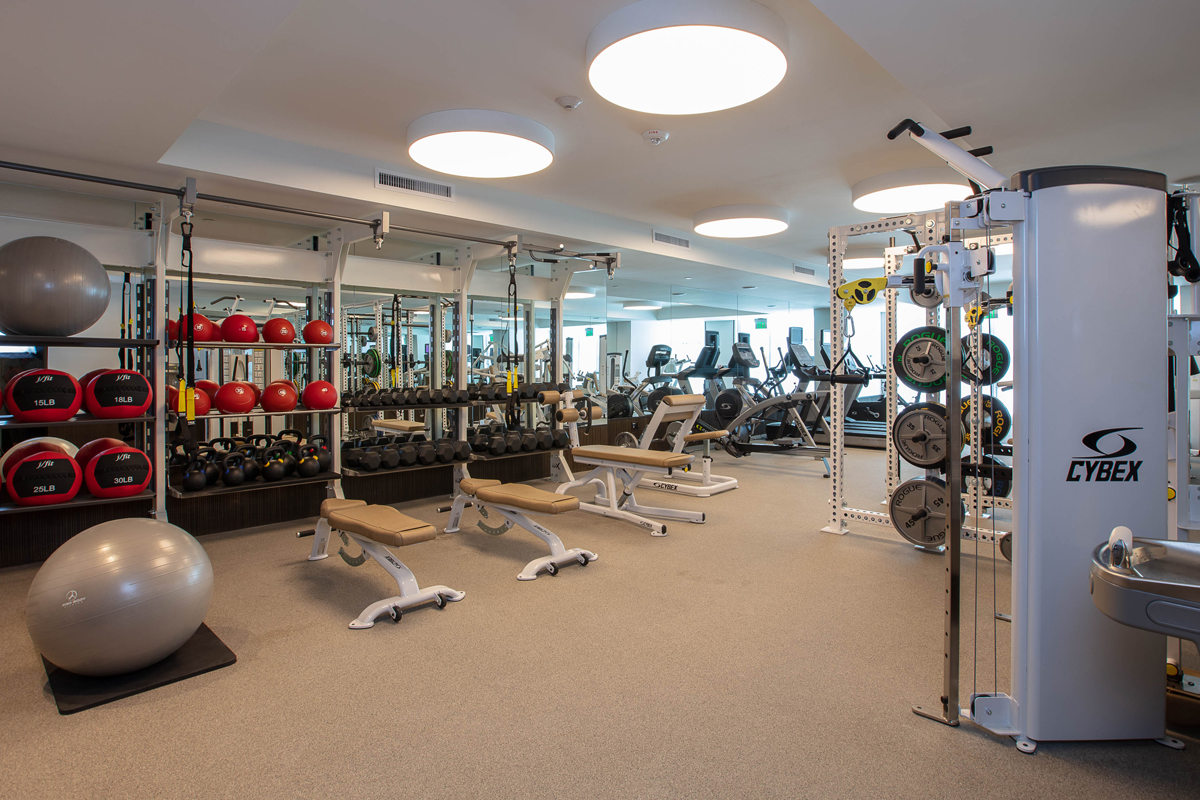 Both Stan and Laurie are excited to try out the fitness center, and because they love to entertain, they believe that they will find great use for the club room. Adds Laurie: “If you want to entertain 15 people in your place, you have all of the facilities right there, and a third level at the pool can hold a lot more people.”

As their move-in date rapidly approaches, the Millers are filled with a festive sense of expectancy that could only precede a trip to their favorite city, where they are finally setting down roots. What will they do the first night in their new home? They’ll pop a bottle of Clicquot. Perhaps Stan will mix a Sazerac to go. Dinner will be at Peche, of course — the perfect endnote to mark the beginning of a whole new chapter.