The crowd was easily a dozen deep, with many more hustling up to the balcony of the Quail Lodge & Golf Club to get an unencumbered look at the car sheathed in aqua and the man on the mic, president of Bugatti Automobiles S.A.S., Stephan Winkelmann. If ever there were an appropriate venue in which to introduce the world to the new $5.8 million Divo, Bugatti’s newest supercar, The Quail, A Motorsports Gathering on the Monterey Peninsula — part of the exclusive Pebble Beach Concours d’Elegance during Monterey Car Week — is it. 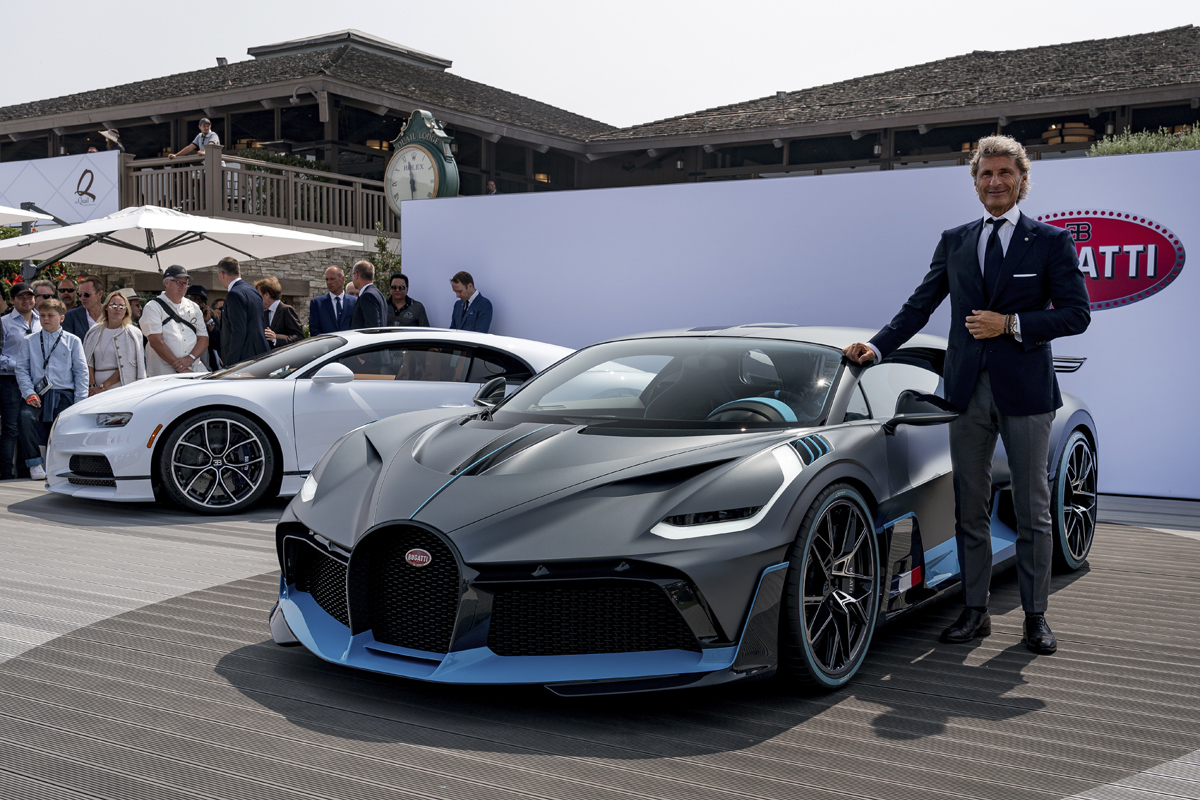 The response to the first sight of the Divo as it emerged from its veil was equally fitting, eliciting an audible blend of exclamations, applause and camera clicks. Of course, to admire an automotive wonder is one thing — to own one, another. Had anyone opted to wave their checkbook, or perhaps, more appropriately, their American Express Black Card in an effort to claim one of the three-dozen-plus vehicles, they would have been met with disappointment. 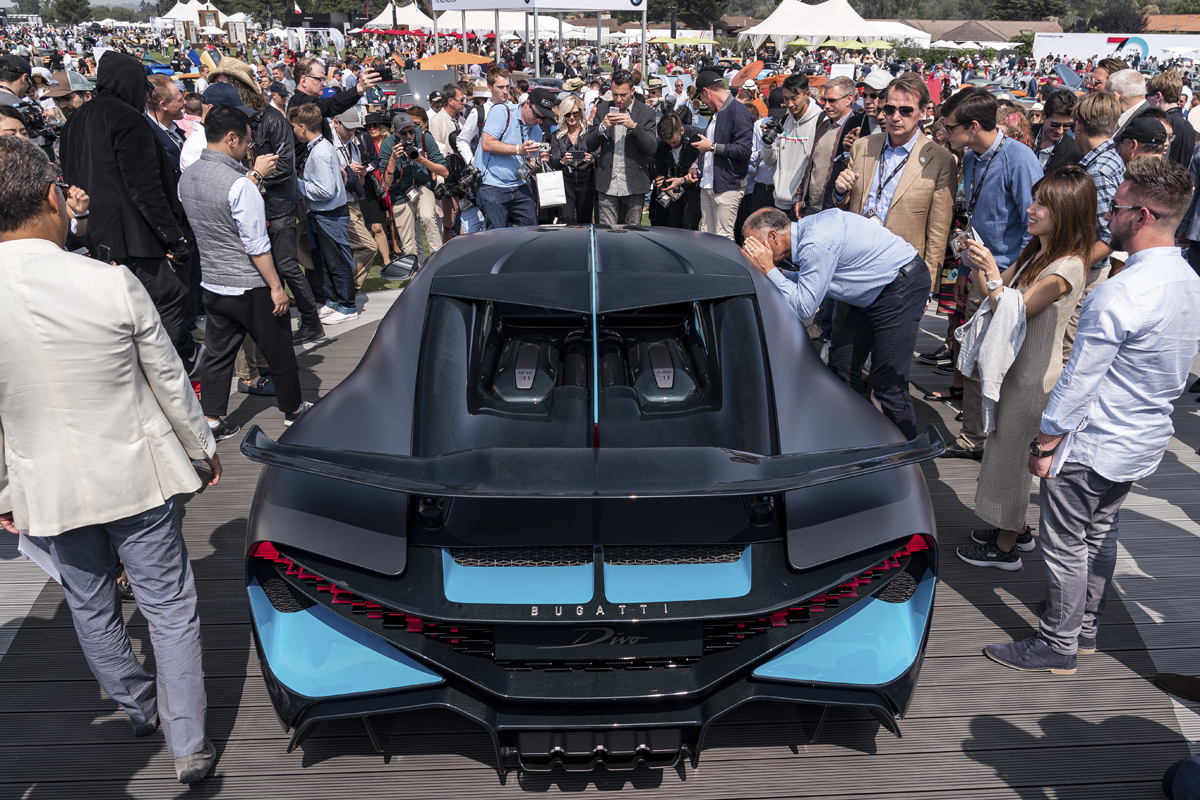 All 40 Divo cars were pre-sold to a select group of Bugatti Chiron owners, who had received a purchase invitation prior to the official premiere — a testament to the tremendous draw of Bugatti, and an official shoulder-shrugging of the posh price tag. After all, the Divo is the most expensive production car ever made (the one-off Mercedes-Benz Maybach Exelero commissioned by Goodyear’s German subsidiary, Fulda, was priced at $8 million, and the bespoke Rolls-Royce Sweptail can be yours for $13 million).

For their sub-six-million-dollar investment, Divo buyers received a sculpted supercar that manifests the artistic background of its founder, Ettore Bugatti, the stop-and-stare likelihood that puts Divo in a rarified class (even in sports car-loving cities like L.A.), and the type of performance other Bugattis can only dream of. Namely, it corners on rails. 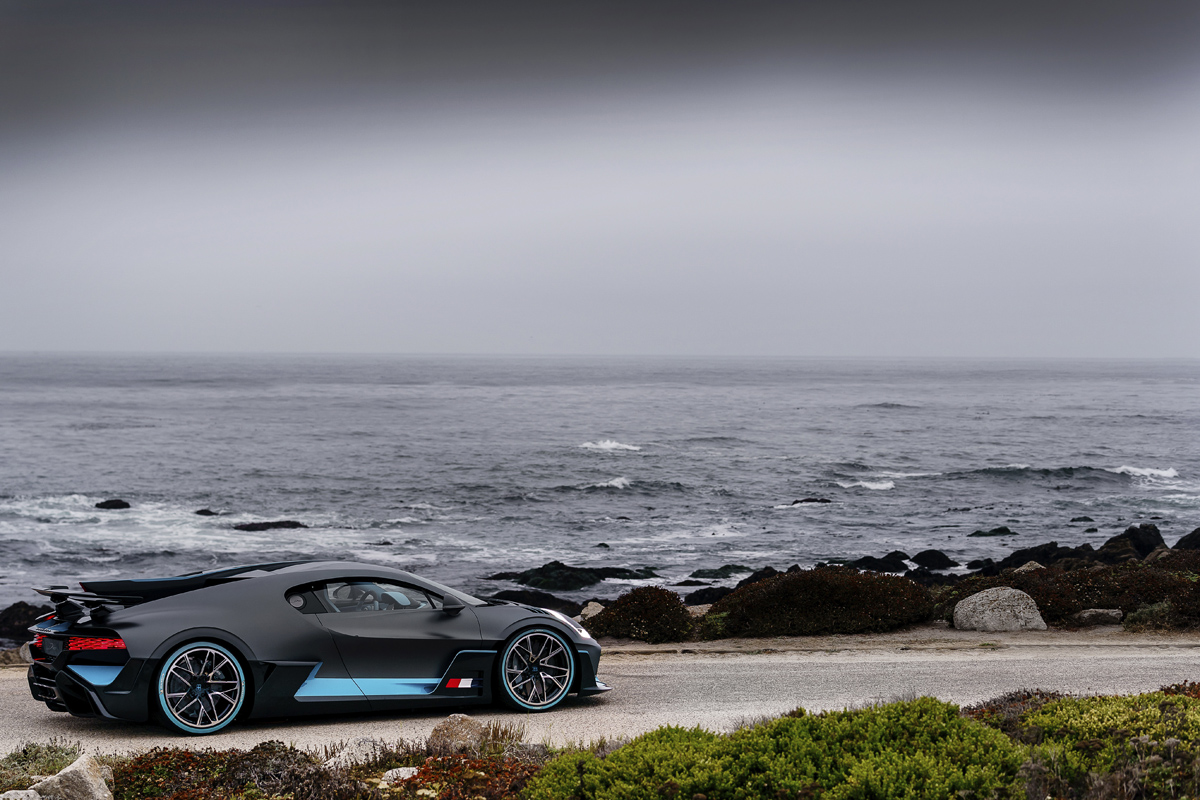 “Happiness is not around the corner. It is the corner,” Winkelmann said, in a release announcing the car. “The Divo is made for corners.”

Using the much-revered Chiron as its base (identical platform, identical powertrain with a quad-turbocharged 8.0-liter, 16-cylinder engine producing 1,500 horsepower), Bugatti rolled out the Divo at 77 pounds lighter than the Chiron, a feat accomplished through a number of chassis-, suspension-, and aerodynamics-related changes that included upping the amount of carbon fiber, using lighter wheels and tinkering with the air intakes. (The Divo can also generate approximately 1,000 pounds of downforce, an increase of 200 pounds over the Chiron.) The result: It bests the Chiron around the Nardo circuit by a full eight seconds. 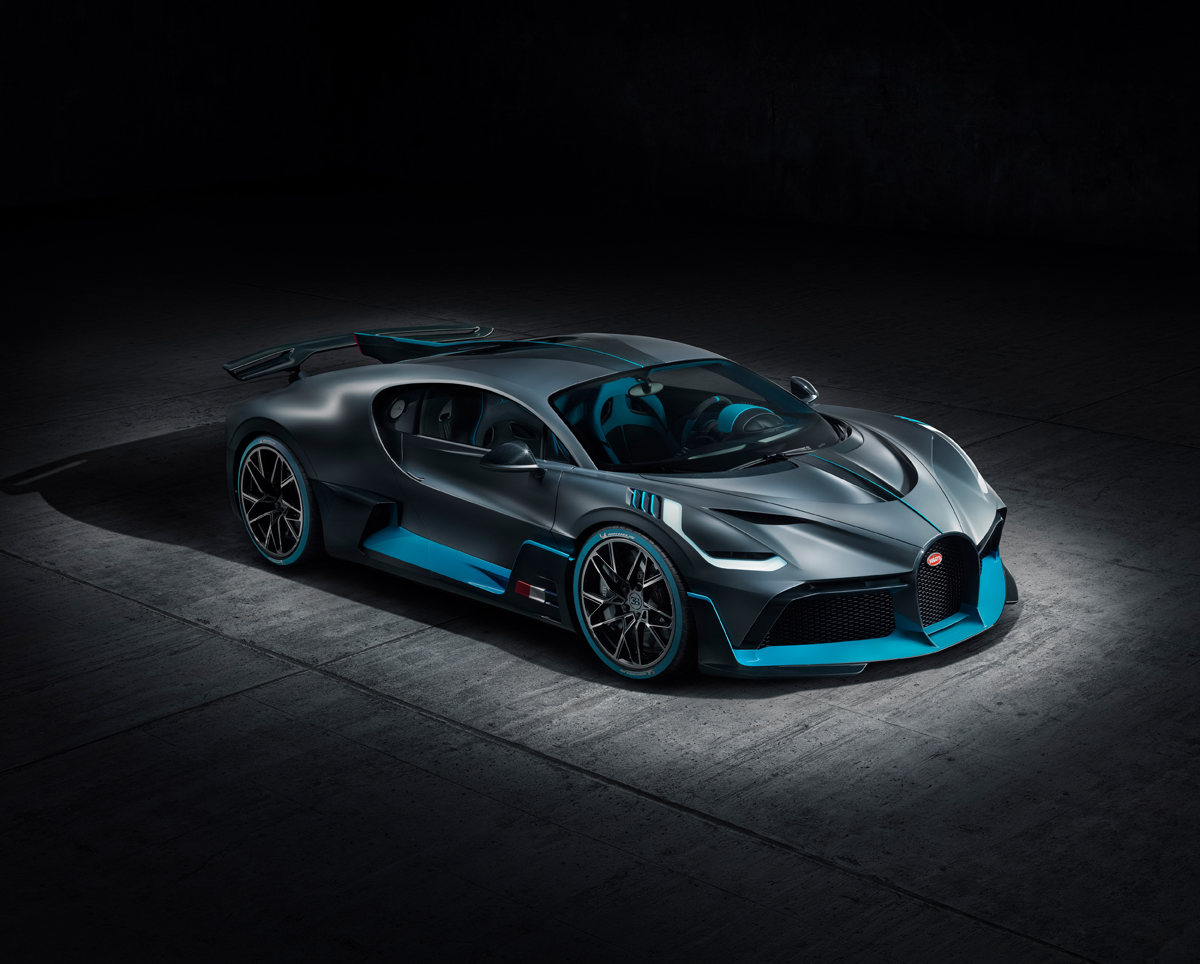 We spoke to Winkelmann, who gave us a peek behind the curtain of the Divo’s production and performance, and told us what lies ahead for the brand.

Coldwell Banker Global Luxury Were you anticipating all 40 of the Divo cars to sell out, or to sell out immediately?

Stephan Winkelmann It was our idea to create a one-off super sports car, but also a one-off opportunity for our customers. When you start such a unique project that really offers a true value to the customer, it will usually sell out rather quickly. The fact that the Divo was sold out long before the official world premiere in August at the Monterey Car Week is confirmation for the Divo project and for the whole Bugatti team that worked on it.

Coldwell Banker Global Luxury How much impact would you say the exclusivity had on the sales pace?

Stephan Winkelmann Exclusivity always creates a certain purchase desire. However, the Divo customers didn’t buy the Divo because of its limited nature. Innovation and technology are the main drivers for our customers, and especially for those interested in the Divo. In addition, all Divo customers are Chiron customers, or even owners of several Bugatti vehicles. It is proof of our customers’ passion for and belief in our brand that they bought into the Divo project so fast. 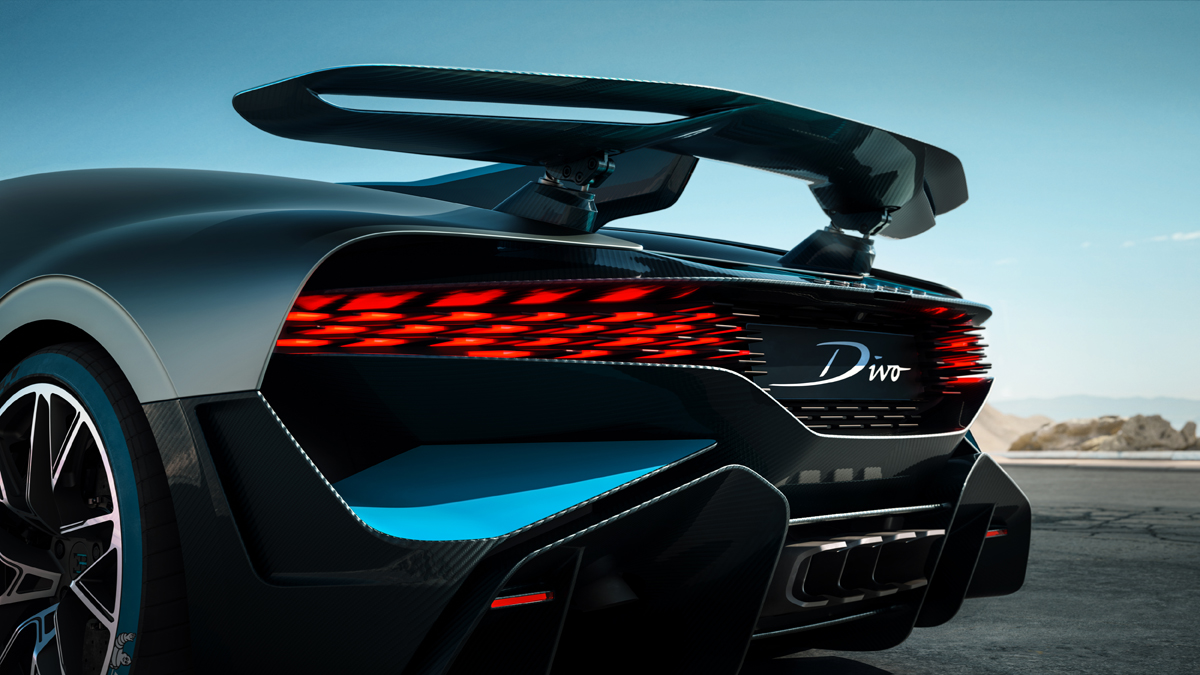 Stephan Winkelmann We don’t build our cars for any specific customer; we build them because we believe in the project outline. We strive for innovation and enjoy continuing to push our boundaries and trying to make the best technology even better. Our customers — the existing ones, as well as the ones embracing the brand for the first time — appreciate exactly this and keep showing us their support and enthusiasm.

Coldwell Banker Global Luxury We read a review that called the Divo a “lighter, wilder, better-handling Chiron.” Is that accurate, and, if so, was that the intent of the car’s design?

Stephan Winkelmann I describe the Divo as a perfectly balanced super sports car with all the unique selling propositions of the Chiron, but focusing even more on enhanced driving dynamics, agility and road handling. It is immediately recognizable as a Bugatti and delivers the most fun on winding roads.

Also, the new distinctive design visually underlines the driving dynamics. It gives the car more stance and a faster and more performance-oriented silhouette, while keeping Bugatti’s core design cues: the horseshoe, the c-shaped Bugatti line on the side, and the center fin.

Coldwell Banker Global Luxury Some question the need for performance beyond what the Chiron had already achieved. How would you respond?

Stephan Winkelmann We have to define “performance” in order to answer this question. There are many different kinds of performance, and I’ve come to see that — especially in the public opinion — Bugatti is seen as the king of the straight line. Reducing our super sports cars to their longitudinal acceleration is, however, not a complete vision of the performance. The modern Bugatti cars — the Veyron, the Chiron and also the Divo — are very exclusive, sophisticated, elegant and, to the surprise of many who haven’t driven them, highly comfortable cars that are also very, very fast.

We currently don’t see the need for an increase of the performance in terms of longitudinal acceleration and top speed beyond those of the Chiron. In fact, the shift of our focus in the development of the Divo in terms of performance is best shown by the top speed limitation of 380 kilometers per hour (236 miles per hour), compared to the 420 kilometers per hour of the Chiron (260 miles per hour) necessary to achieve the new level of driving performance and handling of the Divo. With more lateral acceleration, there is a new driving feel on winding roads.

Coldwell Banker Global Luxury What’s next? Is there a ceiling for Bugatti when it comes to performance?

Stephan Winkelmann As I just tried to explain, the term “performance” covers a wide range of areas. If you want to be the fastest on a straight line, you won’t be the fastest on a race track, and vice versa. It is always a matter of defining the kind of performance you aim for. What I can guarantee is that we will not rest; we will — just as our founder did from the very beginning — keep alive this passion for perfection that characterizes us and converts our cars into such masterpieces of technology and art.