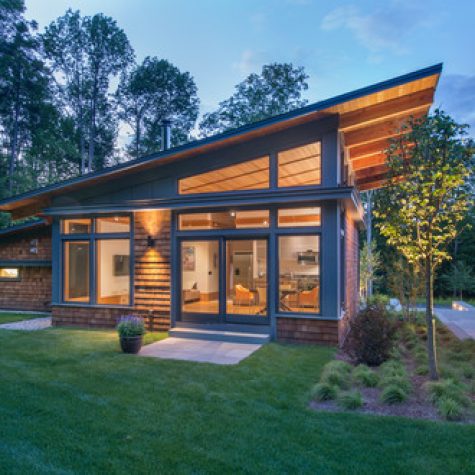 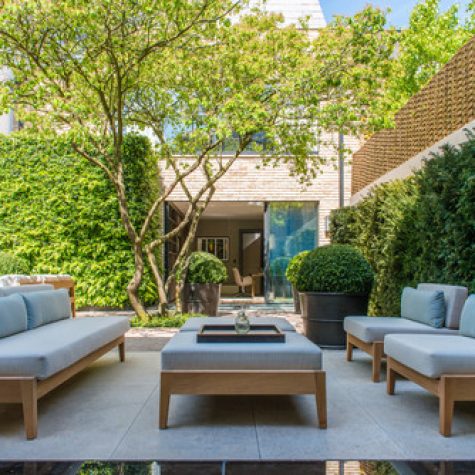 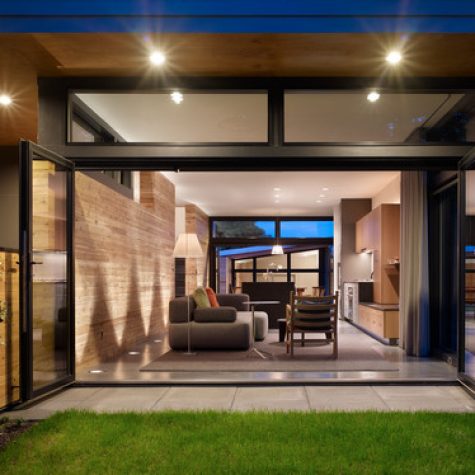 America’s love affair with midcentury modern design continues unabated. Today’s architects have helped foster the love affair by renovating homes from that era to fit today’s lifestyles. Midcentury modern homes feature great design moves that can be applied in other homes today: celebrating the home’s structure, transitioning seamlessly between indoors and outdoors, and embracing an open-plan layout for informal living in a compact space. Midcentury modern homes were designed with a relaxed aesthetic, which was a welcome departure from the stricter styles of earlier modern homes. Here’s how to bring some of that midcentury modern magic into your new-house design.

Soaring Roof Lines
Midcentury modern homes were typically one-story affairs. This offered the freedom to use a sloped roof line to define the interior ceiling, rather than following the flat ceiling of the floor above.

The roof also typically had a simple sloped shed form with a low pitch, as opposed to the steep roof slope of traditional houses. The ceiling then dramatically drew your eye from the low side of the room to the highest point. The dynamically sloped ceiling became a defining feature of the interior space of midcentury homes.

This home near Carmel, California, is a modern interpretation of this idea. Clerestory windows beneath a sloping roof are similarly added above sliding doors.

In this new Burlington, Vermont, guesthouse, rafters are left exposed on the exterior but are enclosed on the interior for insulation.

This approach brings in beautiful natural light and also serves to highlight the structure of the roof, making it visually separated from the supporting walls.

In this river house in Washington, the rafters are left exposed inside and out, and the structural wood planks above are visible, giving a clear idea of how the building is assembled.

Midcentury modern homes are well known for their soaring walls of glass. That’s an obvious design move if you have the benefit of a large lot and distant views. Midcentury modern houses were built as part of the postwar housing boom and were often located on postage stamp-sized lots in vast subdivisions. Creativity was needed to create privacy with the walls of adjacent homes located only a few feet away.

Tall garden walls often created privacy, turning a small lot into an advantage. The close view to the wall can be managed, because, after all, you own it. In contrast, houses with faraway views may be subject to the whims of distant property owners.

In an Eichler home in Palo Alto, California, seen in the photos above, a high wooden garden wall provides privacy for the exterior garden and the adjoining glass-walled living room. This “exterior room” is intimate in size, making an easier task of furnishing the space with furniture, a fire pit and a waterfall.

Small but Flowing Spaces
My, how they’ve grown. Homes in the 1950s were dramatically smaller than they are now. In the postwar era, to meet the booming demand for housing while personal budgets remained tight, modest house sizes were the norm. The average size of a new single-family home in the U.S. was less than 1,000 square feet in 1950, according to the National Association of Home Builders. In 2015, the average square footage of a new single-family home had grown to over 2,600 square feet, according to the U.S. Census Bureau.

With the cost of construction rising in recent years, it is more relevant than ever to get inspiration from the lesson of the smaller original midcentury modern homes. As shown here, the open and flowing spaces popularized in midcentury modern design combined living, dining and kitchen spaces to make a smaller home seem larger.

Much has been said about homes having grown too large, and sometimes an open plan in a large home can seem cavernous. Take a cue from midcentury modern homes by building a smaller home that still feels spacious. This contemporary home in Seattle combines kitchen, living and dining into one relatively small space that is intimate and flowing.

The adjacent walled garden is a great move in this photo of the same home. It’s easy to imagine guests flowing outside during parties — when it’s not raining in Seattle, that is.

Bringing Midcentury Modern Design to Life in a New Home

Bringing Midcentury Modern Design to Life in a New Home