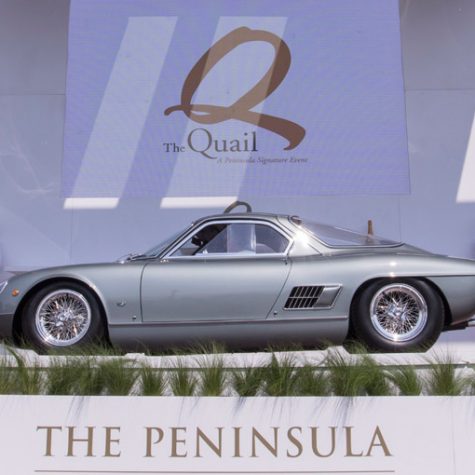 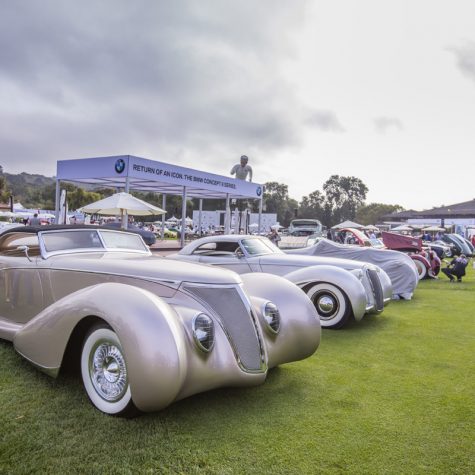 If you have ever had the chance to drive California’s scenic Highway 1 on the Monterey Peninsula during Monterey Car Week, you are bound to come down with a serious case of auto envy. It often comes on furious and fast — like the onset of fever — as a pack of pristine vintage cars  whip around the Santa Lucia mountains and buzz up California’s famous Highway 1. You may or may not know it, but this is The Quail Rally — a two‐day drive comprised of vintage automobiles preceding The Quail, A Motorsports Gathering. As a Peninsula Hotels Signature Event, The Quail has long been considered “the crown jewel in a whirlwind of historic Monterey Car Week events,” says Craig Barkdull, director of sales and marketing for Quail Lodge & Golf Club, The Peninsula Signature Events.

“From its inception in 2003, The Quail has combined elegance, exceptional automobiles and an unsurpassed selection of the finest wine and culinary creations, bringing forth an extraordinarily unique experience for classic car aficionados and gourmets alike,” explains the hospitality veteran, fresh off the 2017 events of this past weekend (August 18-20, 2017). “However, unlike many other motorsports events, it is not only known for its vehicles, but also for the luxury lifestyle and fine culinary components.”

The heart and soul of The Quail is, of course, inspired by the amazing display of the world’s finest and rarest automobiles and motorcycles; however, “it is really a lifestyle event,” he emphasizes. “We want those individuals to say, ‘I don’t care what other motoring events you attend throughout the year, but we must attend The Quail in August.'”

We asked Barkdull to give us an insider’s view of this rare and exclusive event.

What distinguishes The Quail from other events happening during Monterey Car Week?

Regarded for its intimate, garden-party setting and relaxed, easily manueverable display areas set at Carmel Valley’s historic Quail Lodge & Golf Club, The Quail is sponsored by the world’s top luxury automobile companies, fashion and lifestyle brands and beverage companies. The $650 admission fee gives 5,000 auto afficionados and admirers exclusive access to six gourmet culinary pavilions, as well as caviar, oysters, fine wines, specialty cocktails and champagne. There are very few events throughout the world that bring together the demographic of The Quail – which includes some of the world’s wealthiest and powerful men and women, celebrities, Lords and Ladies, and even members of royal families.

How many people attended this year…anyone famous that you can share with us? 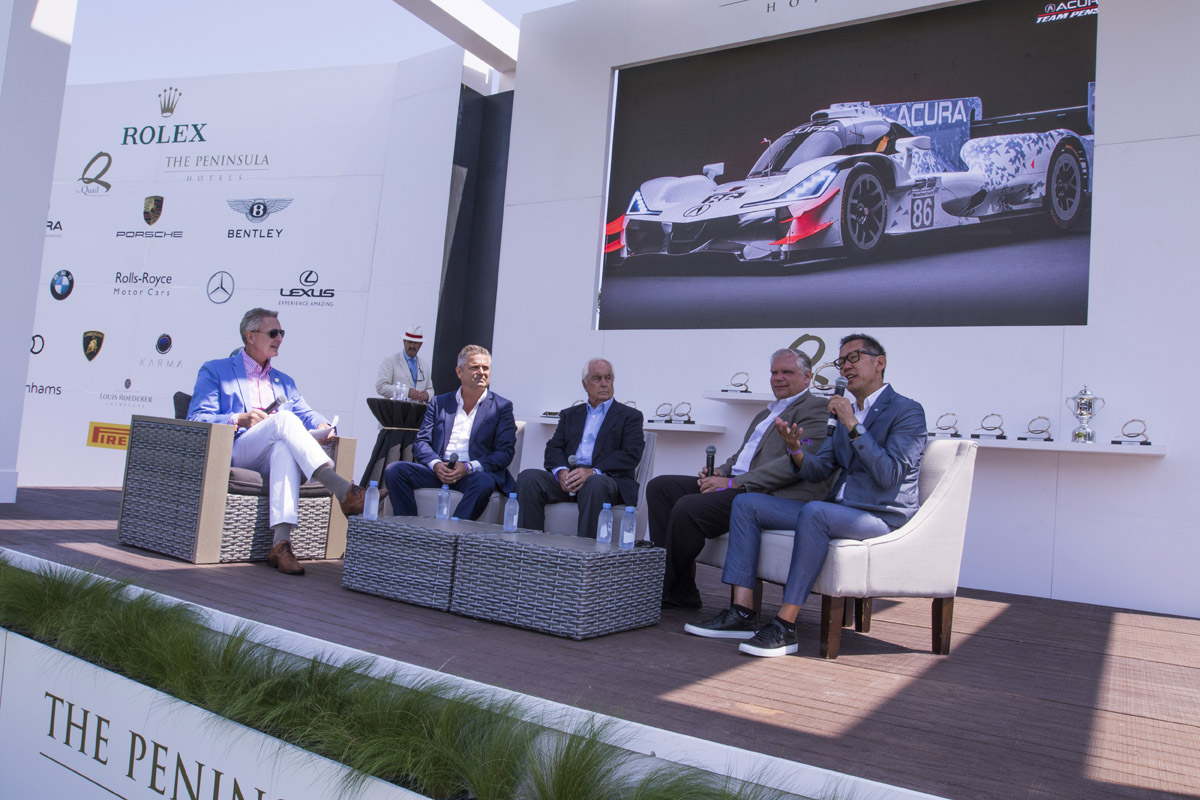 Tell us a little bit more about The Quail Rally.

The Quail Rally is a by-invitation-only, two-day cruising event that consists of approximately 40 cars and 80 participating guests. The routes and experiential stop locations change each year, but they generally focus on the scenic roads and memorable destinations along the central California coast.

Is the rally route always the same, or do you change it up each year?

Yes, it changes each year. The routes and experiential stop locations change each year, but they generally focus on the scenic roads and memorable destinations along the central California coast, including the Mazda Raceway Laguna Seca, Big Sur River Inn and New Almaden Quicksilver Museum.

Coldwell Banker Global Luxury And what about the

Coldwell Banker Global Luxury Now for the fun stuff. Can you tell us more about the automobiles and motorcycles that were featured

Gordon McCall, Director of Motorsports for The Peninsula Signature Events  selected one exemplary vehicle from each of the classes featured at this year’s event. These vehicles represent the excellence in driving machines that The Quail attracts. This year, the 1964 ATS 2500 GTS, owned by Bruce Milner, won the Rolex Circle of Champions Best of Show Award. It is believed that this vehicle is one of perhaps only eight ATS cars ever built. ATS vehicles were founded by Count Volpi, an Italian aristocrat and car enthusiast, together with famed Ferrari engineers Carlo Chiti and Giotto Bizzarrini. Their dream was to build a Formula One car to directly compete with Ferrari. This winning vehicle, chassis No. 2006, is one of two lightweight combination street/track cars with an aluminum body, larger 2.5-liter engine, sliding windows, racing seats and minimalist interior. 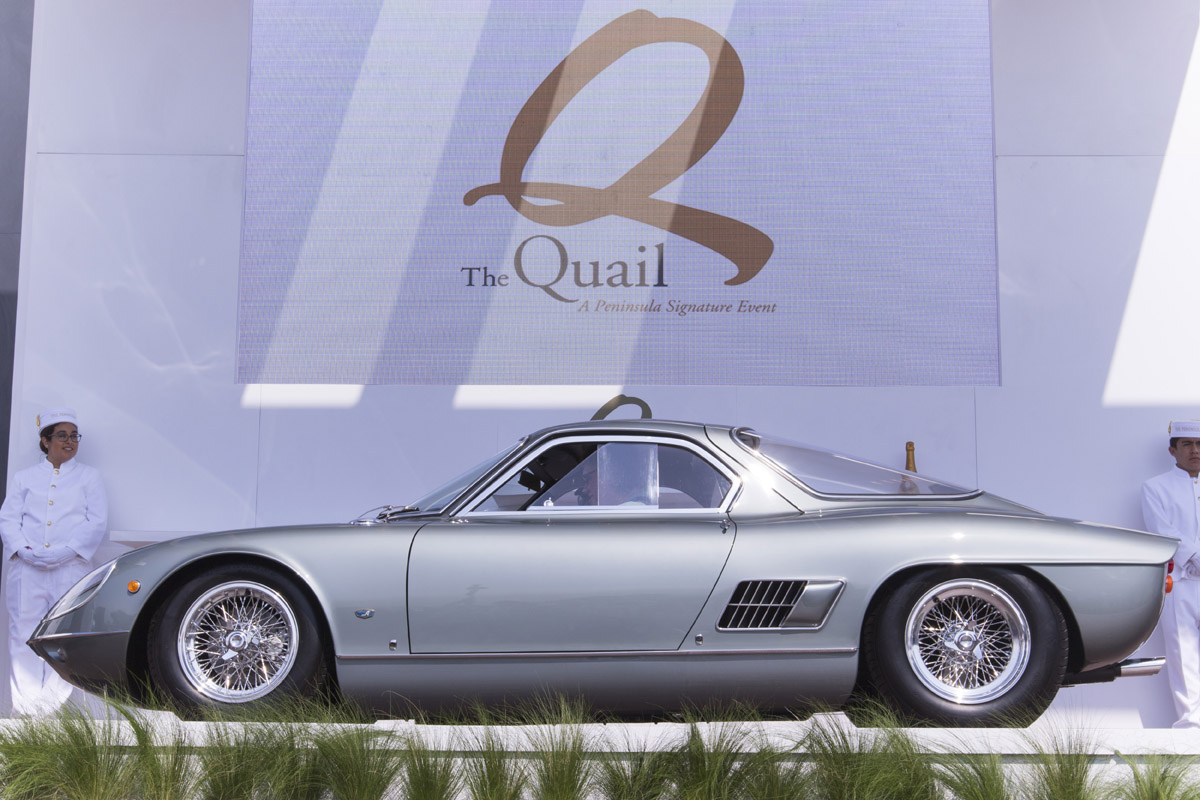 Other feature vehicles representing their respective classes include:

• Pre-War Sports and Racing: 1931 Bugatti Type 51, Peter & Merle Mullin: Chassis #51132 enjoyed an impressive racing career: first racing at the 10-hour Belgian Grand Prix, the car continued on to the Winner’s Circle at the Algerian Grand Prix, next to the Casablanca and Dieppe Grand Prix, and in 1934 alone competed in eight Grand Prix. After the third-place finish at Picardy Grand Prix, Charles Brunet sold #51132 for only $500.

• Post-War Racing: 1978 BMW 3.0 CSL Group 2, William Kincaid: This BMW 3.0 CSL, fielded by Willi Martini’s Renngemeinschaft Martini am Ring, has a special place in Nurburgring and BMW racing history. The team raced BMWs long before Alpina, Schnitzer, or the factory, and their CSL was a familiar and well-loved sight at the Ring with its distinctive “Grüne Hölle” graphics.

• Post-War Sports 1945-1960: 1949 Cisitalia 202 GT Gransport Berlinetta, Don & Carol Murray: One of only 170 Cisitalia 202s built, this car’s coachwork is by Vignale and is very similar in appearance to those designed by Pininfarina. This 202 was fully restored in Italy and has been shown by its previous owner at Bagatelle where it won its class and then shown at Villa d’Este in 2006. 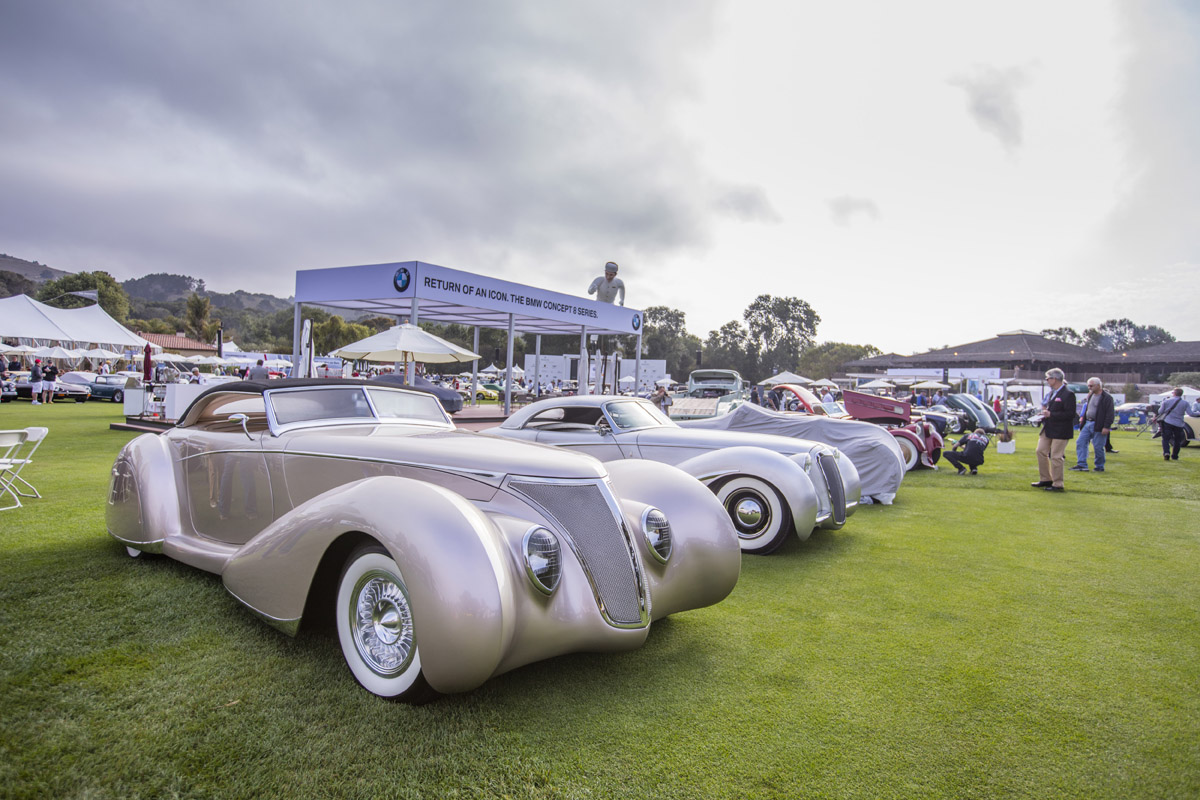 • Post-War Sports 1961-1975: 1967 Porsche 911 S, McKeel Hagerty – Michigan: In 1980, 13-year-old McKeel Hagerty purchased this classic Porsche for $500. The previous owner had converted it into an ice racer, which left behind significant rust damage. From his family’s garage and a $2,500 budget, McKeel and his father restored the car in time to drive it throughout high school. In the mid-2000s, the special 911 was again restored to its current condition. Still driven regularly, this family-owned and well-kept Porsche has continued to provide driving enjoyment for 50 years.

• Sports and Racing Motorcycles: 1965 BMW R60/2, William Weiner: Purchased by Mr. Weiner from a collection in Dublin, Ireland in late 2016, this one-owner, totally original BMW was sent to Mr. Michael Korn in Germany in 1982, where a concours restoration was completed in 1984. This bike is fully photo documented and has all receipts and title history, along with BMW factory authenticity certificate. It is perhaps the finest example in existence.

• The Great Ferraris: 1959 Ferrari 250 LWB California Spyder, Charles Wegner: This is the 17th Ferrari LWB California Spyder built and is a completely restored vehicle. The car was built and delivered with a factory competition engine and has a certified Ferrari Classiche. It won Best in Class at the 2014 Villa D’Este. The car has been in the United Kingdom for quite some time and has just arrived in the United States in June of this year. 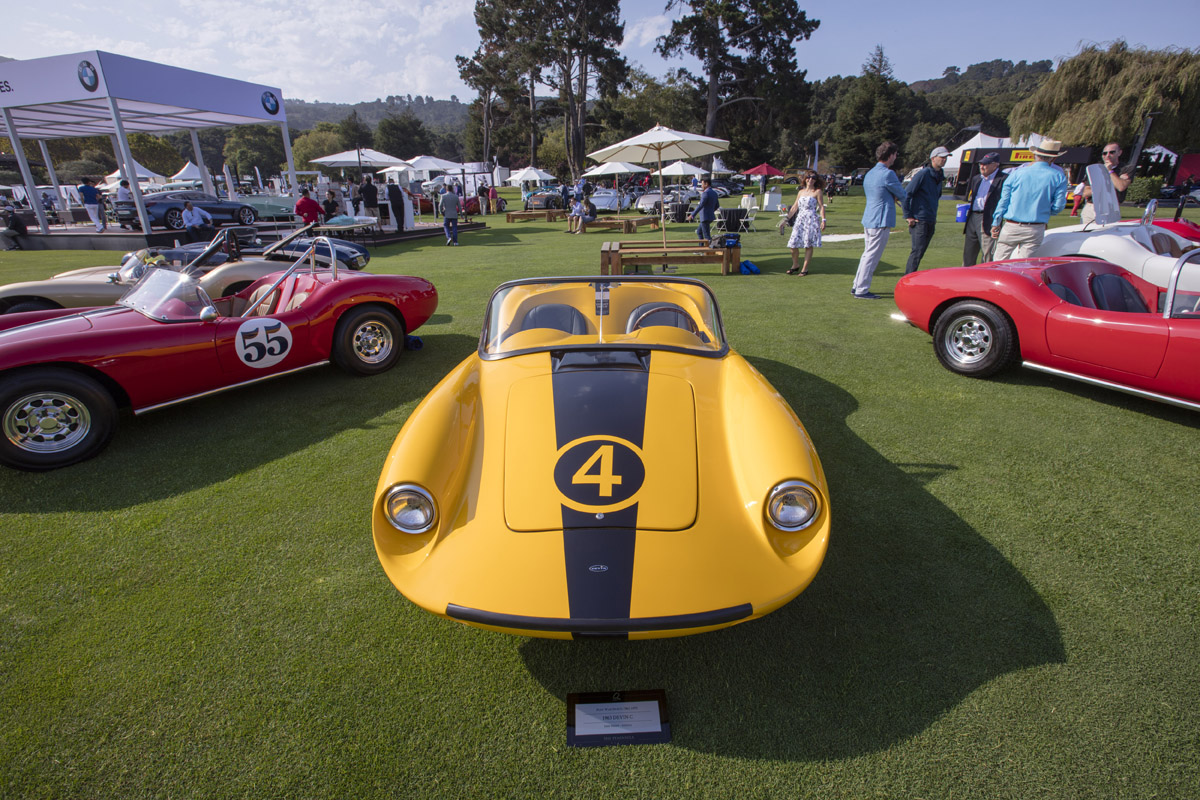 • Supercars: 1985 Ferrari 288 GTO, Bil Ceno: This car was photographed in San Diego, California with a Porsche 918 by Winston Goodfellow for the 2017 The Quail Poster. This car was originally purchased in the United Kingdom and used in Evo Magazine’s famous “The Ultimate Ferrari Supercar Test” issue in February 2004. 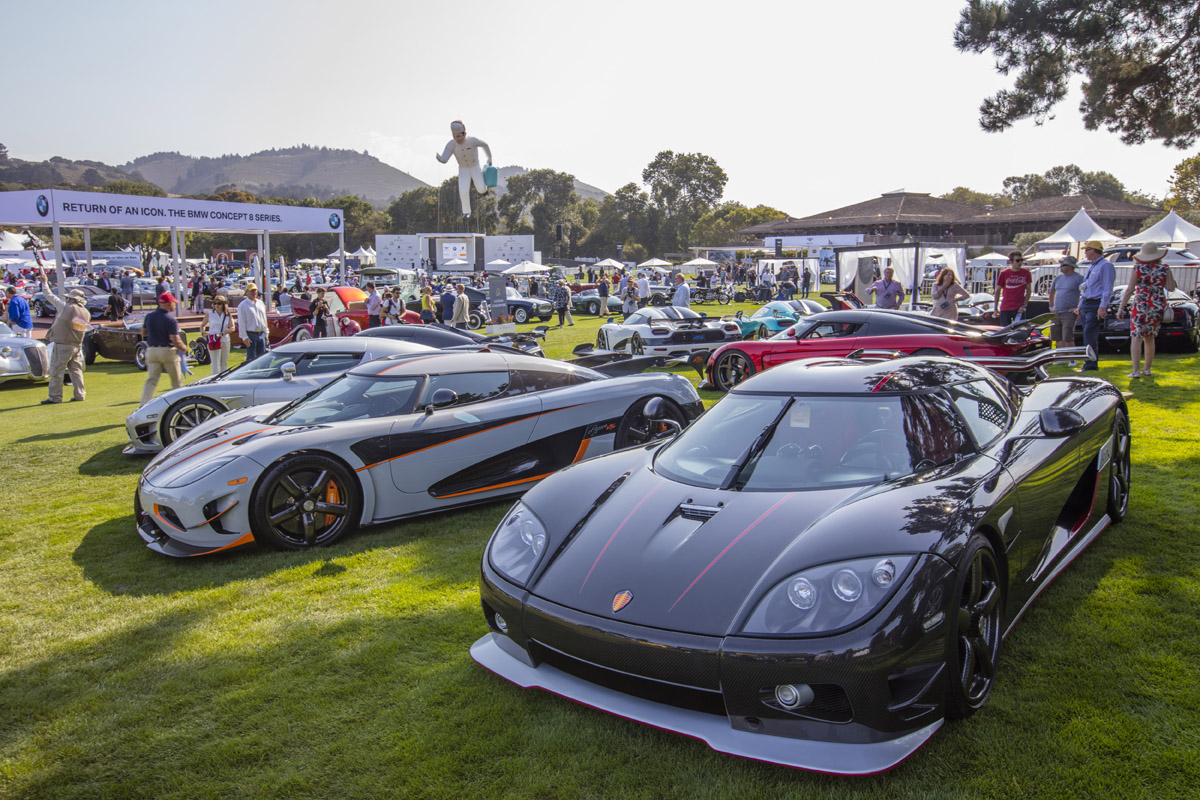 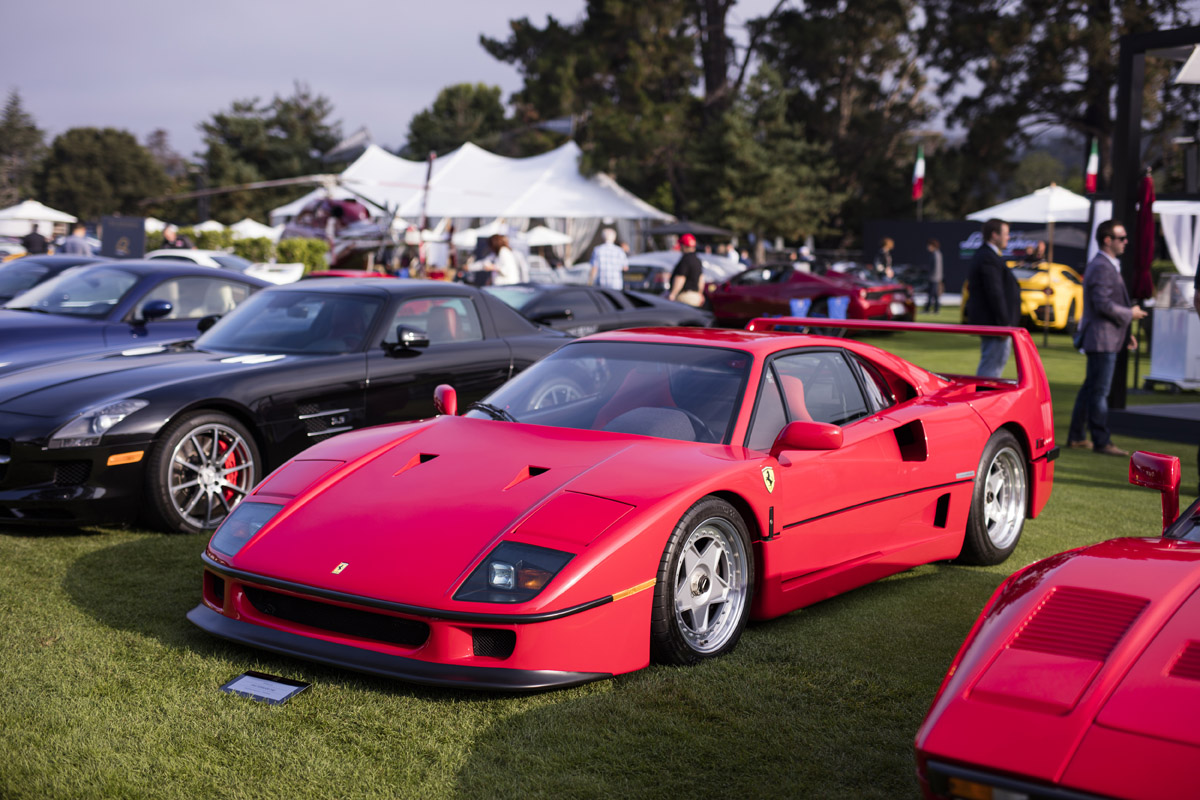 What is the synergy created between the Peninsula Hotel brand and these signature high-end events, like The Quail?

At the end of the day, The Quail event is about one thing – hospitality. It is bringing people together from all over the world to provide an experience unlike any other. And this is what the Peninsula Hotel brand does. A guest who stays at a Peninsula Hotel is one of a certain lifestyle – that same lifestyle as a The Quail guest – those who enjoy the finer things in life.

What is your favorite part about the event?

I love that the event truly is a fun, relaxing experience for our guests. I have attended other motoring events, and I have not experienced anything like The Quail. The intimacy, the vehicles on display, the camaraderie of like-minded individuals, the fashion, the delectable cuisine, all of it. It is truly like you are a guest at a high-end garden party, and there just happens to be some of the world’s finest vintage automobiles on display. You really do not have the have a passion for motoring to enjoy the event … but if you do have a passion for motoring, then there is an extra level of appreciation for The Quail.

What were some of the most memorable moments?

This year, The Quail set the stage for a series of national and global debuts. Acura and Team Penske pulled the sheet off for the world premiere of the Acura ARX-05 prototype racecar. Lamborghini debuted three one-of-a-kind vehicles that were curated through the Lamborghini Ad Personam custom design studio. Audi debuted the R8 V10 plus Spyder, open-top performance sports car’s first U.S. appearance.

The trio of special edition cars, including the all-new flagship Aventador S, the Huracán Performante and the Huracán RWD Spyder, were also revealed to commemorate the historic Monterey Car Week. The Karma Automotive Revero made its world debut at The Quail, accompanied by a beautiful piece of artwork by Bill Paterson created on-site.

Debuting for the first time, California-based Guntherwerks revealed their 400R, a bespoke Porsche 993 which will be available to twenty-five buyers on a custom order basis. Rolls-Royce also debuted a truly unique Dawn one-off, commissioned by Michael Fux, the savvy car collector and entrepreneur. For 2018, Maserati relaunched its iconic, four-seat grand touring car, the 454-horsepower GranTurismo, and displayed their first-ever sport utility vehicle, the all-new Levante.

Additional highlights included Mercedes-Benz’s 50th anniversary celebration of their high performance division, AMG. INFINITI’s display included the Prototype 9, a one-off concept inspired by a 1940s-style EV roadster built after company employees imagined what an INFINITI would have looked like during the golden era of racing.

The Quail continued its traditional Fireside Chat series with two conversations. In the first, Gordon McCall, Director of Motorsports at The Quail, moderated a discussion between Jon Ikeda, General Manager of Acura, Art St. Cyr, President of Honda Performance Development, Roger Penske, Chairman of Penske Corporation and Gil de Ferran, former Honda IndyCar Champion, about the iconic Team Penske and its new partnership with Acura Motorsports and Honda Racing in North America. In the second chat, McCall and Penske were joined by Danny Sullivan, 1985 Indy 500 winner, and talked about one of the most dramatic moments in Indy 500 history.

If you could give someone one piece of advice for next year, what would it be?

Register for the ticket lottery early! We are selling out earlier and earlier each year, and tickets are becoming a very hot commodity. The Quail is considered by many to be the best event during Car Week … be sure not to miss out on your opportunity to attend. 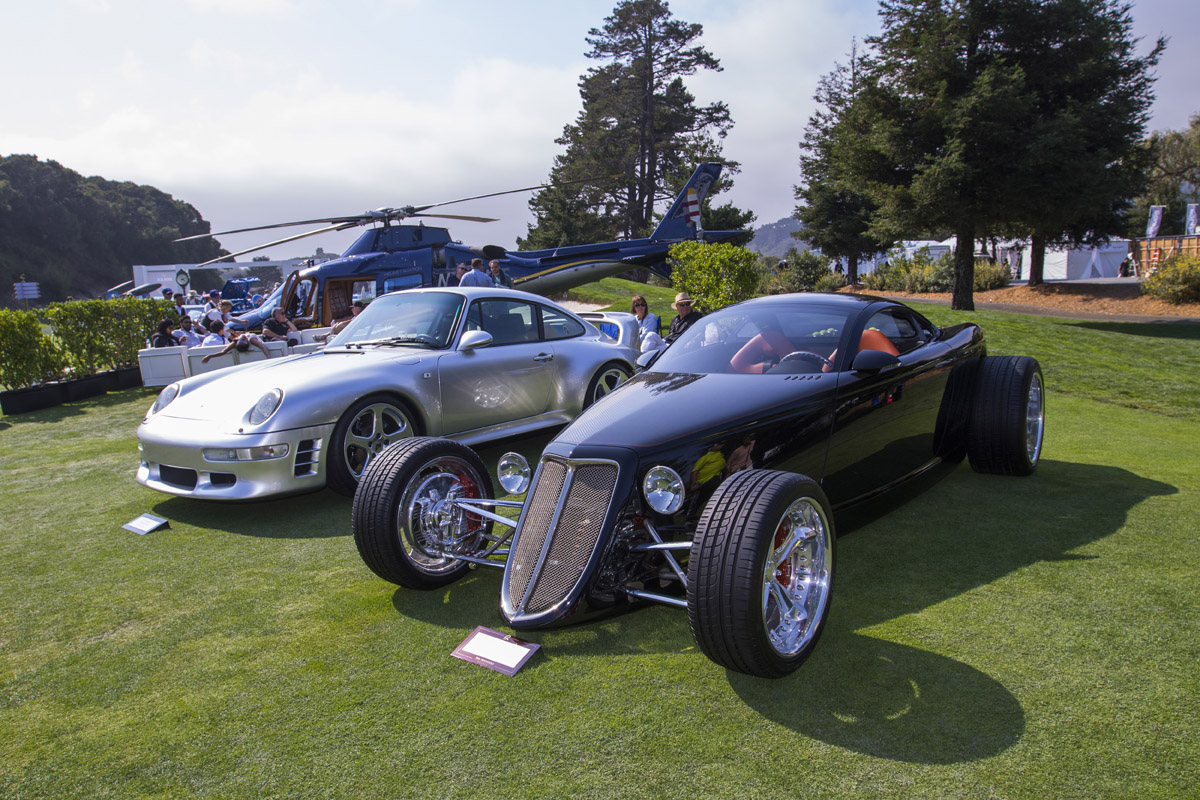 Behind the Scenes at Monterey Car Week’s The Quail

Behind the Scenes at Monterey Car Week’s The Quail