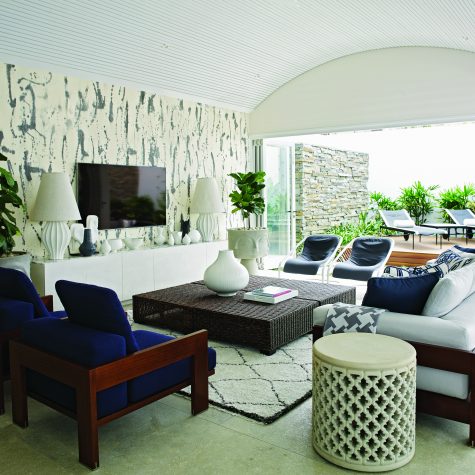 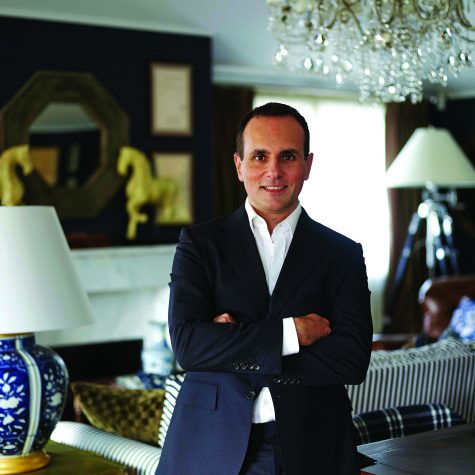 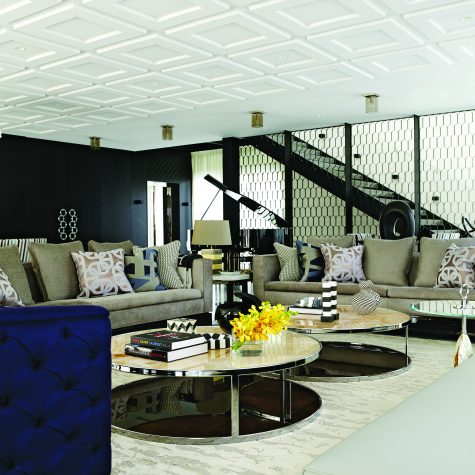 Greg Natale’s bold, tailored, and sophisticated approach puts him in his own category, and has led to his recognition as one of Australia’s most acclaimed designers.

With a new tile collection debuting later this year, two new rug collections and a second carpet line launching next year, and a major refurbishment of a hotel nearly completed, Greg Natale is the design world’s equivalent of the Energizer Bunny, if it just so happened to live Down Under. 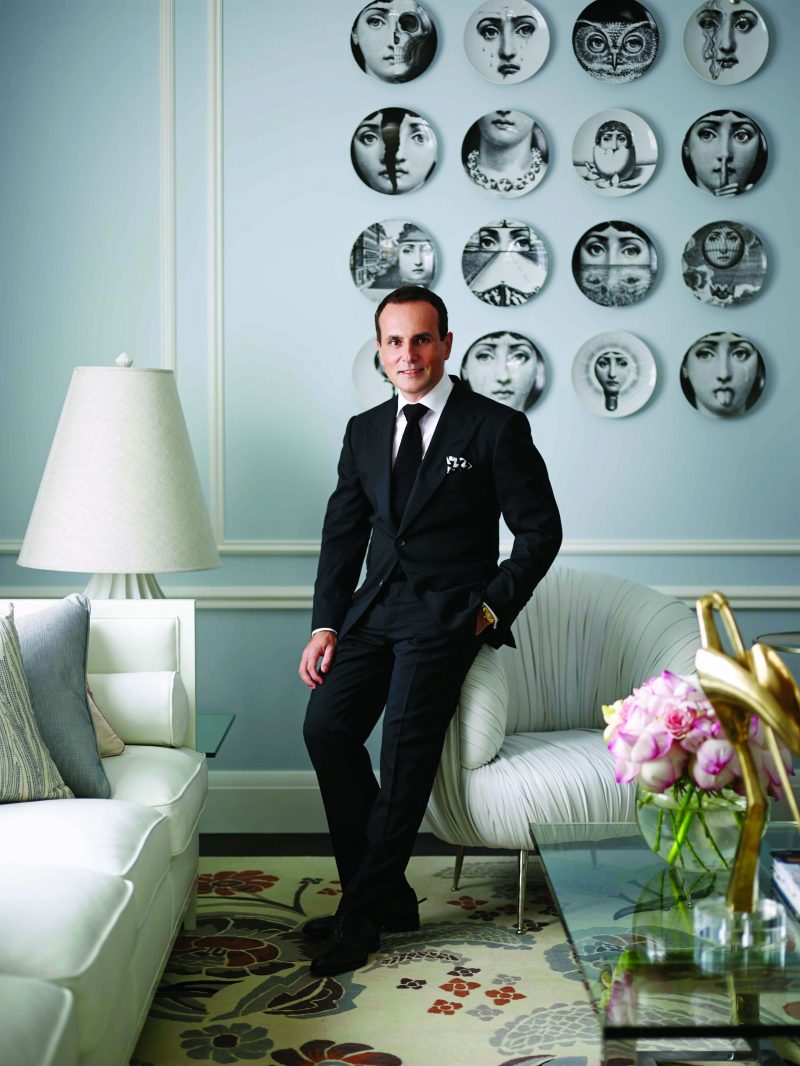 The Sydney, Australia-based interior designer embarked on his solo career with a project that others may deem low-key — designing his sister’s one-bedroom apartment. Natale made a splash by transforming it into a multi-award-winning space.

“I installed wall-to-wall, custom-colored Florence Broadhurst wallpaper, layering it with matching artwork and linen,” Natale, founder of Greg Natale Design, says. “The apartment was published in Australian Belle and the UK magazine Wallpaper* and won me my first award, the 2002 Belle Wild Card award, a category created especially for me. Since then, I haven’t looked back.”

Self-described as being “obsessed” with the realm of design since he was young, Natale grew up fascinated with the worlds he saw on television and in film. “The incredible settings showed me that there were endless creative possibilities and inspired me to design my own amazing spaces,” he explains.

Natale studied interior design at Sydney’s Design Centre Enmore, followed by visual arts at Sydney College of the Arts, and architecture at the University of Technology Sydney. In 1996, he received his first break at a residential design firm as a junior interior designer. From there, he worked in two more commercial firms before launching Greg Natale Design in 2001.

With a new head office in Sydney, the company has a strong connection to international design trends due to the city’s identity as a melting pot of style and culture. And, Natale draws even more inspiration from his travels to places such as Italy and India.

Among all of the available sources of inspiration, the team always keeps the Australian lifestyle in mind, described by Natale as “quite laid back, with a focus on outdoor living.”

“A lot of my designs are concerned with maximizing our abundance of natural light and spectacular harbor and ocean views, without losing any of the glamour and sophistication that goes into creating luxurious, livable interiors,” he says. 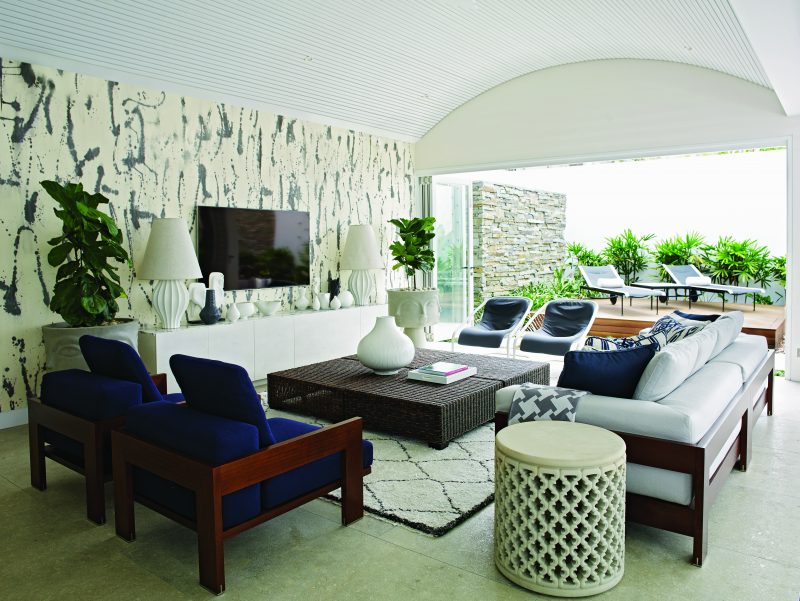 Natale describes his designs as bold, tailored, and sophisticated — a style inspired by icons past and present whom he considers design heroes.

“I still love the creations of the late David Nightingale Hicks and Vernor Panton, both of whom were masters at layering bold colors and patterns,” he explains. “Jonathan Adler and Kelly Wearstler count among my contemporary inspirations, while Tom Ford and the late Halston are fashion designers whose work I will always admire.”

Ever-mindful of the need to balance his style with each client’s personal vision, Natale approaches each project with a similar process — meeting with the client to uncover their goals and visiting the space to get a feel for its possibilities. “My role is to help clients realize their vision using my expertise. I think it’s important to inject their personality, which ensures that the design remains significant to them,” he says.

Initially, Natale serves as a bit of a detective, working to identify the ideal starting point for each project, which serves as a focal point throughout the design process. 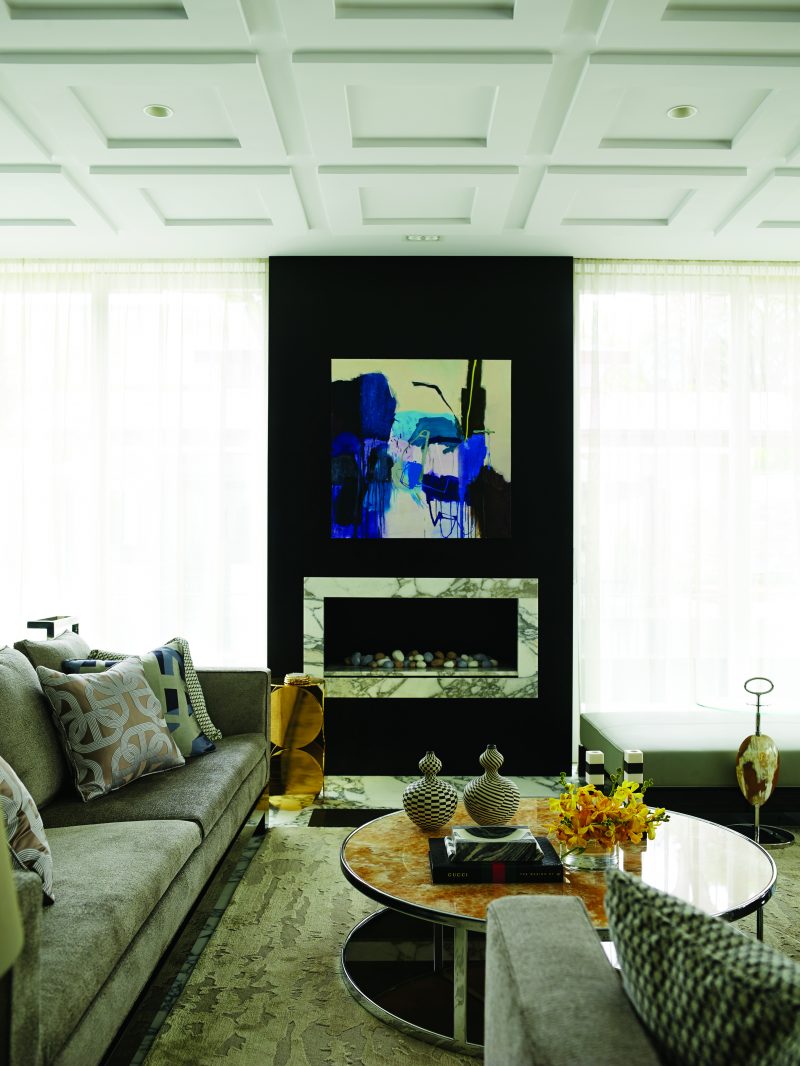 “I believe the first and most essential step in approaching a new design is to find the key factor that will set us on our journey. This could be a favorite possession, such as artwork or a piece of furniture around which the client wants to build a room or a look,” he explains. “The starting point could also come from the architecture of the house, such as the angles of its roof, the materials featured in its exterior, or the era in which it was built. Sometimes, the starting point might just be a mood or a feel the client is after.”

Natale aims to convey to his clients that the interior design process does not have to be an overwhelming task, and can be approached with a lot of common sense. The desire to communicate this message, combined with his long-term love of interior design books, led Natale to explore a new creative endeavor — producing his own book.

The Tailored Interior, published in Australia, the United States, and the United Kingdom, encapsulates Natale’s design philosophy and approach, and is chock full of images and tips that he hopes offer inspiration to emerging and established professionals, as well as aspiring home decorators.

For example, a core principle of Greg Natale Design is a strong belief that layering is the key to creating warm, livable, and welcoming interiors. A “considered, edited approach” also distinguishes his style. The book not only allowed Natale to refine his philosophy and approach, it also taught him a few things along the way.

“One thing I learned was how hard it is to edit your own work — selecting the perfect pictures to illustrate each point was a long and challenging process, quite like editing the design of a room where you need to make sure that every element has its place,” he says.

The Tailored Interior features two of Natale’s favorite Australian residential projects, for which he served as both architect and interior designer (with a co-architect, Hully Liveris, on the Brisbane property).

In Brisbane, Queensland, the three-story, four-bedroom modern residence boasts pops of bold colors elevating a monochrome palette, and curves offsetting angles. “It’s a study in balance and contrast,” explains Natale. “Taking the house’s angled roofs as a starting point, we echoed them in the interior through the use of lines and geometrics — for example, in diagonal timber treatments on windows and in paneled ceiling squares in the living area, which reflect the black and white marble floor squares below,” he says. “It’s a large space that could hold generous pieces such as two coffee tables and a long dining table with ten chairs. As a result, the look is full and layered — a bright, bold space with a contemporary deco feel.” 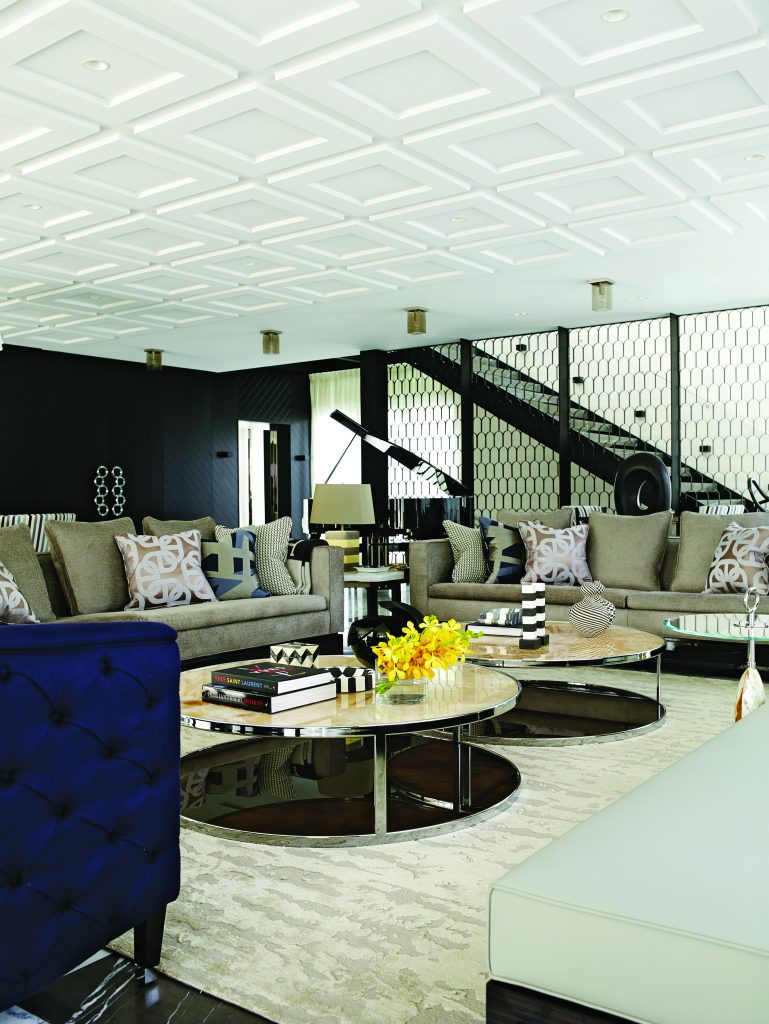 Another depicted project, a three-story, five-bedroom house in Sydney’s Tennyson Point, provided Natale the opportunity to reference the work of modernist masters he admires, such as Harry Seidler and Mies van der Rohe. A monumental, minimalist building constructed on Cubist principles, the home boasts plenty of light, natural stone, and expansive surfaces.

“This house maintains a connection between exterior and interior that is best seen in its single concrete interior wall, which echoes one outside,” Natale explains. “In the middle of the house, I introduced a circular, ribbon-like staircase that provides a deceptively simple organic feature among the other angles. Finished in the same warm travertine as the downstairs living areas, it draws everything together to great effect.”

For every project, a love for fusing design and decoration drives his company’s practice.The appreciation for décor that perfectly complements his designs and brings his clients’ vision to life led Natale to diversify his business, expanding into various home product collaborations, such as wallpaper, rugs and carpets, furniture, cushions, and tiles.

The products often are influenced by his travels; for example, the architecture and iconic arches of Rome’s Colosseum, which appealed to his love of repeat patterns, serve as inspiration for several pieces in the furniture line: Greg Natale for Worlds Away. 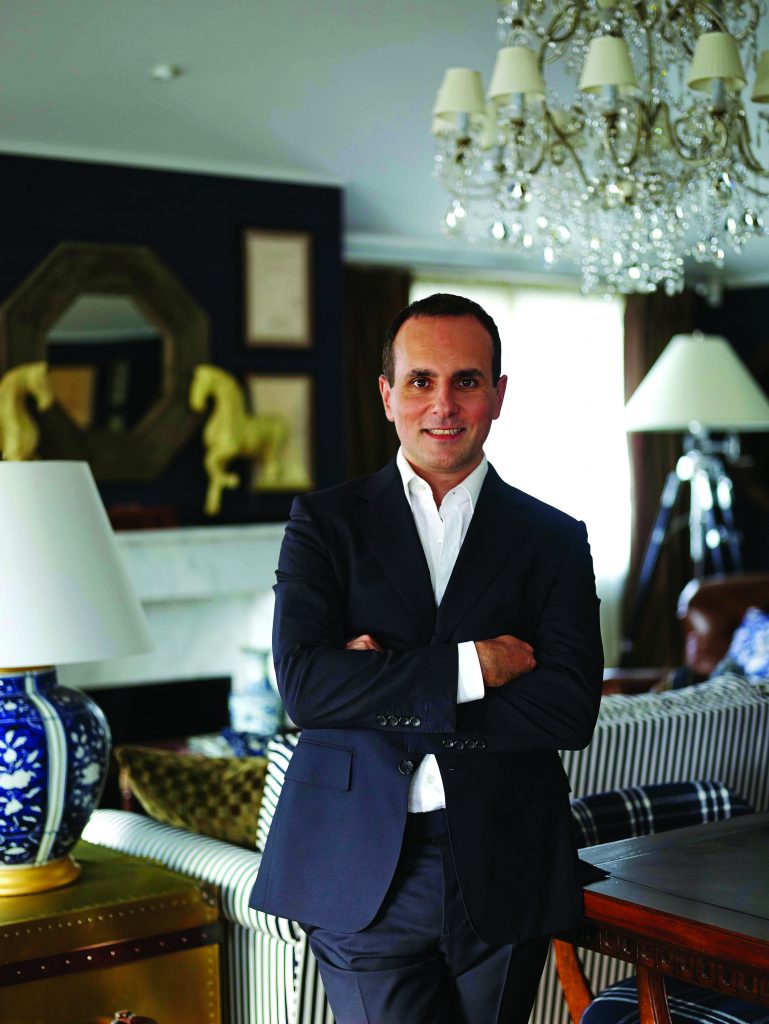 Most recently, Natale’s carpet, wallpaper, and furniture are featured in the nearly complete, major refurbishment of the Sebel Kirkton Park hotel in the Hunter Valley wine region.

Natale’s hallmark of paying homage to a setting’s surroundings comes into play in the grand, open entry hall’s light-filled atrium, where a custom-built circular bench allows those passing through the lobby to savor the streaming sunlight. The entry hall, reception, and atrium are outfitted in Atlantic Pearl, a sophisticated blue wallpaper from Natale’s collaboration with Porter’s Original Paints.

Yet, even as one project draws to a successful close, Natale always looks forward. He encourages potential clients to stay tuned to Greg Natale Design, mysteriously hinting at upcoming developments in the United States and New Zealand. His minimal free time is often occupied browsing Pinterest or savoring his apartment’s view of Sydney’s cityscape, but it too may be taken up soon by yet another project. “There’s that second book I would like to get started on,” he says.

“This article originally appeared in the fall 2016 issue of Homes & Estates.”