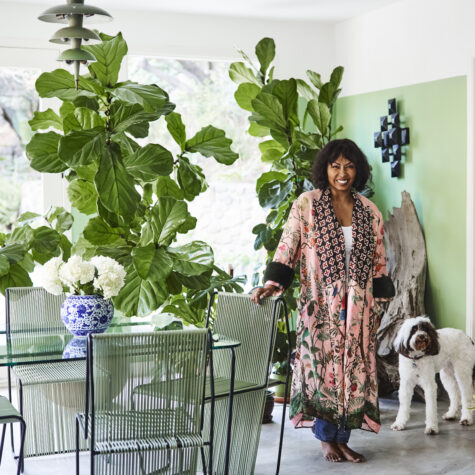 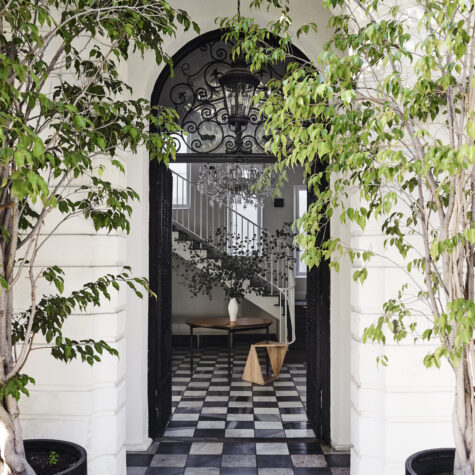 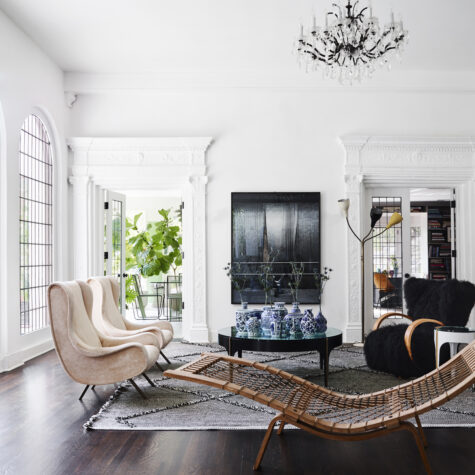 Our homes have always been the places where we feel the safest and most secure, where we feel most like ourselves. Now the idea of home as personal oasis has taken on new meaning in our pandemic world. We want our homes to be not just places of comfort, but also places of happiness. To Brigette Romanek, the idea of home as personal oasis is as foundational as creativity itself.

“A personal oasis is a place where you feel safe, surrounded by pieces and things that make you happy,” says the L.A.-based designer, who is among Architectural Digest’s AD100. “It’s a space where everywhere you look, there’s something that brings you a comfort that happens nowhere else. It’s a love letter to yourself.” 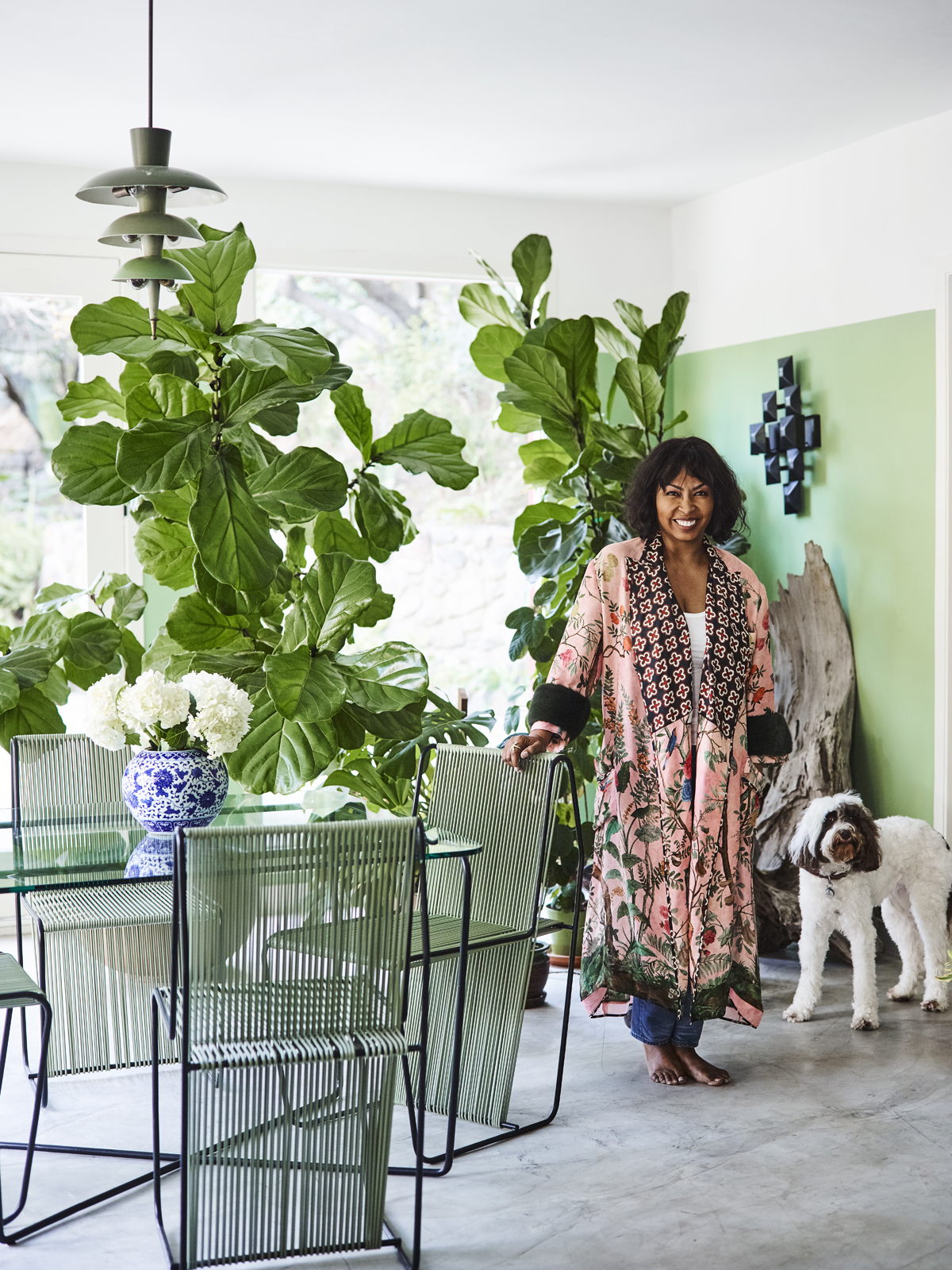 In the Laurel Canyon home she shares with husband and filmmaker Mark Romanek and their two daughters, Romanek’s love letter exists in the poetry of her patinated walls, the plants peppering her cozy solarium and the photography books lining the shelves of her library. Since her travel schedule has been reduced, she finds design inspiration among these densely packed, neatly arranged bookshelves: “It’s been great opening up books I’d forgotten about and seeing things that inspire me and charge me. They give me ideas and joy.”

Though Romanek’s portfolio spans from residential to commercial and retail projects and counts Eric Buterbaugh and Misty Copeland as clients, her personal home offers one of the best expressions of her eclectic, livable luxe aesthetic. Once home to rock legends and Errol Flynn in the 1930s, the 1925 Mediterranean carries a mythology that is as legendary as the personalities who once inhabited it. The couple purchased the home in 2014 from their friend, mega-producer Rick Rubin, who had utilized it as a recording studio and rock-and-roll dormitory for the Red Hot Chili Peppers, Marilyn Manson, Maroon 5, and LCD Soundsystem, among others. Before that, it was used as a recording studio for the Beatles, Jimi Hendrix and Mick Jagger in the 1960s and 1970s. A singer herself, Romanek felt an instant connection to the home. She was determined to honor the history of the manse.

“Embracing the quirks, and even featuring them, brings out the personality of the house,” she says. “There’s life in those walls and floors. There’s a history and such craftsmanship.”

While the mechanical, electrical, floors, walls and kitchen were completely redone, and the formal dining room was opened up to create an enlarged modern kitchen, she kept many rooms and the original details intact. She painted the old moldings (missing sections and all) a crisp, bright white. The hardwood floors and giant original arched windows remained. 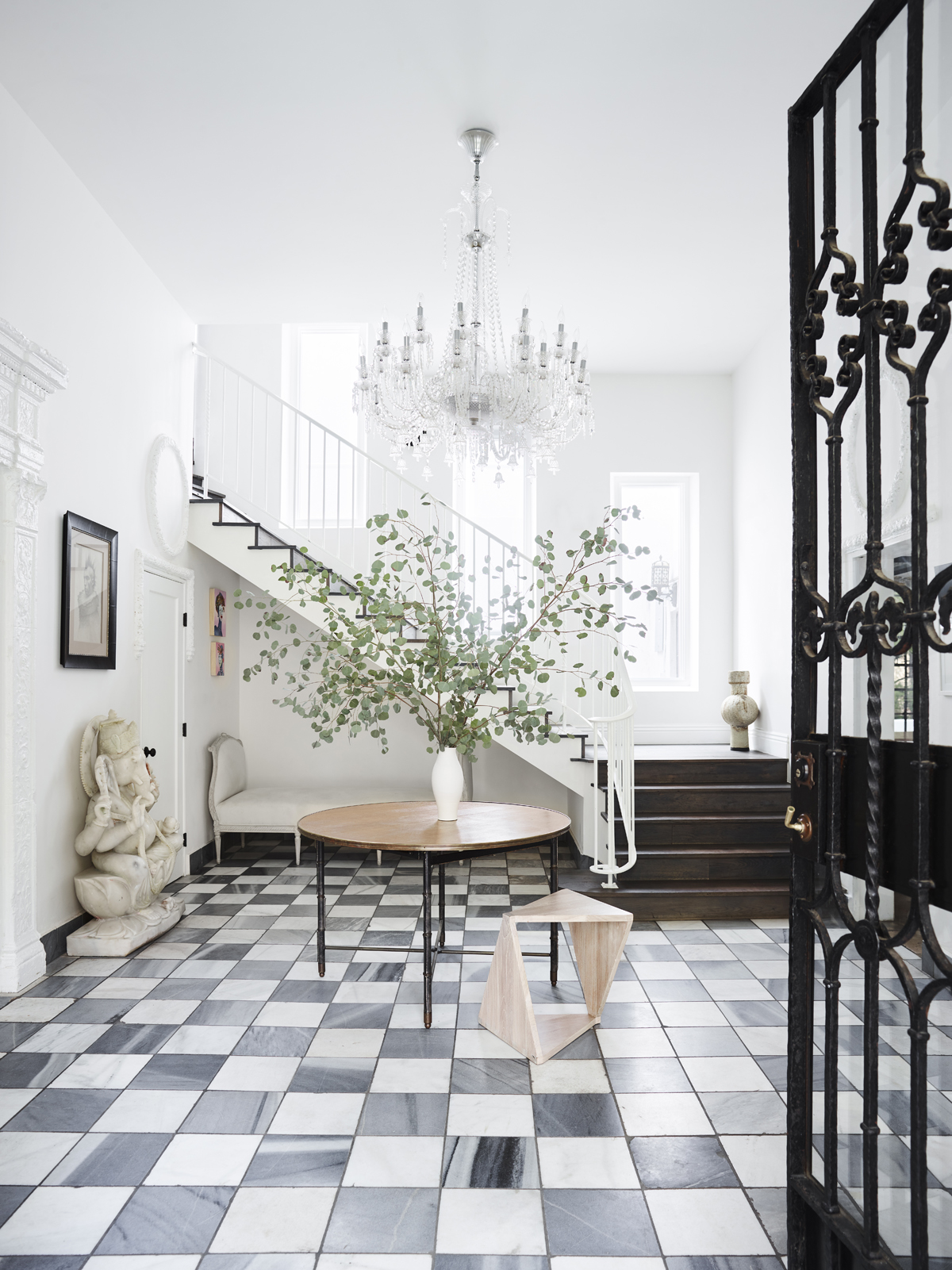 Then she let her mixing skills run wild. Black wrought-iron chandeliers and sconces were replaced with sparkly crystal fixtures and groovy vintage pieces. Dark terracotta floors in the entry were traded for bold gray and white marble tiles from a French château. High and low objets d’art marry an Old World decadence with modern function. Her “Gap-meets-Gucci” approach would eventually catch the eye of friends and design lovers. The rest is, as they say, design history. 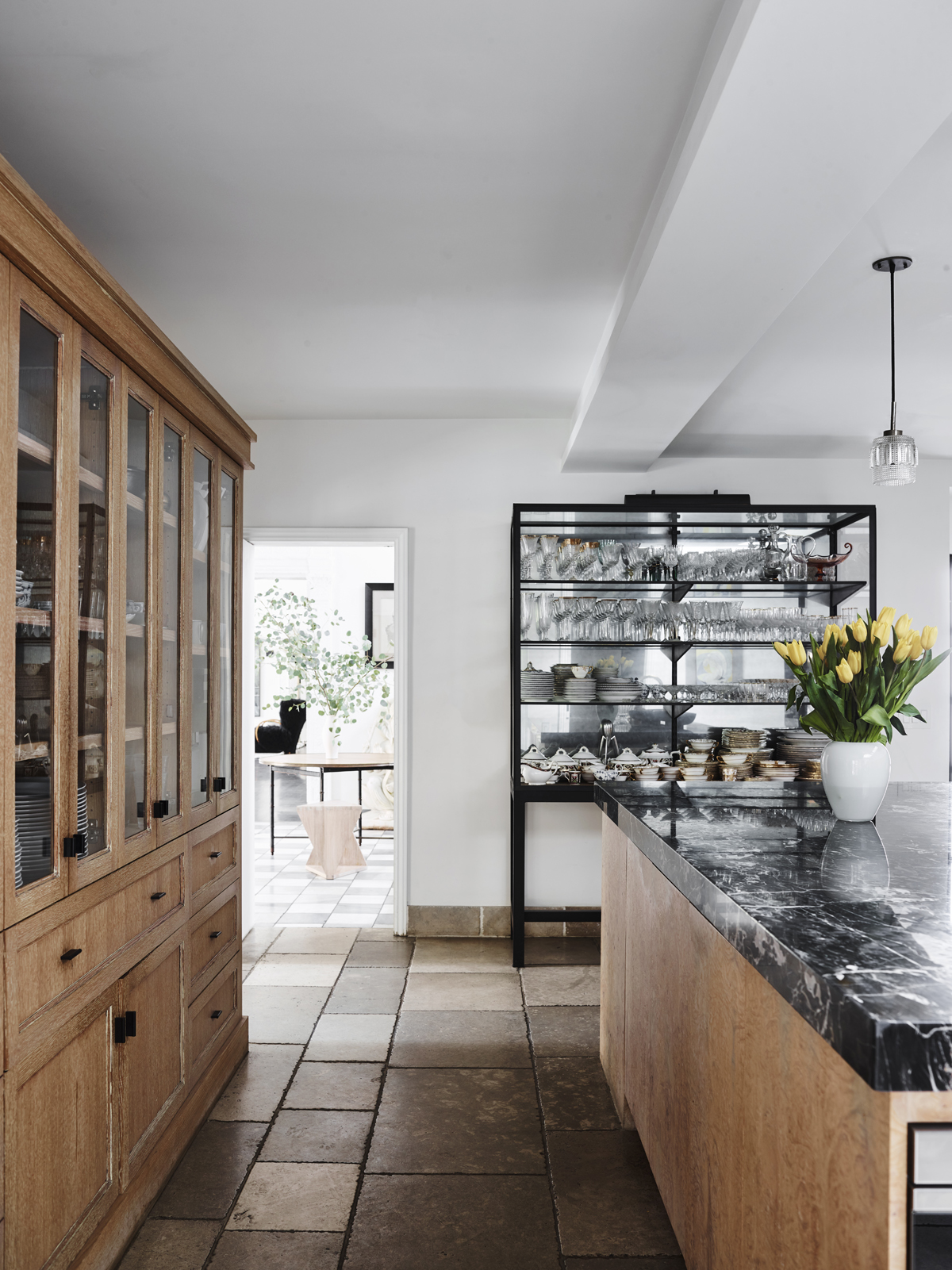 Eclecticism runs in Romanek’s veins. Originally from Chicago, she was a singer and a handbag designer before she turned her focus on interior design. Entirely self-taught, she is an instinctual designer — relying on intuition and a strong visual eye for what “looks right” in a room.

“I’m a creative soul,” she says. “All the things that I felt joy doing, I’ve done. I hope that joy shows in the end product. The through line is creativity.”

Today, that creativity is expressed in spaces that playfully layer textures, patterns and accessories. “Think about it this way,” she explains. “Everywhere one looks is a surprise…something new to discover.” 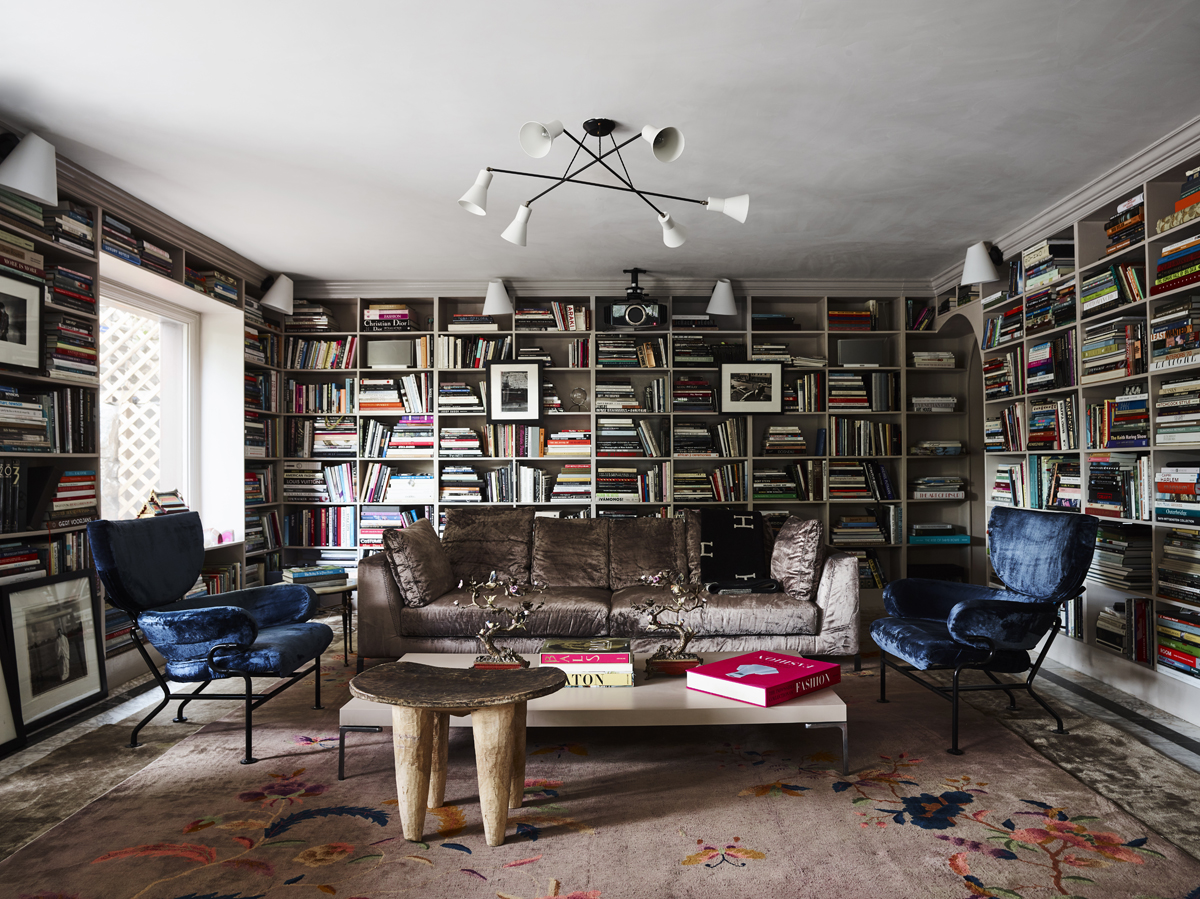 The element of discovery is what makes Romanek’s approach to interiors so fresh and exciting. She can take a classic canvas — like a 1920s California Spanish-style home or a Hamptons shingle-style abode — and transform it into a modern reflection of itself, as she did for entertainment executive Kent Belden and his husband, Dr. Louis Re. One of her signatures is unexpected pairings — like placing a Royère chair opposite a DDC sofa or adding 15-foot Japanese planters for warmth as she did in her grander-than-grand living room. 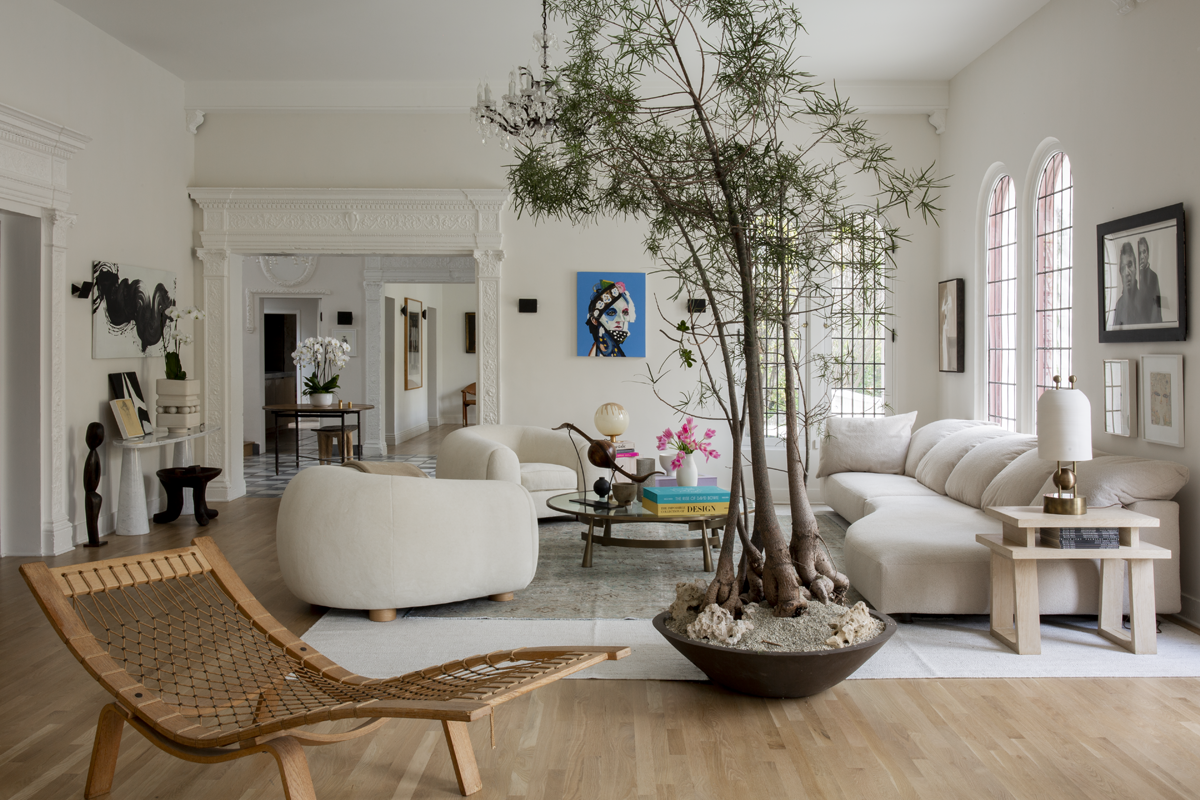 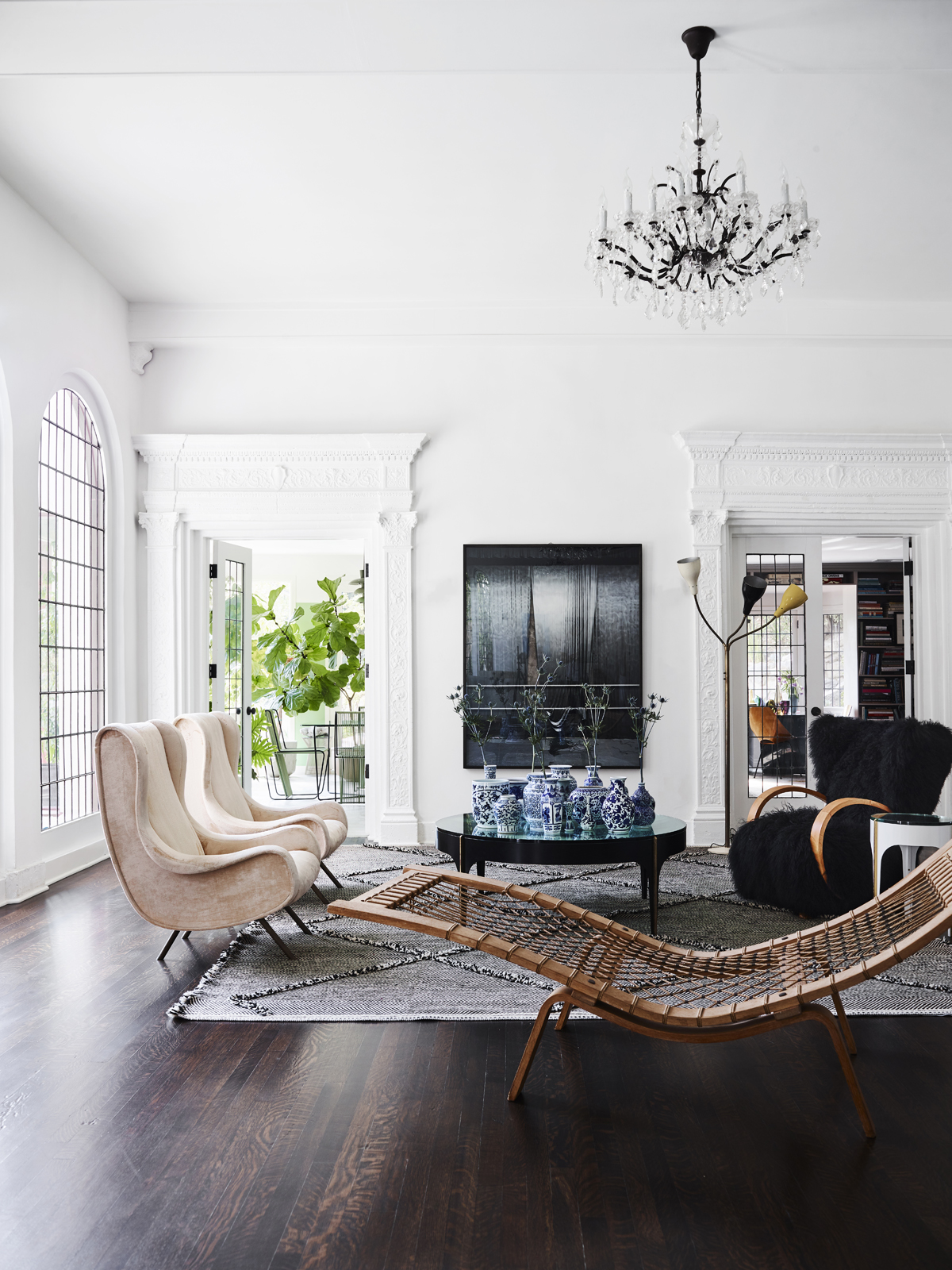 And then there’s her eye for juxtaposition and knowing just when to dispatch a dose of visual drama. She says her favorite way to work a vintage piece into a room is to think of it as a pièce de résistance. “Add one item of epic vintage, and it will speak for the entirety of the space,” she notes. Some of the most epic moments she has created in rooms were born from Charlotte Perriand sconces, beautiful vintage Persian rugs and a Gae Aulenti coffee table. Her hunt for “wow” pieces is constant, unrelenting. Discovery is not just for her clients, but for the designer as well. 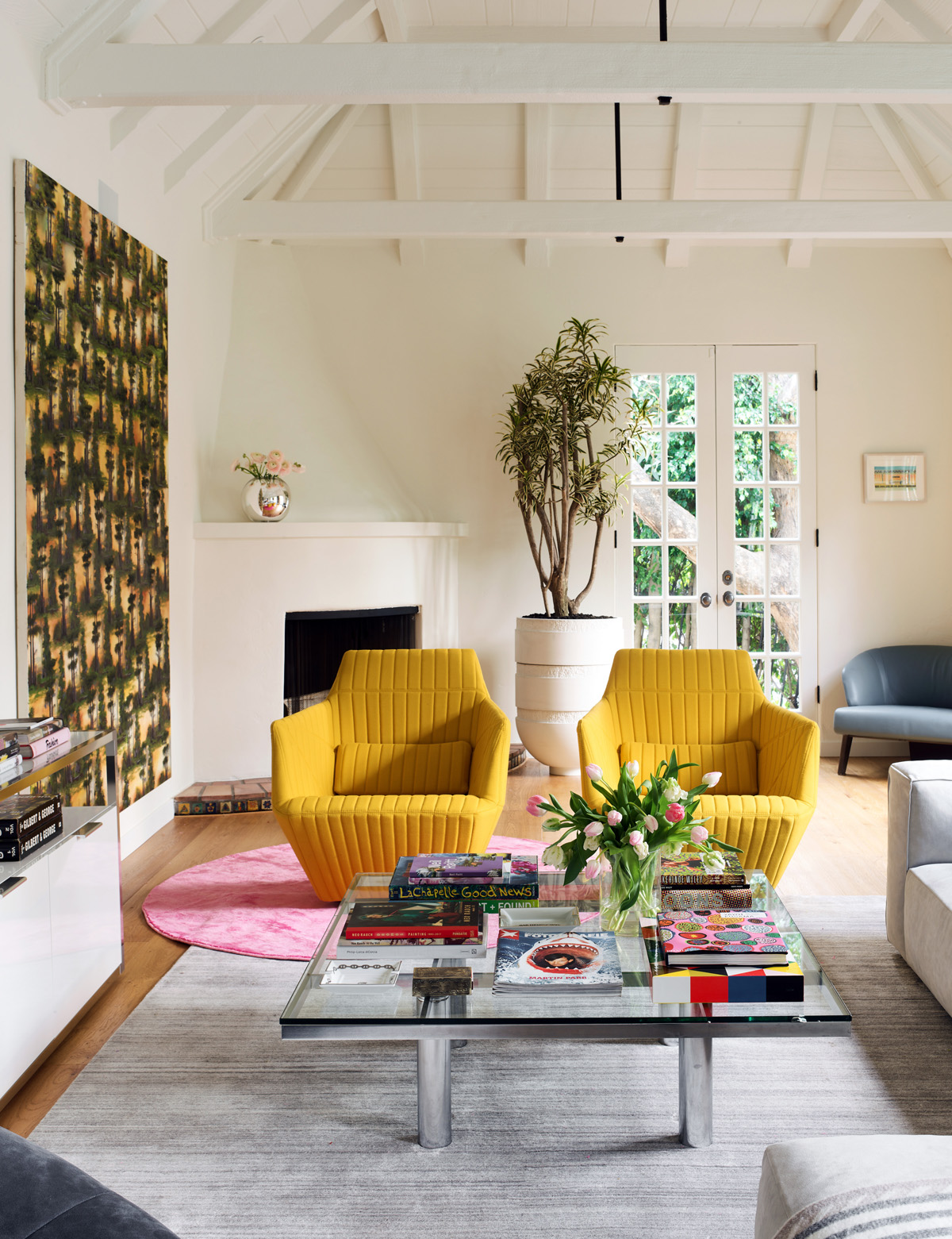 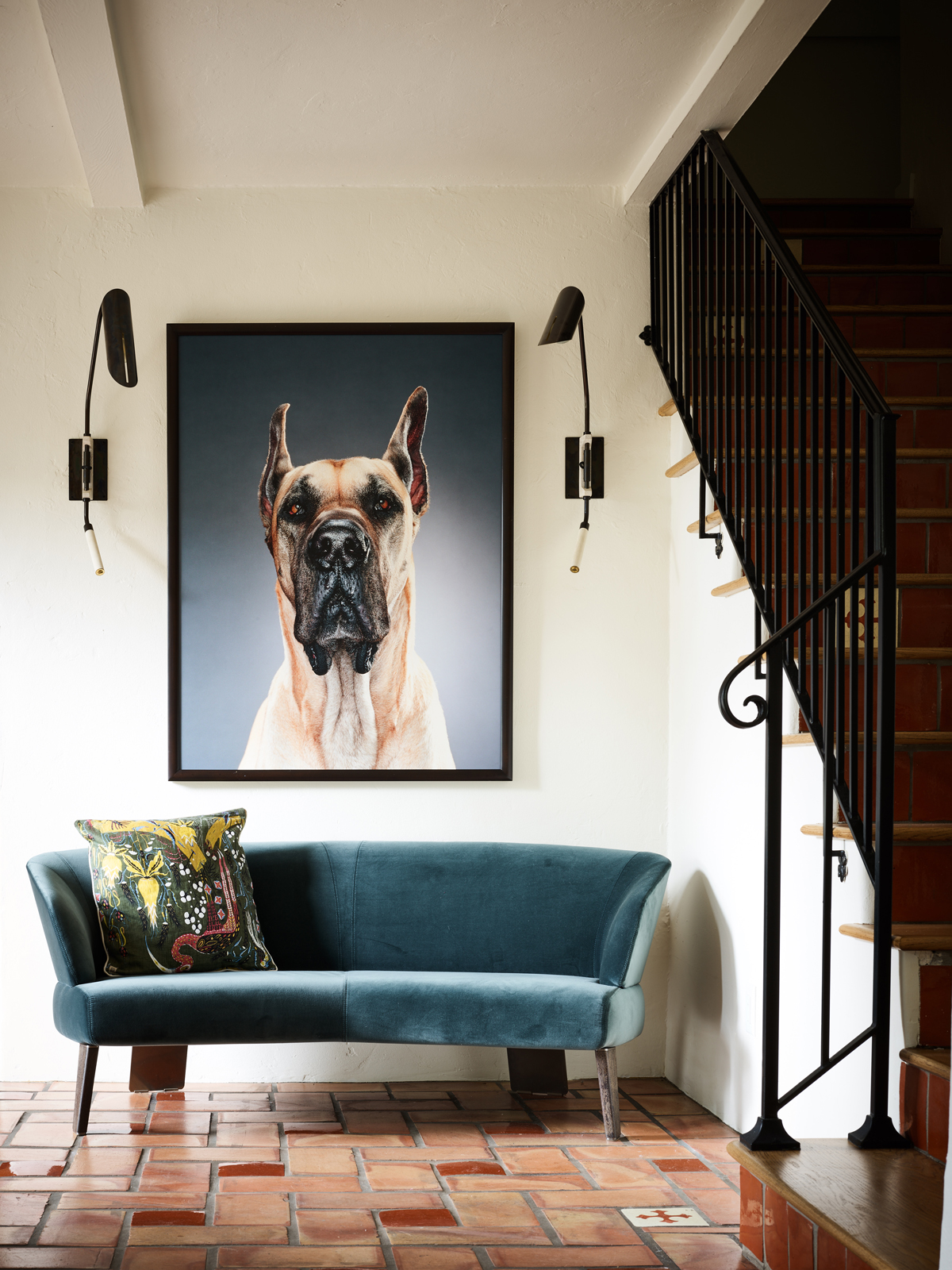 Romanek is now discovering new ways to be present to her clients, too, as some of them want to reimagine their spaces in quarantine. Whether they’re tapping her creative mind for a simple room refresh with more seating and lighting or a more elaborate backyard transformation into a main living space, Romanek is committed to ensuring that her clients feel that their homes are truly safe spaces: “I want their homes to be special and meaningful for them, and that’s always the plan.”

“A Love Letter to Yourself”: Brigette Romanek

“A Love Letter to Yourself”: Brigette Romanek