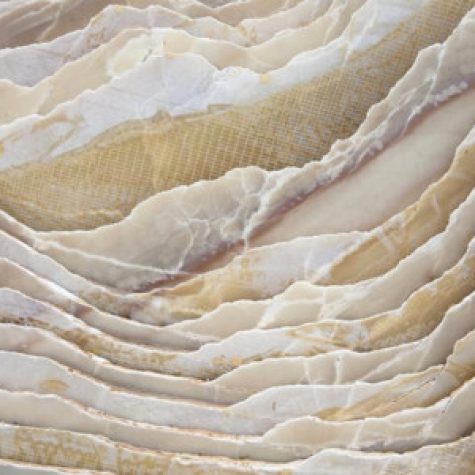 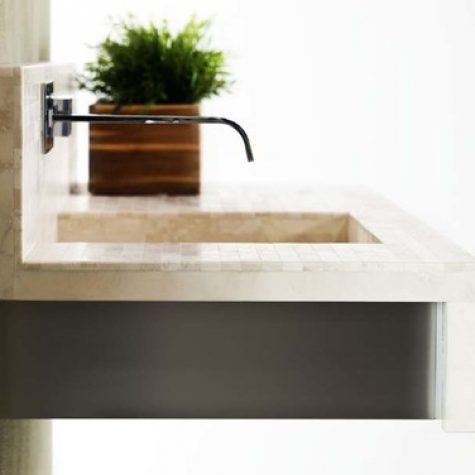 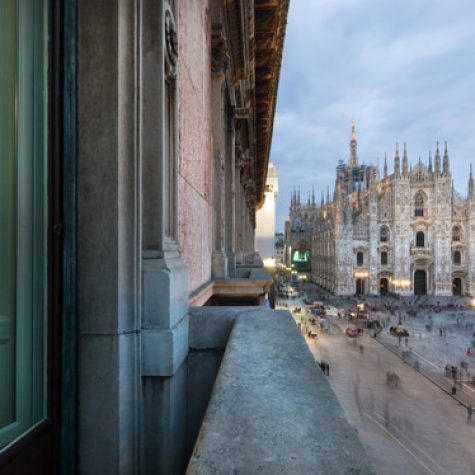 Marble, or metamorphosed limestone, is a beautiful natural stone, with each rock unique to where it’s found and how it was formed. It has been in existence for many millions of years, hidden in the ground before humans brought it to light. Thanks to marble’s colors, strains and special luster — as well as its versatility — artists, architects and designers have always loved the luxurious stone.

Though marble is quarried in many countries, it is closely identified with Italy, where marble formations are spread throughout the land. The most popular variety is white Carrara, which is extracted in the Apuan Alps in north-central Italy. Calacatta and Bardiglio marbles also are from this region, which is considered the most significant Italian region for the types and volume of marble extracted. However, there are many districts famed for other types of marble. Red Verona marble comes from Veneto, Portoro from Liguria, Pietra di Trani from Apulia and Custonaci from Sicily, to name just a few.

Find out more about this fabulous stone, from its tricky transportation in Roman times to the exciting innovations of today.

1. Why do architects and designers love marble so much?

“Marble has qualities such as long life, but it’s also a medium to express new shape, color and texture creativity,” says Davide Turrini, researcher and art director at Italian stone company Pibamarmi. Carrara is one of the most valued stones, he says, because it suggests sophistication and is “deeply rooted in history, well-established and universally recognized.”

“Marble fascinates us because it reflects the [desire] to go back to the value of long-lasting materials,” says industrial designer Raffaello Galiotto.

2. How have extraction and transportation techniques changed?

“Extraction techniques documented in Roman times were based on the exploitation of the main fracture lines in the marble,” says Giovanni Massa from the Center for GeoTechnologies at the University of Siena. “With hammers and metallic scalpels, they created the so-called caesura cut on the marble, then enlarged this cut by hitting it with sticks, iron or wooden wedges until it opened.”

In the 18th century, thanks to the introduction of explosives (black powder), quarrying operations became much faster. However, massively increased production became possible only with the introduction of special machinery in the 19th century, such as the wire stone, or helicoidal, saw that allowed the cutting of many blocks at once.

“But the real revolution in extraction happened just 30 years ago with the introduction of the diamond wire and the diamond chainsaw, actioned by powerful machinery that can work both plain or at predetermined angles,” Massa says.

In Roman times, there were two ways to carry marble blocks down to the valley: sliding them freely from the mountain (a dangerous method that damaged the stone) or transporting them on a lizza, a sort of wooden sledge controlled by strong ropes. These sledges slid along slipways created for this purpose. To this day, the “lizza ways” are visible along the hillsides of the Apuan Alps.

The lizzatura system was abandoned only after the Second World War with the arrival of heavy vehicles with tires. The spread of the railways made marble transportation and trade easier, resulting in wider demand.

3. Which countries import the most Italian marble?

The demand for Italian marble is high around the globe. The total export value in 2015 of raw, finished and semifinished stone was $3.5 billion, according to a report by stone industry organizations Marmomacc Observatory and Confindustria Marmomacchine, based on Italian National Institute of Statistics data.

The United States has the highest demand for finished and semifinished stone products, followed by Germany, Switzerland, the United Kingdom and France. The demand from the Middle East, particularly the United Arab Emirates and Saudi Arabia, is growing, while exports to Russia remain stable.

China and India are the biggest markets for Italian raw stone material, but Italy exports to some 140 countries.

This success is due to “Italian know-how in stone processing and production of new manufacturing technologies, but also in innovation and design. This is our added value that makes us really competitive all over the world,” says Maurizio Danese, president of Veronafiere, which produces the Marmomacc international trade fair, an exhibition in Verona, Italy, for marble blocks and slabs. It’s the main event for the marble world.

The Apuleio lamp, made of white Carrara marble, was designed by Michele De Lucchi and Philippe Nigro for Pibamarmi.

4. On what do the purity of color and veins depend?

“Marble stones can be found in different geographical areas and in different countries,” says Luigi Carmignani, professor of applied geology at the University of Siena. “Aesthetic color and ornamental characteristics make every marble type unique and typical of its own extraction area. In some cases, these characteristics can be so peculiar that, even in the same geographical area, one single type of marble can be considered exclusive to the quarry from which it was extracted.”

“The lithological and mineralogical characteristics that define the color, purity and pattern of the different types of marble depend on many factors,” Carmignani says. “In particular, color is often taken as a distinguishing factor. In marble stones, it results from the more, or less, abundant presence of evenly spread or concentrated minerals within the rock.” These can include, he says, microcrystals of hematite (a shade from pale pink to brick red), chlorite (light green to dark green) and microcrystalline pyrite (light gray to dark gray).

“In contrast, the total absence —or presence in minimal quantities — of the minerals described above gives the marble a typical color shade from pearly white to pure white, because it essentially consists of calcite, the main constituent of the rock,” he says.

“The texture — that is the exquisite pattern we can admire on the surface of a polished marble slab — is defined by the size, shape, orientation and arrangement of the inclusion of different materials,” Carmignani says, “and by the spatial allocation of veining and its color, which depends on different mineralogical composition.”

5. Does a lightweight marble exist?

Each kind of marble has a different specific weight, but the “heaviness” remains a positive quality rather than a defect. This is less welcome, however, when we want to craft objects in shapes and with characteristics that using solid marble won’t permit.

Margherita Ricciardi of Nice&Square says its patented Stonewave system meets this challenge. The product, pictured above, consists of a custom-shaped, super-light aluminum structure covered in hand-finished marble slats. It’s one-third lighter than solid marble and, thanks to the support, strong and resistant to bending. It’s possible to produce lengths of up to 13 feet without a joint. It’s also environmentally friendly: Its marble comes from materials recovered from the processing of marmette, 0.39-inch-thick tiles.

Find wall and floor tiles for your home

6. What finishes are used today?

“Polishing is only one of the ways many marble materials can be finished. Nowadays, it has become a specific choice more than a tradition to follow,” says Alberto Bevilacqua, CEO at Lithos Design, one of the first companies that in 2007 believed in the potential of relief decorations on marble sidings.

Thanks to CNC machines — machines with numerical control — today it’s possible to carry out many works on stone surfaces that only a few years ago couldn’t be imagined.

“That’s why today we can talk about [stone] design and also an industrial approach to decorating this material,” Bevilacqua says. “Now we are able to obtain something that working by hand couldn’t achieve, and create different products that are complementary to the handcrafted and artistic ones.”
“First of all, technology allows extreme precision, as well as consistent work quality without imperfections, which are part of the traditional handcrafting work. It also allows the development of new kinds of products that could not be created with traditional technology,” Bevilacqua says.

“The industrialization of marble-working for architecture and decoration is not recent, but the cutting-edge applications of CNC technology open up brand-new, interesting scenarios and possibilities for developing new product designs and producing great quantities for low costs and with less waste.”

7. Is experimentation possible with marble?

“For several years now, I’ve dedicated myself to researching new shapes obtainable with marble,” says Raffaello Galiotto, an industrial designer with great experience in the innovative use of this stone. “When we analyze ancient objects made of natural stone, not only do we understand the geological era they belong to, but also the manufacturing technique used to craft them. I think it’s not just necessary — it’s our duty to use means that didn’t exist in the past. This is how we record our present-day life.

“I believe new technologies represent a great opportunity to both lighten people’s labor and create new things. For example, I devote a part of my research to optimizing the use of molded cuts to create forms that can be used in both positive and negative space. It’s a different way of designing that helps to reduce waste.”

Since 2014, Galiotto has been curator of the Design and Architecture Pavilion at the Marmomacc trade fair. The industrial designer shows what you can do with marble thanks to technology — pushing it to the limits and beyond. This research helps stimulate the market to create innovation out of a material that dates back millions of years.

“Everything is still to be invented: Marble offers incredible exploratory possibilities, and the deeper you ‘dig,’ the more you find — in every possible way,” Galiotto says.

Agave is a 10-foot-high hollow cylindrical sculpture made from a block of marble measuring 31.5 by 11.8 by 0.78 inches. The material was initially cut into 10 slabs. Then, using five-axis water-jet technology, it was possible to cut the inner side of the marble block and obtain numerous rings, which were stacked into their final shape with the help of 3-D modeling software.

8. Where was the marble for Milan’s Duomo quarried?

The Duomo, the Gothic cathedral that’s the symbol of Milan, was constructed of Candoglia marble. This material has been extracted from the same quarry for more than six centuries and is still used for restoration work.

For the construction of the Duomo, the duke decided to replace the clay bricks typical of the Lombard era with this beige-white marble with pink streaks, extracted from the quarries of Candoglia in the Ossola valley, west of Lake Maggiore.

For this purpose, he assigned the Candoglia marble quarries to Veneranda Fabbrica. Thanks to a system of channels and sluices, the marble was transported for free to the Duomo along existing waterways — the Toce River, Lake Maggiore, Ticino River and Naviglio Grande canal. Since 1920, the marble has been transported by road.

Even now, the Fabbrica takes care of all the maintenance and restoration work on the cathedral, from the quarrying of the marble at the Candoglia quarries to the carving at the marble workers’ site (Cantiere Marmisti) to the placement of architectural and decorative elements at the Duomo construction site.

How to Clean Marble Countertops and Tile
Carrara vs. Calacatta Marble: What Is the Difference?
Kitchen Counters: Pros and Cons of Elegant, Timeless Marble