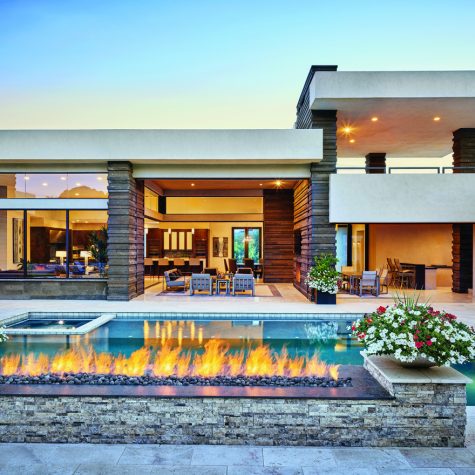 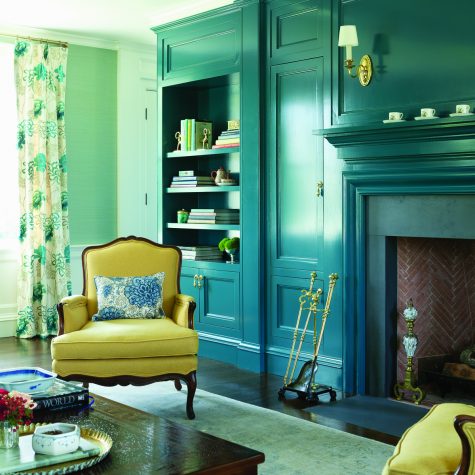 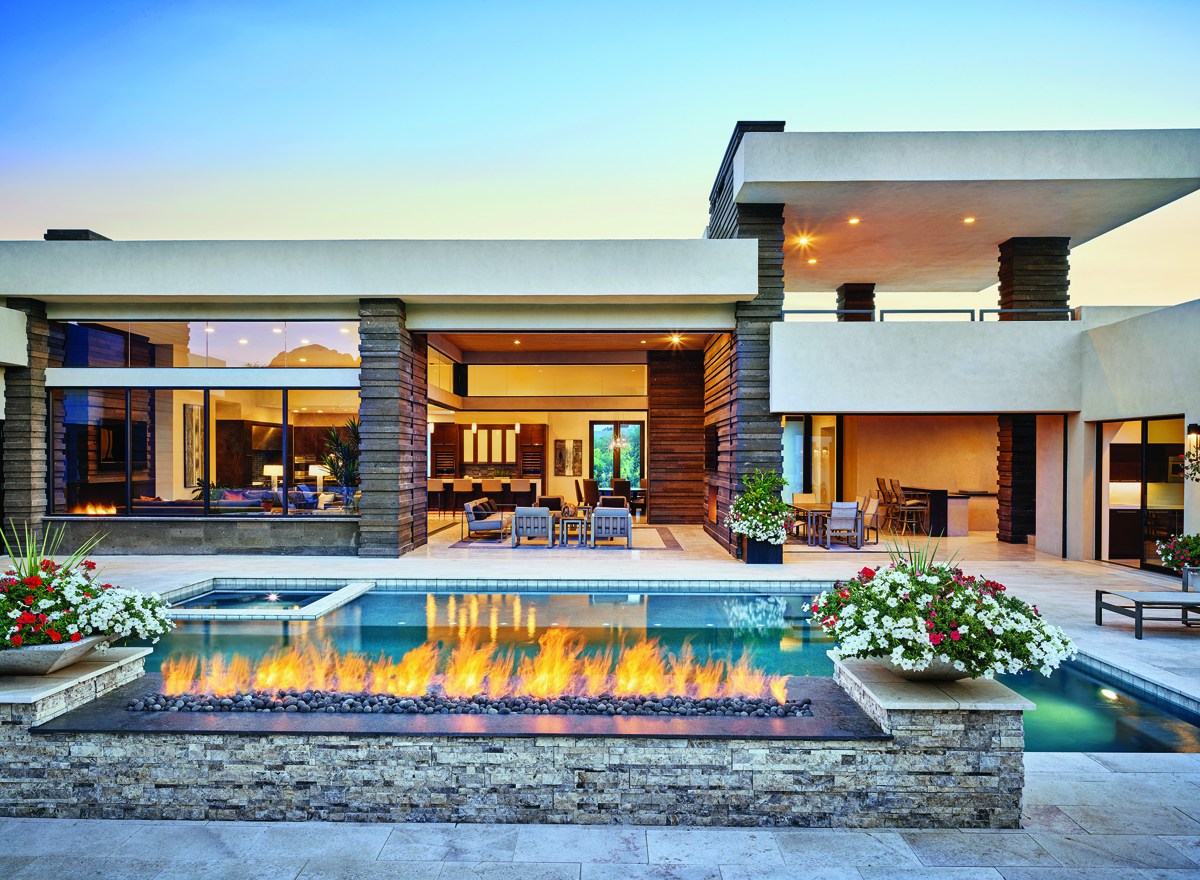 While they serve as indicators of what’s hot and what’s not, trends can be tricky, especially when applied to higher priced properties. If anything, affluent homeowners shy away from the notion of trends, but still want homes to be current, elegant, comfortable and, most importantly, exclusively theirs. “A color or trend becomes viral instantly, and suddenly you see it everywhere,” says San Francisco designer Jay Jeffers. “My clients don’t want this. They want their home to feel uniquely their own. We may use currently popular colors and fabrics, but in the end, each home is very special.”

Even more influential than the color of the day or the newest smart gizmo are changing attitudes among the affluent toward house and home. “I think now there is an increased emphasis on the home. People are into design and their home,” says designer Shawn Henderson, who is a member of the AD100. “Some people want more of a trophy home, but the majority want to feel good. They want their home to feel pretty and function well and be sort of an extension of them.”

“People want to LOVE their home. They want comfort and convenience, but do not want to sacrifice chic,” says Jeffers.

Few are also willing to compromise on comfort. Home has become a place to decompress, a refuge for family and friends ideally adaptable to a range of activities and quite often ages. “Families especially do not want a home that is too precious. We have many clients who entertain frequently — both small and large events for charities and such — but then they may also be hosting 30 six-year-olds. Their homes must be able to function and survive with all these options,” shares Jeffers.

For designers, the challenge becomes creating interiors that are of the moment, but with an overall style that lasts well beyond the moment. “There is a lot of focus on creating very personalized interiors that also have lasting qualities. So, while we might incorporate something that is a trend right now, we’re also thinking about, you know, we don’t want this to look dated in two, three years, right? So, it’s a balancing act really,” observes Anelle Gandelman with Manhattan design firm A-List Interiors. “Right now, we’re starting to see a lot of things from the ’80s return,” she says. “Brass is coming back, but not the polished, shiny yellow brass of the 1980s. This is more refined, a little more subtle, darker antique brass.” 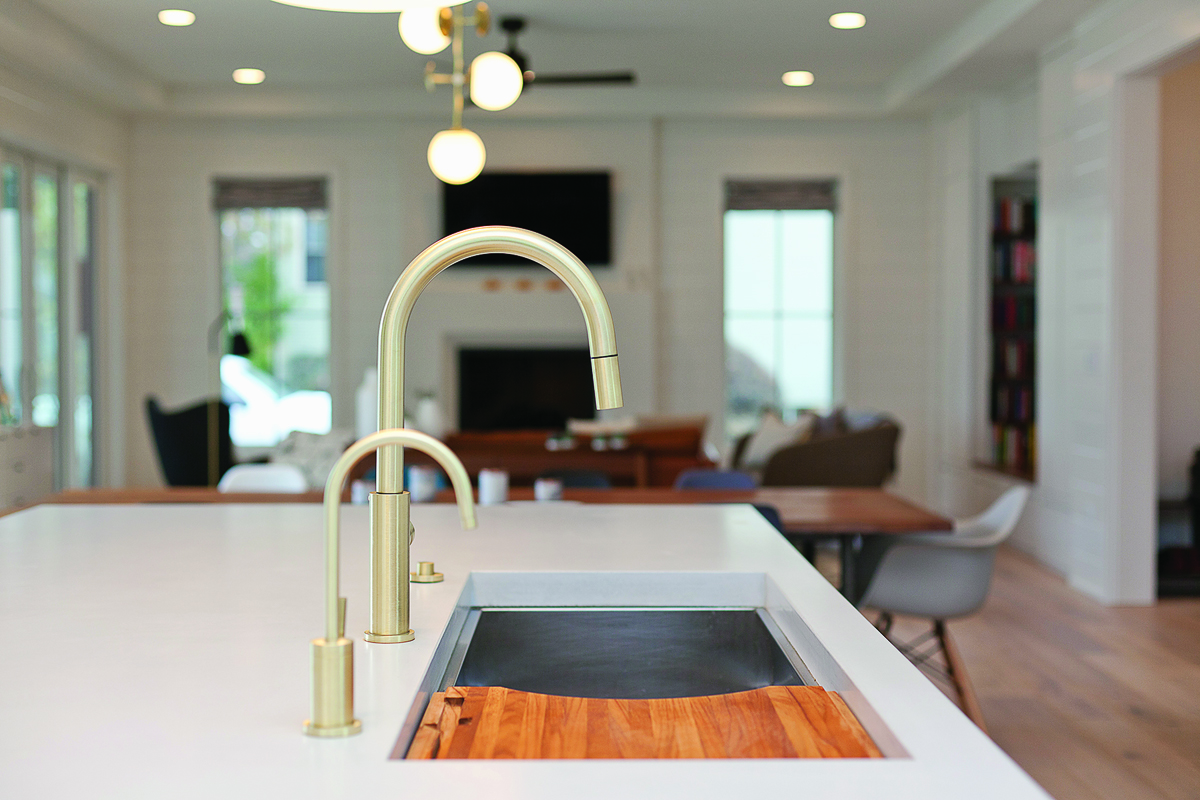 Hints of brass and gold could be spied at design shows as recently as a couple of years ago; this year, brushed and satin bronze and gold along with oil rubbed bronze and even black dominated exhibits. Although featured usage was faucets and hardware, shiny warm accents are turning up in furniture and lighting. It’s all part of a design evolution toward warmer finishes, which Gandelma expects to be more than a transitory influence on interiors.

“We don’t think of this as an overnight one. I think it’s going to stay a bit longer.”

As the ongoing shift toward contemporary architecture continues, a new modern aesthetic is taking shape. Instead of a composition of hard-edged, white linear forms, modern elevations today appear as an overlay of shapes and forms defined by disparate materials and textures such as stone and brick or even a single stone applied in varied directions. Defining spaces using mixed materials is a growing practice, according to BALA judges. Outside In, a modernist home in Paradise Valley, Arizona, from Bedbrock Developers, took top BALA honors this year. Architect Drewett Works and Ownby Design employed textural components, such as Negra Canta stone, to define spaces and also echo the surrounding landscape. An indoor/ outdoor synergy continues to be an essential, organizing factor. Not only are visual connections strong, but entire living areas, which can be seen in Outside In, open to outdoor spaces with little or no transition between the two. Disappearing doors, few thresholds and using the same flooring inside and out brings spaces together. Even on the smallest of lots, developers and architects are finding ways to incorporate outdoor living, often making best use of side yards. 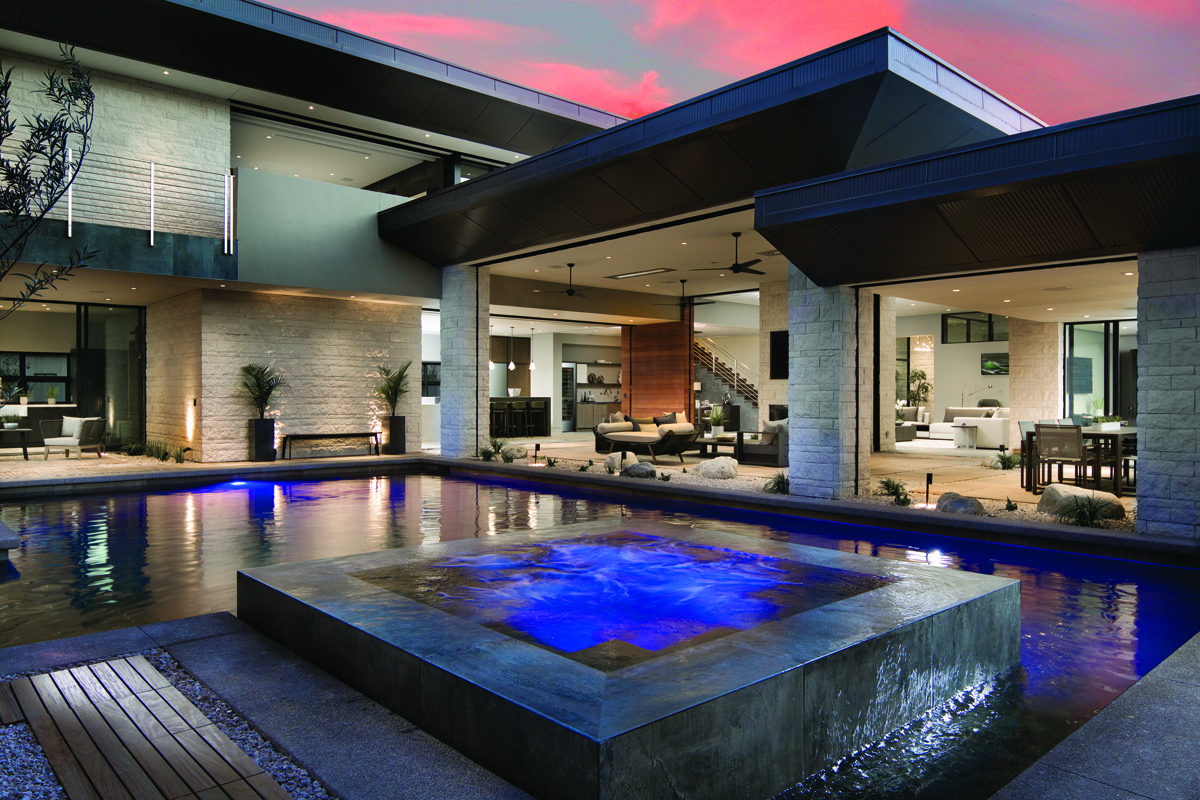 Contemporary has become the most popular architectural style, but mid-century modern and modern farmhouse are still “incredibly popular across the country,” according to judges, in new homes, but also renovations that bring out a home’s original character. Black window frames are another highlighted trend. Available in almost all price points, equally adaptable and transformative for interiors and exteriors, they easily could be viewed as design’s latest Swiss army knife. They inject an industrial sensibility to some spaces, particularly kitchens, while seemingly elevating the overall design of others. No matter the style, contemporary to traditional, they appear apropos. “Black metal windows have been hot for a few years, and I don’t see that going away in the near future. The black metal looks great in a more traditional house,” says Phil Kean, whose eponymous Winter Park, Florida, architecture-design-build firm was named “the best custom home builder in the U.S.” last year by Home Builder Digest. Kean has also designed and constructed more than one New American Home for NAHB. Using the example of a traditional Georgian-style home, he says, “Put big black windows in it and do white brick and it has a fresh feeling, and it almost seems contemporary.”

Brass and gold accents are only one indication of the ways in which interiors are being revamped. Bouclé, a nubby wool fabric, prevalent in the 1980s, was very much in evidence at this year’s Maison et Objet in Paris. “It was basically on all the furniture.” Says Gendelman. “Things are getting slowly warmed and layered,” says Ariella Duker, Gandelman’s partner at A-List Interiors.

Instead of the sterile, monochromatic look recently in vogue, shapes are organic with more curves. Texture continues to be important, but color is back in a big way. Expect to see neutrals continue to edge into warm tans, beiges and creams.

“We have always used neutrals as a foundation for the home to create flow. We still use quite a bit of gray, but both in my office and in the design world we are starting to see warm grays and taupe and brown as the neutral foundation,” says Jeffers, whose recent book “Be Bold” tackles color and other aspects of bespoke interiors. “Color seems to be back with a big bang! Emerald greens, fuchsias, periwinkles, aubergines. Strong, demanding color is everywhere.” 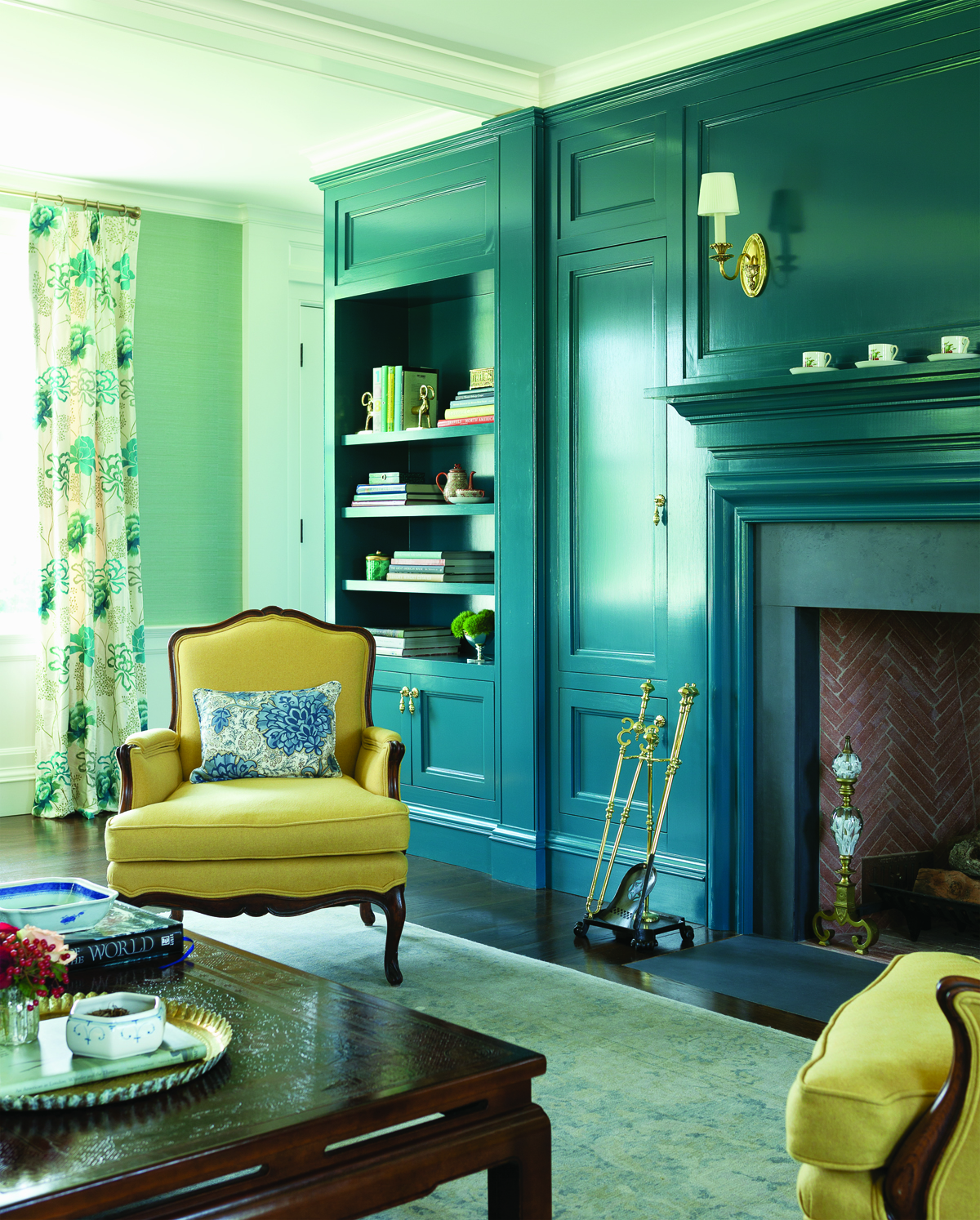 Henderson sees growing enthusiasm for vintage pieces, which he says, are fetching super-high numbers at auctions. “They add a lot to the warmth and start to make a place feel more relatable, more comfortable. It’s a level of warmth and nostalgia that is hard to achieve when everything is fresh out of the box.”

Antique pieces are even finding a place in the kitchen, where they inject authenticity and personalization. “The kitchen continues to be the social hub, the center of the home with multiple activity centers and open plans with delineated spaces,” said designer and educator Mary Jo Peterson, speaking to designers and architects at the national kitchen and bath show. 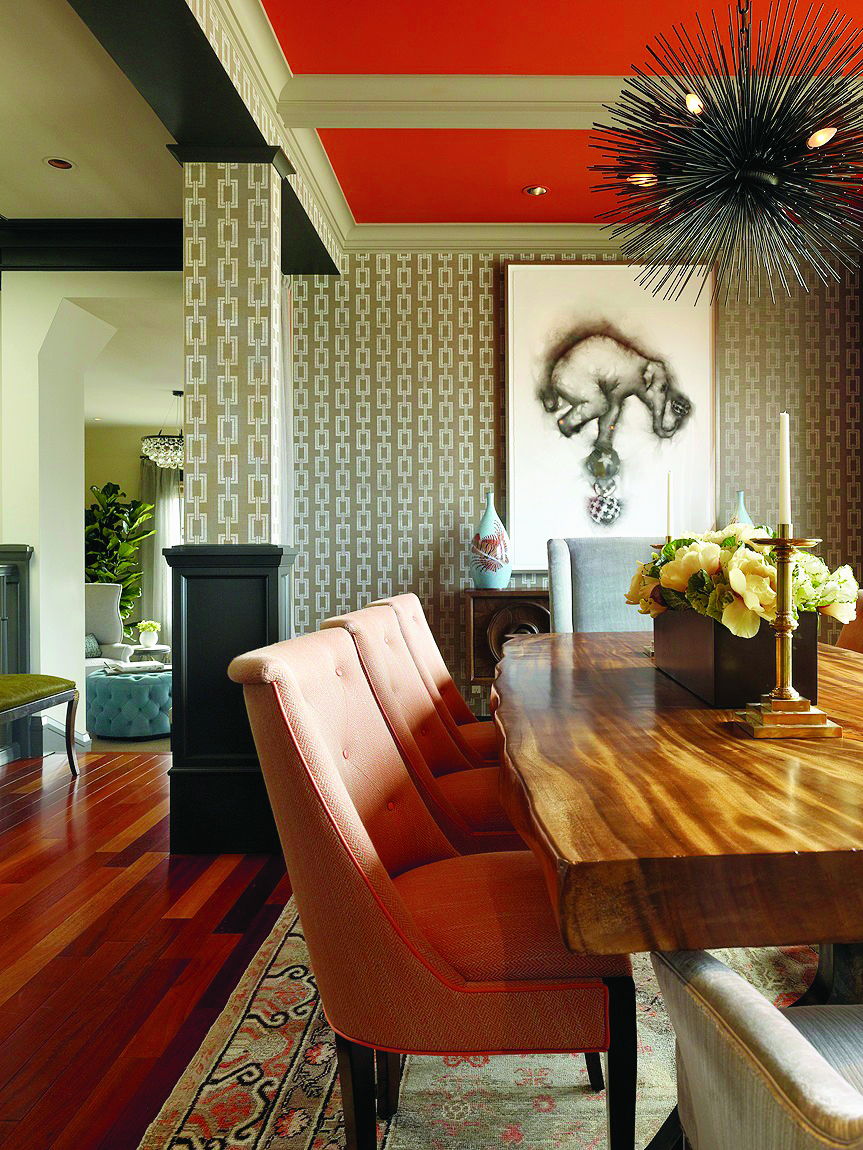 Also, adds Henderson, the demand for vintage and color is an indication that “people are becoming more confident in their expression of their homes.”

Technology took center stage in Las Vegas during Design and Construction Week. The biggest change for tech, according to technologist Ryan Herd, owner of 1 Sound Choice, is the way things are being integrated and further “knitted together.”

Increasingly, smart responses in the home are enhanced with predictive behavior so when one arrives home or voices a command, a series of events such as turning down or off lights, setting temperatures, turning on/off security systems ensues. These smart scenarios have been predicted for years, but the “knitting together” is making the process consumer friendly and intuitive. No longer considered an amenity for upscale properties, technology is expected, especially to control shades, temperature, music, security and many other functions.

Regarding technology, Jeffers sounds a note of caution for clients. “Maintaining a ertain threshold of technology is important. It’s easy to have smart everything these days. My clients don’t want a refrigerator that tells them to order milk, but they do want to be able to easily adjust lighting and music throughout the home. It is easy to go crazy, especially in the Bay Area, but the technology changes so fast you’ll be obsolete in a year. My advice: other than speakers and keypads, keep everything else out of the walls! An iPad® in your wall instantly dates your home.”

What’s New and Next

New this year? Wellness tech, in a whole house system that integrates with a home’s overall smart system, demonstrated in a concept house in Henderson, Nevada, designed by KB Home. Darwin, a smart system developed by wellness pioneer Delos, continuously monitors air and water quality via sensors built into walls. Rather than simply observing, Darwin responds to changes, adjusting air quality even in a single room. Owners are alerted to water leaks and can respond remotely via tablet or
smart phone. Several other manufacturers, including Moen, introduced products that address water leaks.

Function has become as important as looking good for consumers, a desire Beverly Hills designer Christopher Grubb says he first saw at shows in Europe as early as 2017. “It took this long for Americans to catch up with the Europeans,” he adds. As soon as clients experience organizers in drawers and behind cabinets, he says they want more. “What happens with organization is it helps people focus on need. It’s not so much taking away; rather, organization makes someone more conscious of, ‘Do I need this?” 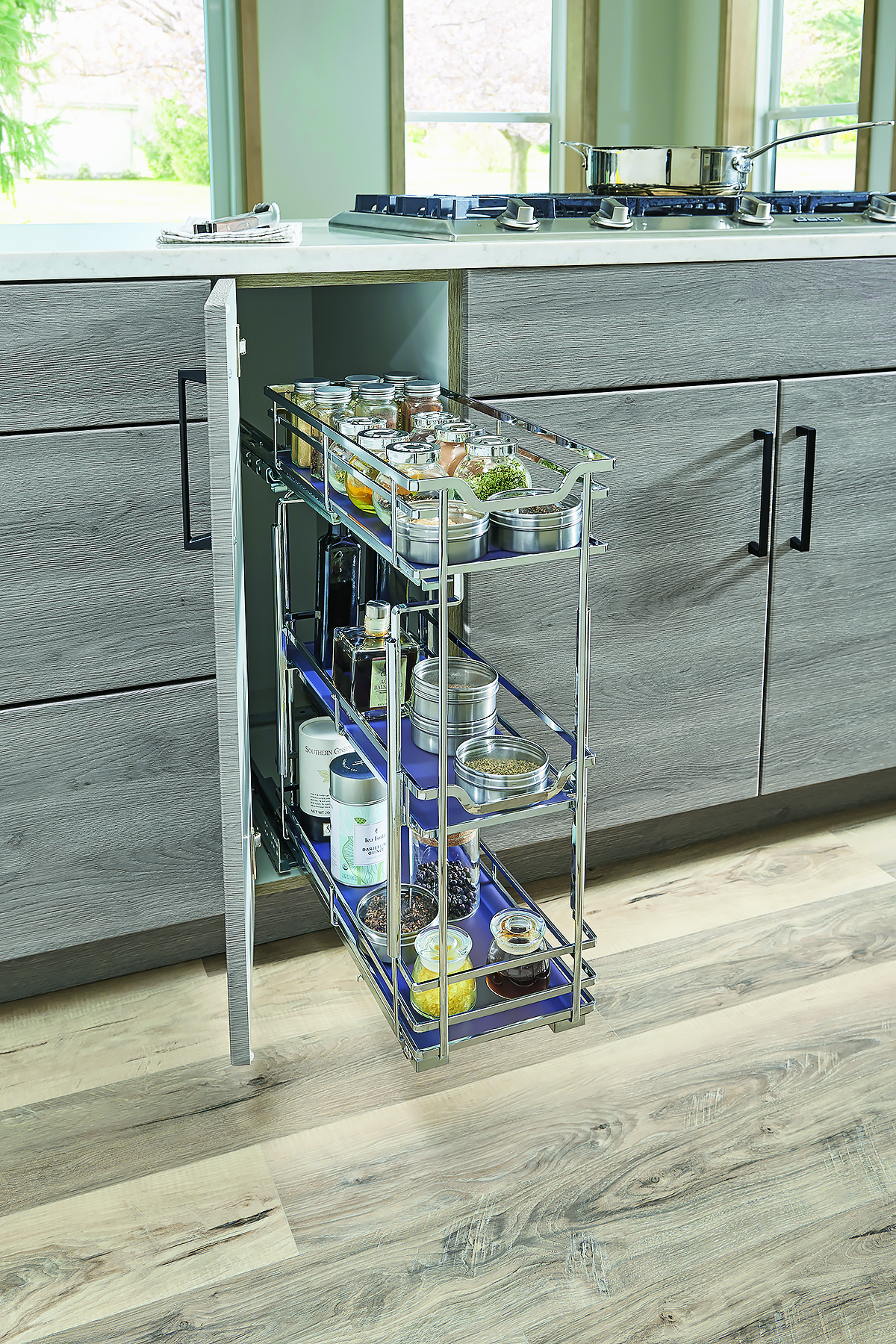 Double islands, multiple pantries, and secondary kitchens are enhancing functionality of kitchens and expanding the role of this space as a social hub. It’s not uncommon to find flush doors on cabinets open to a place for countertop appliances and an additional workspace. “Using tall bi-fold doors to hide a work station is a huge trend,” says Jennifer Gilmer, founder of Jennifer Gilmer Kitchen and Bath in Chevy Chase, Maryland. “I saw this at the Eurocucina show in Italy over three years ago and am glad to see this idea finally catching on.” Also, she says, the nice thing about this strategy is it helps eliminate wall cabinets. Phil Kean takes the concept a step farther with cabinets that open to hidden pantries and even hidden rooms. 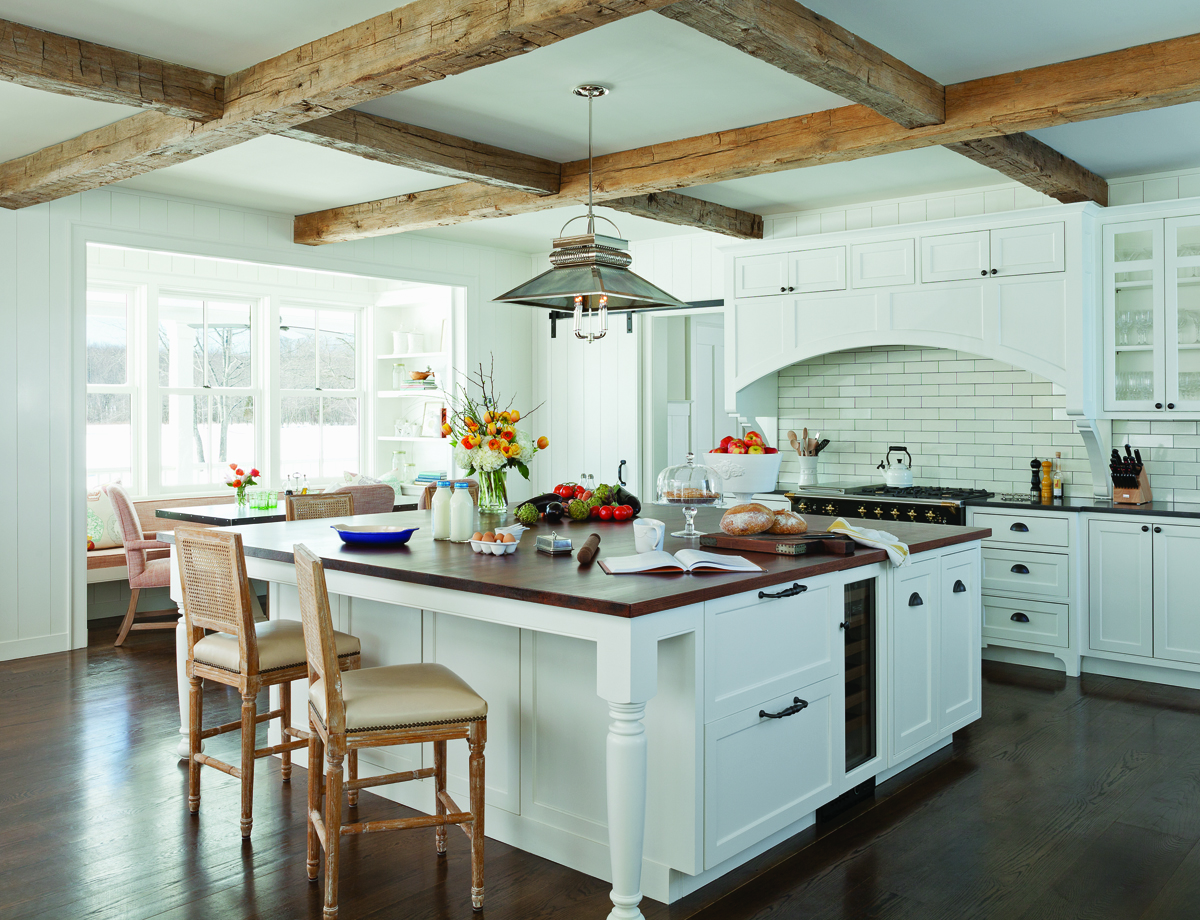 What’s on the horizon for home? Wet bars, wine bars, even smoothie bars are in demand almost everywhere, say designers. Also, look for “Amazon® rooms” (per Kean) as architects strategize ways to secure deliveries without compromising overall home security. Storage and more storage in all the right places will continue to enhance function, making a home truly in sync with an individual’s lifestyle.