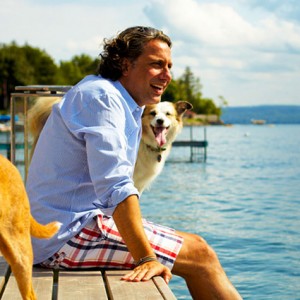 Design expert Thom Filicia has many infectious mantras such as “Love where you live,” “Clashing is dashing” and “every room needs a surprise” and most recent fan favorite “Ix-nay the acky-tay.”

After conquering and converting the design-challenged male homeowner in the 2003 television hit series Queer Eye for the Straight Guy, Filicia went on to channel his uncanny ability to nurture the inner design soul — turning it from frump to fabulous in the equally popular TV hit Dress My Nest.  “My goal in that series,” says Filicia, “is to ensure that women are rocking their interiors with the same creativity and confidence they bring to their wardrobes.”

But while Filicia’s democratic design mission is, as he puts it, “to help stamp out boring, unimaginative interiors,” he has raised the challenge bar even higher with yet another TV series: Tacky House.  Here, the homeowner — whether he or she is residing in a domain only a leprechaun could love (complete with kelly-green carpets and walls) or in a leopard -themed, gone-too-wild abode (“This one really needed being taken down a notch,” says Filicia diplomatically) — was unsuspecting, believing they were appearing with Filicia in the fictitious show My Awesome Home.

When the news is first revealed that friends and family have actually nominated them for renovation, not celebration, you’d think matters would quickly turn chilly.  But that’s when Filicia crosses the threshold — and just in time.  Equal parts best friend, therapist and tough-love taskmaster (especially when it comes to an over-abundance of black lace in the bedroom, plastic flowers in a living room or Las Vegas-casino decor in a garage), Filicia eventually tames and transformed the tacky to the tasteful.

“It’s not about making them feel bad about themselves or their home,” he is careful to point out.  “It’s about making sure they’re presenting the best and most honest portrayal of themselves through their rooms.  It’s always good spirited.  And television is so great.  It forces me to be hyper creative.  And it’s made interior design accessible to a whole new group of people.”

But lest you think this decorator’s M.O. is all about bright lights, ratings and leopard-spot ratio, it’s important to note that Filicia can balance both ends of the styling spectrum with the deft flip of a fabric swatch.  So while he very much enjoys the makeover process from mass to class, he has been — and always will be — every inch the acclaimed interior designer.  Having overseen his namesake, thriving Manhattan design firm for more than 14 years now, Filicia has created glamorous, livable spaces for the likes of Jennifer Lopez, the W Hotel chain and the United States VIP Suite at the World’s Fair in Aichi, Japan.  It’s clear after seeing one of his signature spaces (which always soothes the eye as much as it delights) that Filicia’s design experience is deeply rooted.

Having grown up in the historic Sedgwick Farm neighborhood in upstate New York, (his favorite bedtime story being Dr. Seuss’s Come Over to My House), Filicia went on to nab a degree in interior design from Syracuse University and then secured the most prestigious and invaluable graduate work a budding designer could hope for: as a junior designer with the legendary firm of Parish-Hadley.  “I’m incredibly lucky that the late Albert Hadley was my first boss,” says Filicia.  “As one of the leading designers of the last century — with clients like Jackie Onassis and Babe Paley — he helped shape my aesthetic and showed me that rooms could be chic as well as comfortable.”

For the late Hadley —  who wrote the foreword to Filicia’s first book and indispensable guide, Thom Filicia Style, there is mutual admiration: “Thom’s well-mannered personal style embraces with clarity a fair measure of a sometimes wicked wit.”  And while Filicia’s charms always entertain, it’s his serious commitment to his craft that keeps the many spokes of his business humming with synergy.

In 2010, the designer launched the Thom Filicia Home Collection (with Vanguard Furniture), which consists of furniture for every nook in the house.  “I’ve been designing custom furniture for my private clients for many years,” he explains, “so I’m thrilled to now be able to offer consumers across the country pieces that, hopefully, empower them to express themselves through fun, classic and bold furnishings.

I want my designs to be evocative and practical.”  So while the Thom Filicia brand keeps growing, it never loses sight of its initial focus: I’ve only always been interested in how people live,” he says.  “It’s not just about the thirty-thousand-dollar dining room table.  It’s about creating interiors that reflect the spirit of who lives there.”

2. Pair of Red Lacquer Stools in the Manner of Jean-Michel Frank offered by Jonathan Burden