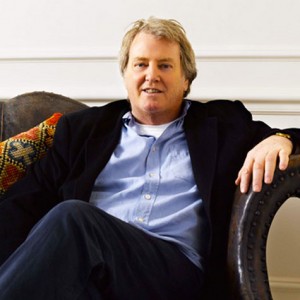 He is the favorite decorator of the Prince of Wales with a royal warrant to prove it. He is known as the designer commissioned to both rejuvenate Highgrove House—the bucolic Gloucestershire house of Prince Charles and the Duchess of Cornwall—and Clarence House, previously the stately London home of the late Queen Mother and now the official residence of the Prince, his wife and his son Prince Harry. But Robert Kime would consider it the height of bad taste to say so himself. That’s because he is undoubtedly the most modest man in interior design. Quiet-spoken, quietly dressed and unmoved by the current culture’s obsession with celebrity, he is perfectly anonymous in London Street—and that’s how he prefers it.

His premises on Museum Street, close to the British Museum, comprises of a 17th century house, full of original period features. (He also has a shop across town, where Kensington meets Notting Hill.) Upstairs is his pied-à-terre, a bonsai version of the Museum, filled as it is with all manner of precious and quirky objects. On the lowest two floors (and spilling into an adjoining building) is a collection of furniture, rugs, paintings, lamps and curiosities, all for sale and all chosen for one reason: Kime likes them. The place is not so much a shop as a series of small room-settings— an expression not only of taste but also of personal philosophy. If you really want to understand the man, the best way to do so is by looking, not asking.

When you do, you’ll note that Kime doesn’t so much design a room as curate its metamorphosis. As part of this process he runs the three arms of his business: interior decorating, antique dealing and creates his own ranges of beautiful hand-crafted fabrics (weaves, ikats, prints and embroideries based on historical documents)—in tandem. There is not, and never has been, a business plan. (Kime’s has also never switched on a computer, sent an email or joined a social-networking site.)

For his interiors, Kime doesn’t pedal a particular look; in fact, the idea is anathema to him. “I absolutely hate over-controlled decoration. Here you may find a piece of prehistoric tree trunk next to some shipwrecked plates, or the lining of an ikat coat next to a beautifully woven rug,” he says. “When I buy something, I always ask myself the question that Piers von Westenholz used to ask when we ran a shop together: ‘If it doesn’t sell, could I look at it forever?’ “

As for the textiles, that collection came about because “I needed fabrics for a job and couldn’t find what I wanted anywhere else,” Kime says.  “Like everything I do, they are really about creating an atmosphere, making people feel comfortable.”

Comfort is the baseline for a Robert Kime room, but not of the obvious deep-sofa-extra-padded-cushions variety. Comfort for Kime means the layering of color, texture, patina and pattern; it’s the conversation that takes place between objects and art from different corners of the globe and various points in history. His favorite buys are those that come with the suggestion of a story. “I love things that are romantic in the Walter Scott sense, “ he says. “That’s more important than just another piece of design.” One day recently, Kime was bidding by phone at a country auction for several lots, including a late 16th-century silver gilt tankard from Augsburg, Germany. In the catalog, the tankard was said to have been part of a secret cache, most likely hidden by its owner during the Thirty Years’ War and not rediscovered until 1967, more than three centuries later, when the house in which it had been sequestered was demolished. “I wouldn’t even mind if that tankard was all based up,” Kime says. “I love that this was someone’s treasured possession, and he thought he must save it, but then he never went back to claim it.” He adds, “Not everything we sell has a story, but everything must suggest an atmosphere.”

Kime studied history at Worcester College, Oxford, in the 1960s, specializing in the medieval period, particularly the Crusades. He dealt in antiques throughout his university years, selling mainly to dons and their wives. “My stepfather wouldn’t pay my grant and I had to make some money,” he explains. “My grandfather gave me an old Post Office van, which cost £20—he said I should always buy these vans because they were very well-serviced and maintained—and every Thursday I would go around the Cotswolds scouring the junk shops and antique emporiums. In those days, you didn’t have to leave the country to find interesting things, and I made a perfectly good living.”

After Oxford, there was a brief period at Sotheby’s where he specialized in antiquarian books. But he never enjoyed working for someone else and soon went back to antique dealing as a way to make his living. He married in his mid-20s to the author and publisher Helen Nicoll and soon there were two more mouths to feed—son Tom and daughter Hannah. The family settled near Marlborough, in Wiltshire, where Kime opened his first shop (and where he’s still mostly based). He cites Geoffrey Bennison, the legendary director and antiques dealer, as one of his most important early influences. “He was the first person who said, ‘I haven’t come to see your shop, Robert, but to see your home,’” Kime recalls. “He completely saw the point of how I wanted to live.”

Kime’s ability to create interiors that appear timeless has won him many notable clients, including Juicy Couture co-founder Gela Nash-Taylor, theater producer Sally Greene, film producer David Puttnam and Andrew and Madeleine Lloyd-Webber for who he un-“blinged” an apartment in New York’s Trump Tower. Most recently he was the designer of choice for the refurbishment of the Gunton Arms Inn in Norfolk, which is rightly attracting worldwide press for its very English blend of dog-friendly antique furniture, rich textiles—including Kime’s own—and fine art (the owner is colorful art dealer Ivor Braka).

It was a word-of-mouth introduction that brought him the prestigious commission of refurbishing Highgrove, the private home of Prince Charles, after his high-profile divorce. The Prince’s scholarly taste for classical architecture of a bygone era is well documented, and no doubt he felt he had found a kindred spirit in Kime. When the Prince later took up residence in Clarence House, after the death of Queen Mother in 2002, he and the Duchess of Cornwall again turned to Kime for help.

At Clarence House, Kime had a fine line to tread between helping the couple create their own establishment and allowing them to respect the palace’s provenance as the former home of a much-loved Queen Consort. The result was an undoubted triumph. “I think the biggest compliment was people who had known the Queen Mother saying they did not know why it attracted so much media attention, because nothing had changed,” Kime says. “In fact everything had changed.” The fact is that Clarence House had not been touched since 1952. Kime chose new paint colors, new carpets and had free rein to move the existing furniture and paintings around to give it a whole new feel. At the time he said the biggest challenge had been “knitting Prince Charles in with his grandmother,” because the house and the collection were so associated with her in the British public’s mind.

He has described the Prince as an “incredibly supportive” client and one with whom he clearly has an affinity, not least because they are both so passionate about Oriental textiles. However, he is never going to fracture their relationship by going on the record with anything that could be construed as “chasing in,” so questions that he deems vulgar are politely but firmly refused.

Comfort was, as ever, the driving force behind his Clarence House design. “If you have a view of it being a palace, you are sunk,” he says. “The part that is on-view to the public had to be slightly monumental, because it is an official residence, but I also wanted to create an atmosphere where one can carry on an ordinary conversation with the Prince without feeling over-awed. It had to be as comfortable for the gardener to sit down and talk to him as for the Queen of Spain to do so.”

Now 67, Kime has recently decided to scale back the design side of the business, preferring to focus on his efforts on the three days he spends each week at Museum Street. While he has lost none of his enthusiasm or gift for buying and selling the things he loves, it is the siren call of the British Museum down the street that makes his time there so rich. “I go there at least once a week, sometimes more,” he admits. “Oxford taught me I was not a scholar—I really could not sit in the library for eight hours at a time—but I never tire of looking at objects that inform me of the past.”

3. One of a pair of German Neoclassical iron chairs, offered by Glen Dooley Antiques