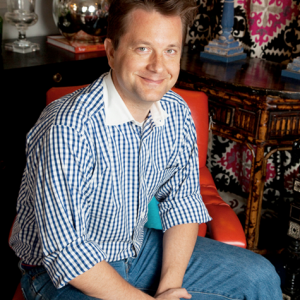 “You have a grown-up shop now,” Suzanne Rheinstein told her friend and Los Angeles design colleague Nathan Turner late last year as she surveyed his new digs on tony Melrose Avenue, where the showrooms of legendary designers Rose Tarlow and Michael Smith are both within an (artfully chosen) stone’s throw.

“I knew exactly what she meant,” says Turner, who since 2002 had been selling his design treasures out of a charming but cramped 1930s bungalow on nearby North Almont Drive.  “Almont was sleepy and sweet.  Melrose feels big time.  People actually stroll down the street here, which means something in LA.”

Up and running since November 2011, the new loft-like store encompasses almost 2,500 square feet of open space that still feels intimate, with a mood more residential than retail, reflecting Turner’s clean, modern take on bohemian chic.  It’s filled with such vintage finds as a French Trumeau mirror from Toulouse and a pair of English rooftop finials made into lamps; graphic fabrics from the Carolina George textile line; oil paintings featuring West Coast landscapes that Turner, a fourth-generation Californian, loves; and nature-inspired pictures from famed interiors photographer Oberto Gili.  Interspersed throughout is Turner’s own collection for Elite Leather, which includes his best selling clean-lined Spencer sofa and classic low-tufted Flores chair (which is based on a pair of ‘20s club chairs Turner once found in Argentina).  “Everything here,” explains Turner, “has somehow captured my eye.”

Turner frequently turns that eye toward residential design projects.  “I got my start as an interior designer because people kept coming into the shop and asking me to make their homes look exactly like it,” says Turner.  On his current roster is a palatial beach house in Bali and a classic 1930s Hollywood Regency home in Bel Air, where he says he’s “mixing in some funk with the traditional.”

Turner’s soft-spoken, affable nature and effortless style have many admirers.  Chief among them is Mary McDonald, who Turner first met at Hollyhock, Rheinstein’s Los Angeles design shop.  Or rather, first heard: “I had just moved to LA from Manhattan, and I hardly knew anybody,” says Turner, who left New York in 2002 after not being able to find the right location for a home shop there.  “I heard this exuberant laugh and had to find its source: it was Mary.  I walked right over and told her she was fabulous.  By the next week, we were having sleepovers at each other’s houses with my lab and her four pugs.”

Turner and McDonald’s BFF rapport has been showcased on the first season of Bravo’s swanky “Million Dollar Decorators,” which also stars fellow glam mavens Martyn Lawrence Bullard (whose flooring collection is featured in Turner’s shop), Jeffrey Alan Marks and Kathryn Ireland – who has set up her own shop in Turner’s old spot on Almont.

His star is rising and his store is bustling, but Turner has no desire to scale up his design business.  “I like being a small operation,” he says.  “My favorite time is the end of the day when my store is quiet and I can work on my projects.”  When he finally closes shop, he heads for his nearby home, a mid-century modern house filled with his favorite antiques.  He spends weekends in the Malibu beach house he shares with his partner, Eric Hughes, a former studio executive at Universal and now an acclaimed designer himself, thank to homes he has fashion for Sarah Jessica Parker and Kate Winslet, among others.

We entertain in a big way,” says Turner, whose first life-style book will be published in the fall by Abrams.  “I love to cool and I love themes.  We recently did an Indian fantasy dinner complete with thousands of marigolds we found thanks to an Indian –wedding planner.  Another fun one was a Moroccan sit-down dinner for 36 underneath a tent I made out of white gauze.  My decorating style tends to be more subdued, so I like to really go for it on the party front.  Because it’s for only one night, why not be bold?”

One staple always on hand, whether he’s celebrating, decorating, or keeping shop?  Antiques.  “They’re a necessity,” Turner says.  “I’ve always been a big fan of history and love that antiques bring that to a room.  They add soul like nothing else can.  I can sit in the shop all day daydreaming about where the things I love have been.”